The group stage of the FIFA Women’s World Cup 2019 is over and now finally the first games of the knockout stage took place. After the match Germany vs Nigeria, Norway vs Australia was the second clash in the round of the last 16.

Everyone expected a tight game and that’s exactly what we witnessed. Both teams scored one goal during the 90 minutes and the extra time was goalless. So, the penalty shootout had to declare the winner and Norway were able to win it and go through to the quarter-finals. This tactical analysis will show why neither Norway nor Australia were able to beat their opponent during regular and extra time. 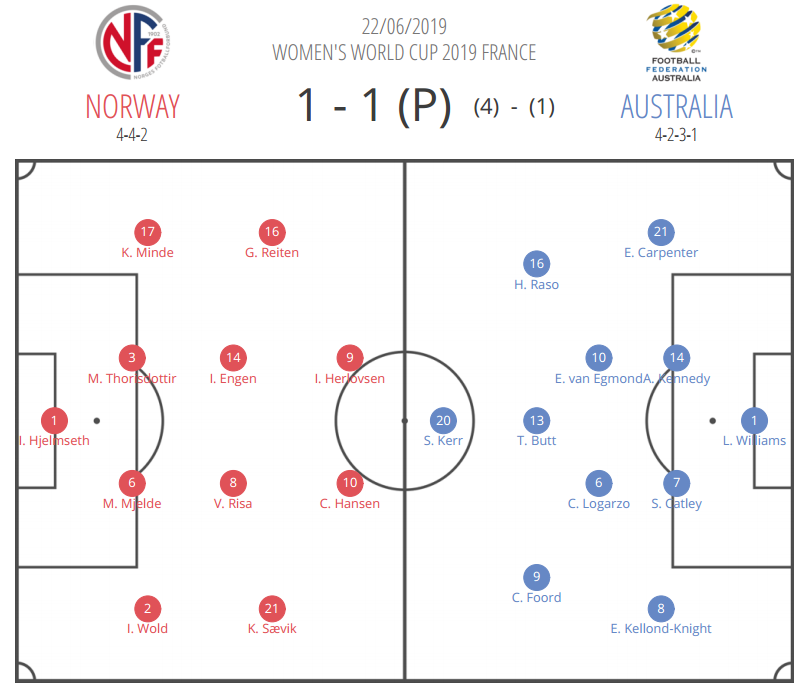 Martin Sjögren lined up his team in their usual 4-4-2 formation. However, compared to their last game of the group stage against South Korea, Caroline Graham Hansen played upfront beside Isabell Herlovsen and not on the right wing.

Ingrid Hjelmseth was the goalkeeper and the back four in front of her consisted of Ingrid Wold, Maren Mjelde, Maria Thorisdottir, and Kristine Minde. The central midfield was occupied by Vilde Bøe Risa and Ingrid Engen.

Guro Reiten and Karina Sævik were the wingers and as already mentioned, Graham Hansen and Herlovsen were the strikers.

On the other side, the Matildas played with a 4-2-3-1 which looked during the game like a 4-3-3 formation. Lydia Williams was between the sticks and Elise Kellond-Knight, Stephanie Catley, Alanna Kennedy, and the young right-back Ellie Carpenter formed the back four. The midfield was made of Tameka Butt, Emily van Egmond, and Chloe Logarzo. The star of the team, Samantha Kerr was the central striker and Caitlin Foord as well as Hayley Raso occupied the wings.

When Australia were in possession, their 4-3-3 formation was clear to see. The full-backs positioned very wide and Van Egmond stayed deep to create a passing option for the two centre-backs Catley and Kennedy. Butt and Lograzo positioned high and mostly tried to find themselves between the opposing lines.

The Matildas tried to build up from the back with short passes until they found a way through the opposing defence. As later explained, Norway used high pressing in certain situations. Even then, Ante Miličić’s team tried to find a way out of it with passing combinations.

However, most of the time, there were no vertical passing options for Australia’s defenders and the deep positioned Van Egmond. The two other central midfielders Butt and Logarzo, as well as the three forwards, were positioned so high, that there was no connection. In light of this, they passed around the ball at the back with no option to get higher up the pitch and so they decided to play a long ball.

Norway’s defence was able to defend these long balls most of the time. However, on several occasions, the Matildas got into the area where the wanted to be: the flanks. From there they tried to find Kerr with crosses but Mjelde and Thorisdotter were too good in the air and had numerical superiority.

Sjögren’s team is incredibly flexible when it comes to defending. In this game, they either used an extremely aggressive and high pressing or they sat back in their narrow 4-4-2 and lured out the opponents.

As already explained, Australia tried to solve the situations in which Norway put pressure on them with short passes. However, sometimes the pressing was so well executed, that the Matildas lost the ball deep in their own half. Because of that, Sjögren’s team had some great goalscoring chances but never managed to get something out of it.

But everyone who ever watched Norway during this FIFA Women’s World Cup knows about their 4-4-2. Also, in this match, they left the possession to Australia and sat back. They occupied the centre so well, that Australia played the ball onto the flanks. Even though the Matildas wanted to be exactly there, they almost never managed to get out something of it since Mjelde and Thorisdottir defended so well against Kerr in the centre.

In these situations, they lured Australia out and created space for Herlovsen, Graham Hansen and the other Norwegians for counter-attacks. In these occasions, Graham Hansen is an incredible weapon due to her speed and ability to dribble past defenders.

Same as Australia, Norway likes to find themselves in the wide areas and create goalscoring chances from there. Because of that, either the wingers shift in to create kind of a 4-2-2-2 and the full-backs push forward or the full-backs stay deeper to get included into the build-up and the wingers occupy the wide areas. As soon as someone on the wings is on the ball, they either played a diagonal pass behind the last line of the opposing defence or they tried to find someone in the half-space like in the image below.

The 1-0 for Norway was a result of such a diagonal pass behind the opposing defence like explained above. Sævik received the ball on the right wing and Herlovsen made a perfectly timed run behind the last line of defence of the Matildas. After the great pass from Sævik, she beat Williams in the one-on-one and scored the first goal of the game in the 31st minute.

Much space during extra time

Since Norway was too passive at the end of the regular time, Australia managed to score the equaliser in the 83rd minute. Considering this, the winner had to be declared in extra time. It was noticeable that both already played three matches in the group stage and that the game was on a very high level. So, both teams ran out of energy and weren’t able to defend as disciplined and compact as in the previous 90 minutes. Due to this, there was a lot of space on both sides and therefore many goalscoring chances.

Especially after the red card against Kennedy in the 104th minute, Norway had enough chances to score the 2-1. However, also due to the lack of stamina after this intense clash, the shots weren’t that precise anymore and so there was no other goal. As a consequence, the penalty shootout took place and Norway was able to secure the win.

After their disappointing performance in the last match of the group stage against South Korea, Norway showed a great performance in this second game of the round of the last 16. They deserve to be in the quarter-finals, but you also have to give credit to Australia for their strong performances during this FIFA Women’s World Cup.

Norway will play against either England or Cameroon in the quarterfinals. It will be interesting to see if their upcoming opponent can find a plan to break down their well-organised defence.