The FAWSL returned after a brief interruption and one of the more highly anticipated games of the weekend was Manchester City Women vs Tottenham Hotspur Women. The pre-game talk was centred around Spurs’ new superstar signing Alex Morgan, however, the American striker is still short of match fitness with the City game coming too soon. However, there’s been a sense of optimism behind Spurs this season with their new signings in the hope they can kick on to a higher placed finish. City come in on the back off a timid start to the season including a win and draw to Brighton & Hove Albion Women. The outcome of today’s game saw Manchester City thrash Spurs 4-1 in what ended in a comfortable victory for the Citizens.

This tactical analysis will look to detail the tactics behind Graham Taylor’s emphatic win and the reasons why Tottenham Hotspur Women failed to score.

The lineups threw a couple of surprises with Lucy Bronze on the bench for the hosts with the impressive teenager Esme Morgan taking her place at right-back. Georgia Stanway, Jill Scott, and Rose Lavelle joined Bronze in a very strong bench. Lavelle’s inclusion was a welcome sight for City fans as they were able to get a first glimpse at their summer signing from Washington Spirit. Sam Mewis has made a bright start to her City career and made up the midfield alongside Caroline Weir and Keira Walsh.

Spurs made three changes with Siri Worm, Gemma Davison, and Anna Filbey were given starts ahead of Ashleigh Neville, Angela Addison, and Lucia Leon. 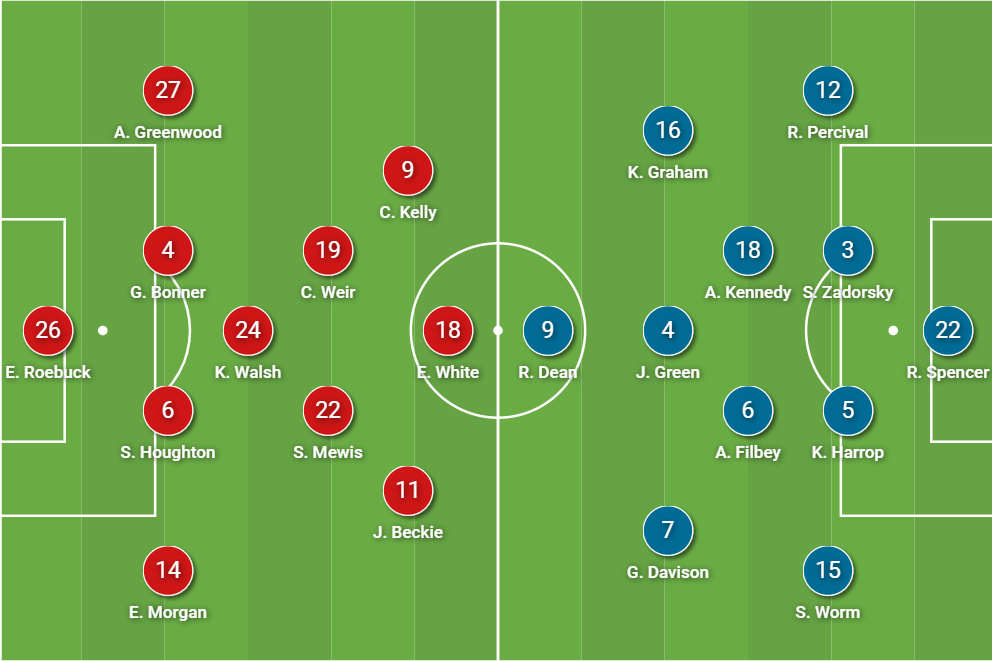 Part of Manchester City’s dominant win was thanks to their build-up play and midfield shape which led to their effective transitions into the forwards. While we’ll explore their midfield transitions later in this analysis, their build-up was important to the way they were able to achieve this. Spurs needed to stop their build-up play through their forwards by applying pressure on their central defenders. The front two worked hard and were at times successful in the first 25 minutes. Both Dean and Kit Graham both looked to put both centre-backs on the back foot with help from their two wide players to pressurise the full-backs.

Manchester City’s two centre-backs are both very good ballplayers, in particularly, Houghton who is their primary ballplayer from defence would often look to find the more advanced midfielders between the lines to not allow Spurs to consolidate by passing to Walsh. Spurs looked to press Houghton more than Bonner to stop the Manchester City captain from having free reign to pass forward which meant that Walsh was the only option. 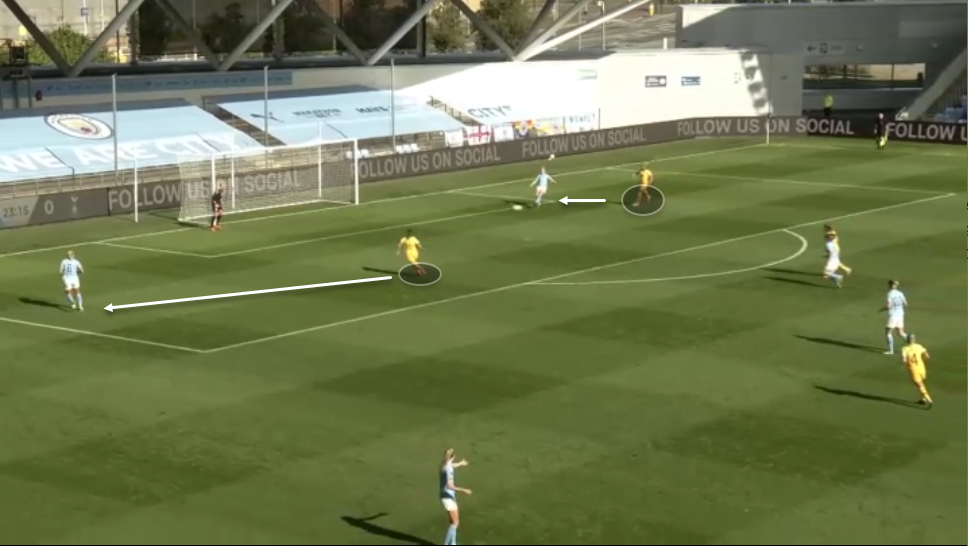 If we look at the image above, you can see how Spurs are looking to close down Bonner whilst City try to play out from the back, in doing so it forced Walsh to come deeper into the 18-yard box which separated Manchester City’s midfield and created large gaps which makes it easier for Tottenham Hotspur Women to defend in. 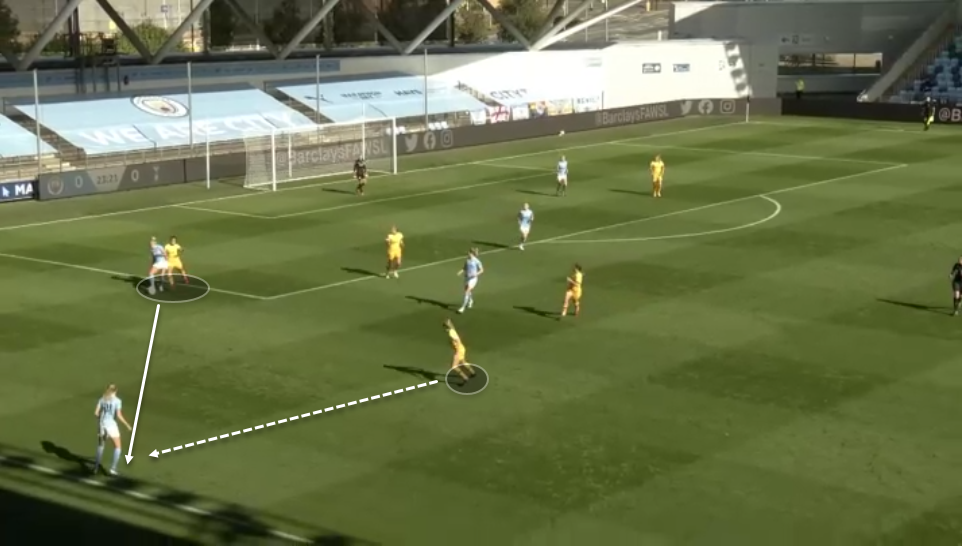 Here we can see Houghton getting pressed and when the ball goes out to Morgan, she’s unable to go anywhere because of the systematic press Spurs tried to employ. Though one of the biggest issues here was that Spurs couldn’t keep up the intensity for too long without it disrupting their midfield shape which was needed to stop City’s creative midfielders to control the game. As the game wore on, City were able to find spaces between Tottenham Hotspur’s forward press which became less and less impactful as the team slowly started dropping deeper. Houghton was then afforded the space to push out and find passes further up the pitch as is seen in the image below. 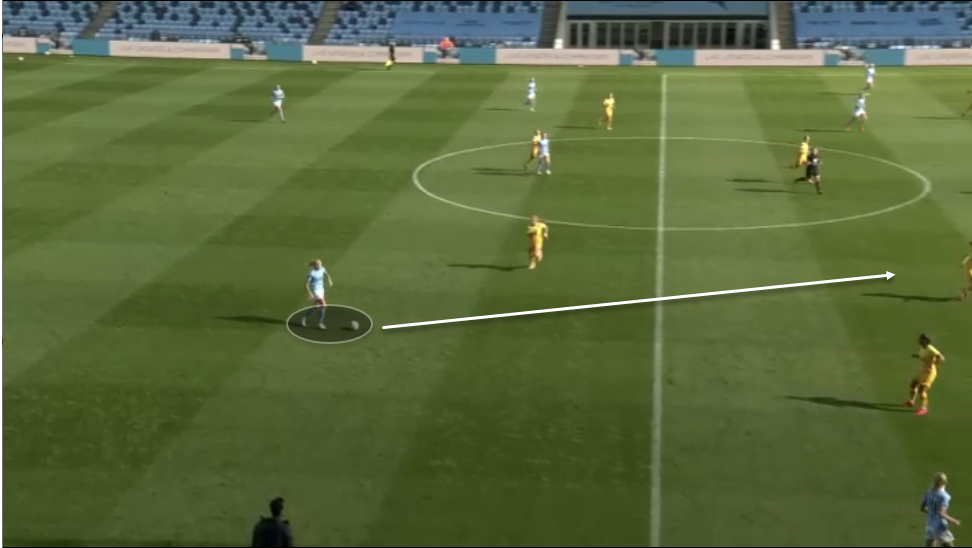 This meant that City were able to get Mewis, Walsh, and Weir on the ball which was the catalyst in assuming control of the midfield battle. While Alanna Kennedy and Josie Green were relatively good and disciplined, being pulled out of position and being overrun was a result of their forwards not able to apply constant pressure.

With Spurs actively trying to disrupt City’s play from the back, the battle for control in midfield was most crucial. Once City did get out of their defensive third, they wanted to get their three creative/box-to-box midfielders on the ball to release the three forwards. The ultimate idea was to release Janine Beckie and Chloe Kelly and create space for them in the half-spaces.

In doing so, they would allow Beckie and Kelly to move into favourable positions from which they were most comfortable, either crossing it in or cutting inside and shooting. Manchester City started with Mewis, Weir, and Walsh in midfield and the three are very complimentary of each other because of their contrasting yet complementary styles of play. Mewis and Weir are excellent ball progressors while Walsh is a creative link play at the base. Taylor’s Manchester City team would have predicted that their side would come up against a Spurs side that would be rigid in their shape, soak up pressure and attempt to hit City on the counter-attack.

To bypass this, City would look to use Houghton as a passing source, with her trying to find players in between the lines. If no option was available, one of the centre-backs would find Walsh who would then distribute it towards the other two midfielders and in turn, the wide forwards. 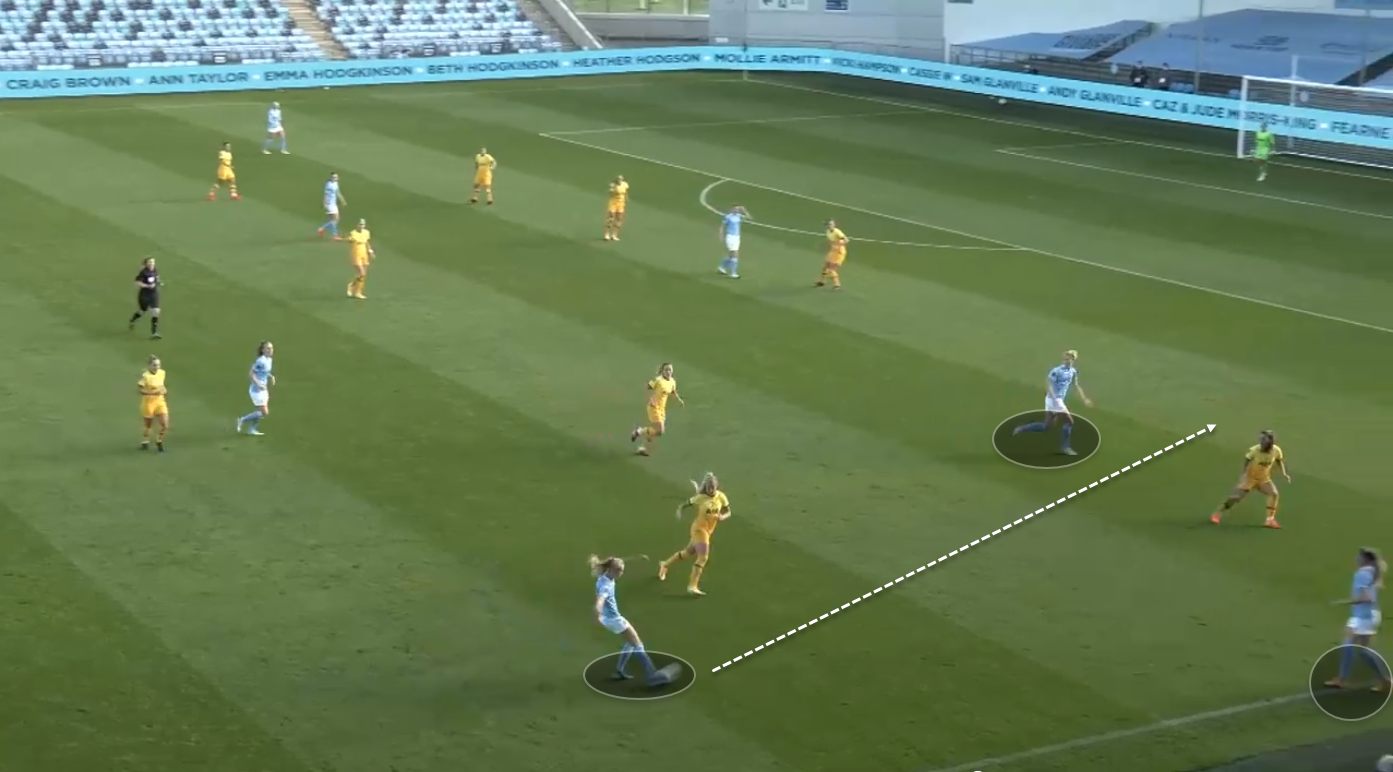 They were able to create overloads in midfield and move Spurs’ compact midfield shape by committing a full-back or central midfielder forward. This was achieved by right-back Esme Morgan tucking in becoming a faux third centre-back with Alex Greenwood pushing forward down the left, whilst Mewis or Weir would push up in the right half-space as can be seen in the below image. Beckie being a naturally wide player means that it’s easier for Mewis/Weir to play in the half-space to play her Beckie in, whilst Greenwood would be the wide player with Kelly playing in the half-space. An example of the use of wide spaces by City can be seen above where the full-back has to be conscious of Beckie and Mewis’ movement. 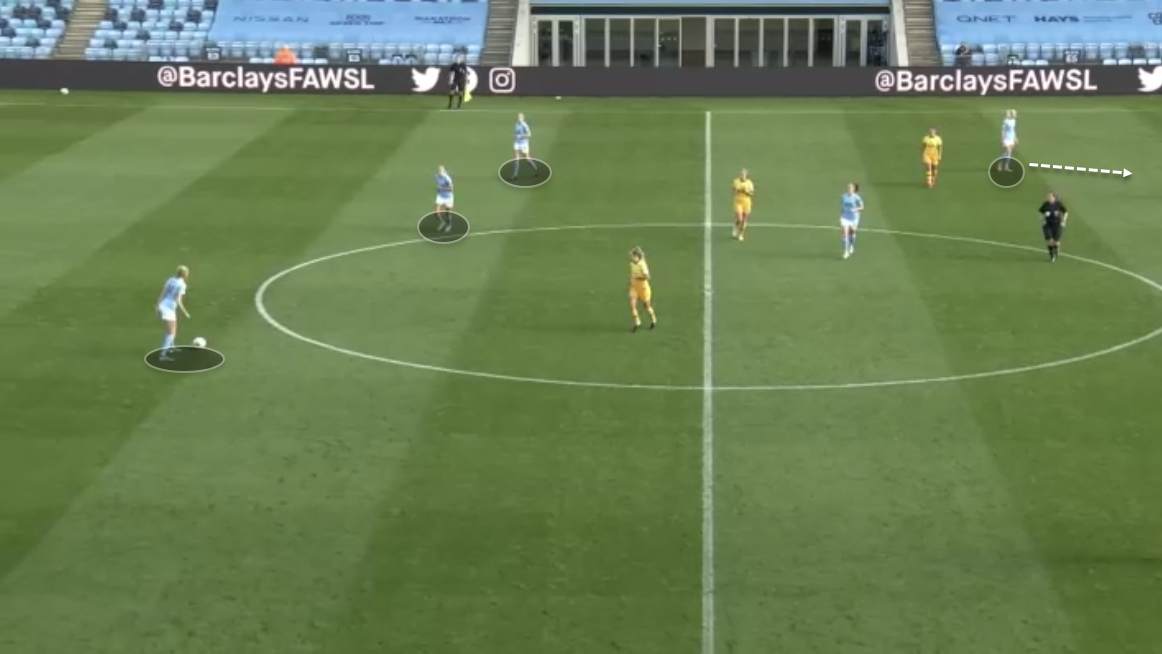 Here we can see, Houghton, Bonner, and Morgan playing as a back three whilst Greenwood has pushed up on the far side ensured numerical superiority and most crucially control. This ensured that Greenwood was afforded the space to push forward and allowed Manchester City to match Spurs’ midfield four and man for man negating their compact mid-block and give Citys midfielders the ability to create the overloads we saw earlier. Though, the first 25 minutes of the game went exactly how Spurs wanted it to go especially because City were not moving the ball quick enough which allowed Spurs to sit back in their shape and defend. Even with their numerical advantage, whenever City failed to move the ball quickly, Spurs were able to maintain their shape and block any passing lanes or advances. 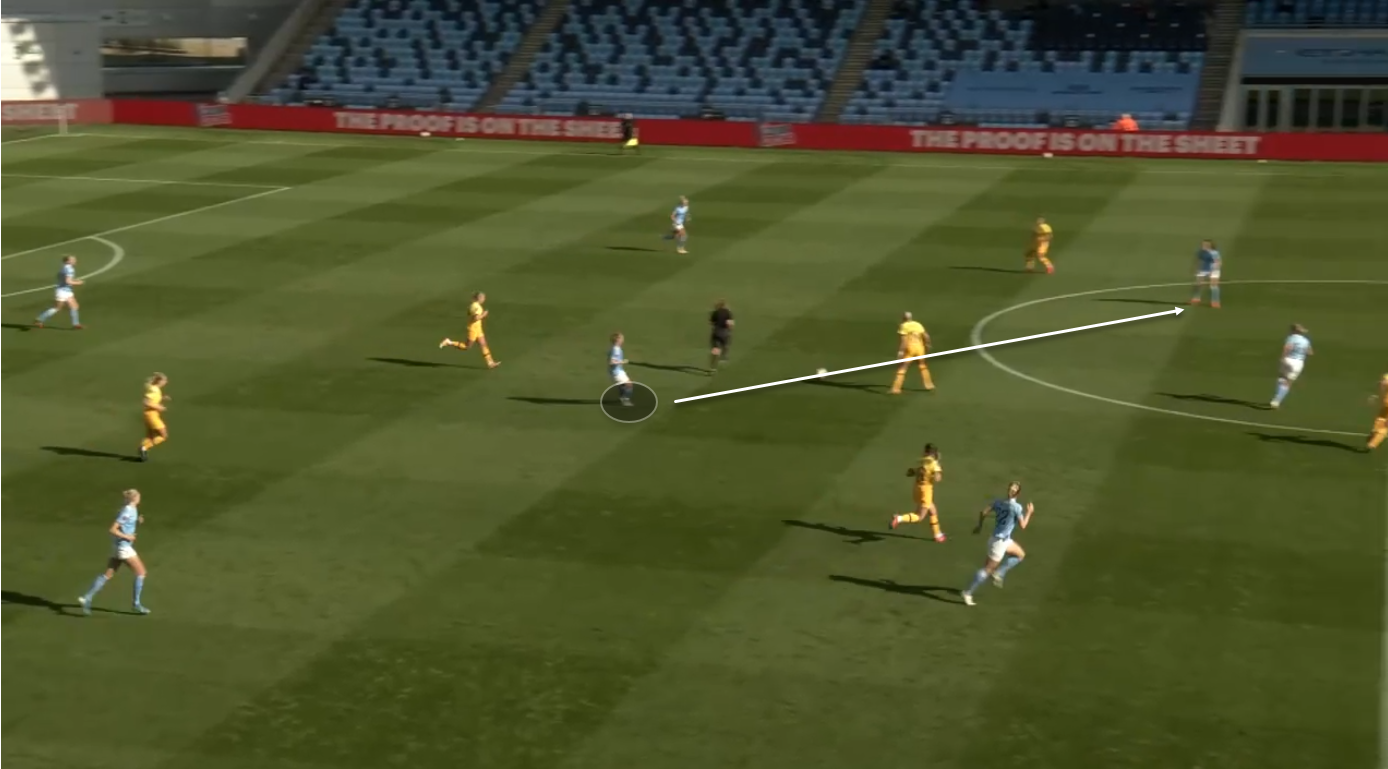 When City did play quick passing moves, they were able to penetrate and break Spurs’ compact shape. As the image above illustrates, we can see Walsh with time on the ball but passes it out quickly to Weir in midfield, who’s positioned right in between Spurs’ midfield and defence. The quick pass meant Kennedy and Green were unable to drop deep in time or intercept. 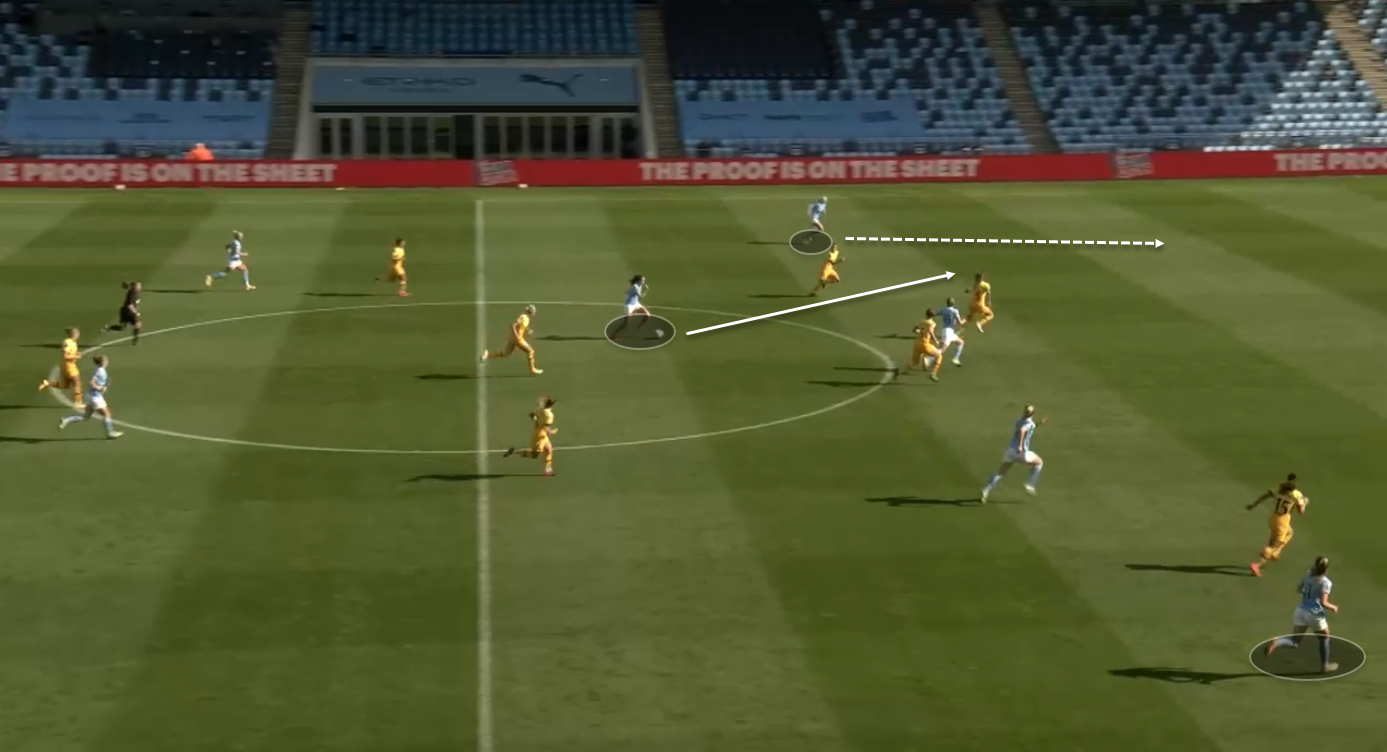 Though City are in a 4v4 attack, the Spurs players are densely populated in the central areas which gives Kelly space out wide on the far side to receive a through ball from Weir and attack the full-back. This quick incisive passing game allowed City to break Spurs’ midfield shape and expose their defenders against the speed filled, creative attacking quadrant.

One of the main reasons for Manchester City’s dominant win was also down to the fact that Spurs were not able to assume control of the ball and lost the midfield battle. The lack of possession wasn’t so much the issue, more so that Tottenham Hotspur failed to make use of the possession they had. Due to their deep line of play, Manchester City were able to exert high pressing tactics which would often force Spurs to go long into midfield. Part of this was because of Tottenham’s midfield’s lack of passing midfielders. They used a double-pivot of Kennedy and Green who are much better at ball retention and running rather than provide any sort of creativity. 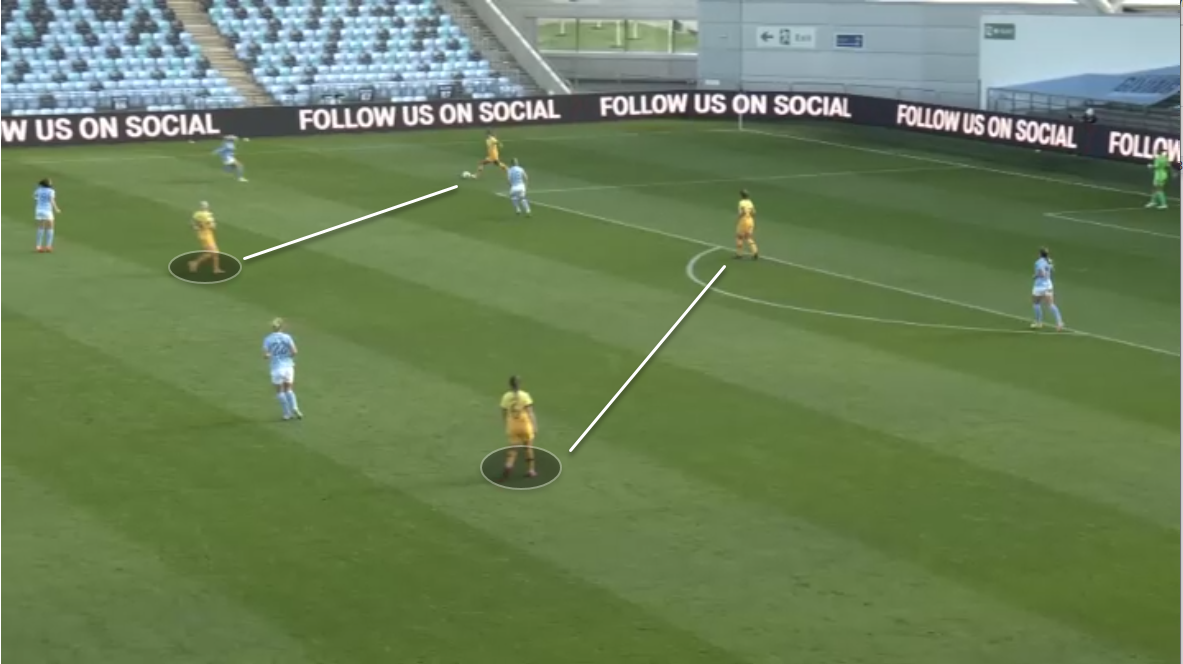 If we look at the image above, you can see how deep Kennedy and Green are and the space between them and the more advanced players (out of the image on the left) which meant that they were isolating themselves and gave Manchester City midfield control. If we look at the average time each team had in possession you can see that Manchester City had the ball for 16 seconds whilst Tottenham Hotspur had it for 10 seconds. A whole six seconds less than the opposition which put into the context of this game meant that Spurs were not able to effectively do anything with the ball. This ultimately meant they were unable to service the two hard-working forwards.

Spurs improved slightly in the second half where they were a bit more active, however, the forward progressively dropped deeper which just put City in more control. Mewis, in particular, was given or rather found a lot more time on the ball to play her natural deep-lying playmaking role.

The graphic above depicts the way both teams looked to attack and what’s most prevalent is Manchester City’s dominance in midfield with 16 attacks through the centre which highlights Mewis, Weir, and Walsh’s control on the game. This also contributed to their lack of counter-attacks (0), which considering the side was set up to do so wasn’t very effective.

Manchester City are finally starting to show their true power after a summer of spending. The new signings seem to have added a much-desired quality to their ranks, with Mewis and Kelly looking extremely impressive so far. Rose Lavelle made a cameo appearance and will need some more minutes before we see the best of her. The title race between Chelsea, Manchester City and Arsenal is sure to promise a tightly contested season.