This week’s FAWSL fixture of the weekend was the highly anticipated clash between Arsenal Women and Chelsea Women. The two heavyweights went head to head in what was expected to be a tight encounter between two sides who many would say haven’t hit their stride just yet. Chelsea have been winning games without being too convincing while Arsenal have had a shaky season so far.

Their loss against Manchester United Women last week summed up their season. Sunday’s game ended up in a draw which Arsenal Women will feel hard done by after arguably being on top of the game.

This tactical analysis will look at the tactics that both managers applied in this game and how they wanted to set out. Using analysis, we will examine the nuances that gave Chelsea the draw against Arsenal.

Starting with Arsenal, they made three changes from their game against Manchester United Women last week with Kim Little, Jill Roord and Leonie Maier back in the starting eleven.

Emma Hayes made no changes and started with the same team that beat Everton Women last week. This meant Sam Kerr was still on the bench with Bethany England and Pernille Harder starting once again. 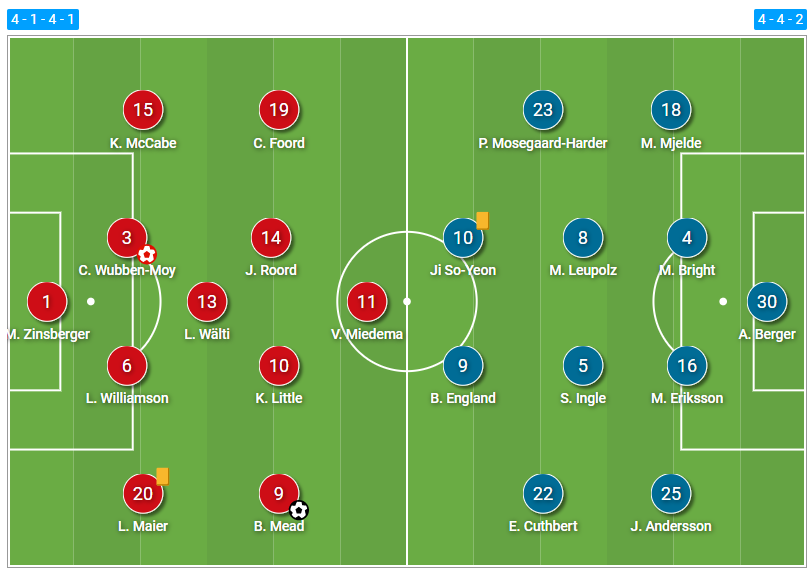 Arsenal Women showed early on how they were willing to play with their game plan around being a more counter-attacking side by allowing Chelsea to have possession. Starting the game in a 4-2-3-1 style system, they wanted to use Roord’s box-to-box running whilst having Little and Lia Walti creating a base to stop Chelsea’s wide forwards and midfielders playing in the central areas. Arsenal knew what Chelsea wanted to do, with their style of play clear since the first game week. By allowing them possession, they are forcing Chelsea to create and can almost dictate where the ball will be played. Stopping Chelsea’s front four was of utmost importance but it’s in midfield where the key battle was. 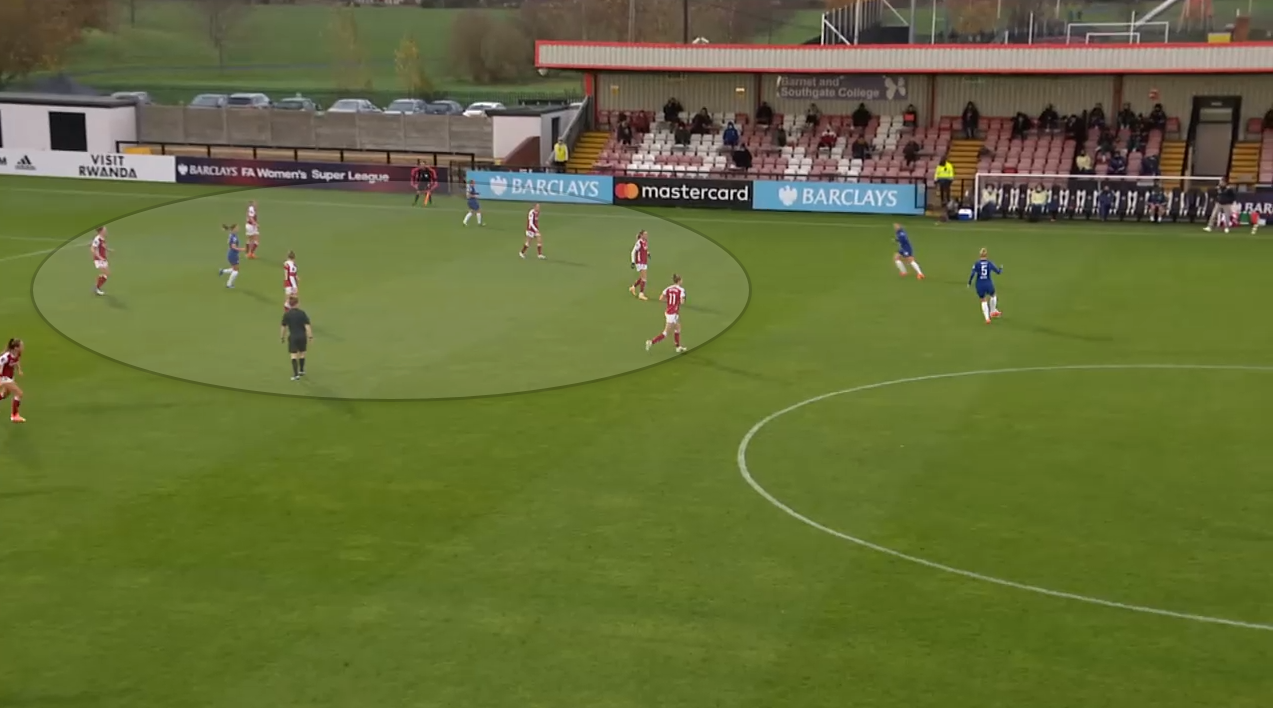 Holding a mid-block meant Arsenal were able to commit more players to the press when the ball was in midfield. Their positional play was more structured than normal which was needed to nullify Chelsea’s dynamic threat. As the image above shows, Arsenal held a compact shape not allowing Chelsea space in the central areas. Their pressing style was aggressive and triggered when players collected possession near the touchline. By forcing Chelsea wide, they were able to use the touchline as an additional player and apply more pressure. The only passing option here is back or down the line, which would corner Erin Cuthbert. 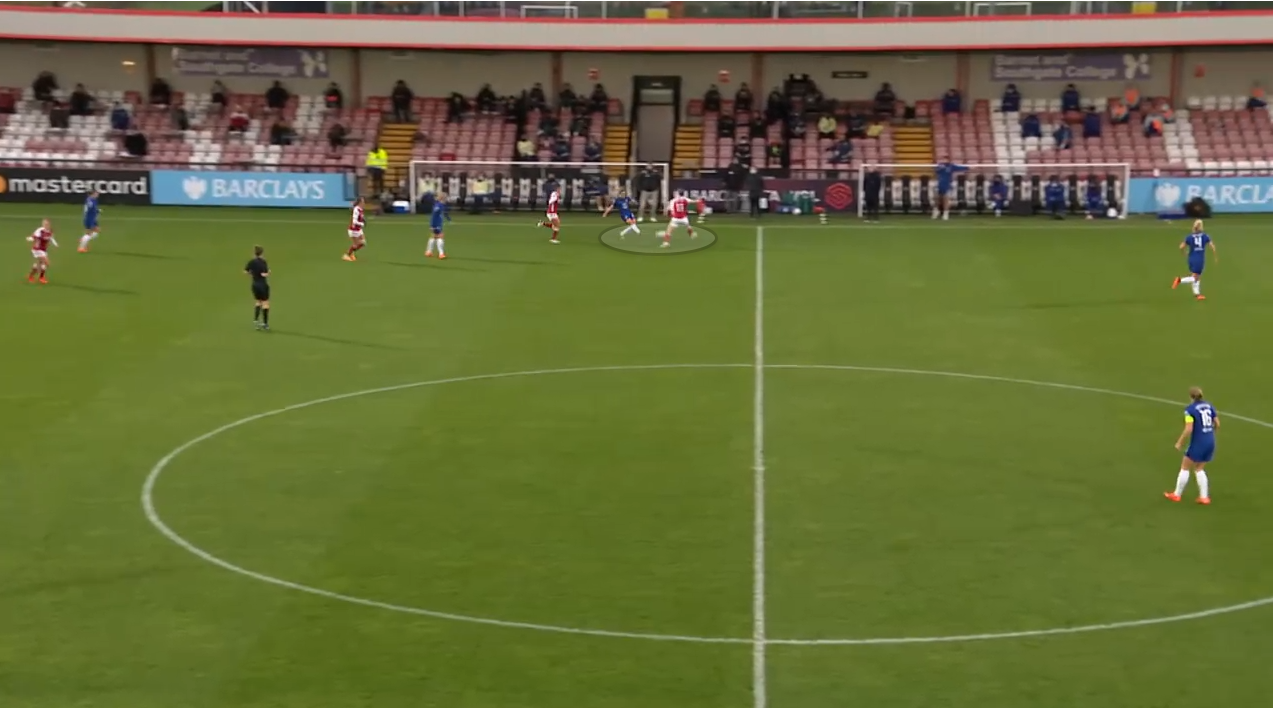 The pass eventually reaches Cuthbert but she is now forced back because there are no clear passing options from which Chelsea can progress forwards. The resulting pass back meant Vivianne Miedema was able to intercept and regain possession.

Another important use of the press and block was to stop Chelsea’s two playmakers in Ji so-Yun and Melanie Leupolz which would starve Chelsea of service up front. Arsenal pressed in numbers which meant Chelsea needed to commit more players to the ball carrier to offer passing options. This, in turn, gave Arsenal a chance to counter-attack the spaces in behind. The attacking midfielder (Ji) would often drift into the half spaces to create width and an overload on the flanks with the advanced full-back and winger, while Leupolz would drive forward to the edge of the box. Arsenal’s aggressive double pivot was used to counteract these movements and stop Chelsea from controlling the forward areas.

As the image above shows, Arsenal have held a good shape defensively. Both Ji and Leupolz are cover shadowed by two Arsenal players which forces Mjelde to play a long pass over the top. Arsenal would find it easier to stop a long pass over to England than allow Ji or Leupolz time to pick out a pass closer to the 18-yard box.

Hayes continued with her 4-4-2/4-2-3-1 system which has been their way of playing this season. Being able to play two narrow wide players and a creative attacking midfielder, Chelsea were effectively trying to play their way through from multiple angles and had a potent finisher in England at centre-forward. The full-backs were once again pushed up high to put pressure on Arsenal’s two full-backs to stay more defensive and create an overload in midfield.

The problem Chelsea faced was the fact that Arsenal’s defensive shape was much more resolute with Maier sitting deeper while McCabe ventured forward. They created overloads of three in the wide areas with a midfielder, full-back, and winger moving across to stop the supply from the Chelsea full-backs. Looking at the images below, you can see an example of Chelsea being forced to find another way forward because of Arsenal’s positioning and movement to cover and close down players in the wide areas. It was an unusually poor display from a strong attacking unit who failed to have a single shot on target. 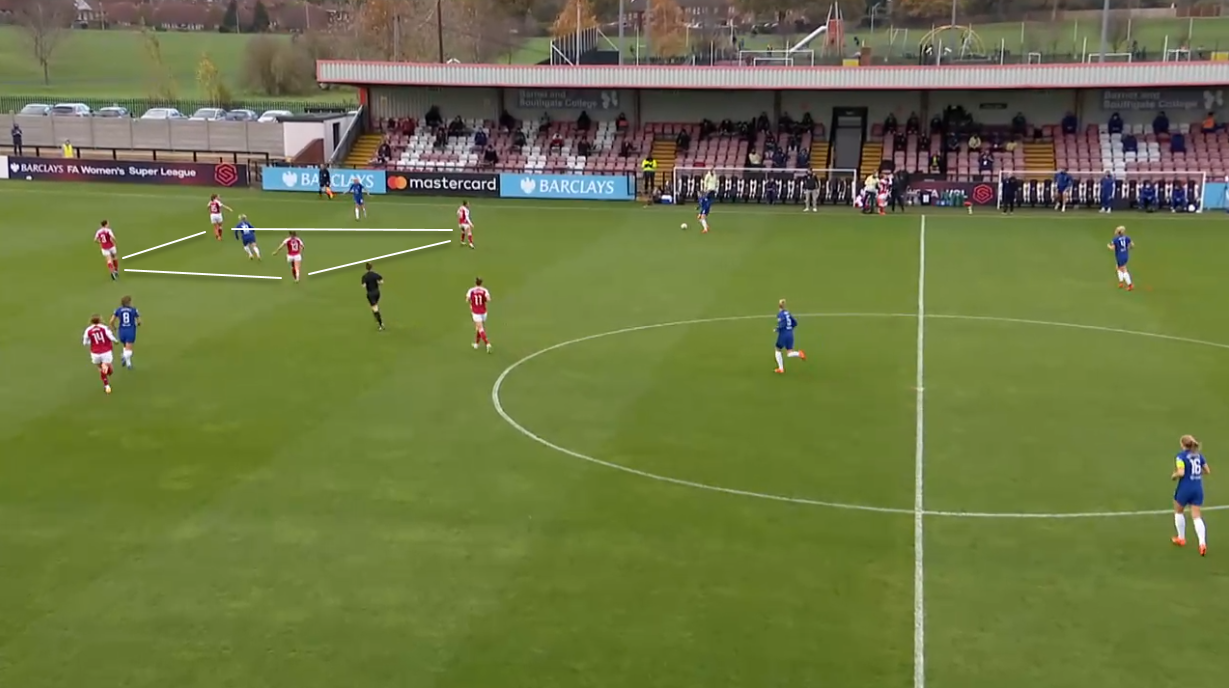 Chelsea opted for a 4-4-2 shape out of possession which effectively allows them adequate cover across the pitch. In most games this season, we’ve seen Hayes’ side opt for a high pressing strategy which starts from the centre-forward and attacking midfielder followed by the two central midfielders. The duel map below indicates Chelsea’s areas of engagement and it’s clear to see most of their defensive duels were in the wider areas rather than up front. 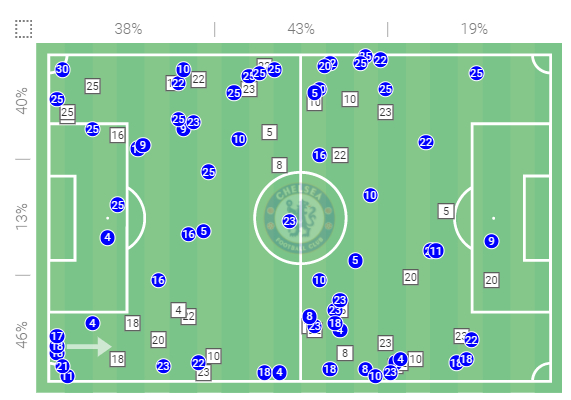 The image below shows Chelsea’s shape and most importantly each player is man-marked in midfield which forces Arsenal to play it back and start their build-up again. Ideally, this is where England and Ji would begin the press to win it back upfield. 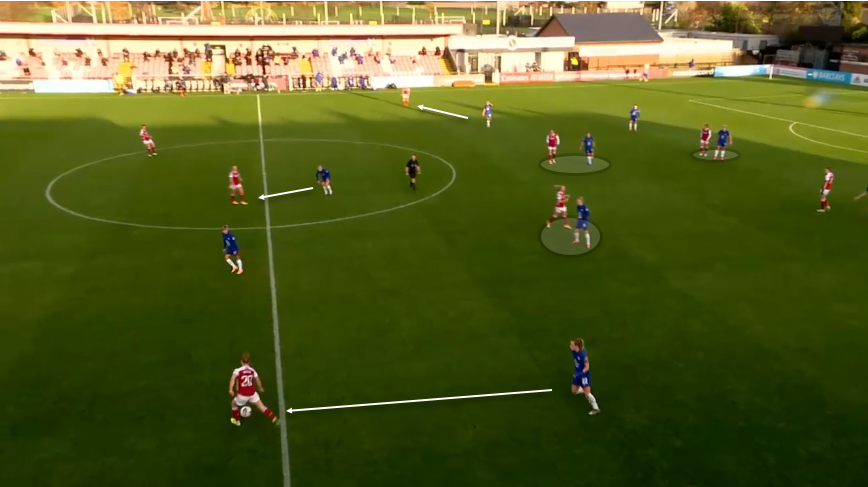 However, while they started with this, it was noticeable that there was a drop off in their intensity of press which can be attributed to Arsenal’s overloads in midfield. When they did press Arsenal, they had success in either winning back possession high up or forcing the ball back to goalkeeper Manuela Zingsberger. The below example points to Chelsea’s effective pressing methods. As we can see here, England and Ji are both situated in a high position pressing the centre-back and goalkeeper with Cuthbert joining the press on the right-back. Leupolz, Harder, and Ingle have stepped up to suffocate the space and pick up any loose balls that may come as a result. 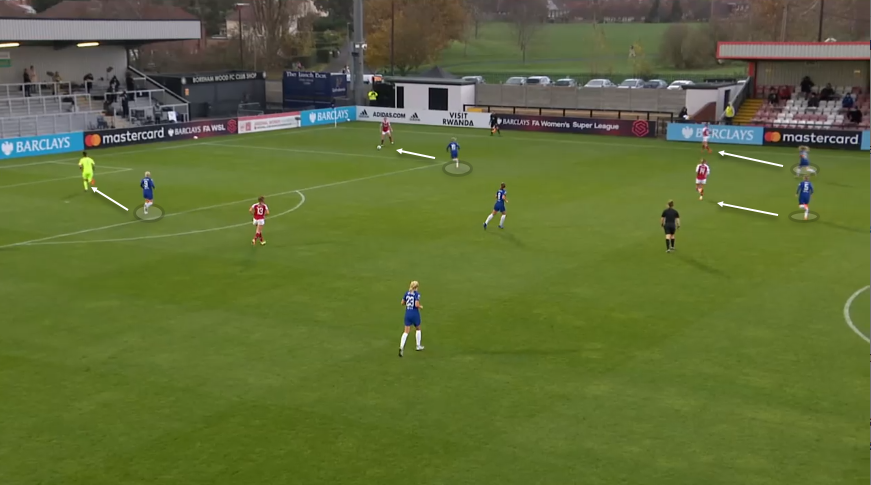 Chelsea’s defending, on the whole, was quite good, which was mostly reliant on their centre-back’s defending quality and positioning of Ingle. The three ensured Chelsea were not overrun when they were counter-attacked. Part of Arsenal’s attacking plan was to exploit the spaces in behind the advanced full-backs and use the pace of Katie McCabe to get in behind to cross for Miedema. Arsenal had joy down the left-hand side when they won back possession in midfield and sent long passes down the flank for McCabe as is evidenced below. 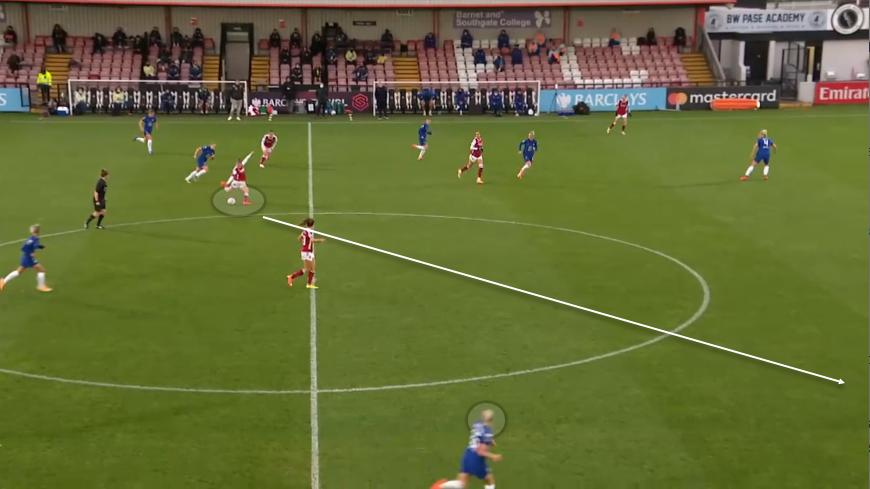 Arsenal win back possession from Cuthbert in their own half and when the ball falls to Cuthbert’s feet, she immediately fires a pass down their right for Beth Mead to latch onto. We can see Jonna Andersson tracking back but the pass reaches the Arsenal wide forward first which puts them in a good attacking position. Though Andersson catches up, Mead had the overlapping Maier as a passing option and two targets in the box to cross to. Chelsea were still good in 1 v 1 situations where the two centre-backs were able to keep Miedema quiet up until the goal was starved of service.

Arsenal repeatedly tried this and their goal came from a similar situation as is seen below. A wayward pass from Cuthbert is quickly pounced on by Little who plays Miedema in the left half space. 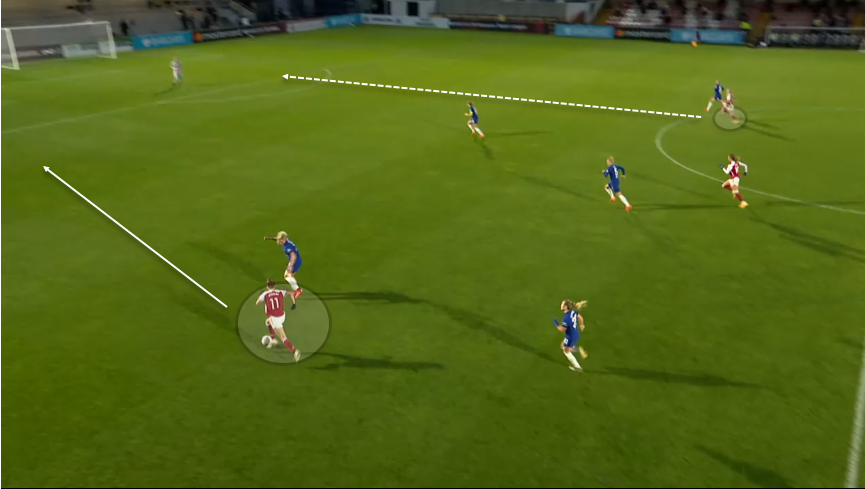 With Mjelde still running back from her attacking position, the Dutch striker takes on Mille Bright and beats her for pace. This run into the box sees more willing runners enter the box and get on the end of the cross, in this case, Mead. Chelsea suffered from this last week against Everton Women where Hayley Raso was able to get in behind which was due to their poor midfield control. While they weren’t punished last week, Arsenal managed to take advantage of a mistake in midfield and counter-attack efficiently and quickly.

Overall, the analysis has shown us that both teams were ineffective in attack and while the game ended in a draw, neither side could have complained about a scoreless draw. Both goals came from tired legs and a defensive lapse. Both teams approached the game cautiously, with midfield control a priority. Expect them to improve on their attacking effectiveness once they return to the FAWSL after the international break.