There were some very eye-catching matches on Sunday, such as the huge victories by Barcelona and Monaco on the league leaders in Spain and France. However, these results almost mean nothing to the title race, because Real Madrid and PSG still had a great gap over the rest. By contrast, the situation in Eredivisie 2021/22 was much closer as Roger Schmidt’s PSV were still chasing Ajax and they were merely separated by a two-point margin.

This game between Ajax and Feyenoord could potentially change the situation of the title race. Arne Slot’s side almost did it as they led on twice occasions, but the hosts eventually overcame to secure a difficult victory after being knocked out by Benfica in the UEFA Champions League.

This was an uneasy game, Ajax were clearly not at their best. Positionally, they also had problems that made Feyenoord easy to press, this tactical analysis would explain how ten Hag was able to solve Ajax’s issues in the positional structure.

After the disappointment in midweek, ten Hag did not change any player of the eleven in the league game. The backline was formed by Noussair Mazraoui, Jurrien Timber, Lisandro Martínez, and Daley Blind. It was more than a 4-1-2-3 than a 4-2-3-1 as shown on the Wyscout team sheet, Edson Álvarez was the 6 and Ryan Gravenberch was an 8 initially, another 8 was Steven Berghuis. The front three were Dušan Tadić, Antony and Sébastian Haller.

Feyenoord marched to the UEFA Europa League quarter-final after beating Partizan in both legs. Th Netherland-born Turkish player, Orkun Kökçü was not in the squad, so Fredrik Aursnes moved to the 6 to partner with Jens Toornstra. Hence, the centre-backs were Marcos Senesi and Gernot Trauner. Another change was Tyrell Malacia, who did not play in the midweek, returned to the left-back position.

Ajax were clearly not at their best this month. Compared to the beginning of the calendar year, the way they move the ball, keep the ball, and use the ball were all below par. In this game, ten Hag’s side set up with an imbalance structure as the centre-backs were not working in a conventional way. This resulted in some problems and allowed Feyenoord to press them easily in the first periods of the game. 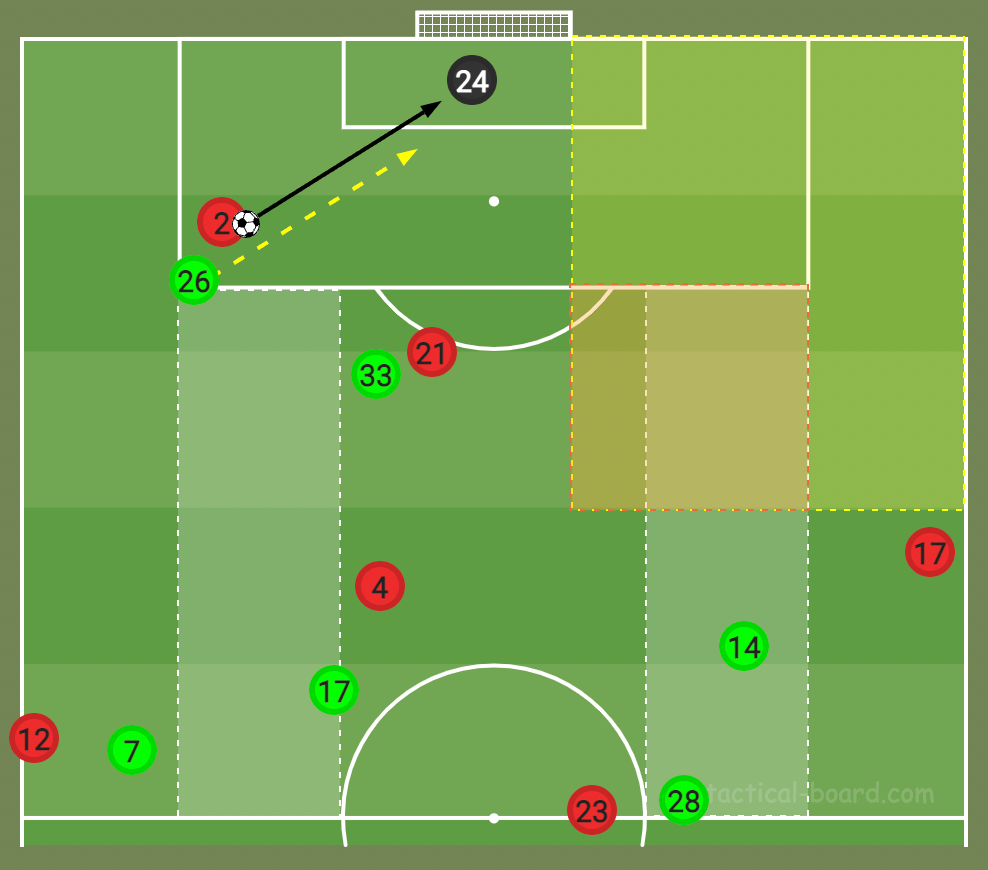 Traditionally, the centre-backs would split wide in the build-up. Although they would not stay on the touchline, because those vertical chains do not offer significant tactical values in the construction, they would at least be able to access both half-spaces so to offer enough width to circulate the ball around. Intriguingly, this was not the case with Ajax in this game.

Instead, Martínez was very close to his partner, Timber. The centre-backs were not spreading in two half-spaces, but staying tighter in the nearest vertical zone as shown above. Furthermore, the Argentine international might not even be sharing the same parallel zone with his partner, but pushing slightly higher and closer as a 6. This became an issue to hinder ball circulation in the construction phases.

Slot’s Feyenoord pressed high with a 4-2-3-1 or a 4-4-2, as Guus Til would join Cyriel Dessers in the first line, the duo should do pressing and cover to make sure Ajax could not go into the centre. Hence, when one of them was pressing, the other one, must stay closer to cover Álvarez. The intensity was high as the initial pressing player would chase the backward pass to André Onana as well. The problem of Ajax, was unable to give any option in the yellow zone as Martínez was in the centre. The keeper was forced to kick the ball long and that made the opponent easier to retrieve the ball. You might think Blind dropping could be a solution in the yellow zone, but that was less viable given Reiss Nelson, the Feyenoord right-winger, would also come out to press in such a case, there was not much time on the ball at all. 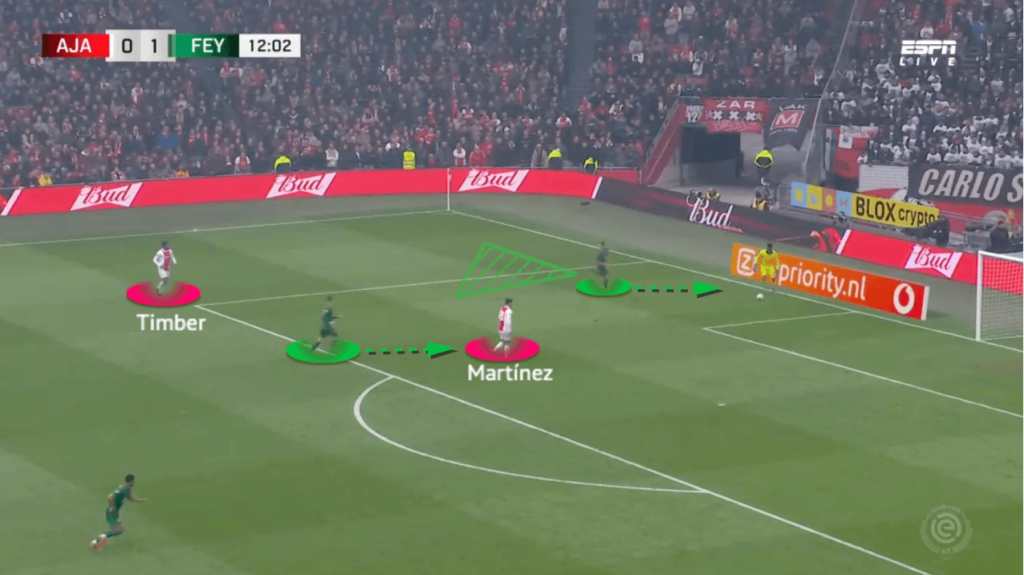 The below image was an example of the situation, when Feyenoord were pressing, despite Ajax had one more player against the 4-4-2, it was not a numerical advantage when Martínez was too close to Timber. Feyenoord just simply went for the keeper and forced him playing long. If Onana squared a pass to Blind, as you could also see from the screenshot, Nelson was ready to go high to catch the Ajax left-back. 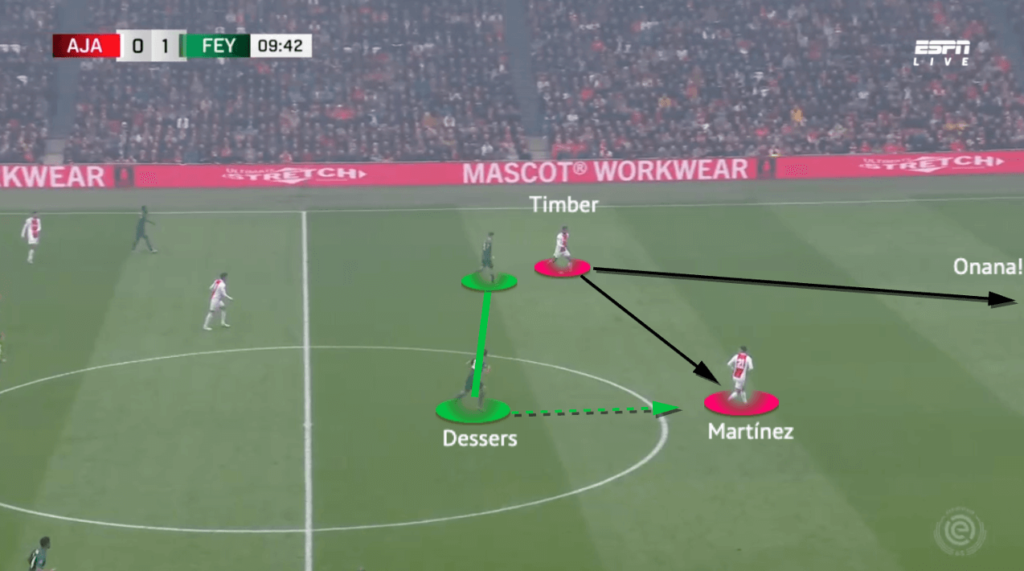 In addition, Ajax also faced problems in their construction phases, they could not circulate the ball smoothly when the players did too much or did not do the right thing – that makes Feyenoord easier to press.

On the above occasion, it was not a difficult situation as the solution was clear, Timber just needed to find Onana, creating enough depth and buying time for Martínez to offer minimum width, then, it was a clear 3v2 to bypass the first line if the opposition jumped.

However, in reality, Timber’s decision was very poor, as he squared the ball to his partner instead of using the depth option. It was not good, because Dessers was already so close to Martínez before the pass, the receiver did not have enough space to make the next move, and being forced to play again.

But the high pressing of Feyenoord did not work too long as ten Hag made in-game tactical switches to help his side, they tried to stretch the opponent and add one to two more players in the build-up. 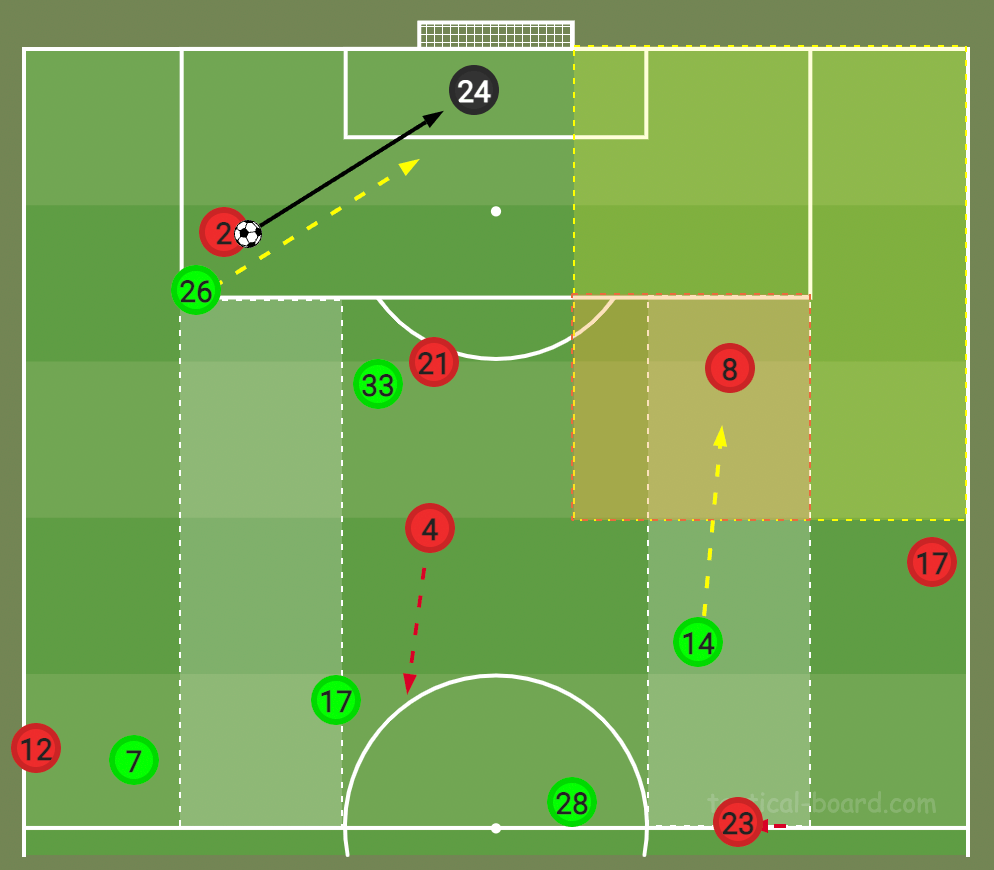 Again, we are referring to the yellow zone again, they tried to solve the Nelson press and give one more option to Onana. The solution was Gravenberch, who stayed higher at the beginning of the match, now came deeper to connect teammates with his position. Since Ajax moved one midfielder deeper, Álvarez was going high and making the deep runs more often to maintain the balance in the midfield.

As you could see, if Gravenberch was in the orange zone, he could help Ajax circulate the ball because now there was a 3v2 numerical advantage in the first line, as Dessers could only cover Martínez in the centre, but not block the access to the other half-space.

Meanwhile, that Gravenberch’s position could also be included as a 2v1 overload on Nelson, as now the Arsenal loanee was attracted to the centre, but he came from a far distance to press, it was difficult to block the angle of Gravenberch. If Nelson pressed vertically in the centre, then, as a result, Blind would be free when Tadić occupied the Feyenoord left-back. 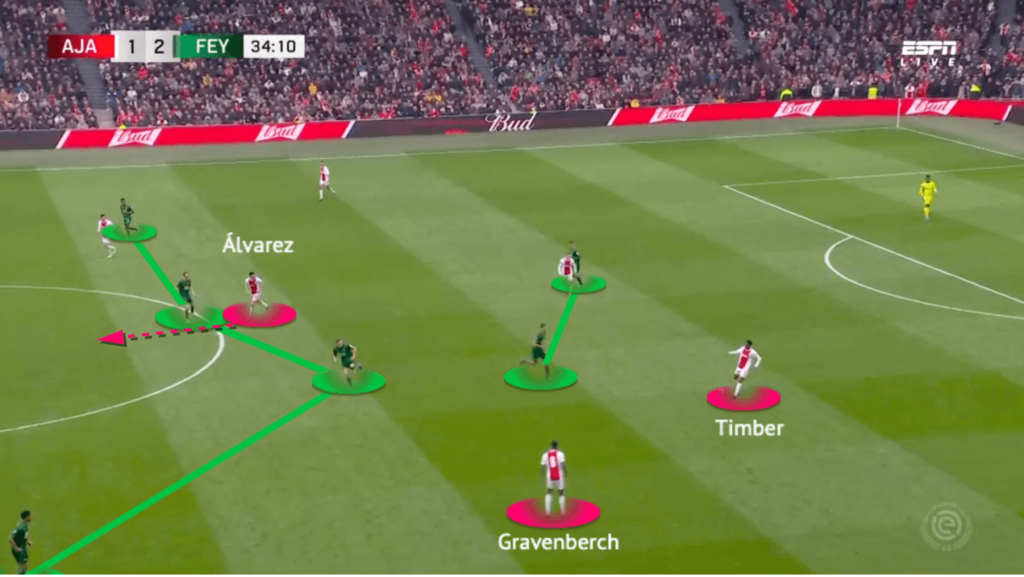 This was a situation of Ajax’s positional structure after the change. As Feyenoord pressed them in a 4-4-2, Gravenberch’s presence could be the additional player to solve. And since the direction of the press was often from Ajax’s right side, the passing lane to the left half-space was vacated.

Also, you can spot Nelson’s awkward position. This time, he oriented himself with Blind, so he was dragged away from the press, so there was no one to press Gravenberch from the midfield as Álvarez was also making a forward run to fix their attention.

The above tactics, as explained, had very positive effects on Ajax’s positional structure, as they had an outlet to pass forward now. However, if you wanted a player in spaces and contributing more to the attack, that one should not be Álvarez. Therefore, ten Hag made a very early change by introducing Davy Klaassen at the break, Álvarez was replaced, then, Gravenberch played as the 6. 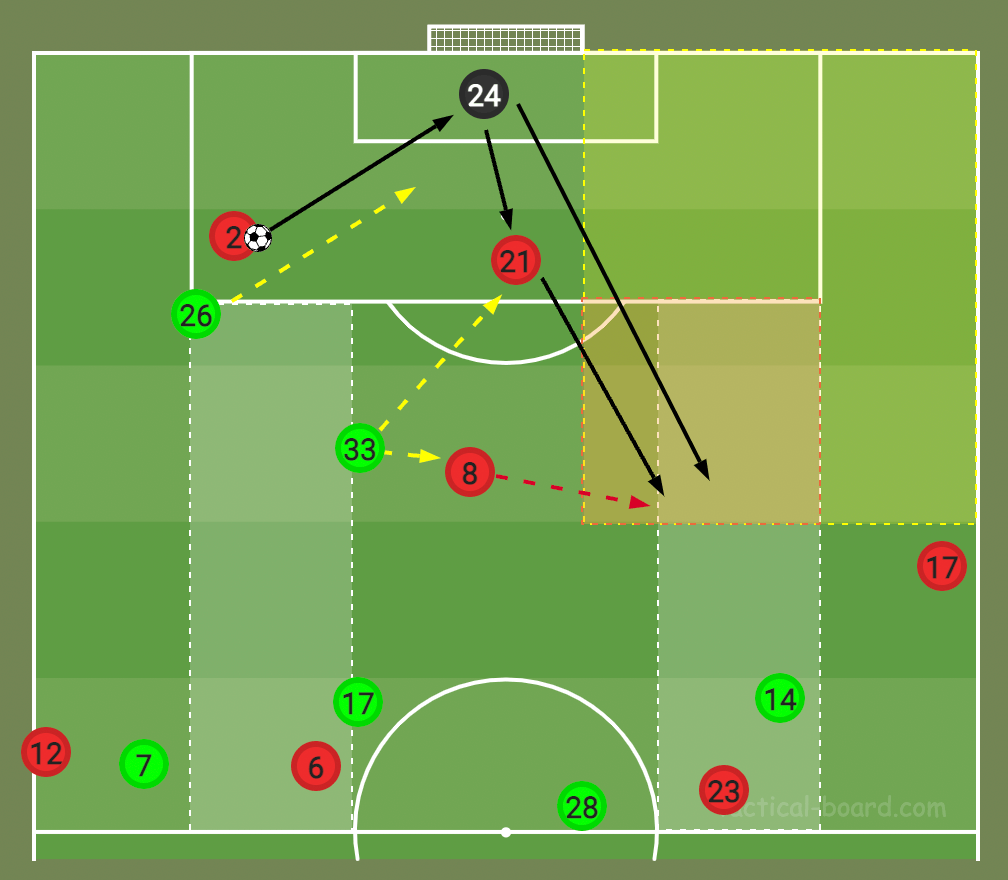 Since Ajax are a side driven by ten Hag’s principles of plays, instead of the formation, they were extremely fluid and the team dynamic was very strong. This change offered another set of problems for the opponents, as they now solved the Feyenoord press in another way.

We showed the new situation with the above image. Despite the centre-backs could still positioning themselves close to each other, it was not a big issue as Gravenberch’s added the movement to support. He was always behind the first line, keeping Tils or Dessers mentally engaged all the time. For example, in a case like that, since Gravenberch was moving to the orange zone, Dessers would have to choose between staying in the centre to close Martínez, or following the Ajax 6. Intriguing, regardless of Dessers’ decision, Ajax could ultimately reach Gravenberch because Feyenoord did not have enough horizontal coverage for the central three zones. 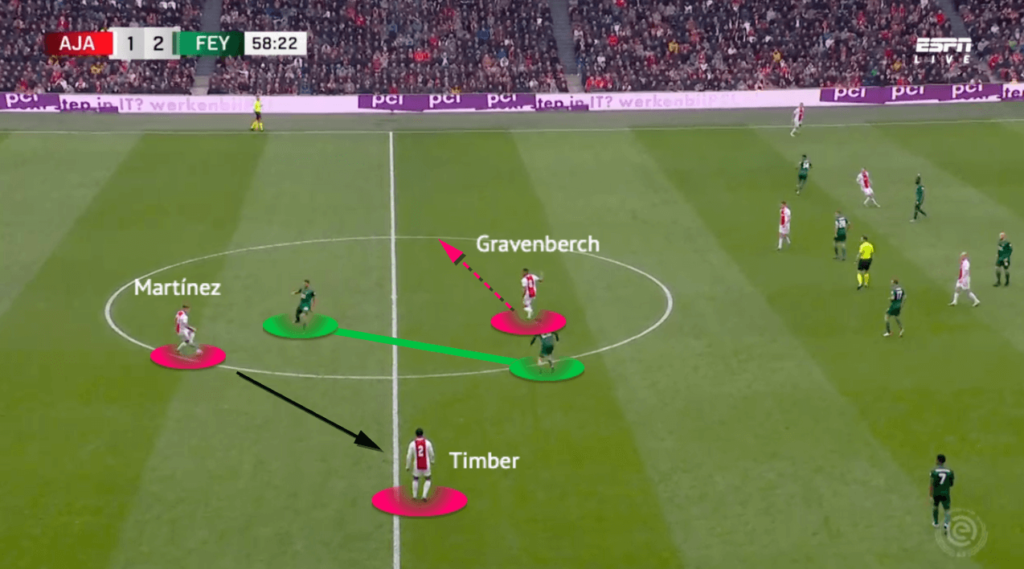 The above example was from the middle third, but the concept was exactly the same as we showed previously. Feyenoord’s press was detached from the midfield, as Ajax had so many players high to push eight men down. Then, a 3v2 remained in the centre of the pitch.

Even though Timber and Martínez were staying in the closet two vertical zones again, this time, Feyenoord could not press them because Gravenberch was there. The Ajax 6 simply used his movement to pull Til to the other side, so Timber could be free to receive in such a case. This kind of movement and the engagement with the first line was something missing from Álvarez in the first half. 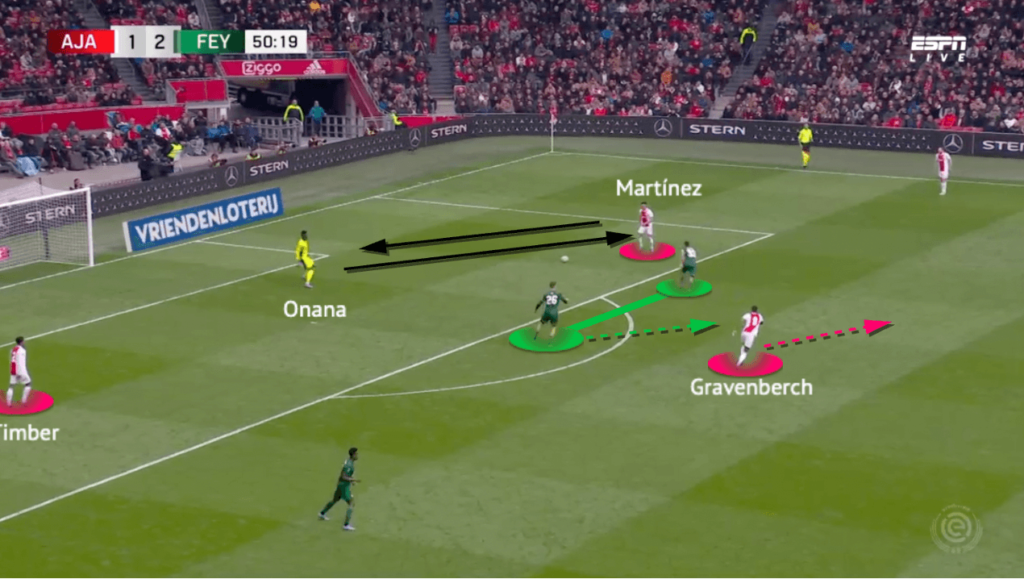 In another example here, it was a bit different as the centre-backs now spread in both half-spaces. However, the move of Gravenberch was still vital to open spaces and options in the build-up. When Onana exchanged a pass with Martínez, Gravenberch was moving diagonally to the orange zone – it invited Til to that same zone. When the pass went back to Onana from Martínez, you could see, as a result, Timber would also be very free to receive as the Feyenoord left-winger was also retreating.

For Ajax, this game is valuable because much important information is taken. After being eliminated by Benfica in the UEFA Champions League, ten Hag’s side must be able to regroup because the season has not ended yet, the victory was huge! Even though they were slightly out of form recently, Ajax fans should not be worried about too much, they were still the favourites for Eredivisie and the KNVB Beker. As shown in this analysis, ten Hag was able to solve problems during the game, the in-game changes could be vital to affect the direction of the match, and Ajax would need to be smart all the time.