The ambiguity of this current Chelsea side – which likewise speaks for much of the club’s success over the past twenty years – is that the more off-field chaos that ensues, the better and more formidable they seem to become. Saturday’s proficient victory against Chris Wilder’s spirited Middlesbrough side encapsulated the professionalism and tactical maturity Thomas Tuchel has installed in them amidst unprecedented circumstances. This tactical analysis will examine exactly how that happened.

Chelsea’s hosts on a serene Saturday evening in North Yorkshire were certainly not there to merely make up the numbers – Middlesbrough had already knocked out Premier League titans in Manchester United and Tottenham in the two previous FA Cup rounds, and a festival pre-match atmosphere in the Riverside Stadium clearly suggested the home side fancied their chances of another upset. Wilder made no changes from Tuesday’s win away at Birmingham, deploying a disciplined 5-3-2 and hoping to replicate Chelsea’s curated wing-back system to stretch the visitors horizontally and battle them man-for-man.

Tuchel’s Chelsea in recent months have however demonstrated their ability to shake things up tactically, here deploying a 4-3-3 in possession and making five changes from Wednesday’s trip to Lille. Ruben Loftus-Cheek assumed a single pivot role in a three-man midfield that also subsumed Mateo Kovacic and Mason Mount. Christian Pulisic and the returning Hakim Ziyech flanked Romelu Lukaku upfront. 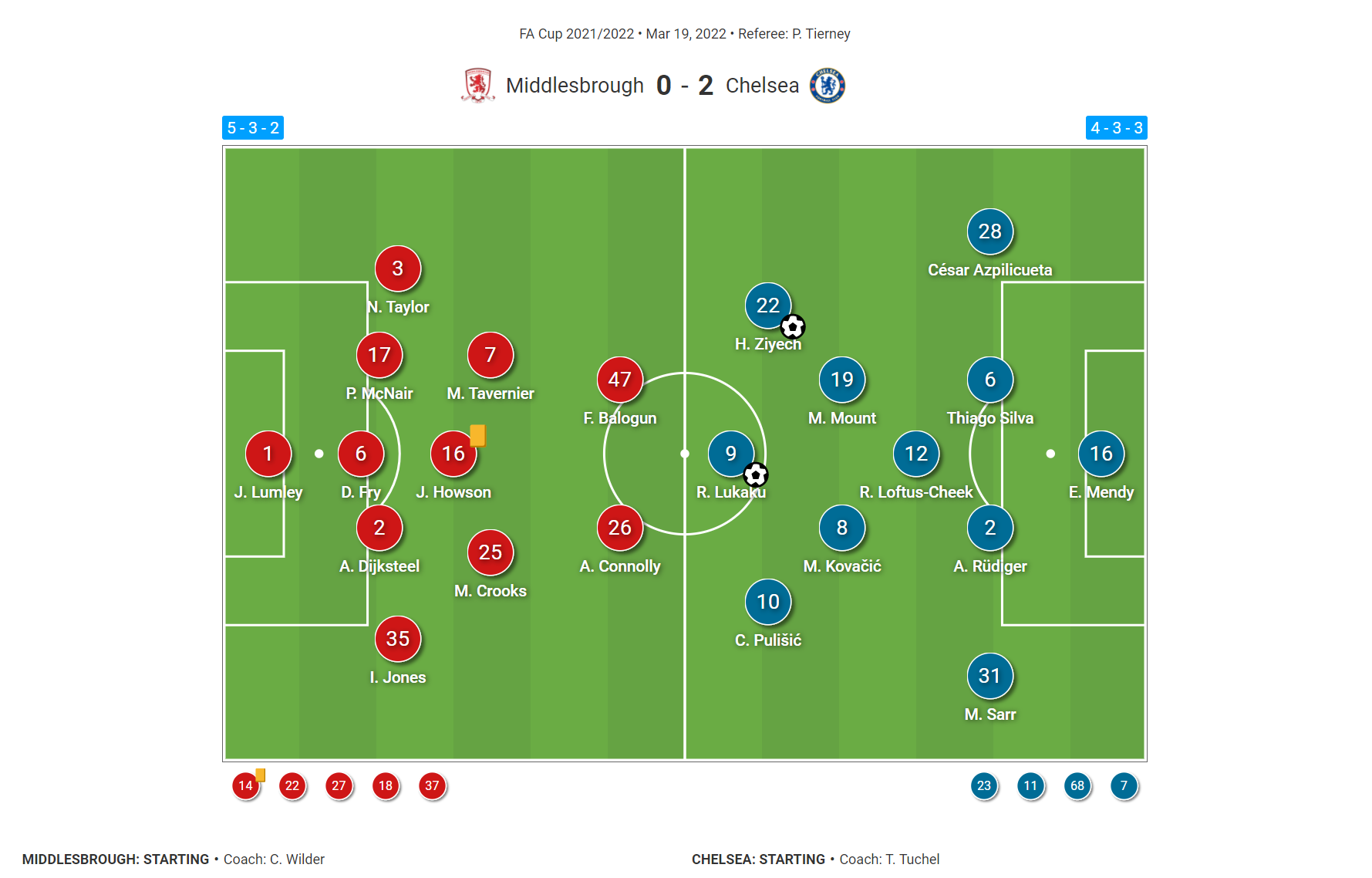 Chelsea began the match with the typical intention of building up play from the back, but Middlesbrough’s 5-3-2 high block provided lateral compactness in midfield, allowing few vertical passing options for Chelsea to progress with. This subsequently isolated Loftus-Cheek in the single pivot role, who was frequently overloaded and not a viable option to receive under pressure. Halfspace freedom between the lines for Mount and Kovacic was likewise difficult to come by. 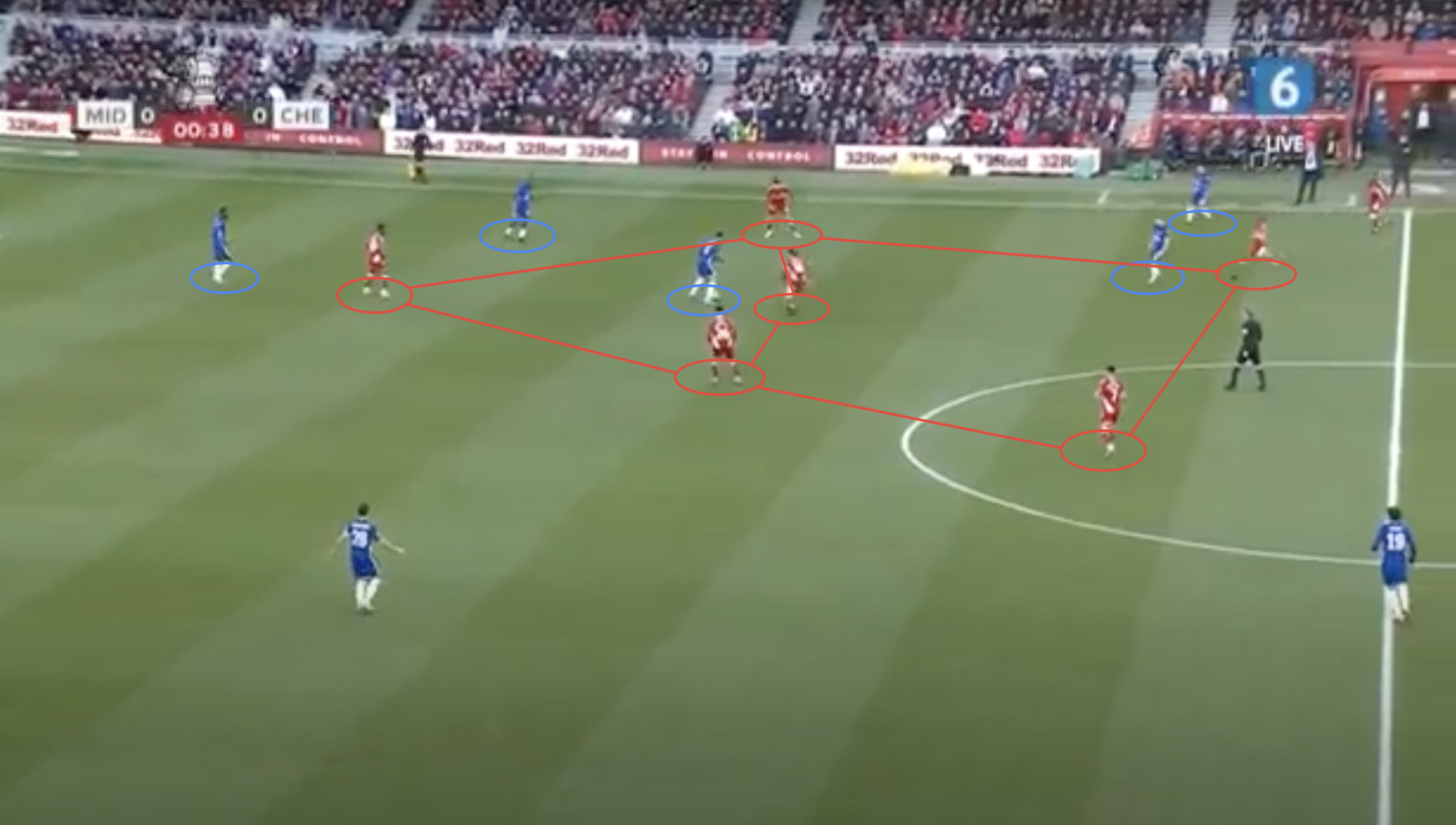 Chelsea certainly missed their usual technical quality in the deep build-up phases in Jorginho’s absence, with Loftus-Cheek lacking the natural awareness to effectively engage in the creation of triangles. Chelsea’s fullbacks would therefore remain relatively passive; championing ball circulation and offering a feasible passing angle rather than contributing to any attacking threat – atypical to what we have come to expect from Tuchel’s side this season.

Here, the ball-player Rudiger could not transcend the Middlesbrough line of pressure, as their compactness and discipline rendered Loftus-Cheek and Kovacic as unfeasible options, so instead circulated possession horizontally to Silva. Neat ball retention across the back four became a common theme of the match.

Chelsea therefore sought spaces in wide asymmetrical rotations; the two wingers would drop deep and remain extremely wide, encouraging man-orientated engagement from the Middlesbrough fullbacks and leaving space in behind for the two wide midfielders to exploit. Ziyech and Mount in particular combined effectively, fashioning time for the Moroccan to pick out copious progressive passes behind the Middlesbrough back line after manipulating the wide structure. 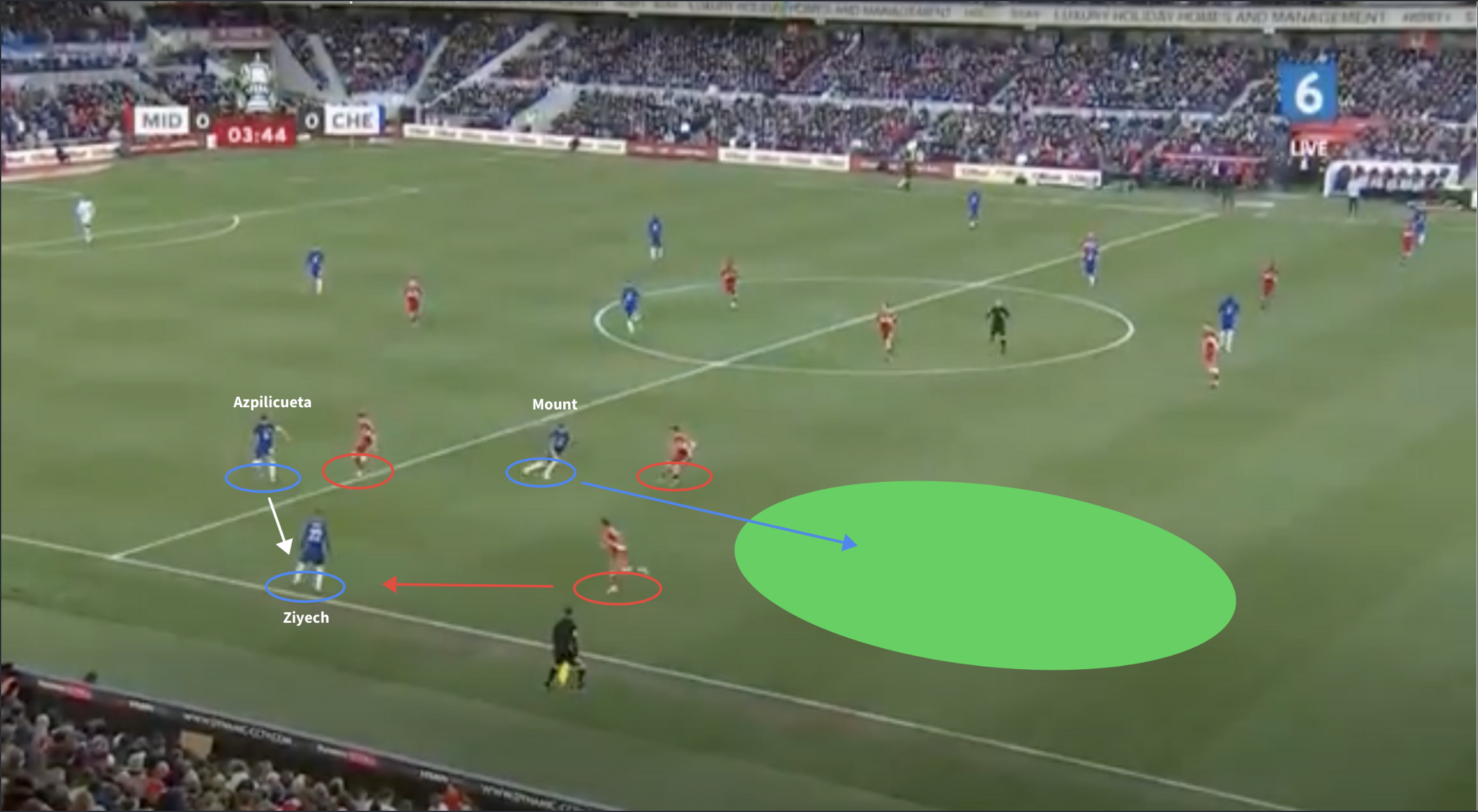 Here, Ziyech dropped to create a diagonal option for the ball-carrier (Azpilicueta), which attracted the engagement of the Boro left-back (Taylor). This set the precedent for Mount to make a blind side run on the centre-back, driving into the newly-developed space behind the back line. 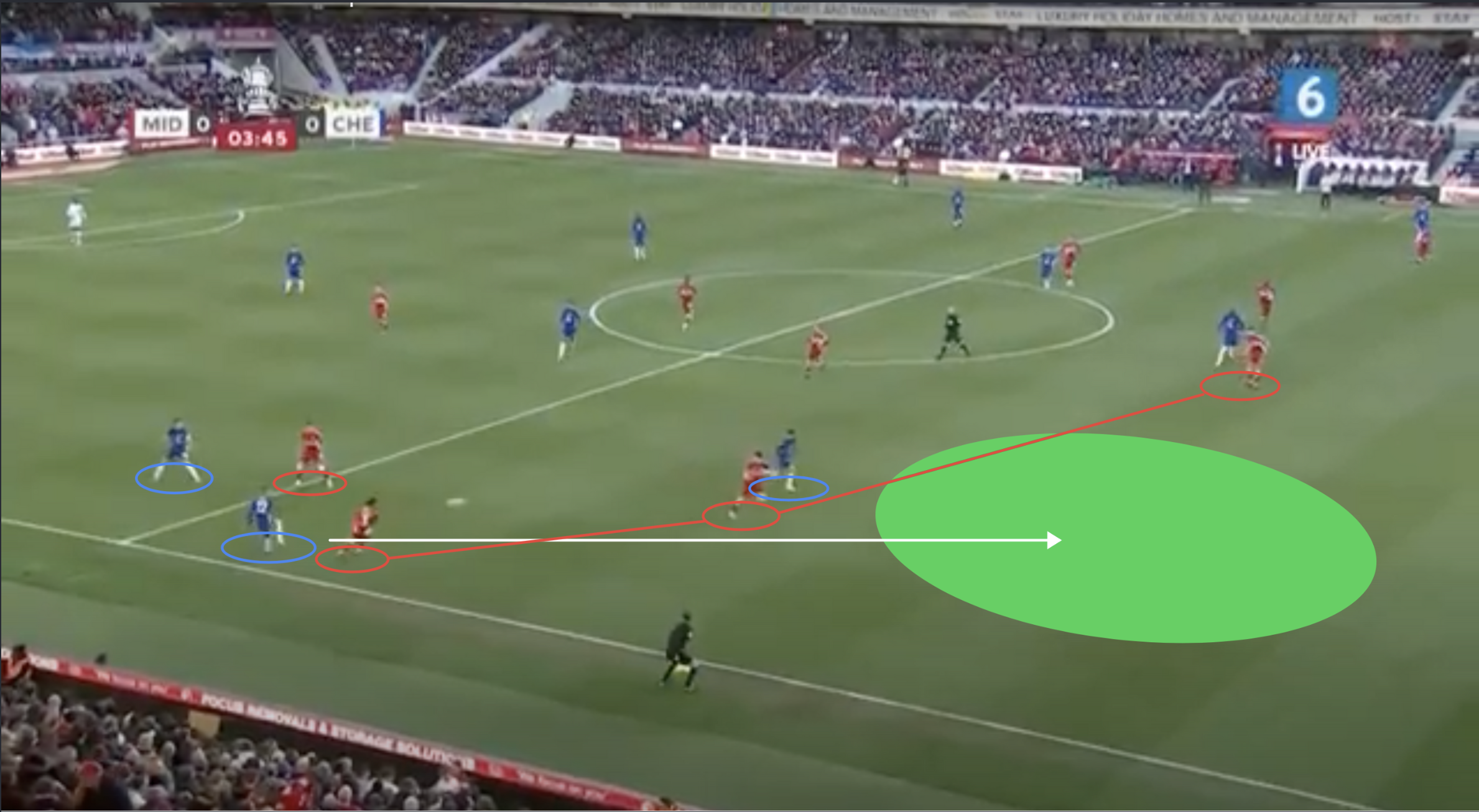 Ziyech’s trademark playmaking ability made this a high-percentage pass. Mount was thus able to get goal side of his man, profiting from the disparity between the Middlesbrough defenders, and received possession in the right halfspace. Mount then isolated his marker and fashioned an ideal crossing scenario, from which Chelsea generated a >0.4xG chance.

This interchangeability between positions constituted a potent attacking option for Chelsea, relying on player movement to create pathways through which to progress the ball more effectively. This tactic likewise laid the foundations for the opening goal. 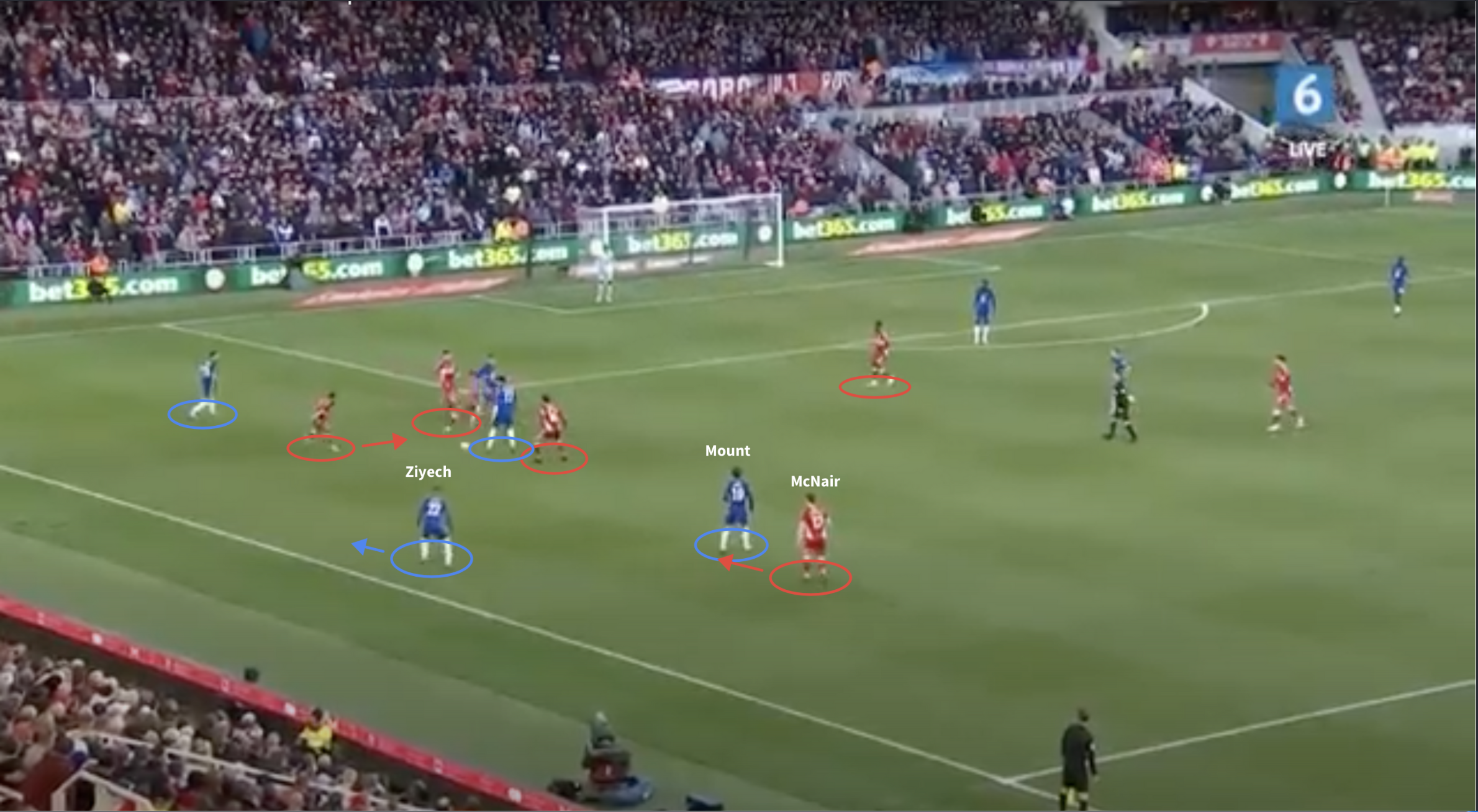 Here, Ziyech again dropped deep to provide a passing option to the Chelsea defence, who were suffering high pressure from another bold Middlesbrough pressing pattern. Not only did Ziyech’s movement afford Chelsea an escape from a possible negative transition, but it likewise allowed them to transcend the first line of Middlesbrough pressure; no small feat given the disciplined nature of Wilder’s system. 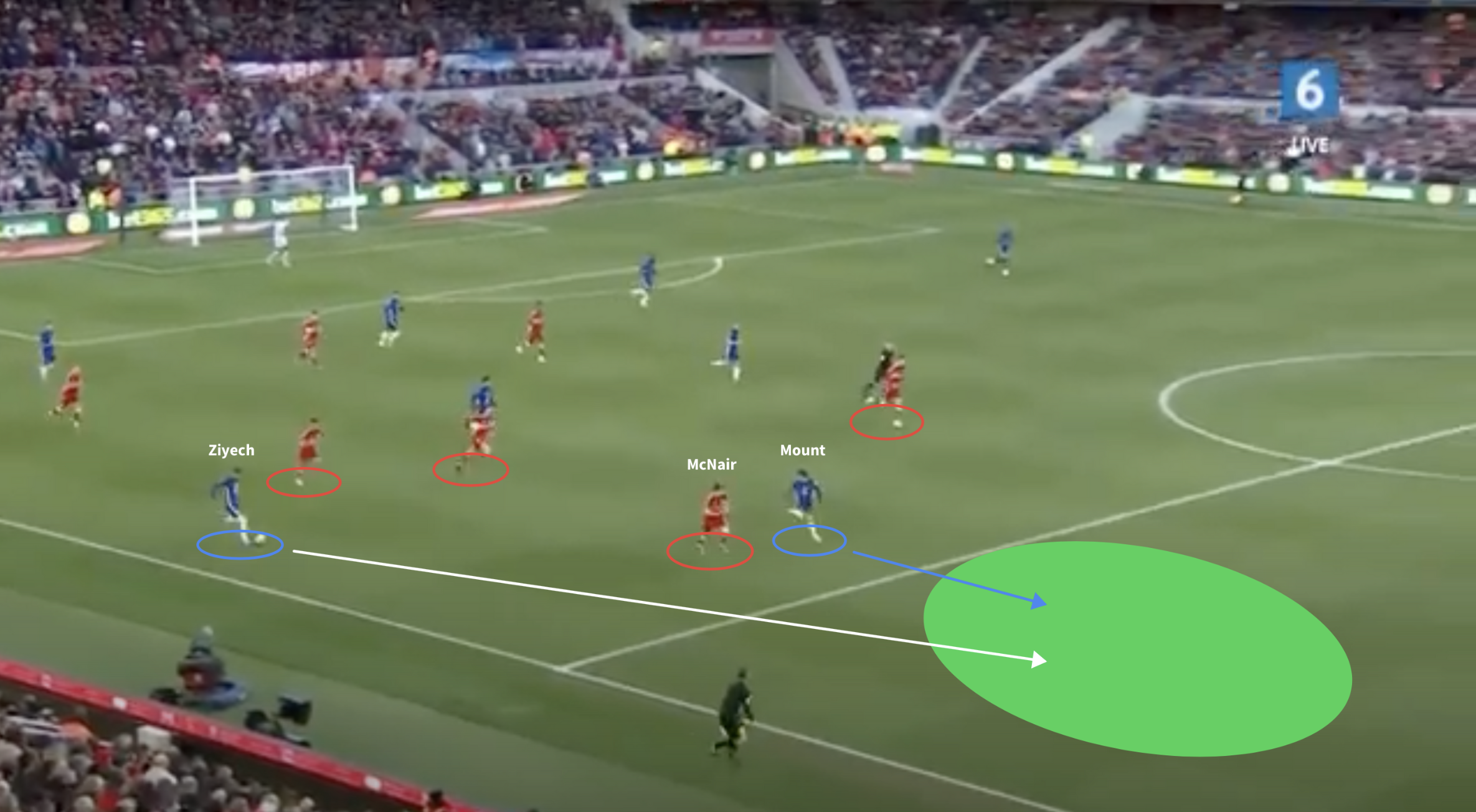 Boro’s aggressive block meant the defensive line was naturally high, allowing Mount to once again perform a blind-side run on McNair at centre-back. Ziyech’s aforementioned ability with progressive deliveries made this an easily achievable pass. 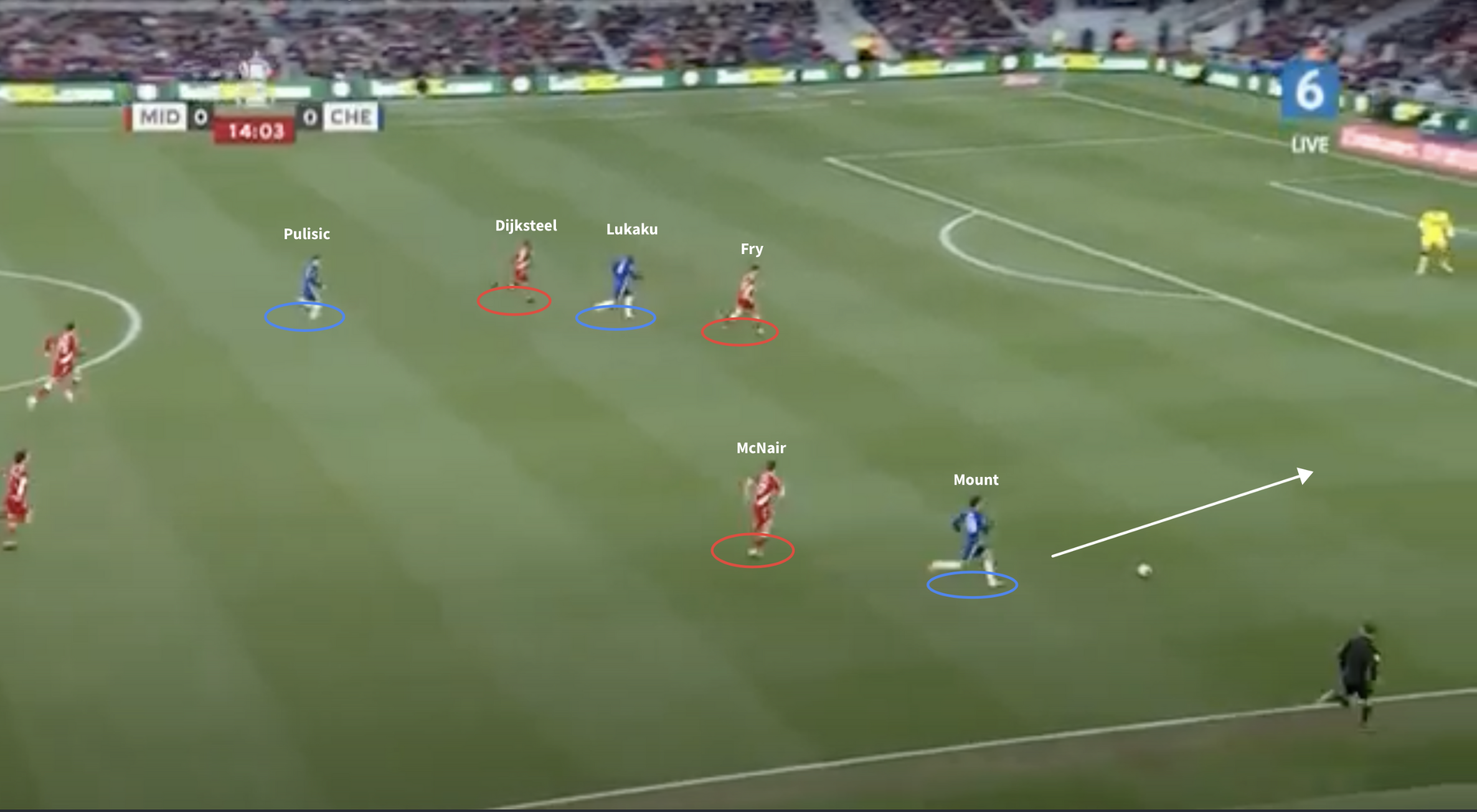 Mount was here able to isolate his marker in a 1V1 situation, giving him probable qualitative superiority in a dangerous zone of the pitch. Chelsea had expertly fashioned control of the right halfspace, making opportunities to progress the ball clearer. Mount skilfully exploited a 2v2 in the area, crossing the ball for Lukaku to score from a 0.5xG chance.

This trend continued throughout the match; Chelsea would soak up high Middlesbrough pressure with ground passes across the back four, waiting for wide rotations and subsequent overloads to appear. Loftus-Cheek, considering the usual duty of a single-pivot is to dictate proceedings, was happy to be bypassed by the Chelsea ball-carriers, who quickly learnt that vertical penetration was improbable. 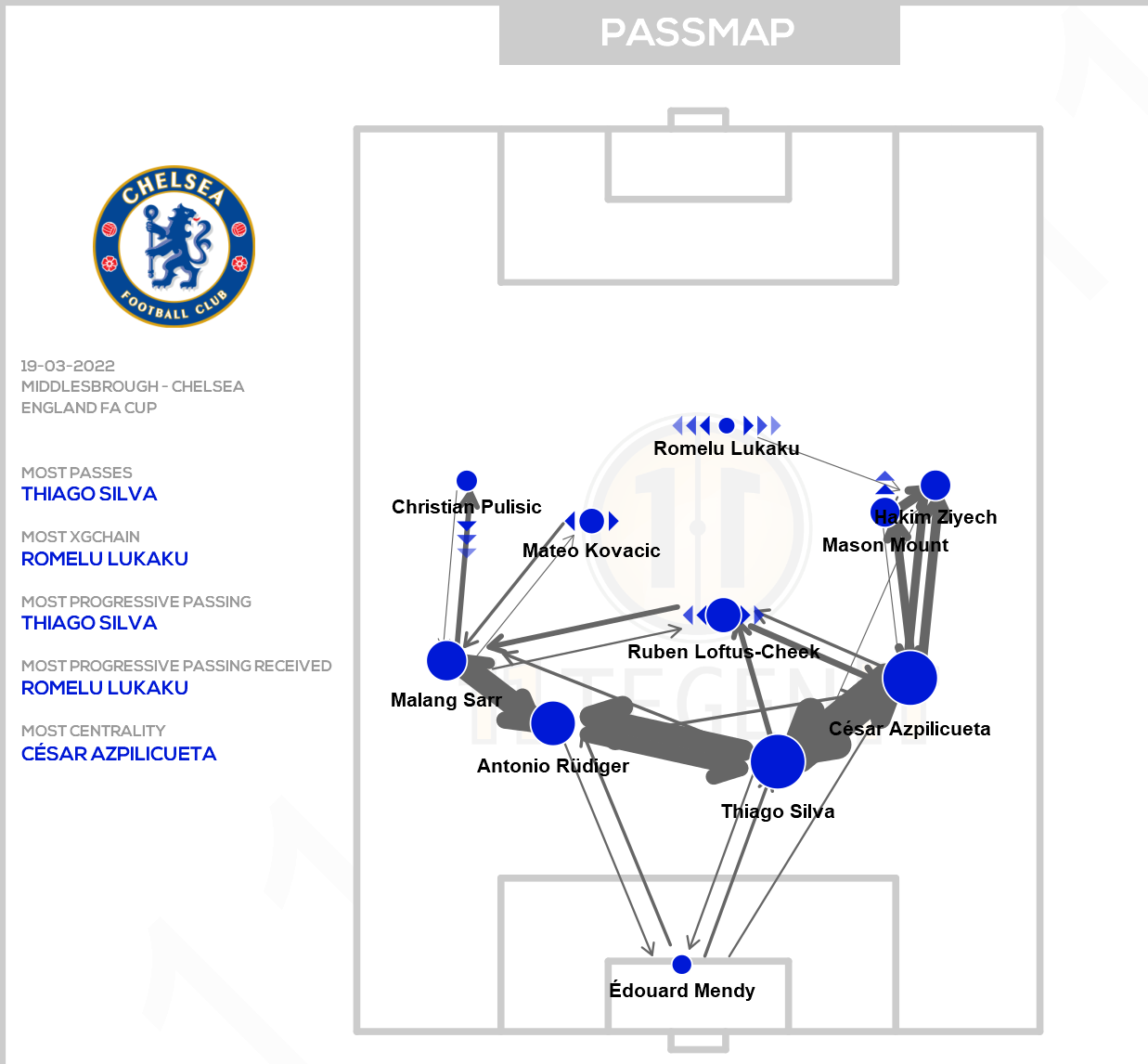 The passmap and average positions above illustrates this trend; the proximity between Mount and Ziyech on the right is attributable to the several rotations they performed to manipulate the Middlesbrough defensive structure. The volume of passes between Rudiger, Silva and Azpilicueta demonstrate their relative caution in circulating possession, rather than seeking to immediately exploit the halfspaces.

Middlesbrough continued with their high press, a notable pressing trap deployed whenever Sarr would receive possession in deep and wide areas, but their boldness out of possession ultimately cost them a second goal just after the half-hour mark. 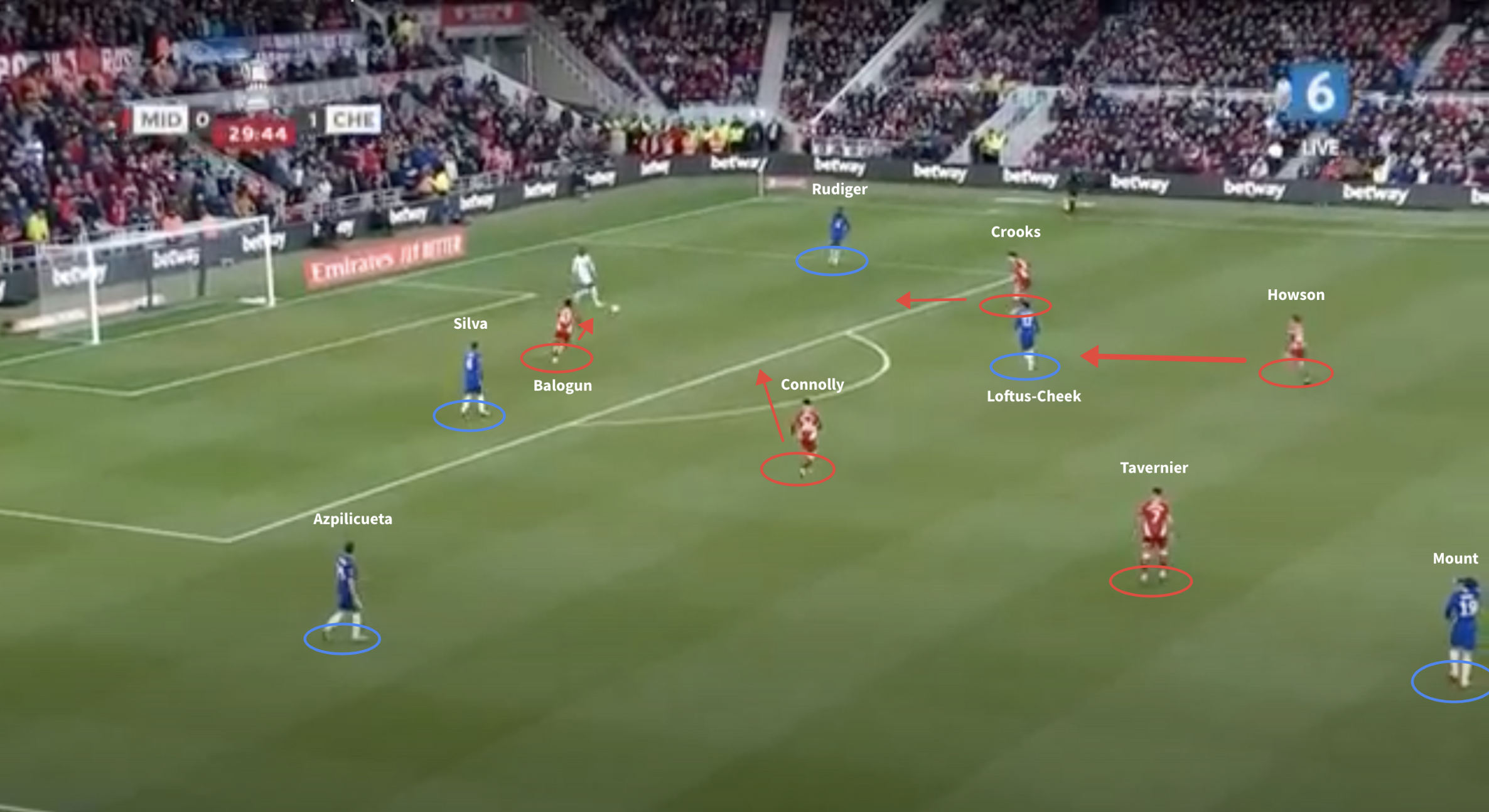 Here, Chelsea again displayed patience in possession and drew in an uncoordinated Middlesbrough press. This was typified by Howson’s decision to sprint forward and apply man-oriented pressure to Loftus-Cheek, leaving Kovacic (out of frame) unmarked in the left halfspace. 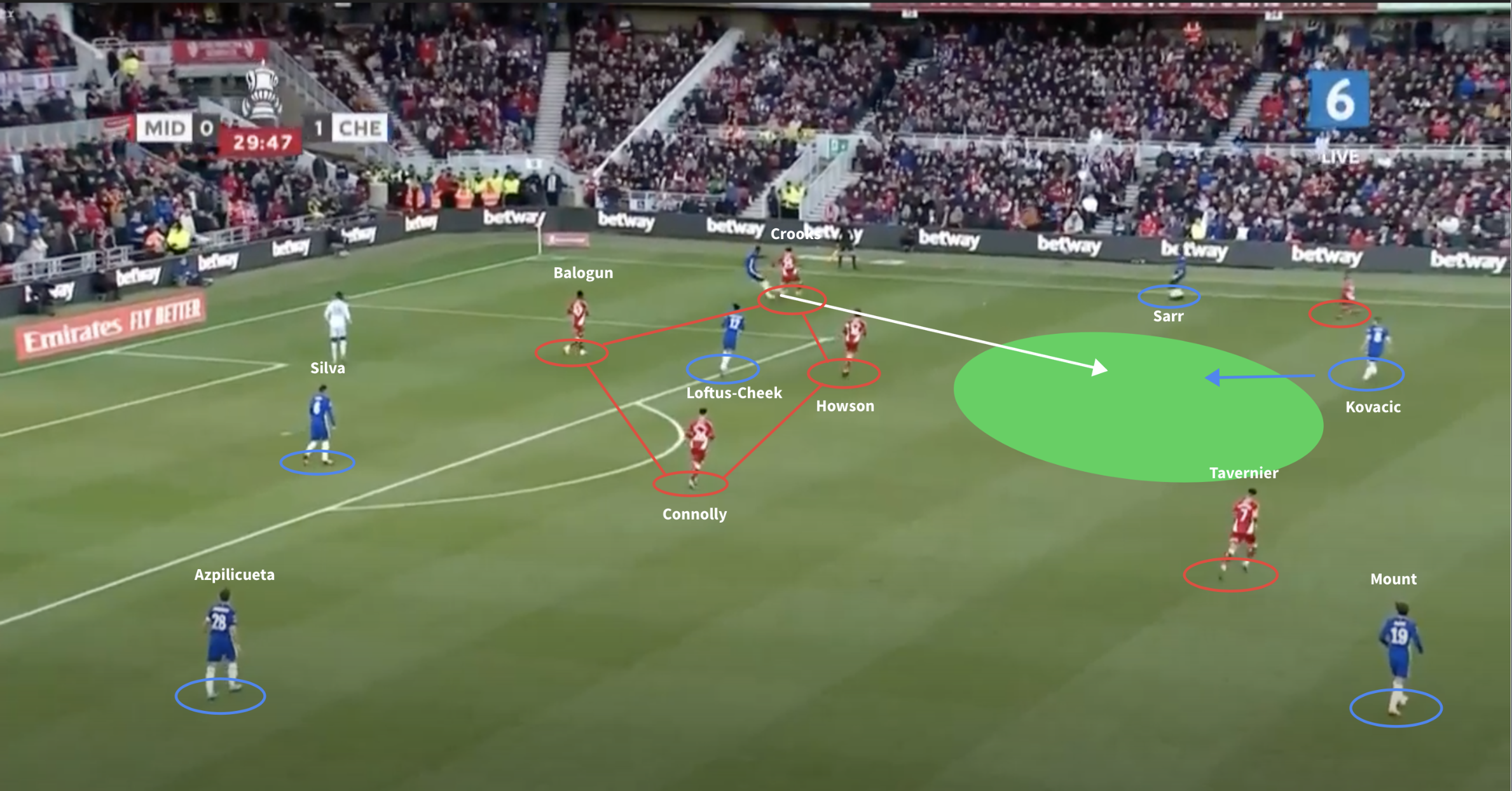 Loftus-Cheek was again content with merely attracting man-orientated pressure in order to generate space elsewhere, which Chelsea here profited from, courtesy of Howson’s positional error. Kovacic was thus permitted freedom to turn past the first line of pressure; his ball-carrying ability representing a serious threat to the home side. 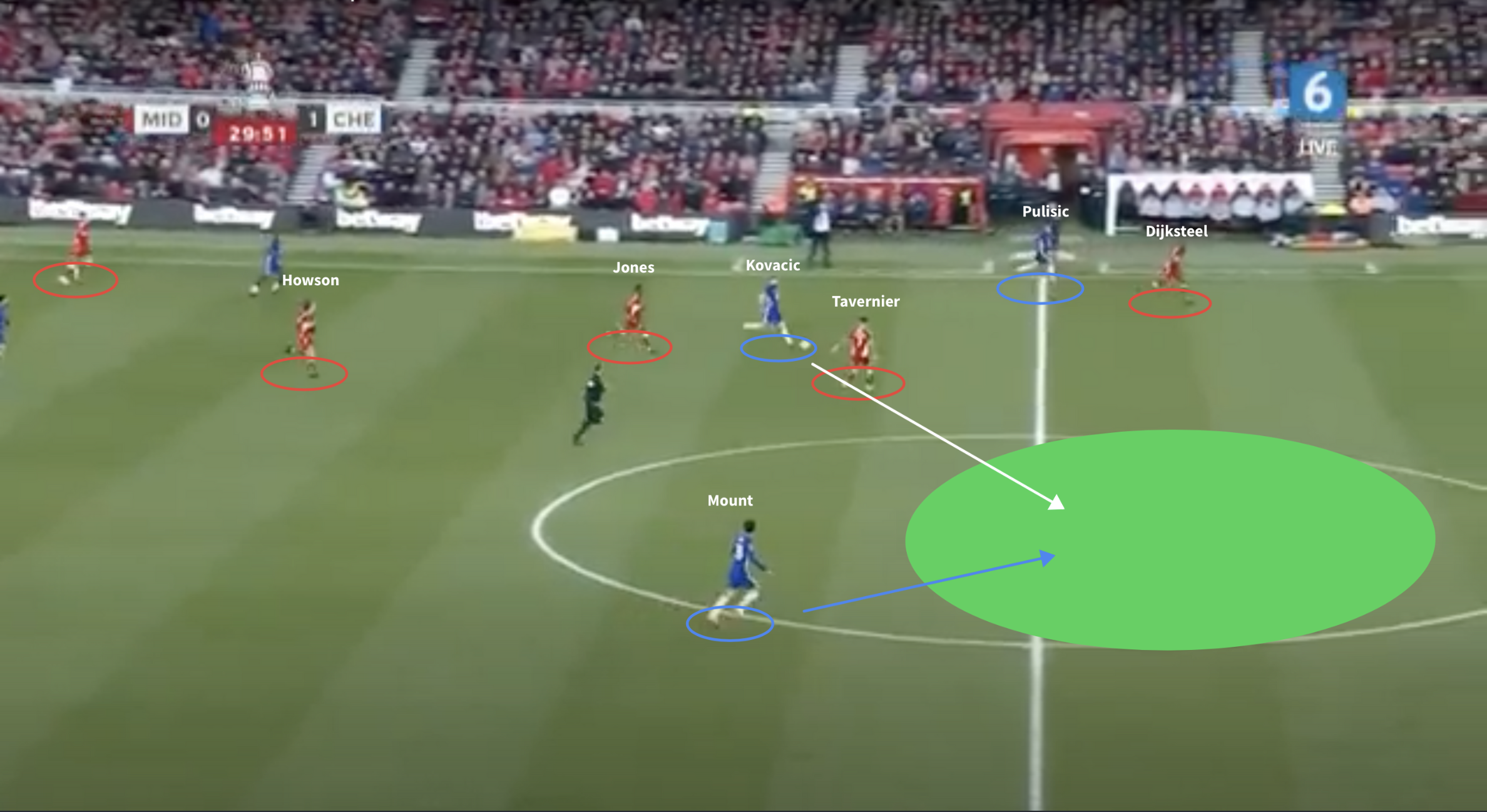 Kovacic’s goal-side positioning on Howson and Jones gave Tavernier no option but to horizontally engage, gifting Mount total control of the midfield third. Chelsea eventually worked the ball to Ziyech on the right, who used a rare overlapping run from Azpilicueta as a decoy to cut in and clinically double Chelsea’s advantage.

It was a rare out of possession lapse from Chris Wilder’s men, but by now Chelsea were motoring and had sobered the vociferous home crowd. Middlesbrough’s relative inability to securely circulate the ball awarded Chelsea several successful transitions, and they should have added a third before the break when Lukaku rounded the goalkeeper and saw his tame effort cleared off the line by Dijksteel after more good work from Ziyech.

Perhaps the most telling of Tuchel’s tactical tweaks on Saturday was fine-tuning Chelsea’s principles both in and out of possession to accommodate summer-arrival Romelu Lukaku into the system.

The Belgian was a more active figure in Chelsea’s transitional final third activities, particularly in the second half, as Tuchel abandoned his characteristic fluidity in attack in favour of wide combinations to create opportunities to progress the ball. Chelsea’s first goal in particular exemplified this approach and drew high applause from manager Tuchel, who had clearly emphasised the generation of viable crossing scenarios in the halfspaces as the best way to integrate his out of favour striker. 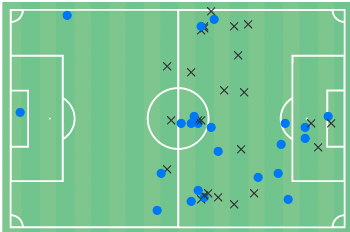 As illustrated above, Lukaku seldom contributed to Chelsea’s build-up play, but nonetheless offered a viable long-ball option to transcend the high Middlesbrough press; a selection that on occasion would allow Chelsea achieve numerical equality, rather than typical inferiority, in the midfield third. The Belgian also recorded three shots, more than any player on the pitch, and 48 touches.

Out of possession, Chelsea were more passive in their press but maintained lateral compactness, rather than expecting Lukaku to unrealistically adhere to an intense high-block approach. The result was a more controlled performance both in and out of possession than some of their previous fixtures when Lukaku has lead the line; particularly that abject winter period which saw Tuchel’s side surrender their domestic title challenge.

Middlesbrough again gave a good account of themselves, particularly out of possession. Wilder’s aggressive high block seldom allowed Chelsea’s specialist midfield three the opportunity to overwhelm his side. Boro will of course rue a singular first-half press that gifted Chelsea complete ascendency in this fixture. Their combination play down the right occasionally troubled this veteran Chelsea back line and they undoubtedly maintained their midfield compactness to ensure the match did not slip away from them.

Chelsea march onto another domestic cup semi-final, but it will be the ease with which they transition between tactical setups that will catch the eye of opposition managers. Tuchel seemingly has total control over his players and possesses a degree of tactical flexibility and maturity that his rivals may lack as we approach the business end of the season. Setting up against this Chelsea side is as demanding and unpredictable as any challenge in world football. 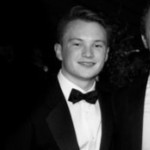