In this UEFA Champions League campaign, Group A is the group of death as it contains Manchester City, Paris Saint-Germain, and RB Leipzig. But people forget about the Juplier Pro League 2020/21 winner, Club Brugge. Philippe Clement’s side started the season by winning the Belgian Super Cup. In Europe, they shocked everyone by obtaining four valuable points from PSG and Leipzig with fewer star players.

Furthermore, their xGA in against PSG (0.76) and Leipzig (0.99) were very impressive, so what’s the secret behind their good results? This tactical analysis is a scout report that focuses on Clement’s defensive tactics, and how did his principles of play help the Belgian side to limit the best attackers in the world.

One thing that separated Brugge and normal underdogs were the height of the defensive lines. Even being the weaker side on paper, the players would not be happy to “park the bus” with everyone behind the ball. Instead, they pushed the block and last line into the central third and defended in higher areas. 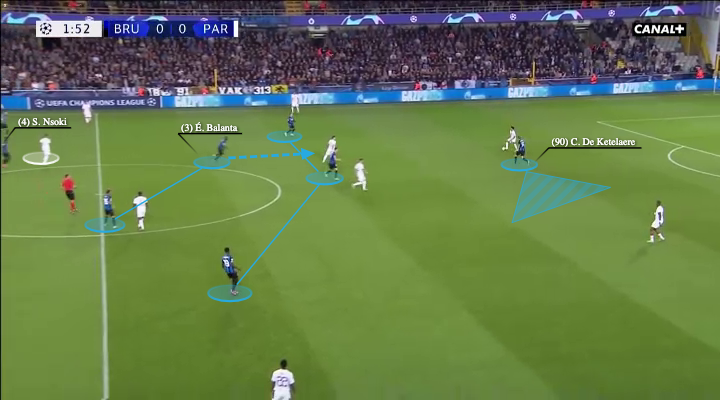 Although Brugge might not be pressing with an extremely high line in the offensive third, but they would try the best to keep the oppositions in one vertical half. Once the ball gets there, they would have numbers to close those flank spaces. Therefore, the job of the lone striker was to use his body angle to block the passing lane between centre-backs, such as Charles De Ketelaere above.

Brugge defended with a 4-2-3-1 shape initially with the attacking midfielder (Hans Vanaken) to close the opposition holding midfielder. If the number eight dropped to overload Vanaken, Brugge would react by using the defensive midfielder to press closed body as Éder Balanta did here. Meanwhile, the other midfielder should go inner to cover his teammates.

Also, the centre-backs must step up to close spaces in midfield when the Balanta was up. We will see more related concepts later.

Leipzig players thought they could not break the man-marking of Brugge, but that was partially accurate only. On some circumstances, Clement allowed his players to switch the defending targets as the man-oriented approach was not rigid. Since Balanta went out to close Ander Herrera before the above scenario, Brugge was in a 4-1-4-1 on that instance.

But football is a dynamic game. When Herrera simply positioned himself behind the second line again, the defence was broken as Balanta could not chase his target. From there, Brugge adapted by Mats Rits’ communication, who asked Balanta to cover Georginio Wijnaldum so he could press Herrera. It was the same pressing closed body concept.

Brugge should be given praises for not backing off after levelling against PSG. Even in the second half, they chose to defend higher spaces instead of staying deep and wait for the oppositions to come. After the break, PSG adjusted by dropping Danilo Pereira to form a three back in the build-up, but the affect was limited by Brugge’s press again.

Here, De Ketelaere initiated the press and forced PSG one side, but the opposition was clever by using the right-back to evade pressure, reaching Pereira.

However, Brugge was calm and Vanaken did well by waving another press with a change-direction run. That run was important as the skipper blocked the switch angle again, forcing PSG to go back on the side where many blue shirts were waiting for the press.

An important aspect of Brugge’s pressing was the subject of closing spaces. Since their players always stepping out from the initial position, spaces occurred behind or around the defence. Therefore, they must also close the corresponding spaces at the right moment.

Brugge’s midfielders were not tight in positionings as they were always pressing around, the opponents would also find their chance to break lines in the centre, such finding Herrera in this situation. In this case, Balanta must react instantly to close the Spaniard, forcing him out of that zone.

You can interpret the pressing/midblock of Brugge in a vertical chain, with each line covering other by closing spaces.

Of course, Brugge also had to defend in lower and wider areas as they were not dominant in terms of possession. They had an interesting structure to defend the flanks, and this limited the threat from Lionel Messi and Neymar. 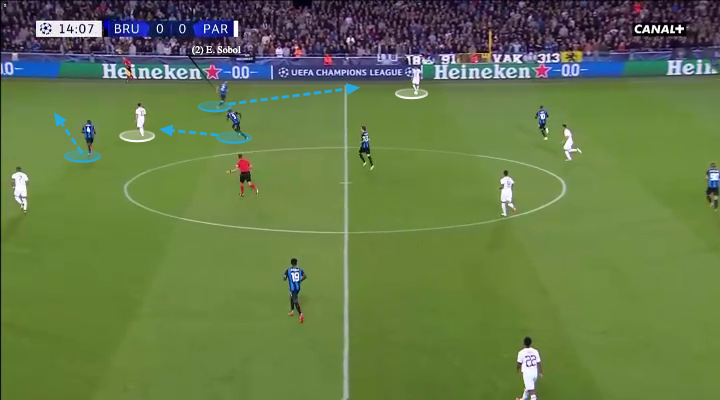 When the ball reached the wide zones where the wingers were bypassed already, Brugge often committed their full-backs to press. Of course, spaces would then appear behind the full-back, so they also needed the centre-backs or defensive midfielders to cover those spaces.

You can see how their defensive system operated in the screenshot above. Eduard Sobol stepped up to press the opposition, and so Stanley Nsoki and Balanta must go back to cover, especially this was the job of the defensive midfielders.

In the above image, it was a 3v3 on PSG’s left. You could see Brugge’s Rits and Kamal Sowah pressed their respective targets in a synchronized timing. Also, Clinton Mata tightly marked Neymar in the defence. When this three-man group stepped up together in the press, they could shut the passing option around the ball on time and make contacts. 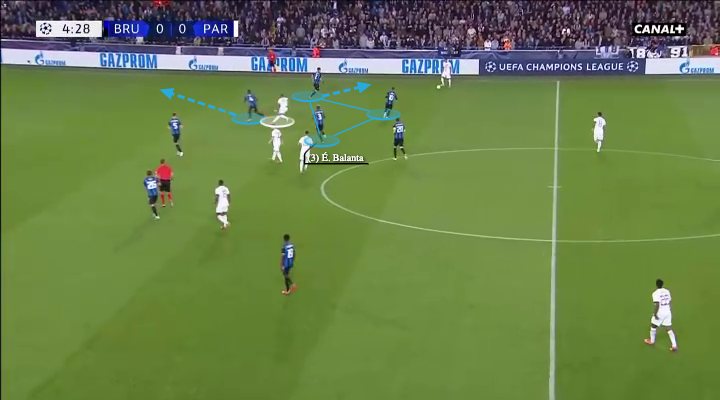 Since Brugge players also moved away from position to press in a lower block, teammates around also needed to close spaces accordingly. That’s why the triangular relationship of the three wide players was important, it allowed the defensive midfielders to block the opposition in the half-spaces.

Here, Sobol stepped up to press the wide player again. You could see Balanta moved back toward the half-space to shut the diagonal passing lane of the ball. Meanwhile, the centre-back (Nsoki) also moved back in advance to defend spaces behind, so they caged the highlighted PSG player and made sure he would not be free. 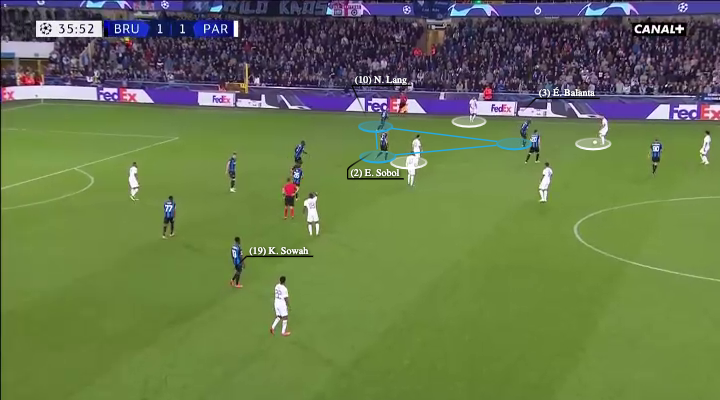 The three-man triangular defensive group could rotate but the same concepts must be hold in the wide defending. In the above situation, it was Balanta being the highest player, while Noa Lang was a bit lower to limit the wide spaces. That means Sobol should not stay at his left-back position, but being aggressive and step up to block the diagonal lane/half-spaces.

Also, the far-side should also commit and defend deeper, almost liked a winger. You could see Sowah was very low on the other side to allow the defensive line swinging towards the ball flank. 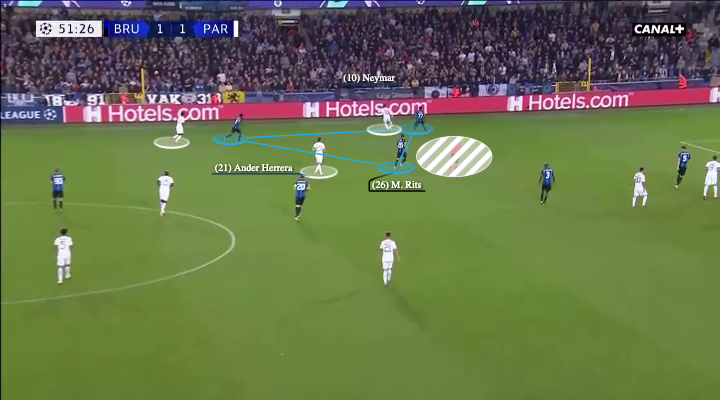 You could tell from the above example which Brugge was not defending in a rigid man-marking system. This time, PSG broke the lines and reached Neymar on the touchline, Mata already stepped up to limit his room to dribble; Sowah was covering the left-back also; then, Rits, the defensive midfielder, must move back to protect white spaces instead of attaching himself to Herrera.

Rits’ decision to defend half-spaces was important as he would block Neymar’s diagonal spaces into the centre, or you can interpret this as covering Mata. Brugge knew PSG possessed the most lethal and creative wrong-footed wingers in the world, so they must not let them play into the final third. Comparatively, letting Herrera to receive outside of the midfield line carried less threat, and they allowed Neymar to find the former Manchester United midfielder. From there, Brugge bought the time to reorganize while forcing the ball away from a more dangerous opposition. 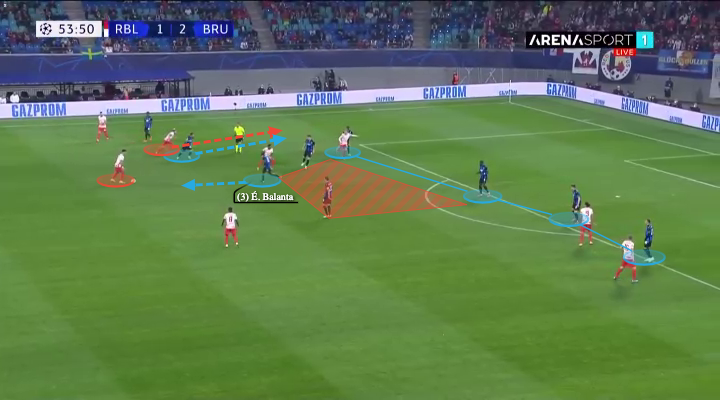 Even in a low block, Brugge would not put every player in the box to defend the crosses. Instead, they still apply continuous pressure on the ball to make things difficult for the opposition. For example, Balanta instantly jumped out to press the ball vertically once Dominik Szoboszlai received, which narrowed his angle of pass into red zone. They must make sure the lines were compact vertically so the opposition would not play into or through them in the defensive third.

Meanwhile, you could see the important coverage of Brugge defensive midfielders. On this occasion, the early run of Emil Forsberg brought away Mata, but Kevin Kampl dashed into spaces behind from the wide zone. It was the defensive midfielder’s (Rits) task to cover the wide space, Brugge players should be appreciated for not hiding in those situations, instead, watching each other’s back.

Brugge weren’t without their weaknesses, indeed, they had some because of the defensive principles. One of their problems was the channels between defenders. Their backline was always incomplete as defenders stepped away from position frequently, so centre-backs were often isolated from each other. 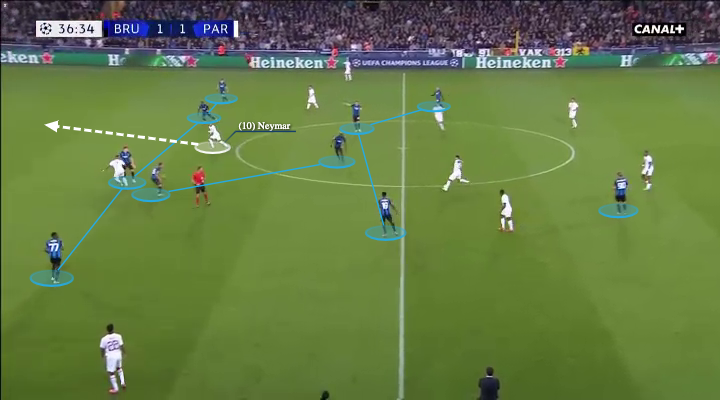 Therefore, even Brugge were not afraid of chipped balls and short passes into the centre in their defensive third, they were quite vulnerable against through passes from the midfield. This would be a big issue when the defensive midfielders did not give pressure to the ball.

In the above situation, the gap between centre-backs was criminally large as Nsoki was dragged away by Messi initially. While his partner was occupied by Kylian Mbappé, they could not stop the pass from Herrera to Neymar through the channel. Simon Mignolet must come out to sweep and clear the danger.

Again, it was the same issue that allowed Leipzig to reach spaces behind in this scenario above. Since the centre-backs always orienting themselves on a specific player, they were likely to be pulled out of position, hence, unable to chase the deep runners on his side.

Weakness 2: in the box

Another problem attributed to their incomplete backline was the defending in the box. On occasions, the defenders were isolated in the box and they would concede opportunities if the deliveries were accurate. 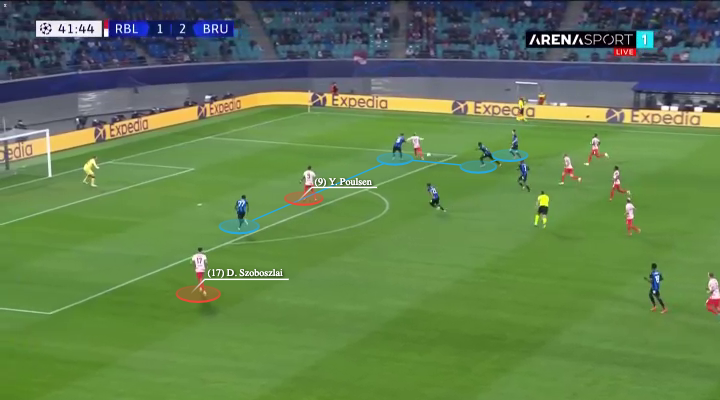 Here, they allowed Forsberg to receive in the penalty box but not being able to block the cross. The vacancy of the box was attributed to centre-backs stepping up too early, now Nsoki was eliminated from the defence and no one could help Mata in the centre. If the ball went to Poulsen or Szboszlai, it would be a very dangerous opportunity. 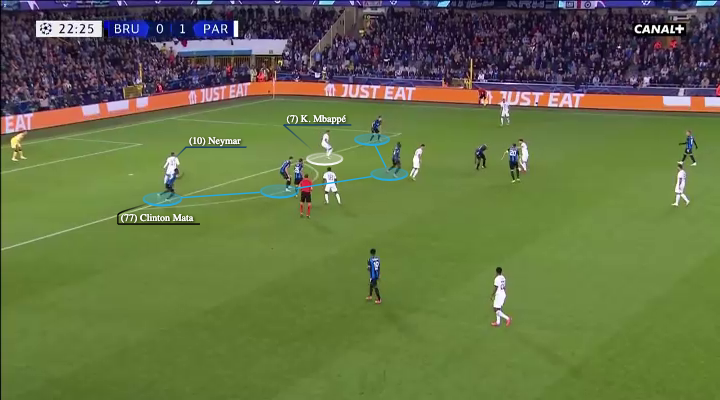 Another similar scenario in the above image. As Nsoki was a bit higher to close the target, he totally left Mbappé unmarked behind. When the oppositions had good dynamic such as PSG, they could use different timings of runs to break the offside traps. For example, Neymar’s early run dragged Mata down in the above image, so Mbappé stayed onside when he was released.

As we have shown in this analysis, Brugge’s defence was imperfect, they have clear principles of plays but also had some weaknesses. Nevertheless, the commitment of players in big stages was the key. In Juplier Pro League, sometimes Brugge were too casual without possession, but their standard in the UEFA Champions League escalated. Even conceding early goals in both games, they never lost faith and just played in their own way, stick together as a unit.

Clement’s side would play against City in back-to-back continental matches, it would be intriguing to analyze how would Pep Guardiola handle the block of Brugge! 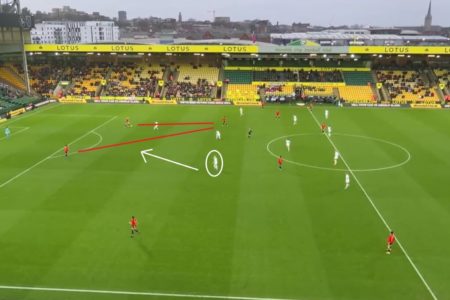