In the 6th game week of the 2020-21 Danish Superliga, league leaders Brondby hosted defending champions Midtjylland in a hugely anticipated clash. Brondby after having a perfect start to the season suffered their first defeat to second-placed SønderjyskE last week. They will be hoping to get back to winning way after this match.

Midtjylland, after improving their domestic form after a first game week loss came crashing down against Atalanta in their Champions League debut. They would also like to put that loss behind and continue their recent domestic form. This tactical analysis will look into the tactics deployed by both the teams. Let’s begin the analysis.

Brondby lined up in their traditional 3-5-2 system that has been very successful for them this season. They made a single change from their 2-0 loss against SønderjyskE, bringing in Andrea Pavlovic for Simon Hedlund. 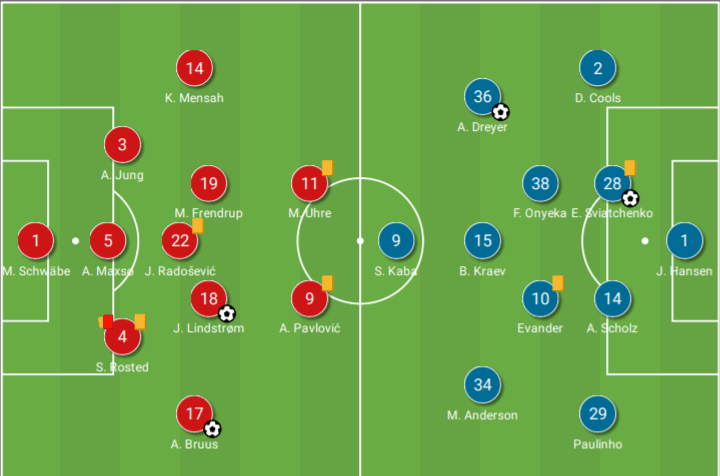 Midtjylland, on the other hand, made 4 changes to the side that lost 4-0 in the midweek against Atalanta. Winger Anderson, right-back Dion Cools, Evander and Bozhidar Kraev made their way into the lineup.

Brondby mostly looked to play out from the back when they had possession. Their tactics were to draw the Midtjylland’s midfield and forward line to the press high and then launch a long ball to the forwards and isolate them with the defensive lines in a 1v1 or 2v2 situation. In this example, we can see that Paulinho, the left-back goes higher to press the Brondby wing-back. Now another midfielder drop at the same time (black-circle) and Paulinho is left in two minds as to press them. The CB who has possession immediately launches a long ball. 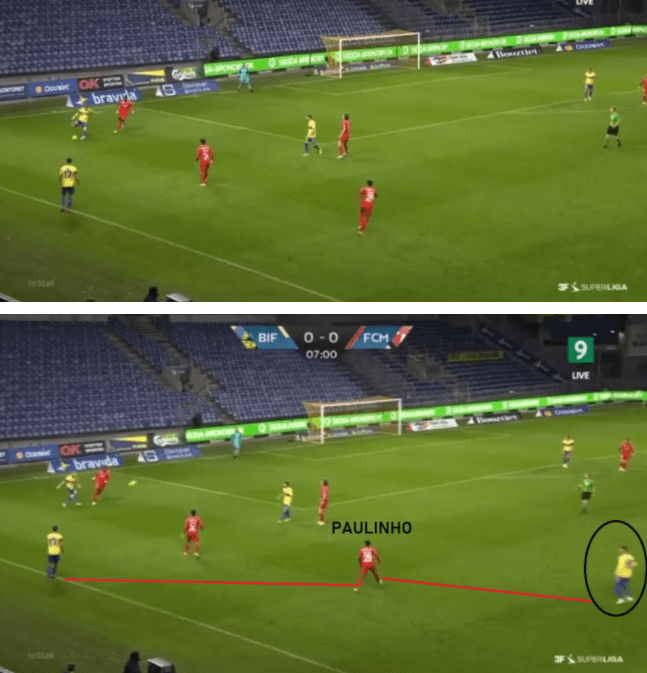 Brondby’s wing-backs pushed higher like any other wing-backs in a 3-5-2 system to make it a 3-2-5 with possession. The high positioning of the WBs forced Midtjylland backwards at times, and since they stayed wide, they either were left free, or they forced the defence to stretch. This also led to the first goal as Bruus staying wide meant that Midtjylland ignored him completely and he was left without a marker. A simple ball was played to him, and he immediately took a shot to score their first goal. 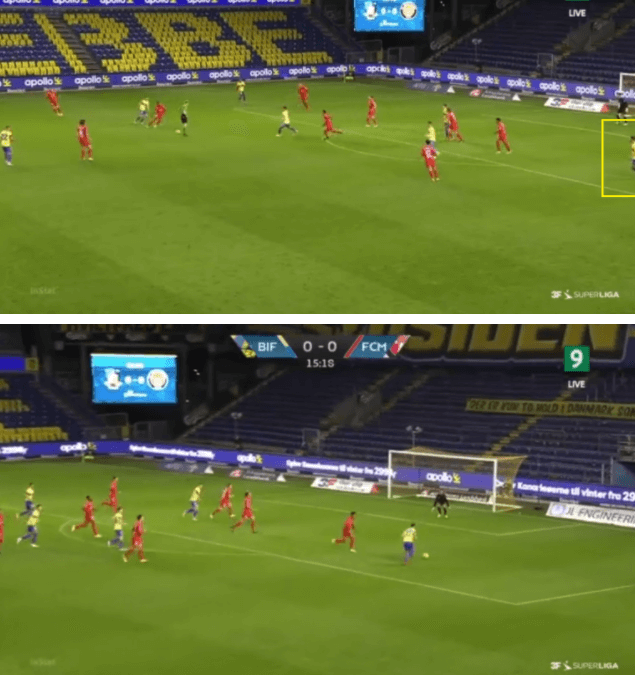 They would use these wide regions well as they looked to get into the half-spaces or closer to that and immediately play a cross into the box. This caused Midtjylland some issues, but they were able to deal with the majority of it throughout the game. 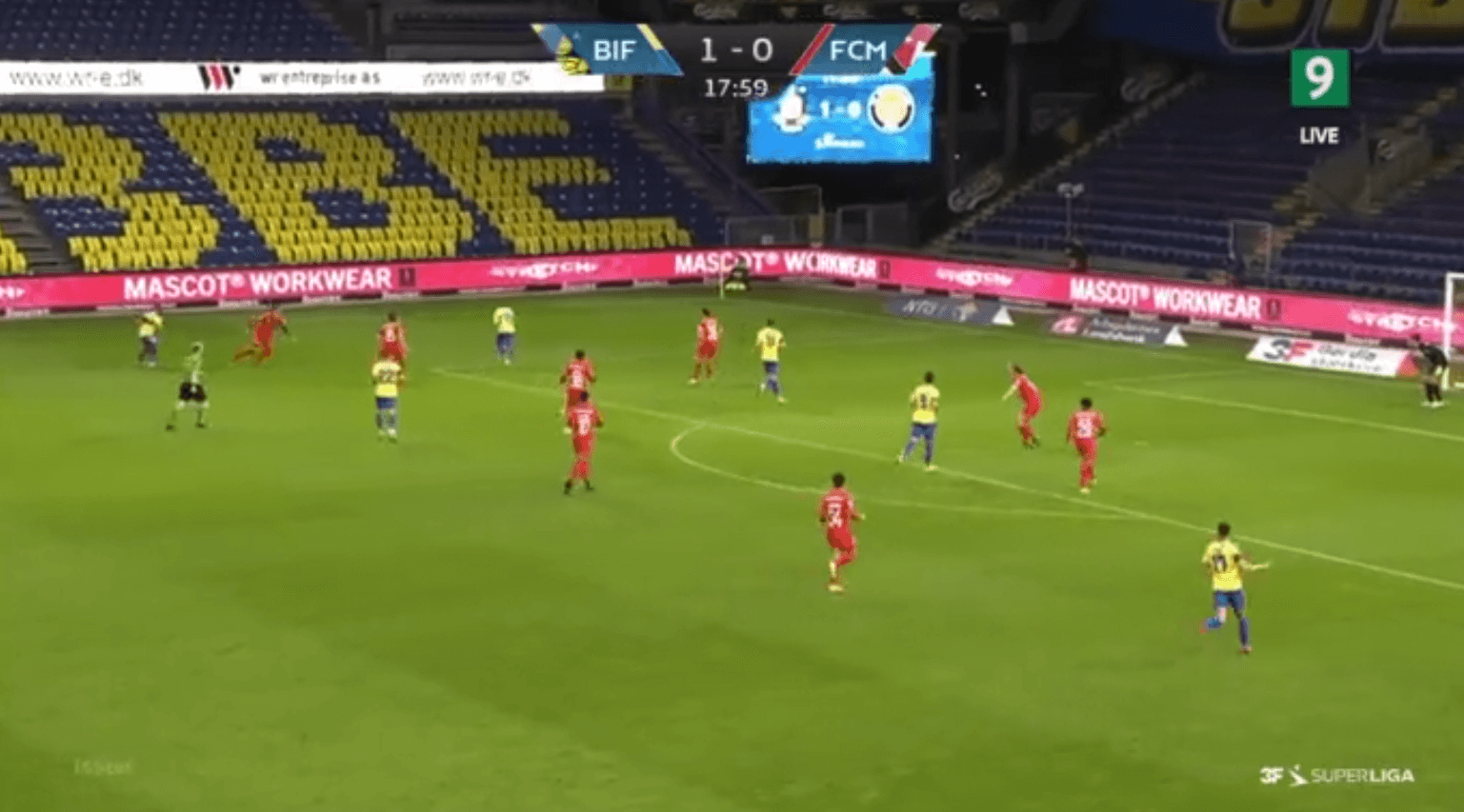 Their second goal was eventually scored from a cut-back in the wide right region during the second half. Brondby break at a good pace and find themselves with 2 runners inside the box and the Midtjylland players still finding their positions after tracking back, and one of the runners stops immediately to get the ball into space, as shown in the example below, and he receives the ball. He shoots without anyone closing him from forward as well as from behind. 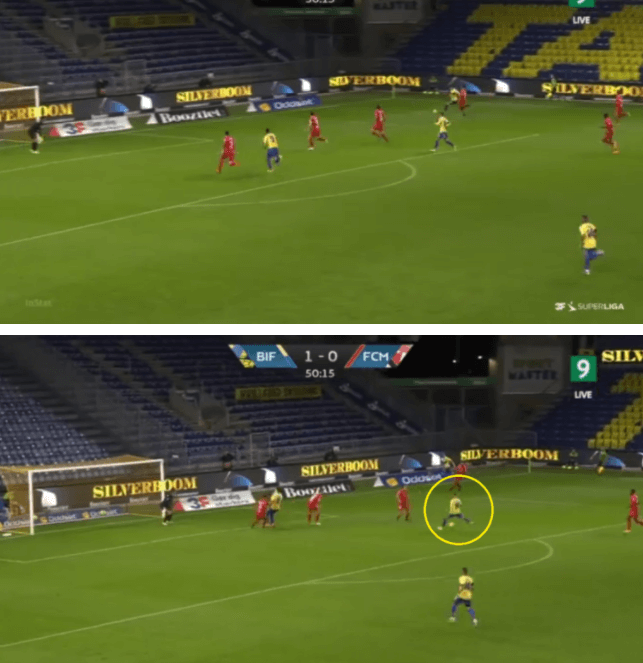 Midtjylland, without the ball, pressed high up the pitch as Brondby looked to play out from the back numerous times. But what they focused on is cutting out the passing lanes instead of committing too many men forward. The image below shows how efficiently they cut out the passing lanes and made sure the Brondby players don’t build from the back. This method always helps the pressing team to maximize the press with minimum players and makes sure that sufficient players are left behind when the press is bypassed. 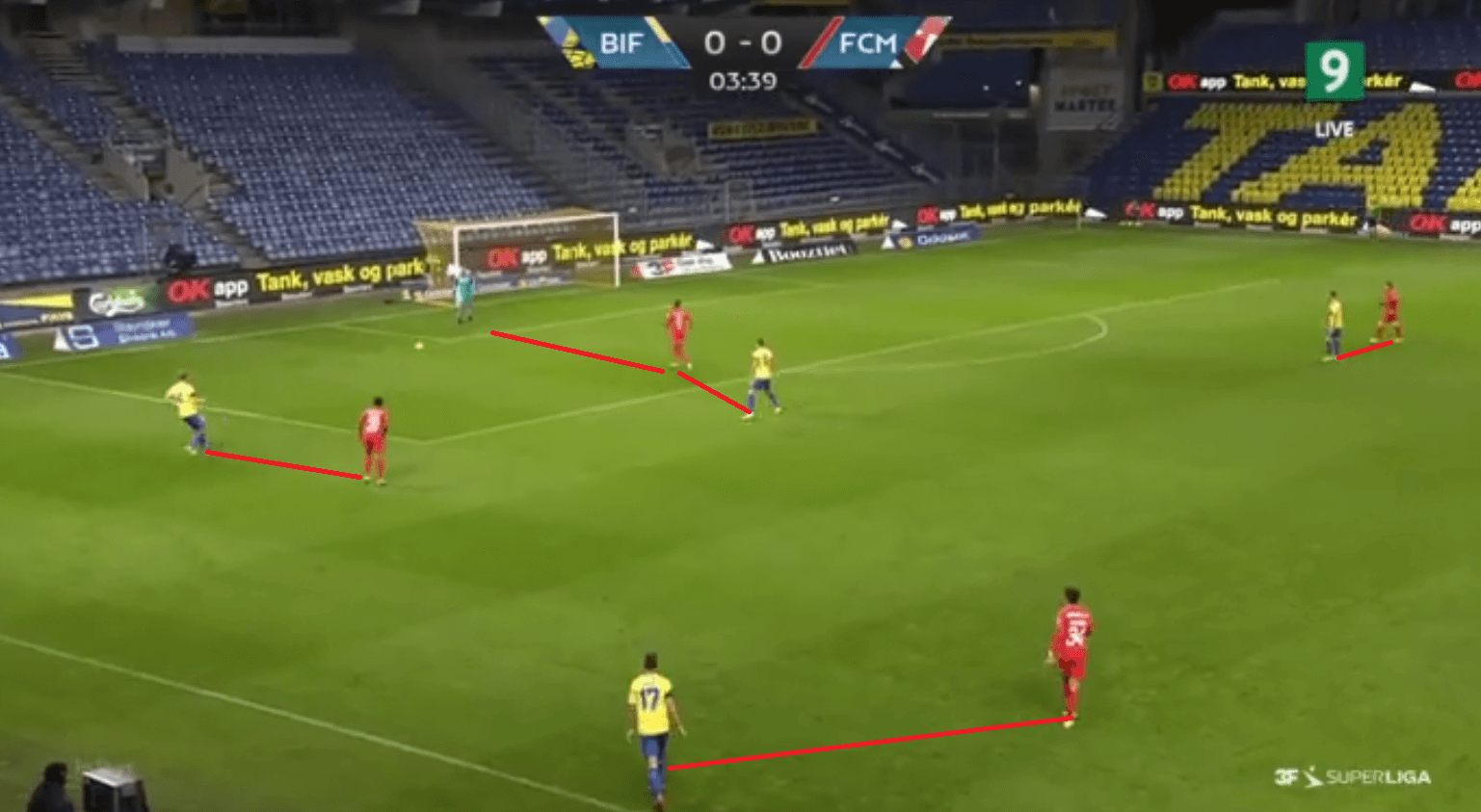 Throughout the game, the defensive line looked a little disjointed as players would sometimes leave their position and open spaces for others to run. The image below is an example of that. The Midtjylland defenders follow his striker, but he is a little late in making the challenge, and now his partner has made a run into space, and the ball is flicked on to his path. 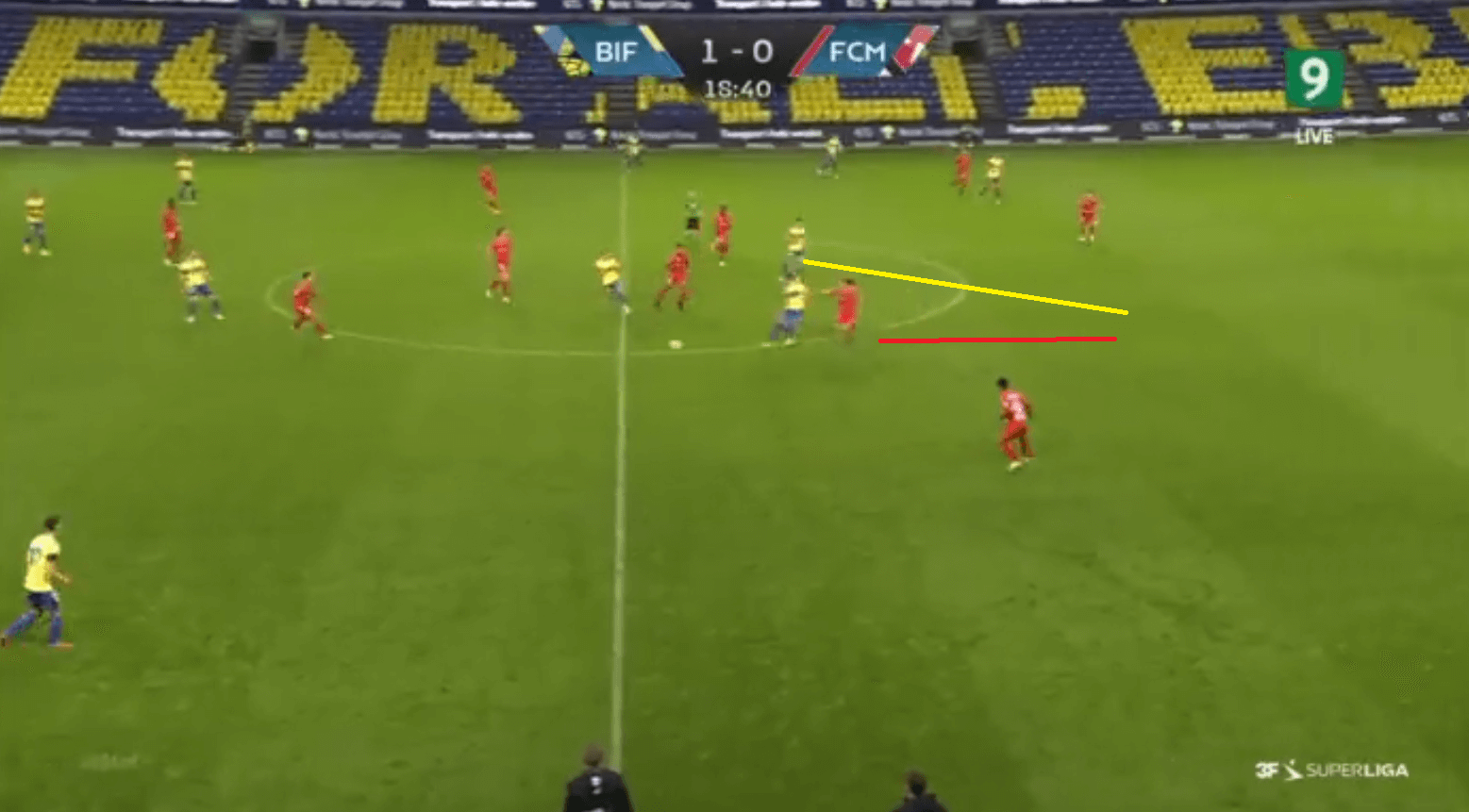 Midtjylland also tried to build out from the back when they had possession. Since Brondby pressed high with man-man, about which we have discussed in the next section, Midtjylland tried to manipulate the Brondby defence with movements and positioning of their players across the pitch. In this example, we can see that as a wing-back number 17, Andreas Bruus, of Brondby had to press the full-back having the ball. But due to the presence of the forward Mikael Anderson(red circle) very wide, he has to stay back as if he went forward then Anderson would have a lot of space to work with. 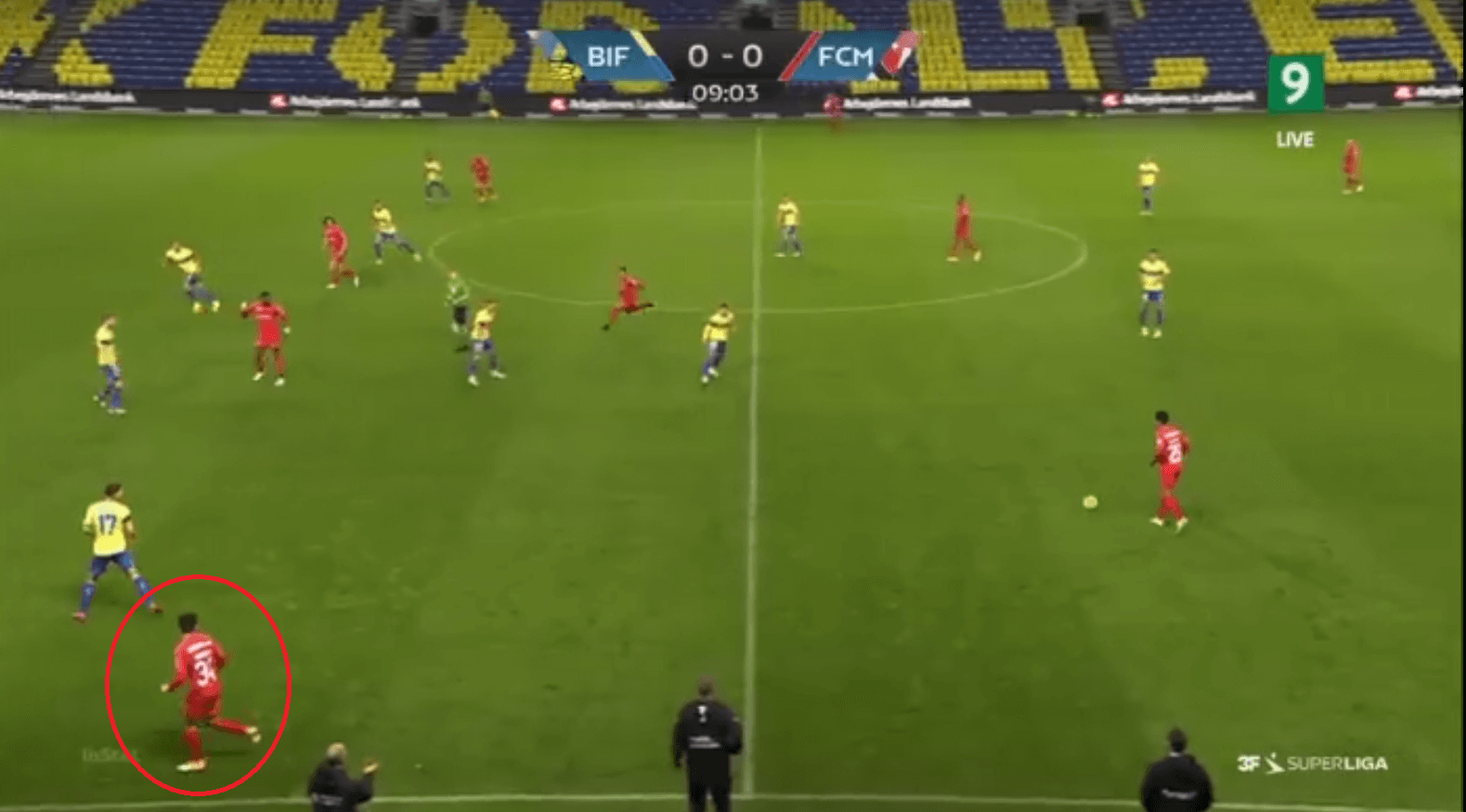 They would also look to try to overload the wings by asking their CAM (red circle), Bozhidar Kraev. This means that they would get a 3v2 advantage, and also playing triangles can easily manipulate the opposition. They also asked one of their CDM, mostly Onyeka, to drop in between the CB in order to create a 3v2 advantage and build easily as the game progressed. Therefore, the centre-backs now moved wide to the half-space due to the extra presence. 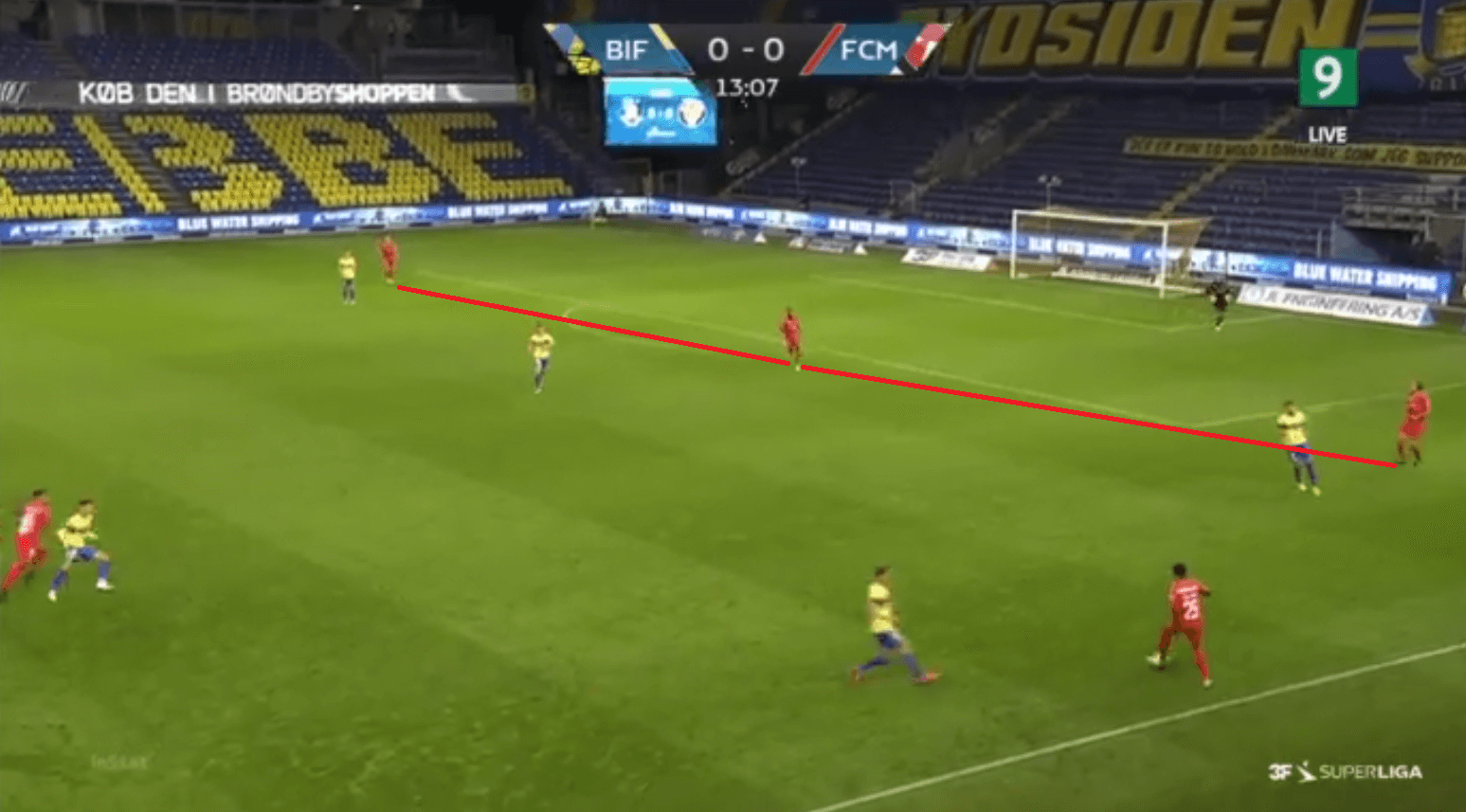 Now with Brondby pressing man-man they also quickly asked the midfielder who kept tabs on Onyeka to go high and press him. Likewise, the wing-backs pressed the full-backs, and this is where again Midtjylland manipulated the Brondby defence as a long ball to their target man Sory Kaba would be deflected on the path of a running forward. In the example below, Anderson makes a run into space behind the defence after Kaba has deflected the ball. 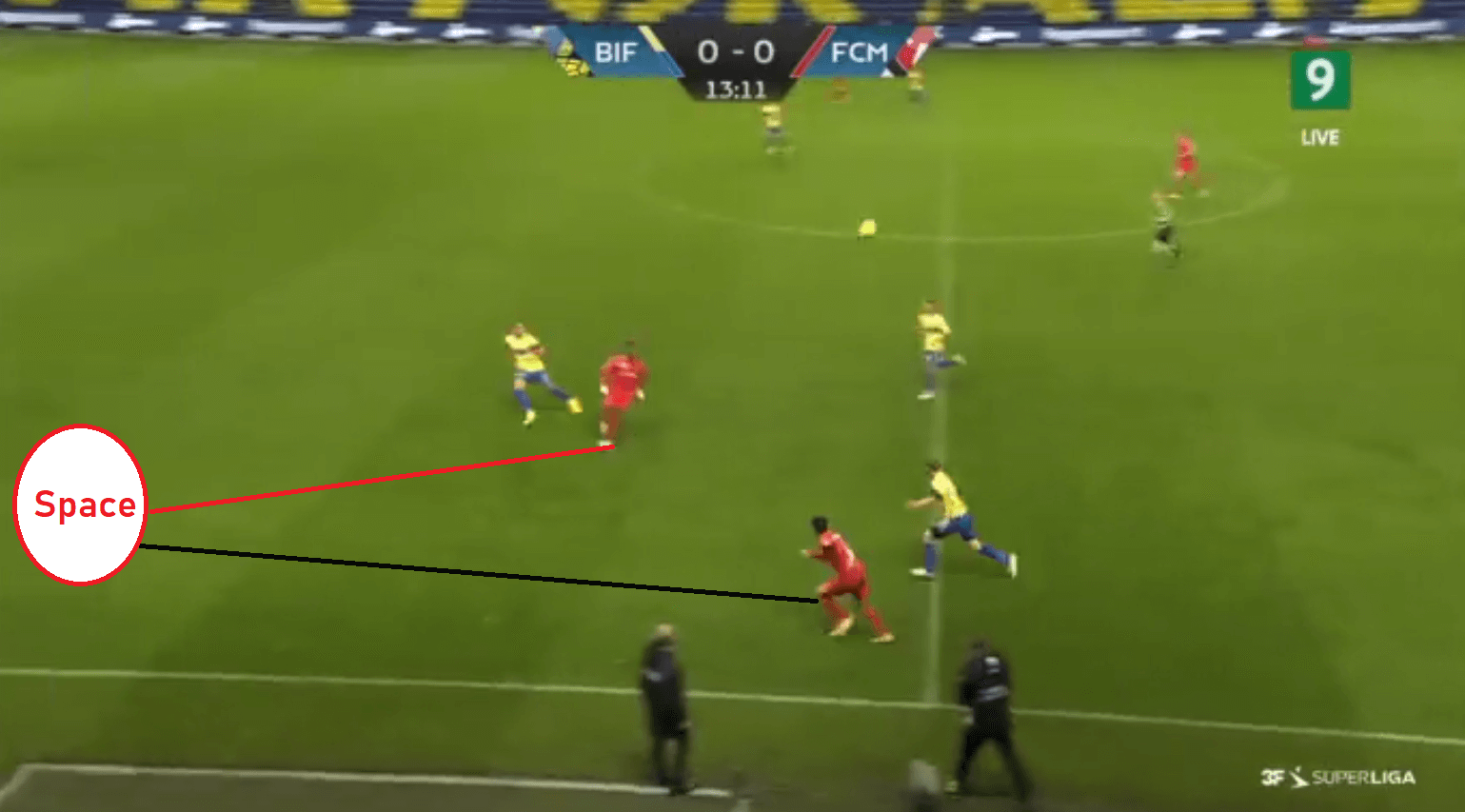 We talked about the winger staying wide and at the blindside of the wing-back to stretch the defence. This strategy eventually paid dividends as their first goal came from this as a cross into the box wasn’t cleared by Mensah, and it fell into the foot of Dreyers who scored the goal with a fine finish. The added advantage of staying wide is that once the winger receives the ball, he would cut inside from these wide positions and that would open space for the overlapping of the full-back. This way, Midtjylland were able to create a good few chances in the game.

Later they won from a corner that saw them use a good set-piece technique to win the game. In the image below, we can see that apart from the 3 Midtjylland players getting man-marked the other Brondby players completely in a zonal system overcrowding the six-yard box. This left a free man (number 28) without getting marked, and he created a 2v1 situation with his teammate for a marker. And that teammate blocked the markers run, and it left Sviatchenko (number 28) to take a header and score the winner. 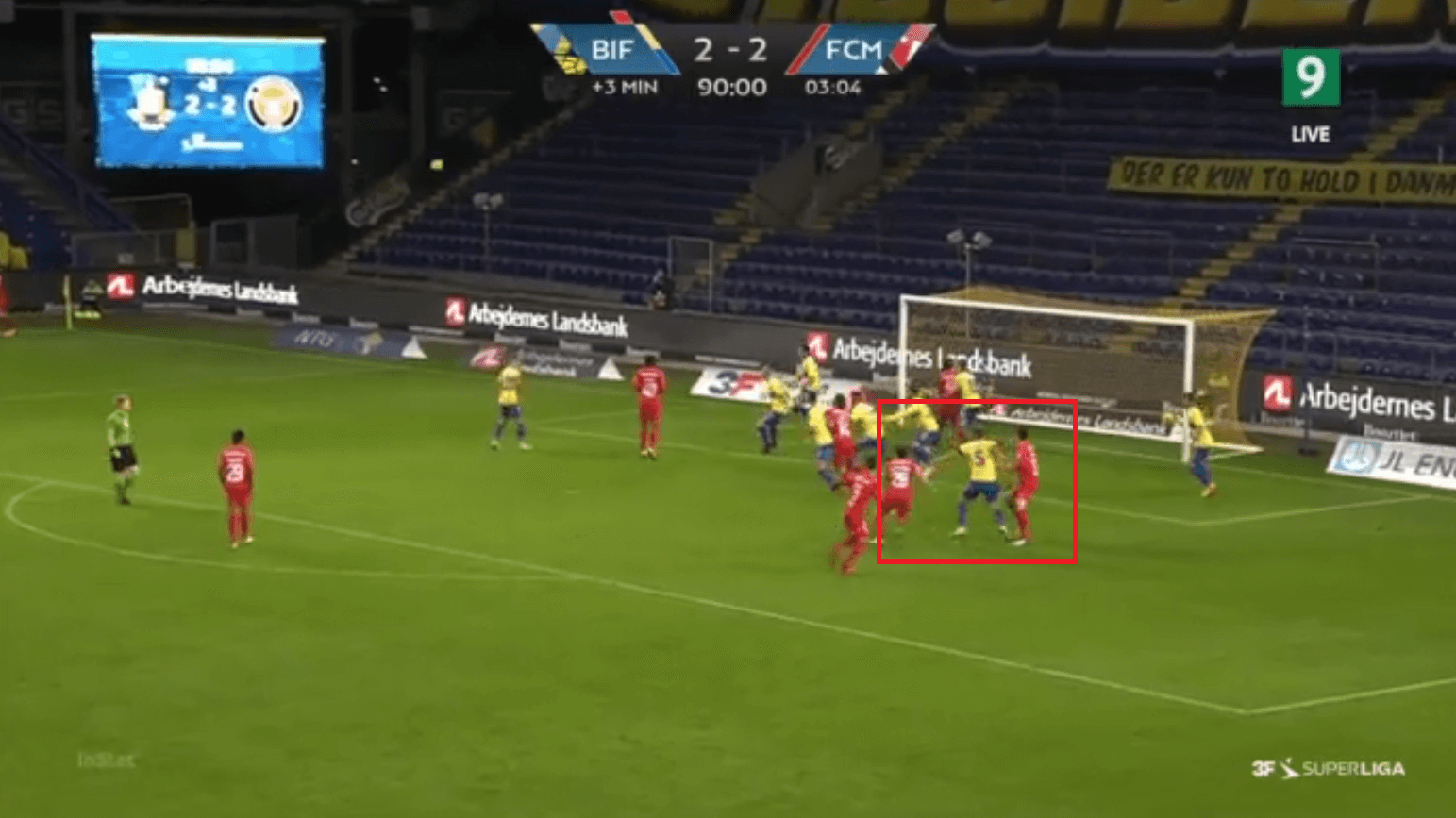 Without possession, Brondby pressed high in their 3-5-2 formation. Since Midtjylland’s shape looked somewhat like a 4-2-3-1, Brondby 3-5-2 made sure that each player was man-marked as the 4-2-3-1 when reversed would look like a 3-5-2 formation. Their two strikers pressed the two centre-backs, the wing-backs pressed the full-back, and the CDM marked the CAM, with the other two central midfielders marking and pressing the 2 CDM of Midtjylland. The example of the high press is given below. 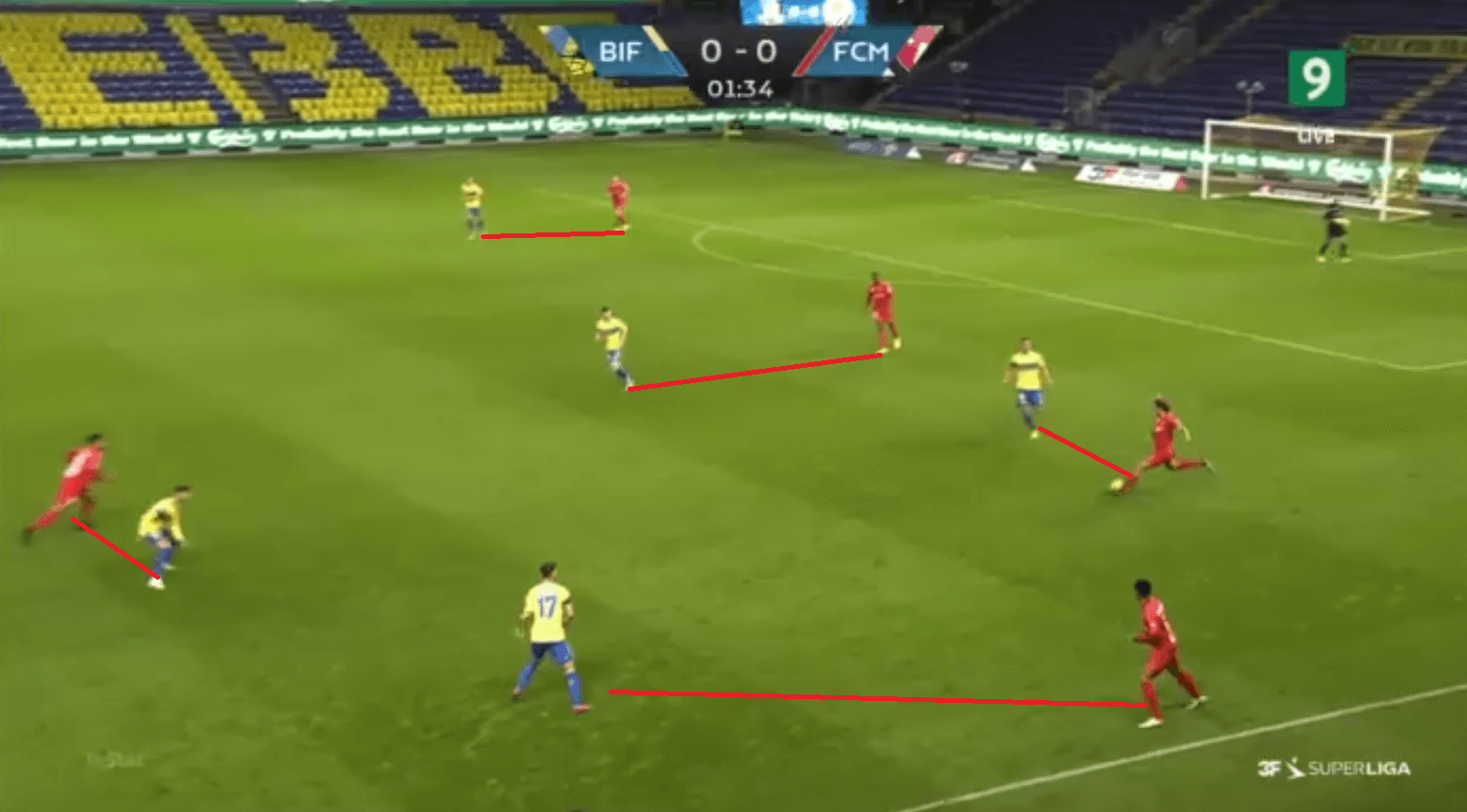 If they failed to get the ball high up the pitch, Brondby would fall back into a flat 5-3-2 formation and also they formed a high-line to not only make sure offside trap is played but also that the distance between the lines is less and the Midtjylland players do not get a lot of time on the ball in between the lines. 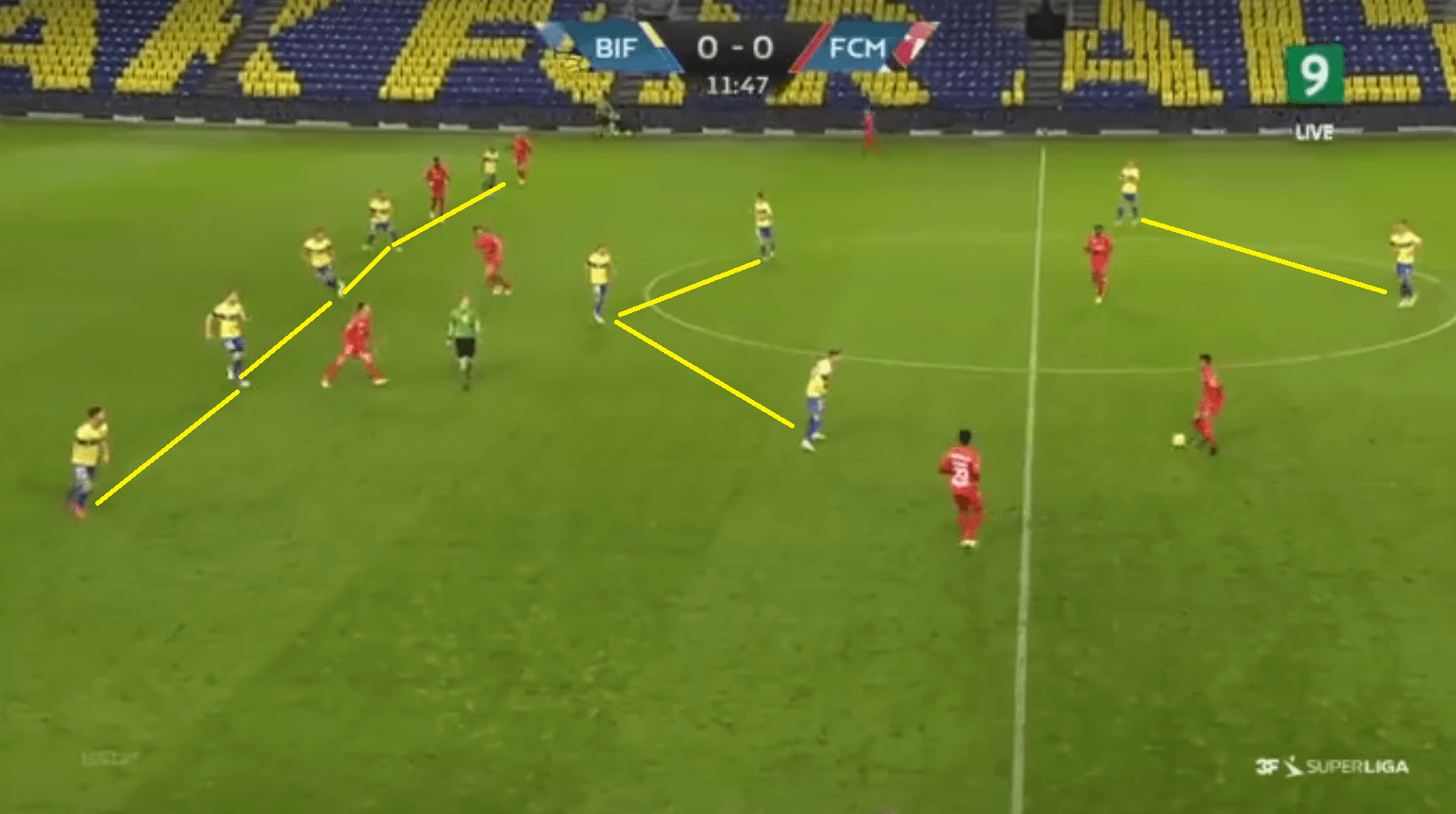 But this distance in between the lines was not always visible as sometimes the defensive lines failed to push forward along with the attack and the midfield lines. This left a huge space in the centre of the pitch with no Brondby players covering the space there. 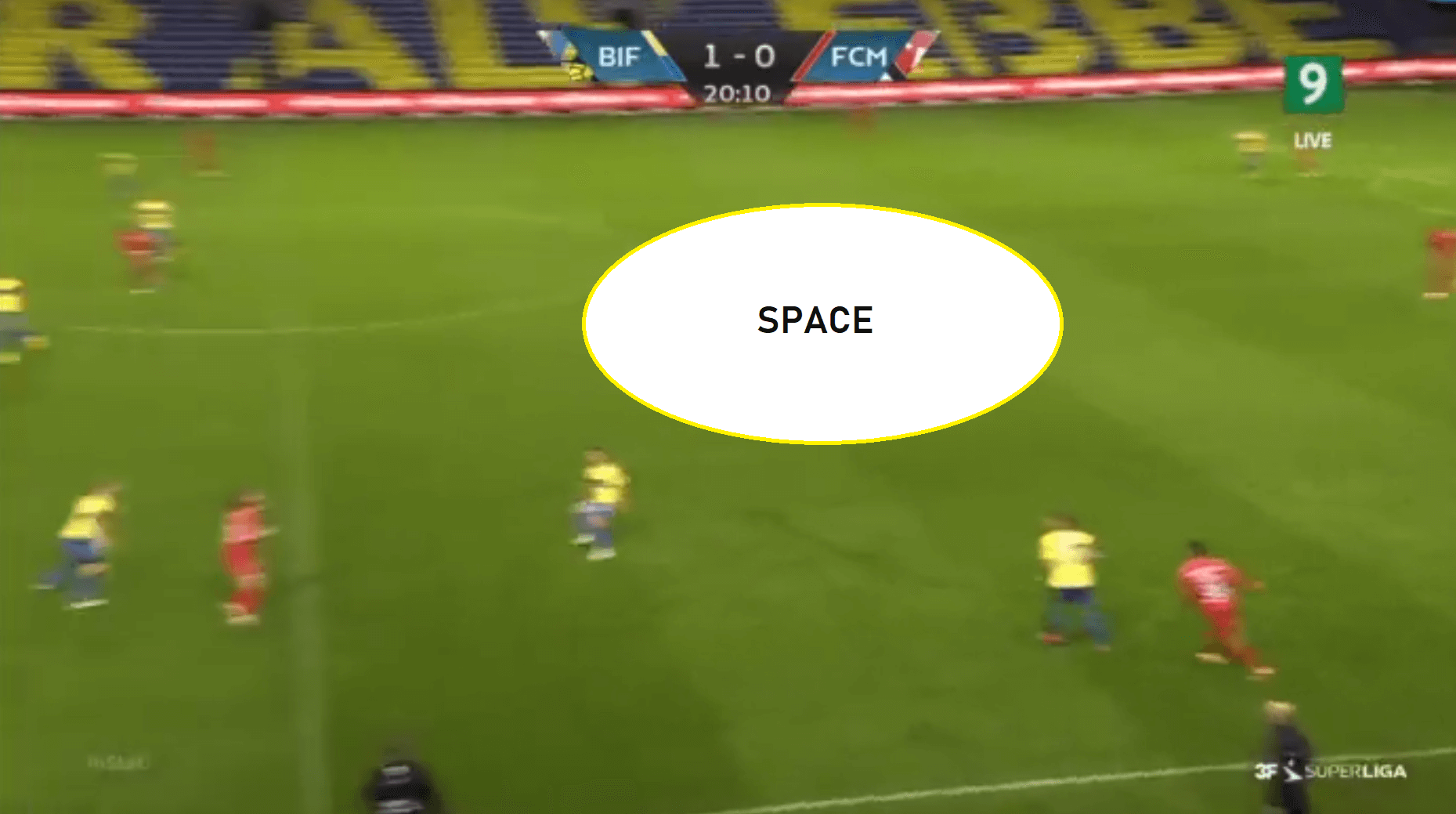 After the red card to Sigurd Rosted, they had to switch to a 5-3-1 formation with a central midfielder dropping into the defence and one of the forwards now playing in the central midfield. This gave Midtjylland advantage as they no longer required a midfielder to drop off into the defence to create a numerical superiority and it ensured they could commit men forward as Brondby decided to play in a low block too. 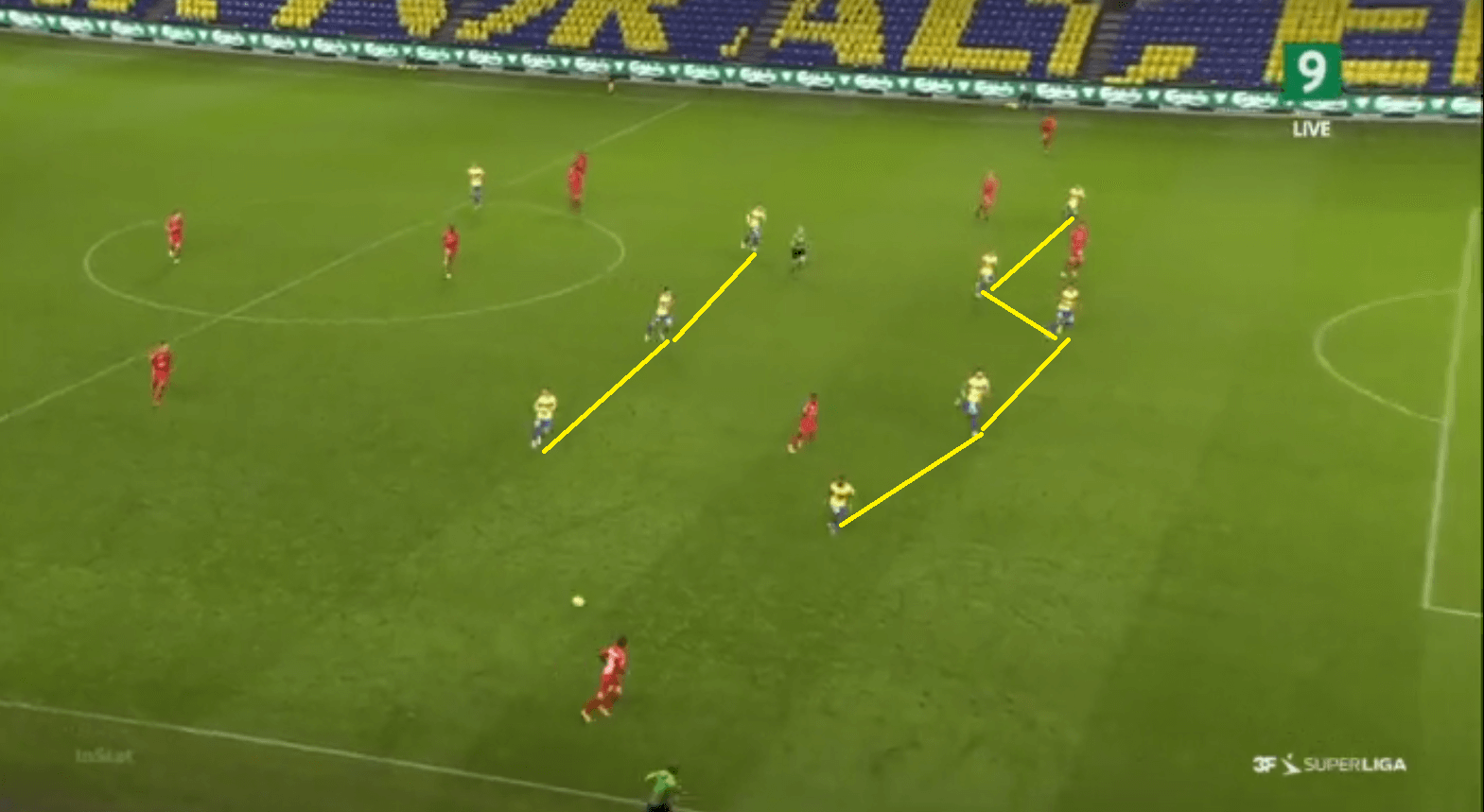 The image above shows a disjointed defence, and this was visible throughout the last 10 minutes of the game. Midtjylland were able to easily get into these spaces around the defence that crumbled under pressure. 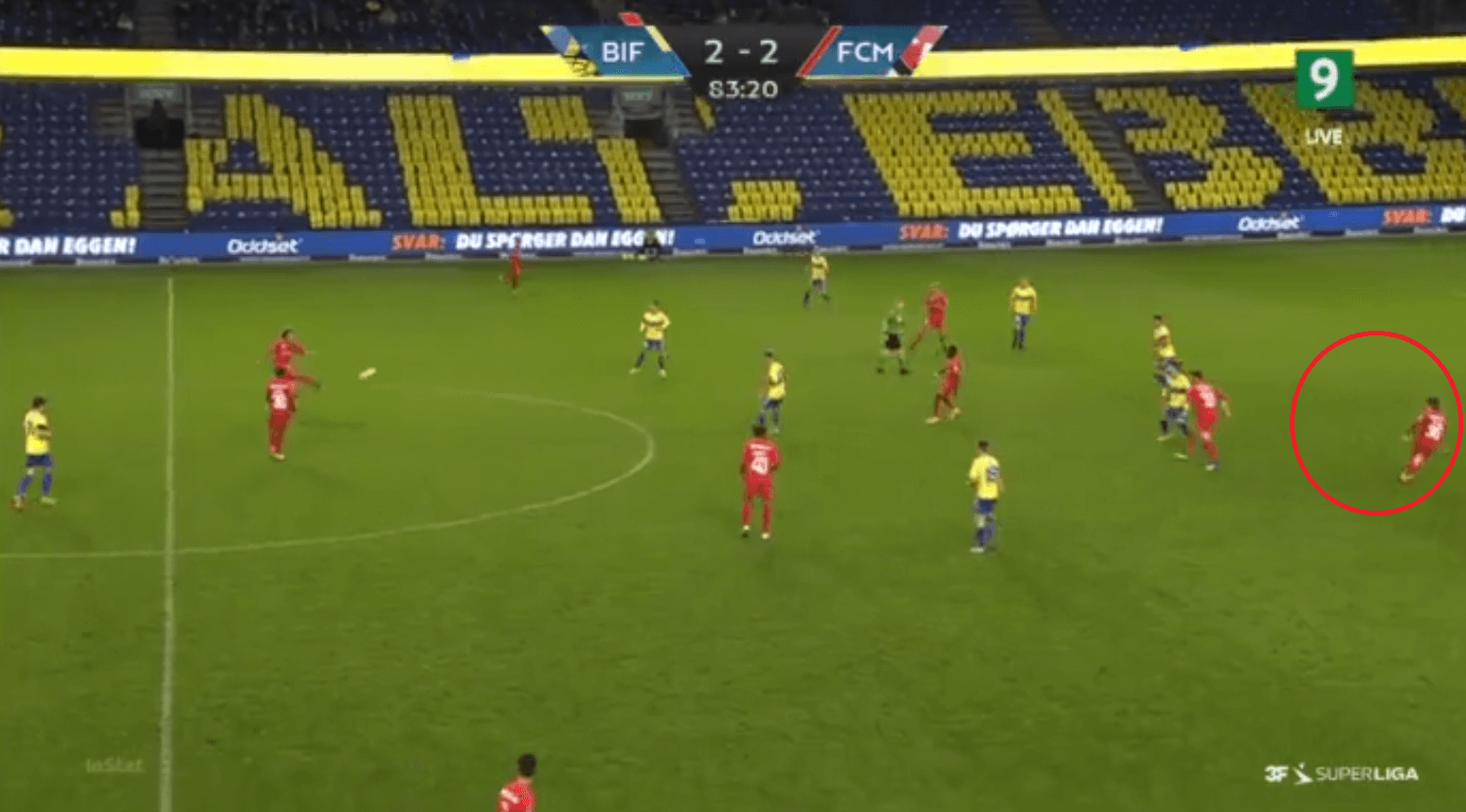 The other 4 defenders going forward in the above image but still, Dreyers (red circle) is able to beat the offside trap as the wing-back Mensah does not follow the line and plays him onside. This led to a shot eventually and a chance for Midtjylland.

Midtjylland left it late to complete a very good comeback from 2-0 down to clinch the 3 points and move a point ahead of their opponents, and the same as that of 1st placed SønderjyskE. Though Brondby played very well until the 60th-minute mark, they crumbled under pressure making individual blunders including 2 from their own keeper to eventually lose a well-contested clash. Midtjylland, having huge games against Liverpool and Ajax in the next two weeks would be boosted by a spirited performance.