Both teams have been in good form domestically with Monaco winning three out of their last five matches and Lille were in a four-match winning streak.

Despite the two teams’ similar form and similar overall player quality, it as was clear which team had the better tactics. A comfortable 0-3 away win for Lille ensured them a ticket to the quarter-finals thanks to their brilliant performance. But what went wrong for Monaco in this seemingly evenly-matched clash?

We’ll take a closer look at that in this tactical analysis. 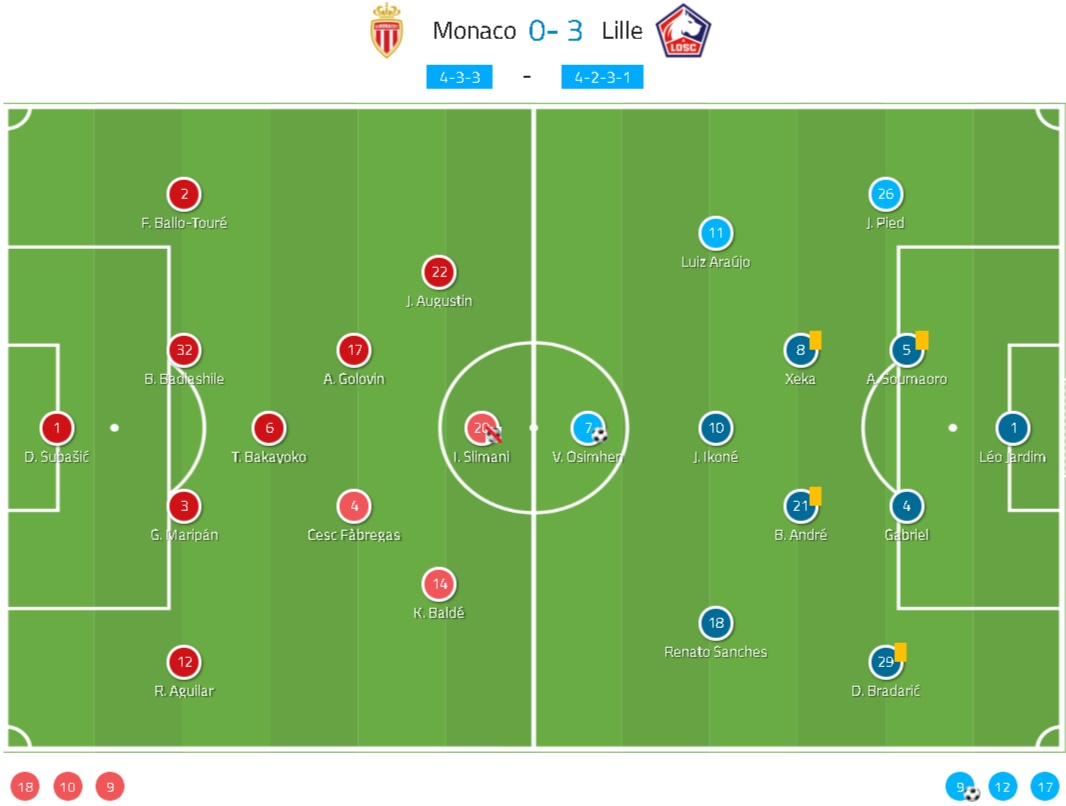 Leonardo Jardim used a different system in this game. Going with a 4-3-3 with Islam Slimani up front, accompanied by Keita Baldé and Jean-Kévin Augustin on the right and left-wing respectively. They previously played with a 4-4-2 system the last time out when they drew away against Angers.

Tiémoué Bakayoko and Aleksandr Golovin retained their spot in the centre of the field while Cesc Fàbregas came into the starting 11, completing the three-man midfield. Guillermo Maripán was the only defensive player that retained his spot in the starting 11, while Ruben Aguilar, Benoît Badiashile,  Fodé Ballo-Touré, and Danijel Subašić all started the game, replacing Jemerson, Kamil Glik, Gil Dias, and Benjamin Lecomte respectively. A bit of a revamp for Jardim’s side coming into this game.

Christophe Galtier, meanwhile, opted to go back to his favoured 4-2-3-1/4-4-2 system having tried 3-5-2 and 3-4-3 for several games in the UEFA Champions League and Ligue 1. Results haven’t been so friendly for them at that time, meanwhile, since going back to their familiar system, they have won every game except one (lost to Chelsea away on 10 December).

Several changes in personnel can be seen although key names like Victor Osimhen, Jonathan Ikoné, Gabriel Magalhães, Benjamin André, and Renato Sanches still maintained their spot in the starting lineup.

Galtier’s side were very solid defensively in this game. Their superb defensive organisation was enough to keep out a rather productive Monaco. 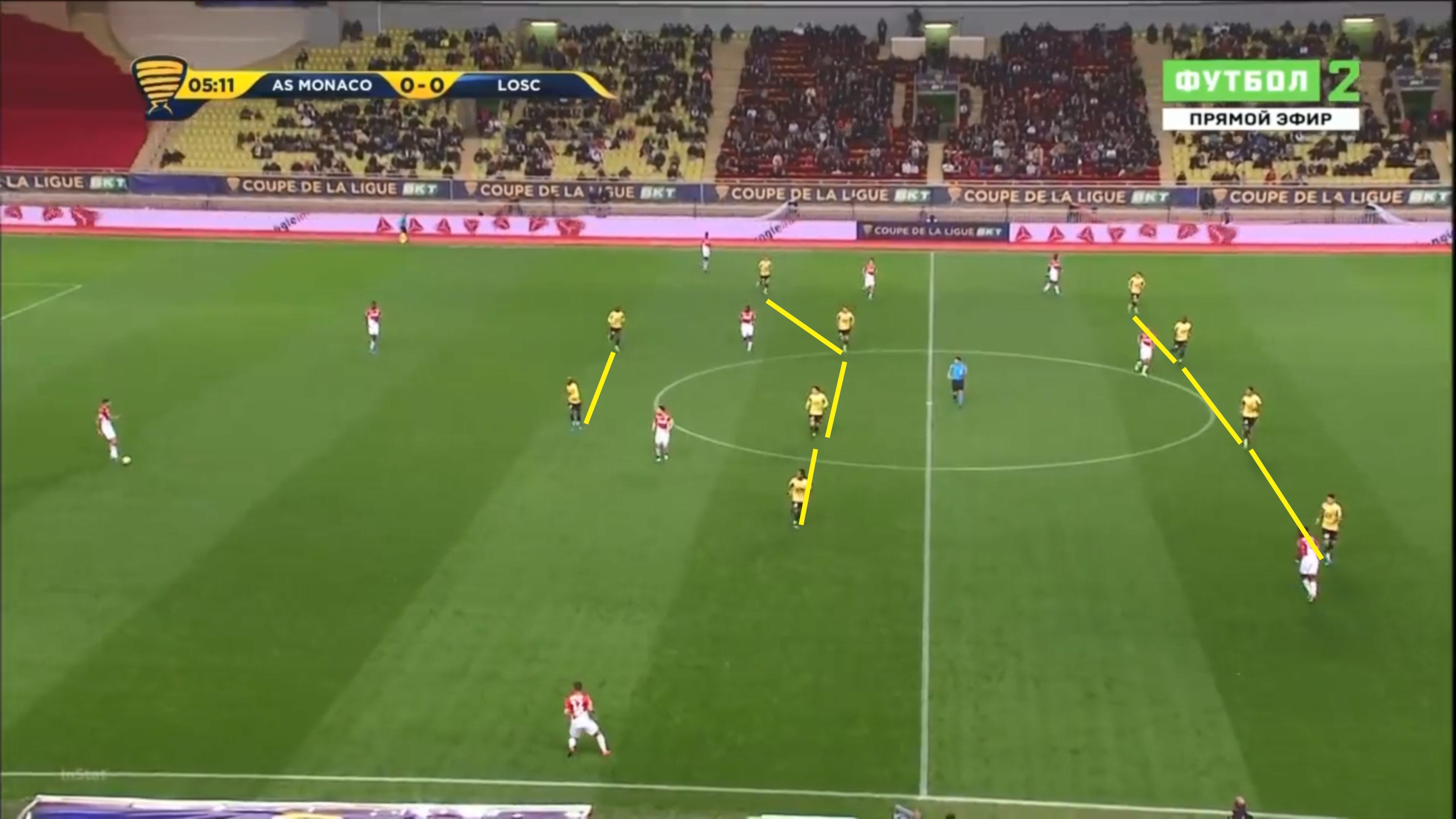 Above you can see that Lille defended mainly with a medium-high 4-4-2 block. A rather narrow and compact block with a defensive line that was quite high. Lille always defended as a unit. They’d push up and press as a unit. And if Monaco managed to get past the first line of pressure, they’d quickly drop deeper, defending with 10 men in their own half while maintaining their narrow and compact shape.

They intended to press Monaco’s ball-carrier, trying to isolate him by also marking the short options as you can see in the picture below. 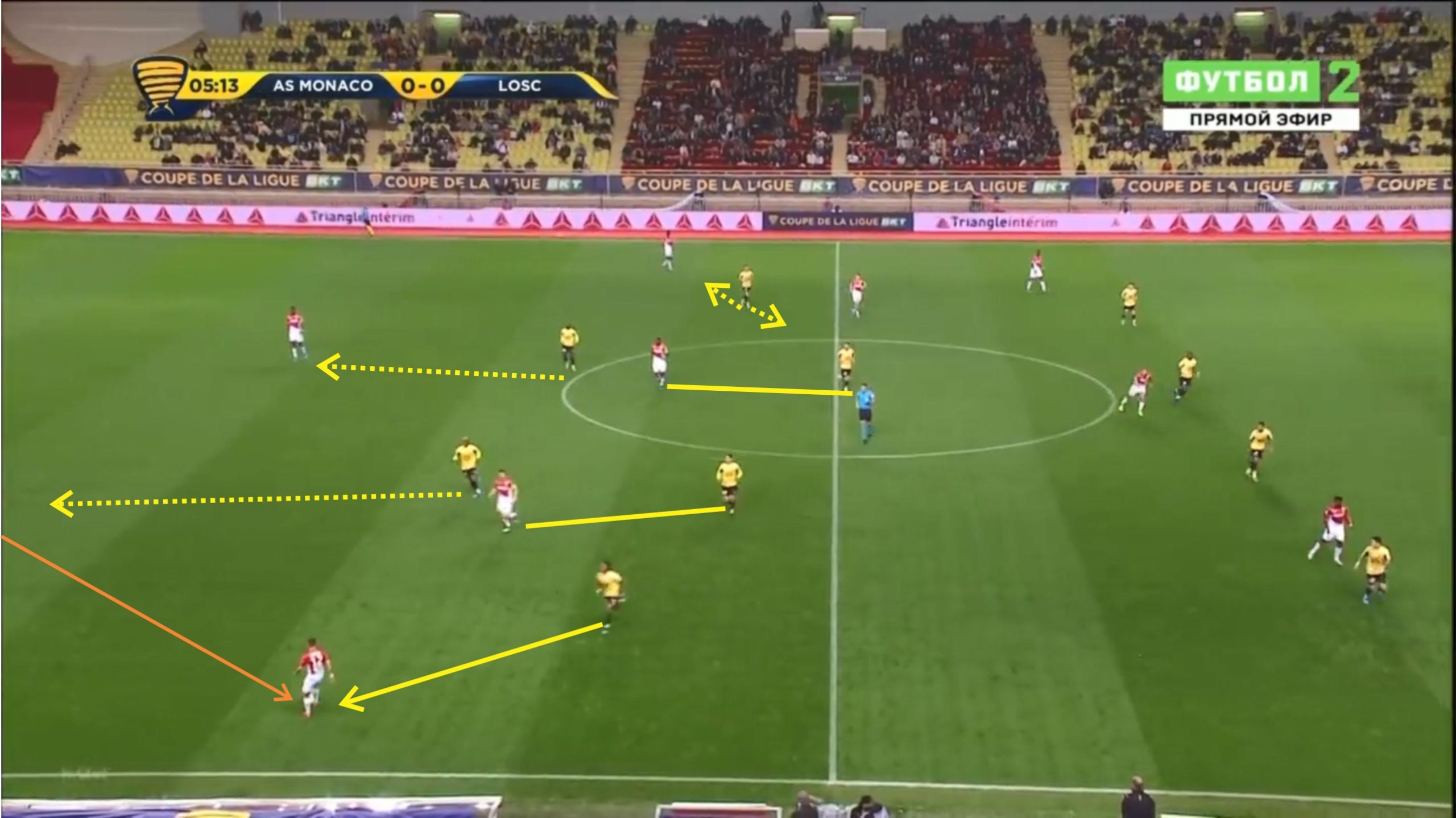 Despite having more players in their own half and trying to switch play more than once in their build-ups, Monaco still struggled to even break through Lille’s first and second line of pressure due to Galtier’s men’s discipline and speed when it comes to moving their block.

While moving their block, Lille would also exert pressure on the ball-carrier while staying narrow and compact as well as marking the closest options. When the ball was moved to either flank, this will result in an overload situation as you can see in the picture above. 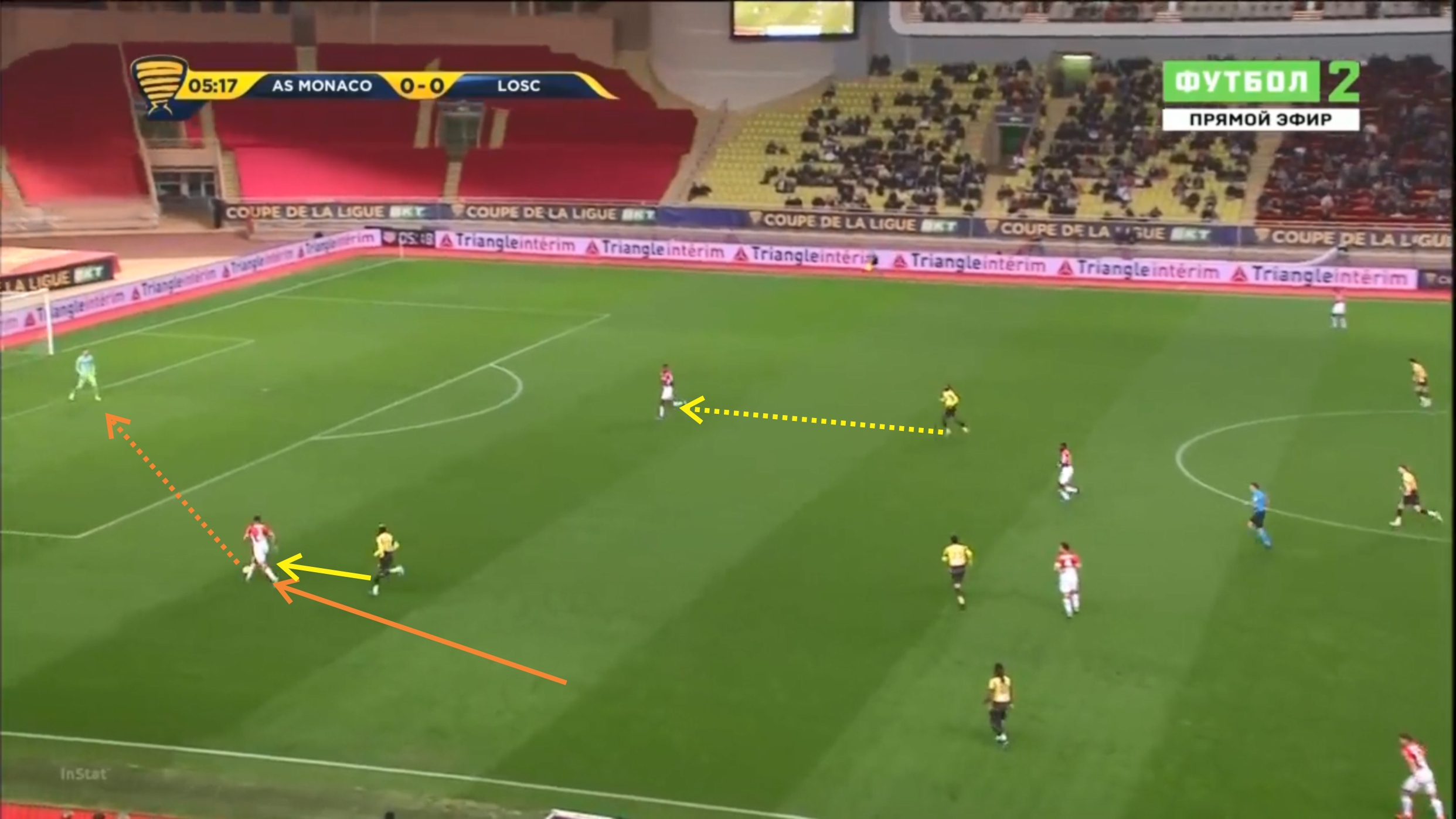 Due to this, Aguilar was forced to play the ball back towards Maripán who’s immediately closed down aggressively by Osimhen. The Chilean centre-back then played the ball back to the goalkeeper again as a lateral pass would be extremely risky. Once the ball was played backwards, Lille would push up as a unit while marking and blocking the passing lane towards the closest options.

This defensive setup by Lille made it very difficult for Monaco to play out from the back comfortably, forcing them to launch long balls forward instead to bypass the midfield. 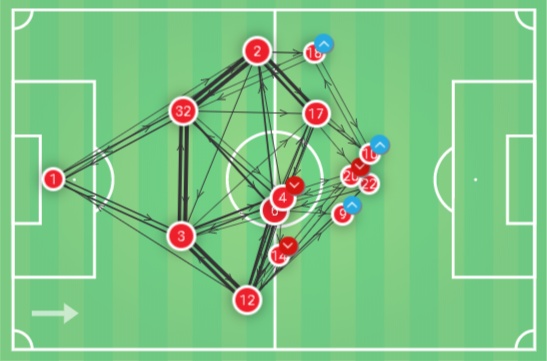 Above you can see that Monaco had to progress through the flanks via either of the two full-backs rather than through the middle. These were due to several things.

Firstly, Lille’s horizontally narrow shape meant that the middle was often crowded and difficult to access, however, there were always rooms on the flanks that they could move the ball to. However, as mentioned before in this tactical analysis, Lille would quickly execute their pressing trap while creating overload and isolating the ball-carrier in that area.

Secondly, Monaco’s lack of fluidity in the centre of the field was also the problem. Lack of movements and positional rotations by Fàbregas, Bakayoko, and Golovin made it extra difficult for the two centre-backs to find them and progress the ball towards their area.

Usually, after receiving the ball from the centre-back, Monaco’s full-back would combine with a ‘6’ or an ‘8’ who’d move closer and sit in the half-space. The pass map above also shows the positional tendency of each Monaco players.

At times, Fàbregas would drop down and sit beside the two centre-backs. This actually proved to be a rather effective way to dismantle Lille’s defensive structure and progress forward from the back. 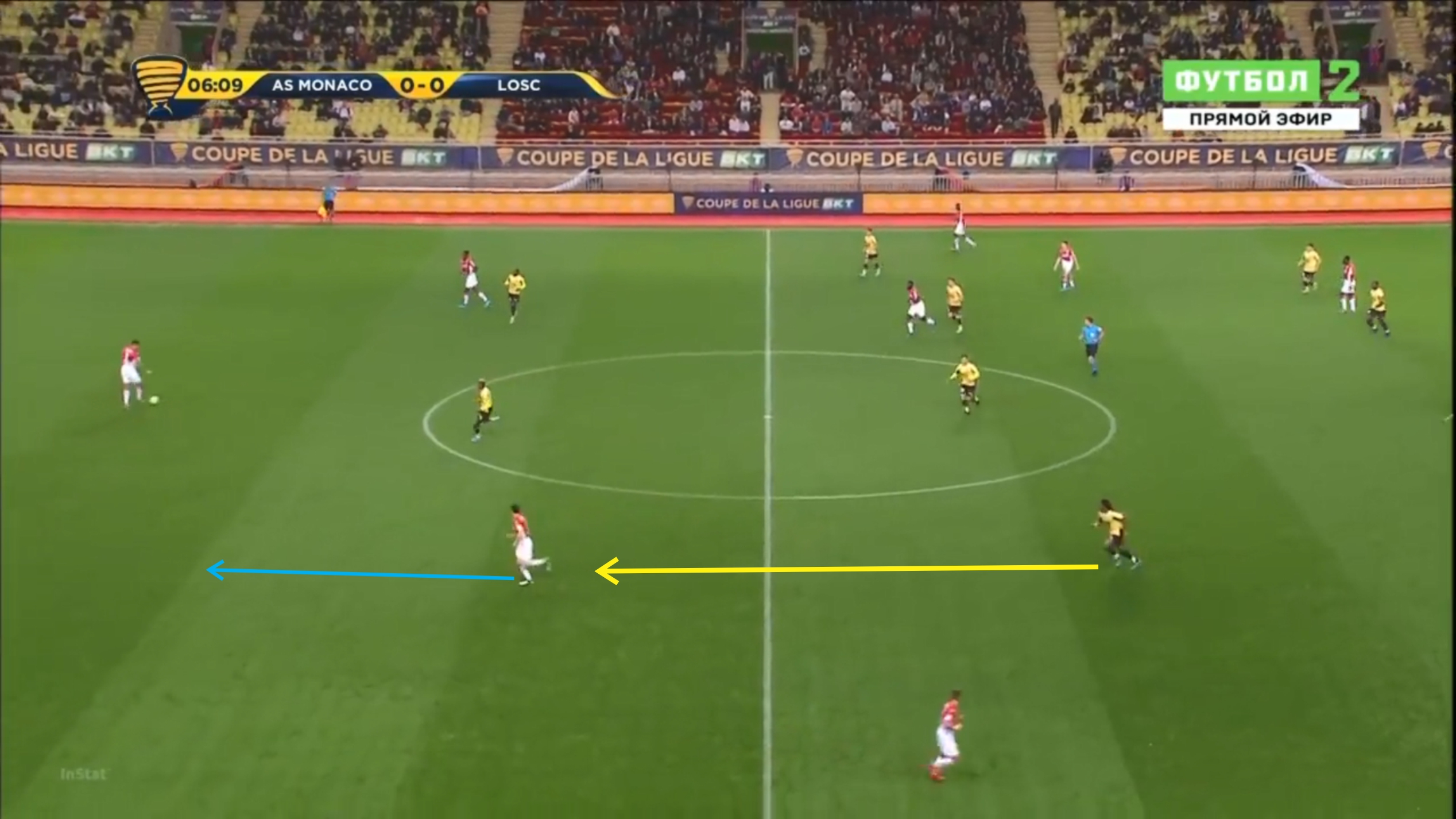 Above, you can see Fàbregas dropping down to sit beside the two Monaco centre-backs, thus making it a 3v2 situation at the back. This prompted Sanches, who spotted the movement, to leave his spot and close down the Spaniard. 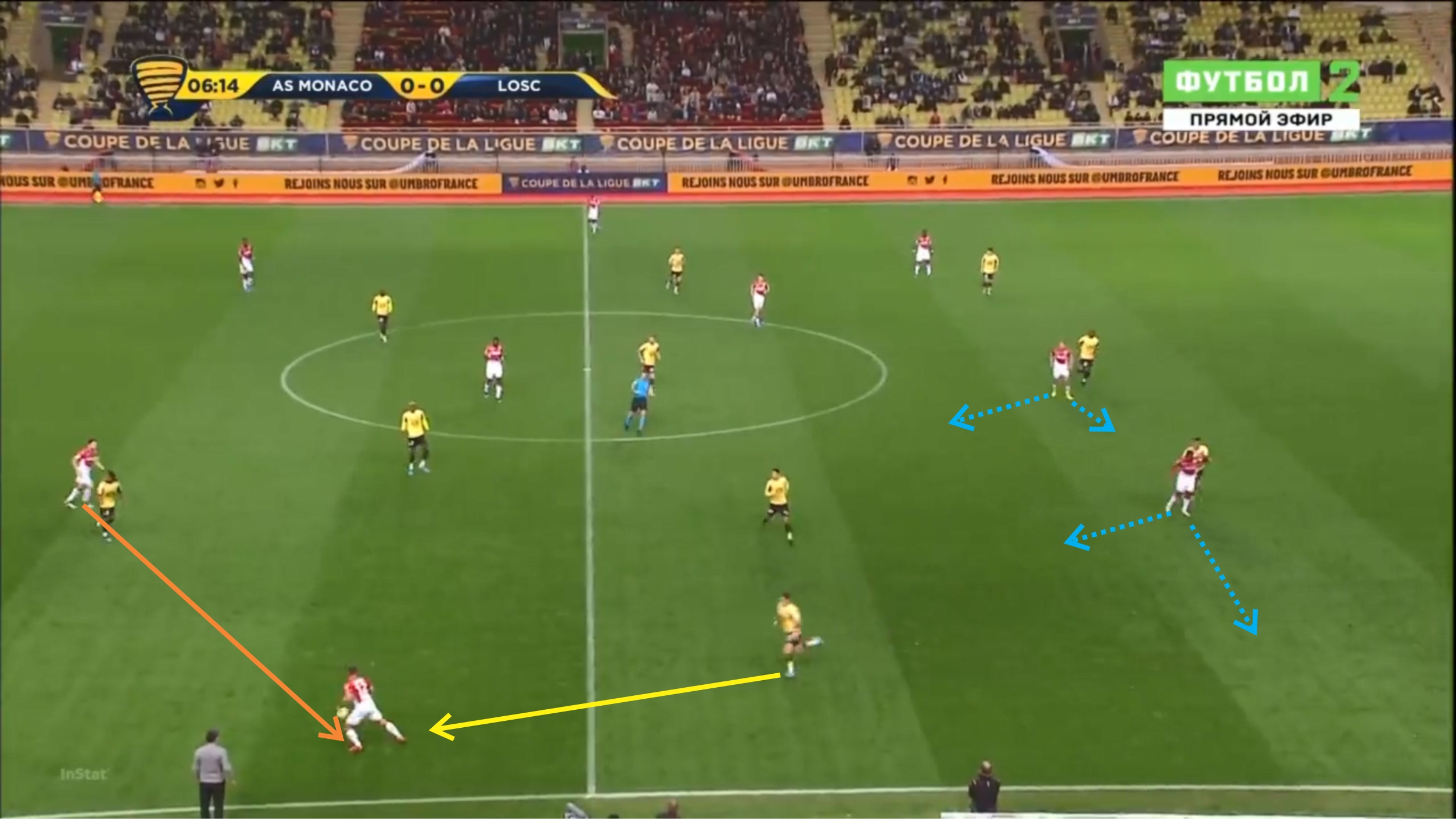 As you can see in above, with Sanches moving out of position to press Fàbregas, Aguilar was afforded left unmarked and afforded a lot of space. Domagoj Bradarić spotted this and immediately close down the ball. This created a 3v3 situation at the back. With Bradarić having to cover some distance when closing down, Aguilar was also ensured that he’d have a lot of time to make his decision and shape up. Slimani and Baldé were the reasonable options in this situation and he could either play the ball through to the back of the Lille defence or play it between the lines. In the end, Slimani did drop down and move into the pocket of space and Aguilar played the ball there.

This build-up play (that was started with Fàbregas dropping down to sit beside the two Monaco centre-backs) happened quite often in the game but inconsistently. This was perhaps not the original plan of the coach, but rather Fàbregas’ initiative himself.

Though Monaco dominated possession (65% against 35%), they didn’t manage to create much from it. Statistically, they managed to create only six goalscoring chances while registering nine shots with only 33% of them being on target. Lille, strangely enough, managed to create 11 goalscoring chances while registering 13 shots with 54% accuracy. This shows a huge gap between both team’s effectiveness in attack and in front of goal.

Monaco struggling to hold off Lille on the break

What was clear in this game was that Monaco seemed to be really struggling to defend against Lille’s pace on the break. The Northern France side were very straightforward and very direct albeit not necessarily always using long passes to progress. But of course, Monaco’s lazy defending was also a huge factor behind Lille being allowed high-quality chances in the final third. 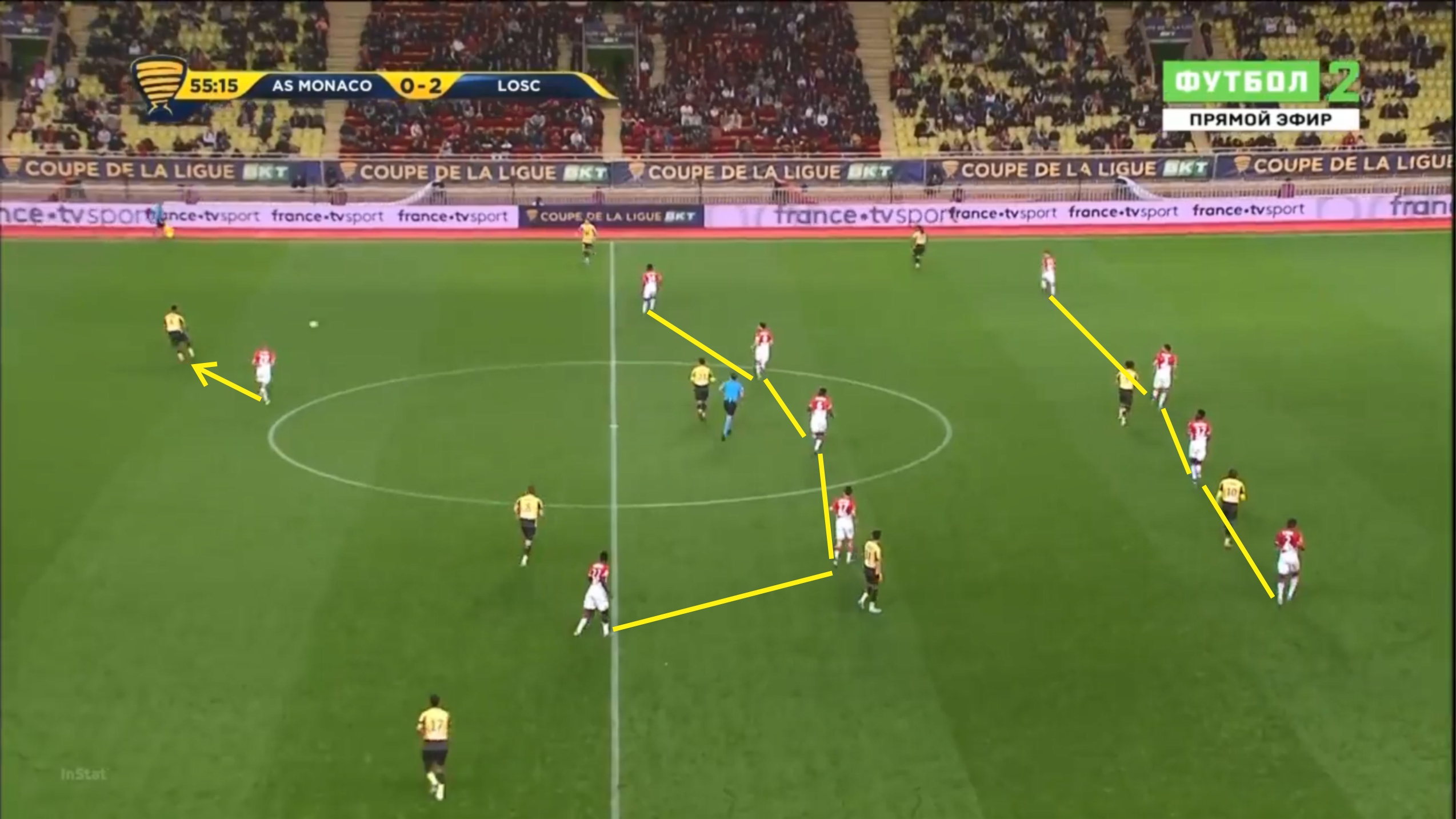 Monaco defended in a flat 4-5-1 shape instead of the usual 4-1-4-1 shape. The wingers and the full-backs could be asymmetrical at times as they were man-oriented, depending on where the ball and where their men were. The lone striker aimed to press the ball too while blocking his lateral option towards the other centre-back, thus guiding him to play wide.

Monaco’s block was fairly wide, but with superior numbers in the middle, Lille were often unable to combine between the lines. 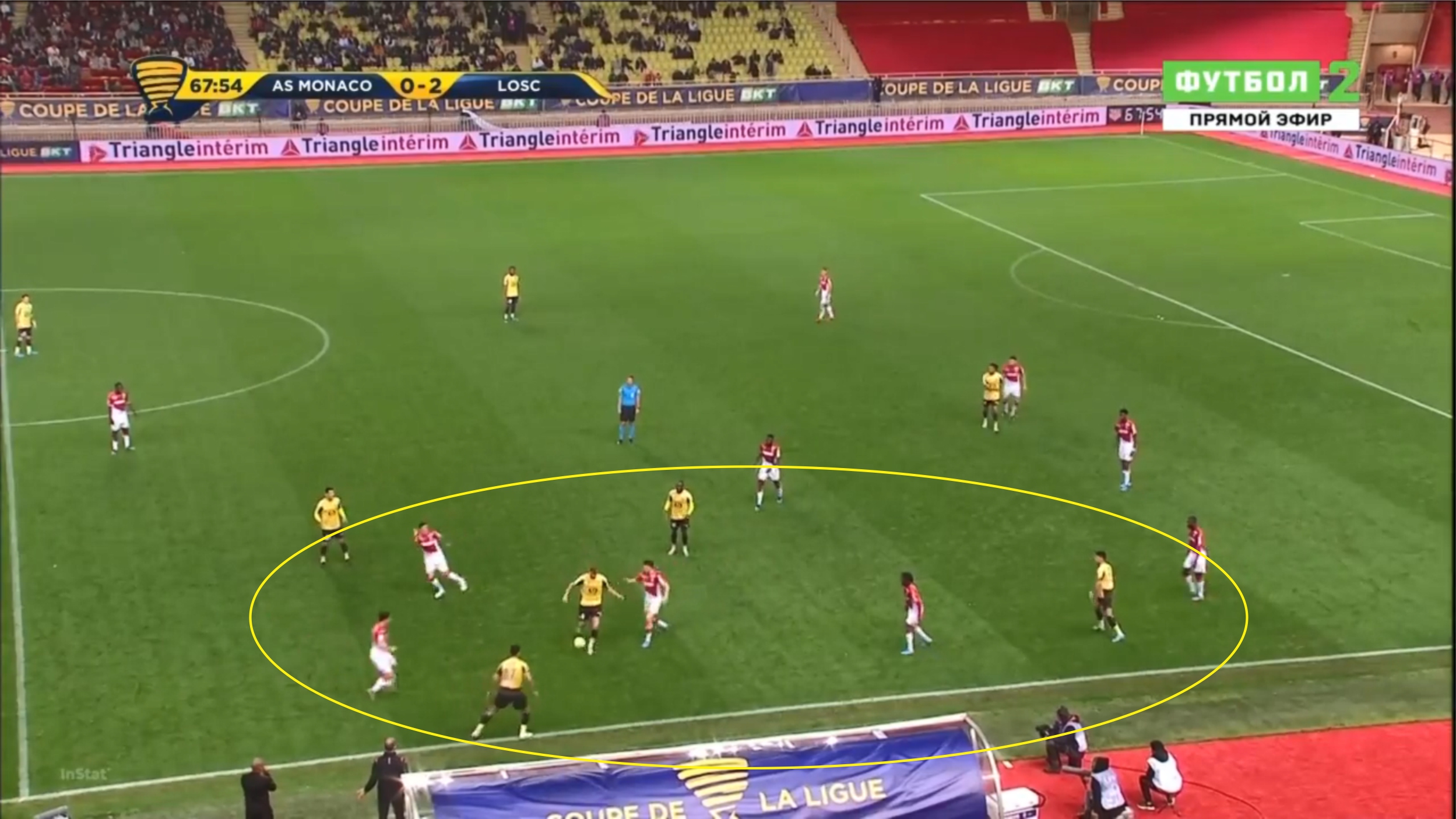 Above you can see that Monaco also aimed to overload one side of the pitch when the ball’s there. This was of course with the same aim of isolating and preventing progression or winning the ball back. However, Lille’s excellent movements, swift exchange, and quick switch of play often could get Monaco’s defensive tactics undone.

As mentioned earlier in this tactical analysis, Lille were very effective and efficient with possession. They needed only very few passes to break through Monaco’s defence and fashion chances. 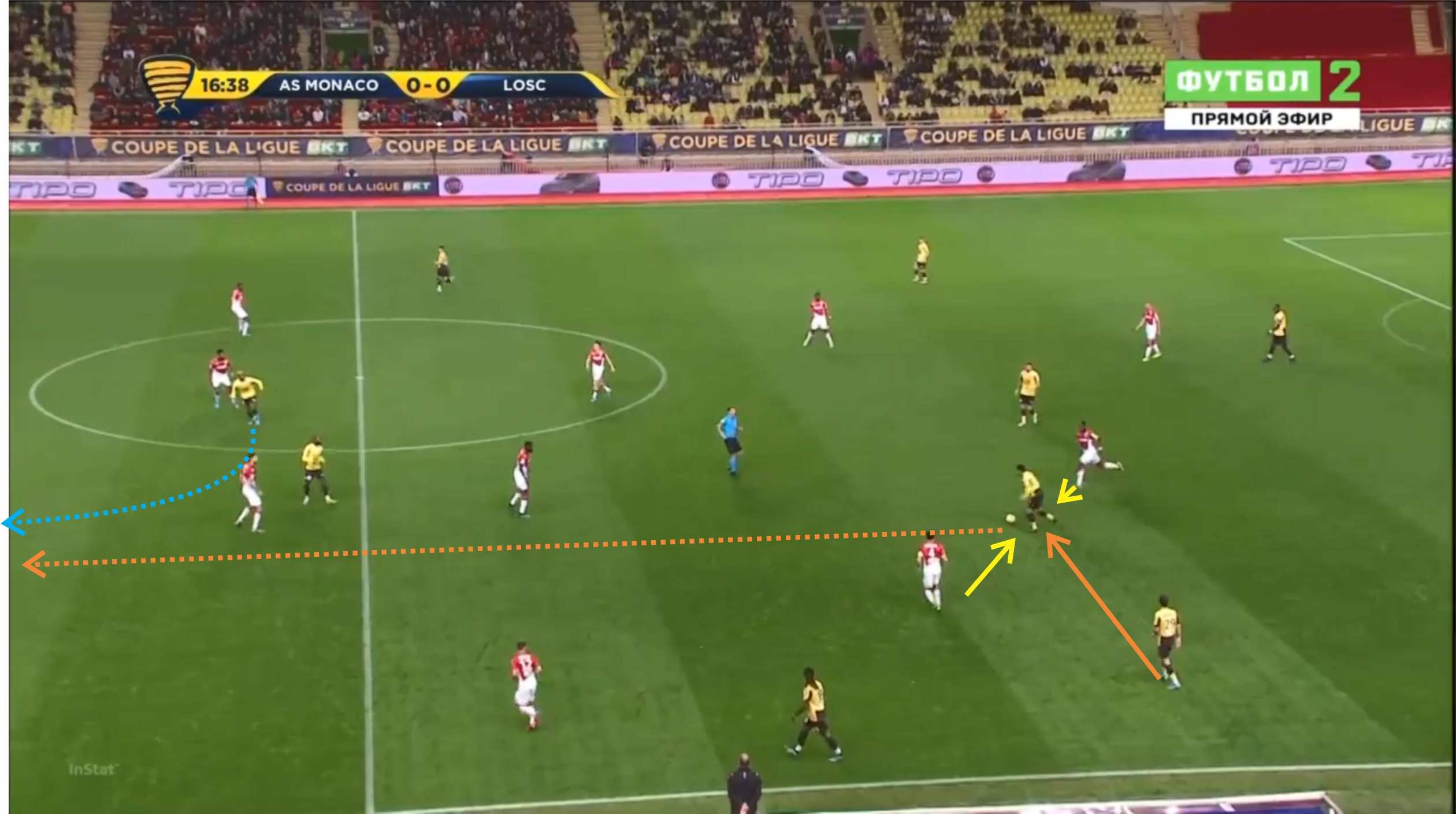 In the situation above, for example, Lille invited a high press from Monaco. After receiving a pass from Bradarić and escaping the first line of pressure, André saw the movements of Osimhen and delivered an exquisite through pass into space in behind the defence. Fàbregas and Baldé seemed to exert very little pressure to the ball-carrier in this case, meanwhile, Bakayoko seemed unsure as to whether or not he should guard the space or close down the ball-carrier. Very poor defending by Monaco.

Osimhen was very intelligent in his movements. Upon seeing that Maripán’s attention was fixated on Ikoné, Osimhen made a curved run and exploited the space behind the Chilean defender. The timing of his run was perfect as he beat the offside trap and was clean through on goal. However, Osimhen didn’t manage to finish the chance despite having only the goalkeeper to beat with no defenders anywhere near him.

This was a perfect example of how Lille exploited Monaco’s high press and high defensive line and utilised blistering pace to break forward quickly and effectively. 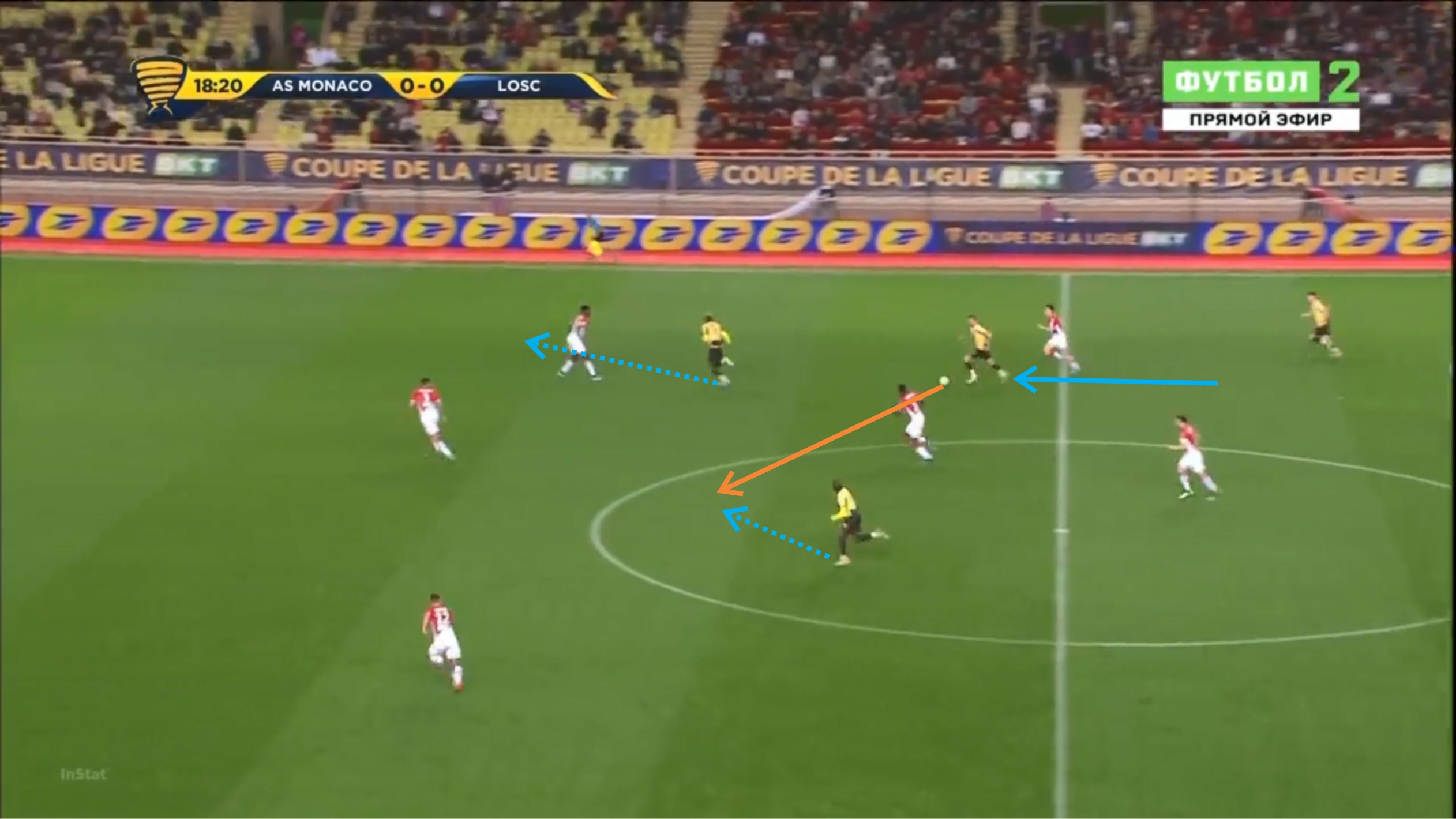 Above is the process of creation of Lille’s first goal in the game.

Xeka won the ball from Golovin in the middle third and drove forward with the ball. It was a 3v2 situation upfront and both Bakayoko and Golovin could have swarmed Xeka and overwhelm, regaining possession yet again and preventing a dangerous counter-attack. That is, of course, were it not for both players being very slow in tracking back and closing down the ball-carrier. Monaco as a team were actually very slow in transitions, especially in defensive transitions and Lille really hit them where it hurt.

Despite Monaco seemingly having all the advantage in this situation due to their superior number, Lille still managed to break forward. 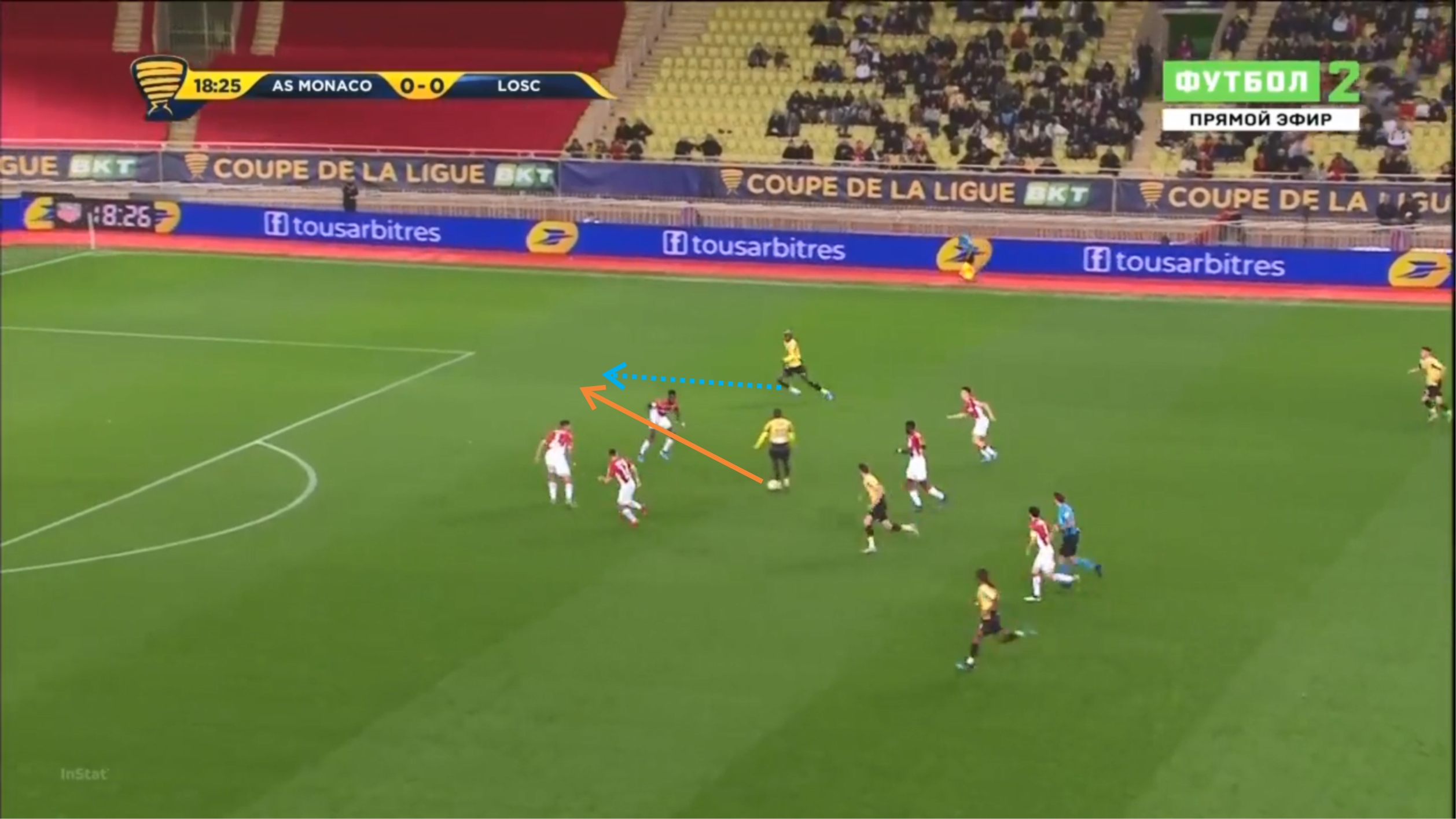 With Golovin and Bakayoko allowing Xeka space and time with the ball, the Portuguese midfielder played the ball into the feet of Ikoné who then released a through pass onto the path of Osimhen who managed to keep himself onside. The clinical striker took a shot from a rather low xG area from the edge of the box but managed to find the bottom left corner. A rather easy goal for Lille.

A similar situation could be observed in the second and third goal with Lille forcing mistakes at the back or around the middle third and breaking forward with pace.

Monaco allowed Lille only 4.6 passes per defensive action. This indicates not only Monaco’s high pressing but Lille’s directness and tendency to be very much vertical-oriented. However, despite Monaco’s high pressing, they could often be easily disorganised by Lille’s brilliant attacking movements.

Monaco were surely made to rue missing their chances. They had most of the possession but couldn’t get the most out of it. Lille, meanwhile, were the exact opposite. They didn’t need to hold the ball for too long but were very straightforward, very direct, and very clinical.

Jardim is now under scrutiny despite a pretty decent run as of late, but this loss has put him under even more pressure. Monaco surely had the quality but performed like a mediocre team.

Meanwhile, for Galtier, he’d definitely hope his side can go far in the competition. If they can show the same (or more) grit and fighting spirit just as they did in this game, there’s little doubt they can do that.