Chelsea hosted Manchester United in what was probably the biggest game of the weekend in the Premier League. A resurgent Chelsea under Thomas Tuchel were pushing for the Champions League places, having conceded just twice since the German took over, with one of those goals an own goal. Manchester United, on the other hand, were rather well-placed in second, but 13 points behind neighbours Manchester City in the title race. Having been top of the tree for a few weeks in January, fans would have expected United to put up more of a fight but with points dropped against the likes of Sheffield United and West Brom, the Red Devils had to start winning games in order to mount a late charge for the title. In this tactical analysis, we will look at the tactics of Chelsea and Manchester United from their game at Stamford Bridge. 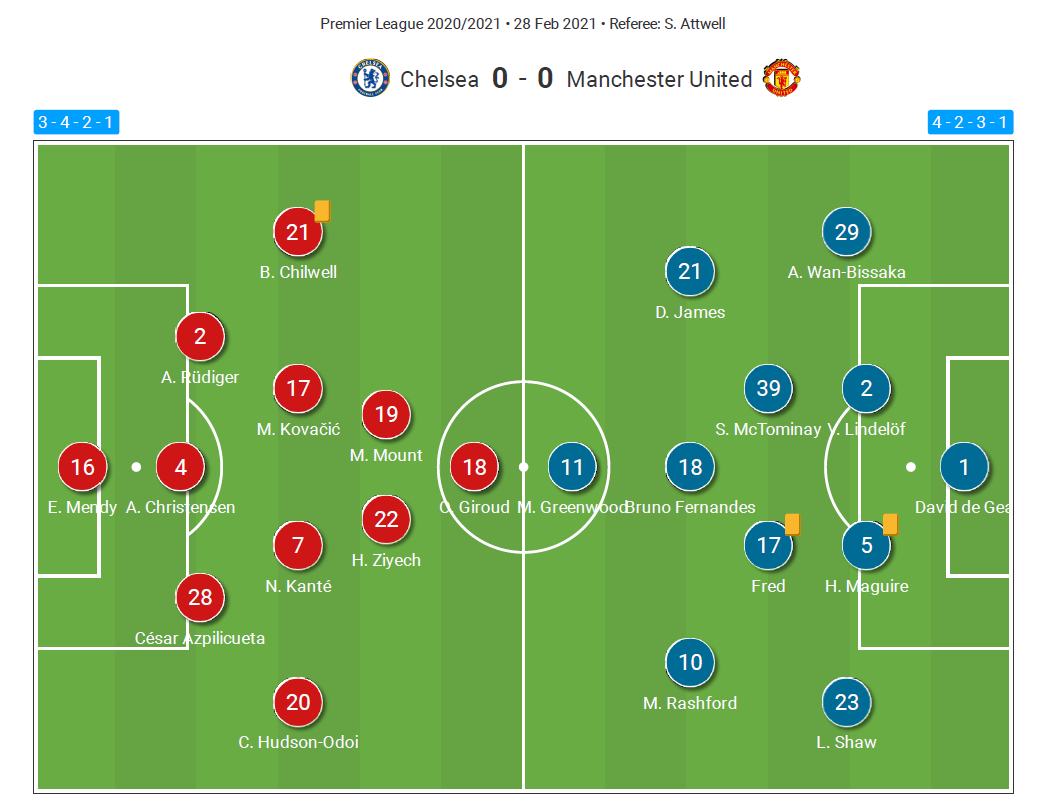 We begin our analysis with a look at the lineups of both sides. The big news for the hosts was that Timo Werner missed out, with Tuchel opting for Olivier Giroud to lead the line. Hakim Ziyech started as well, with the impressive Mason Mount playing down the left of the front three of sorts. Callum Hudson-Odoi started in his new wing-back role, with Ben Chilwell starting down the other flank, over Marcos Alonso who had started a string of games prior. Mateo Kovačić partnered N’Golo Kanté in midfield with Kurt Zouma, who started against Southampton, making way for Andreas Christensen in the back three.

For the visitors, Mason Greenwood led the line, with Anthony Martial out of form and Edinson Cavani not having recovered from injury. Dan James started down the right after some impressive performances in the past few weeks while Bruno Fernandes and Marcus Rashford started as usual. Scott McTominay returned to the side to partner Fred in midfield, with Paul Pogba still injured for the Red Devils. The defence was the same as usual, with Victor Lindelöf partnering Harry Maguire although there was speculation that Eric Bailly could start as well. In goal, David de Gea had come under fire for his errors this season, but he still got the nod over Dean Henderson, who started earlier in the week in the Europa League. With the lineups covered, let us move into the tactics. 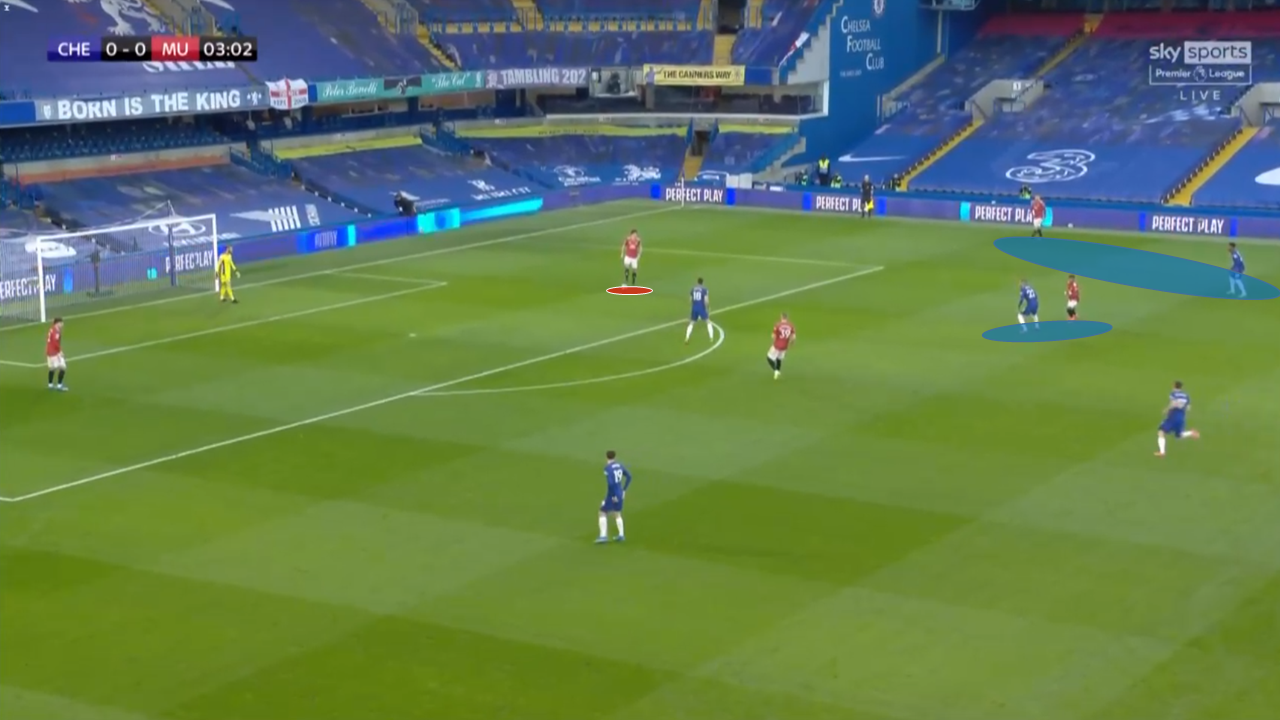 While both sides engaged in a high press, it was that of Chelsea’s that particularly caught the eye. United’s build-up from the back relies overly on the Maguire and Luke Shaw passing combination to play past the opposition and Tuchel set up his press in order to neutralise this. Hudson-Odoi would press Shaw high up the pitch, meaning that Maguire did not have an easy pass to him and should he proceed with the pass, the Chelsea man could immediately try to tackle and win back possession. Ziyech would also cover Fred, to prevent Maguire from playing to his left-sided midfielder and Giroud would cut off the passing lanes to McTominay while pressing Maguire as well. 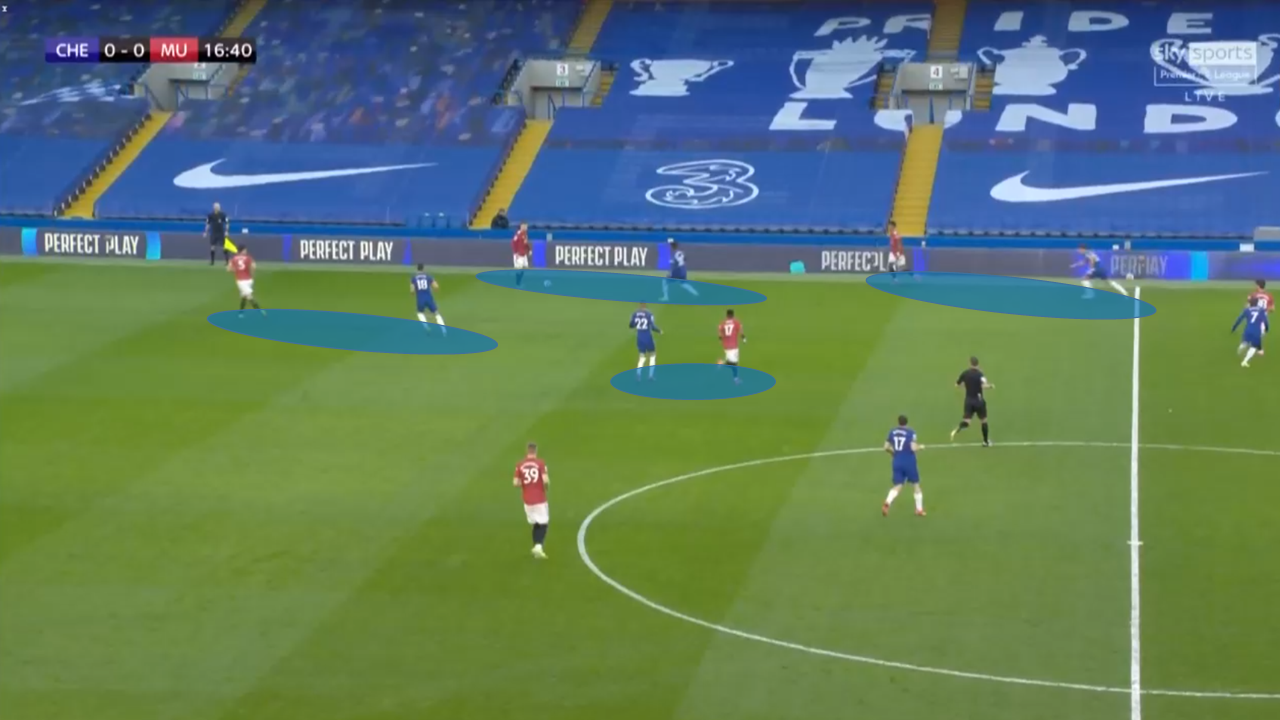 Should United still try to utilise their left-wing, however, Chelsea still had it covered. Giroud would follow Maguire and so would Ziyech with Fred, leaving Hudson-Odoi to engage Shaw. If Rashford looked to drop in to help his left-back, one of the defenders would move up and press him as well, meaning that United were not able to progress the ball down the left-side as they usually do in their games. This led the United players to move over to the right-flank with Aaron Wan-Bisakka and James. Once the ball was moved to the right, Mount would extensively press the full-back knowing that he is not great on the ball. Wan-Bisakka is not known for his dribbling and would often look to release the ball to either James or move the ball back to his keeper. Giroud would also block the pass back to Lindelöf and one of the central-midfielders would move up to handle McTominay as well. Should a forward drop back to help, the Chelsea centre-back could follow, since they were in a back three and could switch to a back four when one centre-back pushes up.

Due to this, United struggled to build-up in their usual manner and the lack of quality down their right-wing meant that they were not as threatening building up from that side. They eventually did look to end up down the left-wing though, but this long process to reach their preferred position in the opposition half allowed Chelsea to remain on top defensively.

Chelsea’s use of width 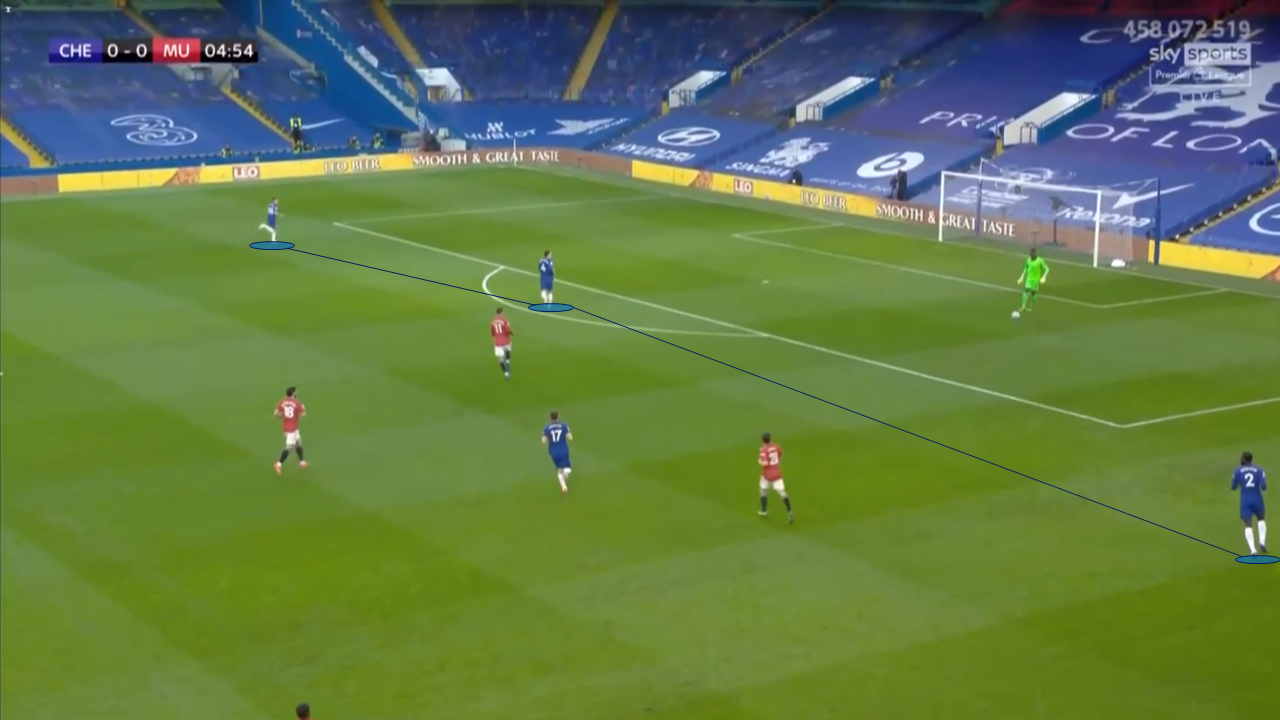 An interesting feature of the game was Chelsea’s use of width, both in attack and defence. Playing in a back three, the centre-backs would be spaced far apart from each other, with the left and right centre back nearly occupying full-back spots at times. The central midfielders would then drop in to aid the central defender as the Blues looked to make full use of the width in order to render United’s press ineffective. The United forwards had to cover large amounts of spaces in order to press their defenders and were often left having to passively press the opposition so as to not be moved out of positioning by committing to a more active press. This also meant that the full-backs of Shaw and Wan-Bisakka had to play much higher so as to prevent the United forwards from being stretched apart for Chelsea to play through them. 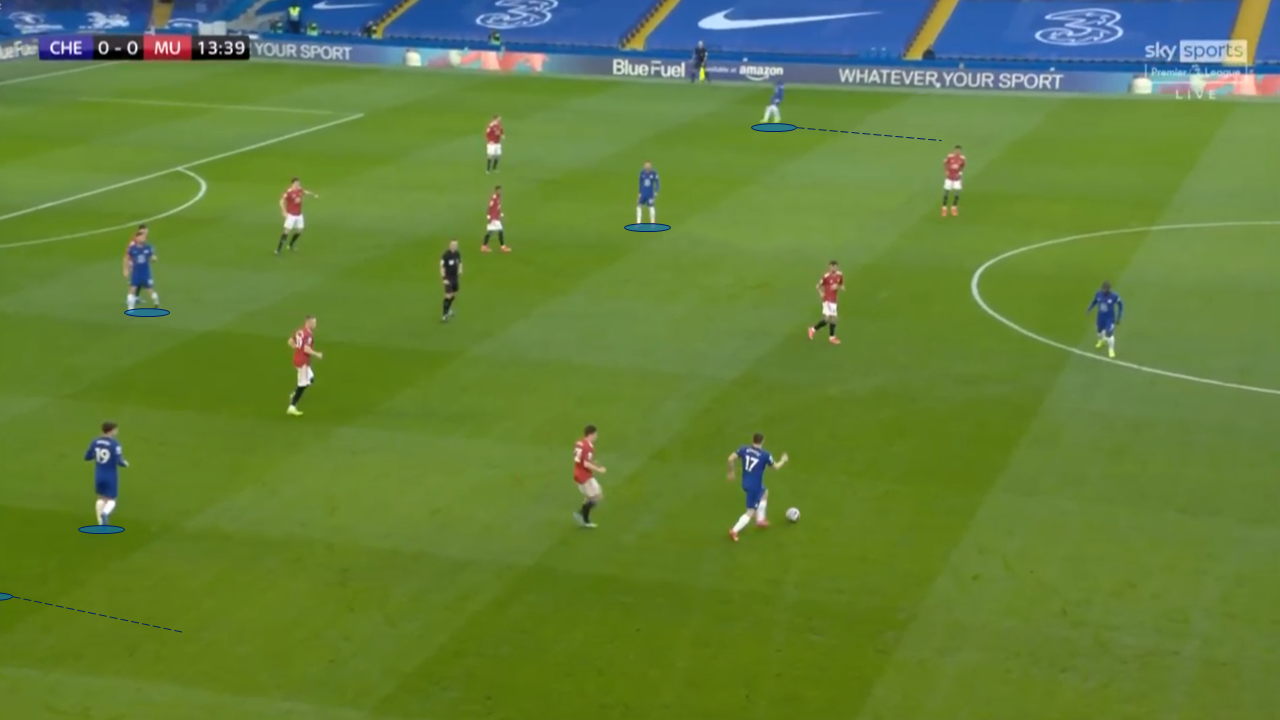 The stretch was evident in the attacking phase as well, with Tuchel nearly mimicking Manchester City’s 2-3-5 formation in attack. Here, Chelsea set up in a 3-2-5 formation, with Chilwell and Hudson-Odoi taking up spaces near the touchline in advanced positions. Mount and Ziyech would tuck into the half-spaces as Chelsea looked to play the ball through the wings before crossing to the centre to find Giroud. However, the lack of a central presence or threat meant that Chelsea’s football was predictable in that the United defenders knew to expect crosses from the flanks. The central-midfielders could drop into the backline to help deal with such crosses and they would not have to worry much about an opponent advancing through the centre and catching them out of position.

Although Chelsea did appear to pierce through the United defence with these tactics a few times, the Red Devils were able to recover in time to prevent the home side from taking the lead. Smart saves from de Gea and crucial blocks and clearances from Shaw and Lindelöf meant that Tuchel’s side were unable to score despite their impressive tactics. 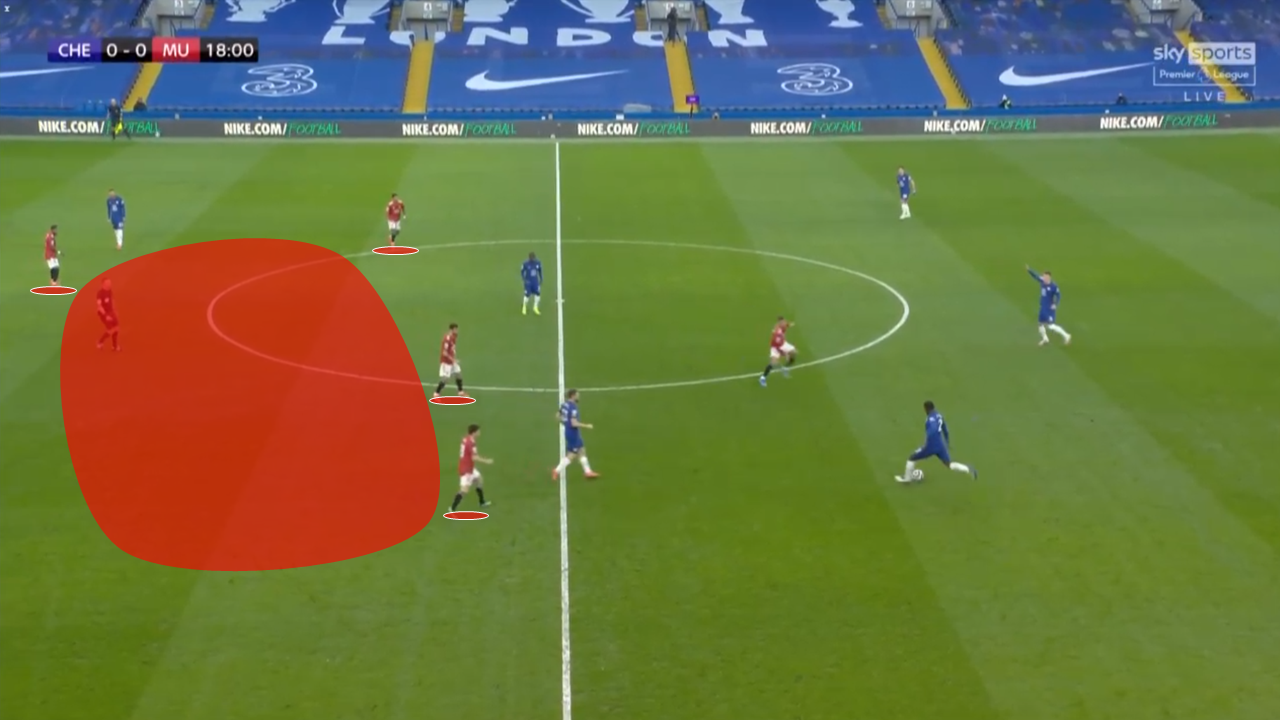 As we saw earlier, with Chelsea’s use of width in attack and defence, the United front four would have to move well ahead and leave large spaces between them and their central-midfielders. The United full-backs had to play further up to help the press and as a result, the central-midfielders had to stay behind to help their defenders. This meant that large spaces would open up in the centre of the pitch. 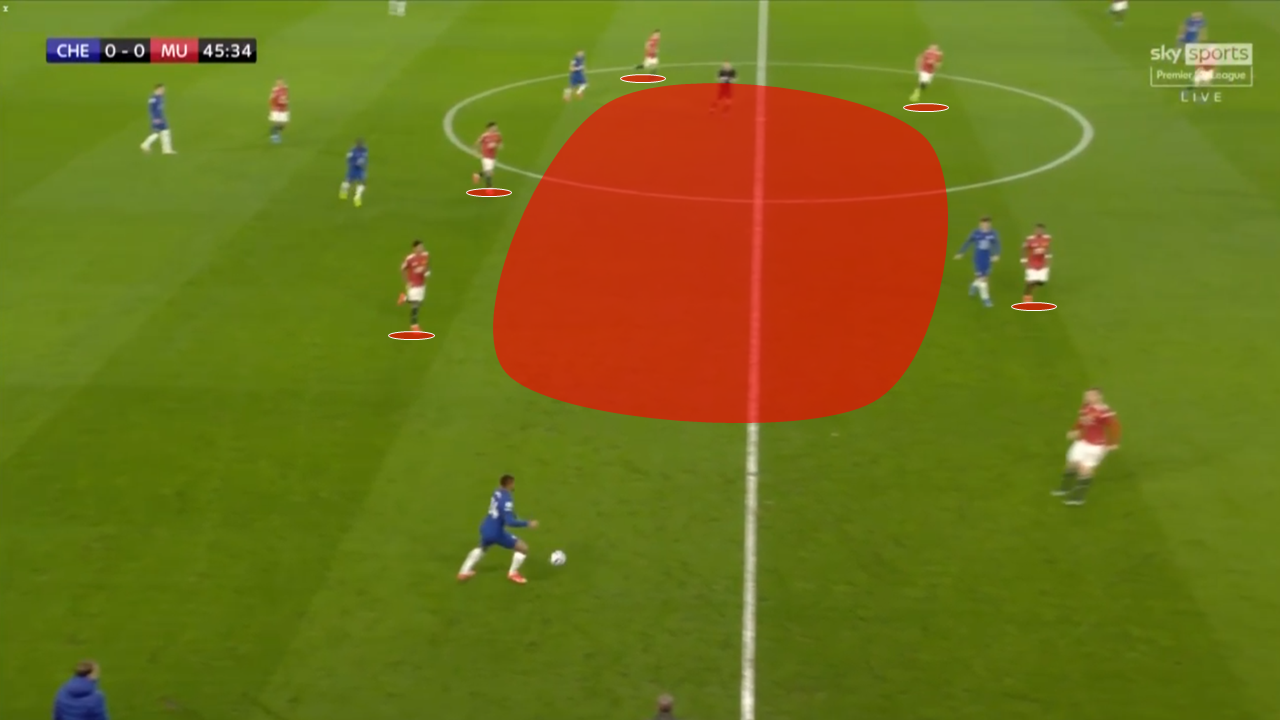 Another example is seen in the image above, with Reece James on the ball, ahead of the United forward line but not having anyone in space in the centre to pass to. While this could have been something for Chelsea to exploit, their central-midfielders would not progress much through the centre and would instead move to the wings to help their full-backs rotate the ball in those areas. The likes of Mount and Ziyech would also remain in the half-spaces rather than move central and despite having stretched United vertically, Chelsea declined the invitation to play through these central spaces. 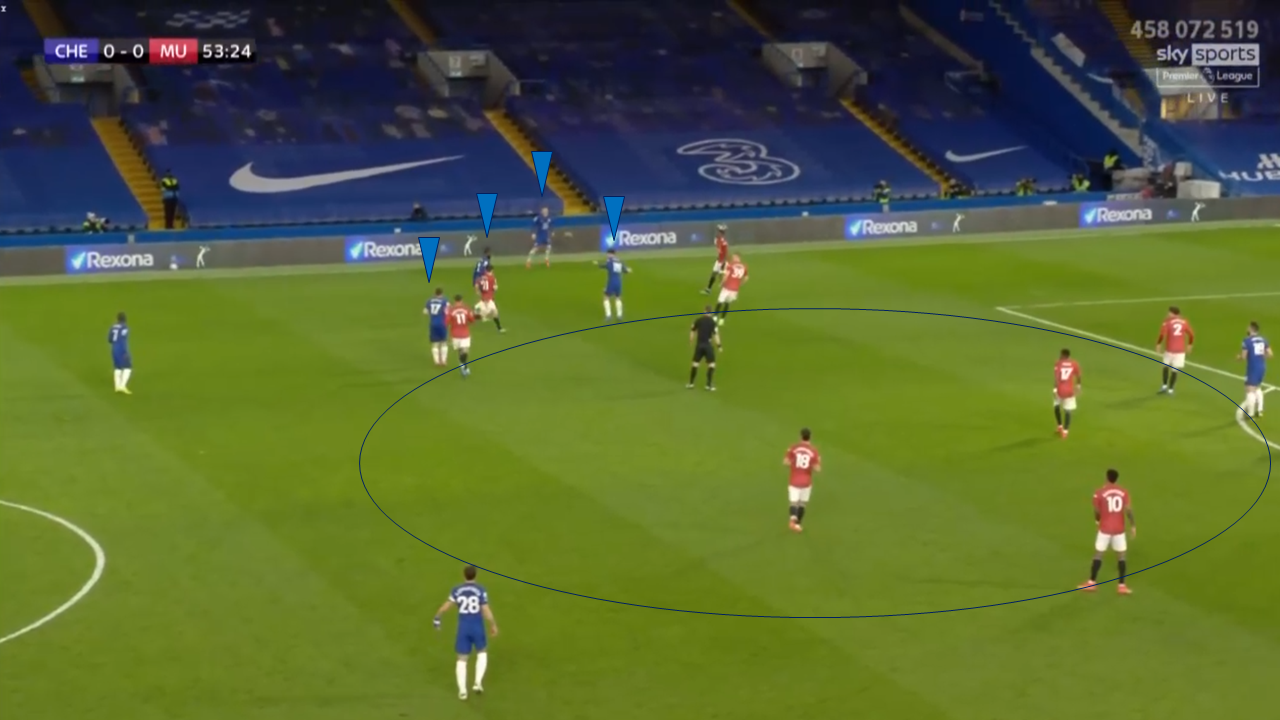 We see this even clearer in the image above, with Chelsea overloading the wings and leaving advanced positions in the centre virtually empty. Giroud was often isolated in the centre with Chelsea only looking to attack down the wings and United were able to commit men down the wing as they did not have to worry about an opponent finding space down the middle. This meant that Chelsea’s tactic of crossing into the box was not as effective either, as United were able to commit men to both stopping the cross as well and meeting the cross in the box. Had the Blues made use of a player dropping into the central areas, they could have created more space for the wingers and full-backs or alternatively been able to make use of the ample space that they might have found themselves in. 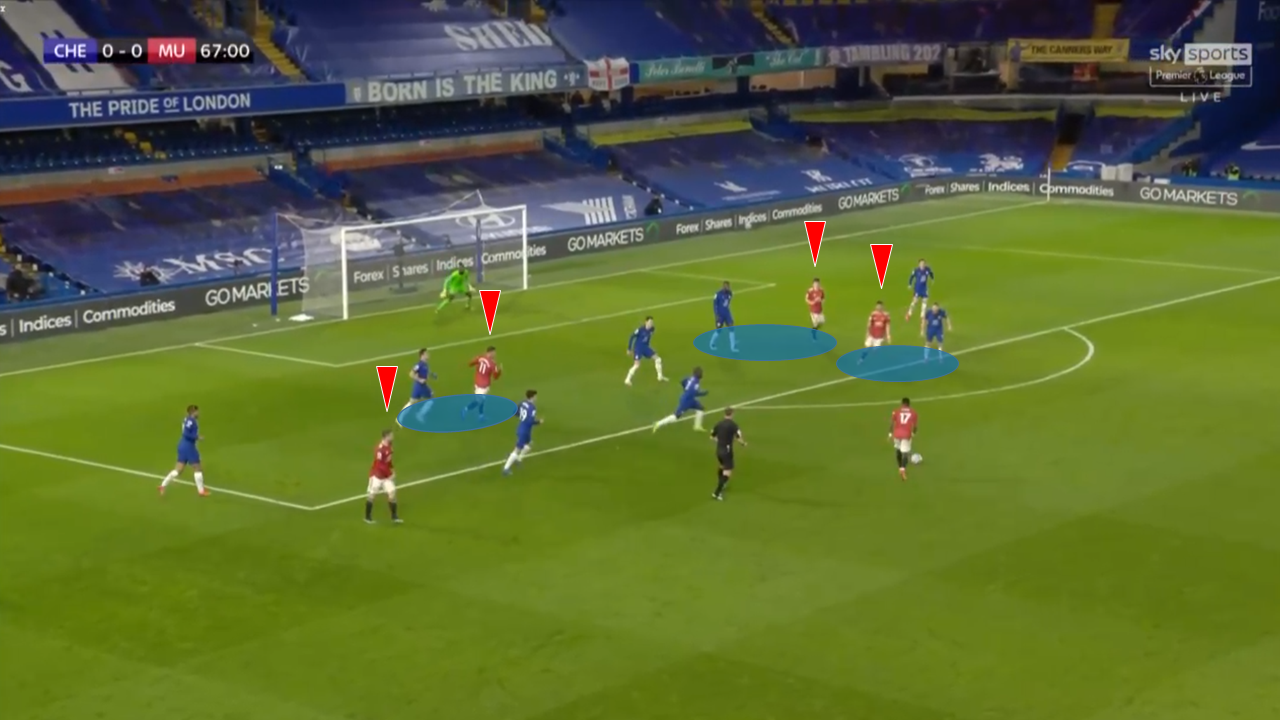 When it came to United though, they were unable to create any valuable chance. Chelsea’s central-midfielders not advancing meant that they could easily get back and aid the defence and form a solid structure at the back, preventing United from exploiting any space between the lines. It also allowed the defenders time to get into position and to be within touching distance of their attacker, so that they could always close them down with ease. Crosses into the box were not viable for United with the Chelsea players crowding it and even if they looked to play quick passing combinations to play themselves in, they were often blocked off and closed down. Shots from outside the box were perhaps their most dangerous option, with Fred having a couple of tries but with the Brazilian not known for his shooting, it was not very dangerous though he did come close in the image above.

All in all, neither side were able to break the opposition down with their tactics and with both of them creating opportunities over clear cut chances, the game eventually ended in a stalemate.

Chelsea missed their chance to move into the top four, still a point behind West Ham. While their defence has been excellent since Tuchel took over, they are yet to find the goal-scoring form that could see them storm their way into the Champions League places. Their next few fixtures aren’t easy either, with Liverpool and Everton up next with both those sides fighting for Champions League football as well.

As for United, the point means that they are now 12 points behind City with 12 games to go and have a monumental task if they are to fight for the title. A trip to the Etihad after a midweek game against Crystal Palace could see them close the gap but with the form that their neighbours are in, it would definitely take more than just a victory there to catch them. More pressingly, United would look to stay ahead of Leicester who are just a point behind them as they look to remain second at least and secure Champions League football for next season.