Sarriball: No more attacking dynamism at the Bridge

Chelsea put in another embarrassing 90-minute display as the season edges into its business end. It’s becoming increasingly obvious now that Sarriball is failing at Stamford Bridge. Again, the Italian’s system continued to show a lack of attacking dynamism needed to break the opponent lines. The tactical analysis below explains how Chelsea were nosed out by United’s press and fast counter-attacking style, and why the Blues were incapable of threatening Solskjaer’s men in any way.

Chelsea played in a 4-3-3 with Higuain leading the front line as the number nine. Manchester United, on the other hand, played with a vertically enriched 4-3-1-2 formation which allowed them to close the potential gap between their lines out of possession. 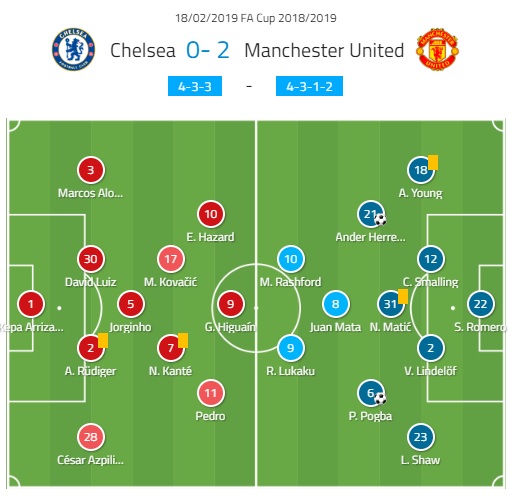 United pressed on the front foot

Manchester United played with a high, intense press over Chelsea. The away team deployed a 4-3-1-2 formation with Mata positioned behind the front line. His job was to cover Jorginho during the defensive phases.

The high and aggressive press by Solskjaer’s men didn’t let Chelsea play their passing game and compose attacking patterns. This resulted in them pushing their game towards the own half. As Chelsea reached the final third, United players would reduce the gap between their lines.

Unlike their Champions League fixture against Paris Saint-Germain, when United defended with a flat shape allowing their opponents to drop into the spaces between the lines, the Red Devils were more careful in maintaining the distance between their lines against Chelsea. This reduced gap restricted Sarri’s men from creating any significant chance out of their narrow passing patterns when they got into the final third.

To tackle the strong press by United, Chelsea narrowed down their build-up passing play in the central regions. This did work in narrowing United’s press too, which in turn left the flanks open. The Blues were in a good position tactically to exploit the open flanks with their advancing left-back, Alonso. In multiple instances, the home team were able to exploit the flanks through the Spaniard, as shown in the pictures below.

However, this attacking scheme could not grant anything to Sarri’s men in the final third of the pitch. Even though they were tactically capable of making significant threatening attacks, the Blues were technically lacking. Alonso himself couldn’t initiate or compose any counter pressing link-up patterns with his adjacent teammates.

Chelsea also lacked attacking coordination as a whole. In one instance, when Willian was about to initiate a pass to the final third, Chelsea had no one to break United’s defensive lines past the region until Kante did the job. Even when the Frenchman had burst into a  good position, Willian passed back to his defence instead of passing to Kante.

Actually, Sarri’s men were already not used to penetrating between the lines so quickly and thus passed back when confronted by United’s press. They had no player with a defined role to break between the lines. As a result, such a lack of coordination was obvious.

In many other instances, Hazard was found with amazing chances to play threatening passes or assists to his teammates but he often wasted his time unnecessarily holding up play. In the next image, we can see that Hazard has a good chance to play a long ball to either Higuain or Willian while those two break the line quickly.

Instead, the Belgian held up play for a while which gave time for the opposition defenders to chase Chelsea’s forwards back to the penalty area. This lacking of tactical flexibility is one of the main reasons behind Chelsea’s fall this season, and especially in this second half.

Chelsea’s lack of attacking coordination wasn’t only prominent among their playmakers but also the recently-joined Higuain, did not display any decent link-up play with Hazard or the midfield how Morata used to do. Due to this, Chelsea’s play up front clearly seemed to miss a link-up element.

Chelsea clearly lacked the tactical dynamism to create attacks before the United defence could fall back. Since the Red Devils loaded up their backline and reduced the gap between the defensive lines as soon as Chelsea reached to the final third, the home team needed to be quicker and more agile while creating or concluding their attacks.

Chelsea didn’t just lack tactical flexibility to create, conclude, or convert attacks, but they also needed a concrete defensive command to direct the defence during defensive phases and especially transitional phases. Chelsea, as always, showed a clear lack of defensive direction and were too distanced to play like a defensive unit.

The Blues conceded the first goal due to their misplanned pressing scheme on the flank. As United penetrated down the flank, almost all the Chelsea players occupied the region to press along the width which conceded spaces in midfield. United were now left with the whole midfield open to attack.

Even when United kept on penetrating Chelsea’s defensive third, the home team still limited their press to the flank keeping the central region open for the away team. This gave Herrera a perfect chance to push up and score from Pogba’s swirling cross. In this case, Chelsea’s backline seemed to be totally ignorant of the opposition midfielder and were without any solid command or defined roles to put together a defensive shape.

The second goal was conceded by Chelsea when Young sent a long throw-in to his teammate who flicked it on. Luiz then cleared the ball poorly letting it fall again to Pogba. As Chelsea’s backline was already far from the defensive zone, United’s pace was enough to break them.

Forget Sarriball, it often seems like the Blues are not even playing plain football. With no longstanding line of attack and a weak forward thrust, Sarri’s inflexible style is not being absorbed well at Stamford Bridge and is becoming impotent over time. Be it bringing flexibility in his tactical approach by testing players with varying yet clearly communicated positions and roles or adopting a comprehensible recruitment policy instead of getting new players on a pick-and-mix basis, Sarri – or whoever going to take over – should take action to bring dynamism to Chelsea’s attack.