On the face of it, a match-up between two of the league’s entertainers should showcase a some good football. Both Borussia Dortmund and VfL Stuttgart from a tactical and technical aspect, have caught the eyes of many within Germany and around the world.

At the start of the season, the Bundesliga manager merry-go-round began, leaving Dortmund with ex-Borussia Mönchengladbach manager, Marco Rose, in their possession. Their newly appointed manager has been a success story in the Ruhr region, having essentially secured second place and another stab at the UEFA Champions League. With this being said, Rose has faced a few setbacks which stick out – most notably Dortmund’s 4-1 to RB Leipzig at home, and a disappointing two legs against Rangers in the Europa League. Their Friday night opponents Stuttgart are feeling the pressures of the German top-flight, as they currently sit just above the relegation places, simply staying afloat until the season is over and safety is guaranteed. Regardless of league positions for both sides, both teams offer genuine quality within all departments of their respective teams. Whether, in defence with Konstantinos Mavropanos and Matt Hummels, or Wataru Endo and Jude Bellingham, the matchups on the field will create an intriguing spectacle.

This tactical analysis will delve into the strengths and weaknesses of Stuttgart’s game, in addition to Marco Rose’s tactical game plan.

The home side made use of a 4-3-3 formation on Friday night. Florian Müller started in goal, with his back four consisting of Pascal Stenzel, Hiroki Ito, Borna Sosa and Arsenal loanee Konstantinos Mavropanos. The midfield three comprised of Wataru Endo, Atakan Karazor and Orel Mangala, who some say is already Premier League-bound. The attacking front three comprised Omar Marmoush, Tiago Tomás and Chris Führich.

Marco Rose’s side utilised a 4-2-3-1 formation. Gregor Kobel was the starting goalkeeper, with Mats Hummels, Manuel Akanji, Raphaël Guerreiro and former Liverpool midfielder Emre Can in the back of four. In the double-pivot, Mahmoud Dahoud and Jude Bellingham, with Marco Reus, Gio Reyna and Thorgan Hazard as the attacking midfield three. Erling Haaland started as the lone number nine in this match. 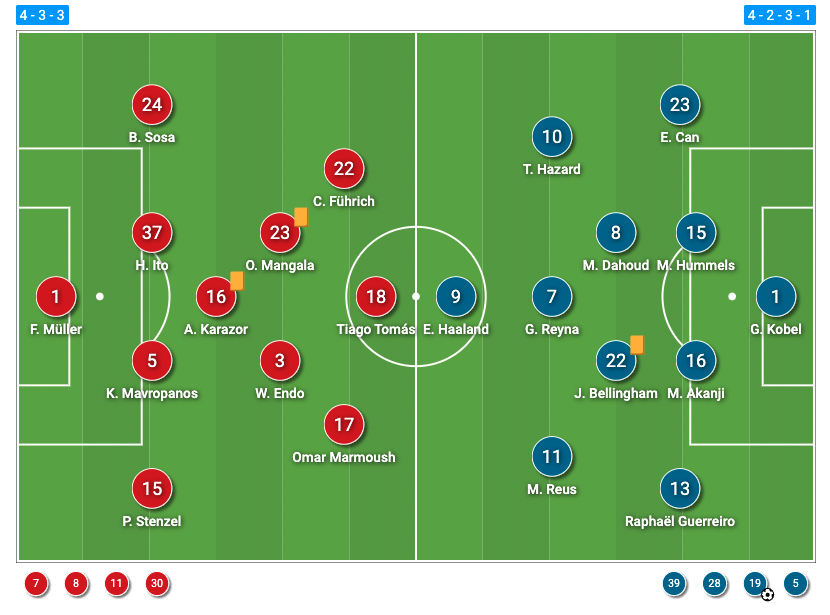 As mentioned previously, Stuttgart and Borussia Dortmund are operating within different echelons of the tables, so a good deal of may consider this game to be a flat-out Wipeout in Dortmund’s favour. This quite logical prediction did not turn out that way, and stats show this finding. Dortmund scored two goals from an xG performance of 1.50, which is quite respectable. Conversely, their opponents generated enough chances, leaving them with an xG of 2.03, but with no actual goals. Not surprisingly, Dortmund controlled the tempo of this fixture and took initiative. Stuttgart was well aware of the threat and structure Dortmund possessed and understood would be their most successful avenue when creating shooting opportunities. Because of Marco Rose’s in-possession tactics, a team shape that will be discussed further, space was afforded to them in the wide areas. With the likes of Chris Führich and Omar Marmoush, two quick and technical wingers, the home side could find some joy. Ain addition, Stuttgart was able to transition so well, because of being able to win the ball back within the middle third of the pitch, compared to their defensive third. The likes of Wataru Endo and Atakan Karazor excelled when quickly winning the ball back and being the catalyst for attacks. While no goals were scored, Pellegrino Matarazzo’s men can be satisfied with their attack contribution. By contrast, their defensive performance did not replicate the same order and execution compared to their ability to counterattack.

During the first 45 minutes, Stuttgart made use of a 4-3-3 when defending against goals kicks. When Dortmund would eventually bypass their opposition’s pressure, Stuttgart’s wingers would drop into the defensive line, and create a 4-5-1 medium block. 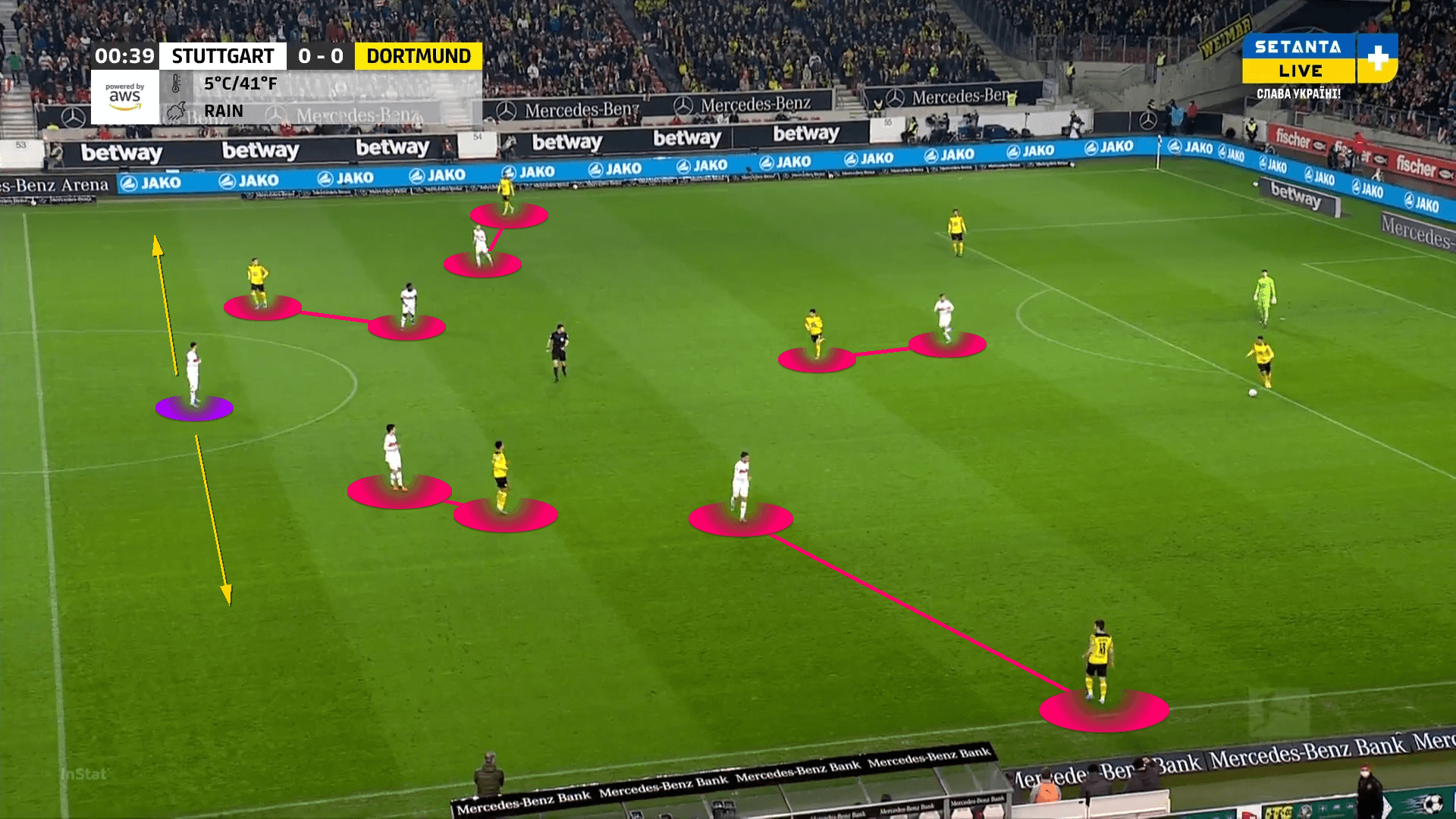 When Dortmund was in the first phase and the ball transitioned slightly wide, Orel Mangala was tasked with pushing slightly higher. While the Stuttgart entered this game with a plan, it was unsuccessful, as Dortmund’s shape had stretched them. Simply, Stuttgart’s defensive shape was passive and ineffective, and a change was needed going into the second half, after already being 2-0 and in need of points. 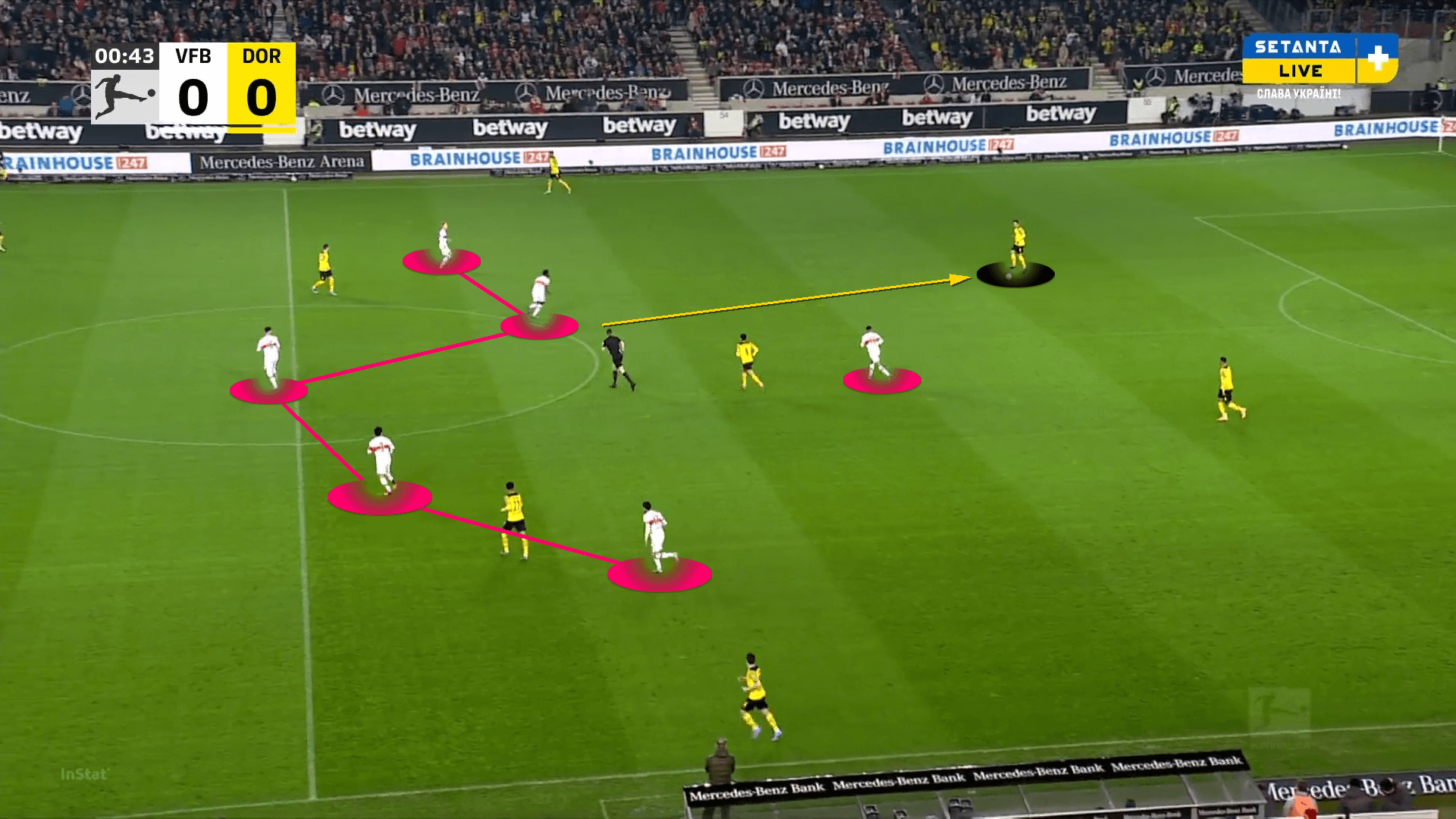 The second half of Stuttgart proved to be better for them, as their defensive structure took a massive upturn. This was because of the added aggressiveness within the game regarding their press. To start with, their line of engagement was a few yards higher, adding much-needed pressure. In addition, Stuttgart’s fullbacks were positioned higher, to cancel out Dortmund working the balls through the wide channels.

Overall, Stuttgart’s first-half performances showcased they are attacking talent that they have within their midst, a how they can be a huge reason for their inclusion into next year’s Bundesliga. On the other hand, the press needs some work, and Pellegrino Matarazzo is most aware of this based on his changes at halftime.

As mentioned prior, Dortmund was the dominant force in this game, especially in the first half. Their superiority can be traced back to Marco Rose’s game-plan. The team sheet expresses Dortmund’s use of a 4-2-3-1 formation, and this is true to a certain extent. In possession, the away side made use of a 4-3-3 formation: Mahmoud Dahoud dropped slightly deeper within the six spaces. 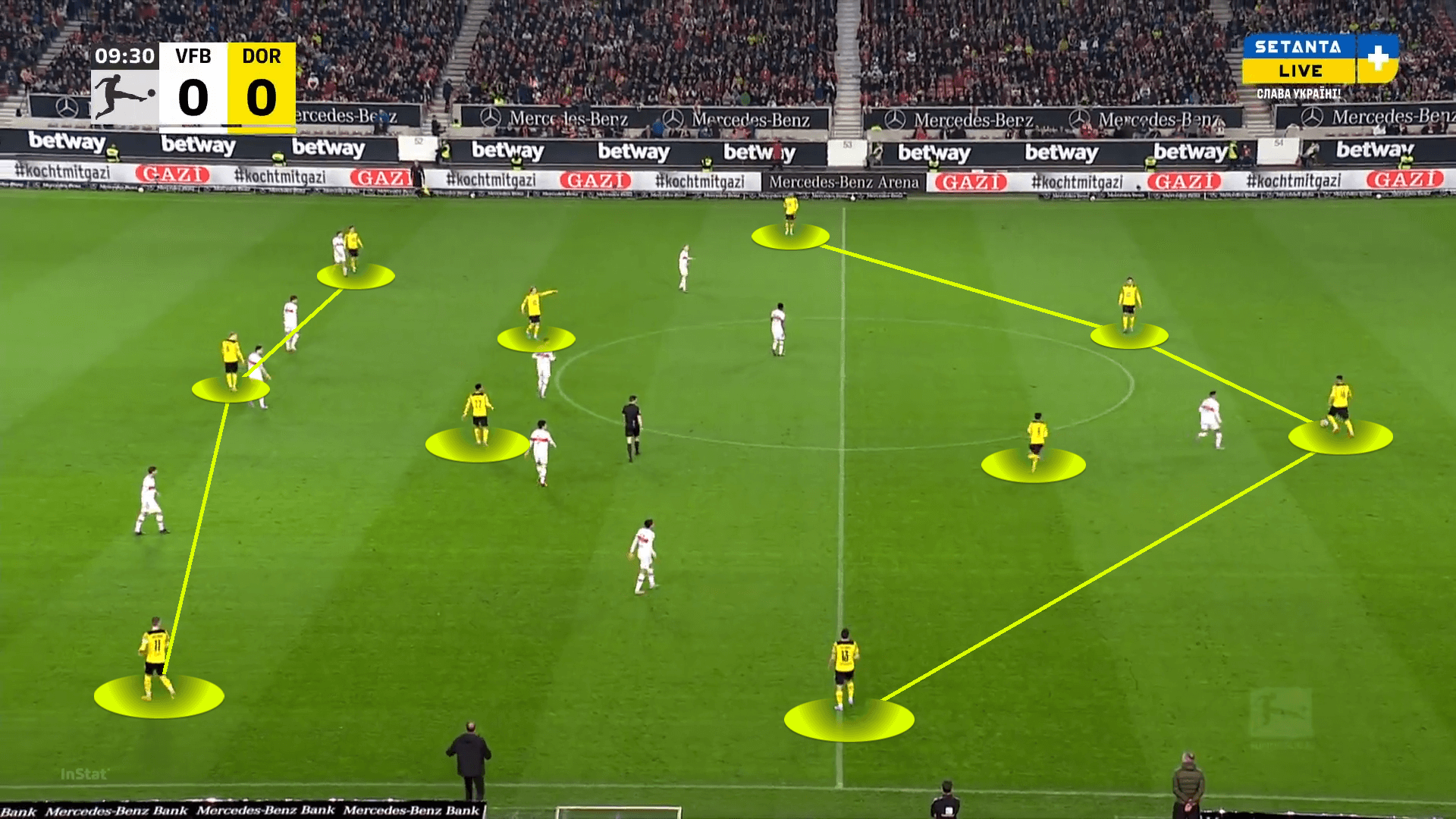 Just ahead were Jude Bellingham and Julian Brandt, after replacing Gio Reyna because of injury. During the build-up phase, Marco Rose would position his full-backs, Raphaël Guerreiro and Emre Can high and wide. Mahmoud Dahoud in a deeper position was utilised to circulate the ball. Altogether, during this match like Stuttgart, Dortmund’s superpower was the wide areas, as well as the half-spaces. A major asset that was put to use within this match by Dortmund was their connections between full-back and winger. Frequently Dortmund’s full-backs will hug the touchline, while wingers, Thorgan Hazard and Marco Reus would slightly inside, occupying Stuttgart’s full-backs. This occupation was quite useful as space was created out wide for the like of Raphaël Guerreiro to take advantage of with his clinical progressive passing and crossing ability. Here we Manuel Akanji in possession of the ball, attempting to build up from the front against their opposition’s block. Jude Bellingham is in a position in the high space in a deeper position, while Marco Reus and Raphaël Guerreiro occupy the same vertical line. 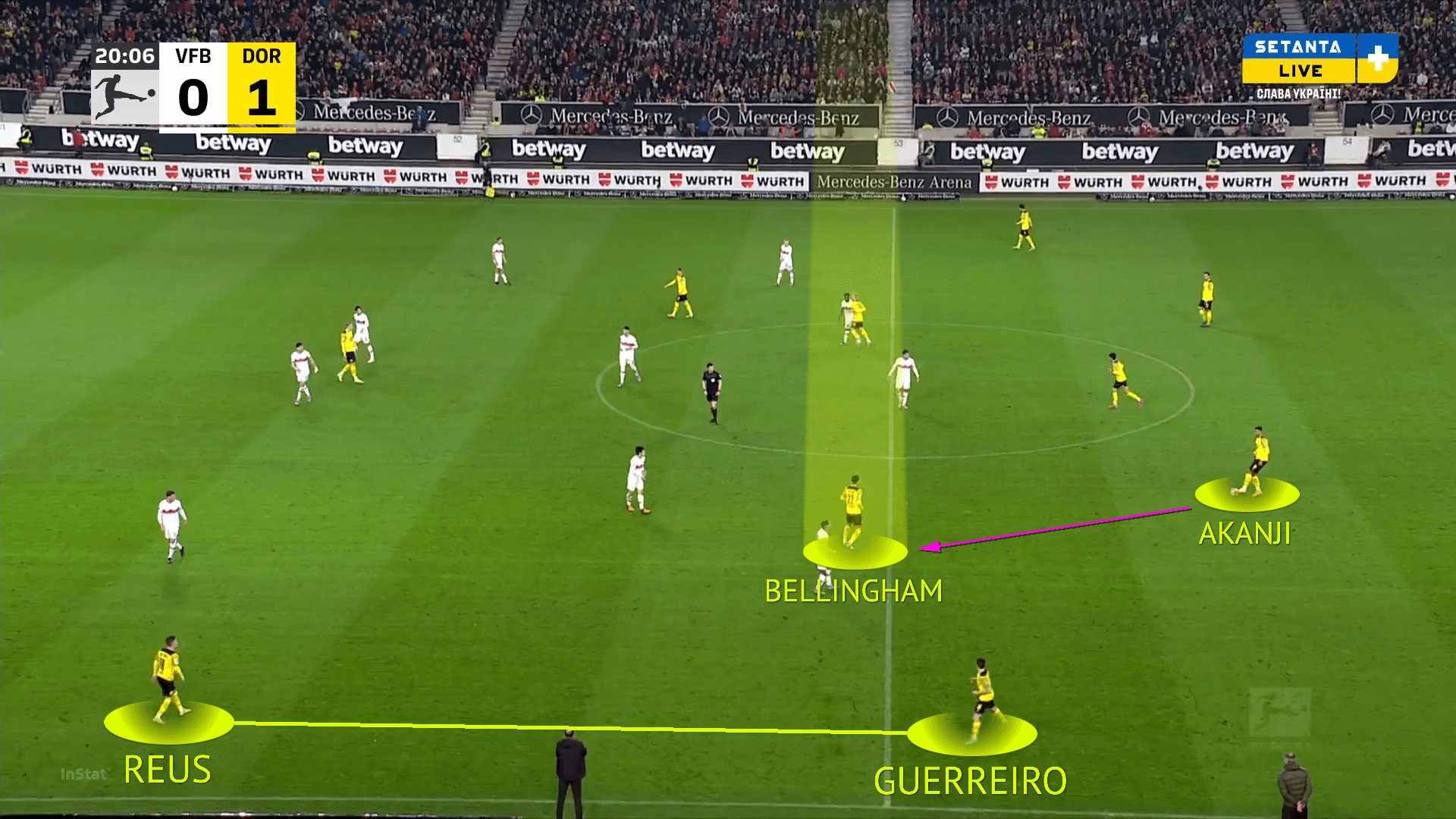 Bellingham receives the ball from Akanji; Marco Reus drops and drags the opposition full-back, creating a space in Raphaël Guerreiro to make his run. Jude Bellingham slings a well-crafted ball over Stuttgart’s defensive line, and in doing so, creates an attack within a quick series of passes.

Here we have Julian Brandt receiving a pass from a teammate, in a large amount of space. The significance shown within this example is the positioning of Erling Haaland. Julian Brandt is afforded so much space, based upon Erling Haaland occupying Stuttgart’s full-back, meaning he cannot push out and put pressure on the ball carrier. Jude Bellingham and Julian Brandt did well within these positions; they could receive quickly and swiftly while contributing to their team’s attacks and creating shooting opportunities for others. 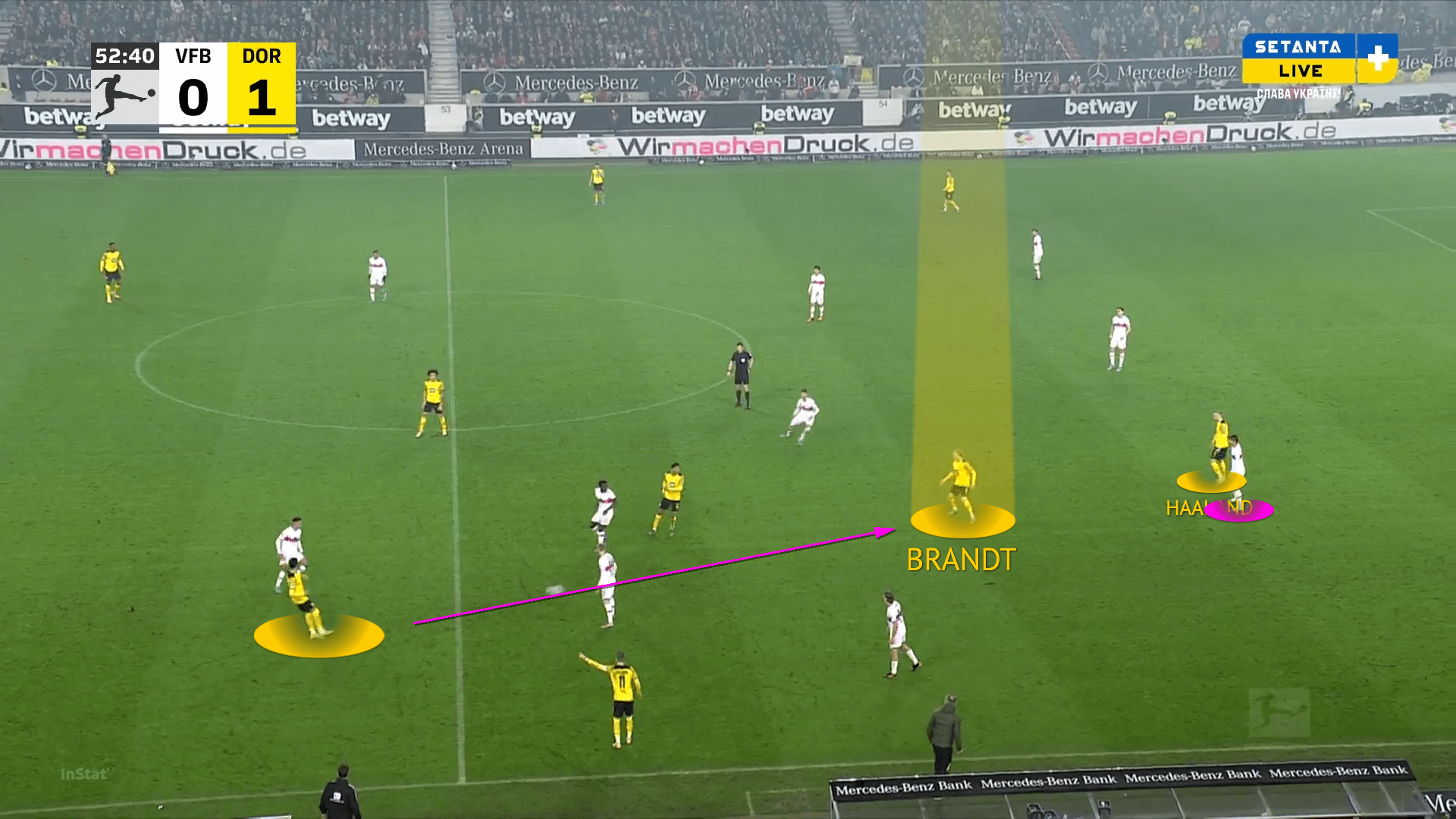 While both VfL Stuttgart and Borussia Dortmund sit in different quarters at the Bundesliga dining table, the two teams share a commonality. They live to entertain. Relatively new manager Marco Rose has brought his fun style to the West German club from Borussia Mönchengladbach, while Pellegrino Matarazzo’s men continue to play a nice brand of football while battling relegation. When these two teams met on Friday night, most expected a fun affair, regardless of the significance of the fixture. Throughout, Dortmund dominated proceedings. With this being said, when looking at the quality of chance created from both sides, Stuttgart showcased there was still life in them. The home side failed to convert, and Dortmund’s tactical positioning and flexibility proved too strong. Dortmund’s season is essentially over, as they have no European football to play and Bayern Munich’s stronghold upon the Bundesliga title. Regardless, Marco Rose is doing an excellent job, and all are hoping next year, improvement will come.