América made history by qualifying for the Copa Libertadores for the first time in the club’s history. More impressively, the club achieved this in their first season back in Brazil’s first division. After Vagner Mancini left for Grêmio halfway through the 2021 Brasileiro, Marquinhos Santos did a great job in not only surviving relegation but also breaking into the top half of the table. After beating Paraguay’s Guarani and Ecuador’s Barcelona in the qualification rounds, América look to be competitive in their first-ever Libertadores appearance.

On the other hand, Independiente del Valle, or IDV, have been significantly increasing their reputation over the past decade. They reached Ecuador’s first division for the first time in their history back in 2010. Since then, they have been constantly appearing in continental competitions. With the young Spanish manager, Miguel Ángel Ramírez, they won the Copa Sudamericana as the first trophy in the club’s history. After Ramírez departed for Internacional in early 2021, they hired another European manager in the Portuguese Renato Paiva. In 2021, Paiva won Ecuador’s first division.

In this tactical analysis, we will examine both teams’ tactics in this match, and what gave IDV the edge in this tight contest.

In 2022, América have alternated between a 4-3-3, a 4-4-2, and a 4-2-3-1. Against IDV, they lined up in a 4-3-3. While Jaílson was in goal, Patric, Conti, Iago, and Marlon were the back four. Lucas Kal was the single pivot behind Alê and Juninho. Paulinho Bóia was the centre-forward flanked by Everaldo and Pedrinho.

Independiente del Valle lined up in a dynamic 5-4-1, which could turn into a 3-4-3 offensively. Ramirez was in goal, with Carabajal, Schunke, and Segovia as the centre-backs. Perlaza was the right wing-back while the young Chávez played on the left.  Faravelli and Pellerano were the two midfielders while Previtali and Sornoza were more advanced. Ayoví was the centre-forward. 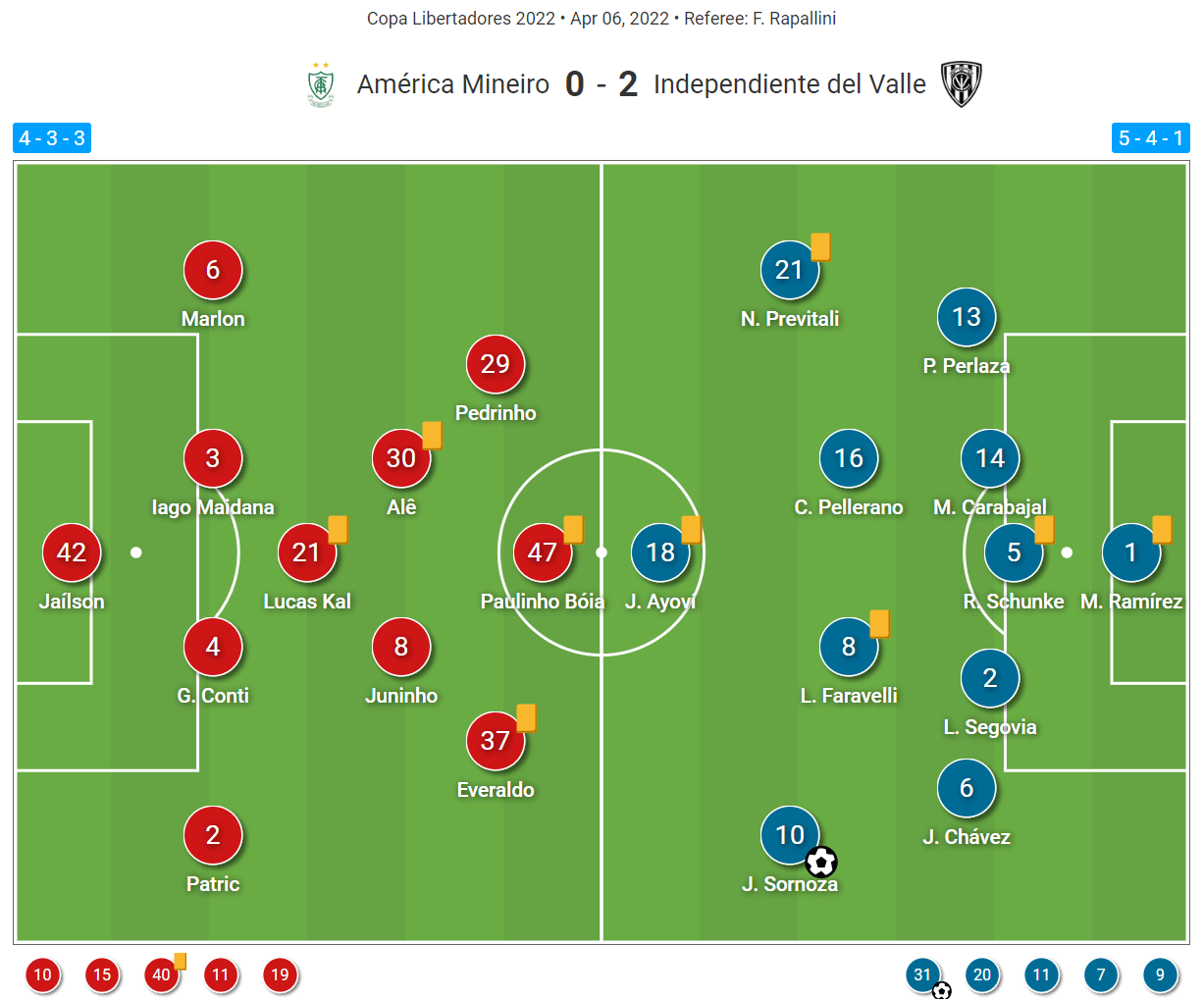 Coming into this match, both teams looked to dominate possession. In 2022, América average 58.52% possession compared to IDV’s 60%. As both teams value possession and aim to keep the ball, the end result was obvious. Each team had large spells of possession throughout the 90 minutes, as seen in América’s possession timeline below. 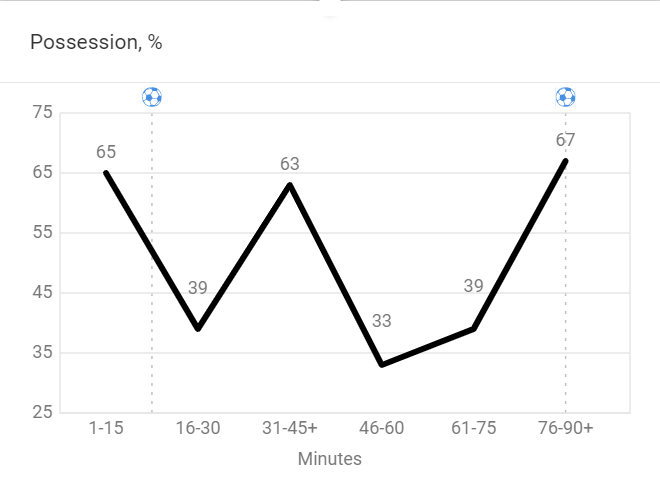 Especially in the first half, América had a lot of possession in IDV’s half as they looked to create chances and control the match. They set up in a traditional 4-3-3 shape, but with a couple of tweaks. First, left-back Marlon Lopes had more freedom going forward than right-back Patric. Lucas Kal was the single pivot, often dropping deep to get the ball while the two midfielders sat higher. The wingers sat as wide as possible. 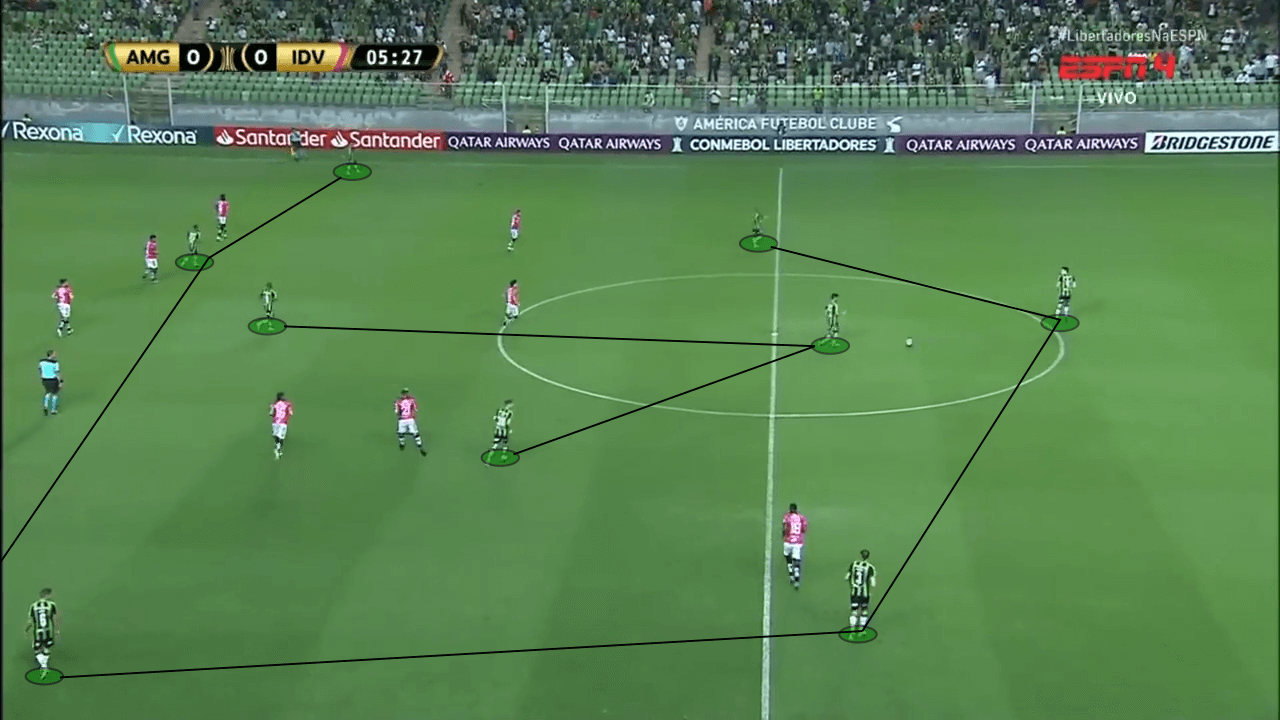 As the wingers had traditional roles and sat very wide, the fullbacks operated slightly more central. In possession, both Marlon and Patric would drift inside to participate in the midfield. In the image below, both players are positioned more inside. Note how wide Everaldo, the right winger, is. 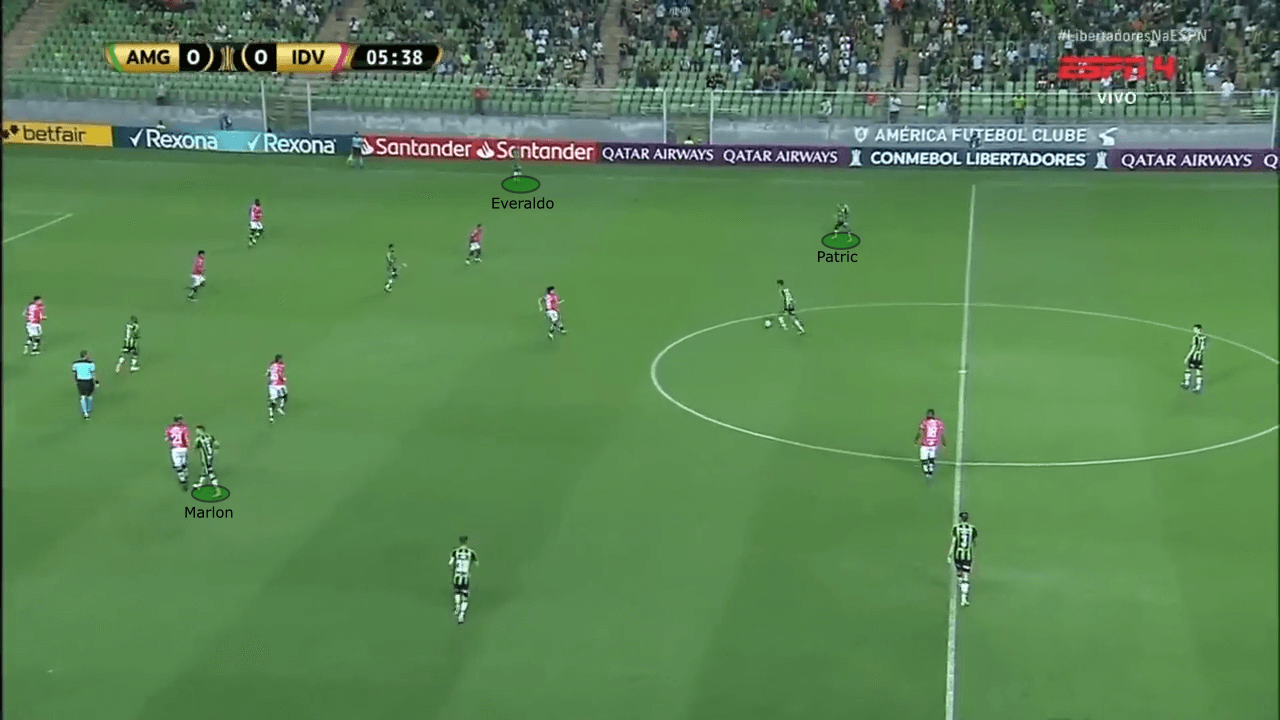 One of América’s strategies was to attack through the wide channels by creating numerical superiority. However, IDV’s extensive defensive system did not allow this. They were able to not only match but often have more numbers than América in the wide channel. IDV were also very effective in maintaining their shape through rotations and communication. Despite averaging 20 crosses per 90 in 2022, América only had 13 in this match, with only one of them being successful. This further highlights their inability to create wide. 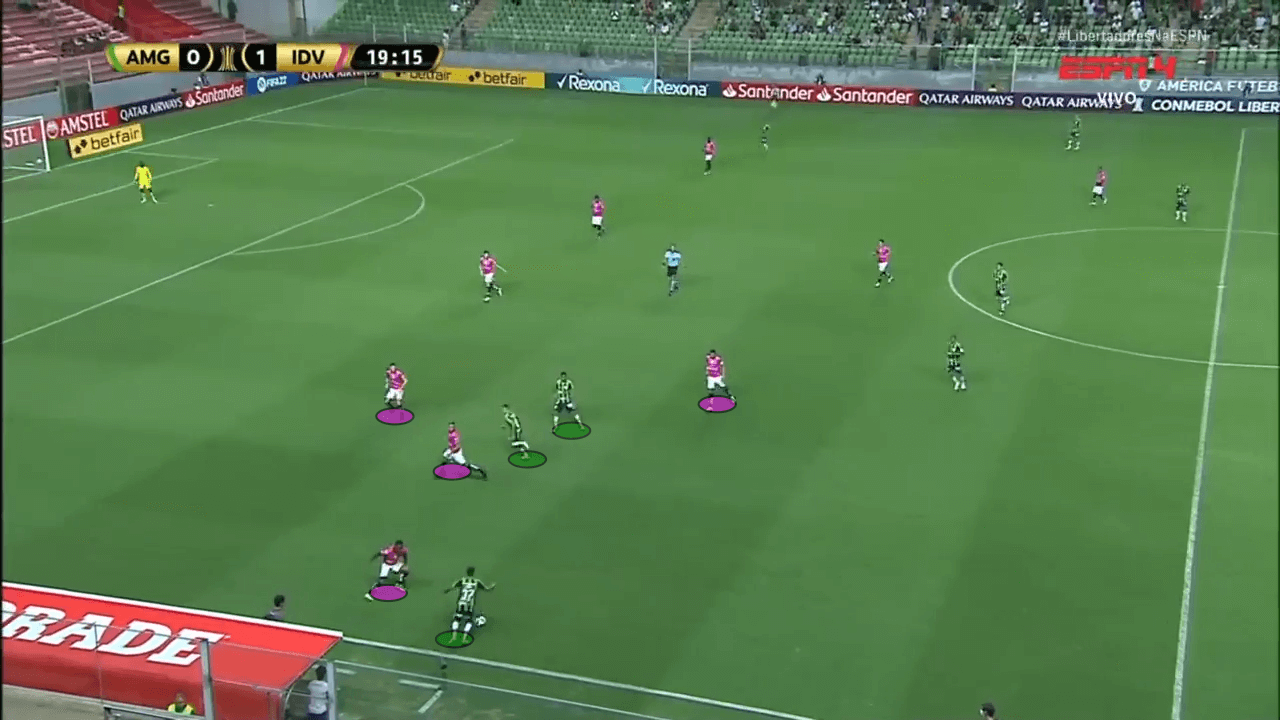 As América are a team that value possession, they did not take many risks. They had a very patient approach to possession, which offered no dynamic and was often far too passive. While patient approaches can be successful, it was far from it in this match. IDV had a very compact block and América’s lack of intensity and risk-taking made them ineffective. In the example below, América attempted to attack through the wide channel. As each player is tightly marked, they simply play it back and recycle possession. 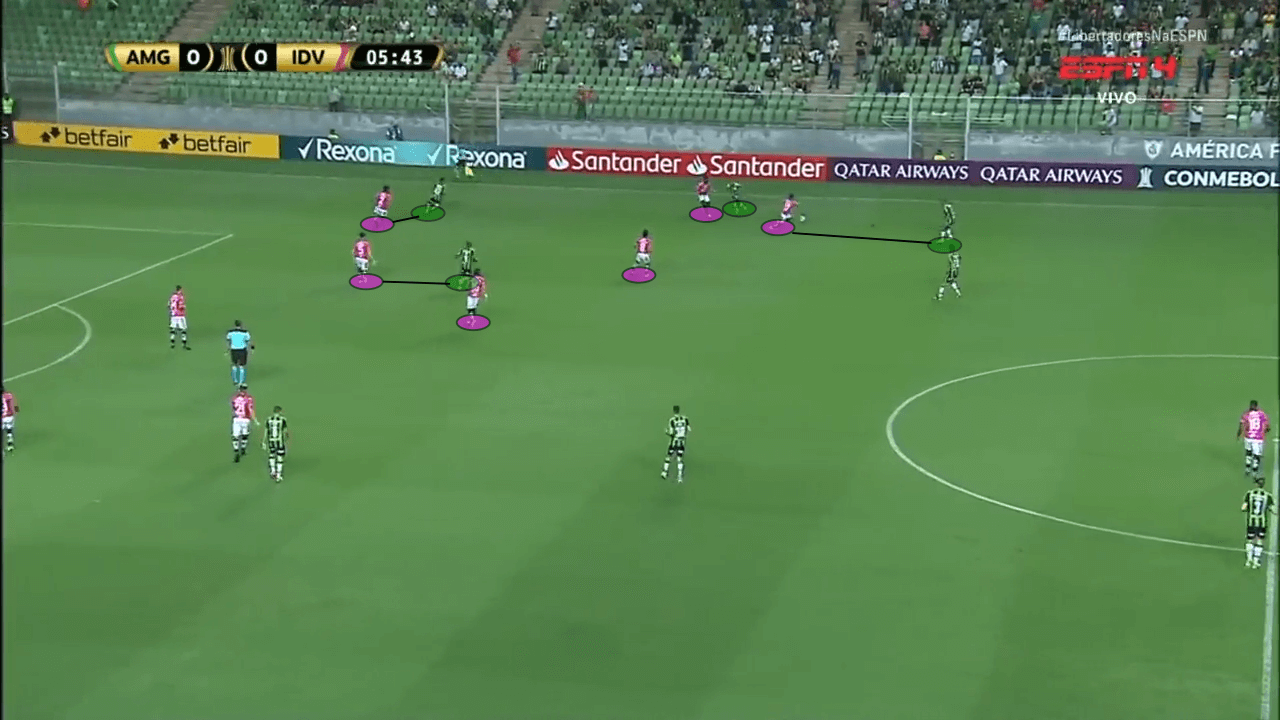 As the match went on, América often got frustrated and settled for long-range opportunities. Their average shot distance in this match was 24.23 metres compared to IDV’s 14.06. As these have an xG of very little, they offer next to no threat. While América’s xG of 1.33 was similar to IDV’s 1.5, they took far more shots. América’s xG per shot was .102, far less than IDV’s .188. 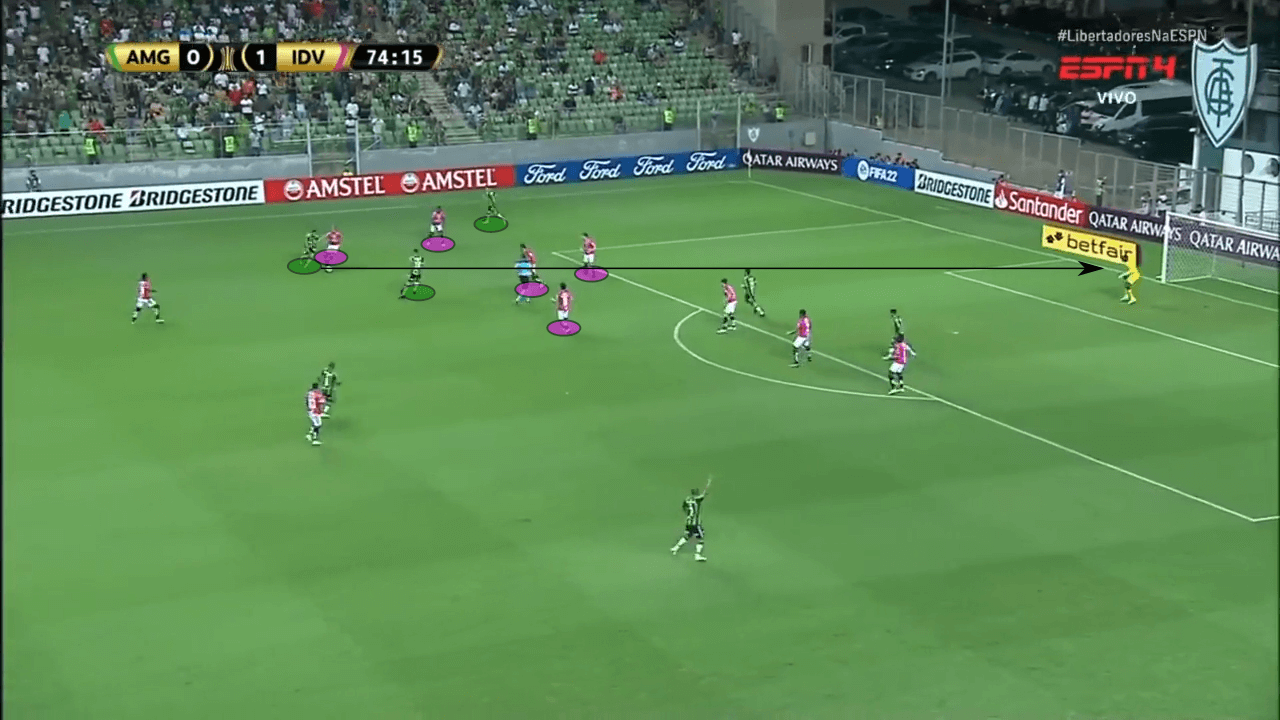 Systems with three centre-backs allow teams to be very dynamic in their organisation; one of the reasons it is becoming so popular in world football. While IDV’s system allows them to attack with numbers, it also allows them to defend with numbers. Defensively, they set up in a very compact 5-4-1. Rather than two traditional lines of four, the 5-4-1 allows for an extra player to cover at the back. When América would try to attack through the wing, both the wide midfielder and the wing-back would be there. In addition, the wide centre-back and one of the midfielders would also join to provide cover. This system allowed them to defend the wide areas very well. The image below illustrates their defensive structure. 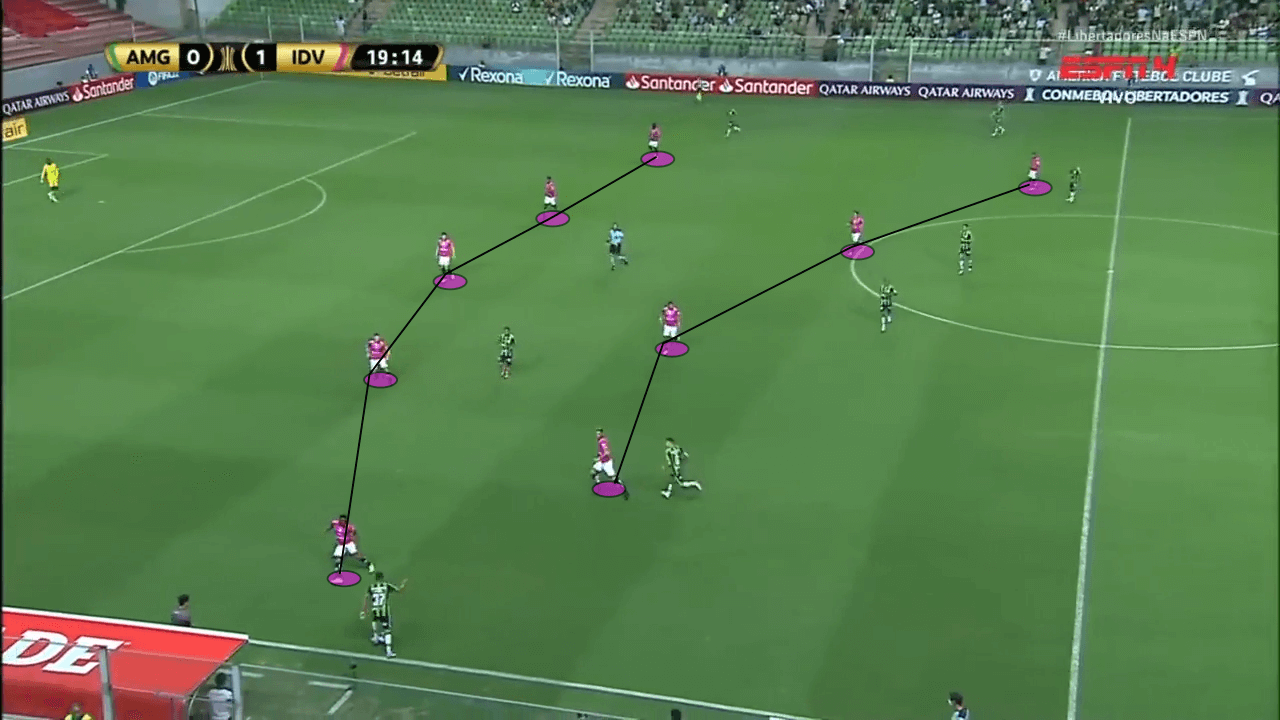 In addition to having a lot of numbers defensively, they were very compact. They did not offer much space in between the lines, especially in lower blocks. This meant they had essentially ten players in a very small area where América would be trying to create. This allowed no space or time at all for América. In the image below, even the centre-forward has dropped to his own third to defend. They have all 11 players inside their own third. 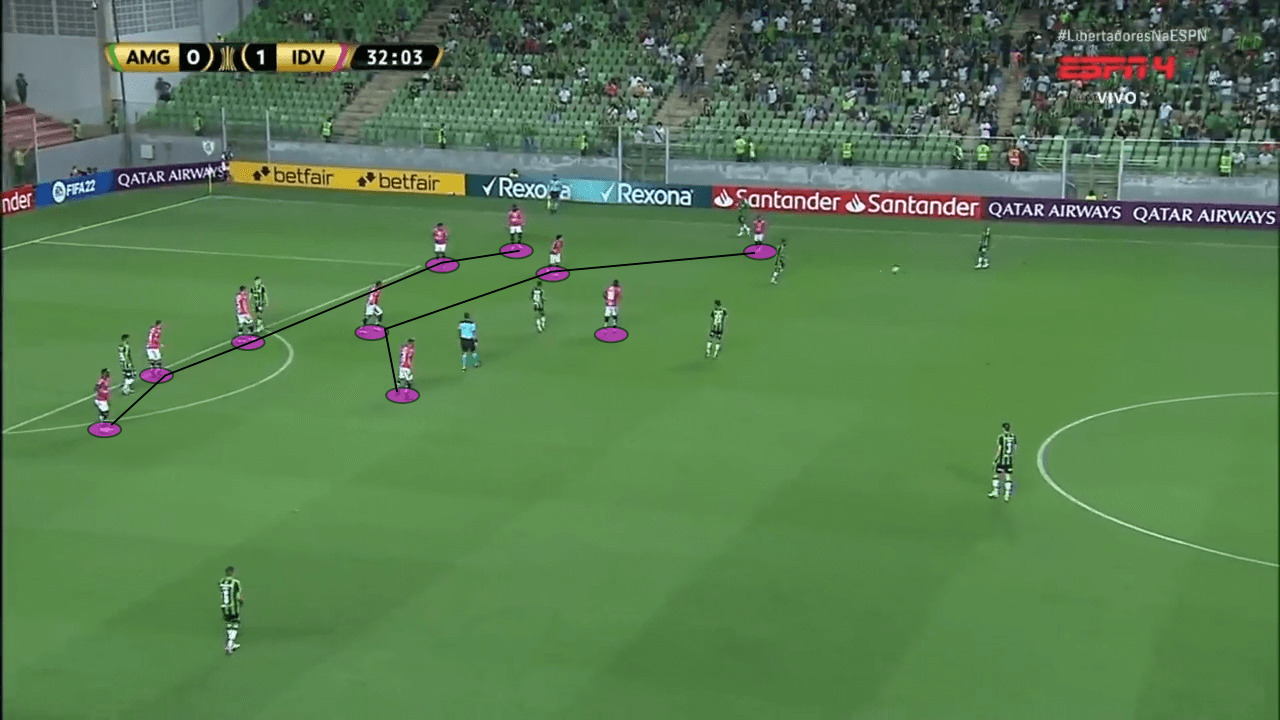 From the very first minute, América looked to press IDV’s build-up. They were aware of IDV’s possession-based approach and did not want to allow them to construct anything. As a consequence, much of the first half was played in IDV’s half, with IDV often having to settle for direct play. América’s high press was fairly successful in keeping IDV from having a controlled construction, but it drastically failed in many other aspects which we will examine later. The image below highlights what percentage of IDV’s passes were long passes throughout the 90 minutes. Note how in the first half, América’s high press forced them to have a higher long pass %. 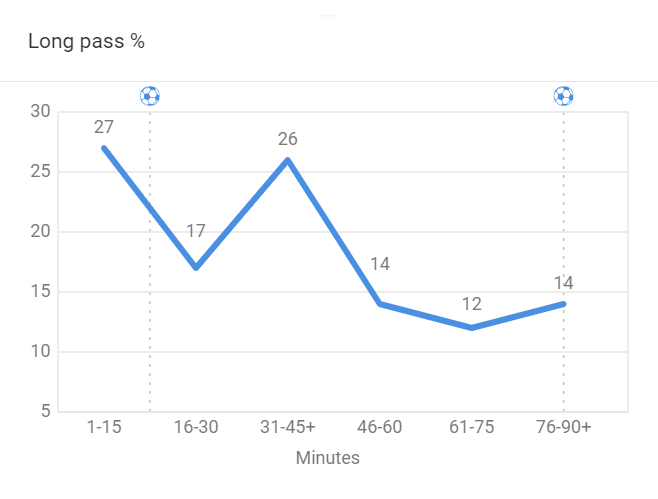 América were focused on pressing IDV’s build-up and had a very aggressive pressing structure. Their front three would lead the press but in a much more narrow shape. At times, one of IDV’s midfielders would drop deeper and act as a single pivot. One of América’s midfielders would man-mark him. 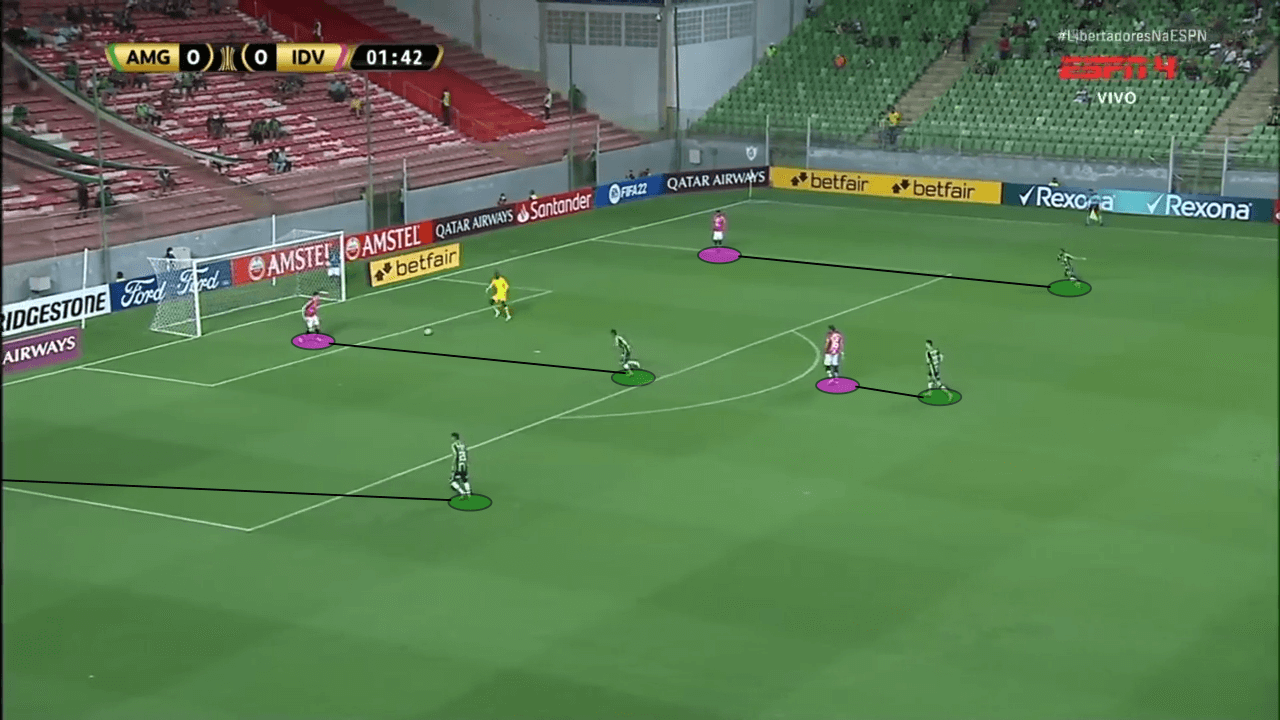 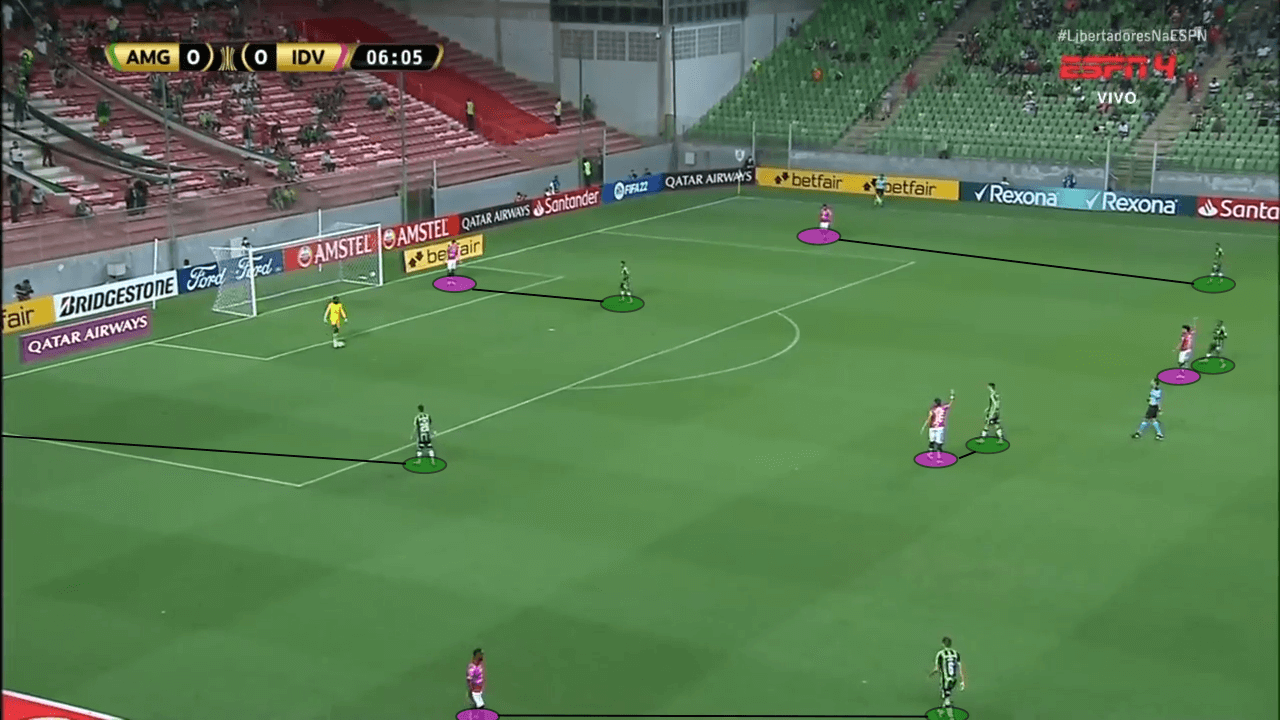 As they wanted to match IDV’s numbers in the build-up zone, they had no extra defender at the back. Usually, teams will always make sure to have an extra defender in the last defensive line to provide cover. If a front three sits high, four defenders would need to stay, and so forth. However, América completely ignored this concept and left three defenders to defend three attackers in the last line. While this allowed them to be effective in their press high up the pitch, it left them incredibly vulnerable further back. 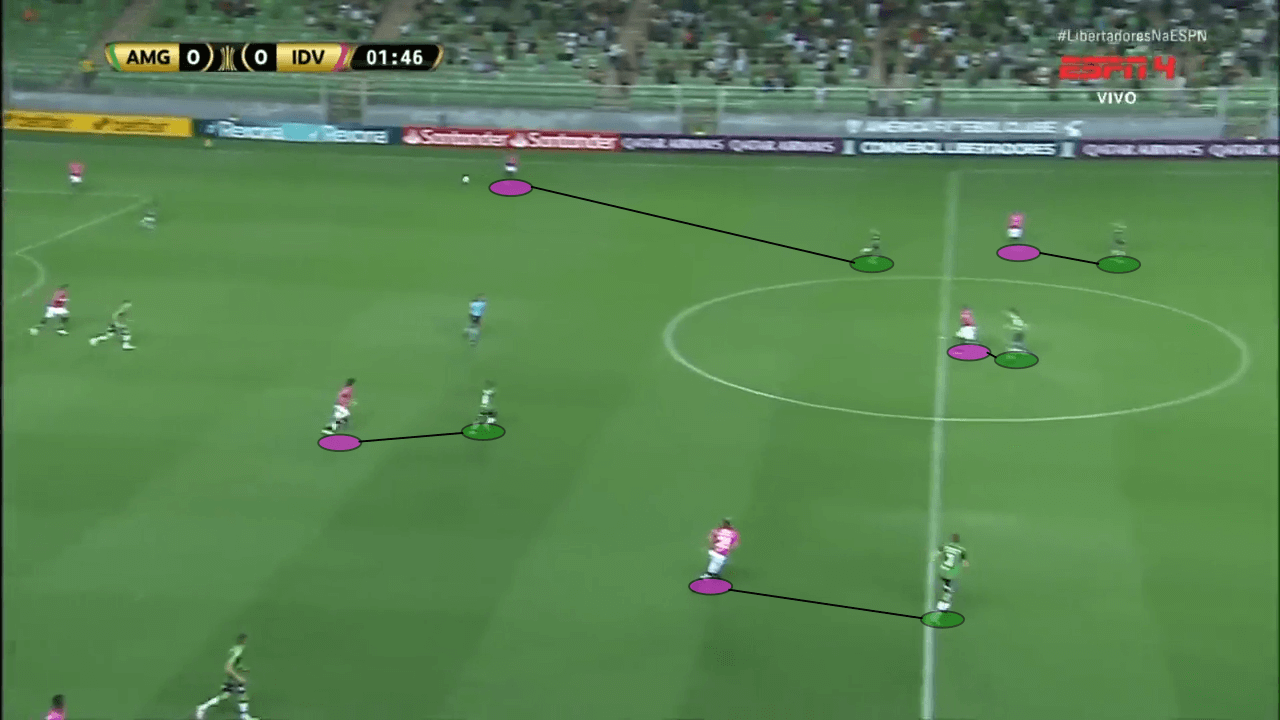 Another manner through which América tried to control possession was their counter-press. Immediately after losing the ball, they would clutter the ball carrier in an attempt to gain it back. This ball-oriented counter-press allowed them to box IDV’s players in and either win it back or prevent them from countering. 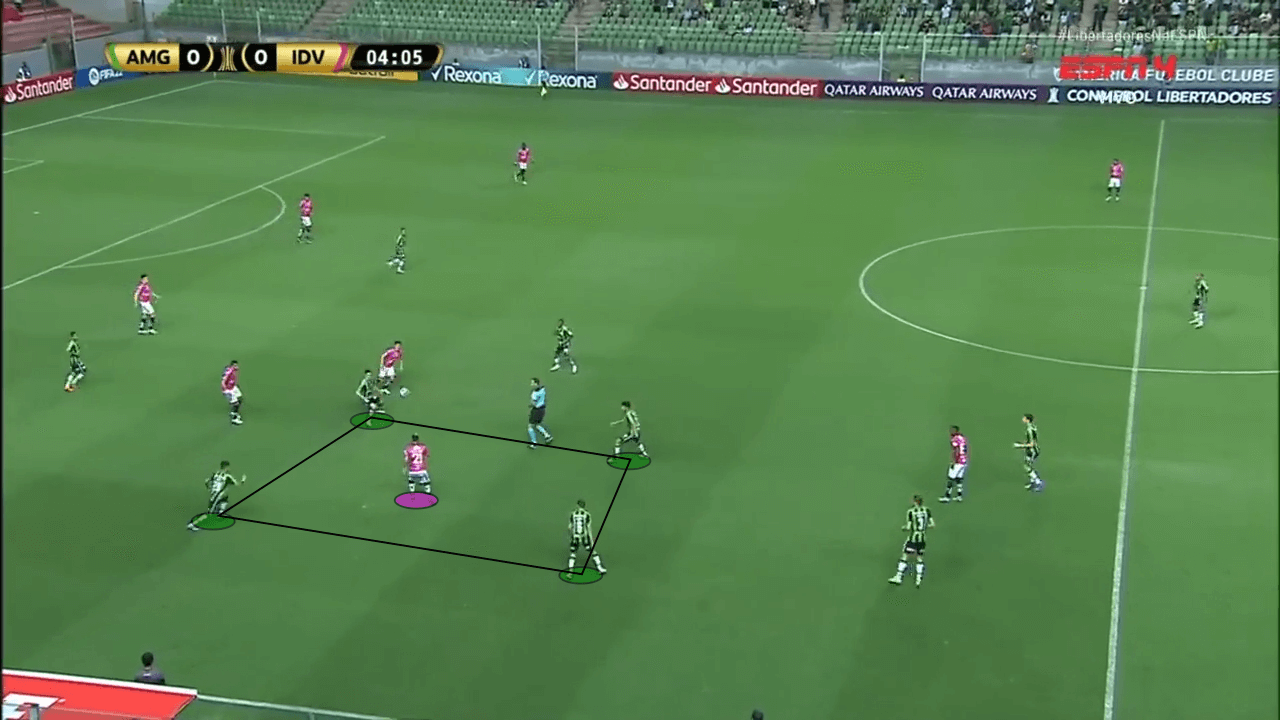 As we have seen, América aimed to press extremely high in an attempt to keep IDV from having possession. Their high press was effective in keeping IDV from doing so, but it had drastic failures elsewhere. América wanted to match IDV’s numbers in the build-up phase and, as a consequence, did not leave an extra player to cover on the last line. This left them extremely vulnerable to IDV’s direct play.

IDV were unable to build up in a controlled manner, so they adopted a more direct approach. After realising América left no extra player to cover, they started finding the forwards with long balls. When successful, the forwards would almost be in a counterattack situation with a lot of space to attack.

IDV’s Ayoví was often the target man, but the other two were also involved. Whoever the target was, they were constantly successful in bringing it down and linking up with the other forwards.  In the example below, Ayoví receives a long pass and has two forwards next to him. 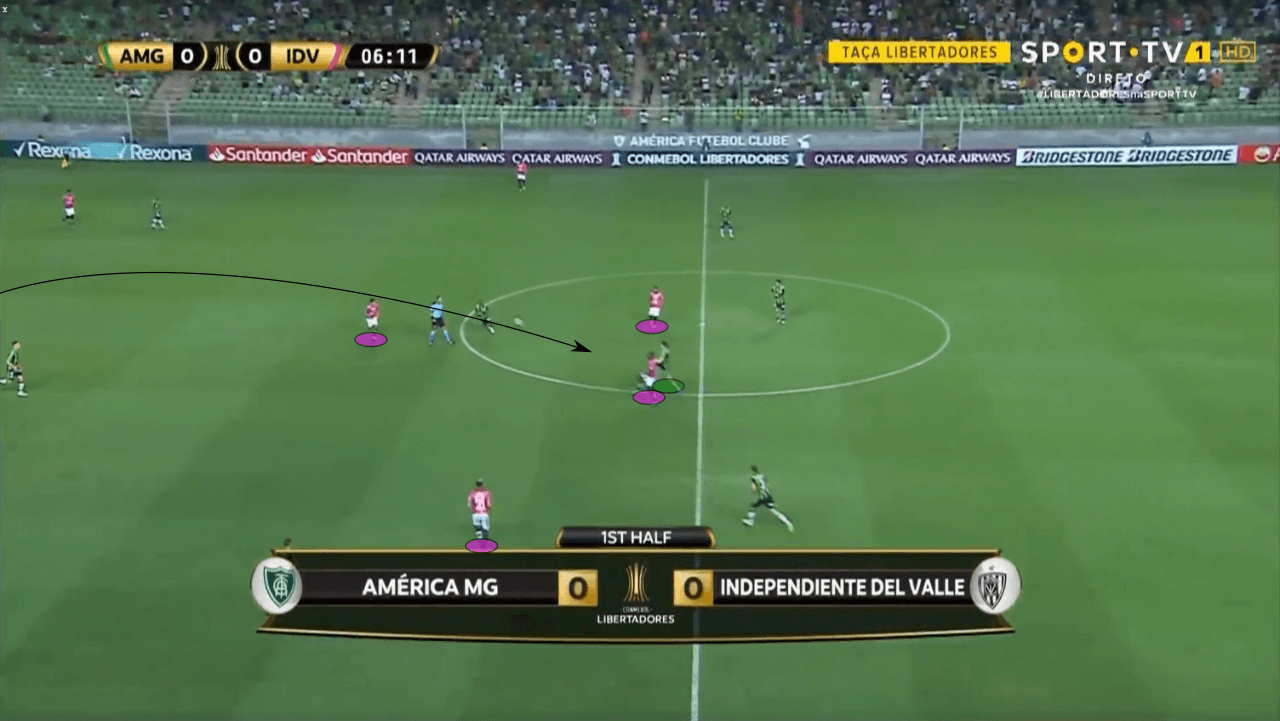 IDV’s Schunke was key to this approach with his long passing. He attempted 13 long passes in this match, completing an impressive nine of them. Two of them were in fact key passes. His map below illustrates his long-range passing in this match. The two key passes were from well in his own half and found players in great areas. 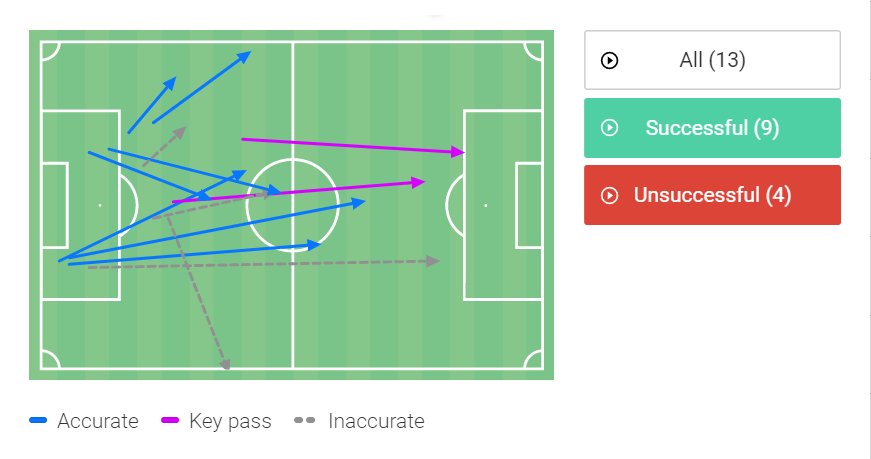 Schunke’s assist to the first goal was one of a kind. He launched a long ball from near his own box to find Sornoza making a run in behind the defensive line. Sornoza was able to control it with a superb touch and score the first goal. 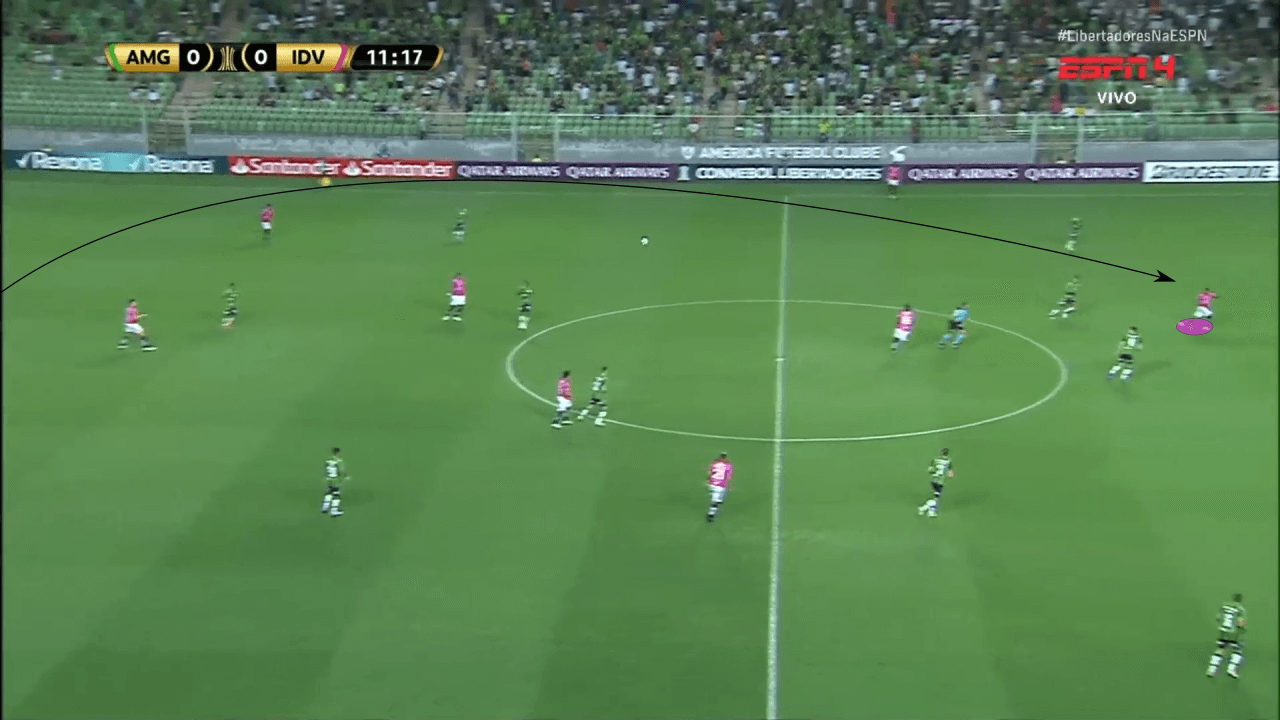 Another reason for IDV’s success in direct play was América’s failure to transition. Whether it was transitioning into the defensive phase or simply transitioning from a high to a lower block, they were incredibly slow. In the instance below, IDV is able to win the ball and counterattack. The forwards were very slow in tracking back, and the defence took far too long to get organised. 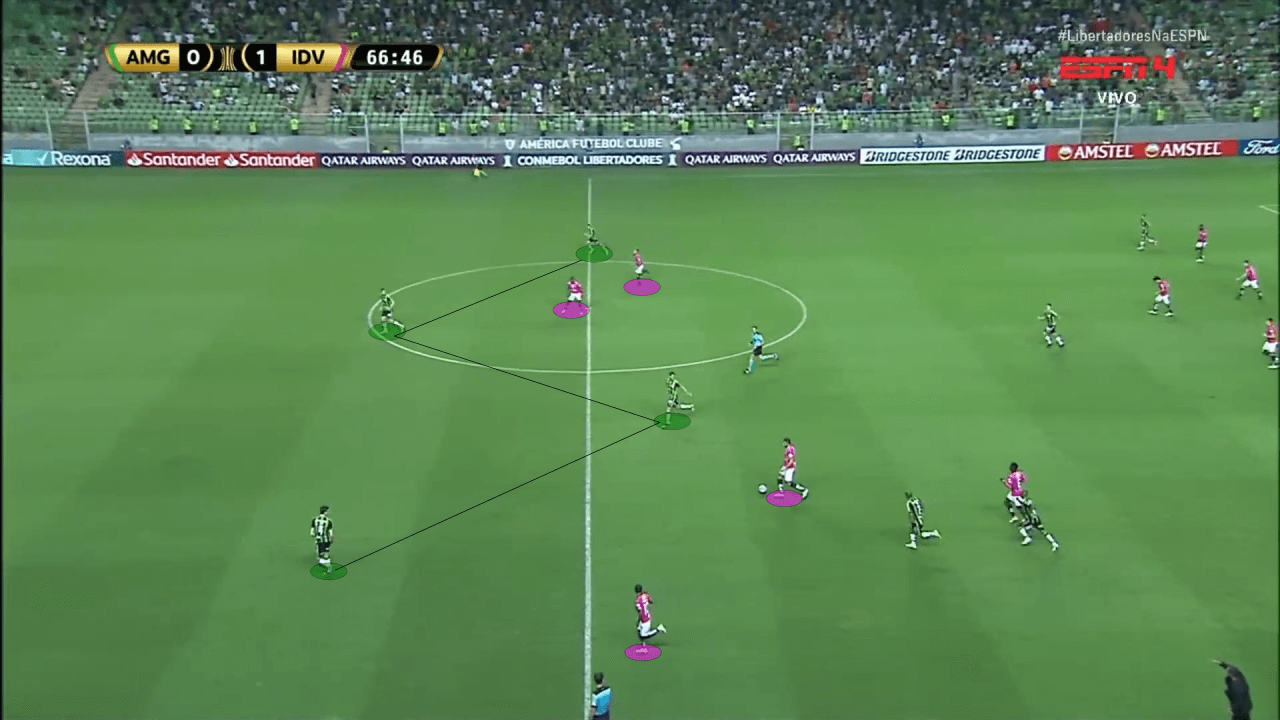 In the counterattack below, América’s failure to transition is further highlighted. After the corner, IDV begin their counterattack. At the time, IDV has 10 players in that third compared to América’s eight. However, the six América players highlighted make very little effort in transitioning to defence. 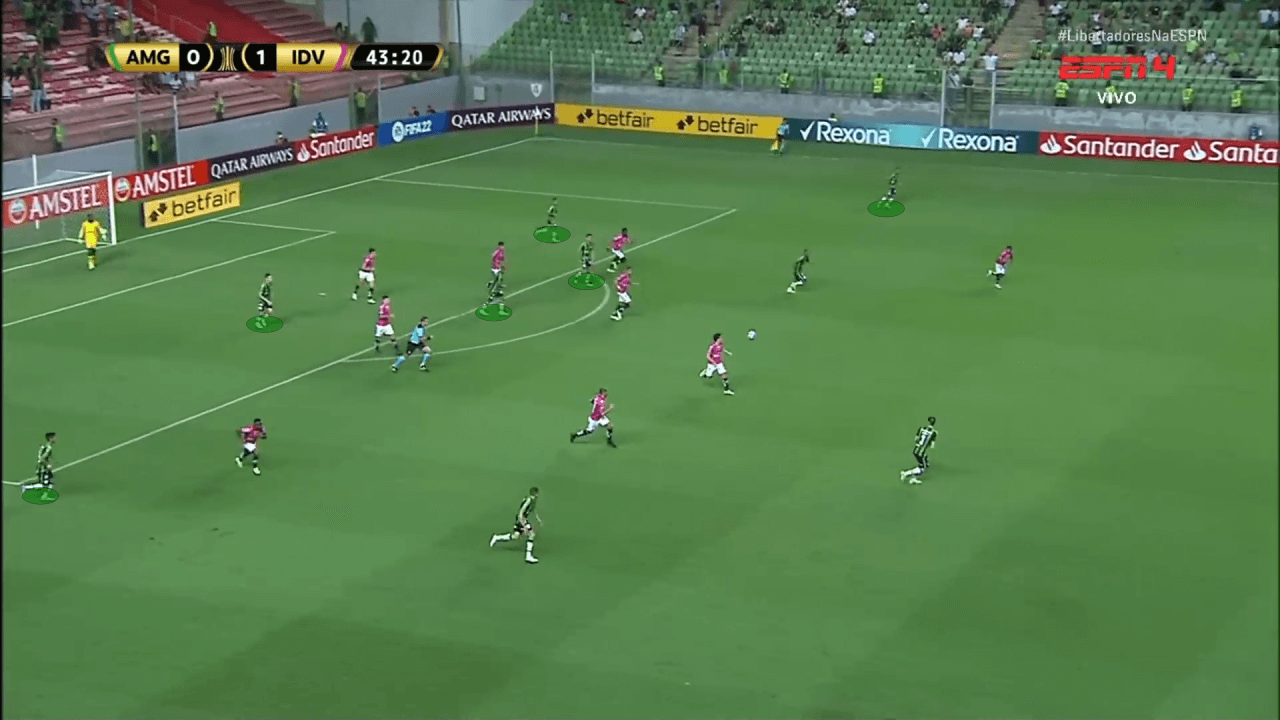 A few seconds later, IDV are in América’s half with a 6v4 superiority. América’s inability to transition could have cost them much more on Wednesday night. 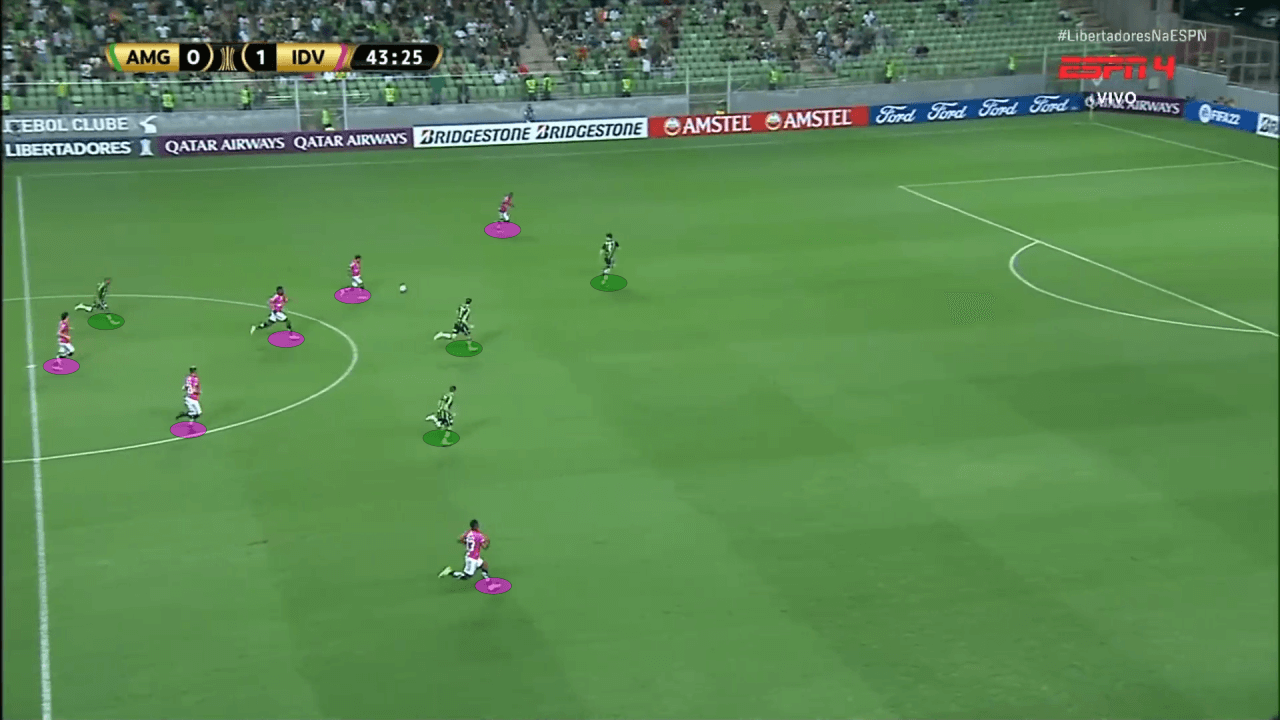 Finally, IDV’s second goal was a result of their slowness to get organised. América’s centre-back fails to recover and nobody else provides drops for him. As a result, there is a massive lane where the defender should be. After a through ball is played into that channel, IDV score the second and finish the game off. 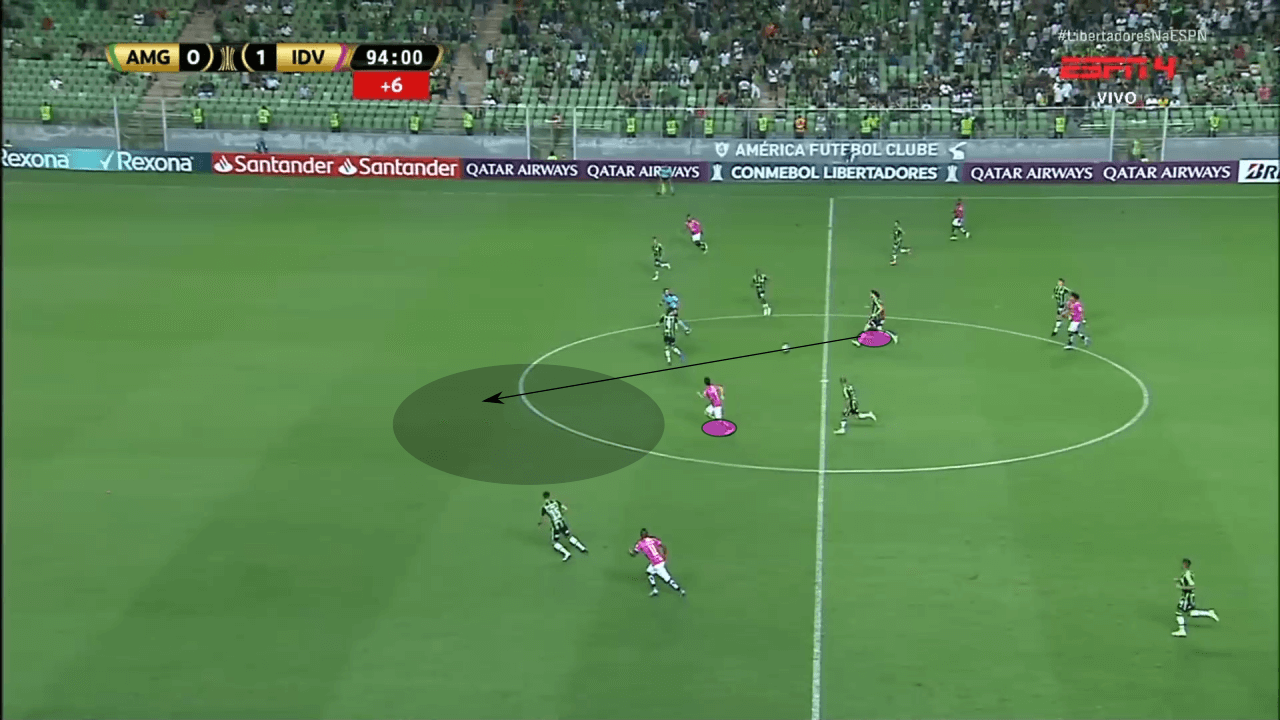 América Mineiro versus Independiente del Valle proved to be an interesting tactical battle on the first matchday of the Copa Libertadores. While both teams came in with similar tactics, Independiente del Valle gained the edge in a very tight contest. América’s strategy had some flaws that IDV were able to exploit and win the match. América also had some shortcomings which they will want to address as the Brasileiro kicks off. Both teams come to the Libertadores with very interesting stories as they look to be competitive in what may prove to be a very difficult group.