Bayern Munich welcomed Fortuna Düsseldorf to the Allianz Arena for their Bundesliga match on matchday 29. Düsseldorf, who came into the game with 29 points, knew that it would be a challenge to come away with any points on the day. They were correct in that analysis, falling to the Bavarian club by a score of 5-0. While Düsseldorf certainly created the occasional chance, Bayern constantly overwhelmed them, with the result never really being in doubt.

This tactical analysis will examine the tactics used by both Hansi Flick and Uwe Rösler during their Bundesliga match. Rösler’s side valiantly stuck to their principles of play, but Flick’s squad dominated most of the match, allowing them to maintain their seven-point lead over Borussia Dortmund. 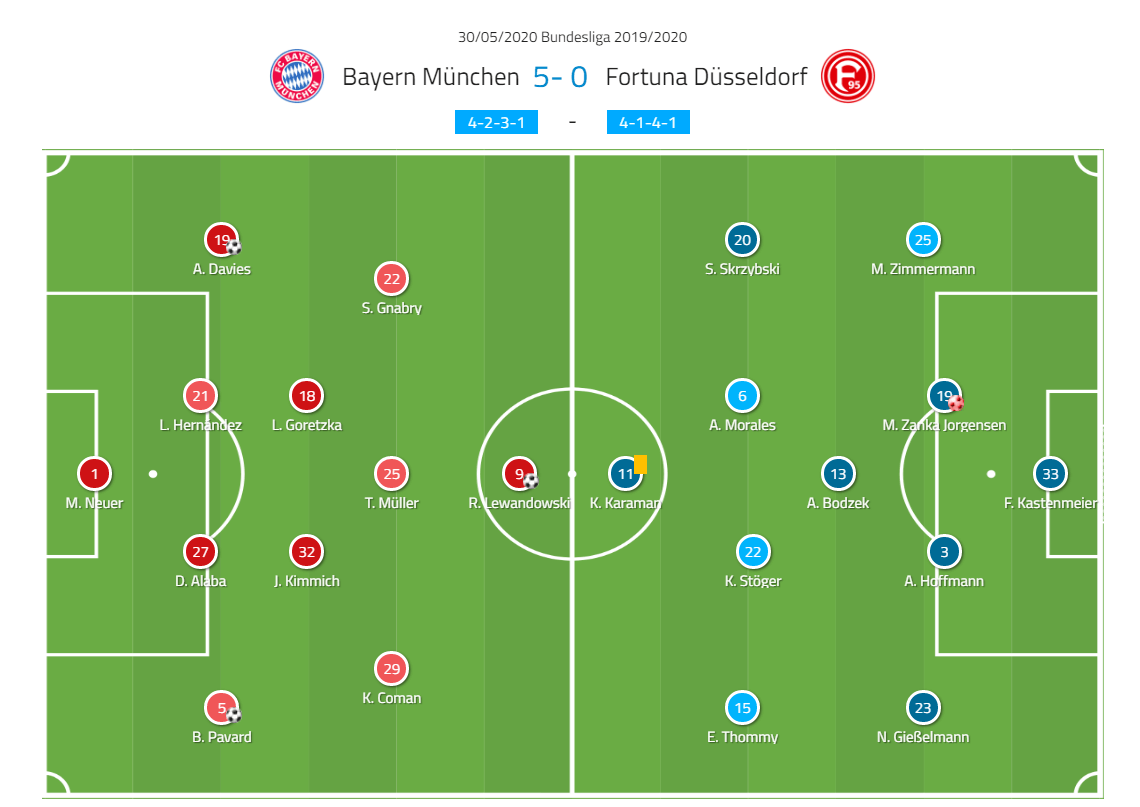 Hansi Flick set his team up in their usual 4-2-3-1 with Manuel Neuer in goal. Benjamin Pavard and Alphonso Davies were the outside-backs for the Bavarians, with David Alaba and Lucas Hernandez as the centre-backs. The two holding midfielders were Joshua Kimmich and Leon Gortetzka. In front of them were Serge Gnabry, Thomas Müller, and Kingsley Coman with Robert Lewandowski as the striker.

Uwe Rösler sent his squad out in a 4-1-4-1 formation with Florian Kastenmeier in goal. Matthias Zimmermann was the right-back and Niko Gießelmann was the left-back while Mathias Jørgensen (Zanka) and André Hoffmann were the centre-backs. Adam Bodzek was the holding midfielder with Erik Thommy, Kevin Stöger, Alfredo Morales, and Steven Skrzybski in front of him, with Thommy and Skrzybski on the left and right flank, respectively. Düsseldorf’s one striker on the day was Kenan Karaman.

Part of Bayern’s success against Düsseldorf, but also against almost any team they face, is their ability to use possession as a tool to manipulate their opponents. There are many ways to do this, but one of the ways they do so is by passing the ball in a diagonal manner, skipping at least one of the vertical channels on the pitch. For the sake of this explanation, assume that there are five vertical channels in total: one channel on each of the wings, two half-spaces, and the centre channel. By playing a diagonal ball up the pitch that crosses at least one of these channels, Bayern force the opponent to shift over and defend a new area in a hurry, which causes problems for the opponent if they arrive late, or in the wrong position, or if the pass is particularly excellent, among other things. 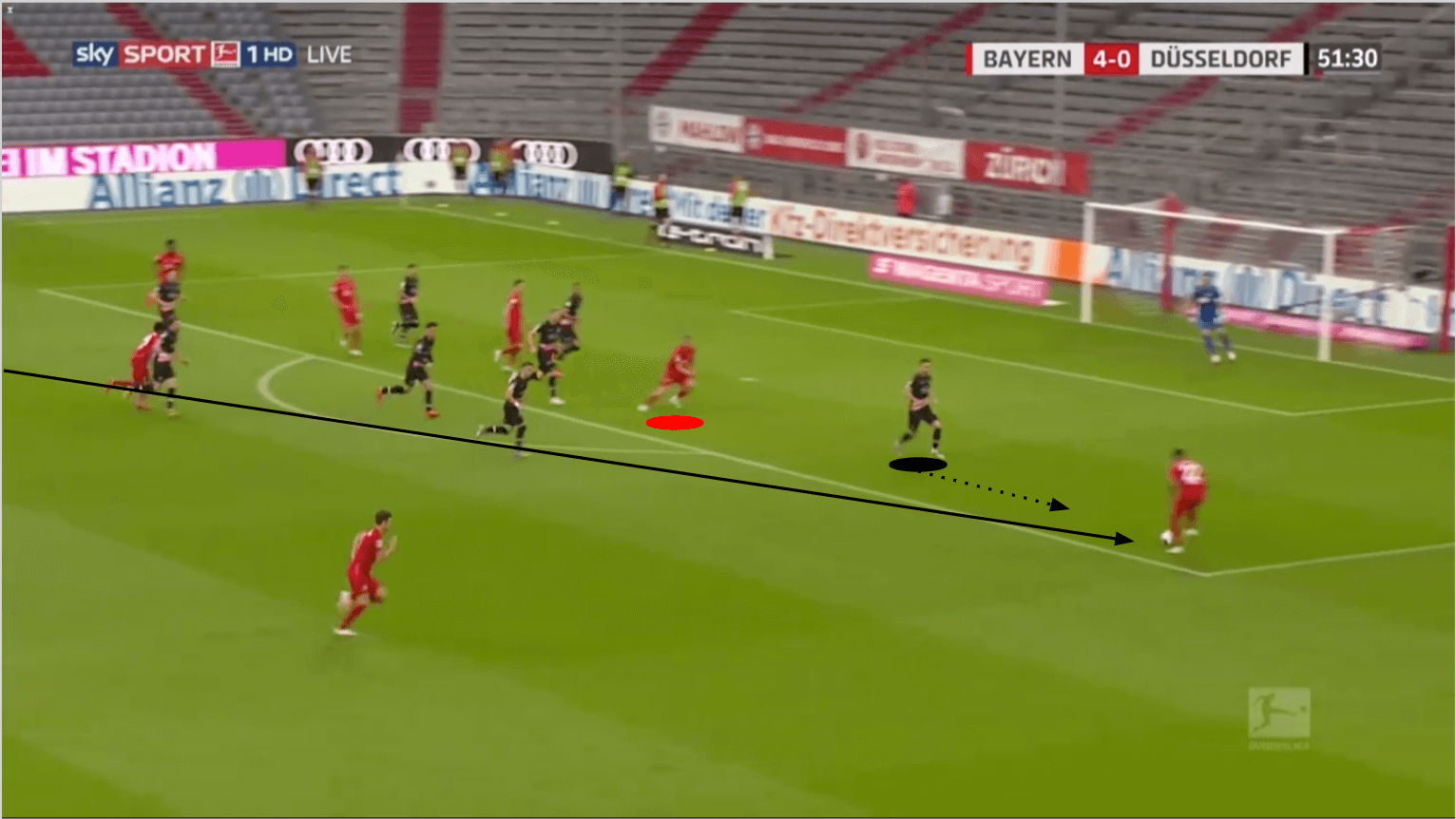 Bayern attempted to play these balls consistently in the match. These passes are the result of Bayern also implementing the “overload to isolate” principle, which essentially calls for Bayern to attract defenders to an area in order to take advantage of a place often somewhere on the opposite side of the pitch. Above, Kingsley Coman played a diagonal ball from one half-space essentially the other. What stands out is how much room Serge Gnabry had when he received the pass. The defender, who got there as quickly as possible, left a large amount of space behind him quite vulnerable. The man marked in red, Mickaël Cuisance, was now open in a large amount of space. Had Gnabry decided to play him, he would have likely been in on goal without a defender contesting his shot.

Bayern looked to do this all match. The confidence the players had in playing these balls speak to the work Hansi Flick has done in his short time in charge. Only 56% of Bayern’s long passes actually hit their intended target, but Bayern continued to play them as they looked to exploit the defence. 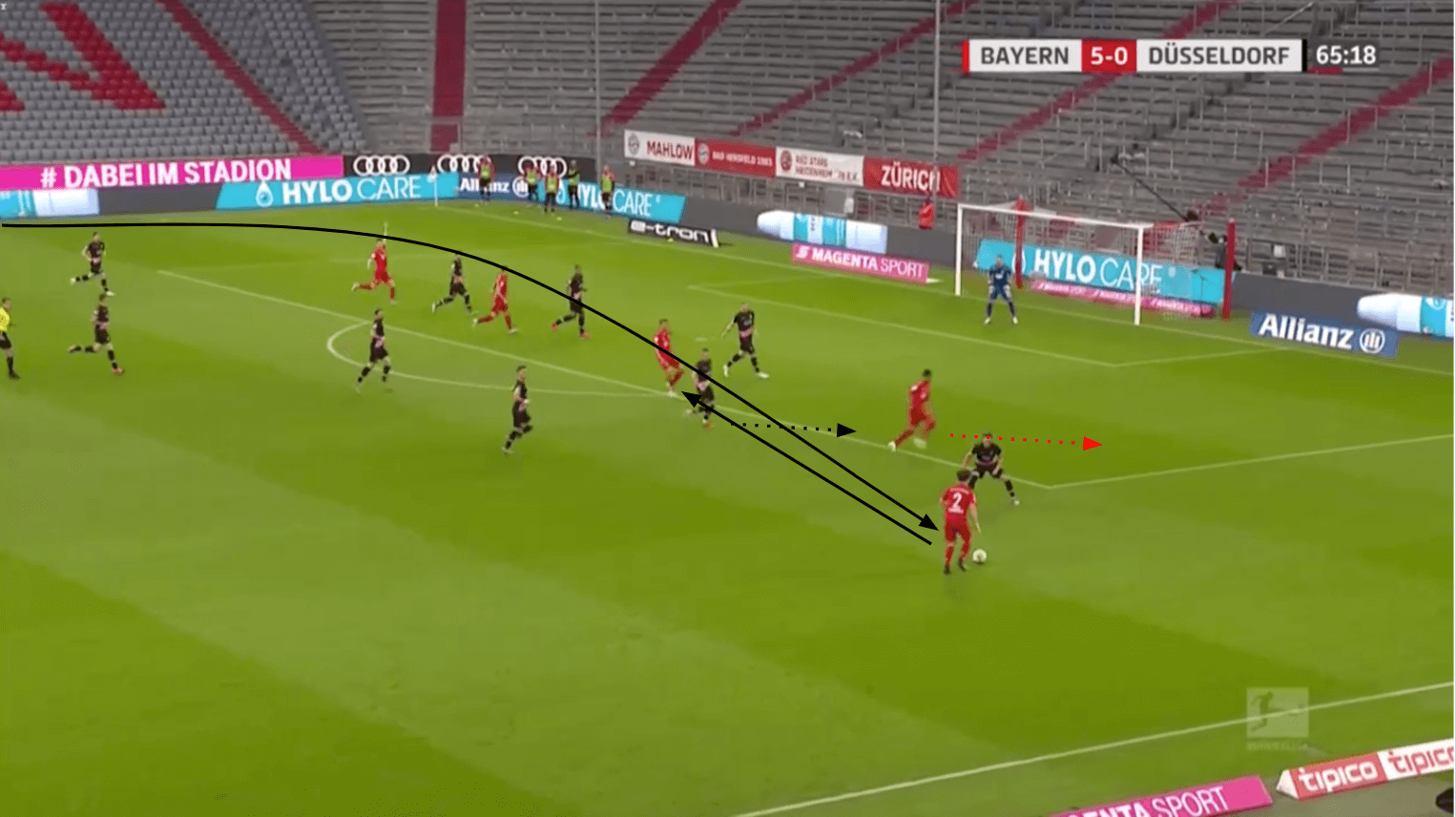 In this moment, Bayern coupled their diagonal pass with some movement and another diagonal ball. Álvaro Odriozola received a long pass from Alaba, with the ball moving from the left half-space to the right flank. Gnabry, mirroring the movement of the ball, made a run towards the corner of the pitch. As he did, he dragged his defender with him. From his position on the flank, Odriozola was able to play another diagonal ball, this time from the flank to the centre of the pitch. Ultimately, the pass was hit too high for Müller to do anything with. However, Bayern’s use of this pass was still effective. By combining these two diagonal balls, Bayern were able to find a man at the top of the penalty area in a short amount of time. This quick, incisive passing was just one of the ways in which Bayern looked to dominate their opponent.

Another area that Bayern looked to exploit, as they consistently have under Flick, is the opponent’s half-space. Bayern looked to place some of their more-skilled players, which admittedly could be any of them at this point, into the half-space to allow them to influence the match. Their first goal against Düsseldorf was a result of them exploiting the half-space and using diagonal balls purposefully. 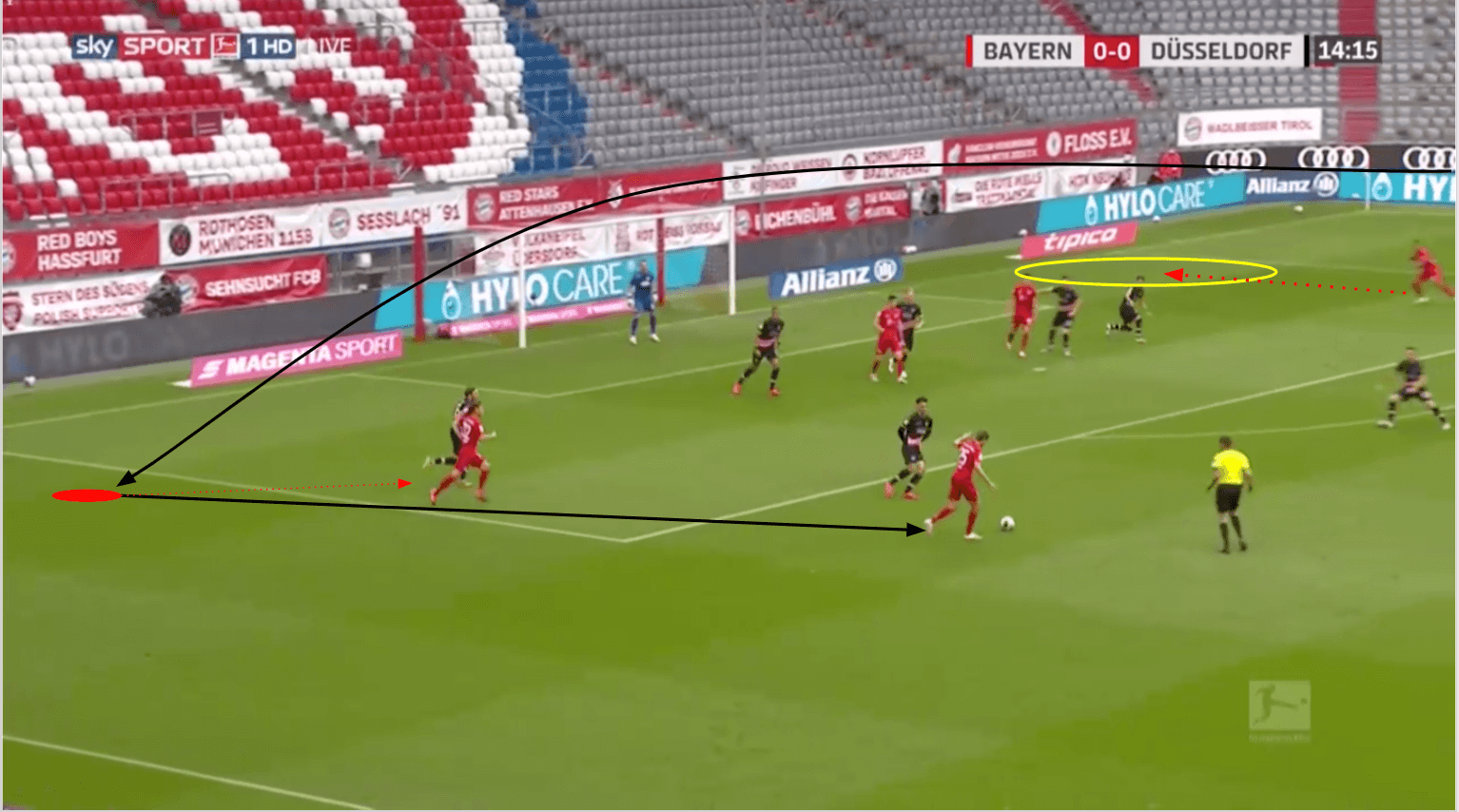 Alaba played a diagonal aerial pass from the right half-space to the left flank to Joshua Kimmich. As Düsseldorf scrambled to mark Kimmich, Müller drifted into the half-space, essentially unopposed. Alfredo Morales applied some pressure as the ball was played to Müller, but Müller was still able to play another diagonal pass to the back post to a surging Gnabry. His first-touch cross was put on target by Benjamin Pavard, and the ball found the back of the net. The original diagonal ball by Alaba allowed Müller to be open in the half-space, and his diagonal pass took advantage of a Düsseldorf defence that was struggling to remain organised. 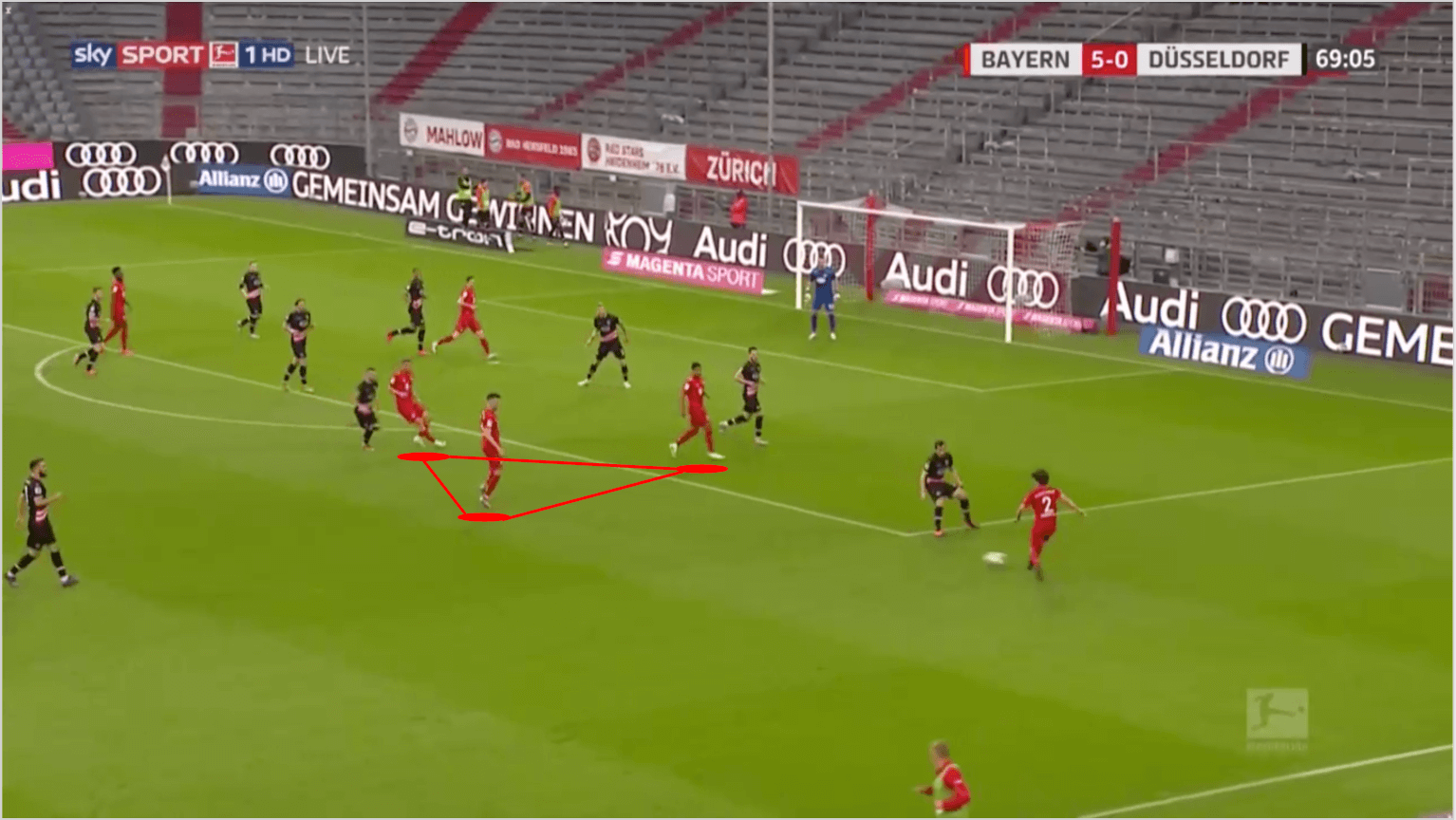 After another diagonal ball into Odriozola’s feet, Bayern had three men occupying the right half-space, forming a triangle in the process. Not only do they create a numerical advantage with this, but they also create a positional advantage due to both their own body shape as well as their position in relation to their opponents. Odriozola tried to play the ball to Ivan Perišić, but the pass went to his front foot, so he was unable to engage his teammates. Bayern maintained possession and kept at least two men in that space while they circulated possession, dragging defenders around in the process. 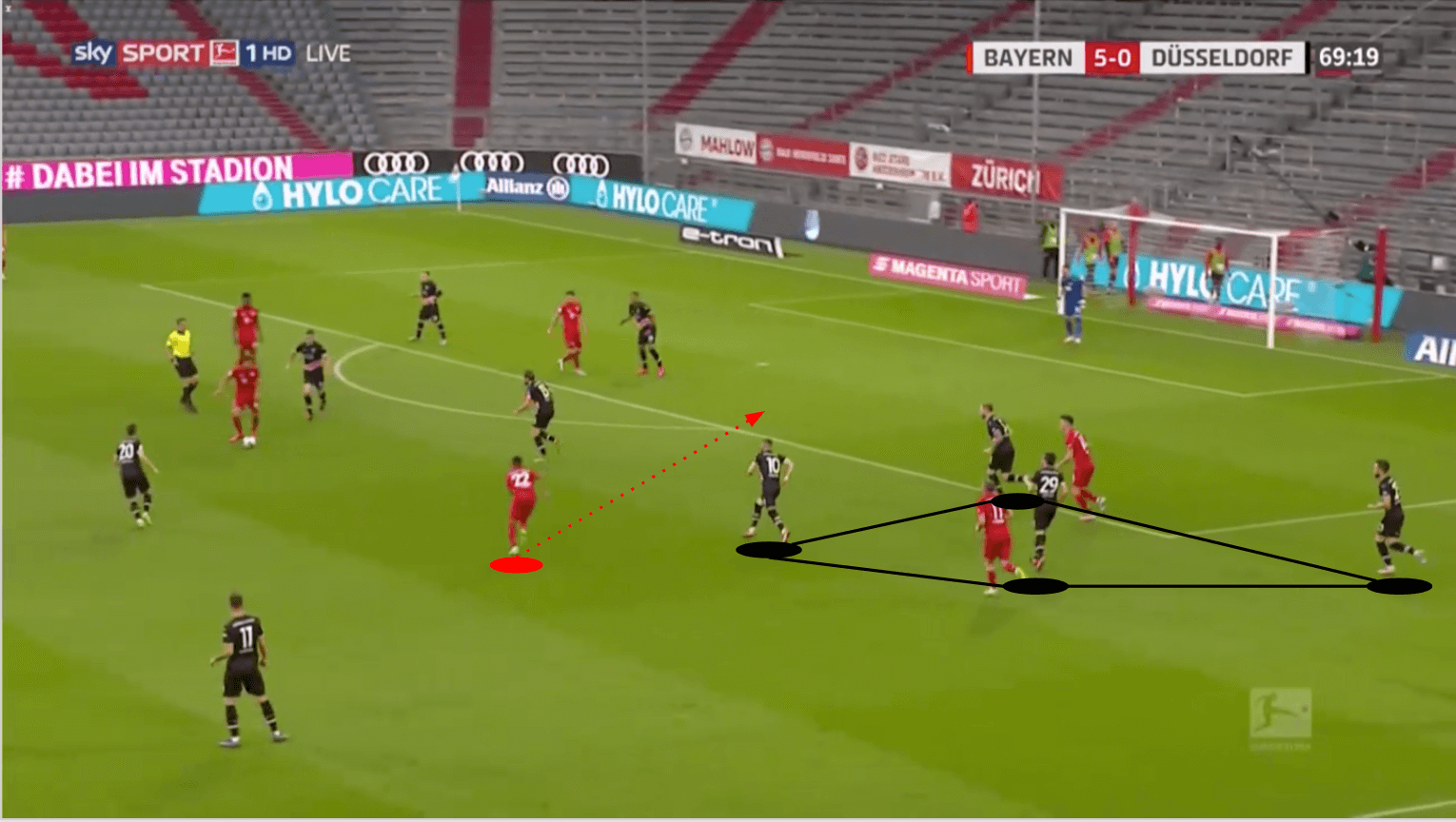 This movement eventually disoriented the Düsseldorf defence, pulling four of them way too far out of position. A quick horizontal pass exposed the large amount of space that was open, and Gnabry made a run into it. While the final pass didn’t set him up for success, Gnabry was still able to attack that central space because of the original pressure Bayern drew in the right half-space. If it weren’t for the initial movement, the final space would not have been created.

Understandably, Düsseldorf likely came into the match knowing they were in for a long afternoon. With themselves near the bottom of the table and Bayern flying high, Düsseldorf’s willingness to stick to their plan for the match was both courageous and intelligent. Düsseldorf continued to build from the back in an attempt to draw Bayern higher up the pitch, and their plan, to some degree, worked. 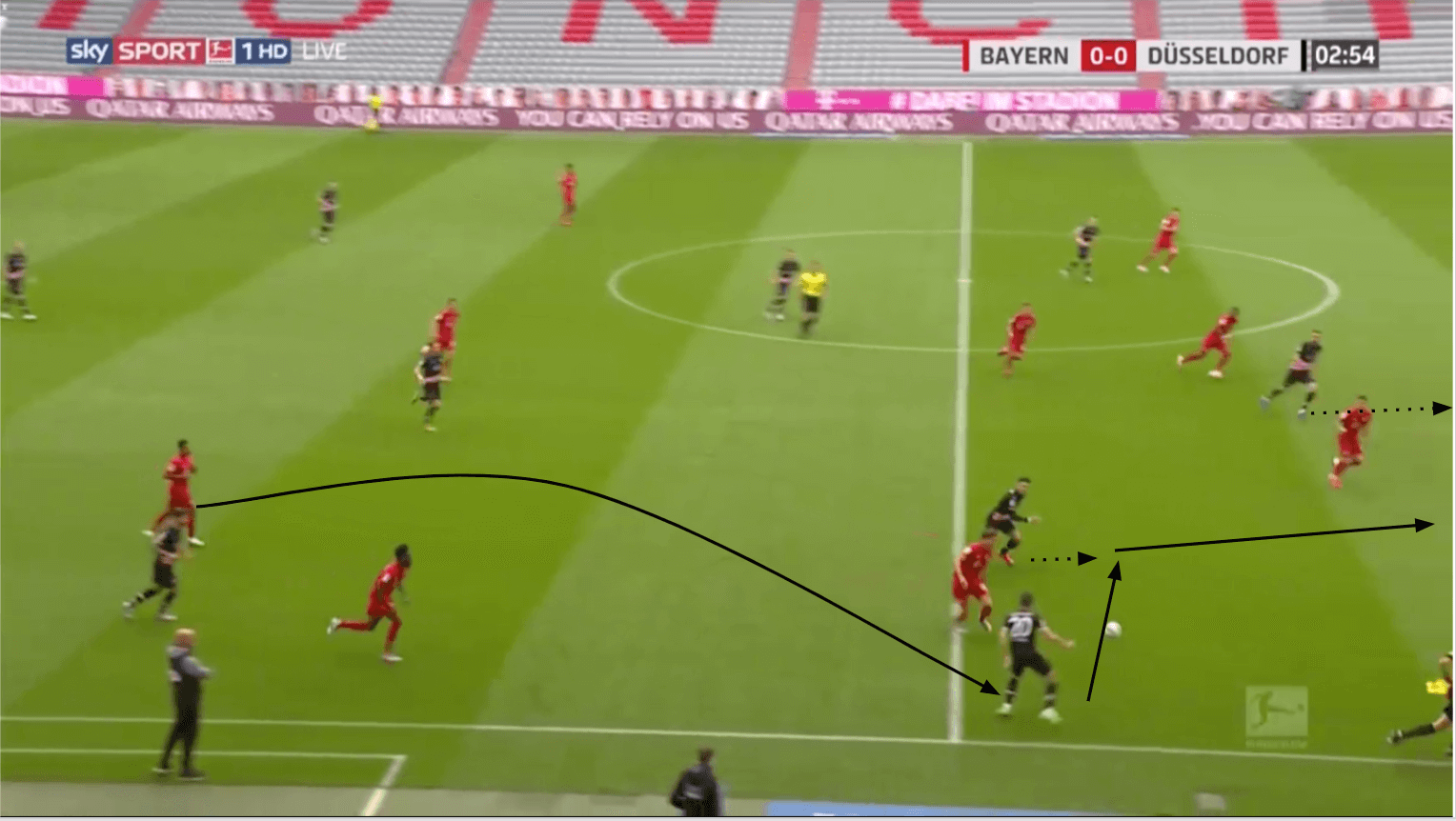 Florian Kastenmeier had the ball in his hands and Düsseldorf took their positions in the build-up. Bayern’s high press was not allowing any short passes, so Kastenmeier was forced to make an aerial pass. The quick series of passes that followed highlighted how to hurt Bayern. Zimmerman was able to play the ball to Skrzybski, whose first touch was to lay it off to Morales. These quick one-touch passes allowed Morales to receive the ball in space with plenty of time, as half of the Bayern team were higher up the pitch. Kenan Karaman made his run in behind Lucas Hernandez, and Morales played the ball through to him in the penalty area. As Bayern defenders rushed into the space, Morales stood at the top of the penalty area. Karaman slotted the ball back to him, but Morales appeared to catch the turf before the ball, and his shot fell safely into Neuer’s hands.

Nonetheless, Düsseldorf’s approach had worked; they were able to get up the pitch quickly and generated a chance because of it. They continued to look for these opportunities throughout the match, and although they were unable to take full advantage of one, the chances were available. When Bayern’s press worked efficiently, eliminating any opportunity of having a successful build-up, Düsseldorf had a plan in place. 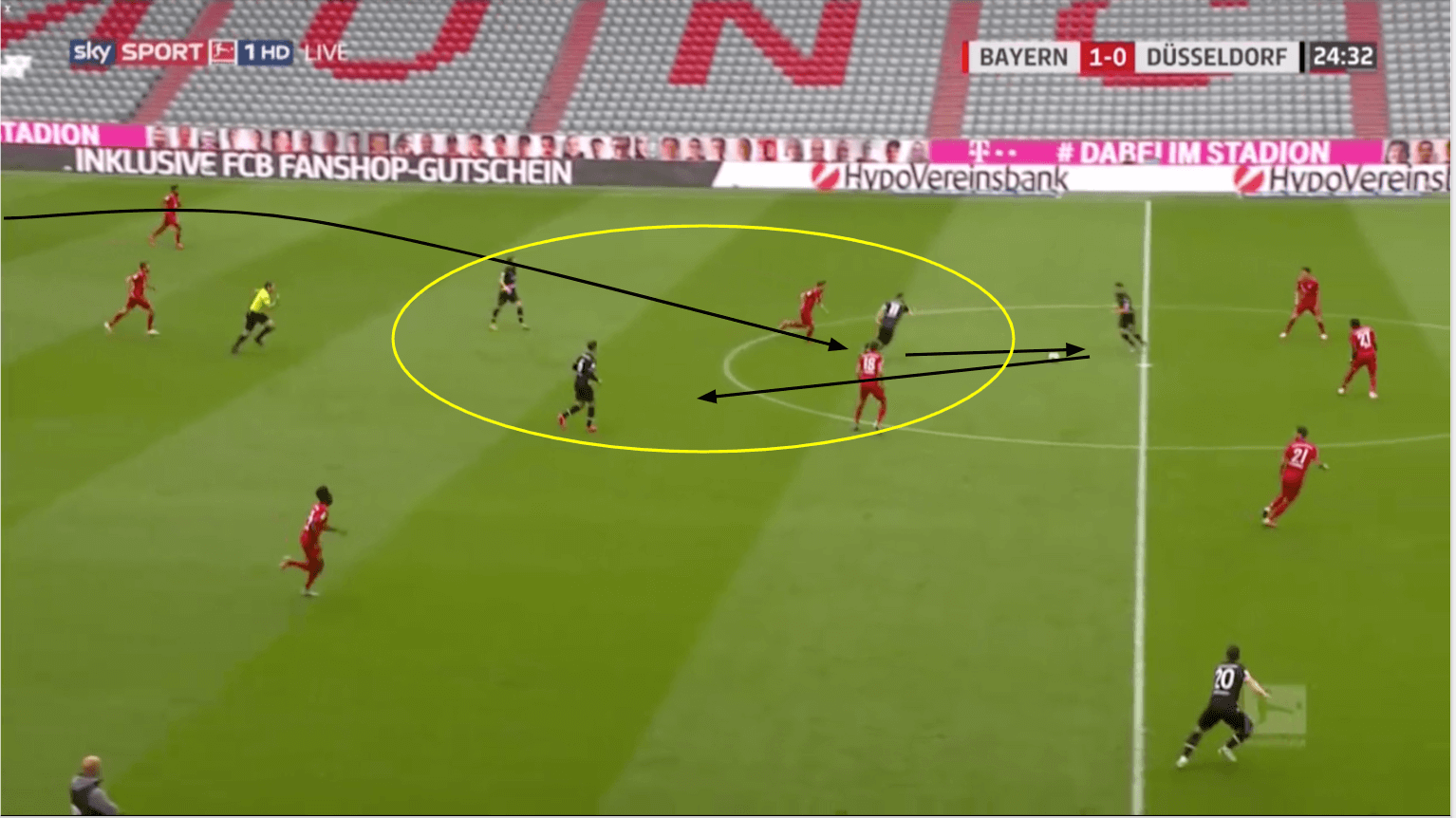 If Kastenmeier was under pressure, he would send the ball towards the centre circle. In that space, Düsseldorf were able to create a numerical advantage for themselves. Their midfielders, who were also involved in the build-up, albeit higher up the field, would be able to outnumber Bayern’s two holding midfielders, Goretzka and Kimmich. Even though Goretzka would be favoured to win a majority of the first balls, Düsseldorf still had the ability to win the second balls and get up the field quickly. Above, Karaman’s first touch found Thommy, who laid the ball off to Morales. Within a second and a half, Düsseldorf was dribbling at the Bayern defence. Ultimately, Bayern’s defence held strong and didn’t concede, but Düsseldorf were certainly able to highlight a small weakness in Bayern’s game.

For better or worse, Düsseldorf’s commitment to inviting Bayern’s pressure higher up the pitch occurred throughout the entire match. In fact, Bayern’s fourth goal came as a direct result of Düsseldorf’s invitation. As they were trying to progress up the pitch, a misplaced Düsseldorf pass allowed Bayern to attack down the centre of the pitch. This loss of possession, coupled with Düsseldorf’s suspect defending, ultimately led to a Gnabry cross and a neat Lewandowski heel flick to finish off the move.

Hani Flick’s side took another step towards their eight consecutive Bundesliga title with their win over Düsseldorf. While Bayern still have two tough matches coming up, first against Bayer Leverkusen then Borussia Mönchengladbach, the consistency with which they apply their game plan means that they’re very unlikely to drop too many points in the future. The Bavarian club are hoping their form continues later into the summer when they hope to continue their impressive UEFA Champions League form.

Düsseldorf currently sit in the relegation play-off spot. While they certainly have the ability to avoid relegation, they have a couple of tough matches coming up against Hoffenheim, Dortmund and Leipzig. Luckily for the club, their last two matches are against teams much lower in the table, but they’ll be looking to at least earn a few points against those teams from the top half of the table.