Traditionally, the Bundesliga champion starts the new season with an opening game at home. Thus, on Friday, Bayern welcomed Hertha at the Allianz Arena to start the new Bundesliga season. It was an intense game that ended in a 2-2 draw.

This tactical analysis will examine the tactics used by both Niko Kovač and Ante Čović and explain the reasons for this draw.

Both teams did not surprise at all. Bayern used a 4-3-3 in every game in pre-season, so it was expected that they would use this as well in this game. With Leon Goretzka facing a minor injury, it was clear that Thomas Müller and Corentin Tolisso would play in midfield, even though this might not be an optimal position for Müller. It was somewhat unexpected that Benjamin Pavard would start instead of Jérôme Boateng though.

Čović decided to start in a 3-4-1-2 system, which he would change early on in the first half to a 4-2-3-1, as we will further analyse alter on. The debut of the new signing Dodi Lukebakio was highly anticipated, and he delivered scoring a goal in the 35th minute.

Bayern’s strong wingers and Hertha’s reaction to them

Serge Gnabry and Kingsley Coman are two of Bayern’s greatest weapons right now. The two wingers play an important role in Bayern’s system, which is based on the Robben and Ribéry era. Since many years, Bayern try to bring their wingers into one-on-one situations, where they can use their speed to beat the defender. 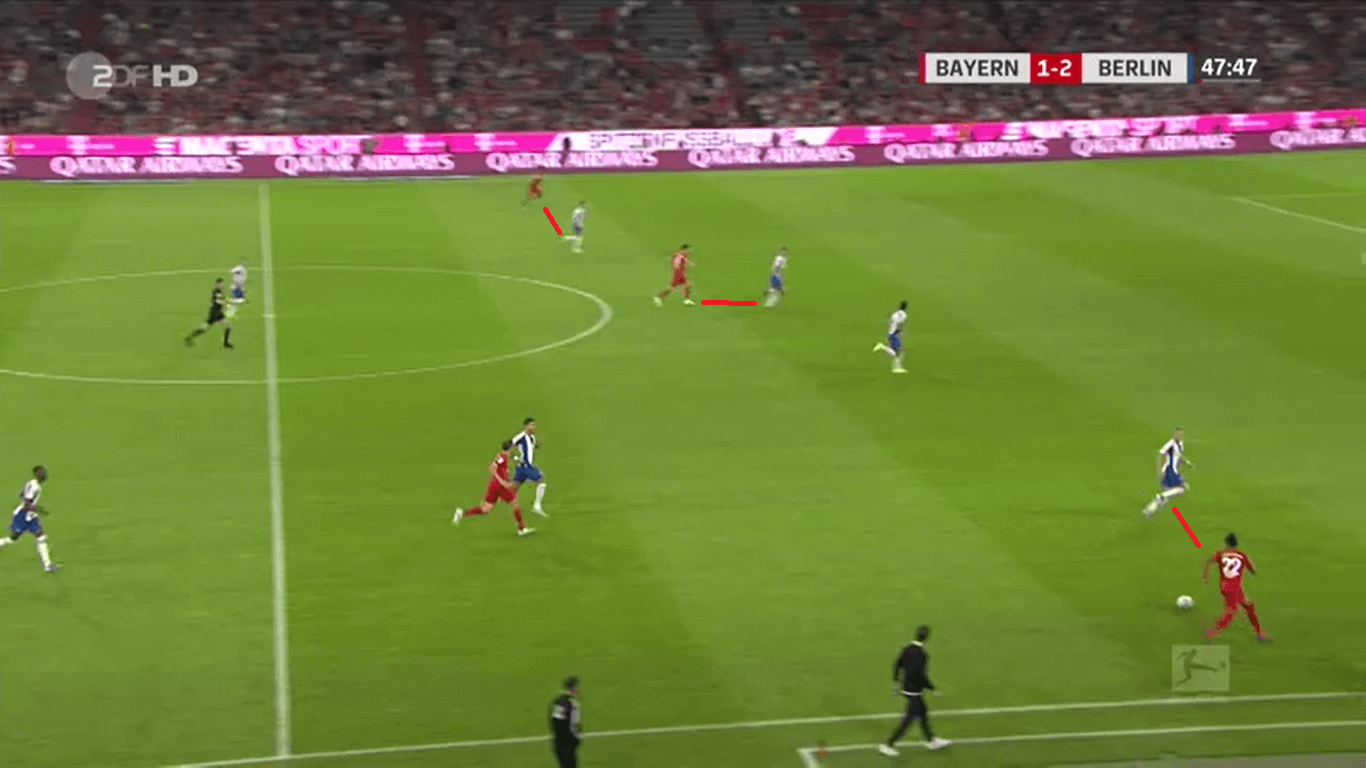 Here, we see one example of such a situation. Gnabry receives the ball on the right wing and has a one-on-one situation. Overall, Bayern have a 3v4 situation, which is not that bad. However, the positioning is not optimal, because Lewandowski does not pin the left centre-back. Therefore, if Gnabry beats the left-back, the left centre-back may be able to move out and attack Gnabry further. 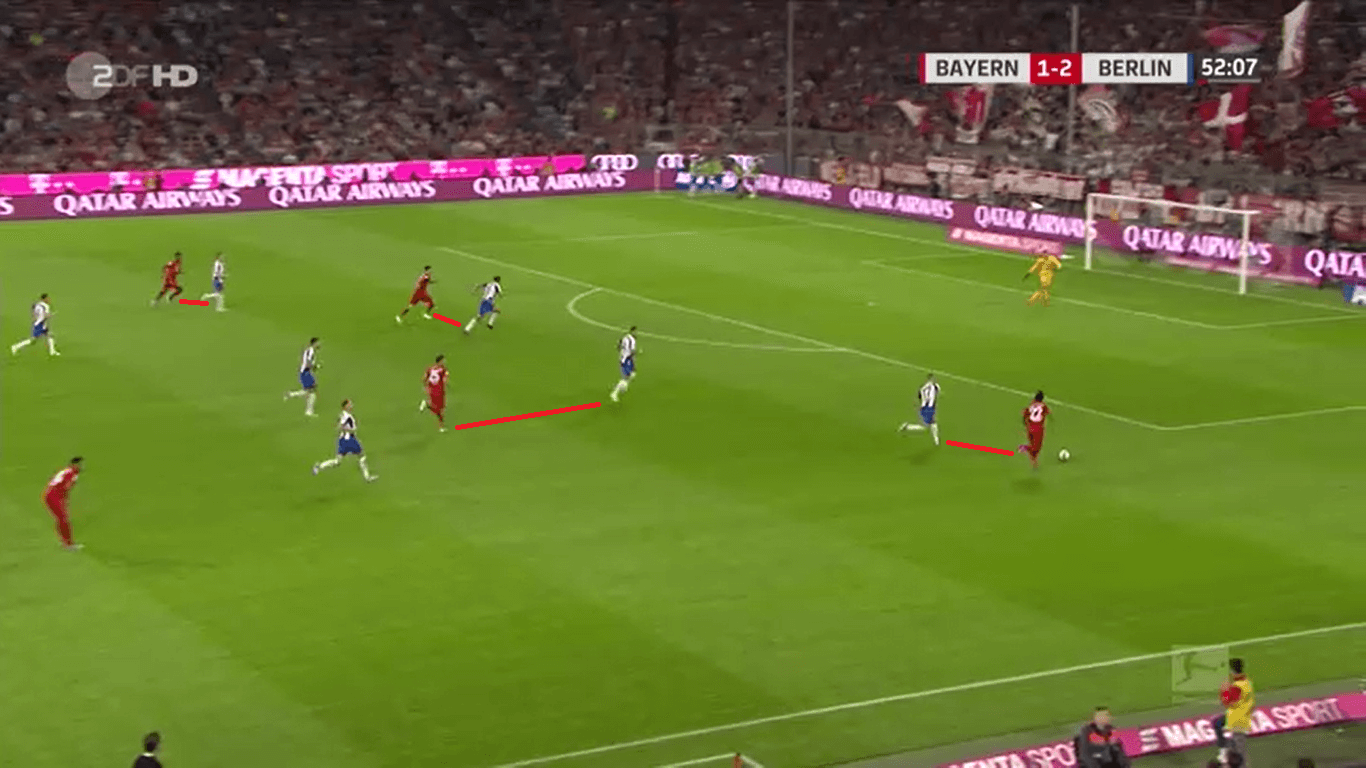 A few minutes later, this is done much better, as now Müller joins the attack, so the left-centre-back has to keep an eye on him as well. Therefore, it is much more difficult for the defender to support his colleague and the probability of keeping the one-on-one alive as long as possible is rather high.

In order to prevent these situations, Hertha tried to use a 3-4-1-2 formation, which would transform into a back-five defensively. In theory, this should help to defend the whole width of the field and move out to attack the winger with two defenders. 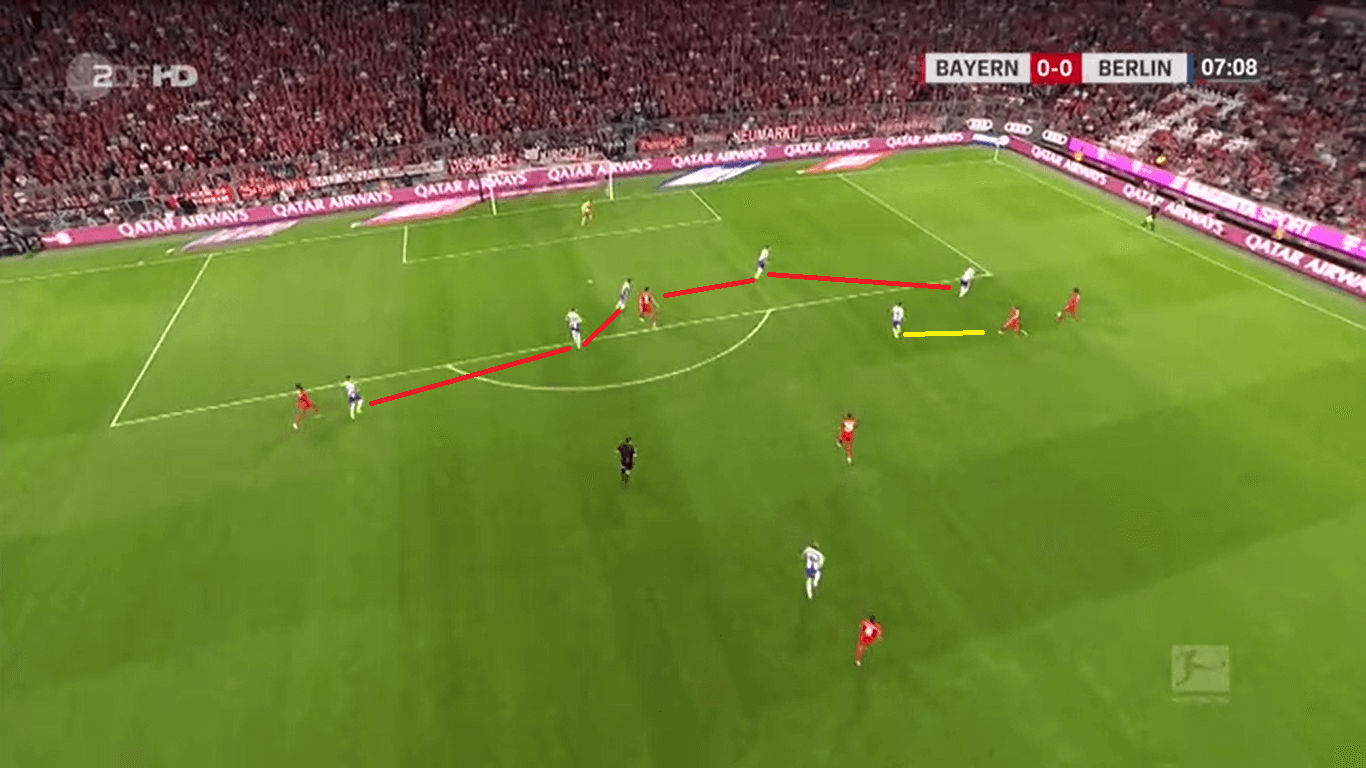 The image above shows an example of Hertha’s back-five trying to defend a Bayern attack. While Gnabry faces the left-wingback Maximilian Mittelstädt, left-centre-back Karim Rekik covers the space behind his wingback is ready to oppose Gnabry if he breaks through. In the centre, two defenders are near Robert Lewandowski, so Hertha have numerical superiority there as well. Joshua Kimmich, who supports Gnabry on the wing, is also tightly marked. However, we see that Corentin Tolisso is wide open in a central position 20 meters away from the target. Positioning so many players in the back-line results in Hertha lacking coverage in the defensive midfield area.

As a result, Čović withdrew that idea and decided to change to a 4-2-3-1. This resulted in increased vertical compactness. 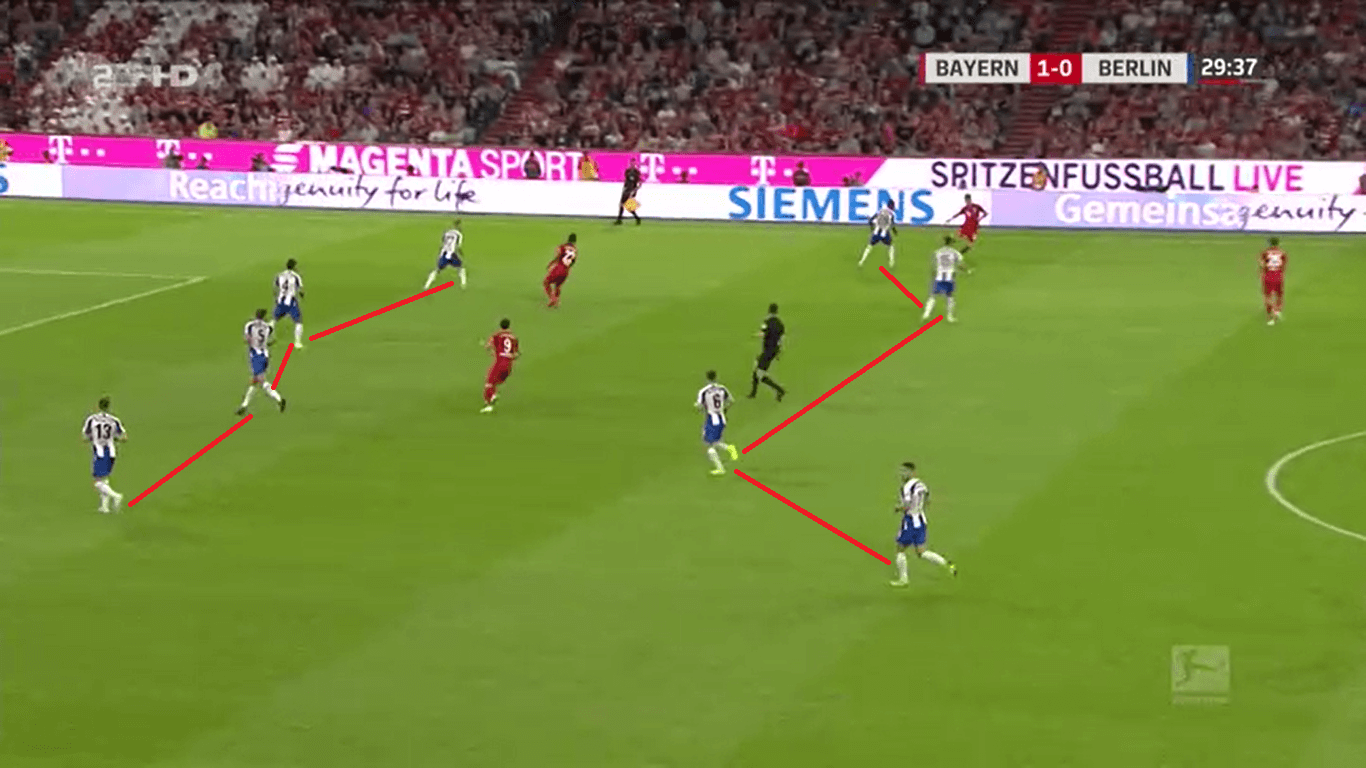 An example can be seen here, where Hertha built two defensive lines consisting of four players. This helped them gain more access to the central midfielders and disturb them. There was still a lot of space between the lines though, which Gnabry and Lewandowski occupy in this situation. Bayern were not able to take advantage of this though.

Bayern were much more focussed on playing vertically to their wingers, so they tried that on nearly every occasion that was presented to them. It is no surprise then that the opening goal was scored from such a situation with Gnabry running through the right-wing and crossing to Lewandowski, who was able to finish.

In the later stages of the game, Kovač also tried to invert right-back Joshua Kimmich. The reason for this was that Bayern’s game was extremely wide because of the positioning of the wingers, which resulted in less compactness in the centre when losing the ball. When Kimmich attacked through the half-space or even the centre, the ball circulation, as well as the counterpress, were improved. 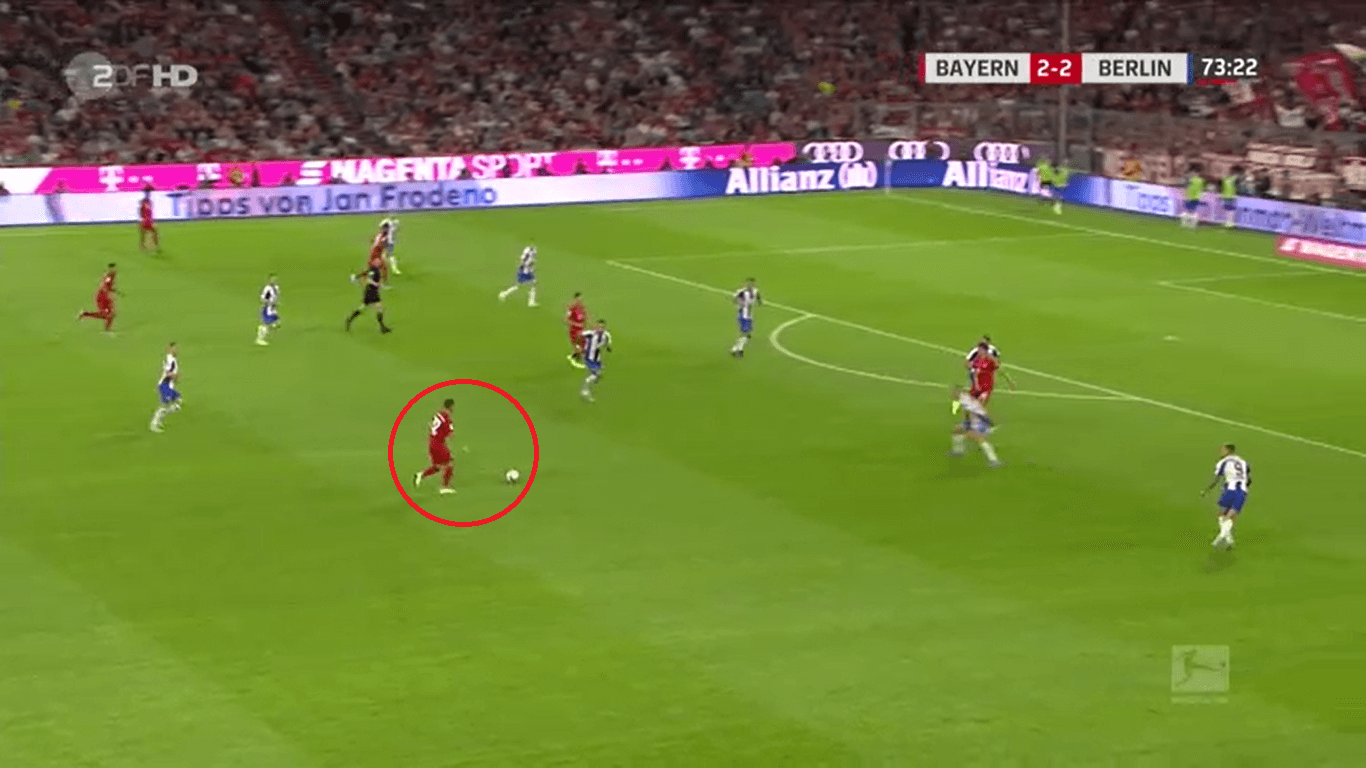 Also, as can be seen in the image above, Hertha seemed perplexed by this move and did not know how to react to this movement. Therefore, Kimmich had a lot of open space and time to make a decision.

Despite being the underdog, Hertha tried to play proactively and attack Bayern. When Bayern were in possession of the ball, Hertha used a high press to put pressure on Bayern. 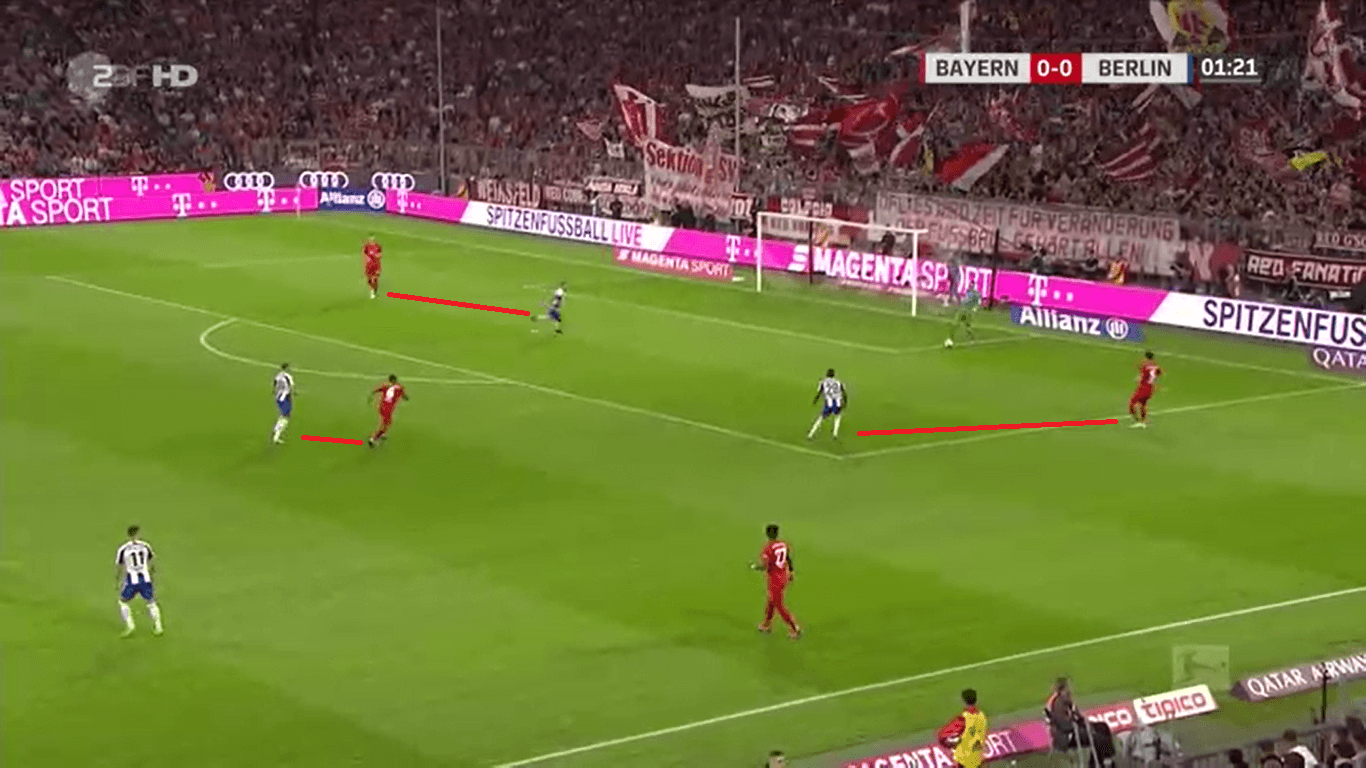 Here, we see such a situation. Neuer has the ball, but there is no passing option because Hertha is able to mark every player tightly and close passing lanes. Especially Thiago in the centre of the image is mark extra-tightly, since he has, without doubt, Bayern’s most important player in the build-up. Not letting Thiago into the game was for sure one of the main ideas for Hertha.

When Hertha had the ball themselves, they would also be aggressive and directly search for ways to finish off the attack immediately. Especially the movement between the lines was great. 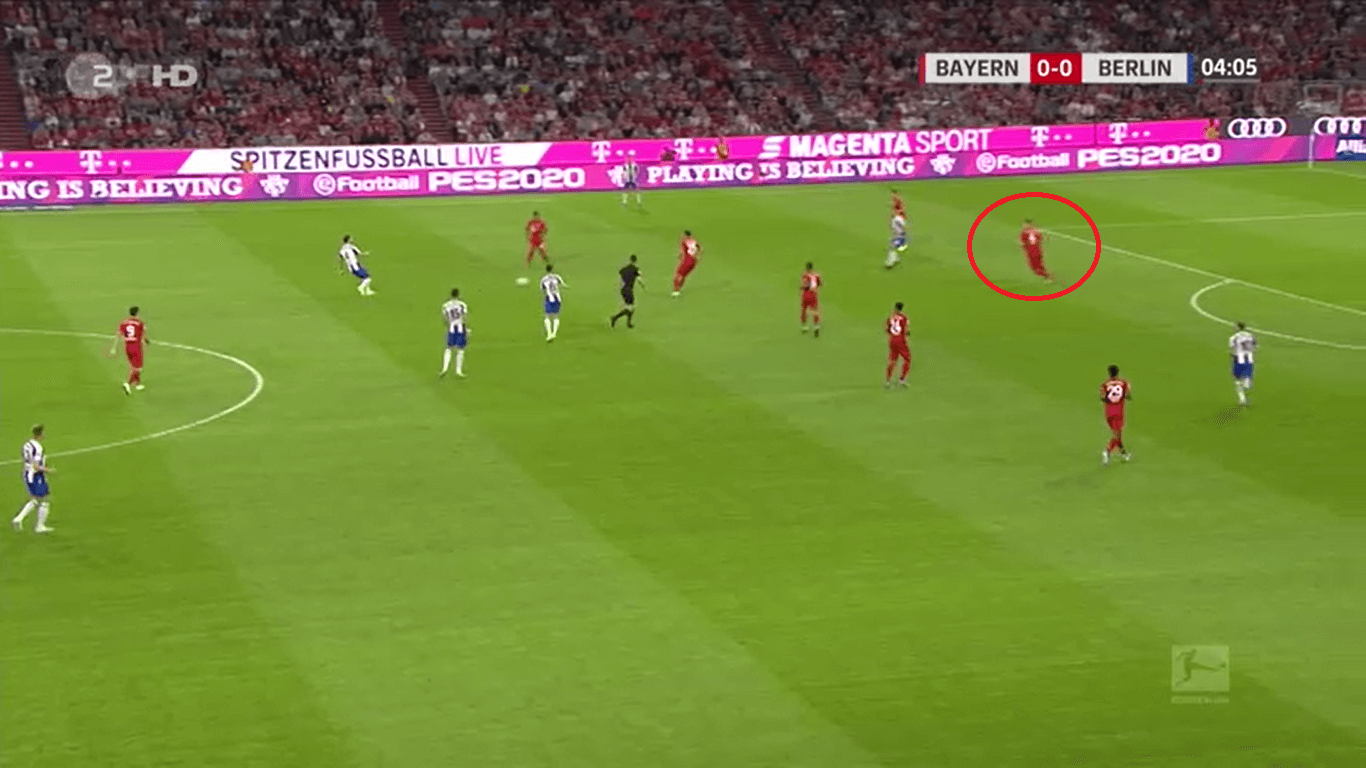 Here, Rekik plays a great vertical ball into the space between the lines, finding striker Vedad Ibišević. From Bayern’s point of view, the five-man midfield line is overplayed with one single pass, which is a disaster. The lack of staggering in the midfield line obviously results in such a weak defence, even though they have enough players near the ball. However, centre-back Niklas Süle moves out to close the space between the lines and not let Ibišević turn. This is an approach we have also seen a lot in the pre-season, where Bayern’s centre-backs often moved forward to defend such situations. 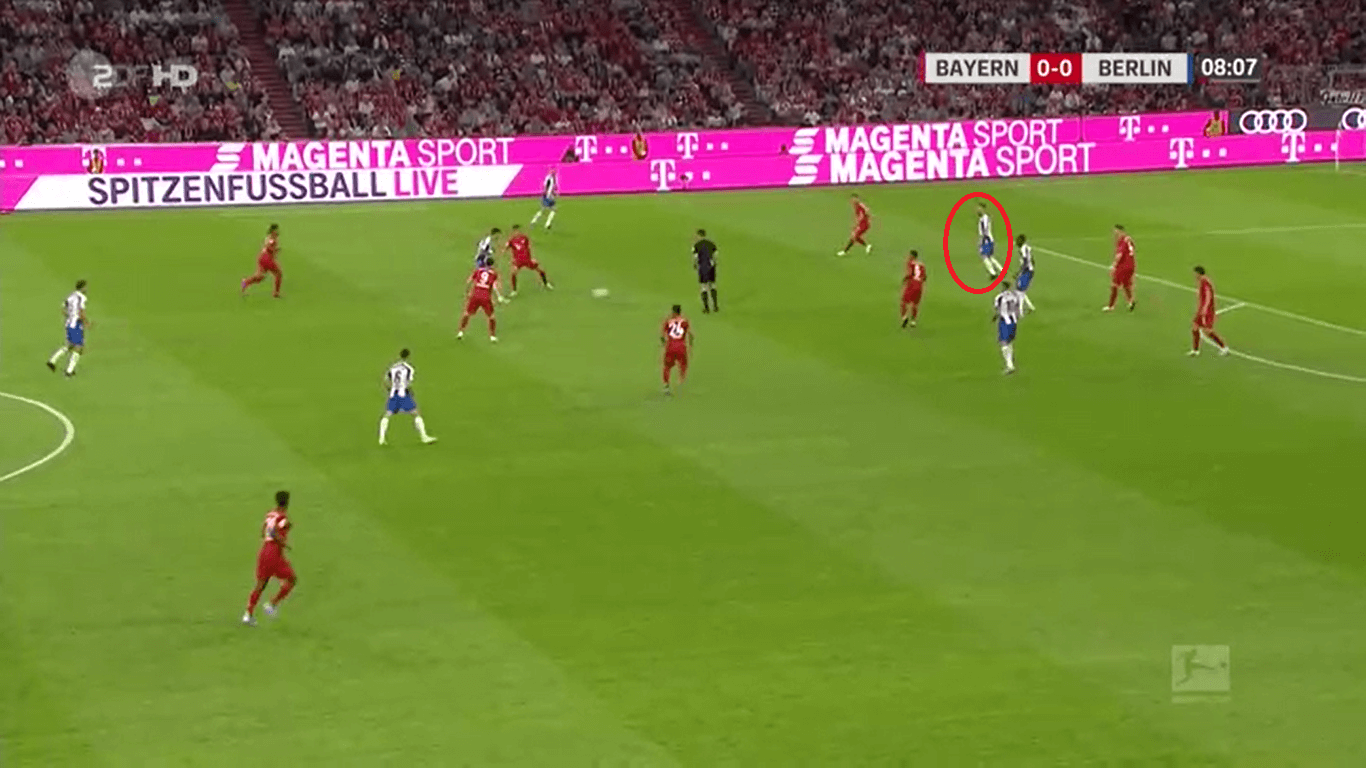 However, there were also situations where these kinds of vertical passes were played near the own box. Here, it is not about moving out or not, but rather the gap between centre-back and full-back which is too big. Hertha were great in exploiting this but failed to convert this into goals.

They scored both their goals taking advantage of poor defence by the midfielders though. The first goal came from a longshot by Lukebakio. The image below shows the position. 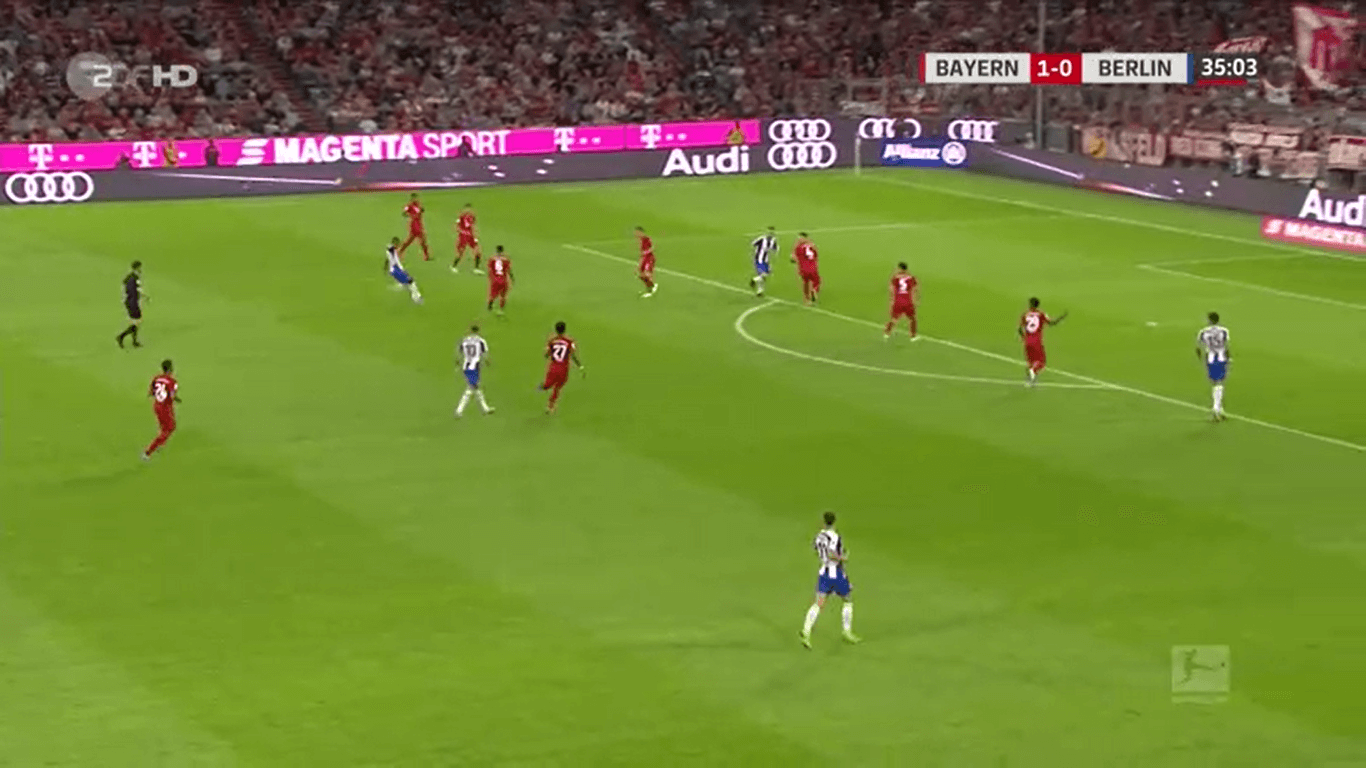 Lukebakio has the ball more or less 25 meters away from the target. There are three players around him, Thiago being the nearest. But no one attacks him properly and puts pressure on Lukebakio, so he just shoots and scores.

The 2-1 lead results from a second-ball that lands in an area where a defensive midfielder of Bayern must be present. 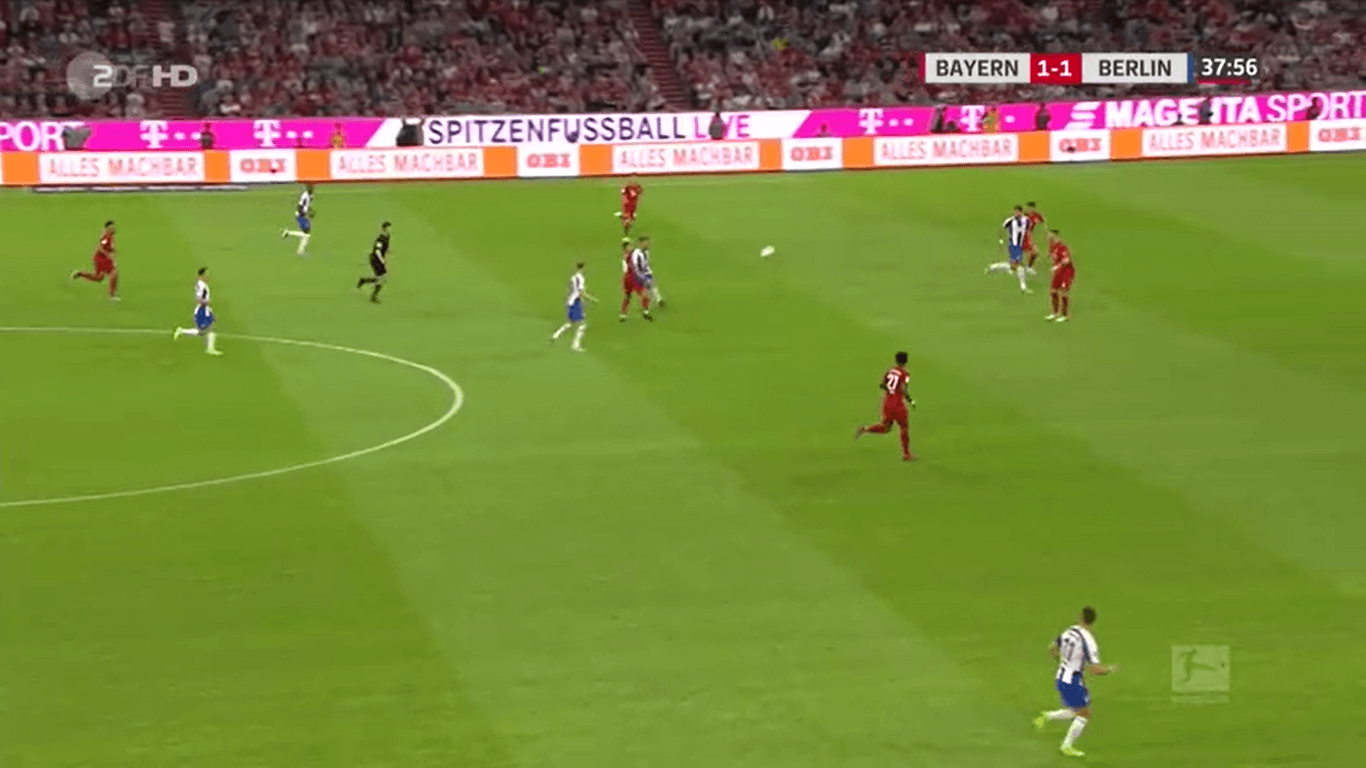 With the back-line staying high, a simple pass into the open space is enough to Marko Grujic one-on-one against goalkeeper Manuel Neuer.

Apart from that, we also saw Hertha being aggressive in the build-up, meaning that they directly looked for ways to advance the ball quickly. 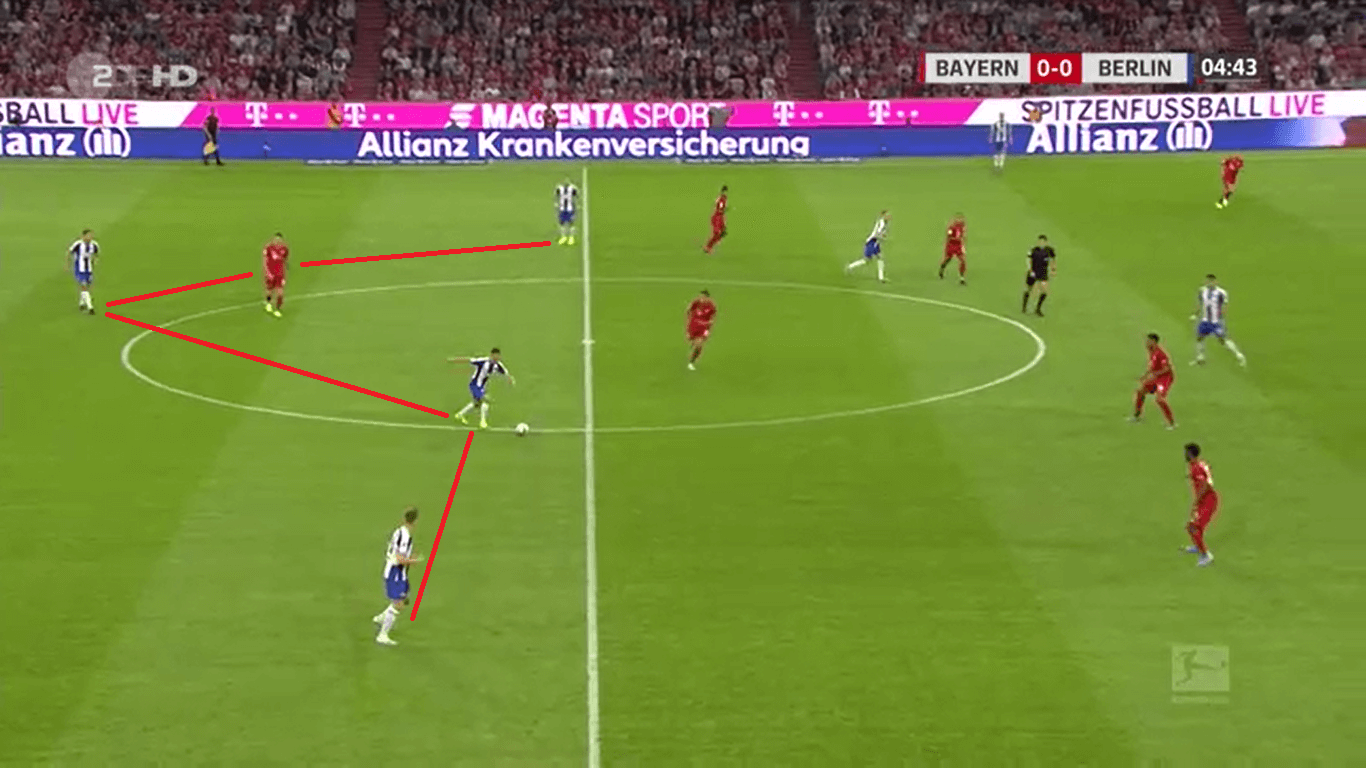 Even though this structure does appear odd, the aggressive dribble forces Müller to move out and create a gap in Bayern’s midfield line. Once again the vertical pass into the open space is possible.

From a tactical standpoint, Bayern vs Hertha was a worthy opening game for the upcoming Bundesliga season. As we saw in our analysis, both teams had interesting approaches as well as in-game adjustments. Hertha’s change from a back-three/ back-five to a back-four was a good decision, as they were then able to get better access to their opponent. Bayern’s main weakness was the staggering of their midfield and the poor defensive contribution of the central midfielders, which caused both goals they conceded. Hertha, on the other hand, did a good job against the reigning champion and takes home a fully-deserved point home. For Bayern’s title ambitions, this one point at home is for sure too little. Nonetheless, it has to be stated that Bayern are not where they want to be yet. The recent signings of Philippe Coutinho, Ivan Perišić and Mickaël Cuisance will change the face of the team and maybe also their tactical approach in the upcoming games. Therefore, this game may not be representative of their performance level this season.