La Liga returned in all its fashion and what a curtain-raiser we got at San Mamés last Friday evening. Athletic Bilbao hosted the reigning champions Barcelona and served them a cold shower courtesy of their jubilant 38-year-old, Aritz Aduriz.

It has been a whole decade since the Catalans last lost their opening game in the Spanish top-flight and this one is bound to sting. This tactical analysis will dissect the game and tell you just what tactics won Athletic Bilbao the game and how Ernesto Valverde’s troops failed to make a good impression on day one of the competition.

Unai Simón started in-between the sticks for Athletic Bilbao with a young duo of Yeray Álvarez and Unai Nunez. Íñigo Martínez was the one missing from the backline as he is still out injured. Ander Capa and Yuri Berchiche manned the flanks while we saw a midfield duo of Dani Garcia and Unai López just in front of the defensive line.

Moving upward, a right-back turned winger, Oscar de Marcos, was deployed on the right since Ibai Gomez is still sidelined. Opposite of him was Iker Muníain. Finally, Raúl García and Iñaki Williams formed the tip of Athletic Bilbao’s attack.

On the other side of the pitch, Barcelona also fielded a well-known squad with simple tweaks to their tactics. Marc-André ter Stegen was in goal with a quartet of Nélson Semedo, Gerard Piqué, Clément Lenglet and Jordi Alba in front of him. Sergi Roberto was promoted to a midfielder alongside the newcomer Frenkie de Jong and the young Carles Aleñá.

The obvious omissions here were Sergio Busquets and Ivan Rakitić while Lionel Messi was definitely the biggest loss for Barcelona since the Argentine is still recovering from his injury.

Up front, Ousmane Dembélé and Antoine Griezmann were the wide men with Luis Suárez in his usual position as the team’s number nine.

Ernesto Valverde opted for a 4-3-3 system that made certain transitions throughout the game and looked like 4-1-4-1 at some points during the match. 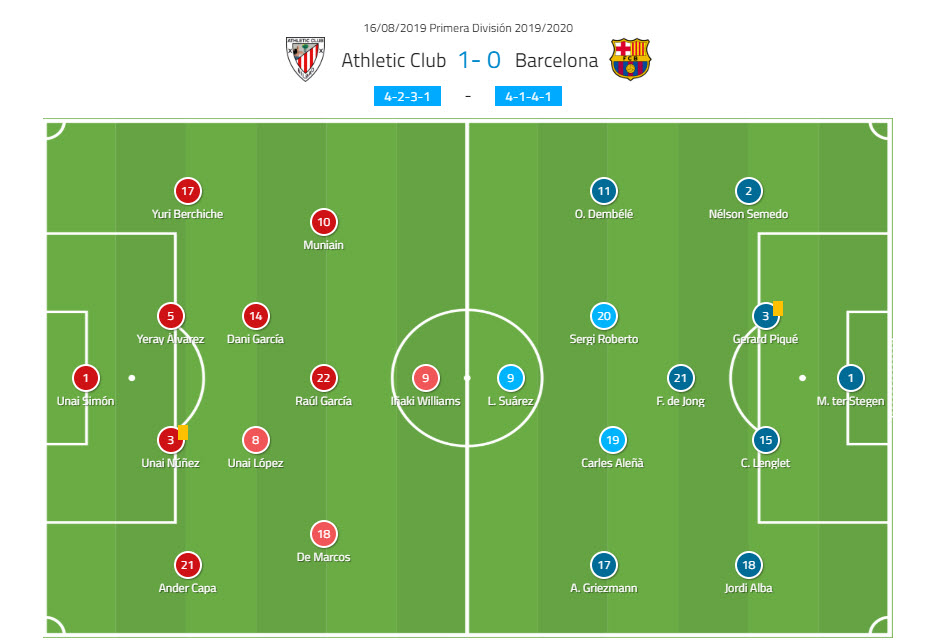 On Friday, we saw two teams out on the pitch but only one with a clear plan in mind. Athletic Bilbao did their own analysis and knew what tactics to deploy to neutralise Barcelona right from the back. It’s not really a surprise that teams decide to stay compact and turtle up against the Catalans but Garitano did it extremely efficiently.

He knew Barcelona would deploy a high defensive line, push their centre-backs forward and then search for a link to get the ball from the first and into the final third. That link is usually Busquets as the team’s only pivot and now, the responsibility fell to De Jong’s shoulders.

It’s not that the young Dutchman didn’t do well but it was more the way Athletic Bilbao managed to nullify his presence. With that in mind, the hosts planned to close down all and any passing lanes through the middle of the pitch, practically marking Barcelona’s midfield and especially De Jong, out of the game.

Notice in the image above how there’s no way the Catalans progress the ball through the middle of the pitch since all of their midfielders are well covered and unavailable. This effectively does two things: Nullifies Barcelona’s most creative outlets in their midfield trident and also forces them to go wide.

While it did seem like Athletic Bilbao were shooting their own foot with such a narrow shape, which can be seen below, it was all a part of the plan. Forcing Barcelona wide and then covering their central cutback options means that they either clean up any attempts into the box or Valverde’s men resort to the aimless crossing with no real target-men in the area.

Barcelona had 11 crosses on the night with only three being accurate along with eight corners with the same results but none actually causing any threats to the home team. But Athletic Bilbao knew what they were doing.

Their five counter-attacks yielded them two shots as they managed a total of 44 interceptions, almost double Barcelona’s figures. When we add the Catalans’ 96 losses to that tally, it becomes clearer what exactly the Basques were planning right from the bat.

As soon as Barcelona lose the ball, Capa and Berchiche would bombard forward with pace alongside Williams and Barcelona’s relatively slow centre-backs would find themselves isolated in a foot race against players with blistering speed.

The Catalans were lucky not to concede in the first half and it was obvious changes needed to be made come the second part of the game. During the first 45 minutes, Athletic Bilbao were so compact and defensively solid that Barcelona managed only one single key pass. And with Luis Suárez out with an injury, Valverde needed to get creative.

By half-time, Barcelona already threw two substitutions onto the pitch: Rafinha replaced the injured Suárez and Rakitić came on instead of Aleñá. This indeed did fix some of the problems the Catalans were facing.

The problem in the first half was that all the options for the Blaugrana were cut off with their only link in De Jong being marked out of the game. Barcelona had no ways of fueling the build-up and advancing up the pitch. Both Rakitić and Rafinha solved this problem.

Rakitić would drop deeper when needed to form a double pivot with the Dutchman, thus offering his centre-backs two passing options to choose from and the Athletic Bilbao pressing squad a much more difficult job of covering all the channels.

Suddenly, Barcelona had more outlets to advance up the pitch. If Bilbao’s high-pressing squad followed the double pivot exclusively like you can see in the image above, then the flanks would get free and the Catalans could push them forward with ease.

If they, however, decided to spread the workload and cover both the flanks, that would leave them short-staffed to cover the pivots effectively. Finally, Barcelona could build from the back like they originally imagined.

Rafinha, on the other hand, solved the problem of getting the ball into the final third once it started rolling around the middle of the pitch. Notice how that worked out for Barcelona in the example below.

Rafinha drops deeper and drags his marker with him, not only freeing the whole flank for Semedo to burst into once he got the ball but also creating a pocket of space for Griezmann to slot into, as we’ve have expected him to do.

This eased Barcelona’s transition into the final third since Rafinha was extremely mobile and provided a breath of fresh air for the Catalans. With those changes on the pitch, the away team controlled the proceedings and managed to successfully pin Athletic Bilbao down.

But while their build-up and transition vulnerability was solved with more hard-working substitutes, their lethality was still very much a problem. Bilbao hand’t changed their approach at all: they were still compact and in a low-to-mid block and a narrow shape, focusing primarily on shutting down the centre-forward and the wingers who would cut inside.

The best proof of the fact they absolutely succeeded in their goal is perhaps the touch-map of Barcelona’s forwards including Griezmann, Suárez, Dembélé and Rafinha who shifted into a number 10 role come the latter stages of the second half.

Notice how most of the touches were made in deeper positions and almost exclusively on the flanks, meaning that zone 14 was extremely well guarded and they just couldn’t get the ball in the danger areas.

They continued their tactics of interchanging between high-pressure and shutting down the middle channels with a compact mid-block.

Of course, we cannot finish this tactical analysis without mentioning the youthful hero of San Mamés, the 38-year-old Aduriz who ended up being the bane of Barcelona (again). And despite that being an incredibly sublime finish and possibly a contender for the goal of the season already, it was a follow up to a nice tactical play.

Athletic Bilbao won a thrown-in in the opposition’s half and in three touches they managed to bypass the entirety of Barcelona’s defence. Notice how the Catalans’ defenders are pulled away from their shape while following the Basque forwards, which leaves a pocket of free space behind them.

Capa then quickly slots into that space after an excellent one-two and proceeds to cross the ball into the box. The finish and the rest, as they say, is history.

Aduriz was only on the pitch for three minutes and managed to score after just two touches of the ball. One shot, one duel won, one goal and three points. And now, he has scored in 15 straight La Liga seasons joining Lionel Messi as the only other player to manage this monumental achievement.

All of that at the tender age of just 38.

Even though Barcelona’s second-half changes put them back in the driver’s seat, they still couldn’t create enough chances to put Athletic Bilbao in any sort of real danger at all. Garitano did his analysis and homework quite well and neutralised Barcelona’s tactics entirely.

Of course, we have to take into account Valverde’s decision on a mostly experimental midfield trident, the absence of Messi and the extremely difficult pitch and atmosphere of San Mamés.

But when all is said and done, Valverde will have to go back to the blackboard and do some analysis of his own while Garitano can celebrate a well-deserved victory on the opening day of La Liga.