Argentina’s 3-0 win over Italy showcased what many had already begun to realise. Under Lionel Scaloni, Argentina have been one of the best national teams in the world. For decades, despite having one of the best players of all time, La Albiceleste struggled to win major trophies. For over a decade, managers struggled to build a successful team and get the best out of Lionel Messi. That was, of course, until Scaloni took over after the 2018 World Cup. The 44-year-old manager initially took over on a temporary basis, without any expectations. His only previous managerial experience had been with the U20 national team, during which he only managed five matches.

After a rather inconsistent first year, Scaloni hit the jackpot. Since Argentina’s loss to Brazil in the 2019 Copa America, La Albiceleste have not lost a single match in three years. Scaloni has found the perfect recipe, playing entertaining collective football while still getting the best out of Messi. The beauty of this Argentina side lies in its simplicity. Scaloni has built a system that appreciates and enhances each individual’s quality while still ensuring collective success. He has adapted the tactics to the talent at his disposal, both in a structural and behavioural sense.

In this tactical analysis, Argentina’s playing style under Lionel Scaloni will be identified by examining their tactics in and out of possession. Furthermore, we will look at how this system has gotten the best out of Messi, finally allowing him to perform up to his ability for the national team.

Over the last calendar year, Scaloni has used many different formations. According to Wyscout, he has deployed a 4-4-2, 4-3-3, 4-2-3-1, 4-1-4-1, and 4-1-3-2. The formation is highly dependent on the players selected, as depending on their individual characteristics, the initial distribution of players will vary. However, regardless of the formations, the overall behaviour and structure of the team are very consistent.

This Argentine generation has a significant lack of wingers, with PSG winger Ángel Di María and Sevilla star Lucas Ocampos being one of the only true wingers in the national pool. As a result, Scaloni has adopted a very narrow structure. This structure heavily complements their style of possession as we will see later in this analysis. In this system, the fullbacks are very important. They have very attacking roles and are responsible for providing width in possession. Without any wingers ahead of them, they have a lot of freedom to push forward. Argentina’s average position map in one of their matches perfectly illustrates this. 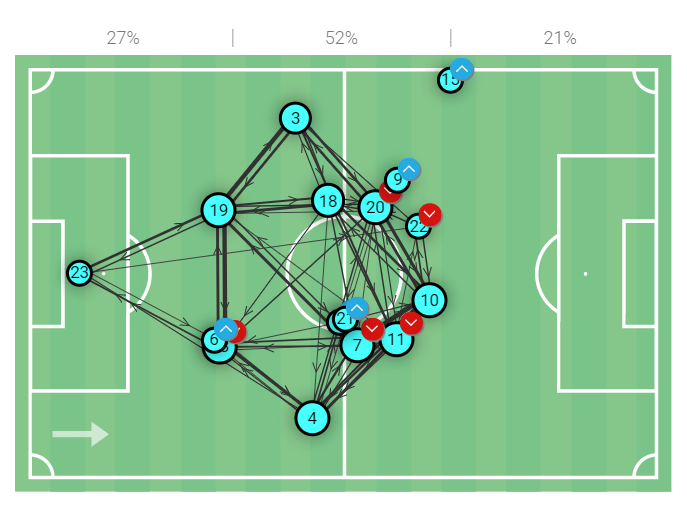 A backline of four is very consistent, and perhaps the only rigid section of their structure. In the South American World Cup Qualifiers, their goalkeeper Emiliano Martínez averaged 3.87 long passes per 90 compared to 13.79 short passes per 90. They obviously look to build out of the back with frequency, and the backline has a very important role in this. 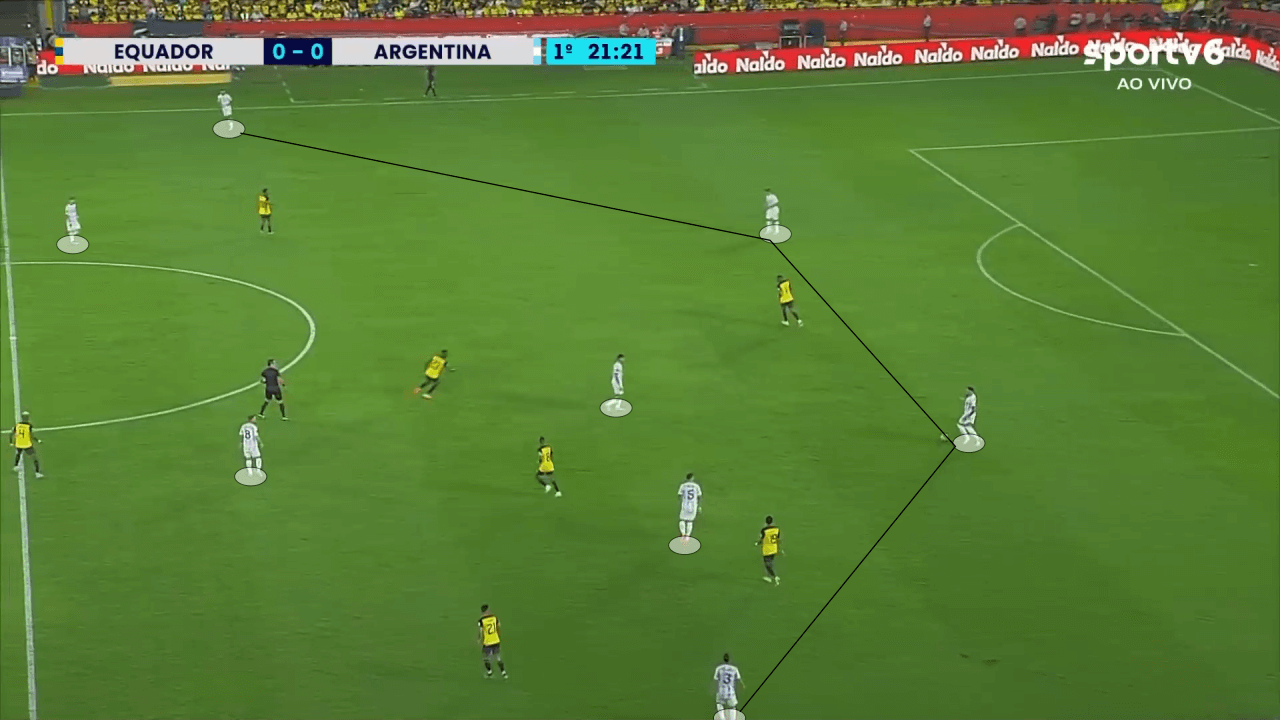 Ahead of them, there is no set structure. As we’ve seen, their formation and distribution of midfielders and forwards constantly changes. The only constant is how narrow they are. More often than not, a double-pivot will sit ahead of the backline. The other midfielders and forwards will naturally float further ahead. Overall, the midfield is very fluid with no defined shape. Players are very close to each other and adopt a very narrow structure. 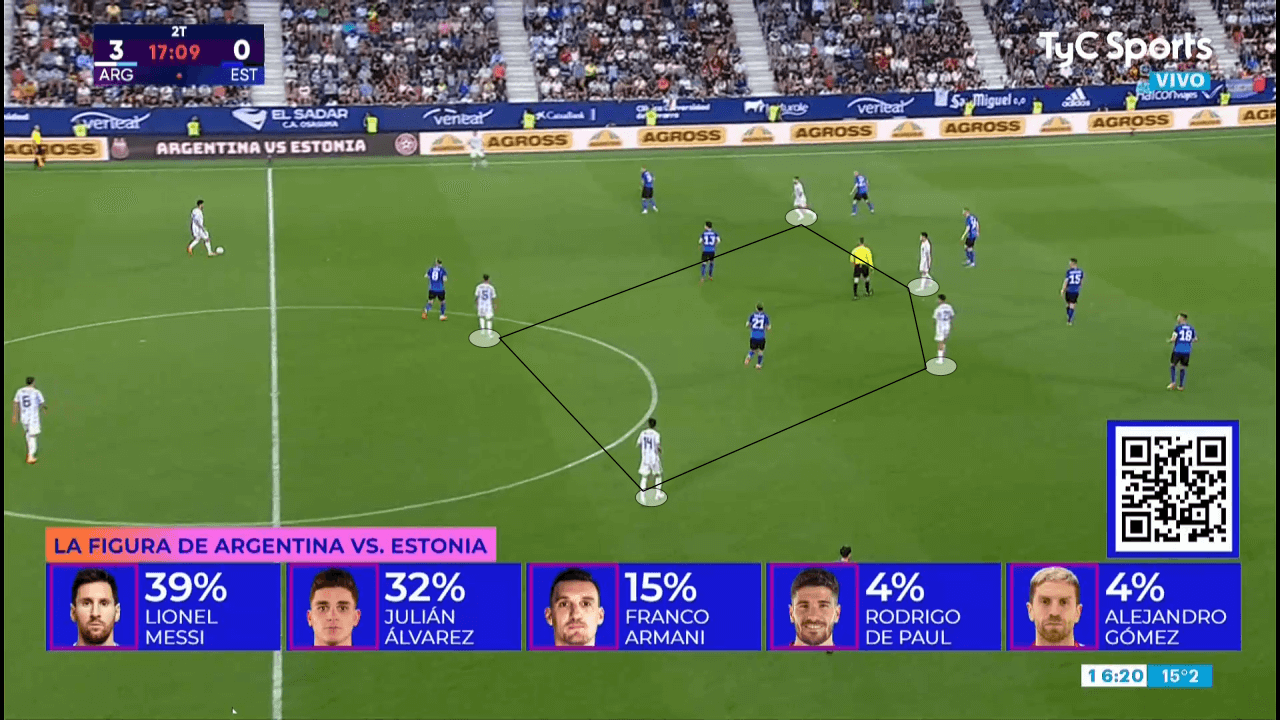 La Albiceleste value possession significantly more under Scaloni than previous managers. In the 2022 World Cup Qualifiers, Argentina averaged 58.6% possession, with 480.07 passes per 90. Not only do they have more of the ball, but they are much more controlled with it. They averaged the lowest long passes per 90 in the competition, with only 27.9. In the last calendar year, for example, only 6.17% of their passes were long. Nonetheless, they are still able to break lines and progress through the zones with frequency, averaging 61.34 progressive passes per 90. Finally, they averaged 11.58 shots per 90 and scored 27 goals in 17 matches. They are clearly very effective in possession, but it is their style of possession, both structural and behavioural, that makes them so entertaining to watch.

The image below illustrates Scaloni’s men’s narrow structure in possession. It is fascinating how close to each other the players are, especially in the midfield and attack. This is a result of their style of possession, which is built around the idea of constant approximation around the ball. There are many factors, as we will now identify, that are essential for them to carry out this idea of football. 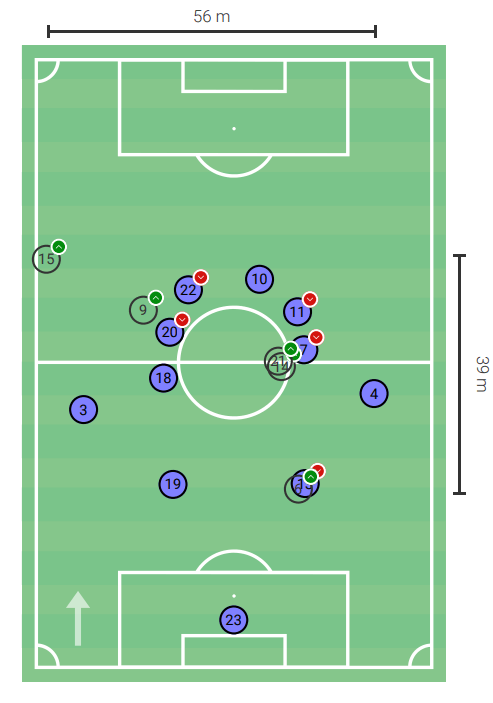 Argentina are constantly creating numerical superiority around the ball with multiple passing lanes available. Players are very near to each other and always flow naturally between themselves. This natural fluidity disorganises the defensive structure and makes them unpredictable in possession. Scaloni’s men look to progress through the zones as a unit with short passes and a very high tempo. The movement off-the-ball within their narrow structure is what allows this strategy to work, as players are constantly rotating between themselves and creating passing lanes around the ball. Within this overall system, the natural creativity and talent of the players are able to shine through. 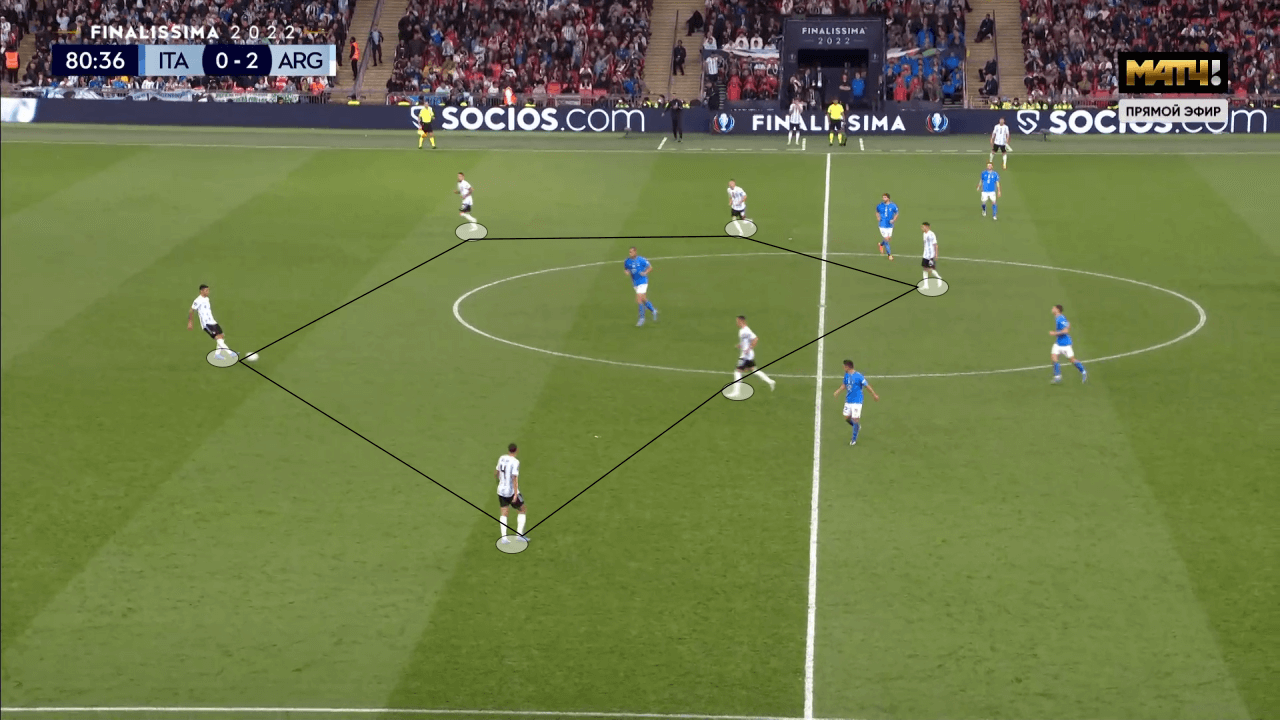 Rotations are key in allowing this system to be effective. It makes them unpredictable and very difficult to defend. It aims to disrupt the defensive organisation and free players up to receive the ball. Below, the right-back passes inside as he is pressured. 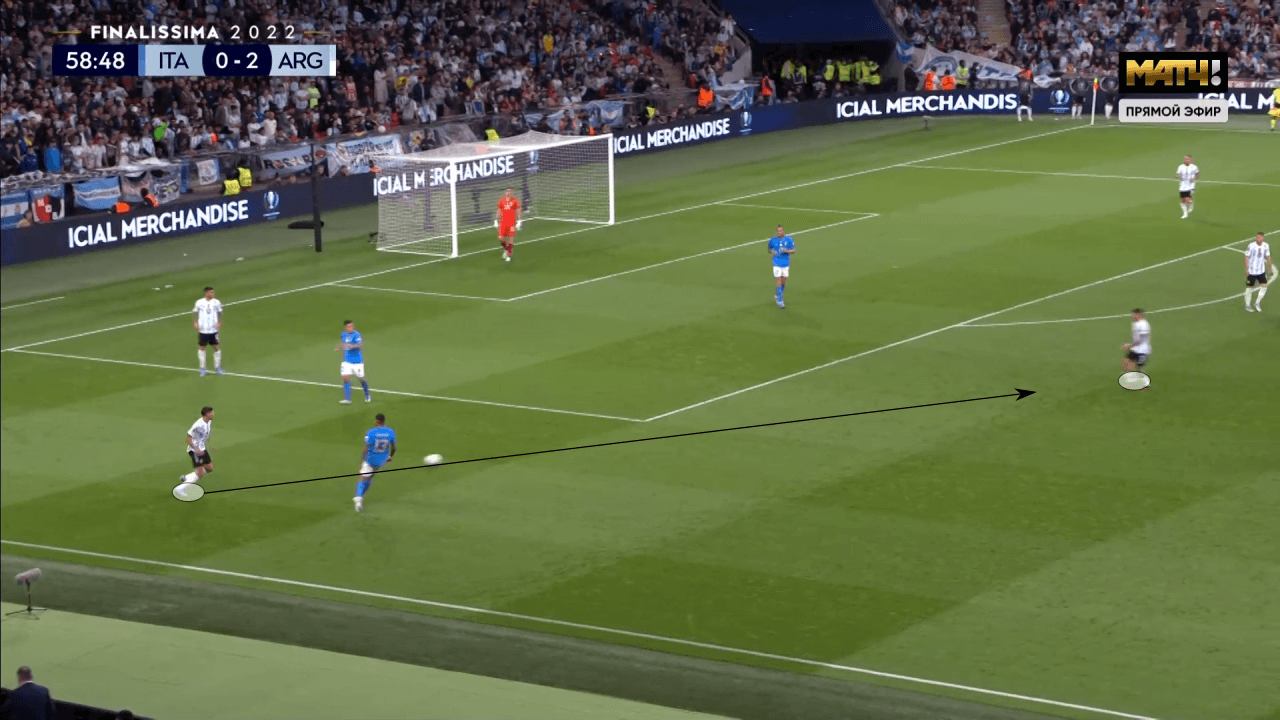 After doing so, he makes a run into the midfield in order to create space for a player to drop in from deeper. If he were to stand still after passing, he would congest the space and allow the pressure to become overwhelming. 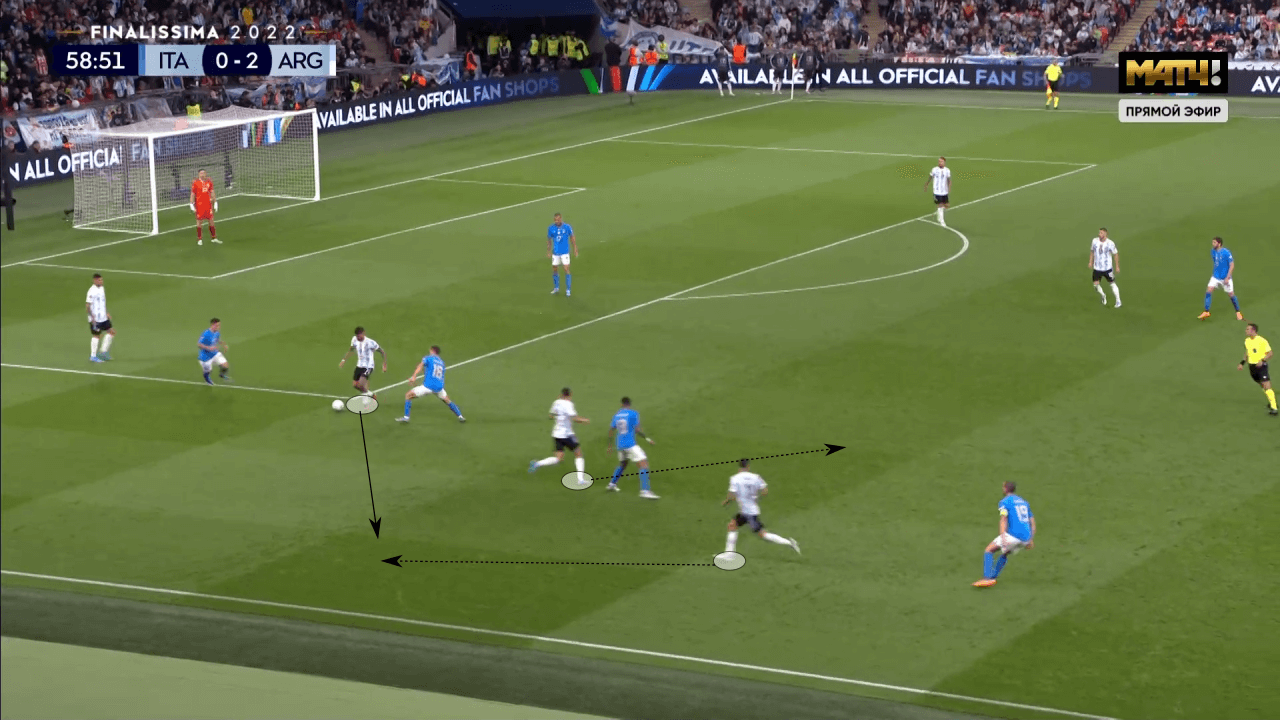 A few seconds after the segment above, the ball is switched to the opposite side. Once the left-back receives it, two players instantly make themselves available in that section. This sort of approximation and the constant creation of passing lanes is a key characteristic of La Albiceleste. 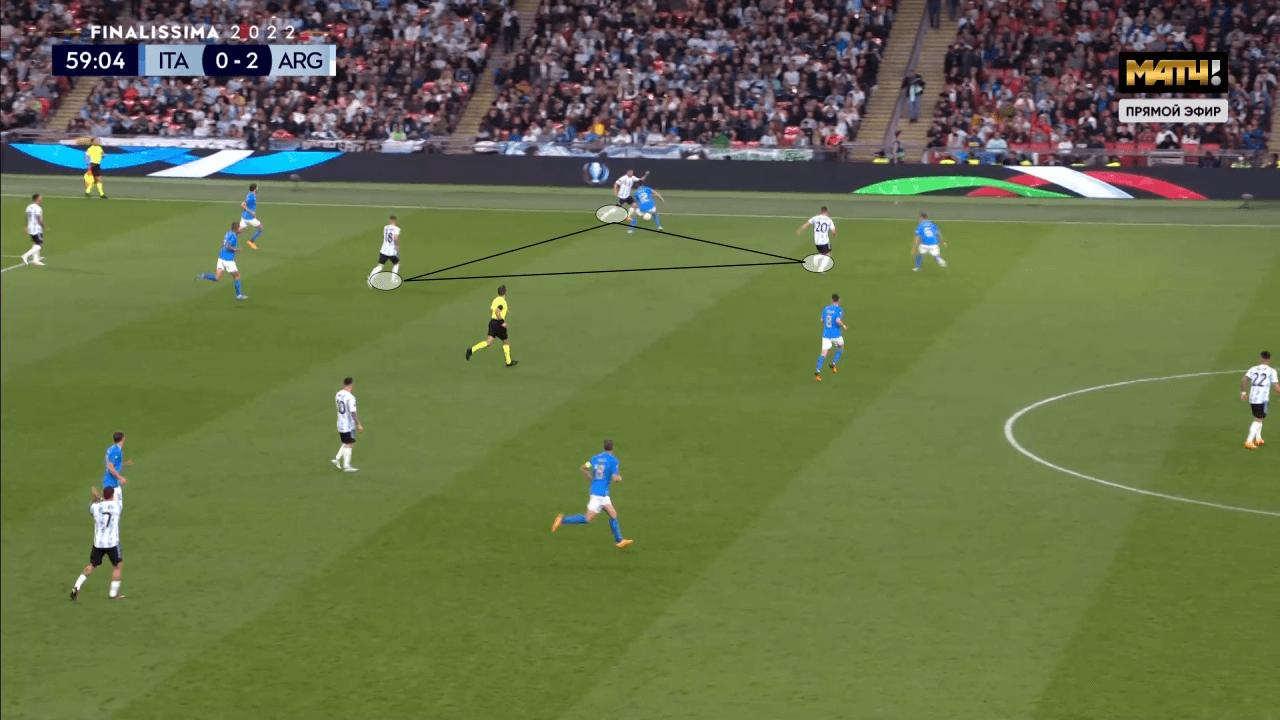 Argentina have very dangerous and talented players who are able to do terrible damage to disorganised defences. In order to exploit this, Scaloni adopts a strategy that aims to create this scenario. Obviously, numerical superiority and numbers around the ball are key aspects of their possession. By doing this in their own third, they attract a very high number of opposition players. If the opponent chooses not to engage so many players, Argentina will have superiority and can easily progress the play. If the opposition is attracted and commits players forward, they are able to create this transition-like scenario in possession.

Below, Italy have committed six players to press in the final third. With the keeper, Argentina have eight players in the same section. They are able to play through Italy’s press and advance into the middle third. 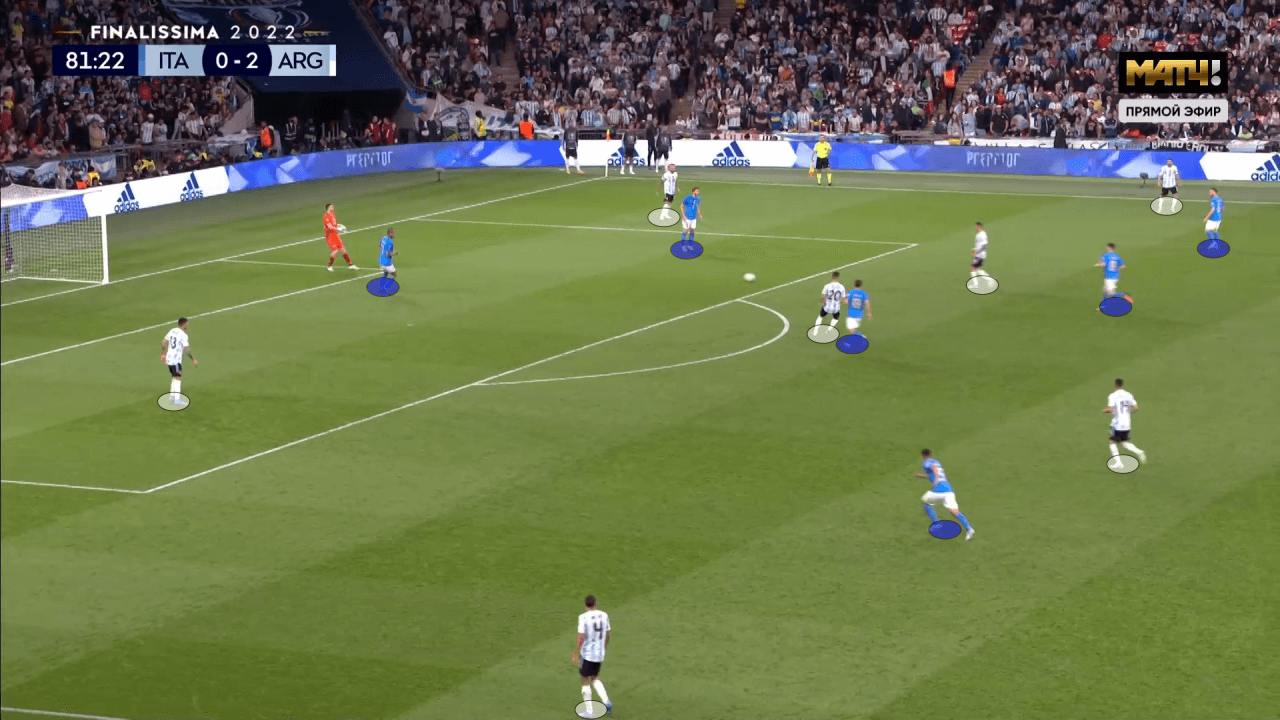 After playing through, they now attack a completely disorganised Italy defence. By attracting a high number of opposition players, they were able to create this transition-like scenario with a disorganised defensive structure. A situation incredibly favouring them given how talented and effective their players are. 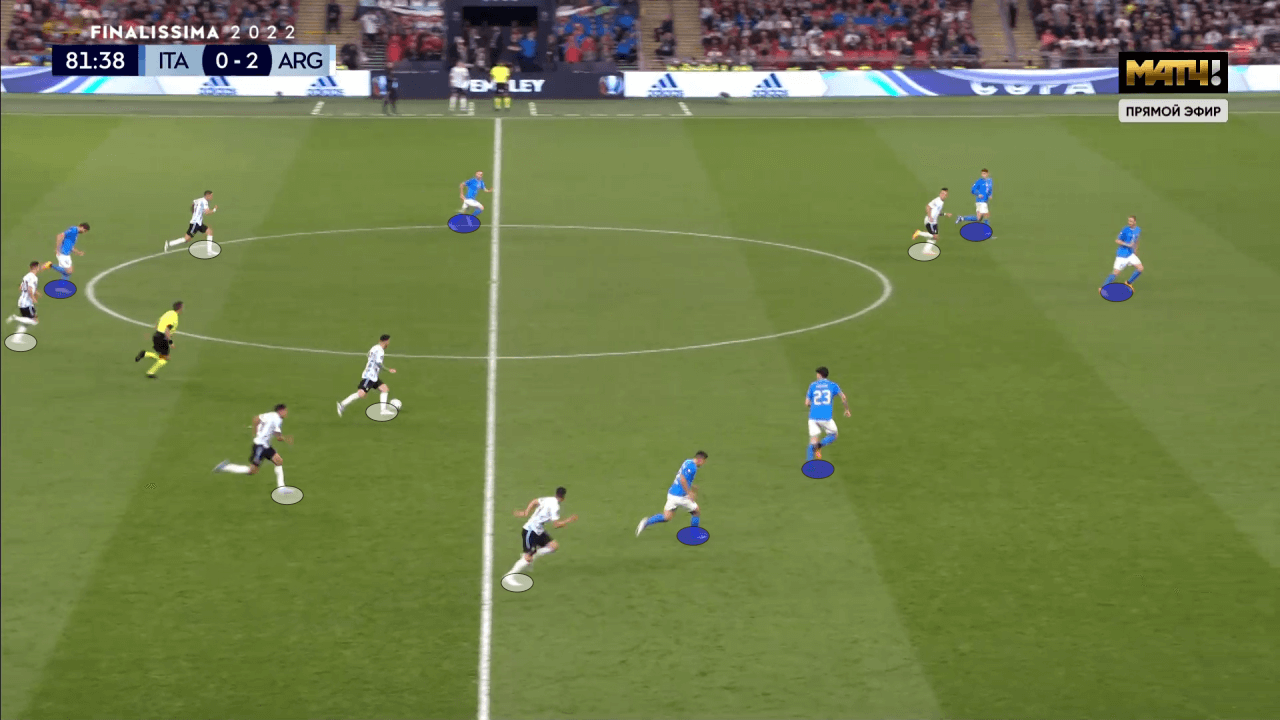 While creativity and talent dictate the attack, discipline and organisation dictate the defence. With a similar strategy of compactness and numerical superiority, they are able to conduct a very effective high press. In the World Cup Qualifiers, they averaged a PPDA of 8.79, symbolising how consistent and successful their press is. The map below illustrates their recoveries in the final third over the last five matches. A significant number of them result in shots or even goals. Furthermore, quite a few are a result of positional pressing. 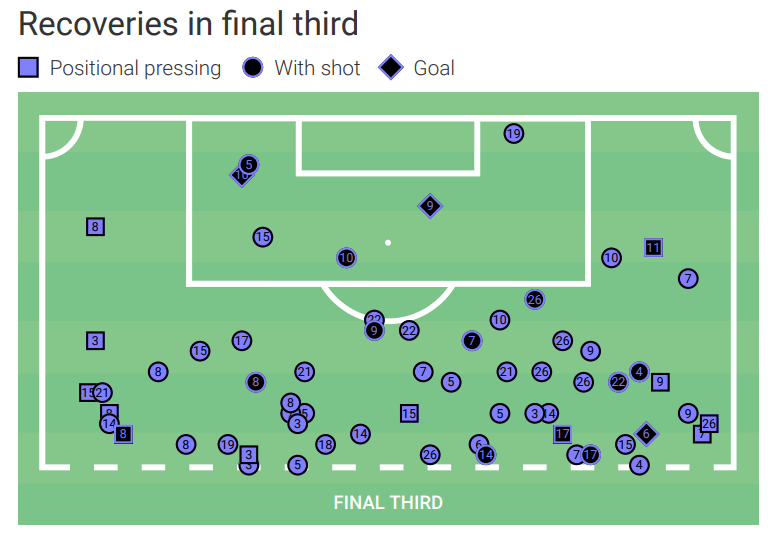 In this press, they remain extremely compact and move as a unit. The overall aim is to compress the playing area and overwhelm the opposition into giving the ball away. In the image below, for instance, they have eight players in this section of the pitch alone. 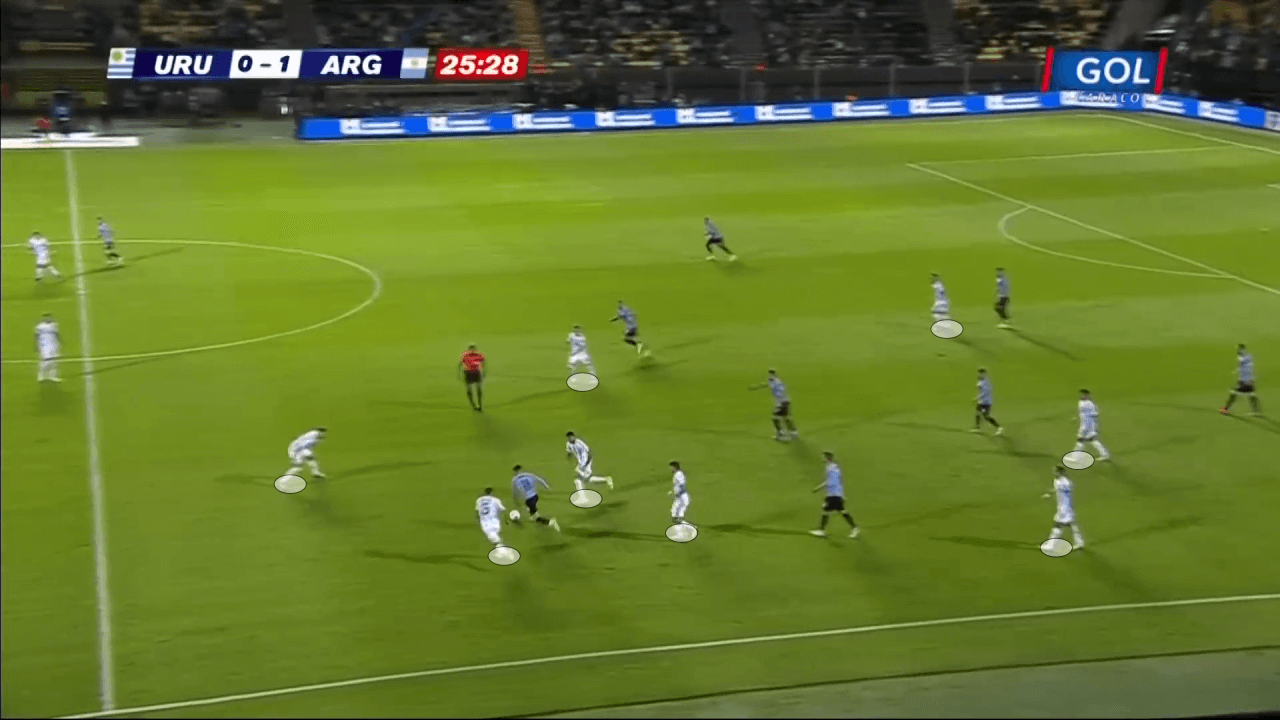 They begin by allowing the opposition to pick a side. Once the ball is played, the forwards will aim to cut the other side off and compress them to the side chosen, using the touchline as an extra defender. Again, moving as a unit congests that area. 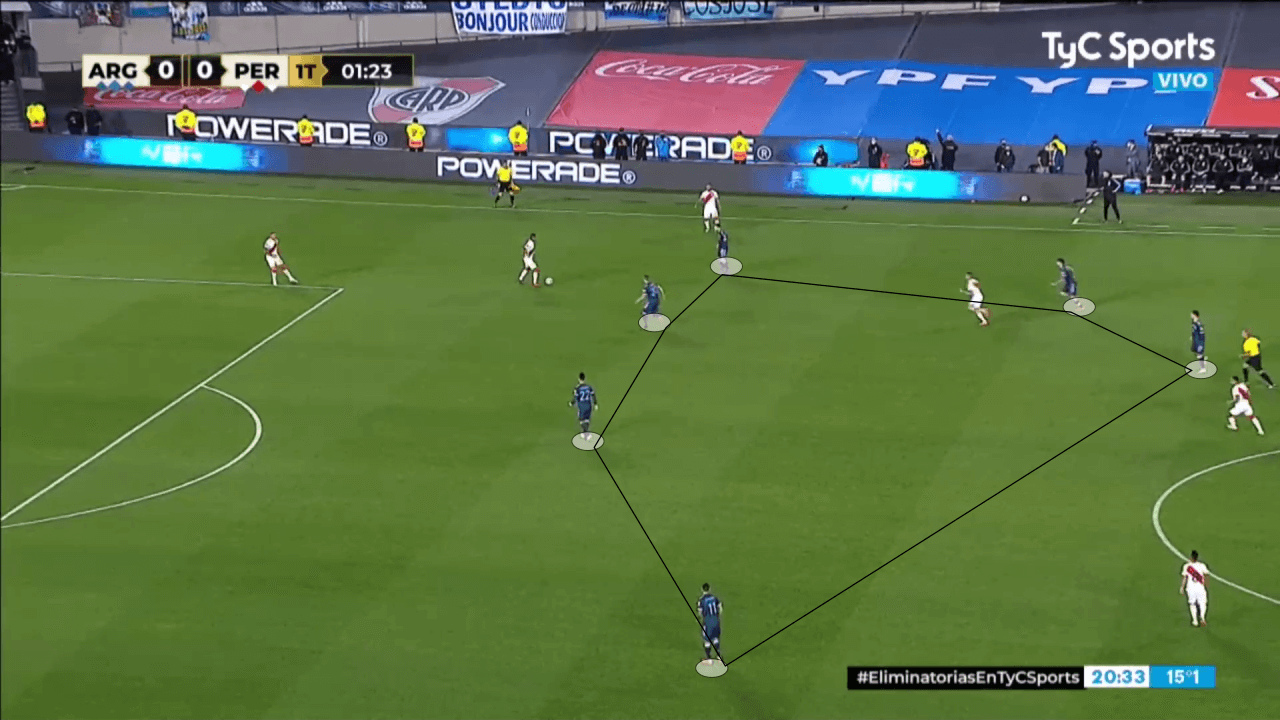 Usually, teams will have wide players on the opposition fullbacks and be evenly distributed throughout the attacking half in order to close down all options. Contrastingly, Argentina will initially remain very narrow, as they will completely and immediately shift over once a side is picked. 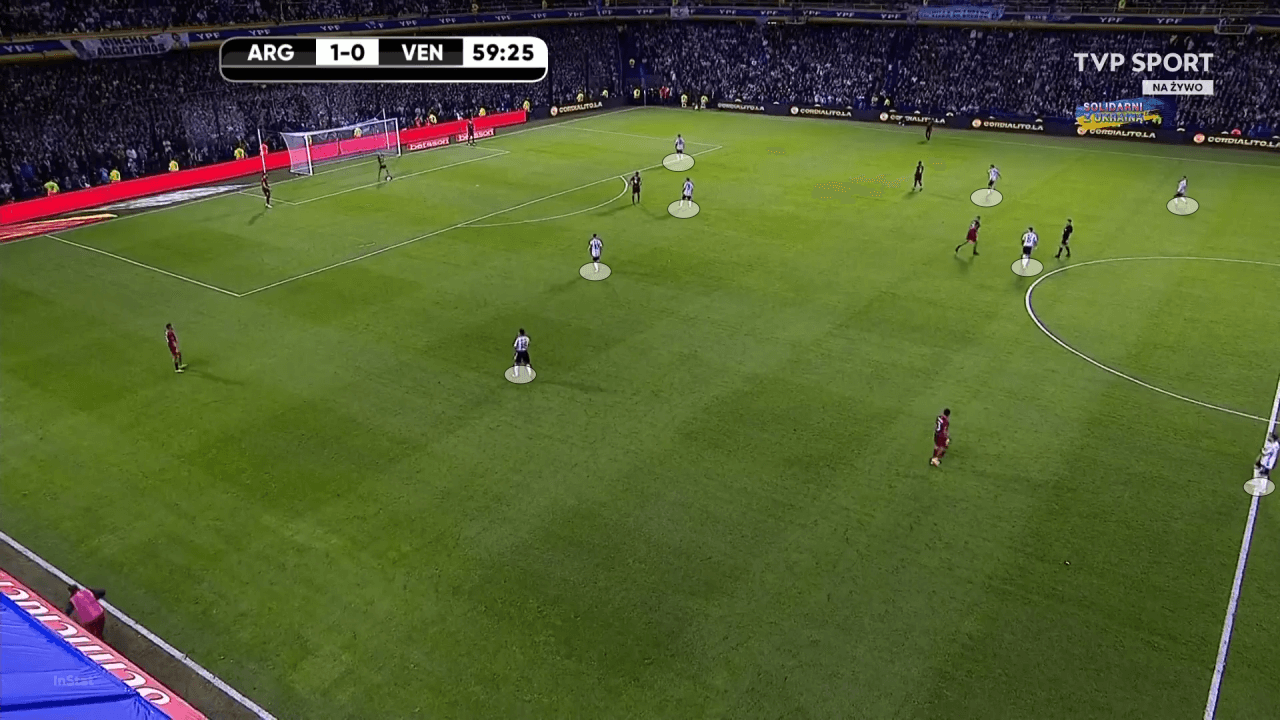 Transitioning defensively, a counter-press is also deployed. In possession, they already have a high number of players around the ball. This is extremely helpful when the ball is lost, as they already have players there to recover the ball. In the image below, for instance, they are able to immediately have five players pressing Colombia’s player. 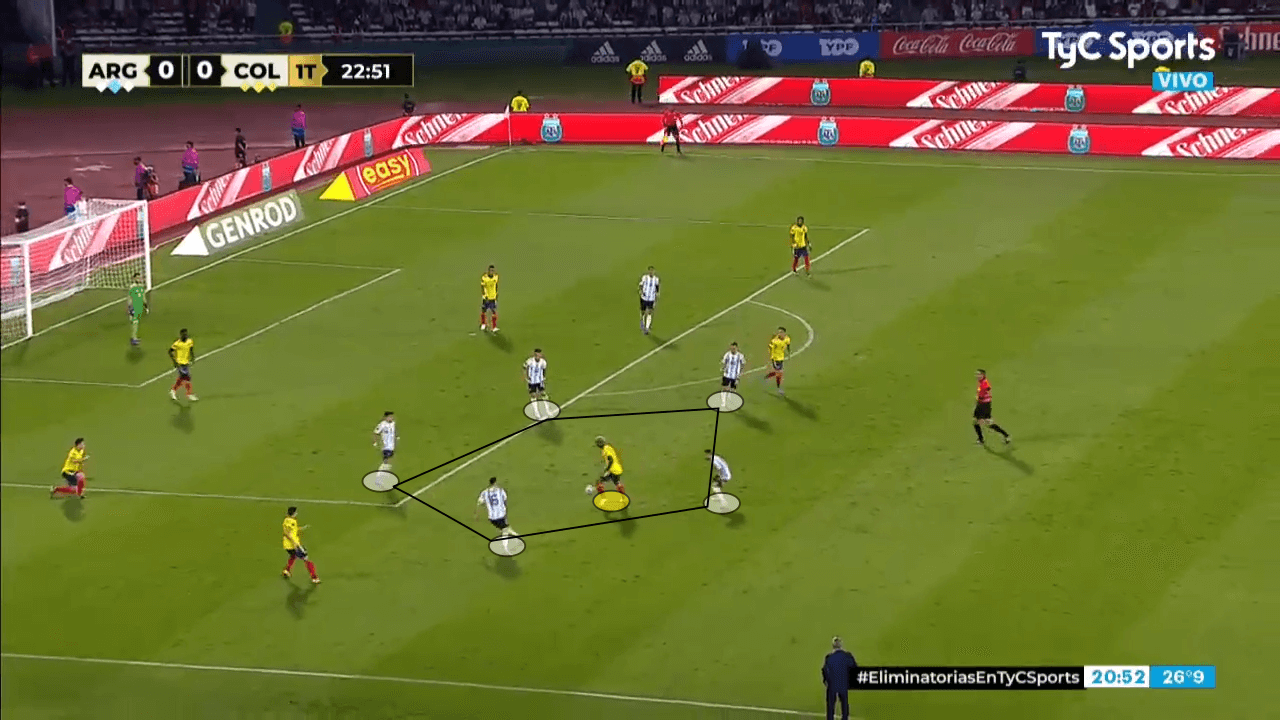 In lower blocks, they maintain a similar organisation as they do in possession. The backline of four players is coordinated and rigid. However, there is no other line of four or five ahead of them. Messi will stay in the midfield line without any defensive duties while the rest congest the midfield. In the instance below, they are in a 4-3-2-1, but just a few seconds later it turns into a 4-4-1-1. There are no defined shapes as the midfield will be very flexible defensively. 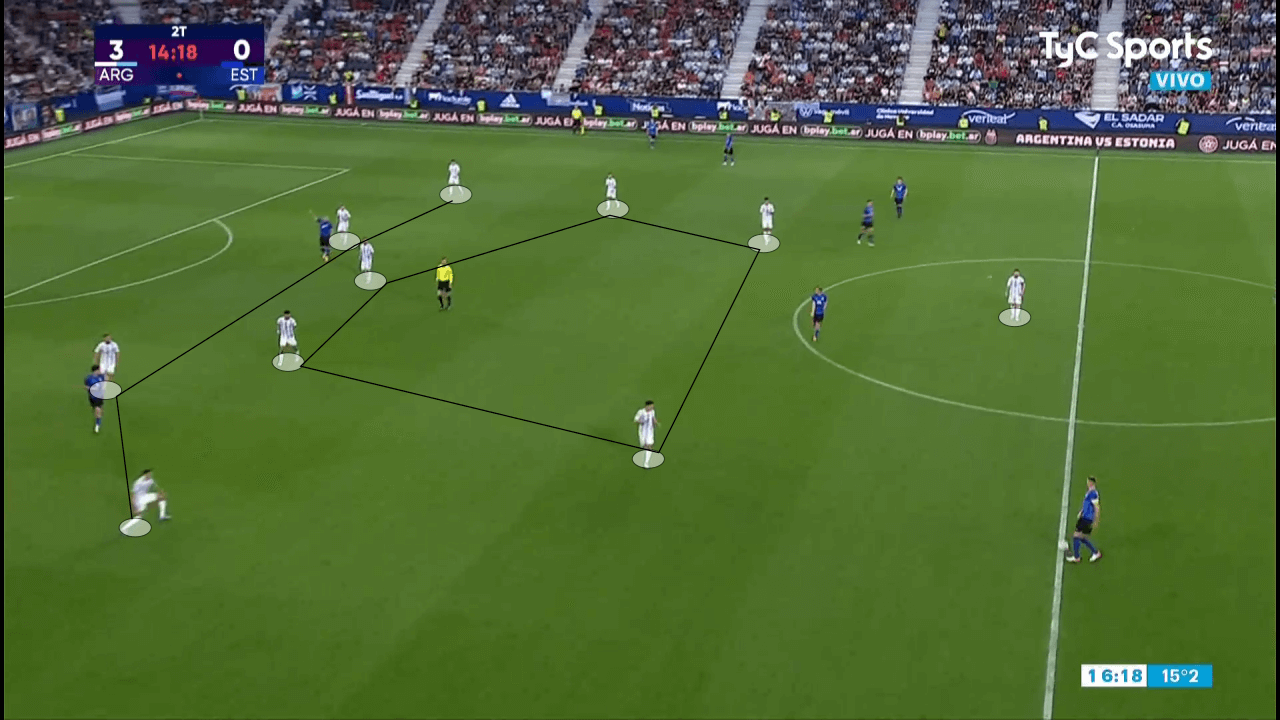 The image below highlights another instance where their midfield remains without structure. While this may not be the most organised or effective defensive organisation, it has worked for them. In the last calendar year, they have only conceded 0.3 goals per 90. 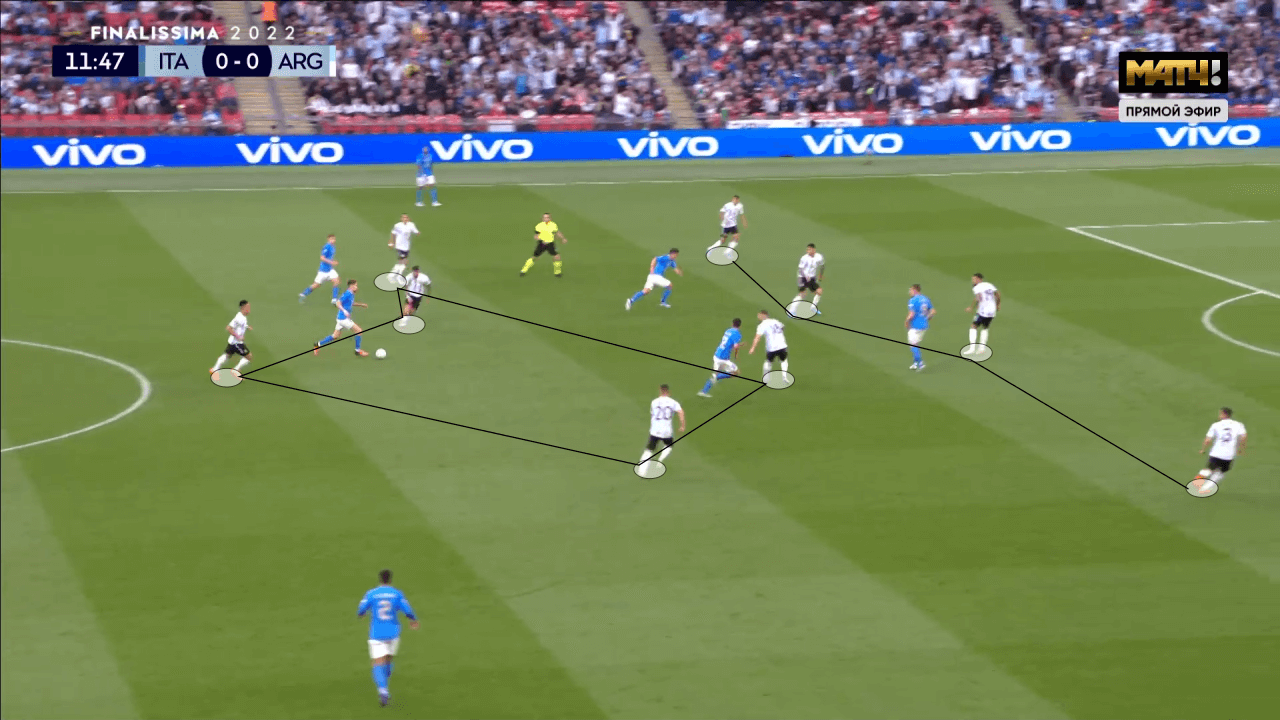 Throughout his role career, Messi’s inability to perform and deliver titles to his national team has hindered his reputation. With last year’s Copa America title, this narrative has gone away. After over a decade, Messi has finally been able to translate his club success to Argentina. The reason behind this success lies not in his individual performances, but rather in the team’s collective performance.

Scaloni has built a system that respects and enhances each player’s individual ability, without any sort of exception being made for Messi. The national team no longer plays for Messi, but rather with him. In this system, where everyone’s talent is able to shine through, Messi is able to effectively engage with his teammates and maximise his own ability. Like in Barcelona, Messi’s talent is most effective when the collective performance is maximised. 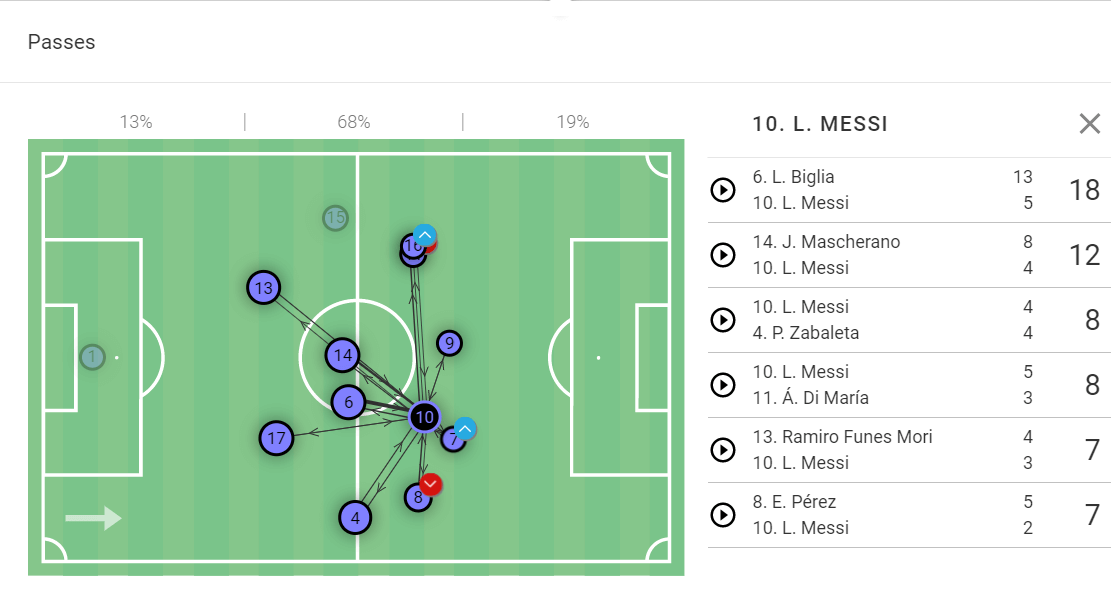 In this new World Cup cycle, there is a significant difference. Not only are the players much closer to him, but on the right, we are able to see how much more frequently he combines with his teammates, especially the forwards. 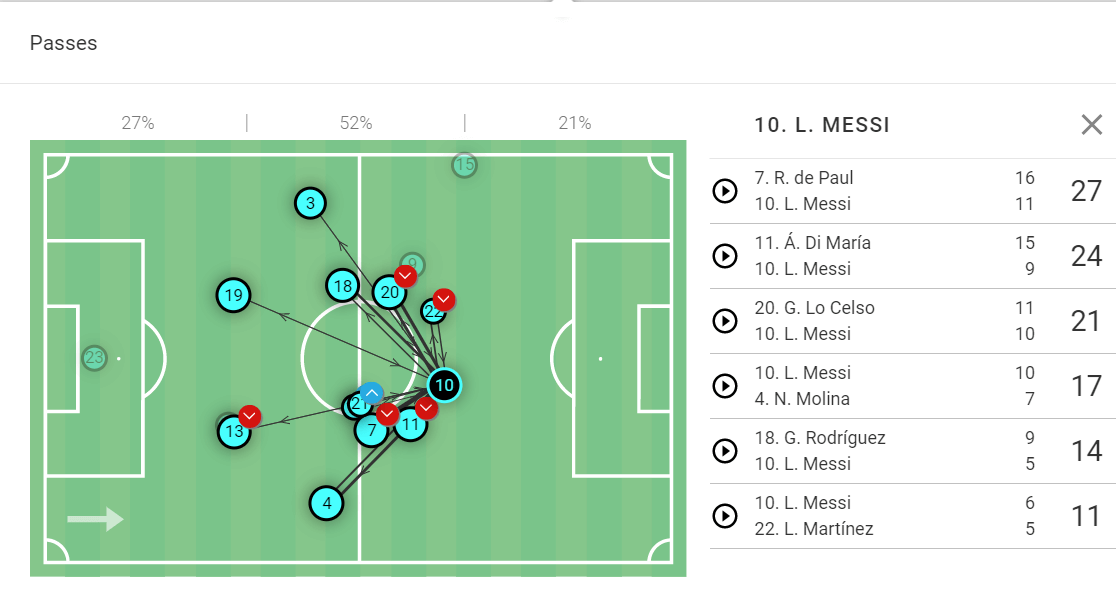 It is no longer a surprise that Argentina are one of the best national teams in the world. Not only are they serious contenders for the 2022 World Cup, but they are playing beautiful and entertaining football. In possession, they have adopted a more collective approach built around a couple of key principles. In this system, each player is able to shine through in their own respect and they no longer rely on Messi’s talent. Messi is no longer the system itself, but rather enhances a well-run system. Unsurprisingly, he has been able to perform better than ever before in this new-looking Albiceleste. Out of possession, organisation and discipline are prioritised. Scaloni has built a solid defensive system that presses high while still defending well in low blocks.

It seems, after decades of disappointment, Argentina are finally back at the top. The upcoming 2022 World Cup may crown what has been a beautiful project led by Lionel Scaloni. 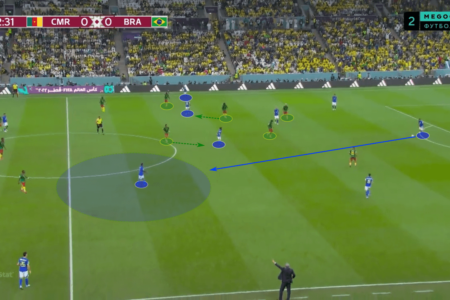 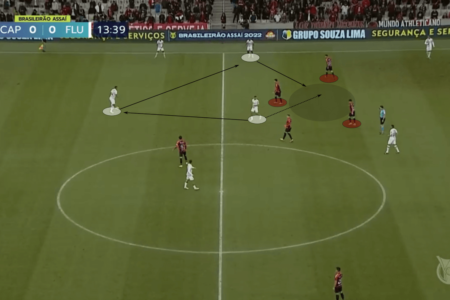 Fernando Diniz has taken the world by storm with his unorthodox tactics at Fluminense. As an antidote to the modern […] 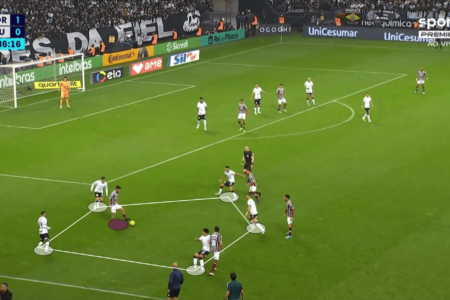