Willie Kirk has been sacked from Everton Women lately and Jean-Luc Vasseur was announced as the new Toffees head coach. The French coach led Olympique Lyonnais to European glory for the last few seasons as he won the Division 1 Féminine with them, the Coupe de France Féminine and more importantly, the UEFA Women’s Champions League, which earned him the 2019-2020 UEFA Women’s Coach of the Year. All in all, he won five titles during his spell at Olympique Lyonnais.

Vasseur is therefore used to coaching quality players and to competing for the top spots during competitions. This is certainly a positive aspect to consider as it will affect the whole Everton Women environment positively and drive the team forward to achieving greater results than the previous ones. It is true however that the new head coach mission will not be a simple one due to the different issues that need to be addressed in order to compete seriously for the top FAWSL spots alongside Chelsea, Arsenal, Manchester City, Manchester United and the rest of the teams.

The team failed to start the season in a successful way by losing several times while conceding a lot of goals per match. Everton lost 4-0 against both Chelsea and Manchester City during the first two FAWSL fixtures before losing 3-0 against Arsenal and adding another heavy 5-1 defeat against Manchester City in the Continental Cup. The failure in resisting and in lacking defensive compactness was clear during these games despite being able to win other matches. Nevertheless, the usage of the newly recruited played wasn’t really convincing during this period. These motives and perhaps other motives as well confirmed the decision of sacking Kirk and signing an expert European manager whose experience was unquestionable, given that he used to manage the best European team in terms of results during the previous years.

This experience however does not mean that Vasseur is a magician who will turn things upside down for the better in one week. Experience also does not mean that Vasseur is guaranteed to succeed at his new club. That’s why we will look at what he can propose in terms of tactics and how he will deal with this new difficult situation. This tactical analysis article will provide an overview of Vasseur’s tactical ideas and philosophy at Olympique Lyonnais while linking these ideas with Everton and attempting to determine how he will deal with the squad.

In terms of attacking ideas, Vasseur is a coach who likes to rely on movement without the ball to create free spaces behind defences, especially on the wings. Having had the opportunity to coach excellent full-backs at Lyon, he exploited his players’ excellent attacking addition and usually instructed them to advance when the team has the ball, creating a 2-5-3 formation that can transform even into a 2-4-4 formation. This attacking approach worked well at Lyon and was used as one of OL’s most efficient weapons. Players like Bronze were crucial in terms of assists and attacking contribution thanks to this playing style.

It is also worth mentioning that the team’s midfielders cover for full-back advancements so as to avoid numerical inferiority in counters and not put the team at risk during every opportunity. 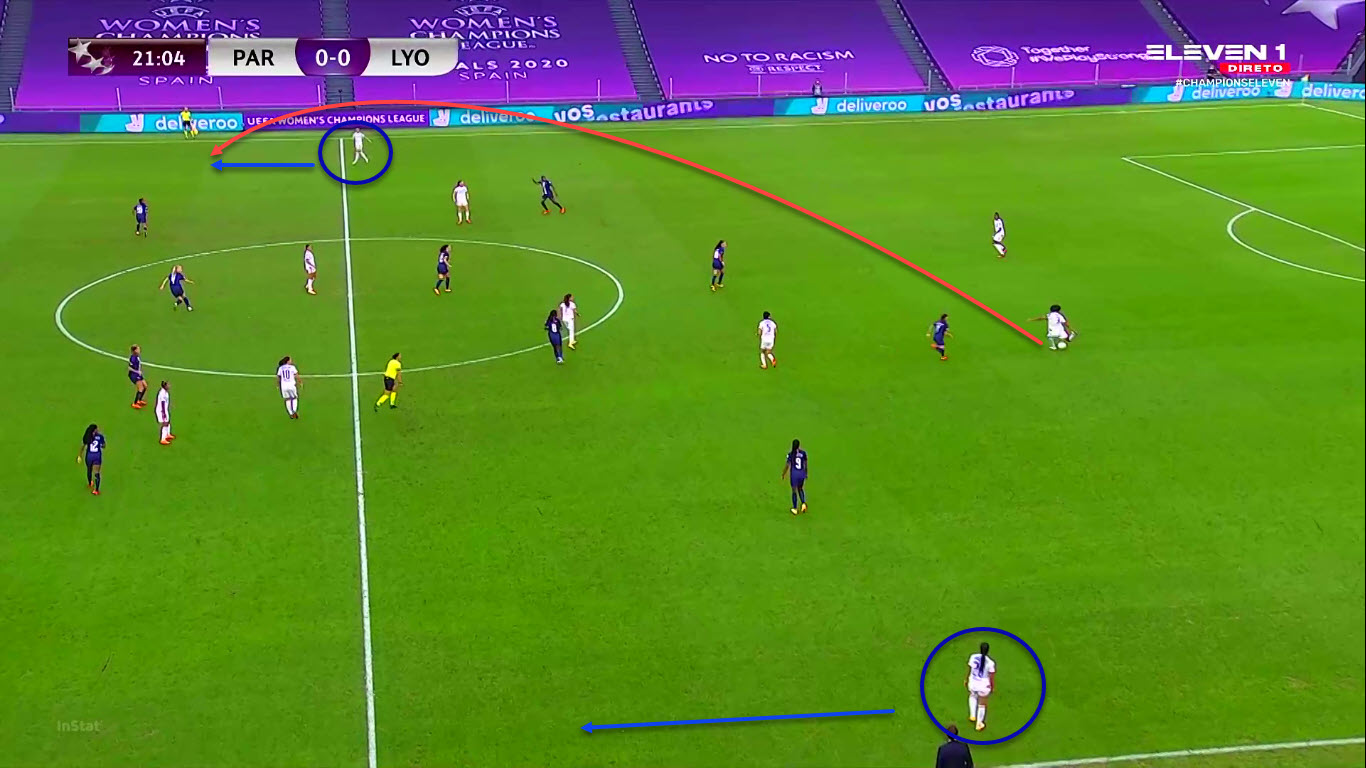 Applying this type of attacking ideas is possible and may happen soon. However, one must not forget that the squad is different and player characteristics are distinct.

Out of possession tactics 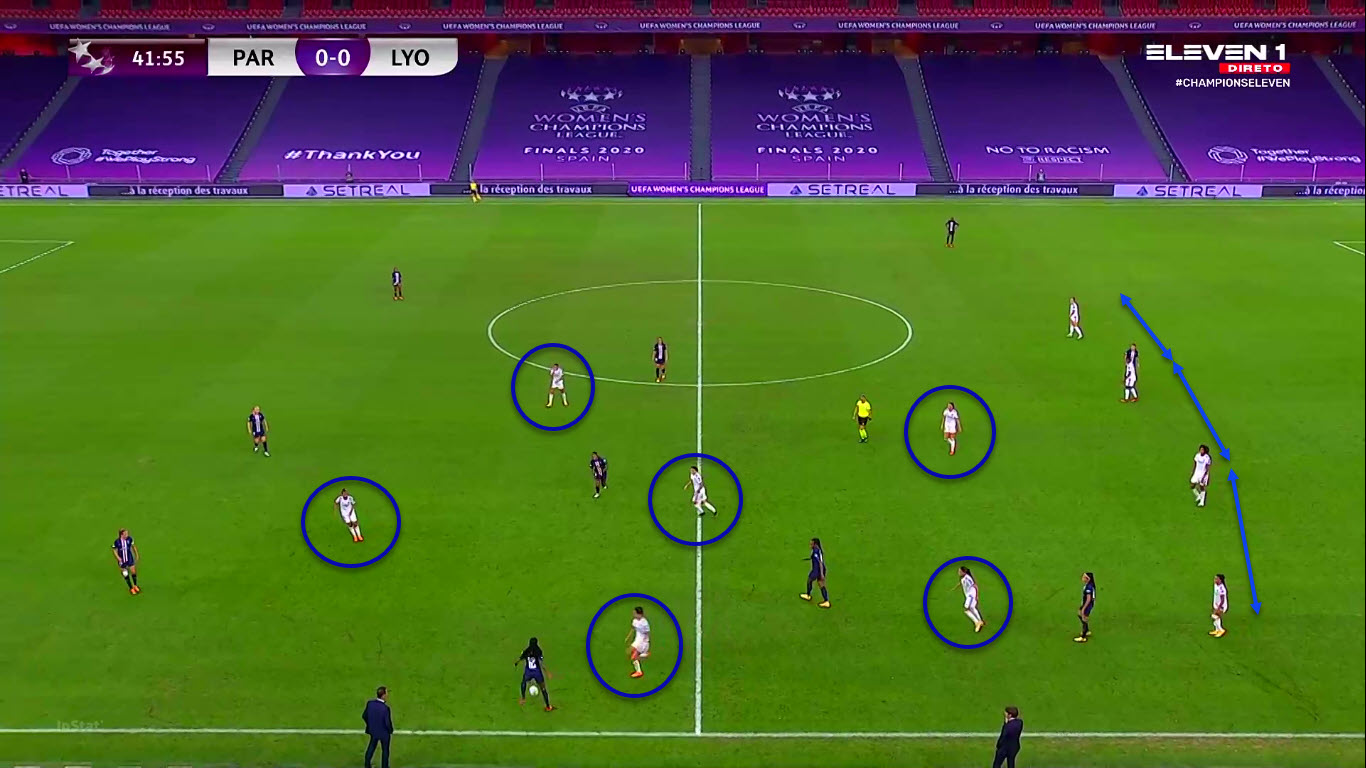 As you can see in the picture above, Vasseur adopts a 4-2-3-1 formation when defending or when simply not having the ball. This method is applied to gain numerical superiority in midfield and prevent opponents from attacking, and therefore it needs powerful defensive midfielders and attacking midfielders who can support in the non-possession phase.

An assessment of Everton’s midfielders should be done to determine whether this plan would work or not. Anyways, the squad has already been reinforced with quality midfielders like Galli and Bennison who can both be fundamental under Vasseur’s regime. It is true that Kirk didn’t exploit them very well and was unable to get the best out of them, but this doesn’t mean that they aren’t excellent players. Vasseur will be required to display his players’ real value in the near future, even though this may need time.

What needs to be fixed at Everton?

Vasseur should be intelligent enough to think extensively prior to using methods that don’t necessarily suit the players’  characteristics. Moreover, he should not repeat Kirk’s mistakes when dealing with the newly signed players. In fact, Everton made some of the best transfers in FAWSL but unfortunately for them, these players were mostly played out of position or were not given specific roles during games.

Therefore, it will be fundamental for every player to be played at her natural position to give her the possibility of giving 100% or more of her abilities. It may sound like a very simple thing, but employing players in their natural positions increases their level of concentration and adds a lot more cohesion between the players, as opposed to the confusion the happened during previous games.

Kirk used to employ the 4-1-3-2 formation during his last games with Galli as a defensive midfielder and both Gauvin and Duggan as strikers. 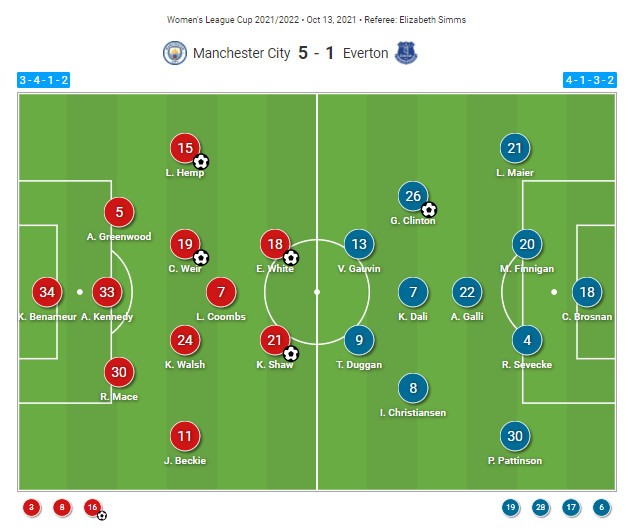 However, Vasseur will more likely use his preferred 4-3-3 formation with some expected alternations based on the types of games.

In addition to that, he will need to work on fixing the defensive system and especially covering during 1 vs 1 duels in dangerous areas, something that didn’t happen during this start of the season. The best example is shown below when Everton’s right-back wasn’t even aware of Lauren Hemp’s existence on the left-wing and didn’t mark her. Moreover, no one was there to help her in marking or to cover for her mistake. This led to conceding numerous goals so far this season and may lead to other goals as well if not fixed. 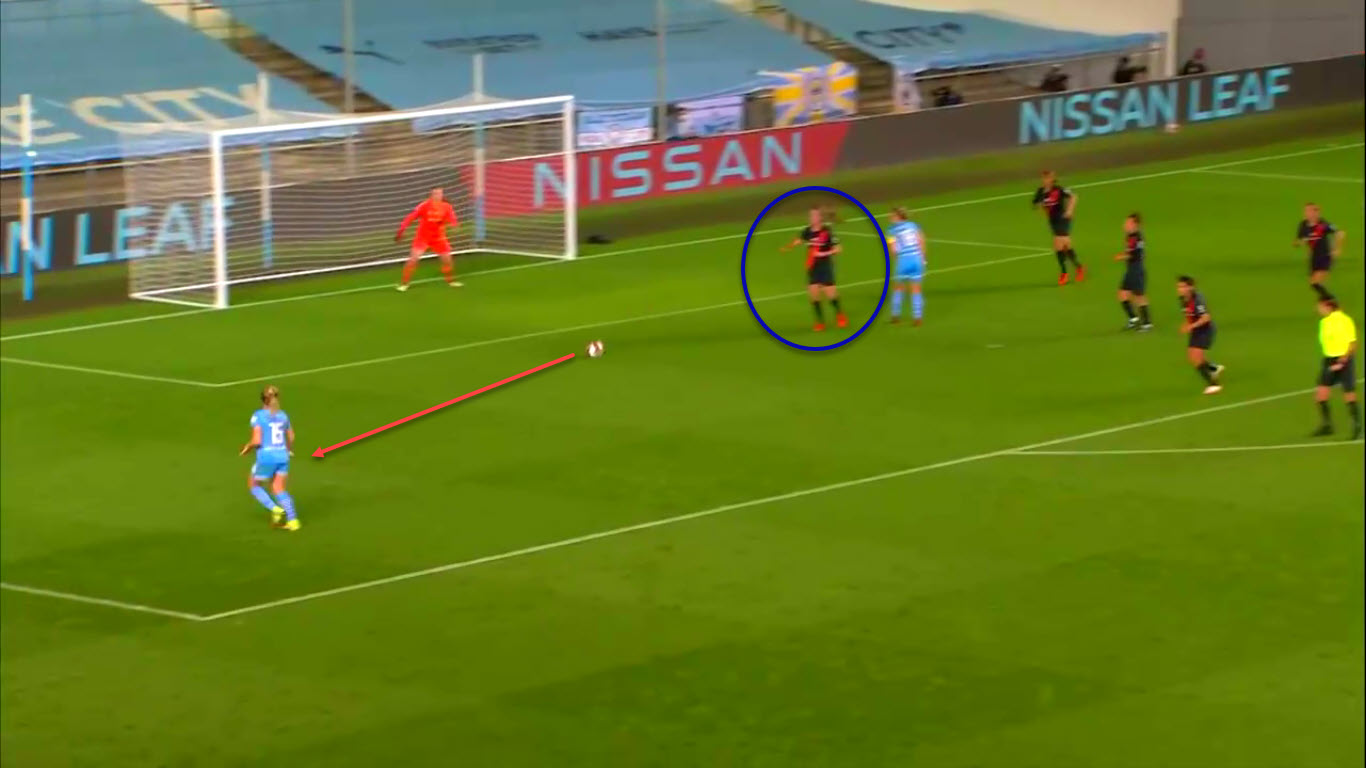 Everton will also need to work on playmaking since they weren’t able to create many chances per match and this was due mainly to the confusion existing in the heads of players and the complexity of what they have been asked to do previously. 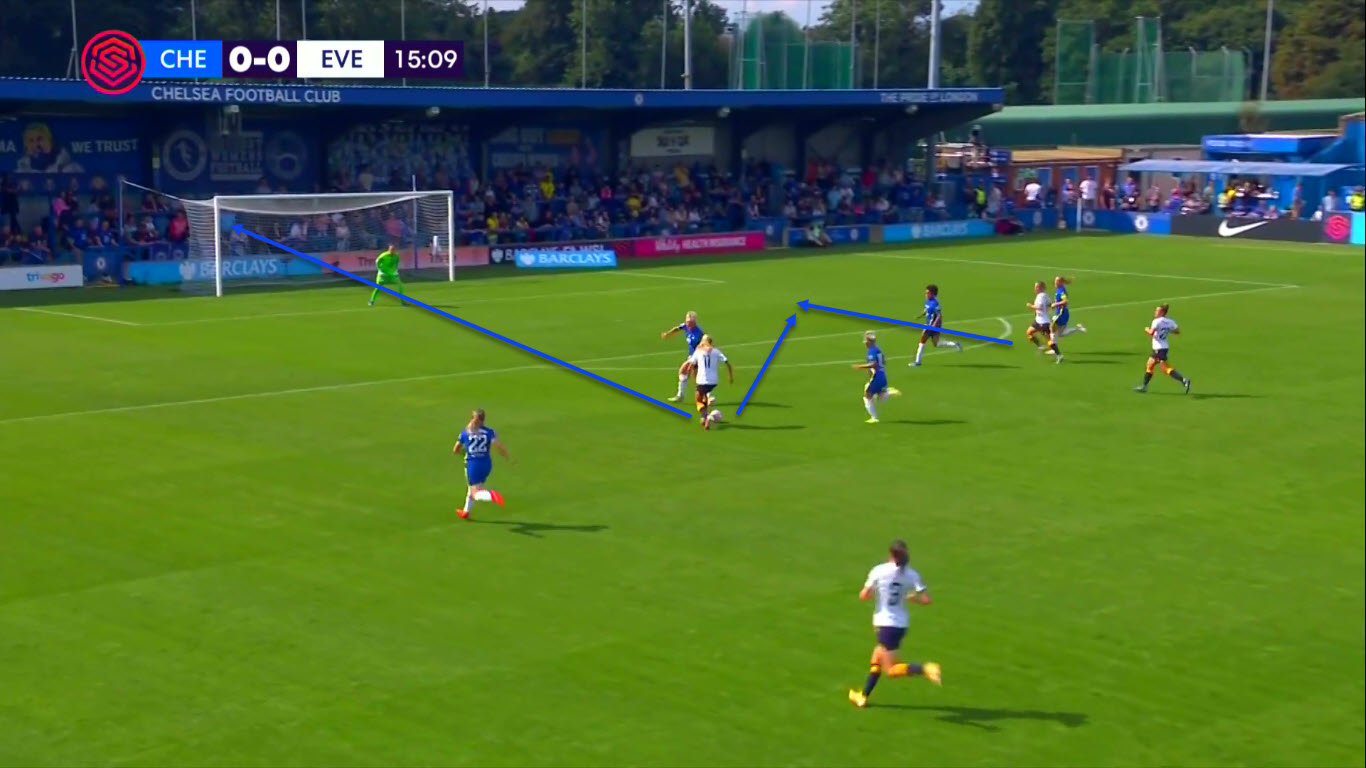 For instance, in the above chance, Everton’s player was not able to make the adequate choice during a dangerous action mainly due to confusion and hesitancy.

Vasseur’s role at the start of his spell will also include clearing his players’ minds of all this confusion and making everything clearer to them. Also, working on enhancing finishing skills and training on different attacking patterns will help the team a lot in the possession phase and make their attacks more dangerous.

Vasseur’s task will certainly not be an easy one even though the team is filled with very good players. But if he knows how to deal with his team, he is able to lead them to excellent positions in FAWSL and fight for a top-three spot.

What is certain however is that the team will improve a lot if it will be well organised in terms of formations, tactical ideas, and player roles on the pitch.