Frank Lampard took the Everton job at the end of January, following a year out of work. Since taking charge of the Toffees he has managed them to Premier League safety and is looking to build on what has been an eventful end to the season. The former Chelsea boss has certainly struggled in Merseyside averaging 1.11 points per game.

This tactical analysis will look at how Lampard has kept his Everton side in the Premier League for another season. Within this analysis, the tactics and decisions made by the manager will be understood and explained.

When in possession Lampard sets his side up in a 3-4-3 formation. When in possession, Everton look to progress the ball through the thirds quickly rather than slowly building up. By utilising the aerial strength of Richarlison and Calvert-Lewin, they can comfortably play long to the forward players.

The aerial strength means that Everton look to play longer but they are also regularly faced with difficulty when building up from deep. Below is an example of how easily marked the Toffees are when looking to build up. The lack of pivot in Lampard’s midfield means that the Blues are not comfortable in playing it short and building up.

To add to this, the centre backs do not split wide enough to create space. This is something which Lampard is aware of and his tactic is to go long to his attacking players. By doing this Everton completely bypasses any type of press from the opposition and look to maintain possession from higher up the pitch.

However, having said this when given time and space Everton are able to build up by receiving the ball from their goalkeeper. This isn’t something which happens regularly as teams tend to press high against Everton because of their ‘lack’ of ability on the ball, in the defence. 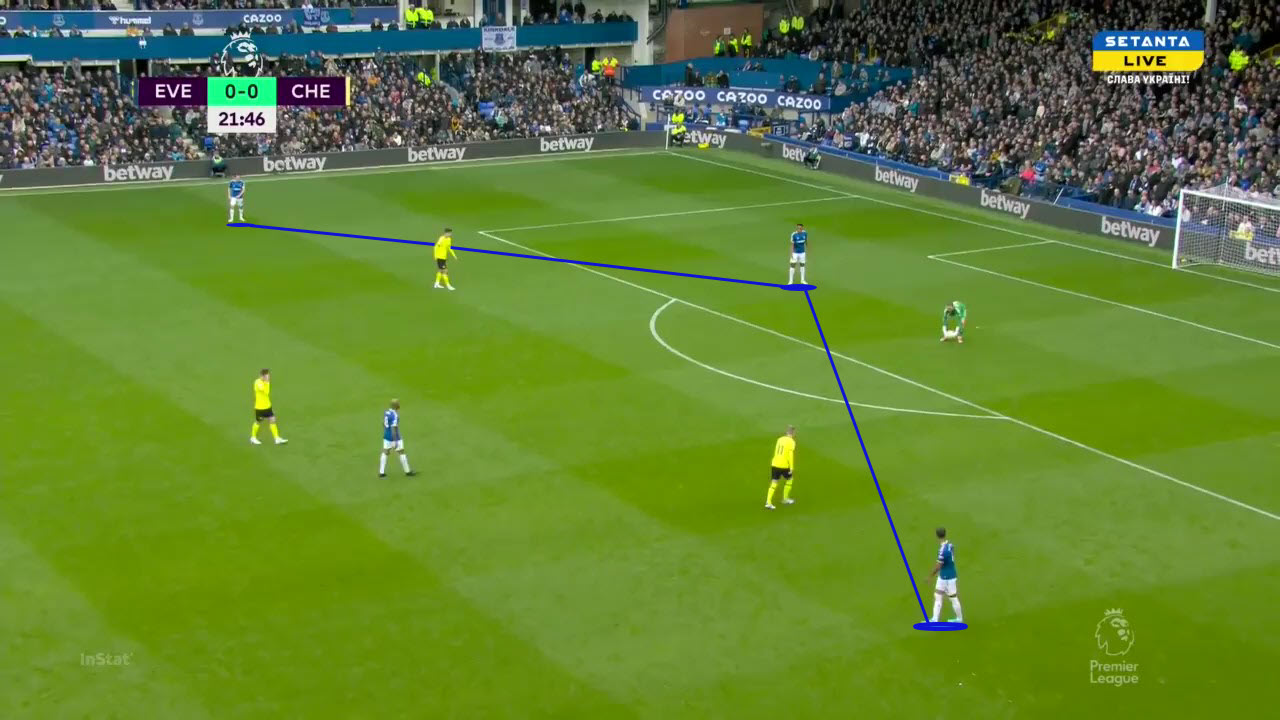 Lampard’s prefered formation heavily involves the wide channels as there are almost two sets of wingers in action. More recently Vitaliy Mykolenko and former Arsenal player Alex Iwobi have been used as the ‘wingbacks’ in the side. Everton’s use of their wingbacks allows for their more attacking players to maintain a centralised position.

Below, Mykolenko is pictured overlapping attacker Demari Gray. This move is a common theme in Everton’s possession style and way of attacking. Both wingbacks provide lots of energy and width giving the attackers freedom to express themselves centrally. The attackers play centrally which creates space wide for the wingbacks. By doing this there are always options to pass the ball to. The attacking players comfortably show for the ball into feet and the wingbacks attack the space behind the defence. 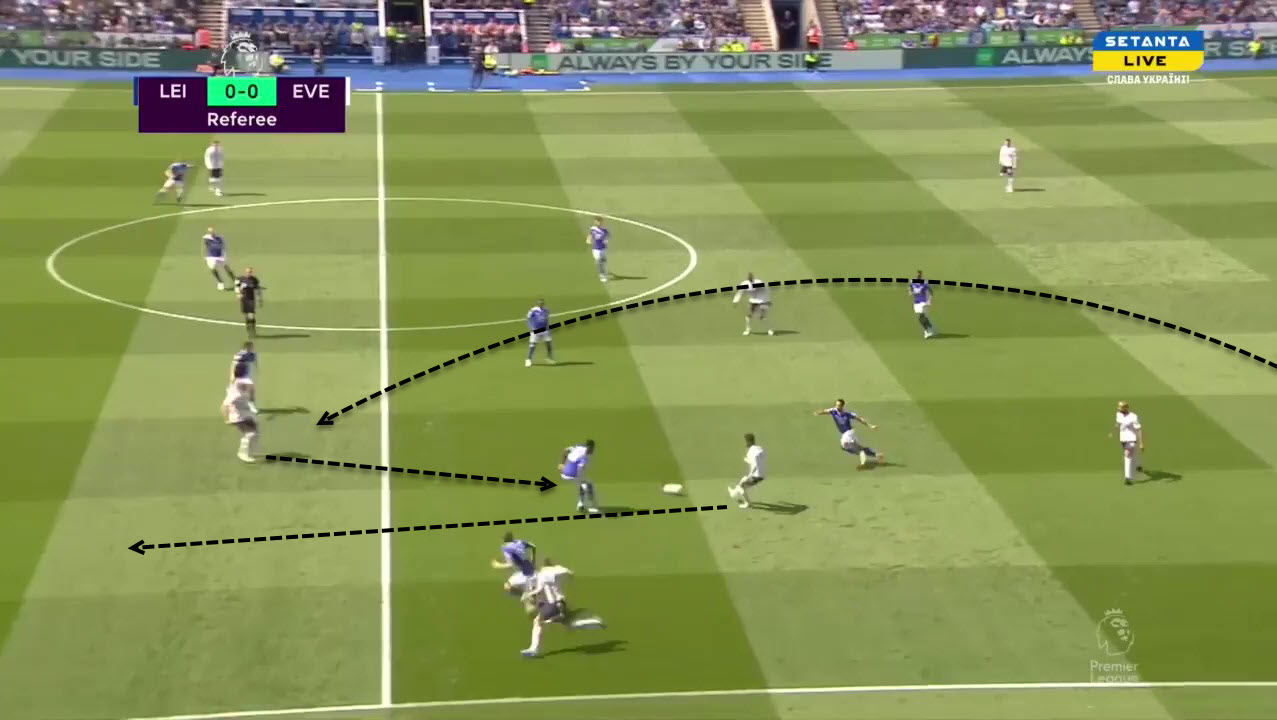 This season, in the final third of the pitch, Lampard’s side have struggled to convert chances, mainly down to the fact that star striker Dominic Calvert-Lewin has missed the majority of the season through injury. As mentioned earlier, Everton’s front players are particularly strong in the air. Calvert-Lewin averages the league’s most aerial duels per 90. 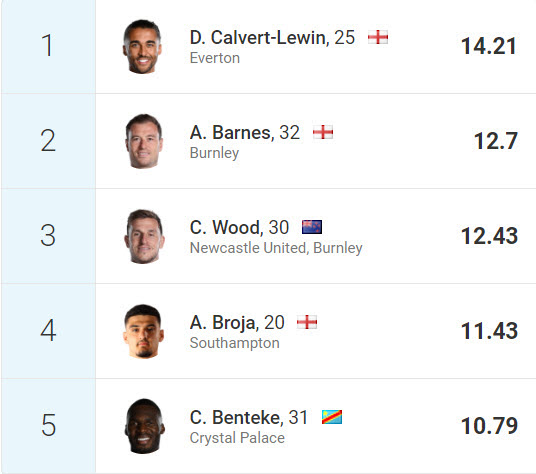 This strength is something that the former Chelsea boss looks to play to as his side regularly set up to cross the ball from all areas, especially from deep. Wingbacks usually pick the ball up in deeper areas and this is a trigger for Everton to flood the box. The Toffees have at least two attackers in the penalty area with a midfield runner arriving late, something the Everton manager was well known for in his playing days. 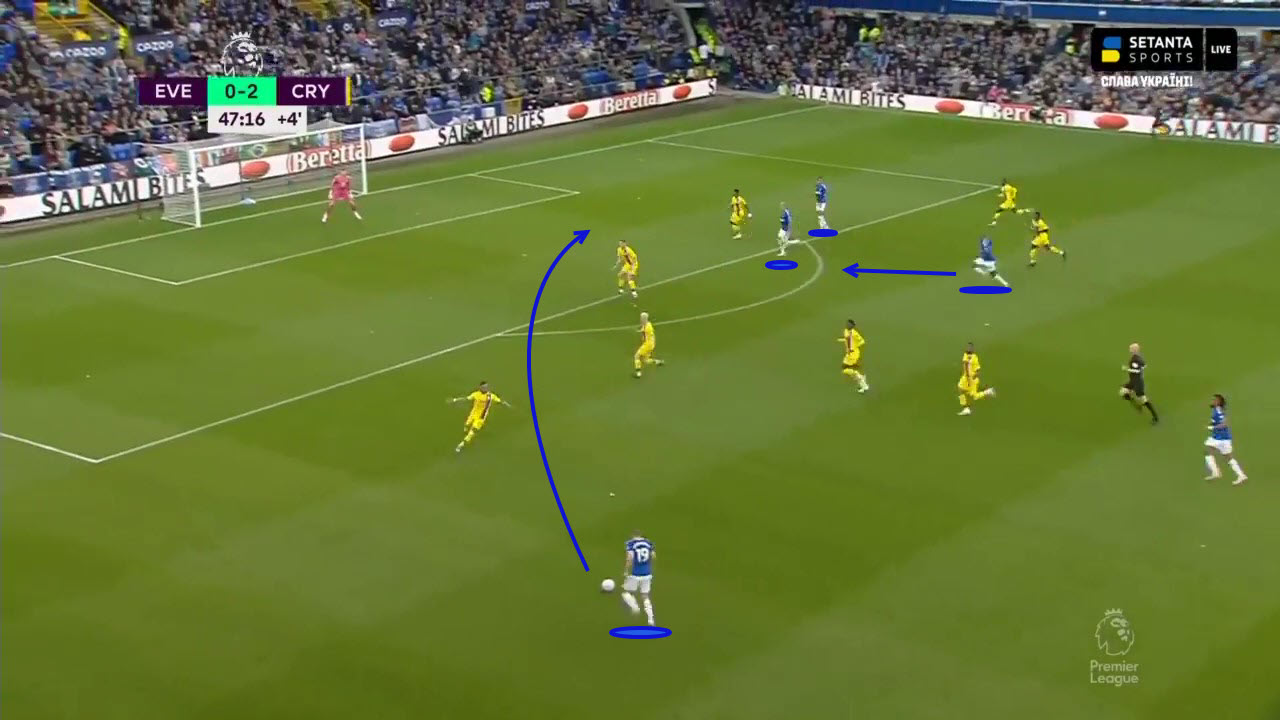 Frank Lampard sets his side up in two different ways depending on the scenario and where the ball is located on the pitch. Both variations can be classed as a mid or low block. Firstly, when defending high up the pitch Everton remains solid in their 3-4-3 formation with the front 3 stepping high and screening the opposition midfield.

Instead of pressing the opposition defence, Lampard wants his team to be conservative and remain in a structured shape. This way Everton can focus on winning the ball back in more important areas. Whilst Everton teams of the past have dominated the opposition, this Everton side had to dig in and fight for survival. Lampard’s out of possession approach ensured Everton were difficult to break down whilst also conserving energy by not pressing aggressively. 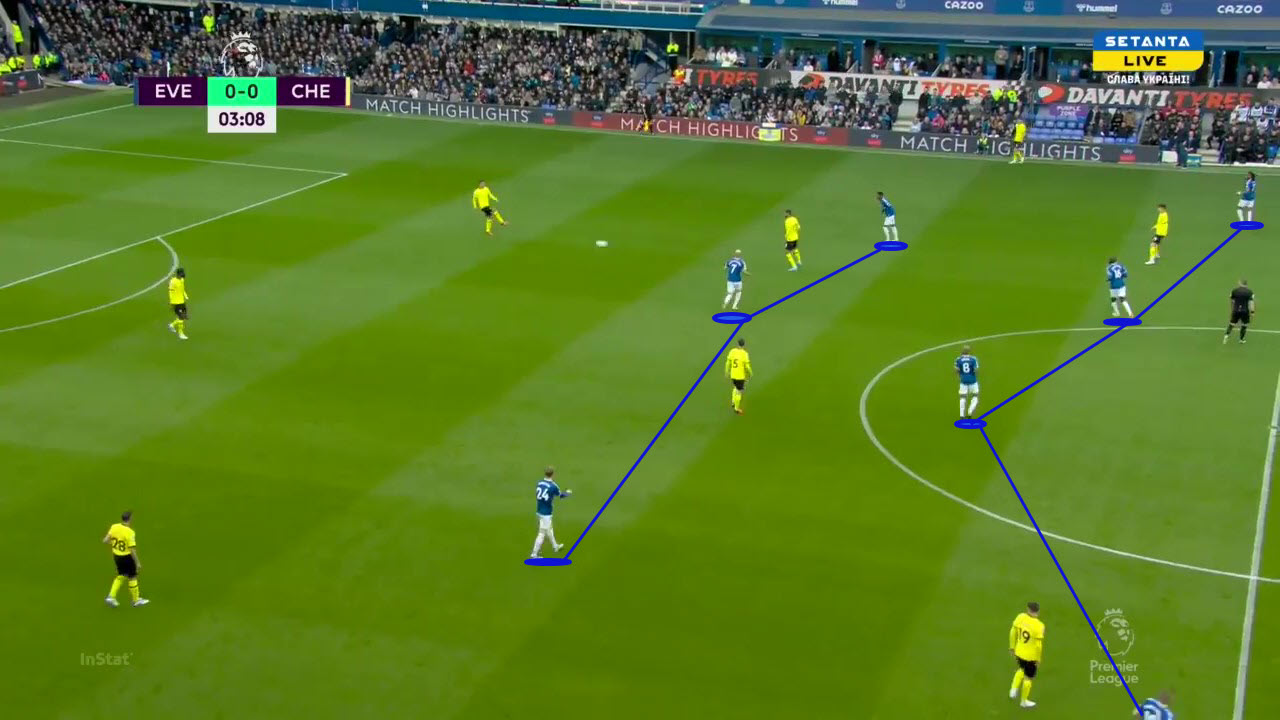 Once play has progressed further and Everton find themselves deeper, they drop into a more defensive shape. This shape, 5-4-1 enables the blues to close any space down quickly as their players are so close together. To operate like this, Everton must remain disciplined and compact. Lampard has used this tactical approach in his reign over the Toffees. By doing this, it gives Everton the highest chance of nullifying any threat from the opposition.

Key to this low block and defensive style is former Watford midfielder Abdoulaye Doucouré. His defensive discipline and ability to cover ground enable the defensive shape to remain solid. He often drops deeper to screen and block potential passes in between the back five and midfield four.

Moreover, the striker is left isolated as the highest player up the field for Everton. This role is equally as important as the rest. The striker tends to apply subsequent amounts of pressure when the opposition looks to progress the ball into dangerous areas. The striker, usually Richarlison is comfortable in dropping deep and almost creating another bank of five. The work rate of the Brazilian disrupts the opposition’s build-up as he is quick to press any loose ball. 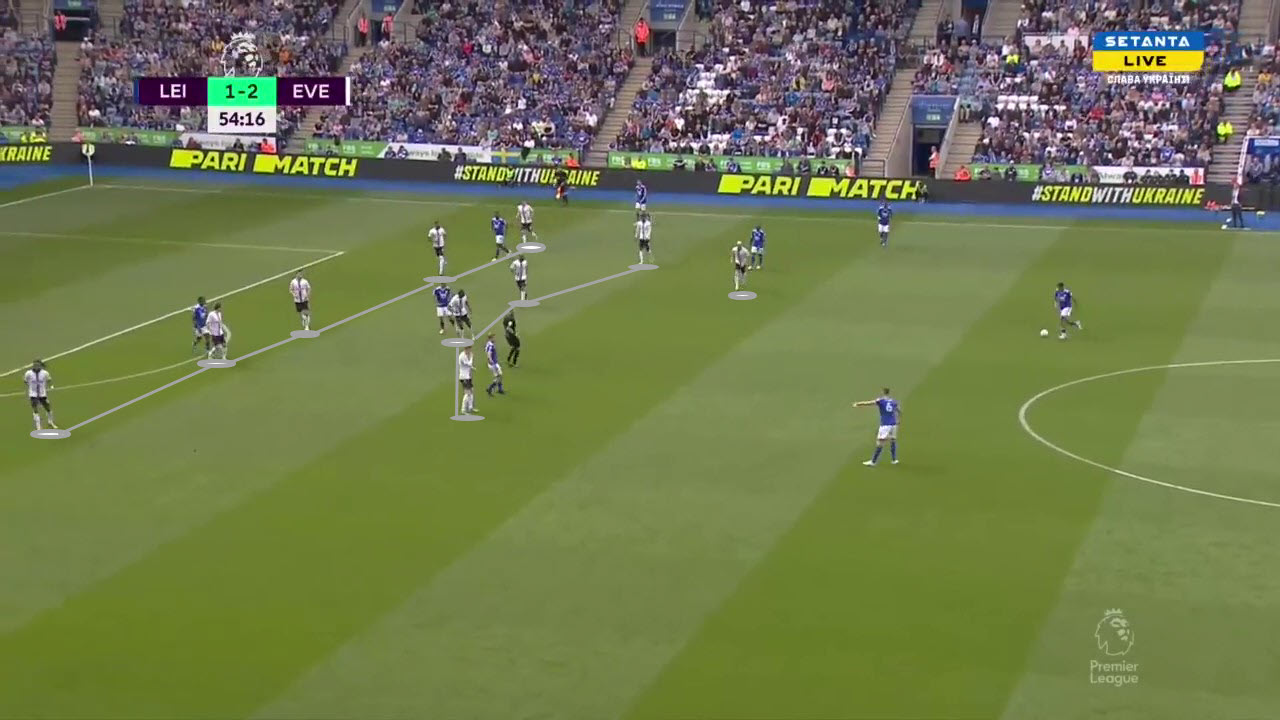 The off the ball work rate from Everton is something very noticeable. Lampard sets his side up to be aggressive when in close contact with the opposition. Defenders are instructed to follow their men, even if it means stepping into the midfield. This does leave the potential to be exposed as space will be left. However, the aggressiveness of the Everton players usually wins them the ball or worst-case delays the progression of the opposition. 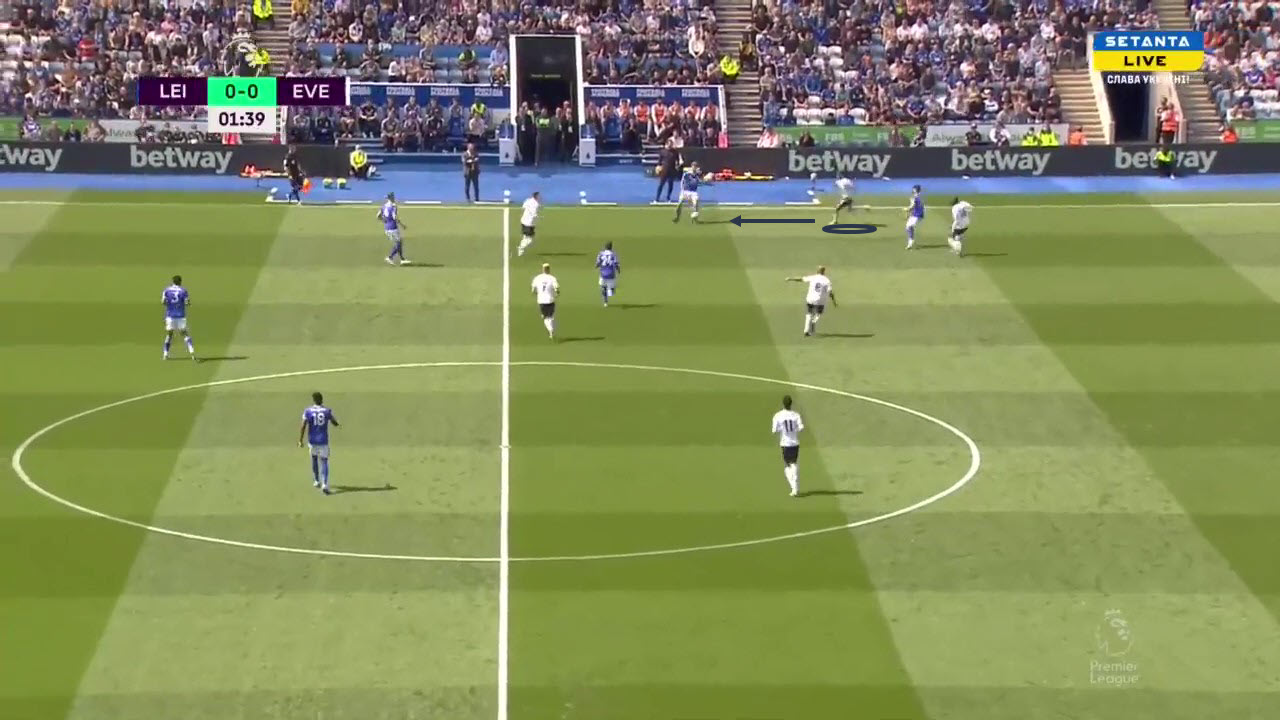 Lampard’s defensive structure leaves Everton limited with numbers up front. Following a transition, Lampard’s men are usually heavily outnumbered due to the defensive style and tactics used by the manager. When transitioning Everton look to break quickly and directly.

Richarlison is usually the furthest player forward. His first action is to drive the ball forwards by dribbling very directly. This is his only option as support has not yet reached him. When transitioning to attack Everton are quite cautious in the number of bodies they send forwards. This could be down to the fact that the position Everton found themselves in it wasn’t worth the risk of exposing themselves defensively. 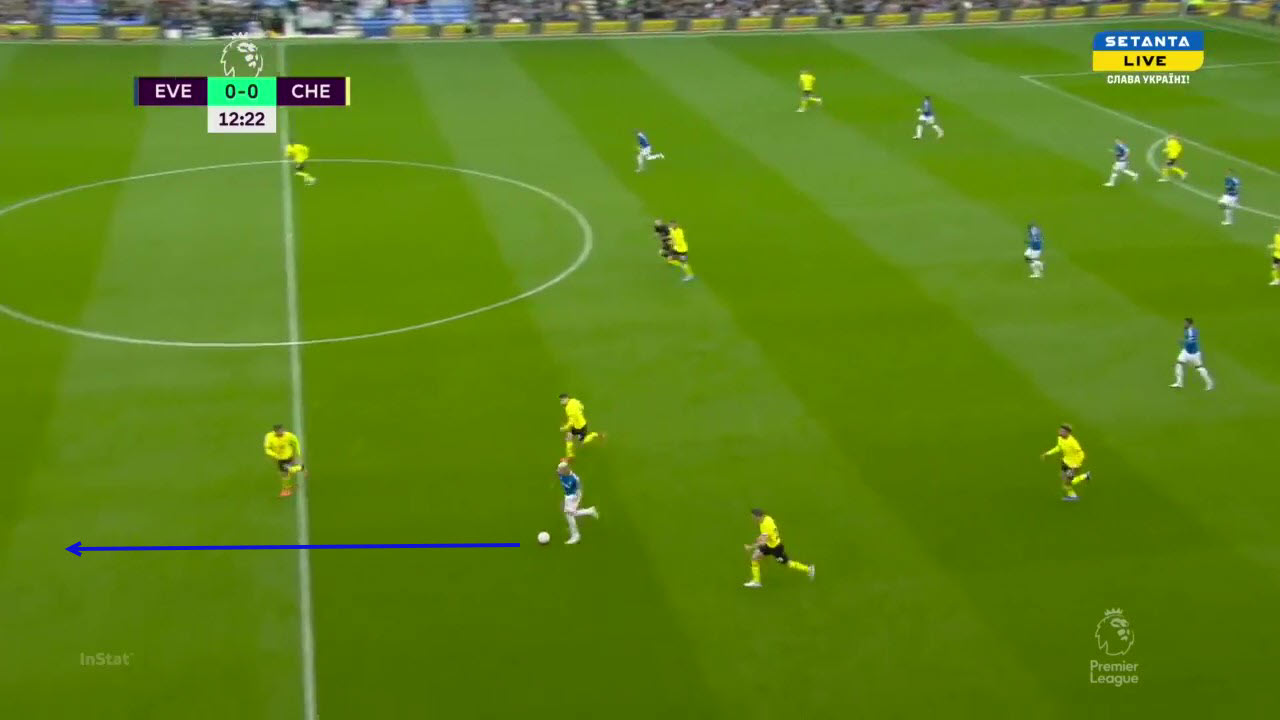 Rarely do Everton string a sequence of passes together when transitioning to attack. As seen below, there are several options for the player with the ball. However, the Everton player chose to dribble further and directly take opponents on. By doing this, if the Everton player beats a man then the numerical advantage changes in their favour. Everton ranks second lowest in the league for the number of successful through balls this season with 30.

The direct measure of dribbling is something tactical Lampard has implemented into his side. Everton are amongst the highest in the Premier League for 1v1 dribbling per 90 mins averaging the fourth most with 26.84. 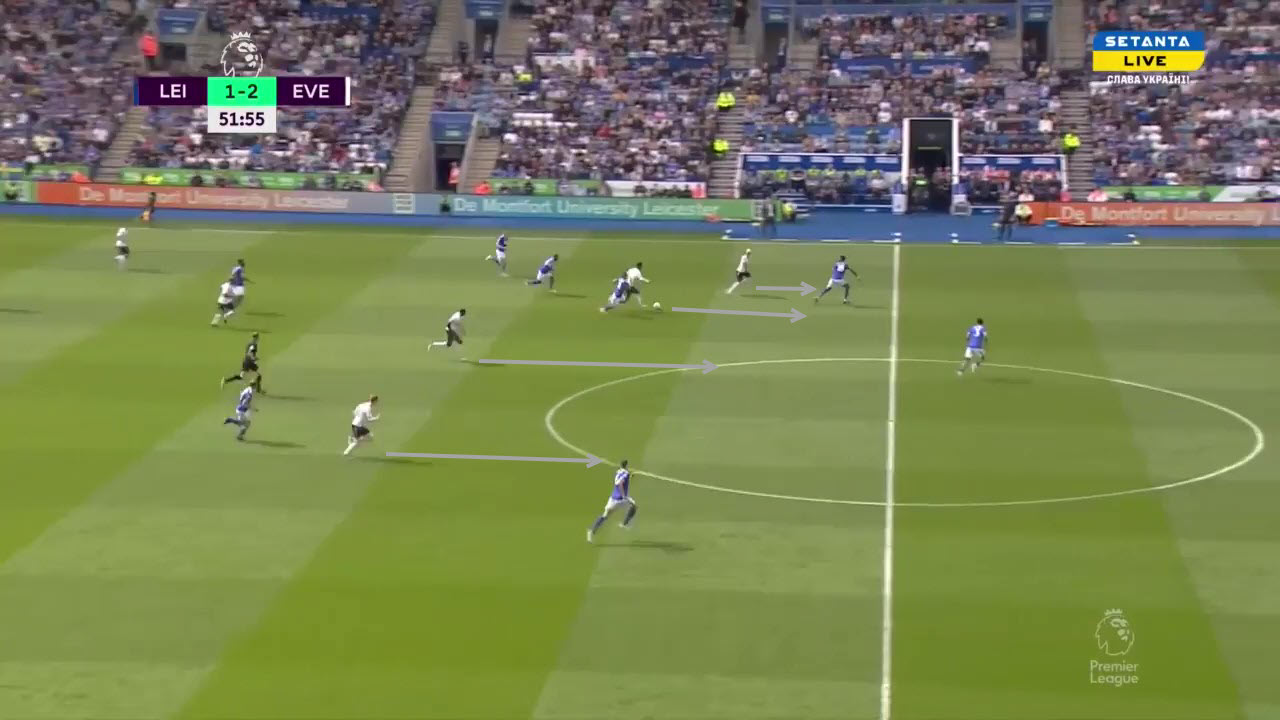 Everton’s defensive transition can sometimes cause them to be outnumbered and caught out. As mentioned earlier, Lampard wants his side to be aggressive which sometimes leads to them overcommitting men and then being at risk of a threat.

As pictured below, Everton’s midfield has overcommitted and are now out of the game leaving the back three completely exposed to the attack. Lampard wants his side to be proactive and if they lose possession in their half then it is a clear tactic of his to counter-press. However, this is risky as there can sometimes be not enough time, space or men to back this press leading to a situation like the one below. 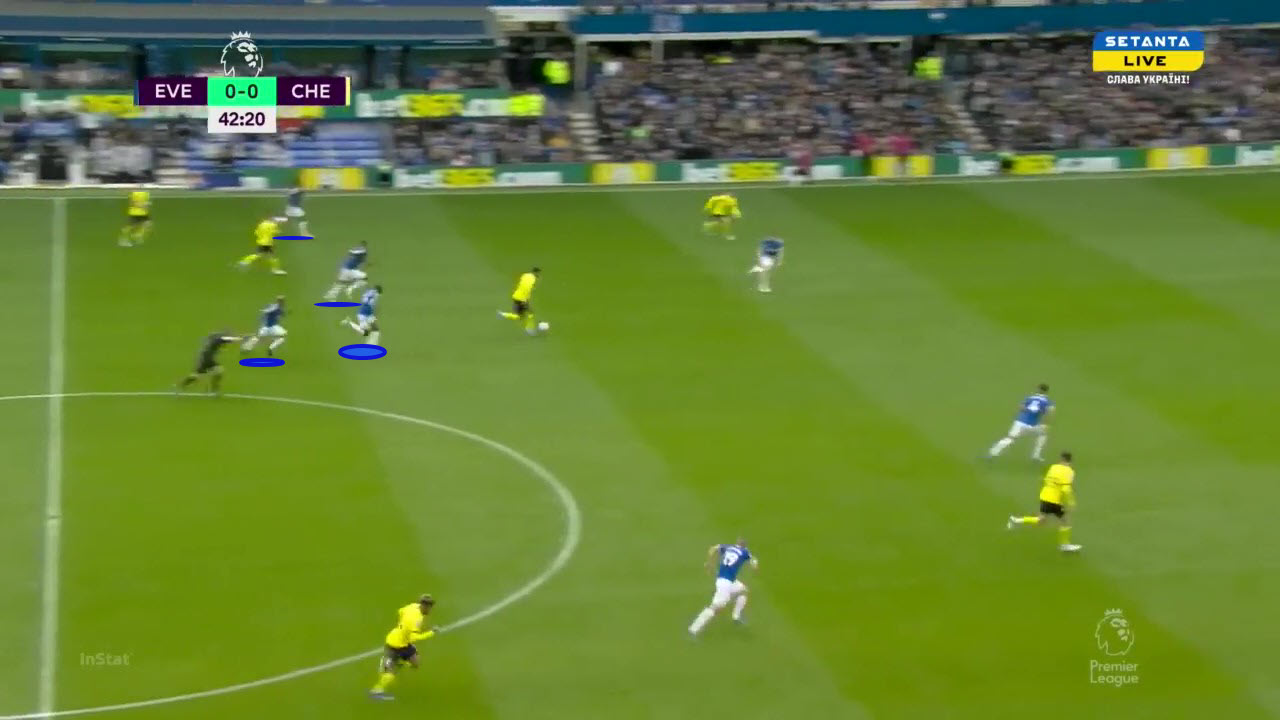 Overall, Frank Lampard has made Everton more organised out of possession. His out of possession tactics are perfect for the players he has at his disposal. The shift of Alex Iwobi to wingback has proved a master stroke as the Nigerian has hit some form recently. The structure of the midfield and defence means Everton are no longer a pushover. Every player knows his role and job, and the fight and desire shown in during the run-in proved vital for Everton’s survival.

Leading onto the 2022/23 season, Everton fans should be optimistic. With the addition of a few new players and the retention of strikers Richarlison and Calvert-Lewin, the Toffees should be challenging for a European spot. Frank Lampard has found his style in Merseyside and is looking to build on his philosophy. 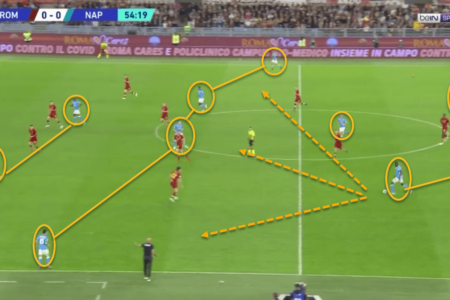