It is not all that long ago that the recruitment department at Liverpool were getting criticised for signing the likes of Giorginio Wijnaldum, from Newcastle United, and Andy Robertson, from Hull City, despite both players being involved with teams who ended that season being relegated. As we now know, thanks to the benefits of hindsight, these signings worked out extremely well for Liverpool.

So, the lesson is simple. Sometimes within recruitment, we have to be able to look past the context of team performance in order to assess a player’s suitability for our club. This may sound like something of a mixed message as I have previously written fairly extensively on the fact that context is crucial within football recruitment. What we have to do is be able to understand and find the balance between understanding how the team context can influence a player’s output (if a team does not play out from the back then we have to understand that when assessing a central defenders ability to play out from the back) whilst also understanding that players within a team system can be assessed outside of their overall team context.

In this article, we will turn our attention to the Romanian top-flight and our data set includes all players within that league who are aged 28-years-old or under. We use data from Wyscout that is then converted to percentile rankings and into pizza charts using Python while the raw data is used to convert % rankings and displayed via ranked bar charts in Tableau.

First up we will look at how involved players are in terms of scoring and assisting for their team. To do this we use fairly simple calculated fields within tableau to find the % of the total team goals that they have either scored or assisted. This is a technique that allows us to quickly find players who are performing well in the attacking phase of the game.

At the top of our ranking comes the Universitatea Craiova winger Andrei Ivan who has scored or assisted 24.5% of his team’s goals in the league so far this season. Next is Florin Tanase of FCSB with 23.56% contribution to total goals and then Rares Illie, a 19-year-old, at Rapid Bucharest who has 23.31% involvement.

While in this example I have used goals and assists you can use similar techniques to assess contributions to any metric that you have access to. This is particularly helpful for assessing different positions.

Next we will use the same technique in order to find players that are contributing highly in terms of xG and xA to their team’s total xG for the season so far. This allows us to isolate the players who are performing well in terms of chance creation or shooting positions who may not be performing as well in terms of raw outputs in terms of goals and assists.

Once again Andrei Ivan is at the top of our ranking with 24.23% next is the Farul Constanta striker Jefte Betancor on 24,18% and then we have Florin Tanase of FCSB once more on 23,33%. Crucially when using rankings like this you can add extra information. I always have position, age, minutes played and contract expiry information added in. This allows you to add some context to the players who are further down the rankings.

Finally, we are using progressive actions (progressive passes + progressive runs) to assess how involved players are in moving the ball forward for their respective teams. You’ll notice immediately that the positions of the players at the top of our rankings has shifted. In the first two examples, there were a lot of wide players and forwards while now we see a lot of fullbacks, central defenders or central defenders. This is purely down to the tendencies of the players in these positions to have more of an opportunity to progress the ball.

Top of our ranking this time is the 25-year-old CS Mioveni left-back Daniel Serbanica who is responsible for 16.65% of his team’s total progressive actions. Next is the central midfielder Eder Gonzalez of Sepsi on 14.81% and finally we have Ricardo Grigore, a 23-year-old central defender, for Dinamo Bucharest at 14.64%.

This particular ranking is also something that I would use as a part of opposition scouting as a simple dashboard would allow you to plug in the data for your next opposition and you will quickly get a sense of where the danger players are in terms of progressing the ball forward.

Now though let’s take a closer look at some of these players. 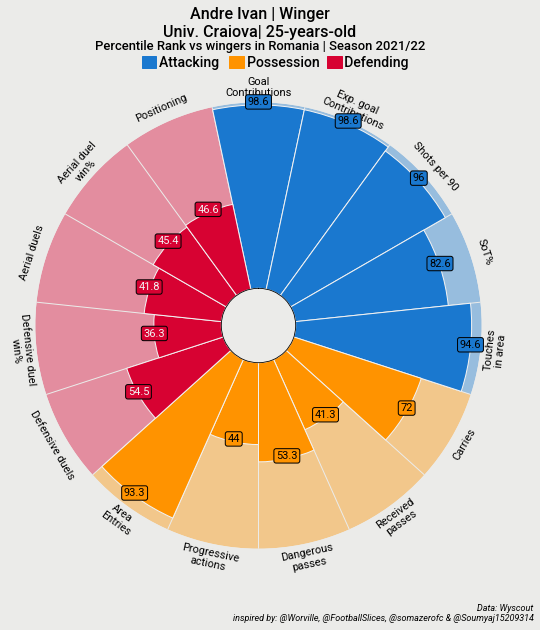 In these pizza charts, I have a number of metrics, like dangerous passes and carries, that are not immediately available within wyscout. They are created by combining key metrics in order to provide additional context within the data set. As you can see at first glance Andrei Ivan is having a very, very strong season so far in front of goals. His output for all five attacking metrics that we use for our forward profiles. He is a goalscorer who gets into great positions and takes a high volume of shots. He is less impressive in the passing and progression phase but the fact that he tends to occupy high positions means that his output for area entries (crosses + passes into the area) are also very impressive.

Now, we know that he is very involved in terms of goals and chance creation for his team and we have a well-rounded picture of his profile.

At 25-years-old with a contract that expires in the summer of 2023, he is a player with a profile that should attract some interest this coming summer. 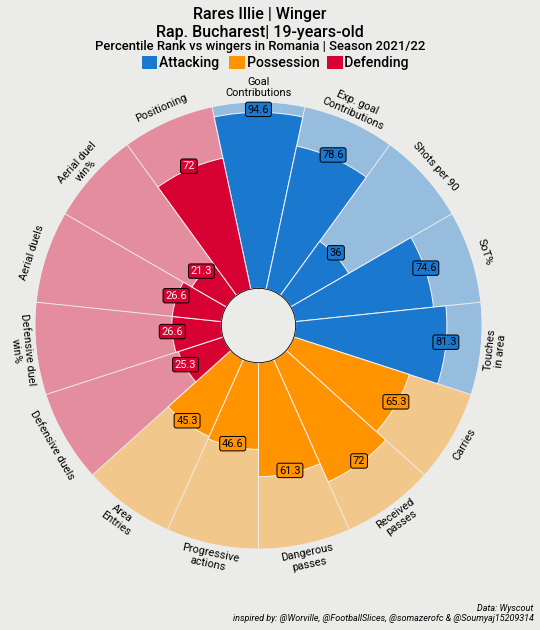 Next up we have the youngest player of the three that we will discuss in the 19-year-old Rapid Bucharest winger Rares Illie. We already know that he is contributing to 23.31% of his team’s goals so far this season and we can see from the attacking section of his profile his high output for goal contributions further enhances this.

It is interesting if you look at the profiles for Ivan and Illie that even though they play in a similar position their tendencies and outputs are very different. Illie is more dangerous when carrying the ball and he progresses the ball and finds dangerous passing options more readily than Ivan did.

Transfermarkt does not have contract data for Rares Illie but his profile combined with his age should see interest building in him throughout the summer transfer window. 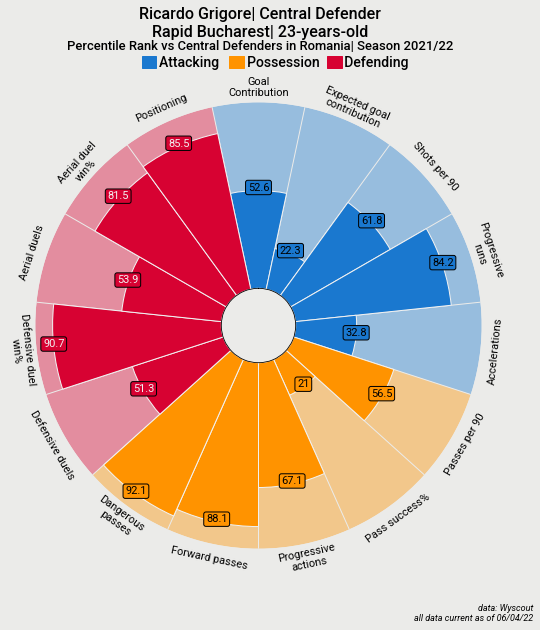 With the profiles for central defenders, you will see that the area that we are assessing them in, and the metrics, change.

Ricardo Grigore is a young central defender with an interesting profile. His defensive outputs in particular look good and although he is not stand out in terms of the volume of defensive duels and aerial duels this is to be expected given his high output in terms of positioning. It is also worth noting that Grigore has a strong output in terms of the % of successful defensive and aerial duels. In other words, his positioning allows him to not have to engage in a high volume of duels but when he does have to he tends to be successful.

It is clear that when we are working within football recruitment the ability to build custom metrics and approach player identification from different angles is key to gaining insights into players within our markets. The use of % rankings, percentile rankings, and custom metrics are a few ways that we can look at players and use widely available metrics to build models and profiles that are bespoke and unique to our clubs.