How important is context in player recruitment?

Context is everything when we discuss player recruitment, right?

When we examine transfers with the benefit of hindsight we decide whether a transfer has been a success or a failure. This is perfectly normal and even more so in the information age when everyone shares their opinions on social media. But we need to add context into the discussion even at this stage. If two players were signed before the season and each scored 15 goals but one was playing for Liverpool, where chances are created for fun, and the other scored his goals for Norwich, where chances are at a premium, which one was the better signing within that context? Well it is difficult to say that either player was a failure, they both scored 15 goals after all, but there is no doubt that the player at Norwich had the biggest impact on his team.

See, context is important. When working within recruitment I have tended to extend that recruitment to searching for players throughout Europe and one of the biggest questions when doing this using data is how we can account for the strength of the particular league we are looking at? Let’s go back to the first question but adjust the narrative slightly. Player one has scored 15 goals for Banik Ostrava in the Czechia top-flight while player two has scored 15 goals for Rapid Wien in the top-flight of Austria. Which one should I be most interested in? Well, probably both because goalscorers are so hard to find. I would put work into both to understand more about them. The truth is, however, that the real answer to that question is dependent on where you are working. For me, working for Aberdeen in the SPFL I have a much broader scope in terms of leagues that interest me but for the purpose of this article, I have actually appointed myself as the head of recruitment for a team in the English Premier League. Wait, I haven’t actually picked a team, let’s go with Leeds United.

Now, at Leeds, the truth is that I might retain some slight interest in the striker in Czechia but the player in Belgium is of more immediate interest to me. Why is this? Because the Premier League is hard and when recruiting players we want to target players that we think will have a chance of performing well at our level. The top-flight of Austria is typically very quick and aggressive and as such players that are performing there should translate over to the Premier League, right?

Well, yes and no. While there is no doubt that the domestic league in Austria is objectively better than the league in Czechia the real question is how much better?

Over the last couple of years, I have tried various methods of weighting leagues in order to try to normalise data and show the potential impact a player’s transfer from one league to another have had. I will, however, keep that information to myself for now.

I thought I was on to something and that I had a system that would allow me to recruit across a wide range of leagues effectively.

What happened yesterday? Well, I was listening to a new podcast. The podcast in question is “A podcast about tactics” a new creation by the excellent Jon Mackenzie. I should probably tell you at this point that in order to access the latest podcast here you will have to sign up for their Patreon service but it is well worth the price. In this podcast, Jon was talking to Tiago Estevao who is currently contracted to a Serie A club as a scouting and recruitment analyst. The key point for me came when Tiago was discussing context and at this point, I will be paraphrasing to give you the general idea (apologies Tiago or Jon if you are reading this). The issue around weighting leagues was being discussed and Thiago suggested that while this is a consideration it is perhaps more important to look more closely at the context of the clubs within those leagues.

Ok, so maybe the league weighting thing is still important. But now we have a new way of thinking about the use of data and viewing players. Let’s understand the context of a team within its own league to then understand whether players who play there would be suitable for our team. Let’s take the SPFL for example. At Leeds United, I am less likely to be interested in a player at Dundee or St Mirren who is performing well but if they are at Celtic or Rangers and performing well they might be able to translate their performances across more easily, right?

Let’s take a look at this idea in more depth. I should point out at this stage, however, that this is not a recruitment project or dossier and when I mention players within this article I am not suggesting that they should be targetted and signed by Leeds or any other Premier League team. Instead, I wanted to take the opportunity to look at a case study to examine this idea more closely.

To start with we need to understand our own club and to do this I will be using percentile rankings to provide a visualisation showing how Leeds are performing across a number of key metrics in relation to league average. 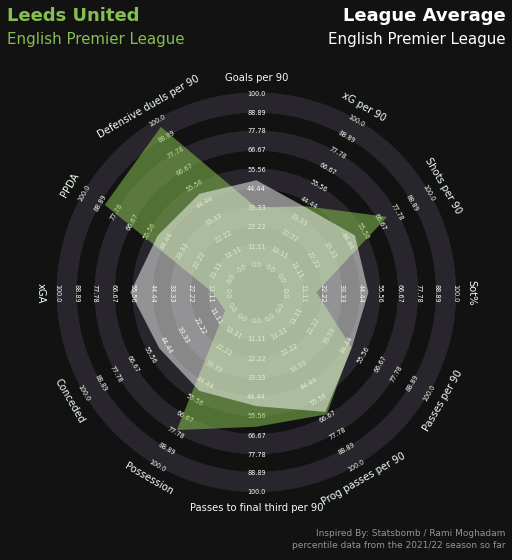 Sorry Leeds fans. Look, we know that things haven’t been going well this season and the above radar should probably come as no real surprise. In terms of goals, xG, Shots on target%, Goals conceded and xGA we can see that Leeds are performing below league average. Their defensive section is interesting as their goals conceded and xGA are really poor while they are well above league average for their PPDA (passes per defensive action, a pressing metric) and defensive duels per 90 are far above league average.

So, looking at the above the fun thing is that from a recruitment perspective we can see that Leeds need help in almost every key phase of the game going forward. Now, let’s look at a couple of individual clubs in the markets that we talked about above (Austria and Czechia) and let’s see how viewing them through the context of their league and their performances within that can help us find teams that might be of interest to us. First of all, Austria. 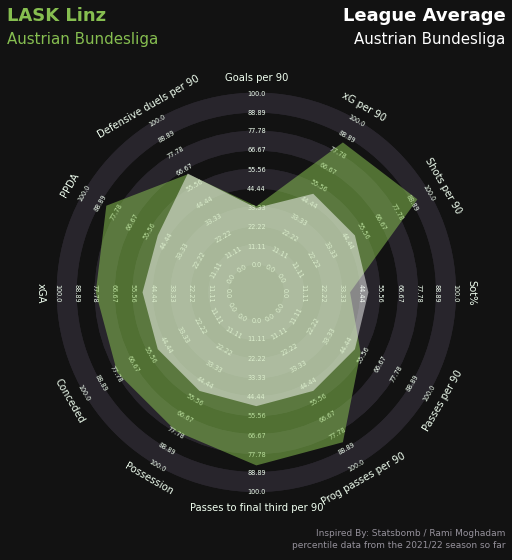 LASK Linz are an interesting club this season in that they performed well below expectations at the start of the season and at this point they are still sitting in just 6th place in the Austrian Bundesliga table. As you can see though, their data ranks them above well average everywhere apart from shots on target % and well above average in most. They are a high press side who create good goalscoring opportunities. After flicking through the various clubs within the Austrian Bundesliga they like a team where there is crossover in terms of style and performance with Leeds. But what’s the next step? 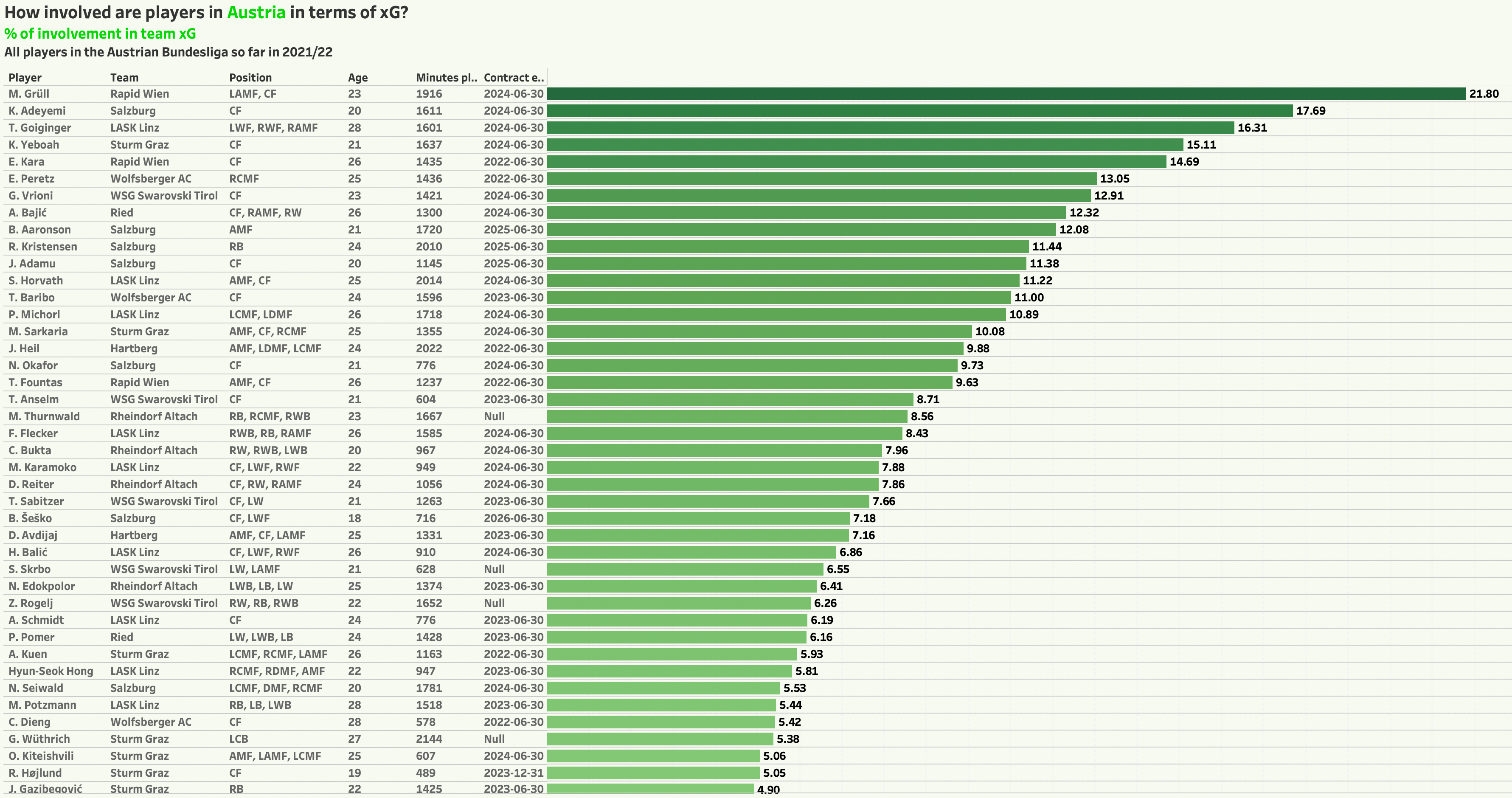 Well, next we look more closely at the player performance within that club. To do this I tend to stay away from scatter graphs, which I only use for first look talent ID these days, and instead, I use % rankings in various markets to ascertain which players within the league are the most effective for their team. The third player on the list of Austrian Bundesliga players who have contributes the most to their teams xG so far this season is a player at our target club LASK. Thomas Goiginger is a 28-year-old winger who might be a little old for Leeds to target realistically but his performances for a club that we already know are interesting are already good. So, the next step? 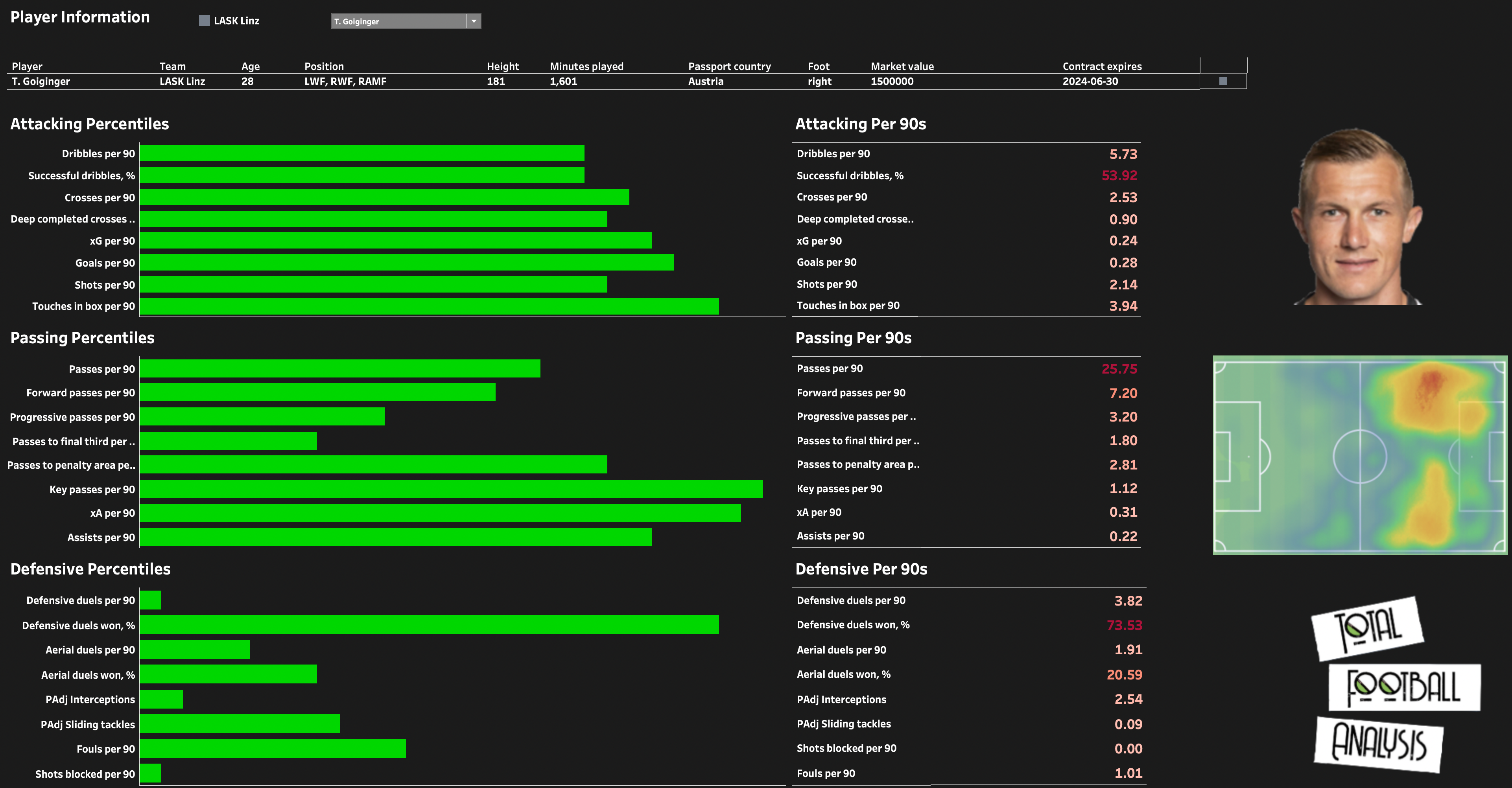 The next step is to understand the performance of the player in question so far this season through a data profile that shows the player’s individual performance across a number of key areas. As we can see he plays mainly on the left but also drifts to the right. His attack metrics are very strong across the board both in terms of taking and creating chances.

Let’s run through that again but this time with a club from Czechia. 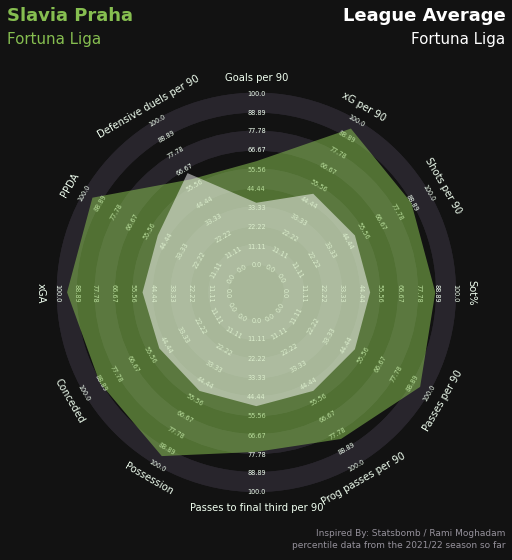 So, this time we will look at Slavia Praha, a side who are traditionally one of the best in the country but this season they are sitting in 2nd despite underlying data suggesting they should be second. As you can see from the radar though they are performing well above league average in all areas apart from defensive duels per 90. Within this context, we can expect to find some interesting players if we take a closer look. 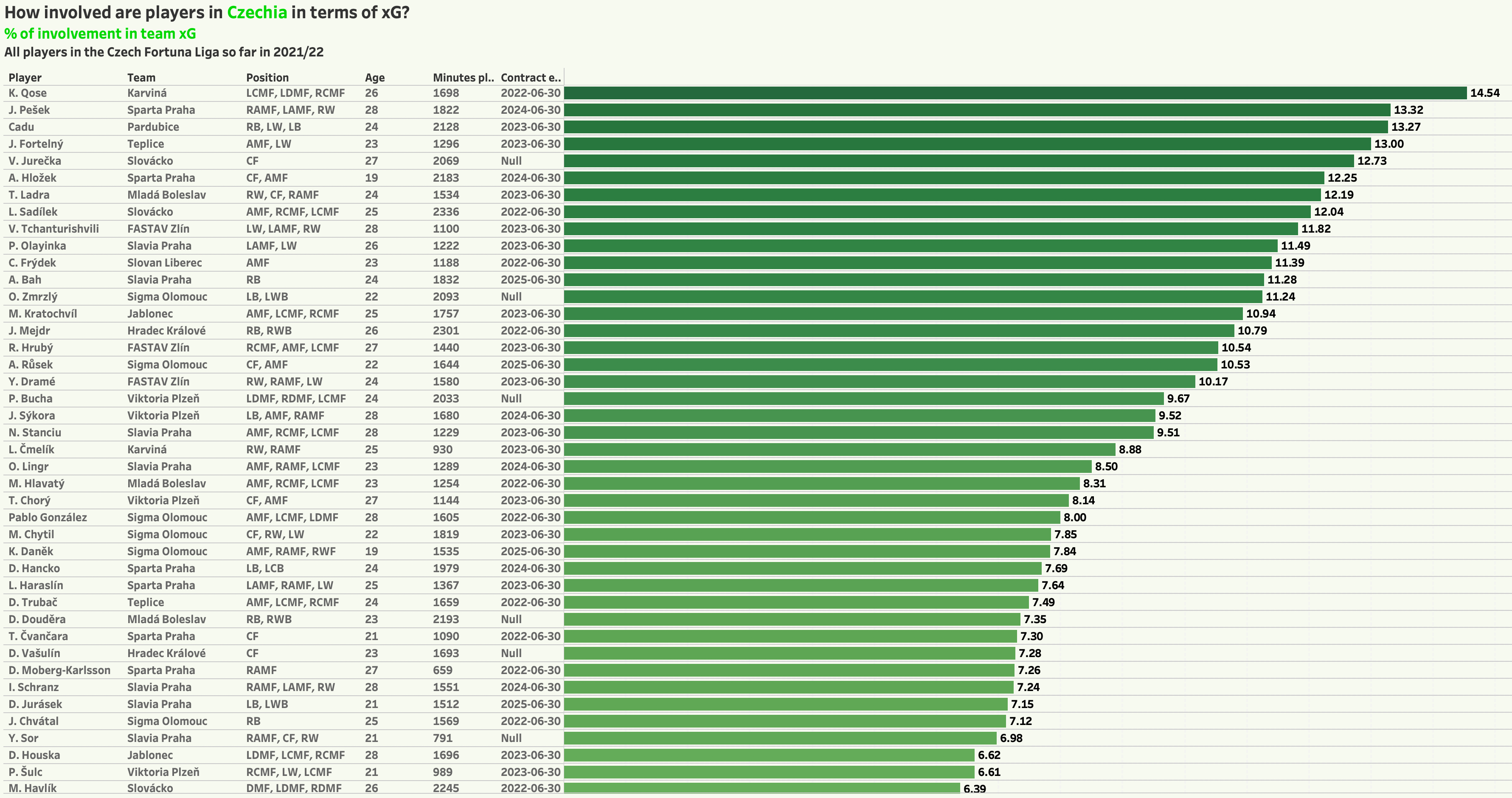 So, we use the same % ranking to assess players in this market who are contributing well to their team’s overall xG. The first player that we come across for Slavia is another winger in Peter Olayinka but this time I am also highlighting a right-back called Alexander Bah who I had actually scouted quite a bit before he moved there. Olayinka is responsible for 11.49% of Slavia’s xG while Bah, from right-back, is responsible for 11.28%. On to the next step! 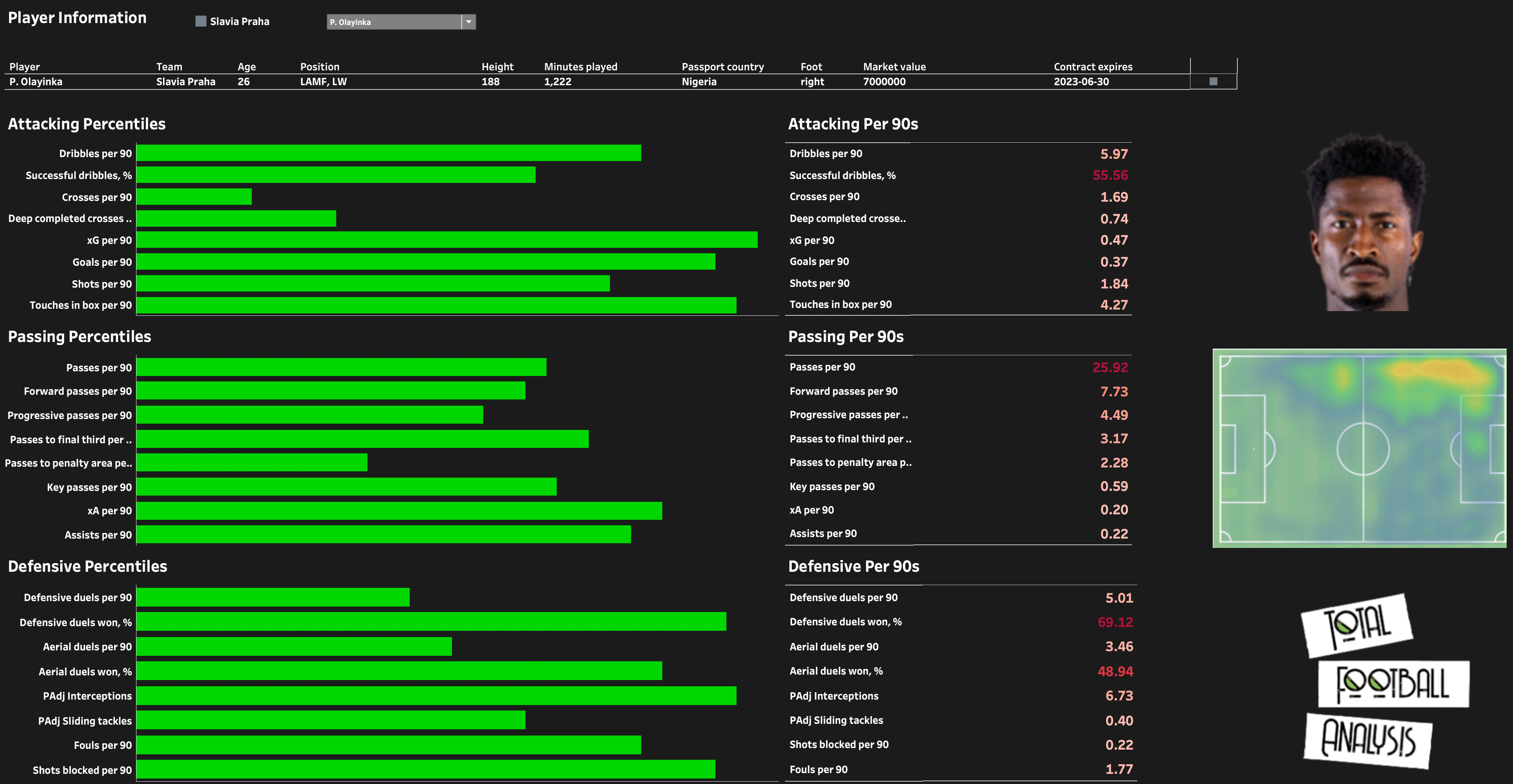 First up is Peter Olayinka who is definitely a left-winger. He is a wide player whose performances from an attacking perspective are stand out but, interestingly, he also has strong defensive metrics, which suggests that the is active in the defensive phase. 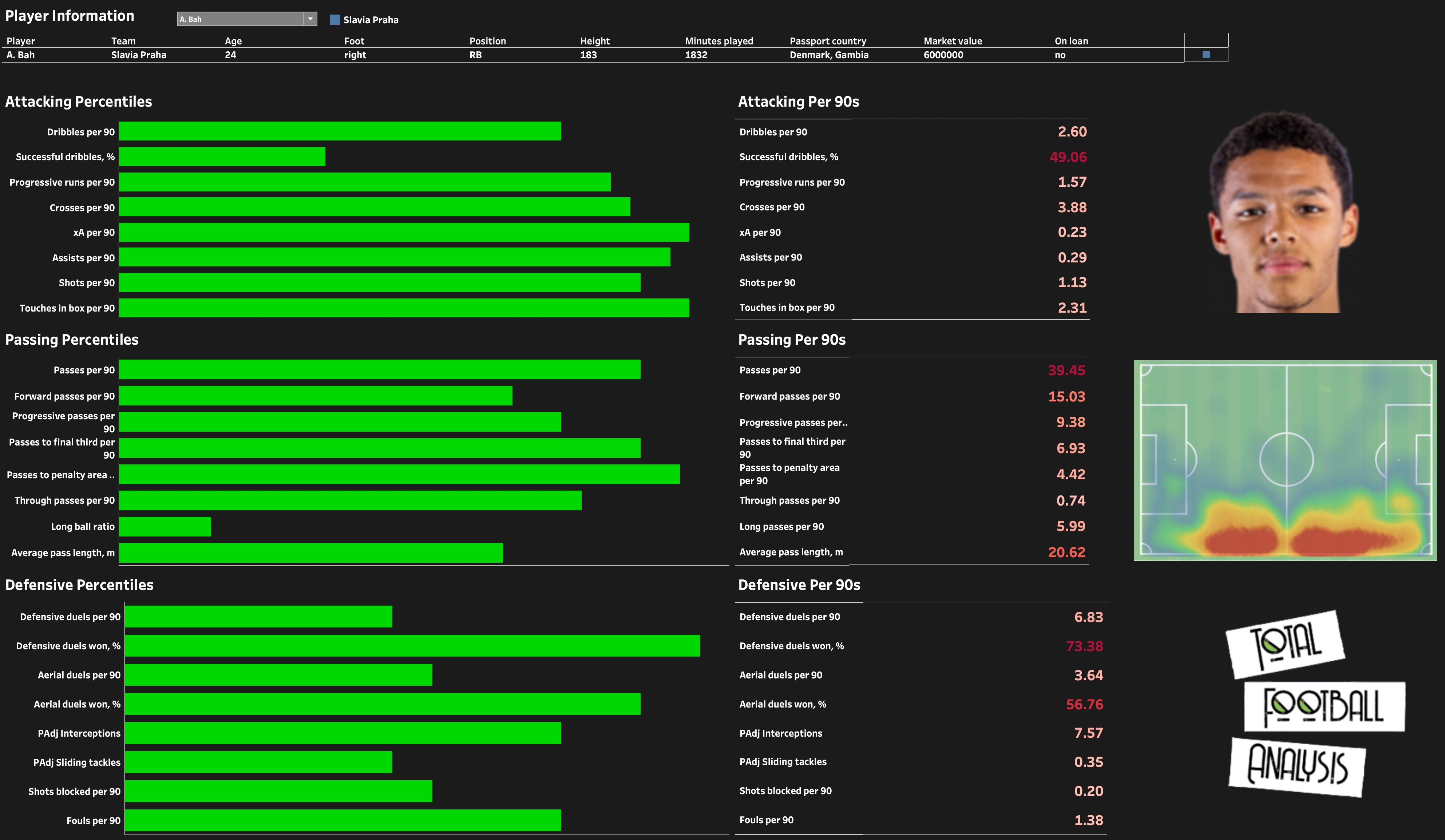 Full disclosure, I love Bah. I rated him highly when he played in Denmark and recommended him to more than one team. Now, we see some incredible outputs from the young right-back in Czechia. A right-back who can dominate his flank in all phases of the game. Should he be on Victor Orta’s famous list, maybe?

So, what have we learnt? The main takeaway for me is that no matter how much you think you know there is always room to learn more. This new development in my own scouting has added new levels and sections to my own processes and workflows. Will it do the same for you? Let me know.