After six years in the Germany, Georg Teigl returned in this summer back to Austria. He started his career as a professional football player at RB Salzburg and then moved to RB Leipzig back in 2014. However, he was not able to become a regular starter for Leipzig and left to play for Augsburg and Eintracht Braunschweig.

Austria Vienna had ahead of the 2019/20 season the plan to be among the best teams in Austria’s Bundesliga and reach the qualification rounds for the UEFA Champions League or the UEFA Europa League, but in the end, they had a disappointing season. Therefore, the former coach of Borussia Dortmund, Peter Stöger, who was already during the last season the Director of Sports became additionally to this role also the new head coach.

In this tactical analysis in the form of a scout report, we will look at the Austrian’s qualities and how Teigl will fit into the tactics of the new manager Stöger.

Teigl played in the opening game in the Austrian Bundesliga 2020/21 of Austria Vienna against LASK Linz only 28 minutes as he got subbed on to replace the left-back Christoph Martschinko. Throughout his career, the Austrian played as a full-back, wing-back and winger. He is clearly a player who can make the most out of his abilities when he plays in the wide-areas. However, the fact that he can be used as a full-back as well as in a more offensive role as a winger is one of his greatest strengths.

Since he is a right-footed player and likes to go down the wing and swing in crosses compared to cutting to the inside, his preferred side is clearly the right one. However, he showed in his first competitive match for Austria Vienna against LASK Linz that he is also able to play as left-back. He had to adapt his game in some situations, but basically, he did quite well. In the image below, we can see him as left-back in the 4-2-3-1 which was the preferred formation of Christian Ilzer in the recent season and in the first ÖFB Cup fixture and opening matchday in the Austrian Bundesliga the new coach Stöger also went with that formation. 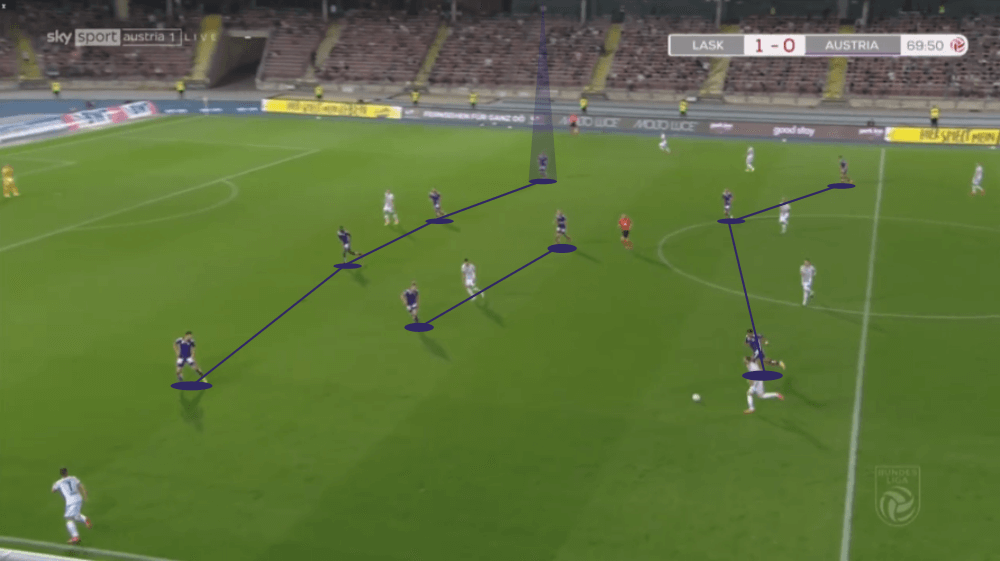 Teigl’s two greatest strengths were always his physical abilities (agility, acceleration and speed) as well as his mentality as he is ready to work hard for his team in every phase of the game. These two strengths can be perfectly exploited when he plays as winger or wide-defender. Additionally, Austria Vienna have in their squad with Christoph Monschein and Bright Edomwonyi two central forwards what means that it is unlikely that he will be used as a striker. He played in his career only on very rare occasions as a striker and we can expect that he will play under Stöger primarily as wide-defender and winger. However, he can play in the wide-area in several positions what can be a huge help throughout the season.

In this part of the tactical analysis and scout report, we will look at the strengths and weaknesses of the Austrian. As already mentioned prior in this analysis, his central strengths are his physical abilities. Since Teigl is already 29 years old, he knows what his strengths are and tries to exploit them.

Considering this, it is not a huge surprise that he tries to make the most out of his acceleration and speed on the pitch. Whenever there is space in front of him, the Austrian tries to use it with a dribble and getting forward with the ball.

He has decent technical abilities but is not that strong in going into one-on-one situations and dribbling past his opponents. Due to that, he prefers to run forward when there is the necessary space available as in the example below in which he mustn’t face an opponent. However, with his speed, he can bring the ball forward and help with the progression of the ball to enter the final third. 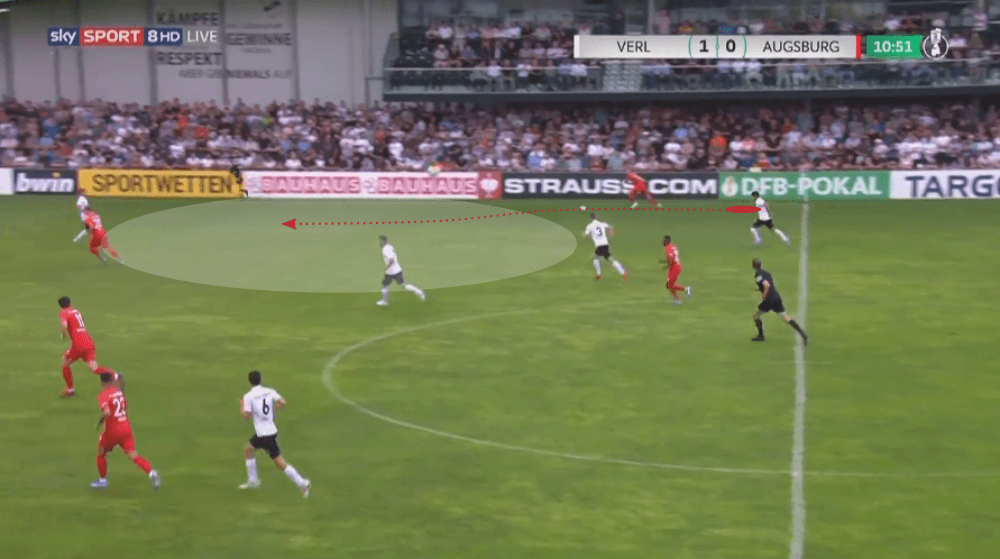 Also, since Teigl is not a player who frequently tries to beat opponents with the aid of dribbles, we can often watch him playing the ball to one of his teammates to then start a deep run and give his partner the chance to find him with a through pass. This is just another way to exploit his speed without going into one-on-one situations.

We can see such a situation in the shot below as he played the ball to the central midfielder just moments ago to then start the forward run behind the last line of the opposing defence.  With that run, he gives his teammate the option to once more find him with a through pass. 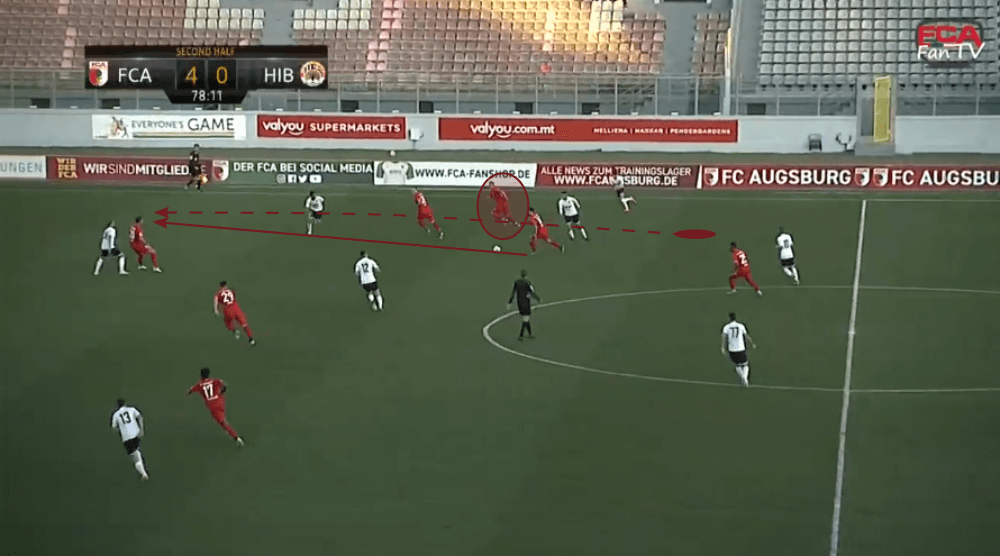 Overall, Teigl is not a player who stays on the ball for too long. Back then during the start of his career when he played for RB Salzburg together with players like Sadio Mané (Liverpool), Kevin Kampl (RB Leipzig) or Alan (Beijing Sinobo Guoan) he didn’t always find the right moment to pass the ball and continued his dribbles without success. Now, the Austrian has gained a lot of experience and his understanding of the game also massively improved.

When there is a teammate who is in a better position or makes an interesting run like in the situation below, you can expect Teigl to pass the ball to his partner. 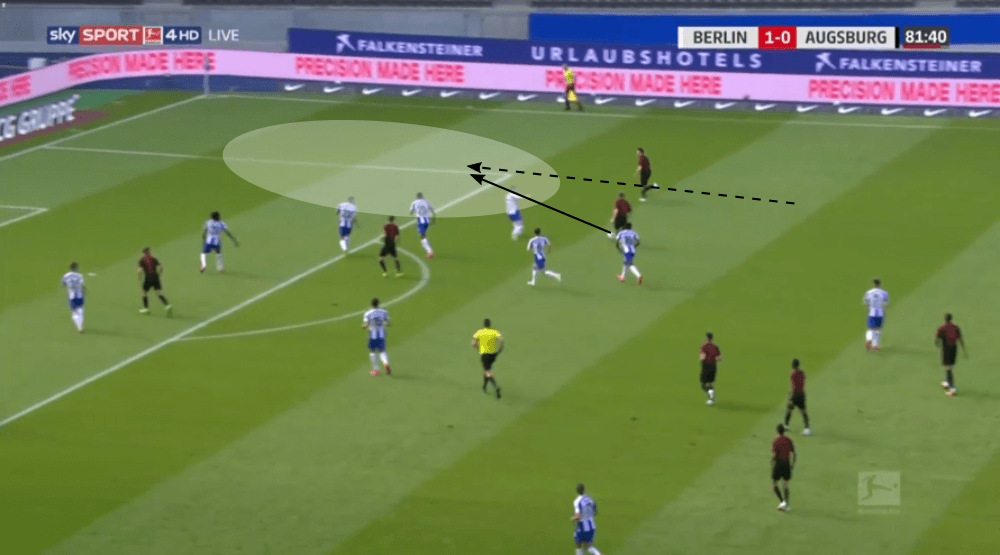 Besides the aspect that Teigl is very weak with his left foot and executes most of his actions with his strong right foot as we will see in the next part of this tactical analysis, his second greatest weakness is probably his defensive behaviour. The 29-year-old is quite sloppy in defensive duels and without his pace and physical power, he would be even worse out of possession. We can often watch him rushing towards the opponent like in the example below as he is not calm and patient enough what gives the opponent the chance to easily dribble past him as we can see in the following example. 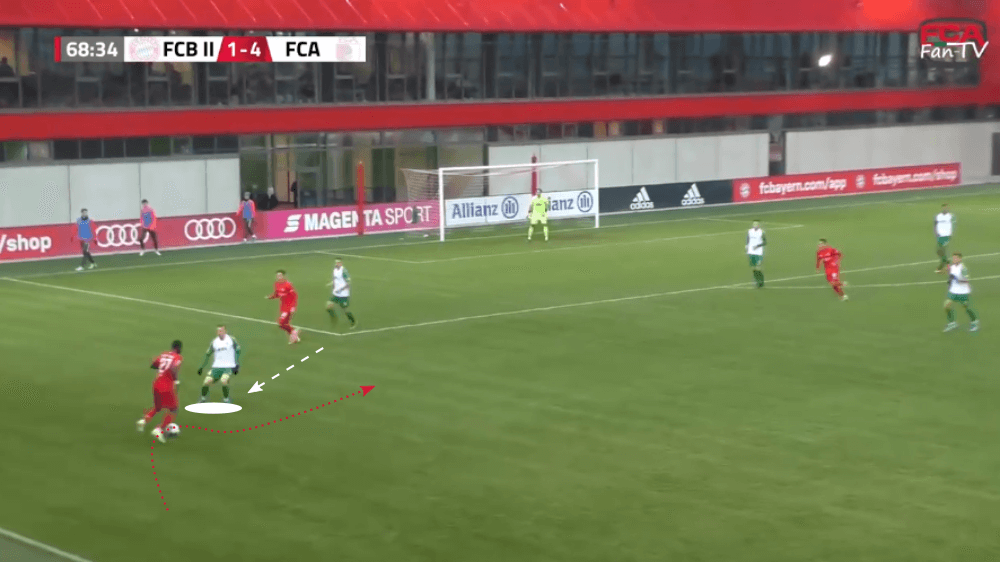 Limitations due to the lack of technique with his weak foot

In this section of the tactical analysis, we look at one central weakness of Teigl as he mainly uses his strong right foot to execute his actions since he is quite weak with his left one. This aspect is a central trait of his style of play since it influences massively his decision-making.

The 29-year-old prefers to dribble and pass the ball with his strong right foot what limits him in his actions as we can see in the example below. He could play a risky pass through the centre or start a dribble, but these actions would be quite hard to execute with his strong right foot but easier with the left one which he doesn’t want to use too often. Due to that, he goes with the simple option. 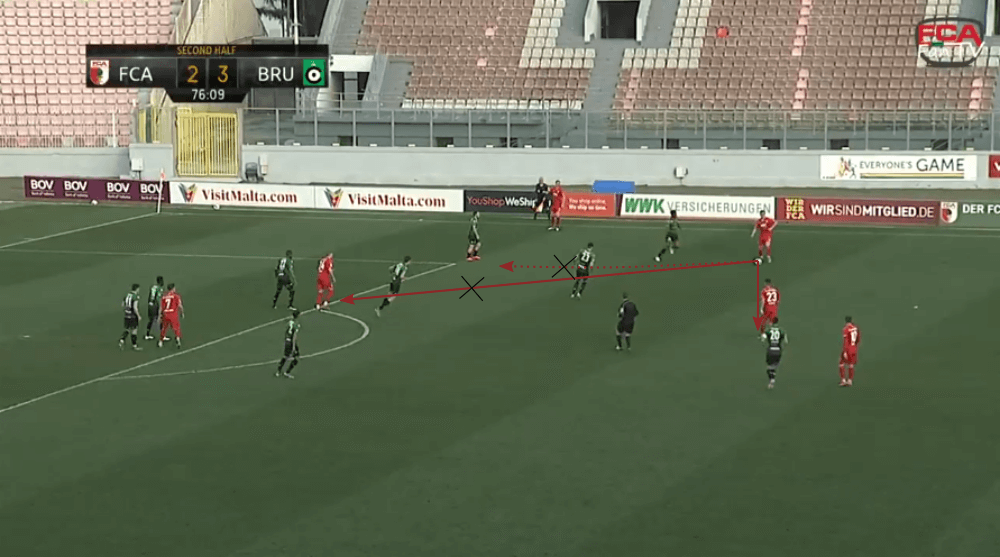 Also, it is logically not in every situation possible to avoid playing a pass or delivering a cross with the left foot since in some moments an action needs to be done instantly to create something dangerous.

It seems in those moments like this would also influence his vision since he gets a bit hectic and focuses more on the ball what means that he doesn’t detect all teammates around him. A perfect example can be seen in the shot below as he has to deliver the cross with the weak foot and doesn’t get the ball past the defender who blocks the ball. It’s questionable if he didn’t notice his free teammate in the centre or if he was just not able to find him with the left foot. 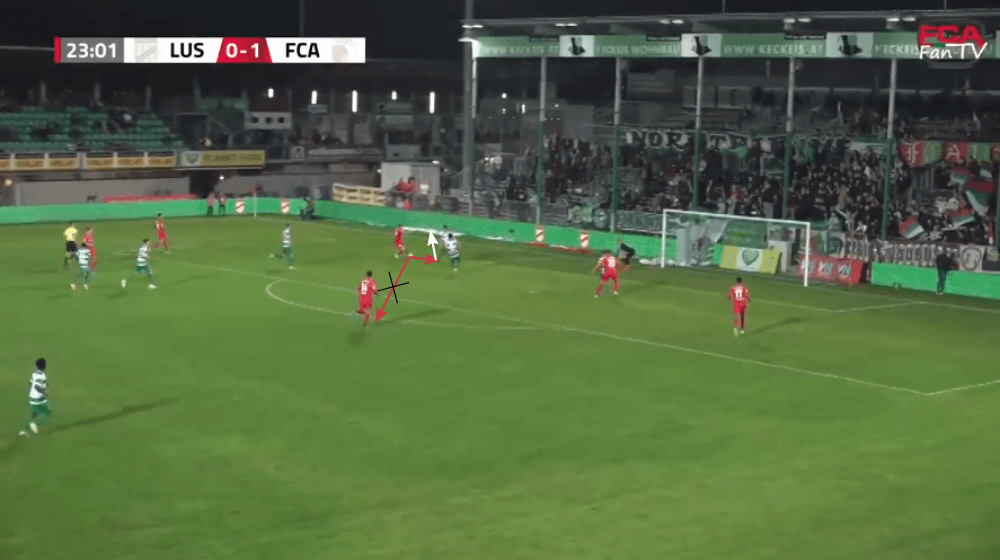 As already mentioned earlier in the scout report, this logically also influenced his performance in the first Austrian Bundesliga match of Austria Vienna against LASK Linz in which Teigl got subbed on to play as left-back. Whenever he joined his teammates further up the pitch and got on the ball, he instantly tried to go to the inside to then have several options with his strong right foot. A perfect example is illustrated below as he receives the ball from Alexander Grünwald and already curves his run to the inside before he even gets on the ball to then dribble to the centre. 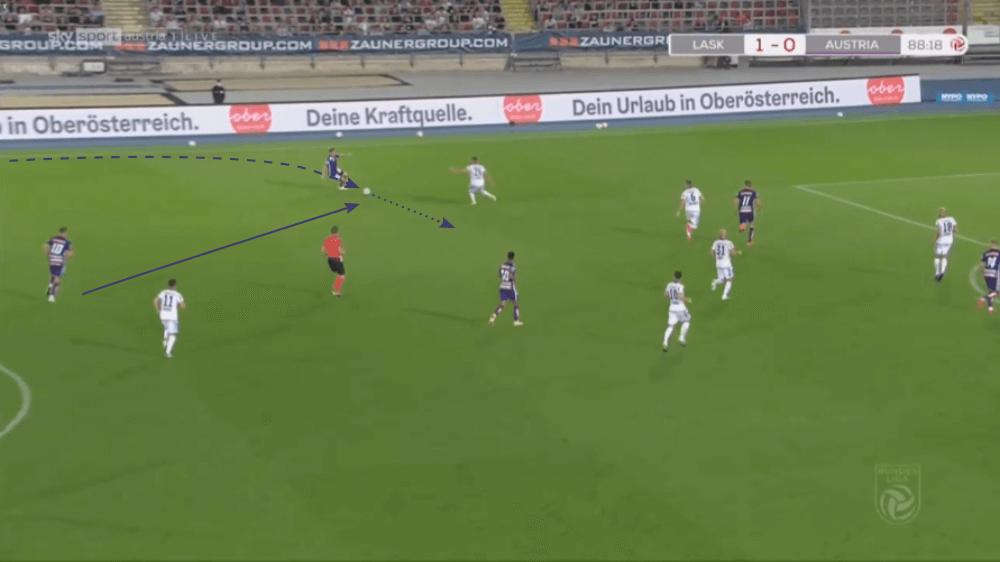 How he can help Austria Vienna

Basically, I don’t think that the plan is that the 29-year-old will play as left-back since they signed in this summer for this position Markus Suttner and have due to that with him and Martschinko two left-backs in the squad. Besides, they have with Lukas Prokop an interesting and young left-back in their second squad.

However, they have with Stephan Zwierschitz only one right-back in their team since they didn’t renew the contract of Florian Klein. Due to that, we likely see Teigl several times in this season as right-back what suits him. He needs to be more concentrated in his defensive actions, but besides that, he is perfect for this position. As right-back, he could also exploit his pace with overlapping runs and besides it is in this position not that much of a problem that he mainly uses his right foot compared to more advanced positions.

Also, they got with Benedikt Pichler, Manprit Sarkaria, Maximilian Sax and Patrick Wimmer several wingers in their squad. Therefore, we will likely mainly see him as a right-back and in some games as a winger when some of the other players need a break.

Overall Austria Vienna have with several talents a very young team and besides, several players in their second squad are on the edge to become part of the first team. Due to that, they tried to sign in this transfer window more experienced players as they brought in Suttner and Teigl.

The 29-year-old already said in an interview that he wants to be a rotation player in the squad and his new coach Stöger explained that Teigl should help especially the young players in the team with his experience. It will be interesting to see how well he can settle in at his new club.