Norwich City hosted Brighton & Hove Albion this past weekend in what was a crucial Premier League game for both sides. The reward was not only the potential points to be gained to avoid relegation but to prohibit their opponents from climbing above the loser in the table.

Seagull’s boss Graham Potter threw his hands in the air in pure elation at the final whistle as his side walked away with all three points. Potter’s side did well to hold onto their one-goal lead for 65 minutes with no reply. A testament to the character of his side to continue to play quality football in this tense affair when the stakes were high.

In stark contrast, Canaries boss, Daniel Farke knows his side let a significant three-points slip from their grasp. Both sides played with a lot of caution in and out of possession, yet it was the side that was more positive in the transition to attack that took all three points.

The tactical analysis below tells the story of the game from a tactical standpoint. Here we give you a comprehensive analysis of the tactics and key decisions executed by both managers.

Also, how key players and key moments affected the outcome of the game.

Norwich City: 4-2-3-1
Farke makes five changes to the side that fell to a 4-0 loss away to Arsenal during the week.
Alexander Tettey makes way for Timm Klose in the centre of defence, while there are three changes made across the middle. Tom Trybull, Todd Cantwell and Lukas Rupp all make way for Onel Lázaro Hernández, Ondrej Duda and Alexander Tettey. Finally, target-man Teemu Puki vacates the top spot for Josip Drmić.

Brighton & Hove Albion: 4-4-2
Potter makes four changes to the side that fell to a 3-0 loss to Manchester United this past week.
Martín Montoya, Shane Duffy, Dale Stephens and Alexis Mac Allister all make way for Adam Webster, Aaron Mooy, Leandro Trossard and Neil Maupay to round up a strong 4-4-2.

Norwich commanded a lot of the ball through various phases of the game however they did so with a lot of caution going forward. Farke’s 4-2-3-1 meant the Canaries had the opportunity to create central overloads which they did so masterfully in their build-up play. As the attack graduated to the final third of the field, without numerical superiority, Norwich struggled to create valuable chances in their possession-based approach.

The data above shows a frequent changeover of the dominance of ball possession throughout the course of the game. 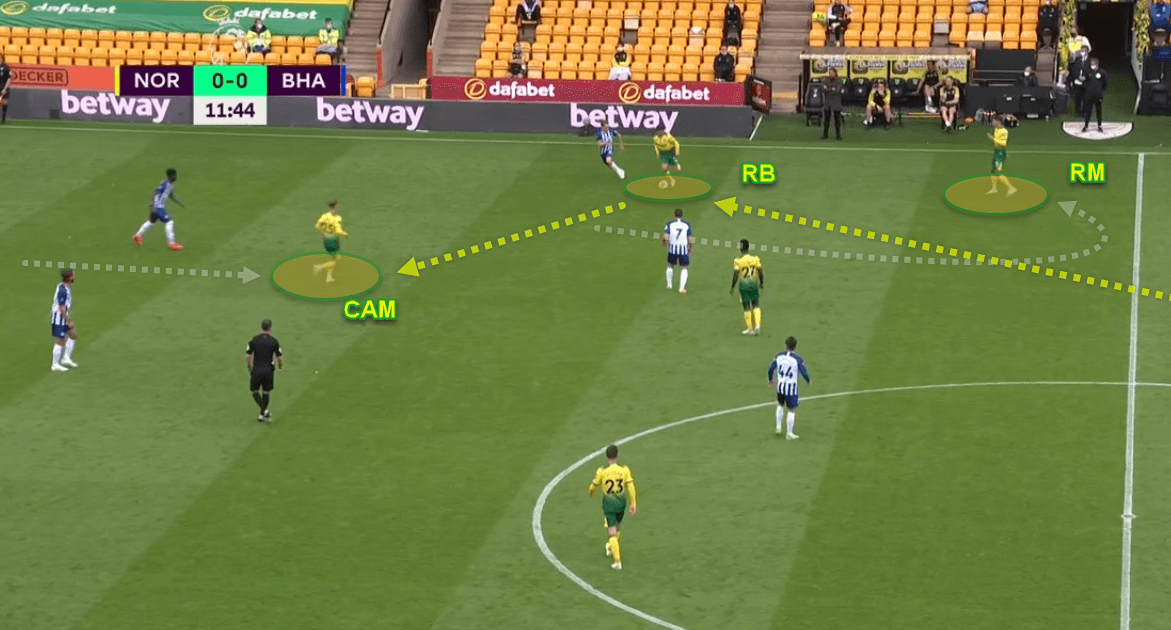 A pattern of play frequently used, as the Norwich centre-backs carry the ball into the middle third before releasing a pass forward into midfield. We see the movements commonly executed by the Norwich midfield to create passing options in the half-space and wide areas. Above, the right-midfielder and the central-attacking-midfielder playing as the no.10, drop deep to receive a pass unmarked. Should they become marked, this would mean they would free up either the right full-back or the central-midfielders to become a passing option.

The above data shows the pass network of Norwich City.
We can see, Norwich exercised a lot of horizontal passes between the centre-backs, full-backs and central-midfielder Kenny McLean. As this data accounts for the average position of each player in possession, notice how narrow the wide midfielders were in their attempt to create overloads in central areas.

The sum of Norwich attacks amounted to an xG of 0.67 with only one attempt on target from 12 shots. The Canaries caution is only highlighted by the fact that they attempted one counter-attack all game. For a side that was trailing at home by a goal for 65+ minutes, it begs the question, had Farke of thrown more caution to the wind then would Norwich have been better off at the final whistle.

The Norwich target the Seagulls’ weak-side

On the few occasions Norwich showed some invention from deep, they almost created some high-value opportunities at the edge of the Brighton box. But for lack of perfection in the long diagonal passes and the timing of the runs to beat the offside, Norwich might have claimed a reward for their efforts in attempting to breach the Seagull’s weak-side. 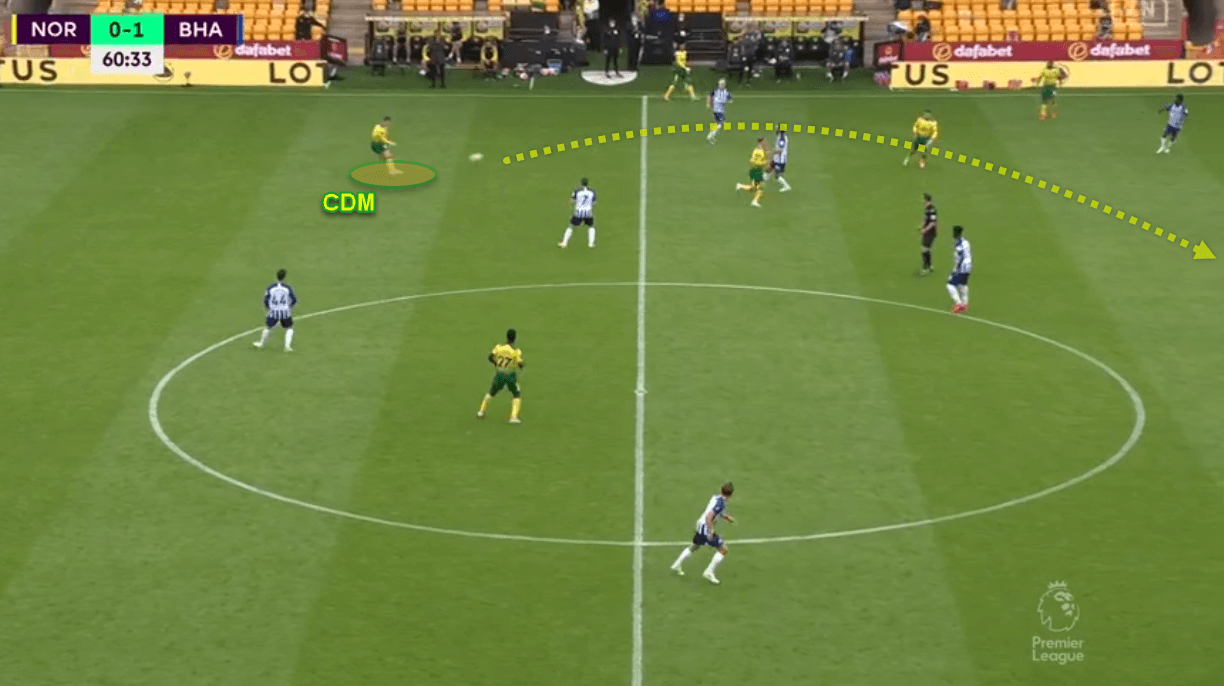 Above we see the starting move of a long diagonal pass from central-midfielder MacLean, who plays a long pass unmarked from a false-full-back position in his own half. 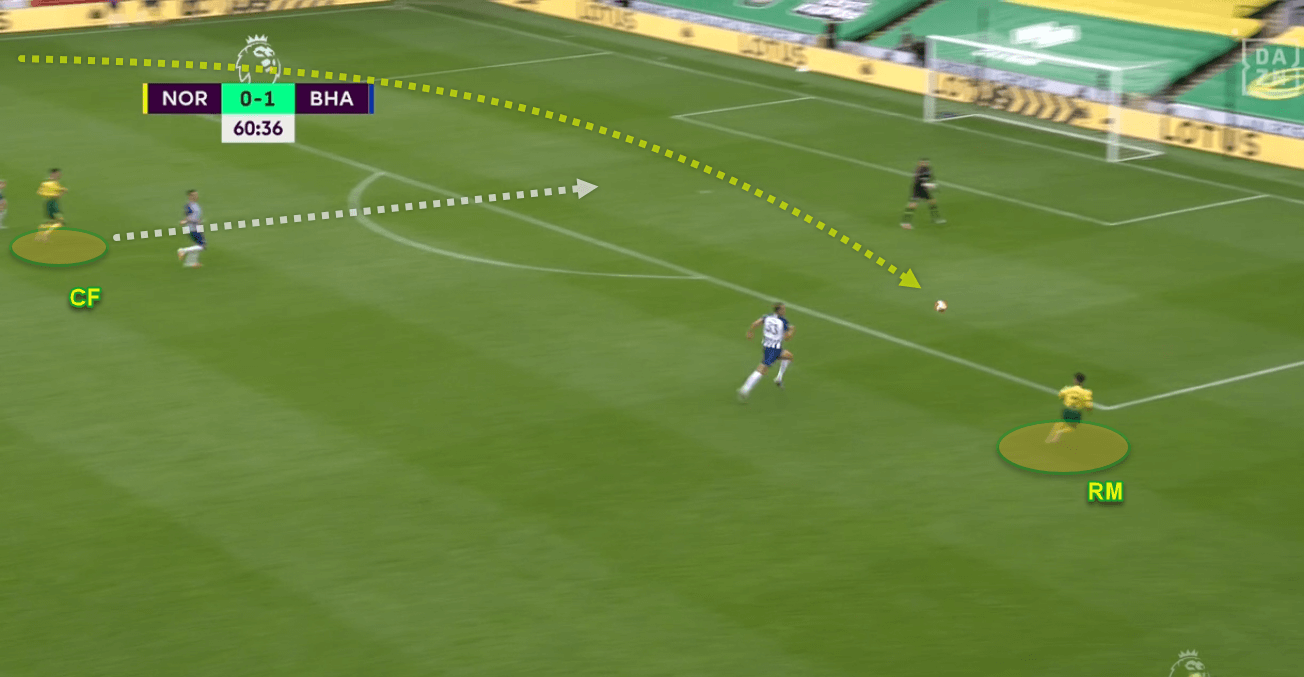 In the image above, Emiliano Buendía meets the long diagonal pass from Maclean where he is in a good position to control and either dribble into the box or deliver a dangerous cross to the oncoming striker Drmić.

In a game where the occasion influenced both teams style of play, Norwich clearly opted more for low-risk/low-reward passes and patient build-ups. However, had the Canaries attempted more attacks on Brighton’s weak-side then they may well have given themselves a better chance for momentous victory.

Brighton allowed  Norwich their third to build up possession, however, after that Brighton’s forwards attempted to target, isolate and tackle the lone Norwich centre-back in possession. Brighton’s front two units needed to be patient and disciplined to execute their defensive plan successfully. 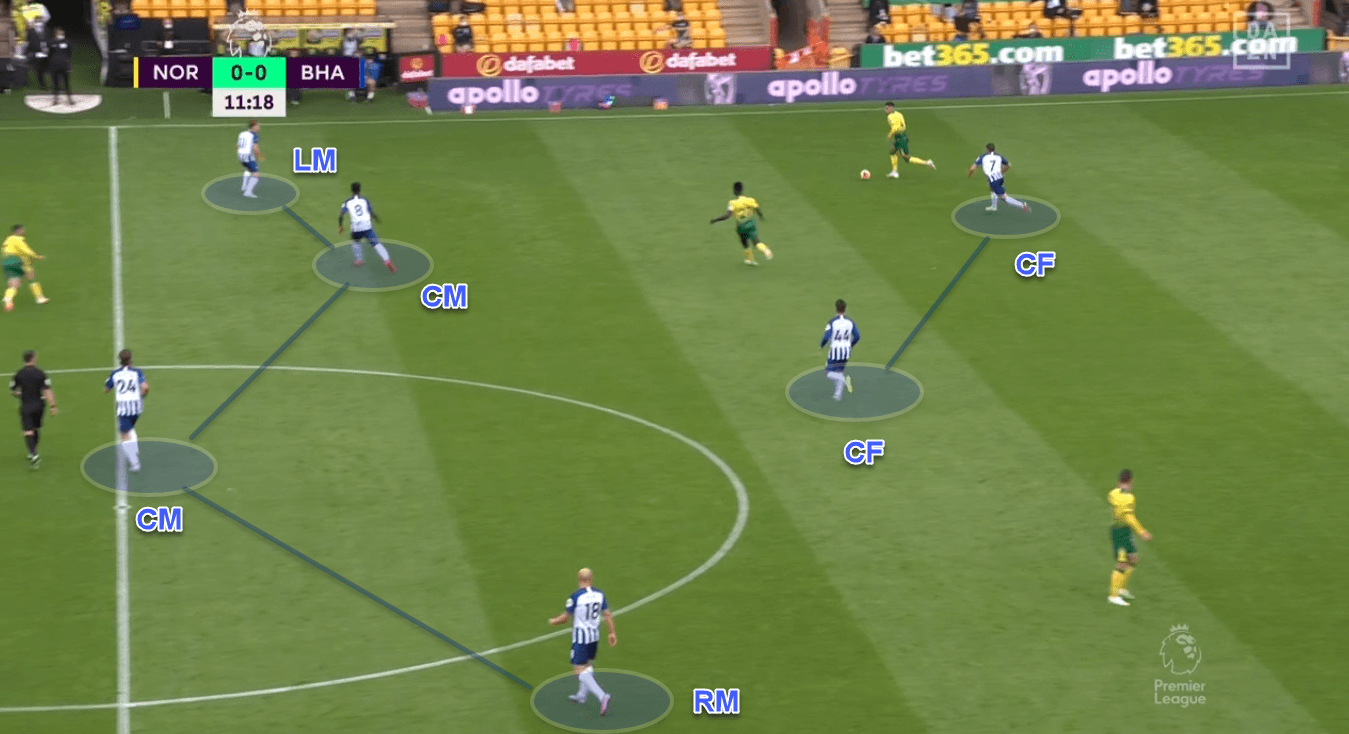 Above we see Brighton forward, Maupay closes down the Norwich centre-back in possession.
Maupay angles his run before pressing to deny the defender any opportunity to play backwards or across. From this point now the Brighton midfield becomes active as they look to screen forward passes in an attempt to intercept, tackle or force errors.

Something important to note that generally goes amiss, as the forward engages the ball-carrier from this position on the field, the longer passing distance into midfield usually means a greater chance of a misplaced pass or a forced error from the passer.

The Norwich centre-backs did, however, get a lot of repeat success playing into the half-space where the Canaries had a temporary overload to progress the ball.

Similar to the hosts Brighton exercised a lot of patient build-up play, a style of play that often resulted in a lot of progress in wide areas due to the numerical inferiority in central areas. Brighton had good ball carriers in Mooy, Maupay and Trossard that could really change the picture of the attack with inventive one-v-ones out wide and sharp turns inside to penetrate centrally.

Throughout the game, Potter’s side showed they could create chances from so many situations such as build-up, counter-attacks, one-v-ones, crosses from wide and central penetrating passes. The Seagull’s only amounted a total xG rating of 0.57 coming from only two attempts on target from six shots. A stat I would owe to two important factors, Norwich’s defensive masterclass as well as Brighton’s caution in attack considering the occasion.

Above, we see Brighton’s pass network throughout the game.
Similar to Norwich we notice a lot of horizontal passes away from pressure along with centralised wingers who serve to free up the channels for the full-backs in attack. 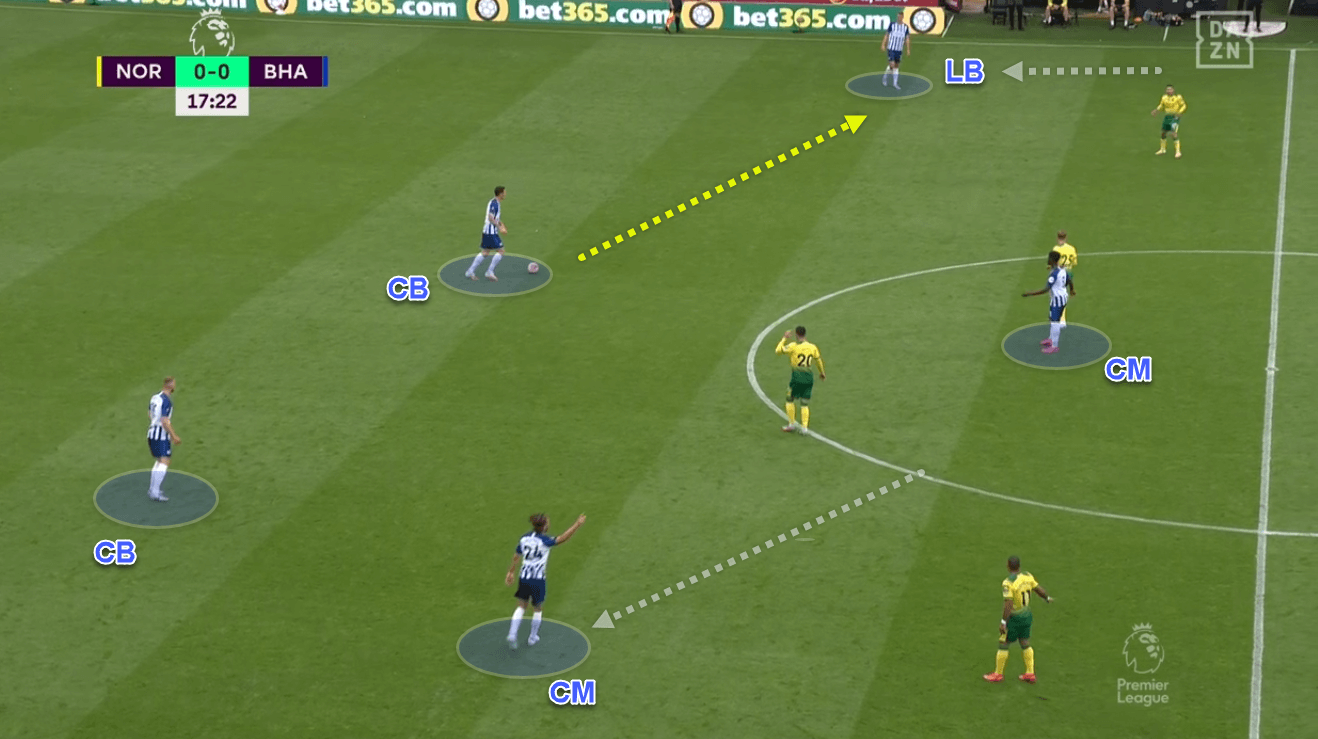 Here we see an example of Brighton’s movement in the build-up, The central-midfielders split to create more passing options the centre-backs hold the ball comfortable as they wait for the Norwich forward to engage the press. 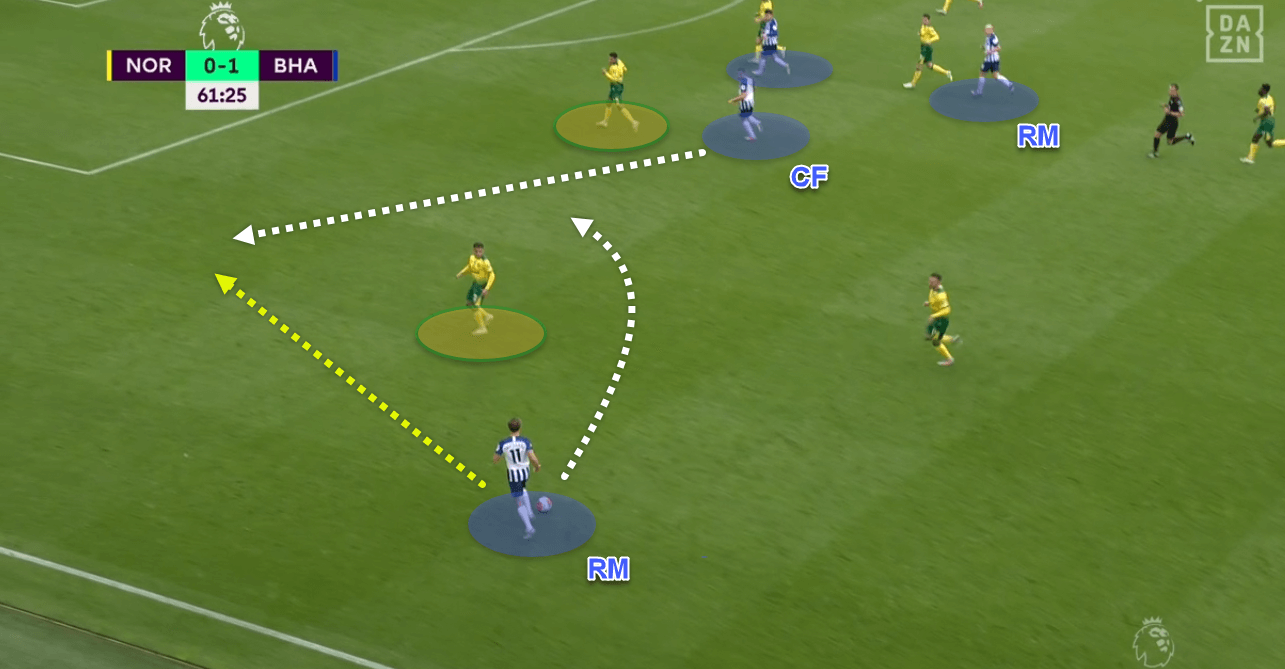 Going forward, right-footed left-midfielder Trossard starts wide then looks to combine with forward Maupay to unlock the Norwich defence with quick movement and efficient passes. Trossard playing as an inverted winger done well to create chances centrally from wide positions causing an imbalance in the Norwich backline with his dribbling and forward passes. 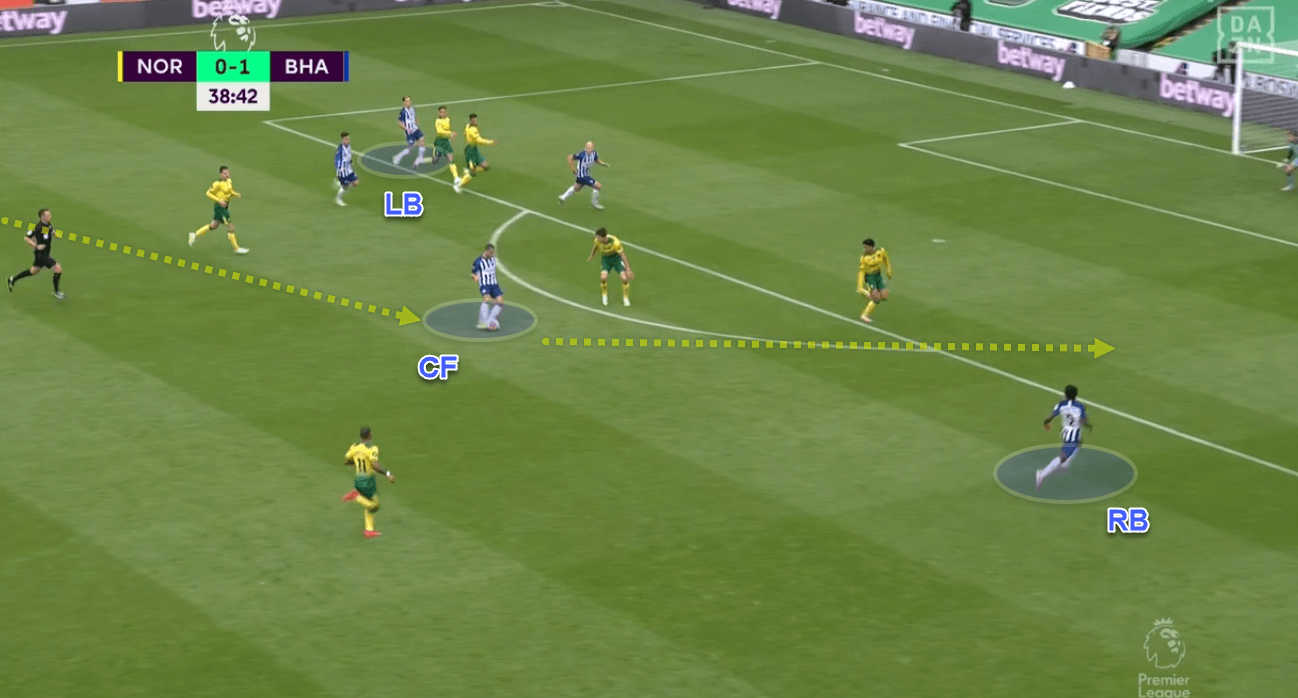 Another key characteristic of the Seagull’s attack is the importance of the full-backs to penetrate in the final third. Both full-backs would often be present particularly in the transition to attack and offer themselves as wide options to deliver crosses into the box. The wide players on both sides of the field combined well and offered good movement vertically and horizontally to create forward passing options and penetrating opportunities.

Norwich switch to a high-press

In the first half, Norwich dropped into a midblock to receive the Seagull’s attack, come the second half Farke changed it up and allowed his players to apply more pressure higher up the field. This, of course, was to find a better opportunity to do two things; disrupt the Brighton attack higher up the field and secondly to have a greater chance of scoring from a successful transition to attack. 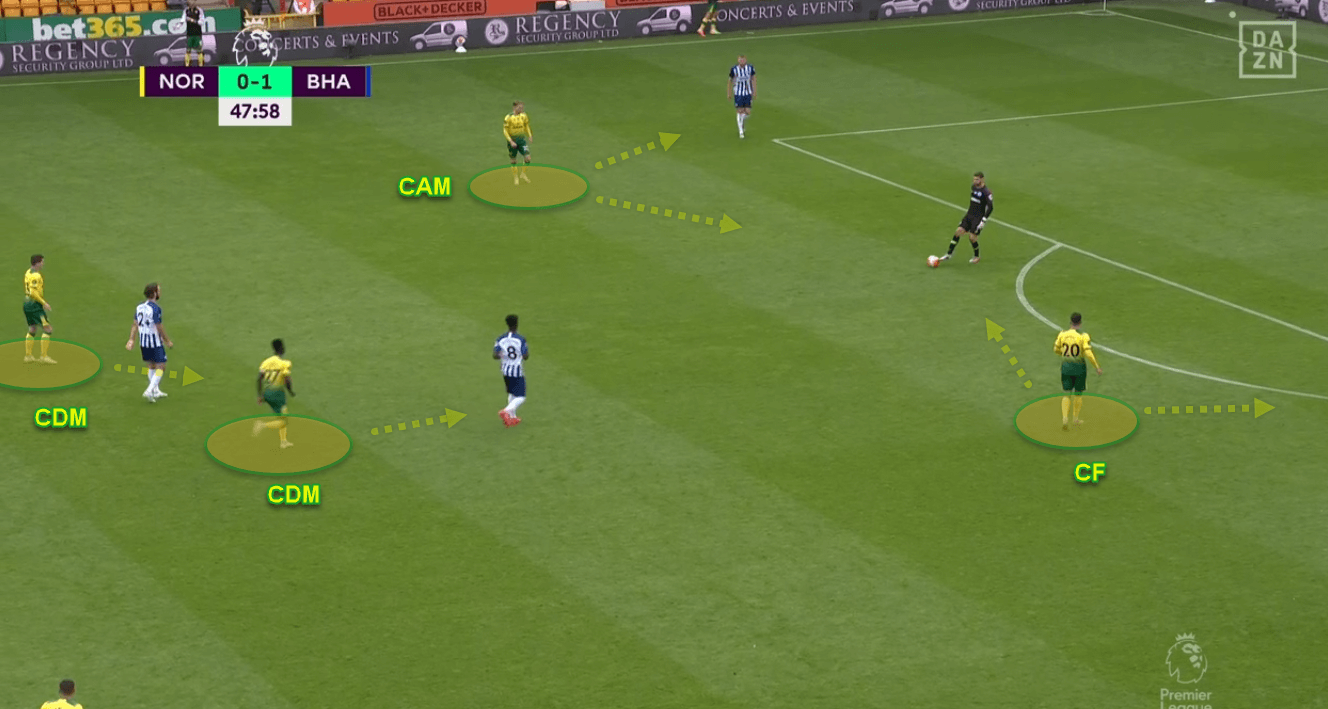 Above, notice a confident Matthew Ryan in possession playing as an outfielder in the moment so close to the Norwich forwards. In this moment Ryan awaits pressure from either forward to release the free player. Here we see Norwich switch to a two up front to engage both centre-backs, and both holding-midfielders for Norwich move up to press the Brighton midfield. This now forces the goalkeeper Ryan to opt for distance in attack, rather than the preferred measured 15-yard ball to a nearby defender.

Norwich did not get much noteworthy success from this strategy; however, it did serve to create secondary success with regards to disrupting Brighton’s attack higher up the field.

Brighton more positive in the transitions

This is where the three-points was won, not the team with the best routine and discipline with their defensive or attacking organisation. But the team that had the ability, courage and chemistry to create and finish a positive attack from a quick transition.

Norwich lacked the freedom and creative zeal to break away from the principled organisation in attack in the moments they transitioned to attack. However, had they of been a bit more direct with the pacey ball carriers they had at their disposal perhaps they too could have either broke the deadlock or replied with a goal of their own.

Below is the moment the games only goal was scored. 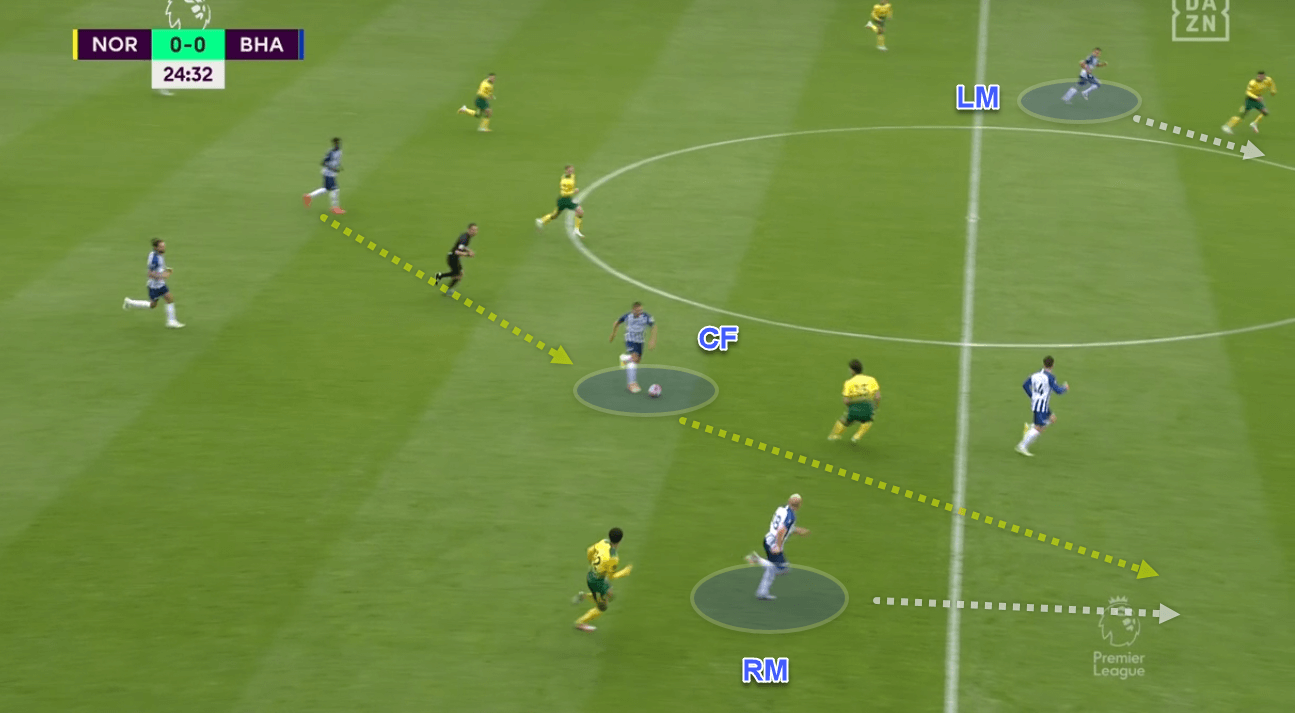 Maupay the centre-forward picks up possession from a successful interception from his teammate.
Mooy the right-midfielder and Trossard the left-midfielder exploit the space left vacant by the opposition full-backs. Maupay plays the ball into the path of Mooy’s run. 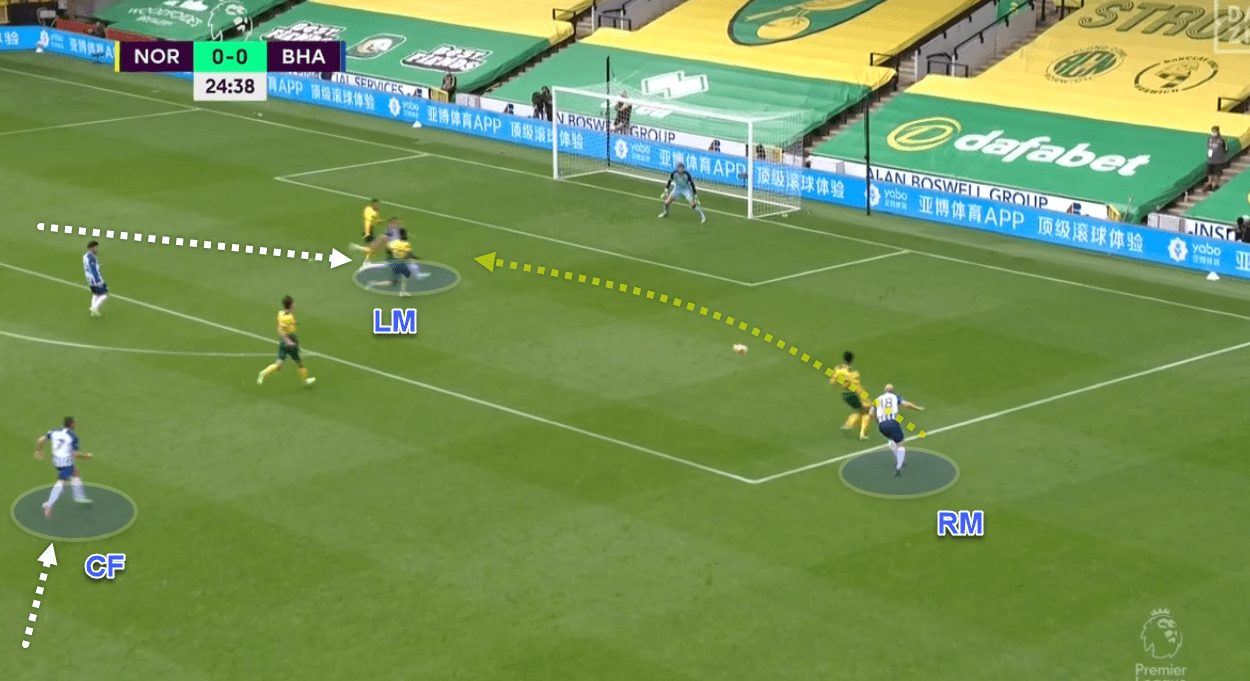 Mooy carries the ball a sufficient distance before playing a perfectly weighted ground pass into the attacking run of Leandro Trossard. Trossard meets the ground cross with a one-touch finish down low to the goalkeepers bottom right.
Trossard times his run at perfect speed to meet the cross between the two centr-backs while still being on-side as the cross is played.

Delivering the games only goal, Brighton defends their lead successfully for 65 minutes to walk away with all three points.

It as to be said if either of these teams were not to maintain Premier League status for the forthcoming season then the top division of English football would lose a very good football-playing side.

Brighton has displayed all season the ability and courage to be a proficient skilful possession-based football side even when trailing in games. A compliment to the manager, his staff and all the players as they show a tremendous character and ability to play football in tough circumstances—a quality not shared by some of the darlings of the Premier League this season.

The occasion dictated a lot on both teams style of play, considering what was at stake it is no wonder we saw only three attempts on target, such careful and cautious attacks married with masterclass defending.

Norwich go marching on in search of three points, first, an away trip to Watford next Tuesday while Brighton welcome newly crowned Premier League Champions Liverpool F.C. on Wednesday.

Track the progress and all the latest news of Norwich City and Brighton & Hove Albion as we keep you up to date on both these sides performances and results in the remaining games of the 2019/20 Premier League Season.