With things heating up at both ends of the table, West Ham travelled to face Manchester United in game week 37 of the English Premier League. The Hammers were more or less guaranteed to stay in the Premier League but a point would settle the equation mathematically. Manchester United, on the other hand, would jump to third if they avoided defeat, but would like to take all three points ahead of their crucial clash with Leicester on the final day.

With Chelsea playing Liverpool a few hours later, the race for the Champions League spots would go down to the last day and United looked to set themselves nicely to seal qualification. In this tactical analysis, we will look at the tactics of both sides and our analysis will look at how these tactics changed through the game. 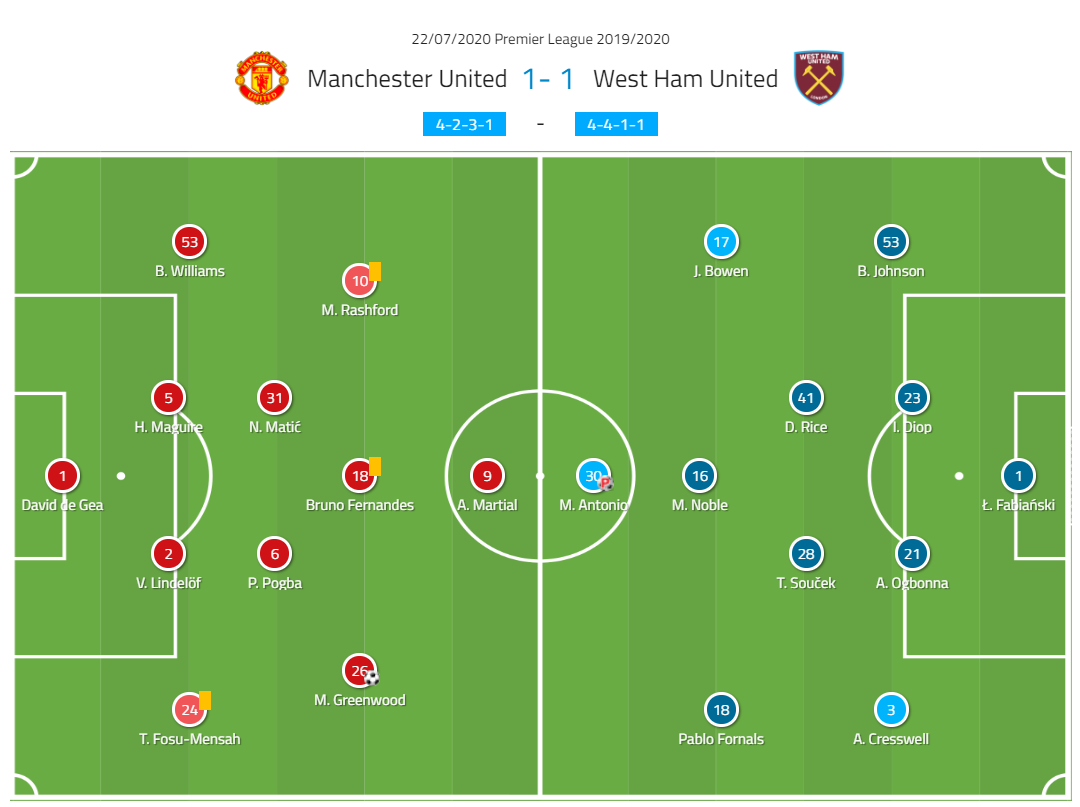 Manchester United made two changes to the squad that started their last Premier League game against Crystal Palace, with Brandon Williams and Nemanja Matić coming in for Aaron Wan-Bisakka and Scott McTominay. Timothy Fosu-Mensah moved to play at right-back while Williams started in his usual left-back position. The Red Devils came into this fixture on the back of a loss in the FA Cup semi-final and were hoping to quickly put that behind them. They were, however, unbeaten in the Premier League since the end of January.

West Ham named an unchanged side and they were coming in on the back of a crucial 3-1 victory over fellow relegation battlers Watford. Michail Antonio had been on impeccable form since the restart and was the second-highest goal scorer since the lockdown. Tomáš Souček had been a good influence on the West Ham side since coming in on loan and the Hammers looked to be closing in on a permanent deal for the midfielder. Captain Mark Noble played behind Antonio as West Ham set up in a 4-4-1-1 formation. 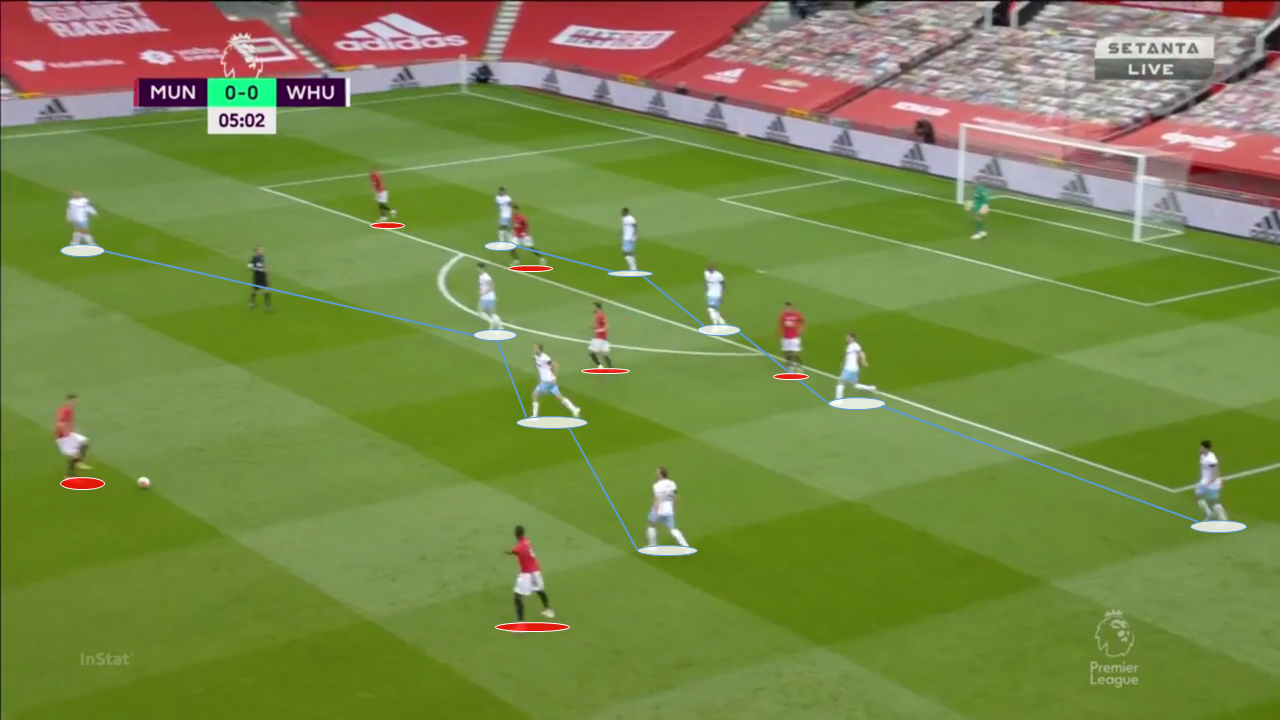 Manchester United set out to control possession as they usually do in the opening stages. This, however, was not an easy task against the disciplined West Ham side who quickly transitioned to a 5-4-1 formation, with Pablo Fornals playing at left-back, allowing Aaron Cresswell to play effectively as a third centre-back. Their defensive tactics also meant that Noble would drop further back to provide support to the likes of Declan Rice and Souček.

The compact nature of West Ham’s defence meant that there was less space for the likes of Bruno Fernandes to exploit, meaning that Manchester United had to rotate the balls to the wings. However, they often found themselves outnumbered down the flank, with West Ham creating overloads using their full-backs, wingers and defensive midfielders. 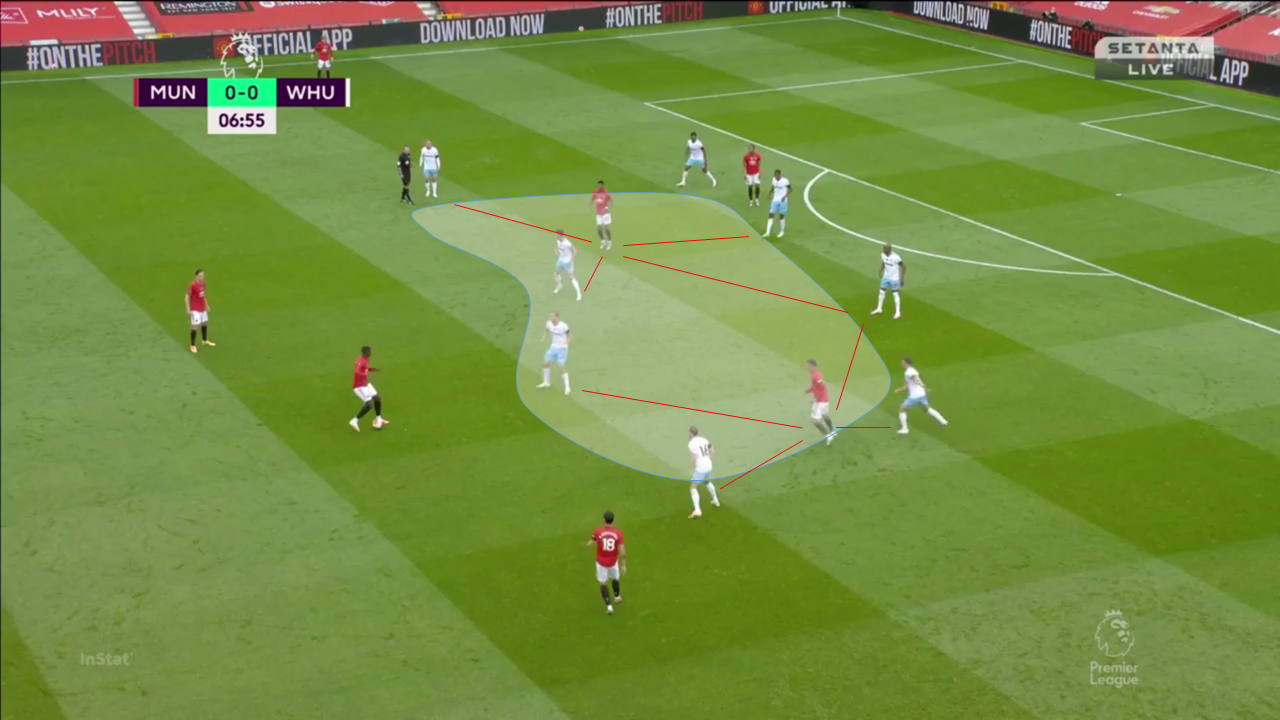 This meant that United had to penetrate through the centre, but with the gaps reduced to a minimum, Fernandes dropped deeper in order to receive the ball. As a result, the West Ham defenders only had to look for three players, namely Marcus Rashford, Anthony Martial and Mason Greenwood. The deeper role meant that the threat of Fernandes was greatly reduced and a pass to any of the front three would see at least three West Ham players in position for a tackle.

This solid structure drastically reduced the passing options for Manchester United and their tactics of quick passing were ineffective. The build-up plays were much slower and even though the wings did provide some space for them to attack, their full-backs and wingers were quickly closed down. 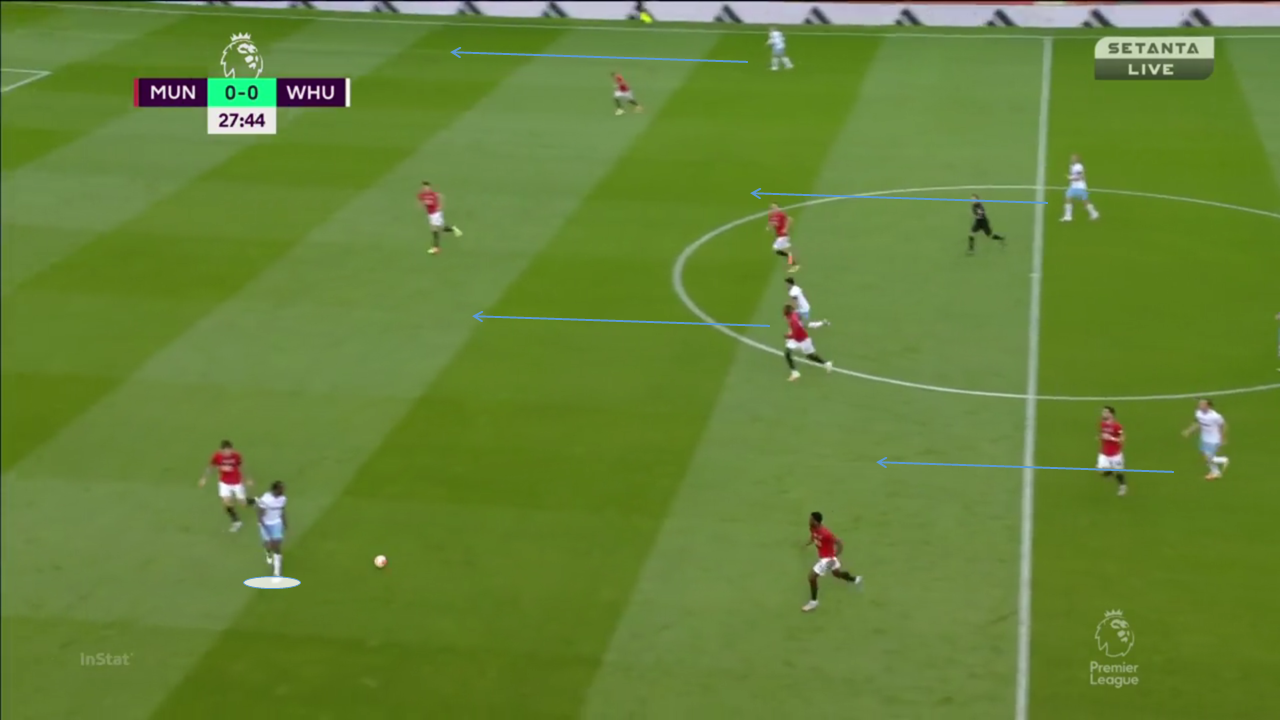 Though West Ham’s tactics were set up to be defensive, as we saw earlier in the analysis, they also looked to move forward occasionally. They would play the ball up to Antonio who was strong enough to hold it while the midfielders could push forward in support. The pace of Jared Bowen down the right flank was also key as he was able to run at the defence and cause them problems. Manchester United, who had committed themselves forward in search of a goal, now had to scramble back in order to defend and ended up committing silly fouls in their own half.

Fosu-Mensah, who is not as adept as Wan-Bisakka in defence, found it difficult to handle the transition from attack to defence and was often out of position. Eventually, a silly foul from him led to a free-kick which saw Paul Pogba handle the ball in the box, with Antonio converting from the spot to give West Ham a surprising lead before half time. 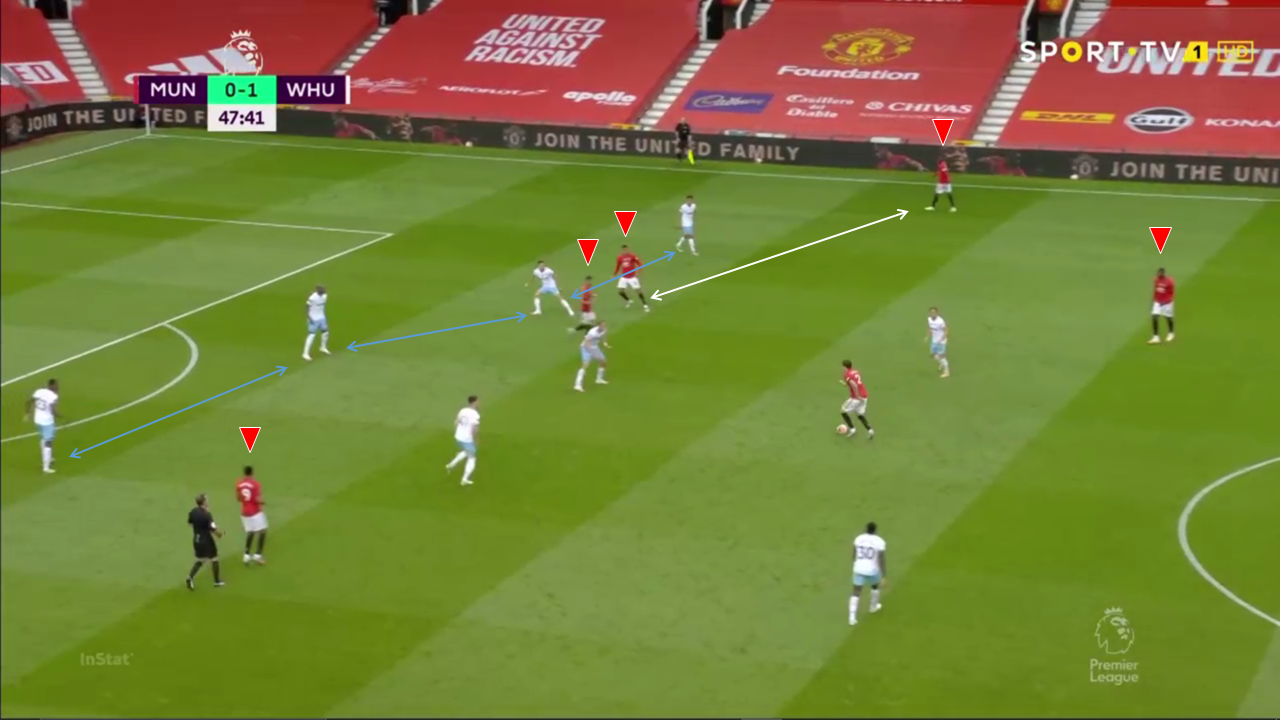 When Wan-Bisakka came on for Fosu-Mensah at half-time, he looked to stay much closer to the touchline, spreading the West Ham defence. The compact structure that West Ham had maintained earlier now had gaps that opened up for Greenwood and Fernandes to exploit.

Fernandes could play much higher up than he did in the first half and with Fornals having to watch out for Wan-Bisakka, Greenwood found himself one on one with Cresswell. 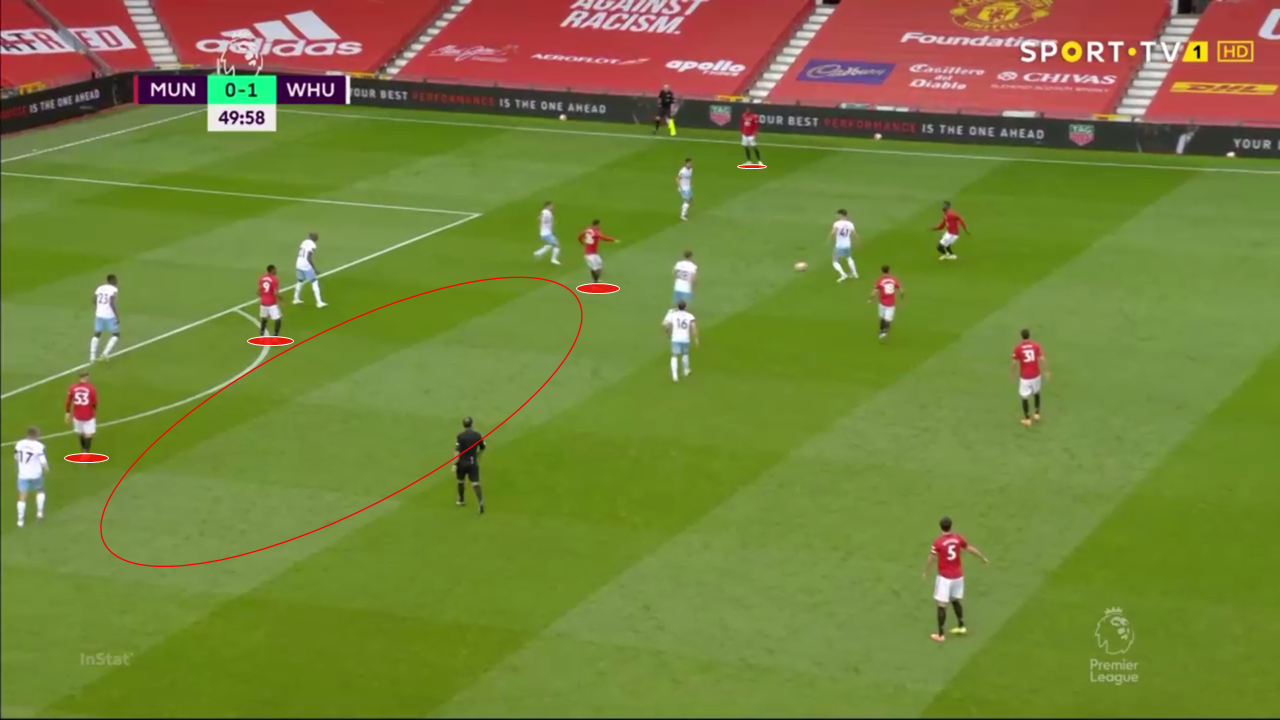 The West Ham midfielders, however, still looked to maintain a compact structure and stay close to each other, meaning that they created gaps behind them. Martial, Greenwood and even Williams could drift into these gaps in the centre and cause a threat to the defence. The Manchester United attackers were effectively one on one with their defenders and with quick passes were able to bypass them with ease.

West Ham struggled to adapt to these changes in tactics early in the second half and ended up conceding to a well-worked Manchester United move that saw Greenwood score his 17th goal of the season. 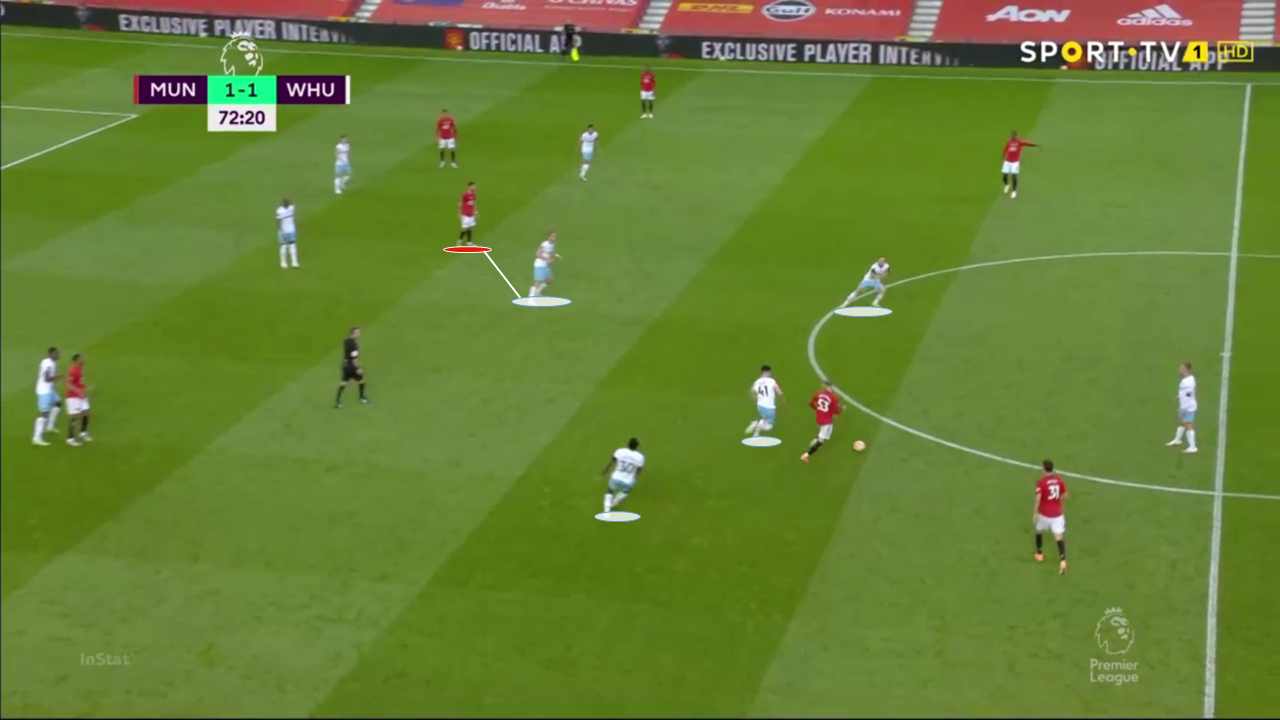 Conceding the goal was a real wake up call for West Ham though, who quickly reshuffled their tactics. They realised that their defence would be spread and hence had to come up with a solution to prevent the Manchester United attackers from exploiting the half-spaces that were created. This solution came about in the form of man-marking Fernandes.

The remaining midfielders looked to press the player with the ball and force Pogba and Matić further back, meaning that the quick passing option was unavailable. Such disciplined play saw West Ham greatly reduce the threat of a second Manchester United goal. 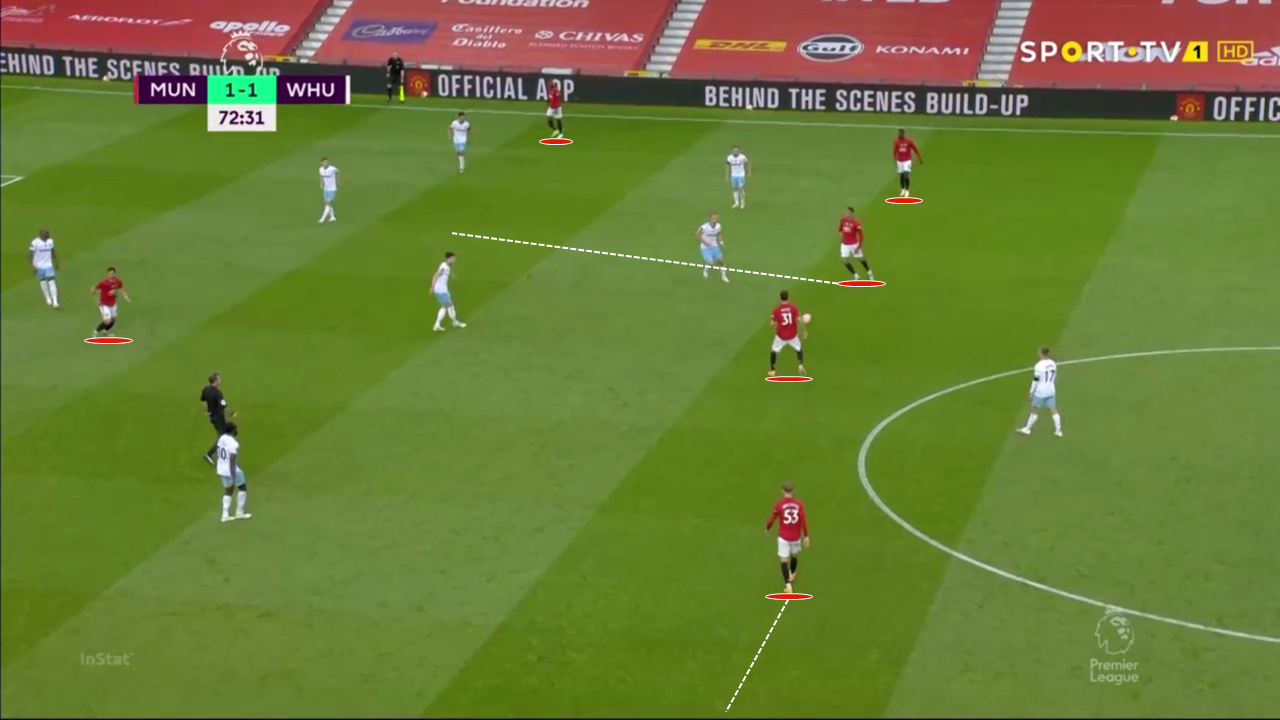 For the remainder of the game, both Manchester United and West Ham looked to adopt contrasting tactics. The former looked to penetrate through the centre while the latter looked to play out through the wings. United looked to reduce the passing distance to their players from before by having Greenwood or Fernandes drop back to receive the ball while also having Williams move in centrally.

In this way, they hoped to rotate the ball across the pitch in order to find an opening to penetrate. Such tactics resulted in a lot of lateral passes being made but unfortunately, West Ham’s new defensive tactics meant that the forward passing options were limited. It appeared to be a stalemate in midfield with United’s slow build-up play and West Ham’s solid structure. 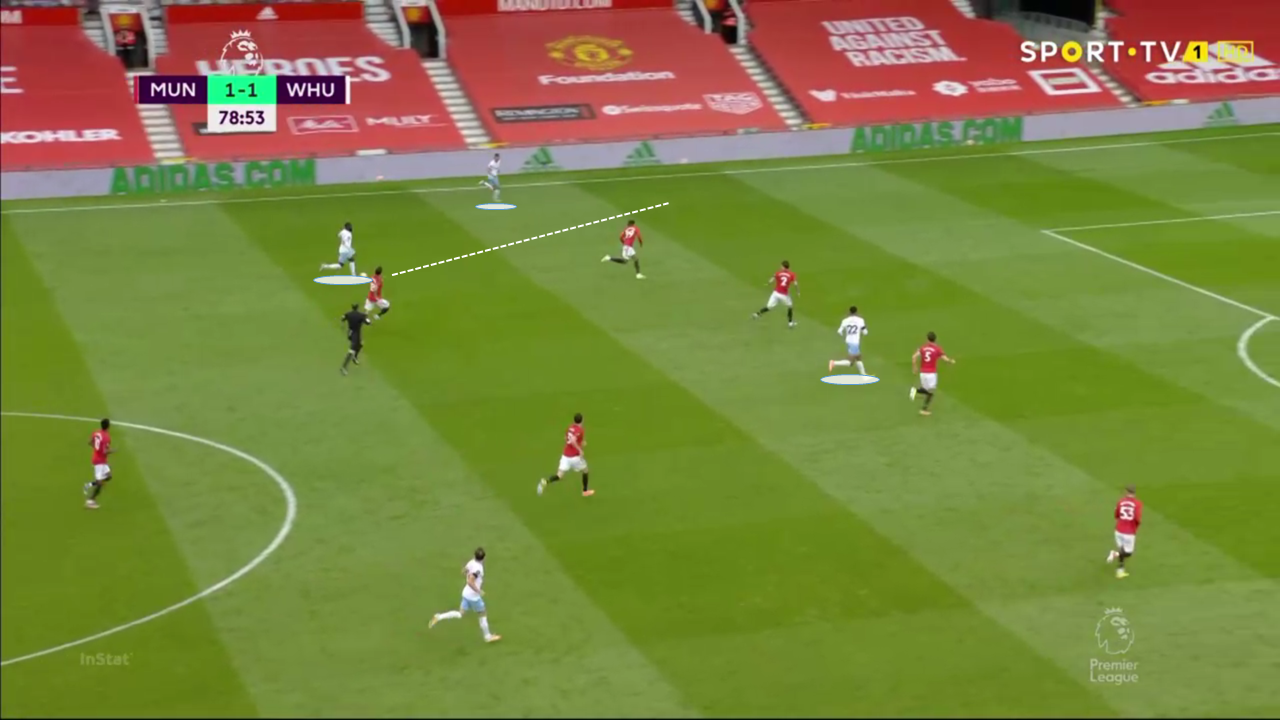 An effective press also meant that West Ham were able to win the ball in midfield. With Wan-Bisakka high up the pitch and Williams moving centrally, the Hammers could make use of both flanks in order to push forward. Fornals would push out of his defensive role while Bowen could make use of his pace to charge at defenders down the opposite side.

West Ham were able to not only threaten the Manchester United defence but crucially take possession away from them and limit their chances of finding a winner. The Hammers could easily hold up the ball at the opposing corner and with the likes of Bowen and Cresswell, could play dangerous looking crosses into the box. 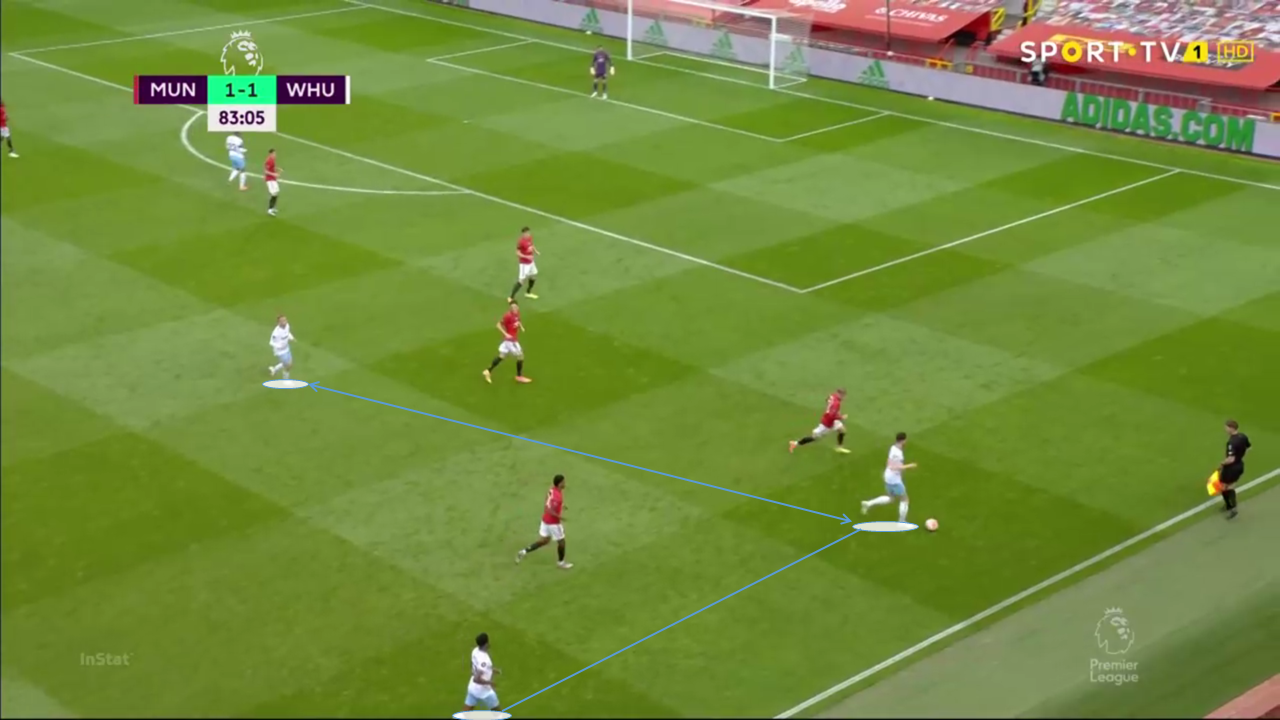 The likes of Rice and Noble would also swap with the wingers in order to allow them to cut inwards but just like West Ham earlier, Manchester United managed to overload the flanks and stem the attack. West Ham also seemed content to hold the ball up the other end and apart from converting it into the occasional chance, they did not do much with the possession there. By this time, however, Manchester United had been wearing down and with each attack from West Ham, were losing their chances of finding a winner. Neither side could come up with anything special to penetrate the other’s defence and perhaps fittingly, the game ended in a stalemate.

The point meant that West Ham had been assured safety if it was ever in doubt before. The Hammers had underperformed this season and would not have liked the fact that they were in the relegation scrap towards the end. Having confirmed their safety, however, they could now focus on improving their squad for next season, with the signing of Souček looking to be a key part of that. Rice had also been linked with moves away from the club but West Ham would hope to have him for the next season as he has been crucial to their success as well.

Manchester United, on the other hand, moved into third place ahead of Chelsea’s game against Liverpool. Chelsea’s loss in that game meant that United remained in third at the end of the game week and a crucial trip to Leicester beckoned. The equation was simple for them, avoid defeat and they would qualify for the Champions League. The side had come a long way from being well behind the top four spots to potentially finishing third and it was a testament to their impressive run of form since January. Their fate, however, was in their hands and they would have to put on a good show against the hungry Foxes who would be sure to hunt down that Champions League spot.