OL Reign beat Orlando Pride 3-0 in the 20th fixture of NWSL to consolidate their second spot in the standings just behind Portland Thorns given the goal difference advantage for the latter. On the other hand, Orlando Pride are now holding the fifth spot with 28 points, between Chicago Red Stars and Houston Dash. Although this position can qualify the team to the playoffs, their performance against OL Reign wasn’t really convincing neither in defence nor in terms of chance creation.

That’s why we will look at the weaknesses that appeared in this match from Orlando’s side in this tactical analysis article, while OL Reign’s excellent attacking performance that was led by Eugénie Le Sommer will also be analysed extensively to explore how the locals got the advantage in terms of tactics.

Orlando Pride started the game with the 4-4-1-1 formation with Ashlyn Harris as a goalkeeper, Ali Riley, Ali Krieger, former Manchester United’s Amy Turner and Courtney Petersen in defence, Gunnhildur Jónsdóttir and Meggie Dougherty as central midfielders with the ex OL Reign and former Lyon and Arsenal player Jodie Taylor and Sydney Leroux as wingers and Taylor Kornieck as a second striker behind Alex Morgan, the team’s striker who also had a short experience in FAWSL last season with Tottenham. 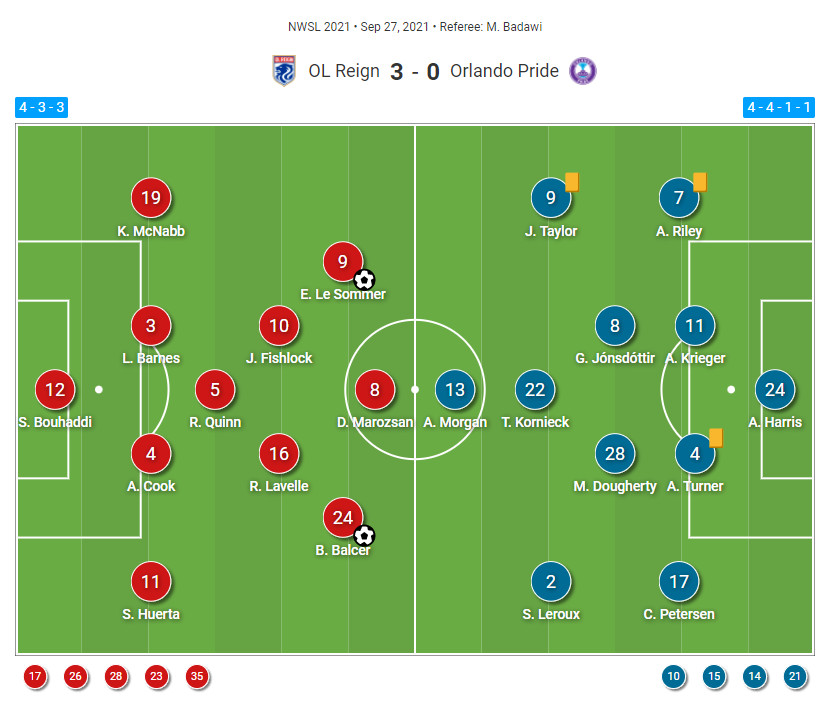 OL Reign were able to perform one of their best ever performances when considering the quality of the opponent, the importance of the match and the number of scored goals. OL Reign players exploited Orlando Pride’s poor defending especially in the first-half to score goals and finish the game early. They were able to score their first goal in the second minute after intercepting the ball from Orlando’s players who were unable to clear out the ball from their final third.

In fact, it was also Dougherty’s clear marking mistake that made Balcer’s mission easier. Dougherty left Balcer behind her and therefore didn’t know in what direction the latter was running. And in the end, we saw Dougherty running one way and Balcer running completely towards a different spot as the arrows show below. Also, credit should be given to Huerta for her excellent cross that found Balcer’s header. 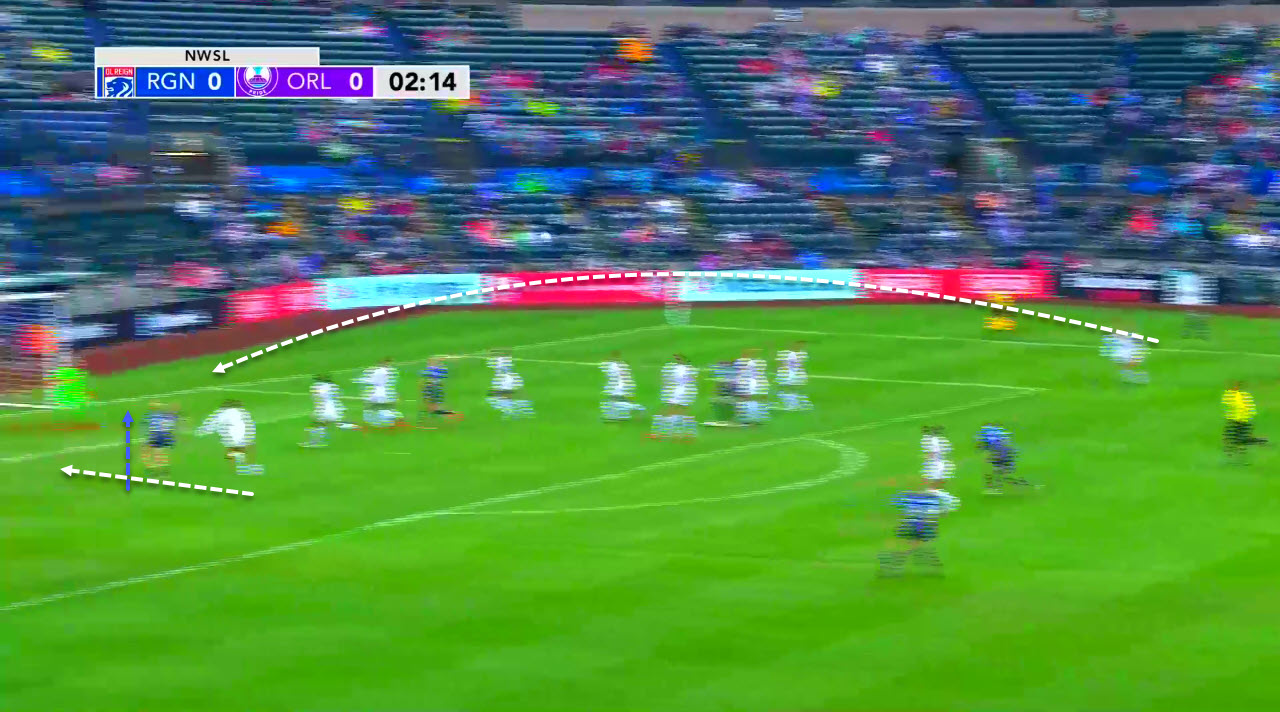 Following the goal, Orlando continued struggling and OL Reign kept attacking so often since they felt that Orlando’s players are not having their best day. The impact of Lavelle and Fishlock in midfield and especially in playmaking was clearly felt during this match as both players contributed to most attacks either with through passes or with advancement to give extra passing options and confuse defenders.

And once again, it was Orlando’s concentration mistake that allowed OL Reign to have a two-goal advantage at the 27th minute of the first-half. The credit in this action goes mainly to Marozsán who anticipated Turner’s slow pass and gave it to Le Sommer who shot it with an excellent technique, giving the goalkeeper no chance to save it. 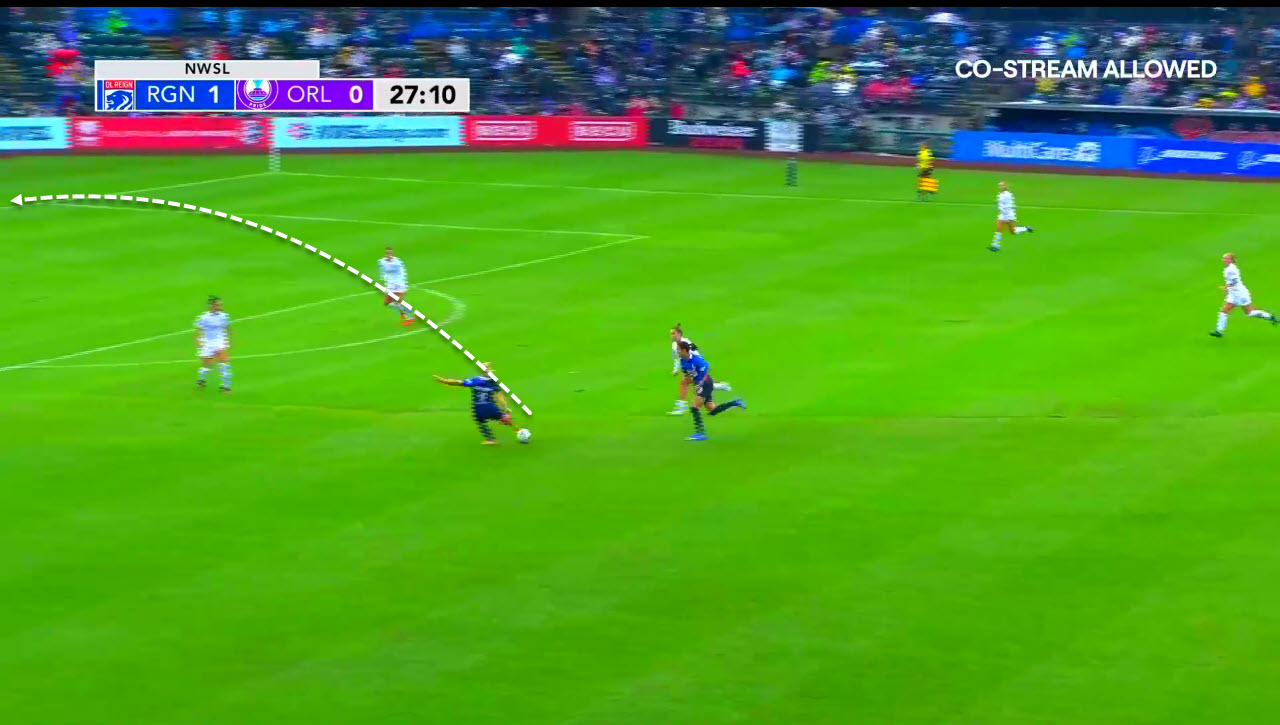 The same two players Le Sommer and Marozsán were also the source of the third goal of the match as their previous Olympique Lyonnais’s chemistry was displayed clearly in this match. Marozsán was able to confuse the whole Orlando’s defence with a quick first-time shot after receiving the ball in a dangerous position and spotting Le Sommer waiting for the ball without tight marking. The latter was able to convert the pass into a goal with a first-time shot as well, making the action look so simple and natural, despite the difficulty of taking such quick and successful decisions inside the penalty box. 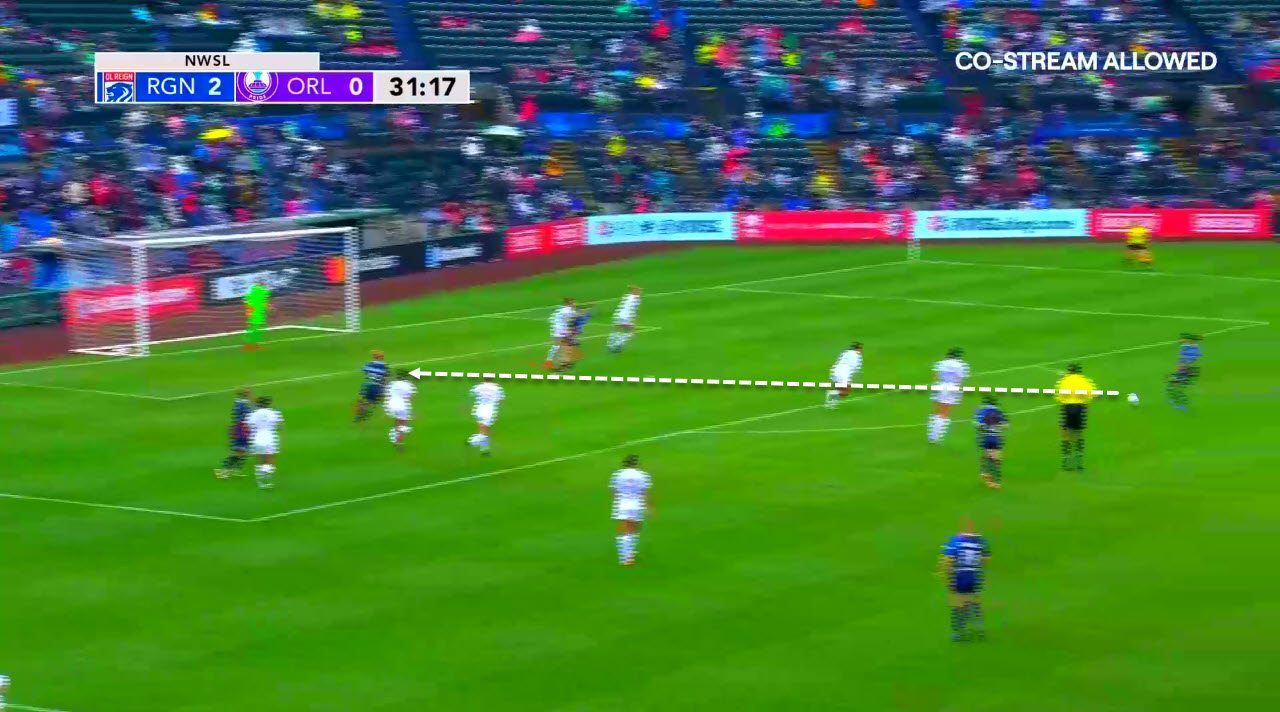 As opposed to OL Reign, Orlando Pride players were a bit too passive during this match and were not able to execute their attacking plans nor reach OL Reign’s goalkeeper so often. This issue was a reason that explains why the team didn’t score any goals in this match but at the same time it doesn’t explain the fact that they made a lot of defensive mistakes to concede three goals.

In reality, Orlando’s defence could have handled some situations in a more decisive way during this match to not end up giving away the ball easily. Orlando conceded many other chances apart from the three goals and if not for Harris’ crucial saves, the team could have conceded more goals.

As you can see below, Lavelle was free to shoot as soon as she received the ball and didn’t face any disturbing marking to prevent her from shooting. 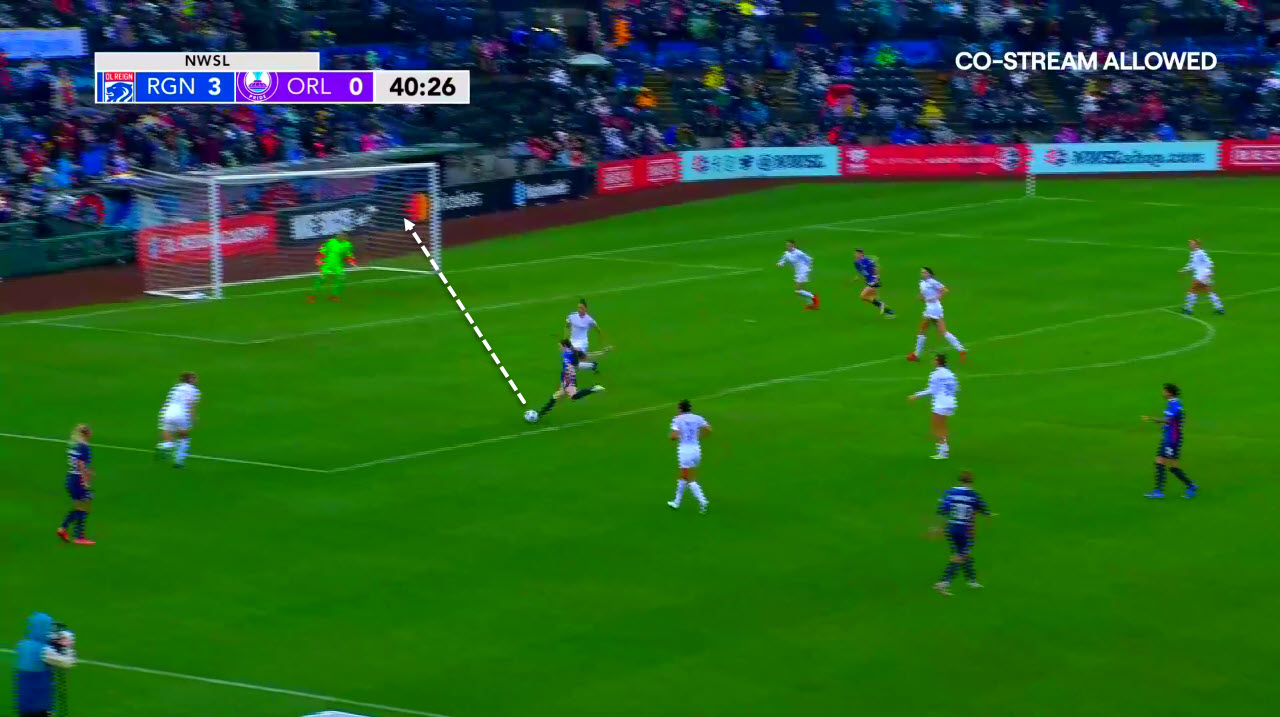 And apart from the defensive mistakes, Orlando’s playmaking and chance-creation dilemma in this match is problematic. Morgan and Kornieck were isolated from the rest of the team for most of the time and there was no real link between midfield and attack. This leads us to wonder whether this formation and these player choices are the most suitable ones for Orlando’s attacking performances.

This 4-4-2 or 4-4-1-1 formation does not give enough attacking freedom for a player like Jodie Taylor for instance as the player is naturally a striker. The team’s coaching staff could have played with two strikers: Morgan and Taylor, with Kornieck on the right-wing and Leroux on the left one in a 4-2-4 formation with both Kornieck and Leroux retreating to help the defence whenever needed. This would add more depth to Orlando’s attack and enable Morgan to have more touches of the ball and exploit chances with the help of Taylor who is also excellent at finishing. Another solution would be to play in a 4-3-1-2 formation to make sure that the midfield is strong and can beat OL Reign’s strong midfield, while adding a striker (Jodie Taylor or Leroux) beside Morgan and just in front of Kornieck, the advanced playmaker.

All this to say that Orlando should have added more depth to their attack especially in the second-half to get back in the game, as they have some excellent strikers who are used in non-suitable positions.

OL Reign got the victory that they needed from this match and showed that they have numerous key attacking players like Lavelle, Le Sommer, Marozsán, Fishlock and more. They should keep this game in mind and make sure that their performances don’t drop in the upcoming games to keep themselves in the same excellent position.

On the other hand, Orlando Pride need to make numerous revisions to the way they attack and defend while looking for positioning solutions both in attack and when marking too. According to the level of their players, the team should do better in such encounters. 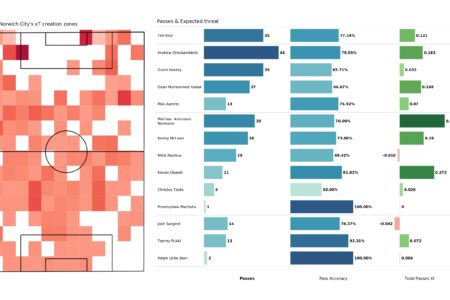