Pablo Fornals initially took some time to settle into life in East London. After completing a move from Villareal to West Ham for €​​28 million in 2019, swapping La Liga for the Premier League, Fornals struggled to immediately find the form expected with such a price tag, and as a result, he found regular starting football a challenge to come by. However, the 25-year-old Spaniard has now truly adapted to the Premier League and has won plaudits among both fans and journalists for his tirelessly energetic performances in the West Ham midfield.

This, coupled with his skill and vision on the ball, as well as a versatility has made him a key component in the Hammers’ midfield. His performances have even led to a recall to the Spanish national team, with Fornals competing against both Kosovo and Georgia in World Cup qualification games.

This tactical analysis and scout report will highlight Fornals’ major qualities as a player, and provide an analysis on how he fits into West Ham’s tactics under David Moyes.

His average positioning thus far this season can be seen from the heat map below, showing his touches from games in the Premier League as well as in the Carabao Cup and Europa League too. What we can see in this image is obviously a large number of touches on the left flank, and Fornals has predominantly played as a left-sided attacking midfielder but has also played centrally too. 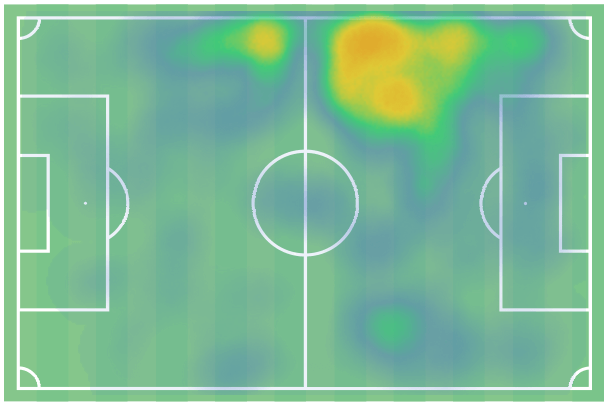 Fornals varies his positioning between the left-wing and the central channel, however, often looking to make late movements from one channel to the other.

These most frequently come from him starting central, using the high positioning of left-back Aaron Cresswell to draw the opposition full-back slightly further forward, or at the very least occupy the opposition right-winger. If Cresswell doesn’t push forward then Fornals will happily rotate with midfield teammates, having them occupy the left flank whilst he sits inside. This pattern occurs in the image below. 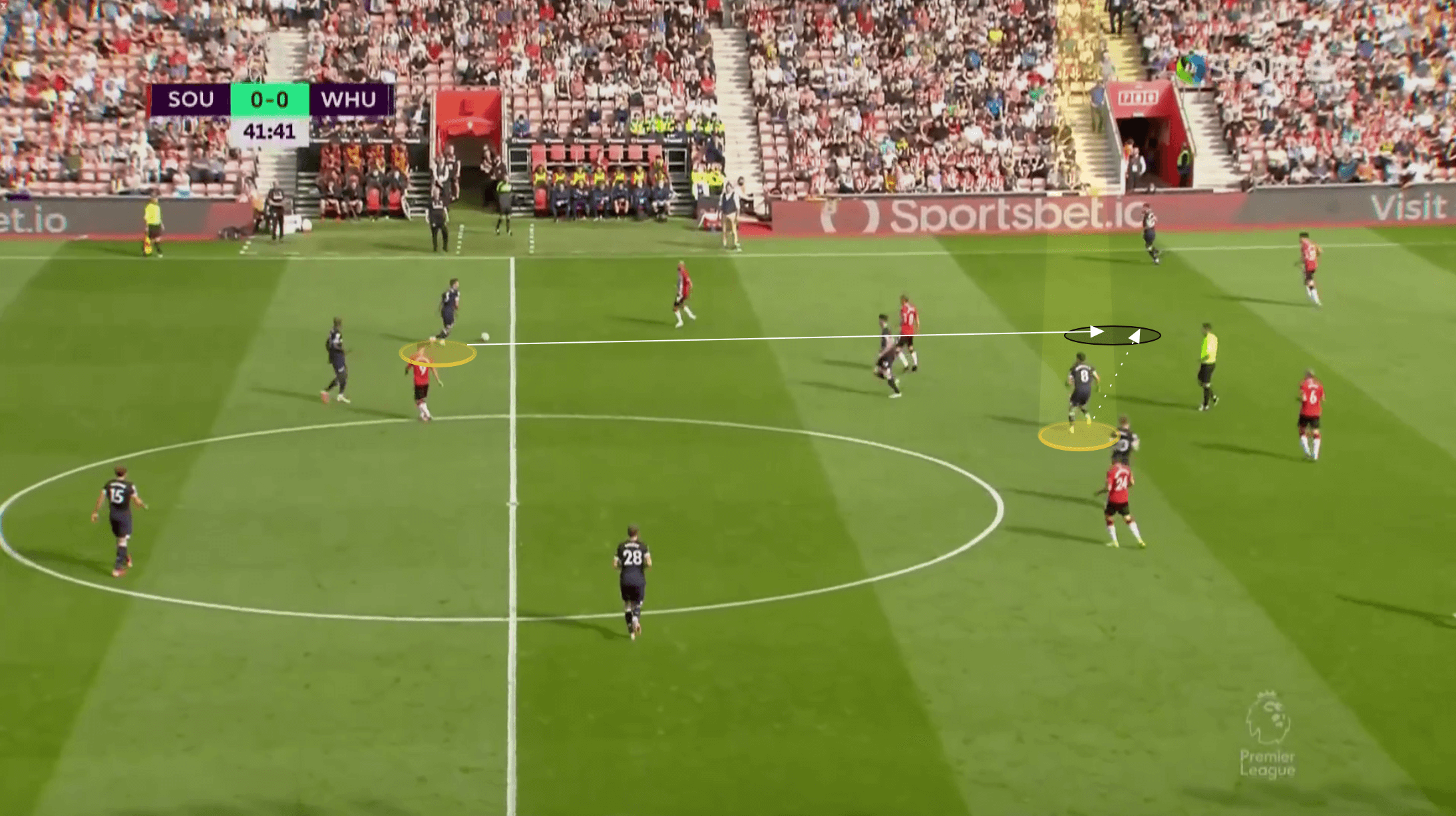 Fornals will then look to make late runs behind the defence down the left-wing, or shift from the central channel into the half-space, and look to receive between the lines.

He often looks to receive the ball in this space with a body orientation that allows him to move the ball on quickly. This most frequently comes with him receiving on the half-turn. A key characteristic of Fornals’ in possession play, which will be detailed more in the next section, is the speed at which he moves the ball on, and this is not different when receiving possession in an attacking space such as the one in the next image. 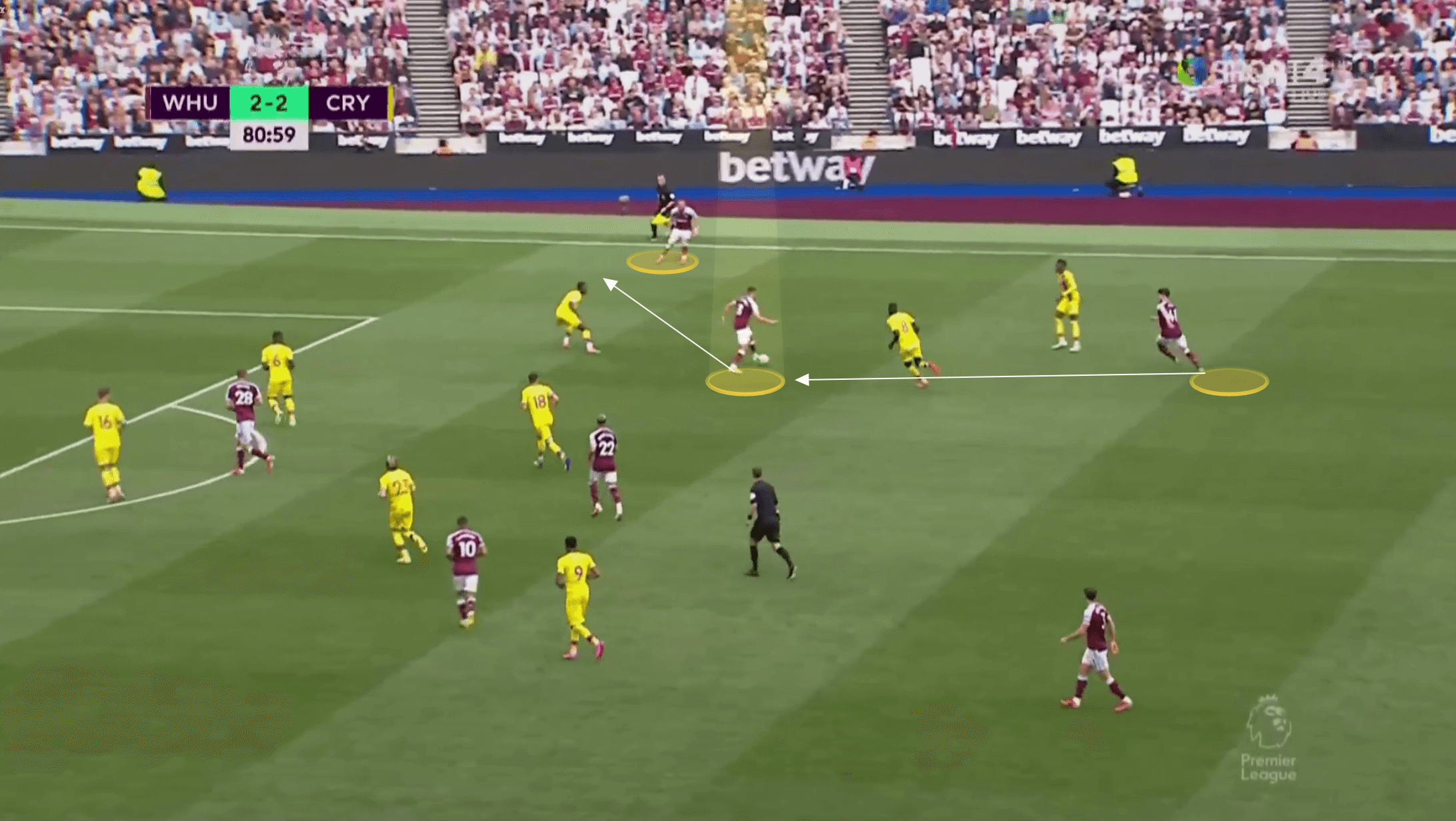 Fornals will use his movements into the half-space to draw a defender out of the backline. Fornals will purposefully not scan as he receives in these spaces, looking to use this lack of scanning to lure the defender towards him, with the hope they have recognised the pressing trigger. Fornals is excellent when playing off of one-touch, and he will quickly shift into the space in behind after laying the ball off if he can draw the defender forward. 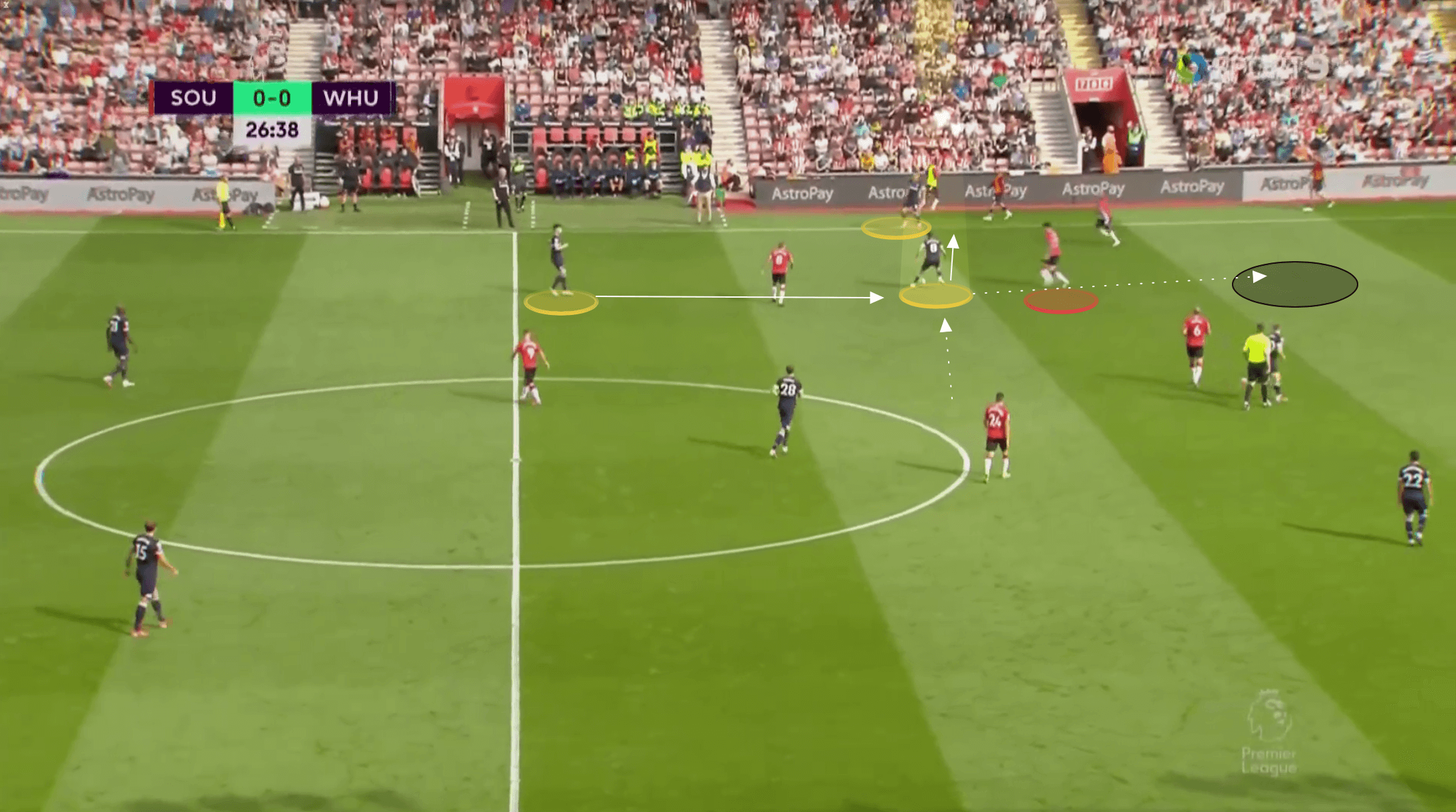 For all of his skill on the ball and in finding spaces, Fornals regularly does the extra work that so often goes unnoticed. He regularly shows excellent energy and stamina in midfield, whether that’s with pressing or tracking back out of possession, or pushing forward quickly on the counter-attack. When West Ham have the ball, Fornals makes an extra effort to support isolated teammates and will react to a long ball played forward by instantly moving towards the contest in order to be in the right area to pick up any knock-downs or loose balls.

Fornals is at his best with the ball at his feet, where he is difficult to dispossess due to his excellent dribbling ability but is still a quality passer who progresses the ball at a good rate too. As a dribbler, he has completed 53.8% of his 1.75 dribbles per 90 this season – an impressive percentage. Whilst with his passing, he has been averaging 11.03 forward passes per 90, completing 73.2% of these.

As a dribbler, Fornals can take on an opponent at pace and can attack spaces behind a defender with some success. Yet he is at his best when forced to dribble in a tight area – whether that’s to get away from a counter-press or when he receives with his back to goal. Fornals uses misdirection with a quick change of pace to create enough space to get away from the defender in this instance but also uses his strength well too. Whilst not obviously physically strong, Fornals is a combative player and yet on top of his competitiveness, there is a strength here from his lean but muscular build, hidden by a non-assuming frame. 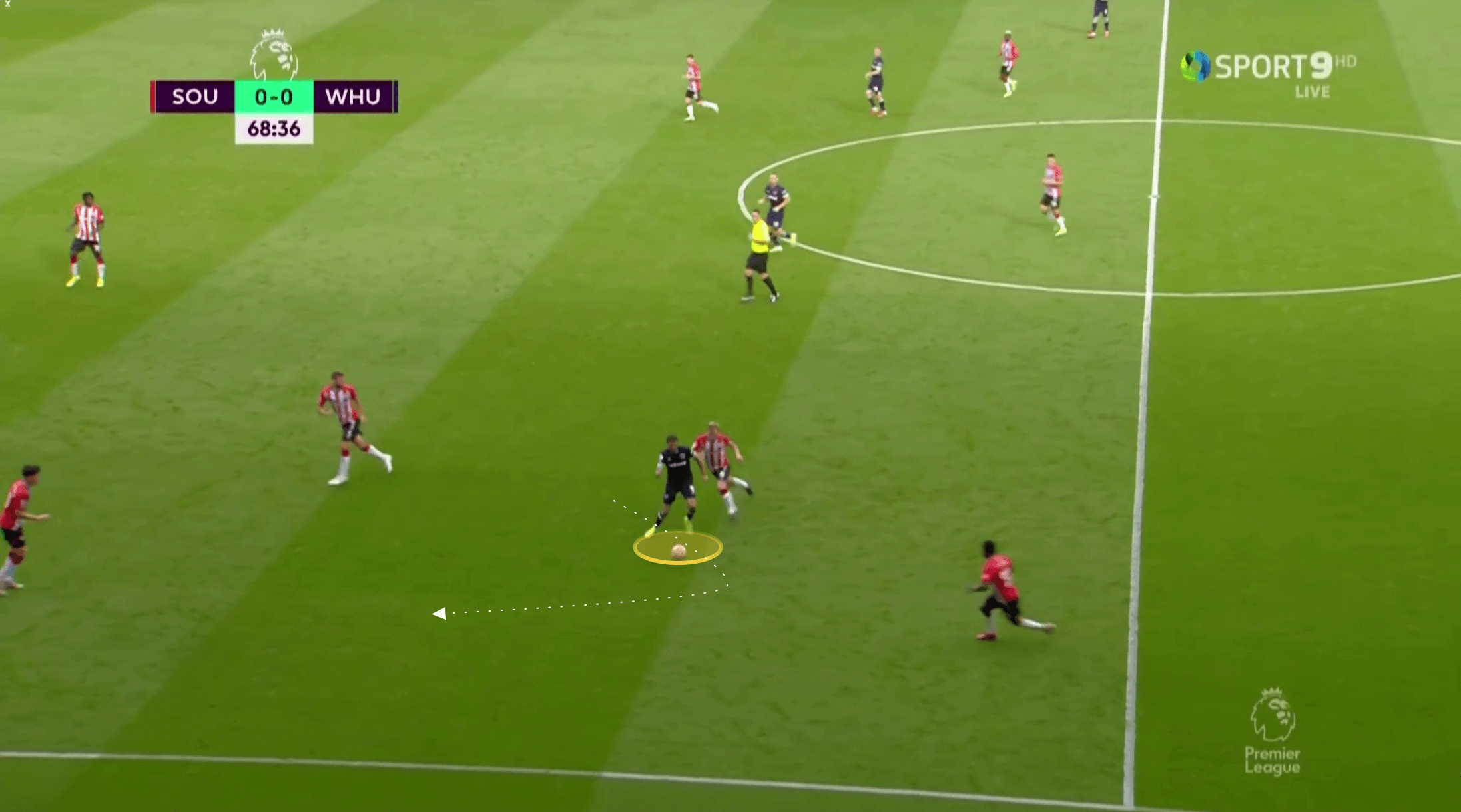 Whilst this dribbling ability is incredibly useful during build-up play or when holding the ball up in the opposition half, Fornals can also unlock defences with it. Just as in the previous image, Fornals exhibits a zeal for having the ball with a defender on his back. In the next image, he uses a similar misdirection, this time feigning a pass out wide, before cutting the ball between the two defenders, beating them with the dribble and directing a cross into the box. It is this type of ingenuity in possession that make Fornals such a difficult and unpredictable player for defenders to face. 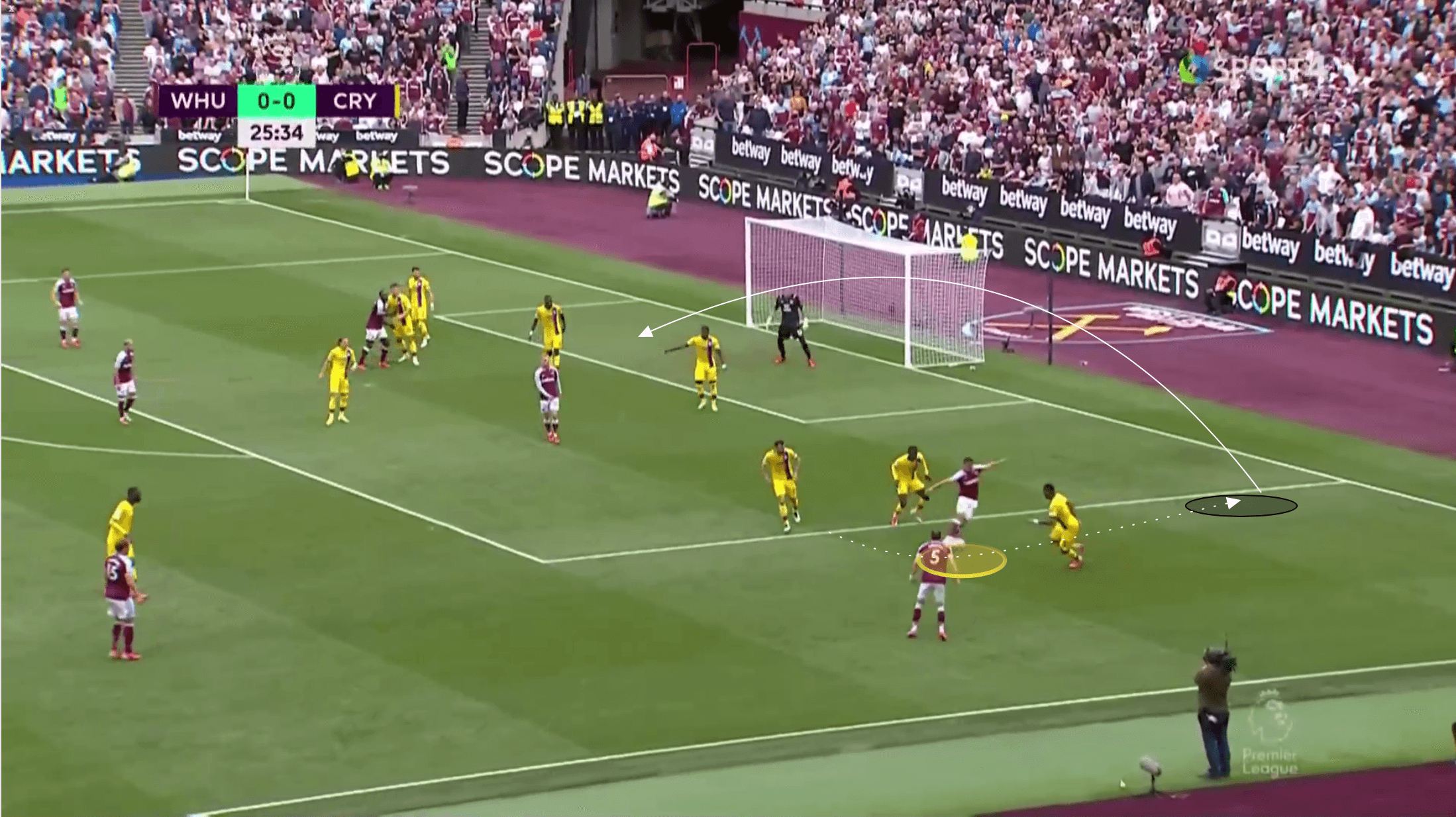 Fornals is a highly competent ball player who has a variety of passing. He has the ability to play with his left well enough but has a strong preference for his right foot. He will engage in sequences of shorter and medium length passes, but has a switch of play too. He may choose to drop into deeper areas to get in possession but equally may hold a higher starting position closer to the centre-forward. He can also break lines and will use innovative techniques, and once again disguise his intentions as he does with his dribbling to once again prevent the opponent from successfully reading his intentions. 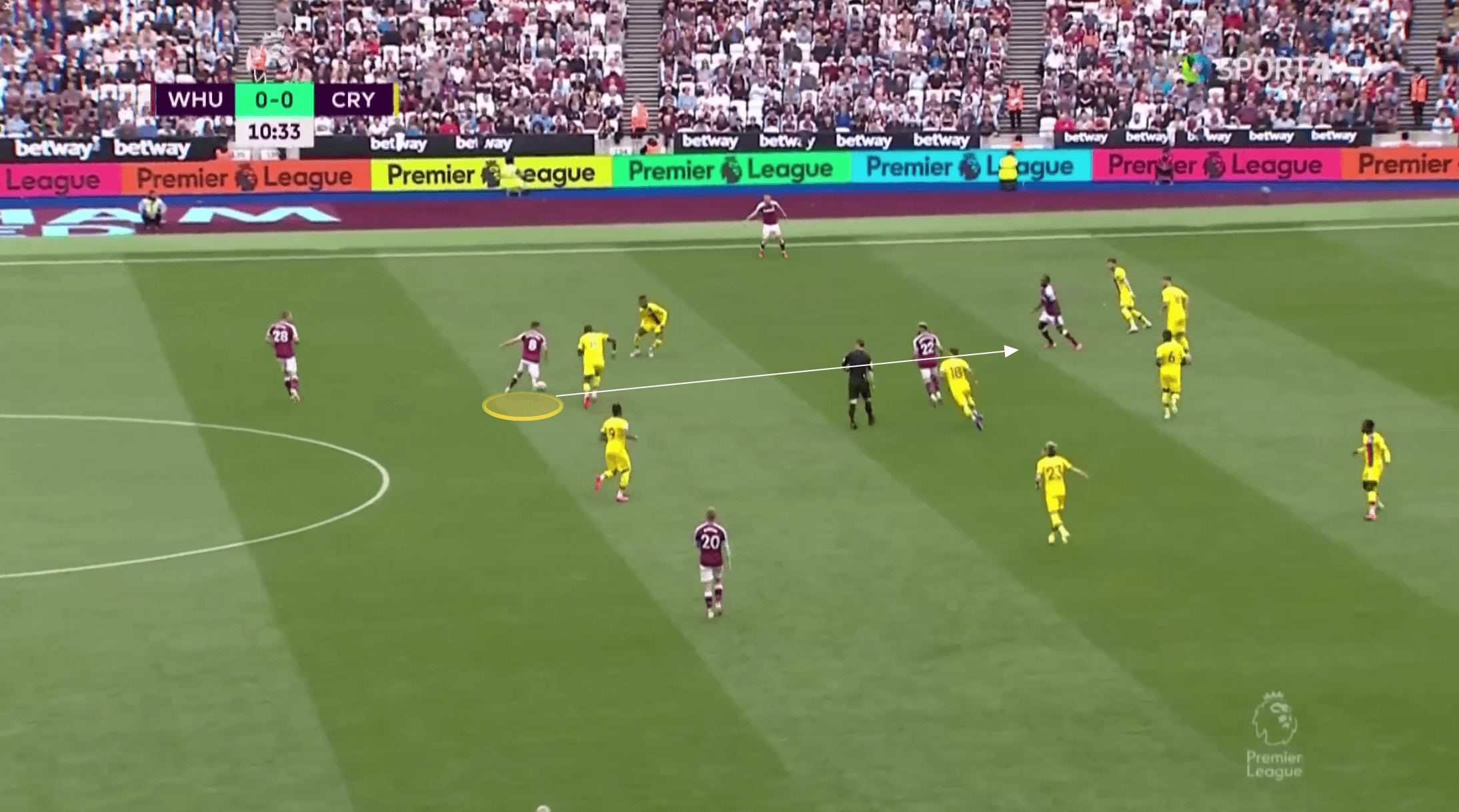 When playing shorter passes, particularly during the build-up, Fornals shows good energy once more, but also a quality reading of space around him to push forward to provide a passing option once more. Fornals frequently scans and so already has a picture of what spaces he is looking to fill after making a pass before he even initially receives possession. This can lead to Fornals receiving a number of passes over a shorter period of time, and this ability to lay the ball off and immediately find a new space lends itself to combination play – something which Fornals demonstrates a keen eye for. 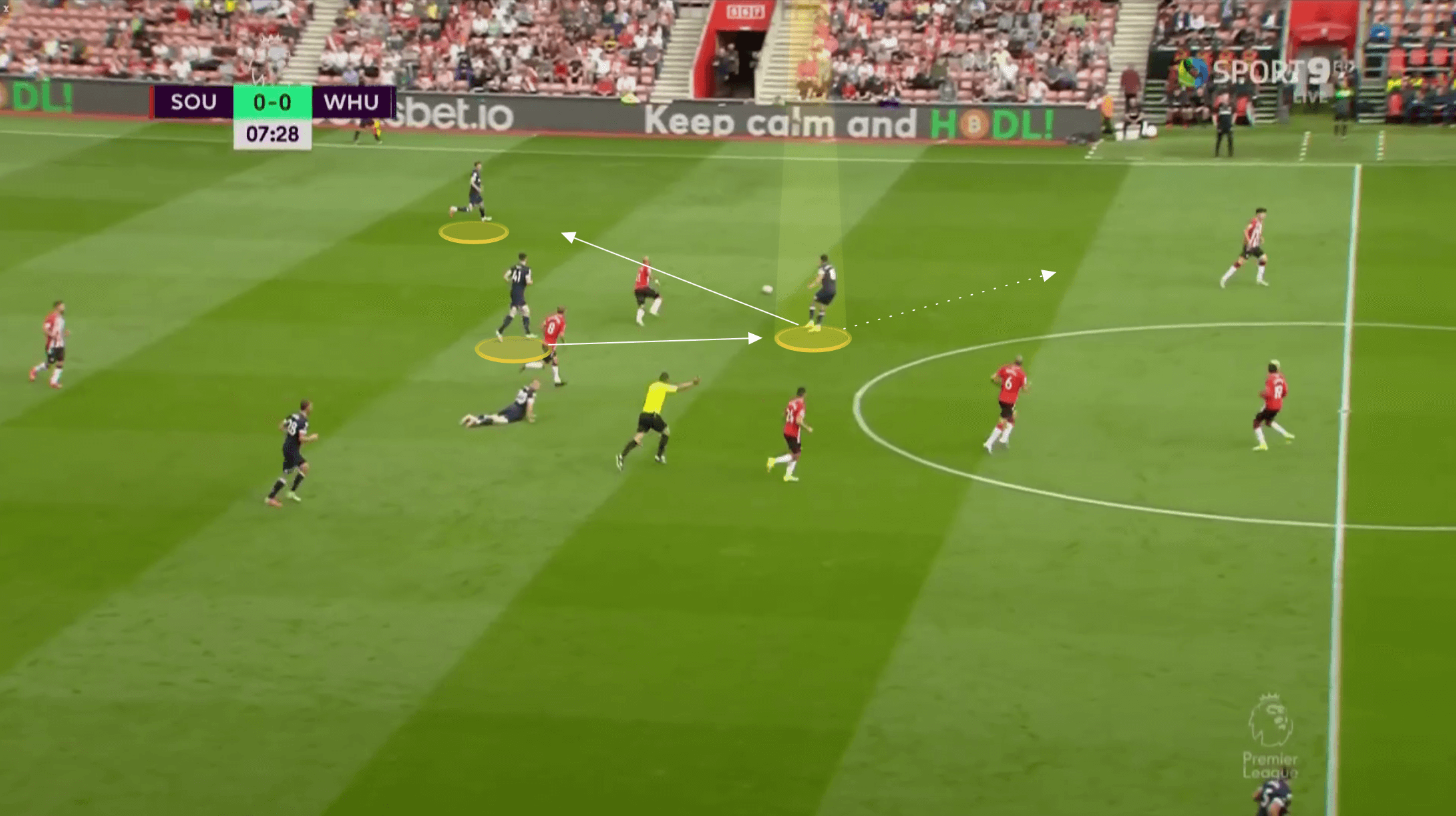 Fornals started the season in red-hot form, scoring two and notching one assist in his first three games. He has since gone dry but has nevertheless continued to influence West Ham’s attacks in an important way.

Just as noted before, Fornals knows where his next pass is going before receiving the ball, and once again his awareness of defenders looking to press him and the space around him can lead to him creating in the final third. In attacking situations where he has a limited time to play a forward pass, Fornals will have scanned well before receiving the ball and will anticipate the player behind him or around him hitting the open space. He did this for an assist against Newcastle. Receiving the flat pass he took a touch, drawing the highlighted defender towards him. On his second touch, he played in Cresswell on his outside, with the left-back slotting home in space. 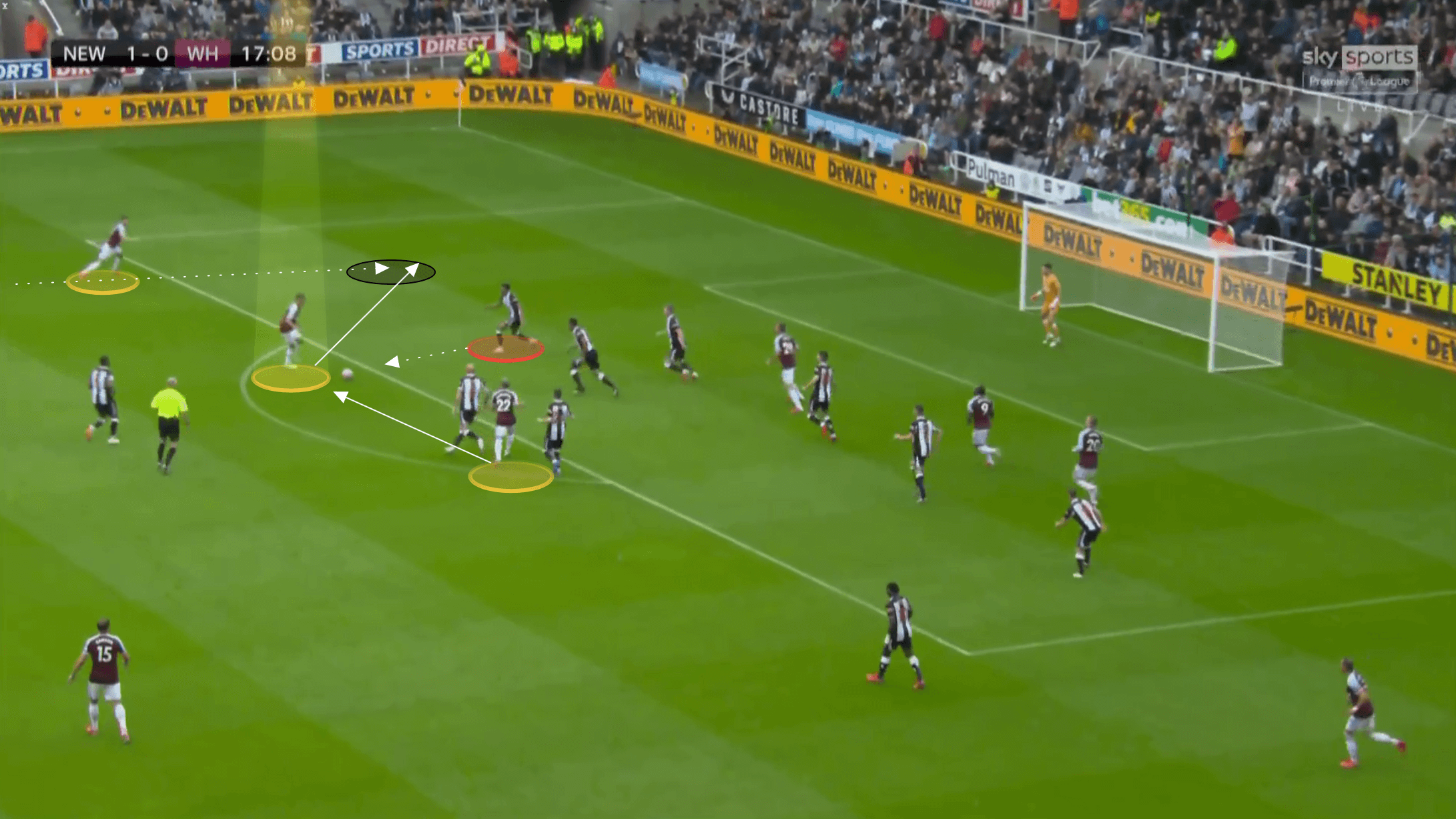 He consistently displays good awareness in tight areas when attacking in crucial moments and has the quality as a ballplayer to find teammates through tight gaps. However, Fornals isn’t the type of midfielder to play a pass and merely admire it, as we’ve seen already, and just as how in build-up play he will look to support his pass, he will similarly do so in the final third.

Fornals was able to score against Crystal Palace, playing a cute one-two with Antonio inside the area, finding a new space inside the box to receive the pass back and score from close range, despite having to navigate a crowded Palace box. 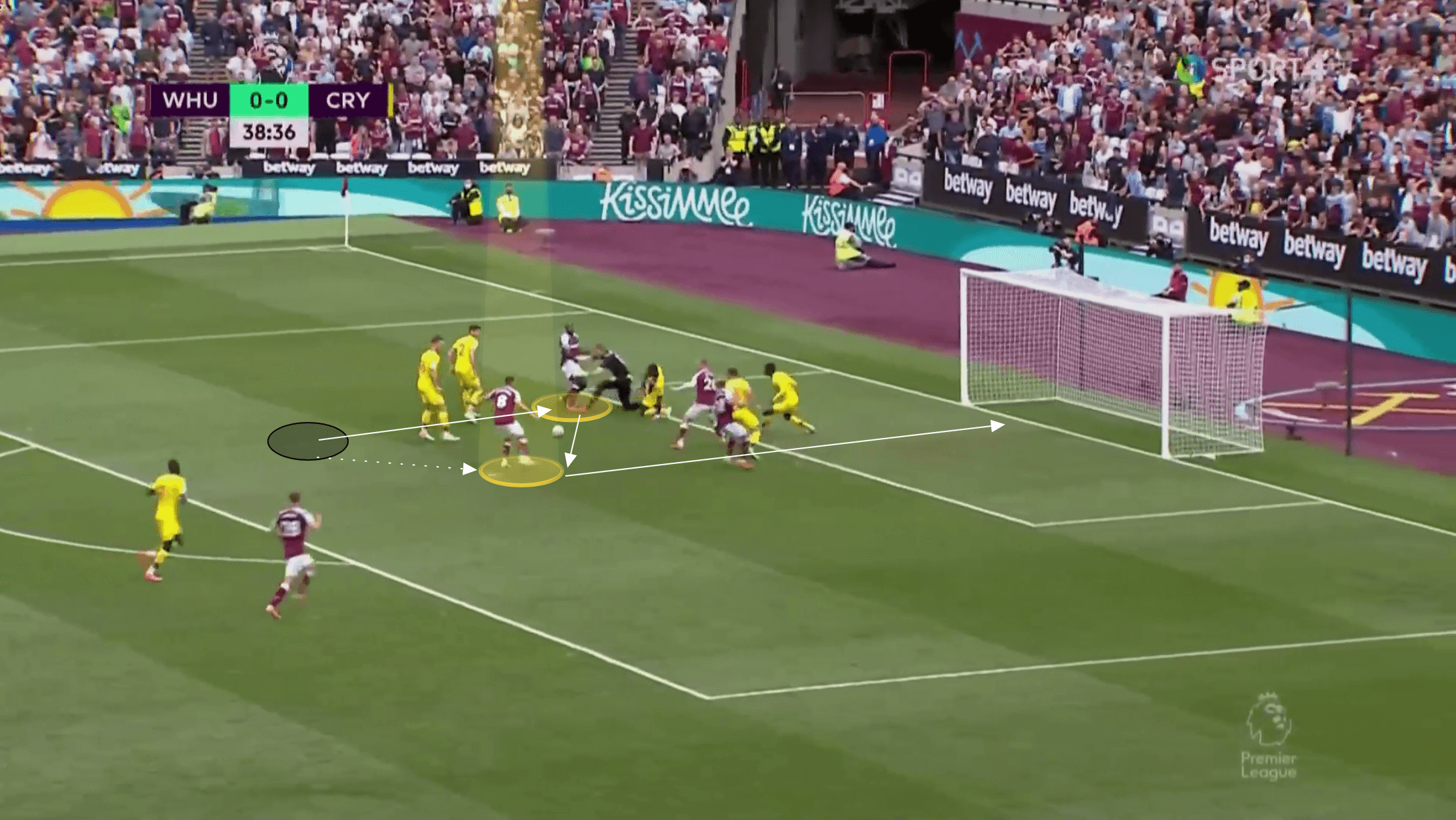 He shows quality movement in the final third, and whilst this can be down to him assessing space so well, and even using misdirection with his runs to create space between himself and his marker. It is perhaps mostly down to his quality timing. Fornals is able to read the flight of the ball well, which makes his late runs from midfield into the penalty area so lethal. This was how he was able to latch onto a cross to open West Ham’s scoring against Leicester early in the season. We can see this run in the image below as he finished first time with his left. 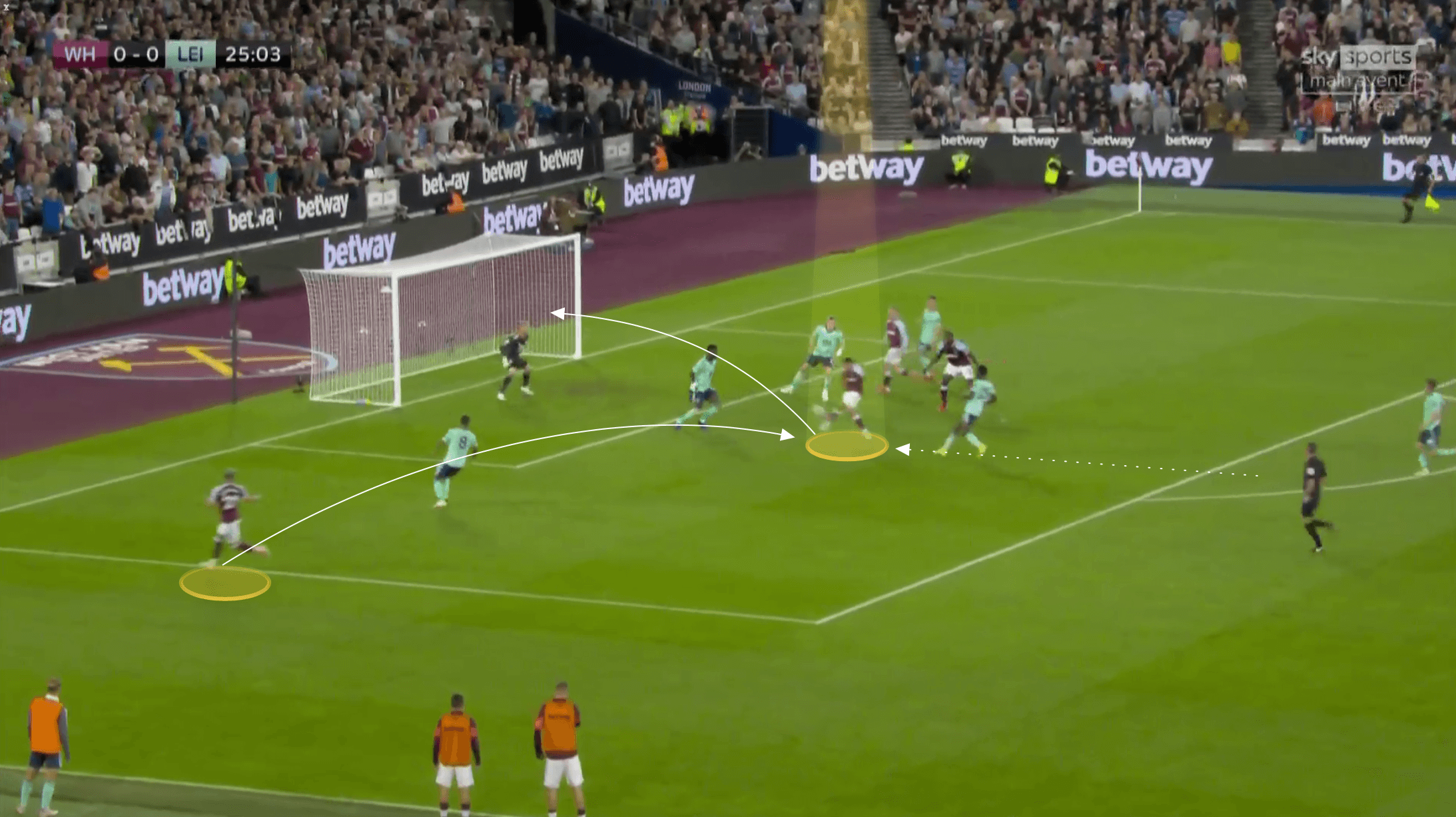 Fornals’ own crossing deserves a mention too. Whilst his 26.7% completion on his 2.02 crosses per 90 thus far this season isn’t anything particularly outstanding in terms of data, he does nevertheless have the ability to whip well-struck balls into the box at a good pace. Fornals has quality technique and shapes the ball with a decent amount of curve. He can strike the ball first time and has the ability to still find his target even in a crowded penalty area. 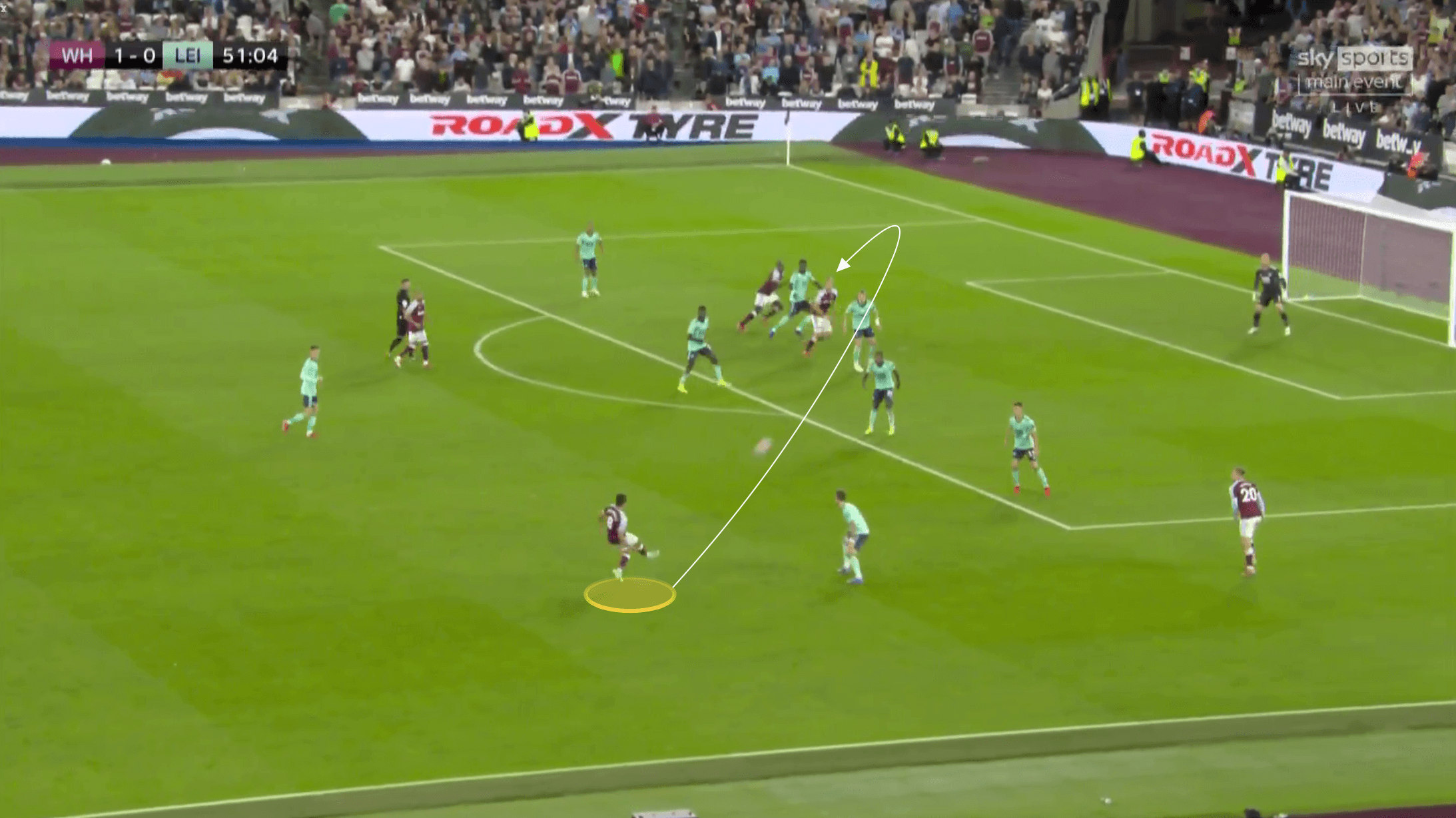 Fornals makes his decisions in possession quickly as we know, and this is no different with his crossing. He will scan before receiving and can quickly angle a cross/through pass with his second touch, showing outstanding vision to sometimes pick out a less obvious but nevertheless dangerous attacking option. 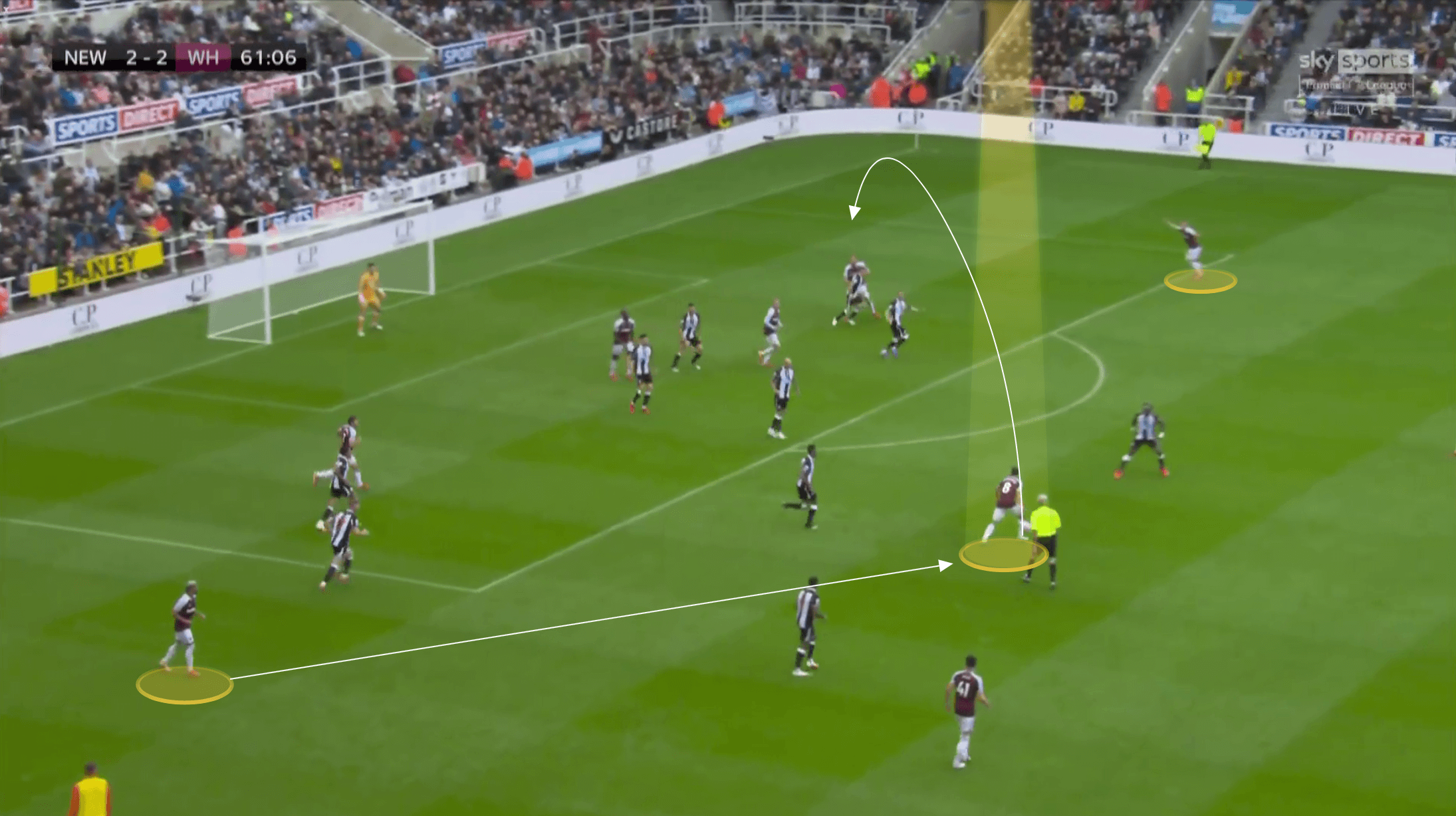 Fornals’ form has coincided with West Ham’s excellent run over the past 12 months under the watchful eye of David Moyes, and as a result, he has seen himself as not only a regular in Moyes’ starting XI, but also become a fan favourite with the West Ham faithful. With Fornals entering the third year of his five-year contract with the Hammers, this is a pivotal season for him, where his current employers will either look to keep the Spaniard at the club and extend his deal or see that there are two years left at the end of this season on his deal and potentially cash in on him over the next 18 months. It’s impossible to say what will be the outcome, but Fornals’ recent performances are likely to prompt a contract offer sooner rather than later.