When it was announced Robert Lewandowski would be sidelined for about four weeks with a fractured tibia, visions of a successful season for Bayern Munich became slightly blurred. They were on a 12-match unbeaten run which pushed the club into first in the heated Bundesliga title race. The Polish phenom has scored 39 goals in just 33 matches in all competitions for Bayern this season and currently leads the Bundesliga with 25 goals. He is also second in the race for the European Golden Boot behind only Lazio’s Ciro Immobile.

There were many theories as to how the Bavarian club would cope with this absence in attack, ranging from giving younger prospects such as Jann-Fiete Arp and Sarpreet Singh increased opportunities to moving Thomas Müller forward in a more direct role. Manager Hans-Dieter Flick ultimately opted to install 18-year-old Dutchman and Bayern academy graduate Joshua Zirkzee into the starting lineup. This tactical analysis scout report will examine the playing style of Zirkzee and discuss how he performed in Lewandowski’s stead.

Zirkzee developed his game at various youth academies in the Netherlands, including Varkenoord, Feyenoord’s famous academy, before making the move to Bayern Munich’s youth system. There, Zirkzee impressed as the regular starting striker, tallying double-digit goals at the U17 and U19 levels, and added four goals in six matches in the UEFA Youth League last season. Additionally, Zirkzee has also represented the Netherlands in various age groups but is also eligible to represent Nigeria through his parents. Lastly, he scored his third Bundesliga goal this season just 15 minutes into his first league start, in Bayern’s February match against Hoffenheim.

Zirkzee is commonly classified as a traditional number nine. At 1.93m tall, his typical positioning lies comprehensively in the final third, Often only drifting wide or back only to aid in ball distribution, assist in the counter-press, or create space centrally. 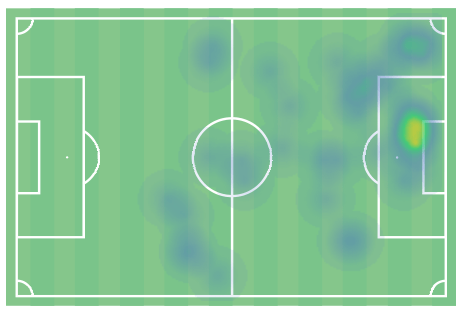 In Zirkzee’s heatmap from Bayern’s recent match against Hoffenheim, we can visualise that most of his movements and positioning was in the final third, with a significant amount being inside the 18-yard box. 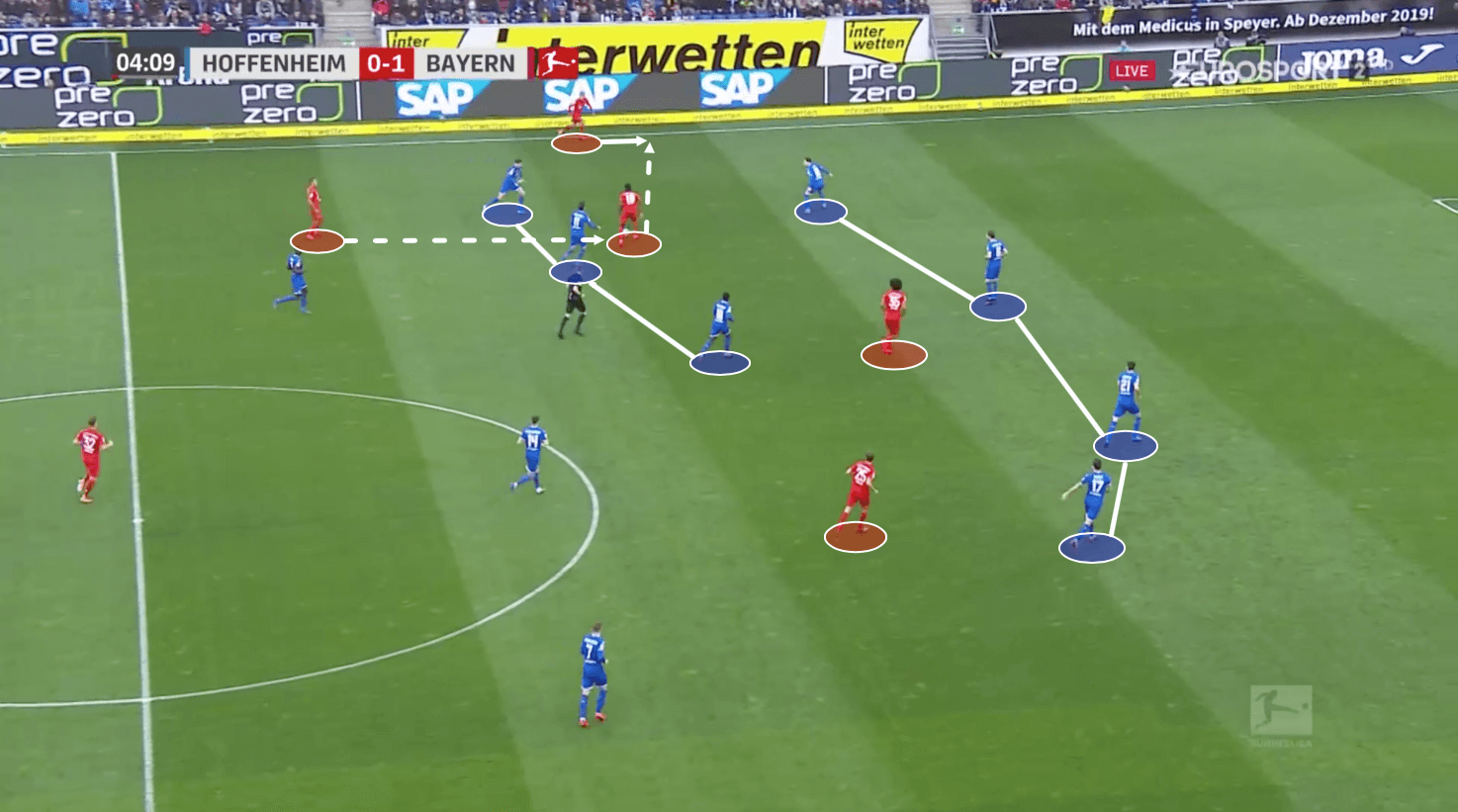 In possession, Zirkzee occupies the central spaces in front of the opposing back line throughout the progression of the ball. In this case, left-back Alphonso Davies has moved forward to combine with Thiago Alcántara and Coutinho in the wide areas, therefore allowing Zirkzee to remain centrally around the centre-backs. 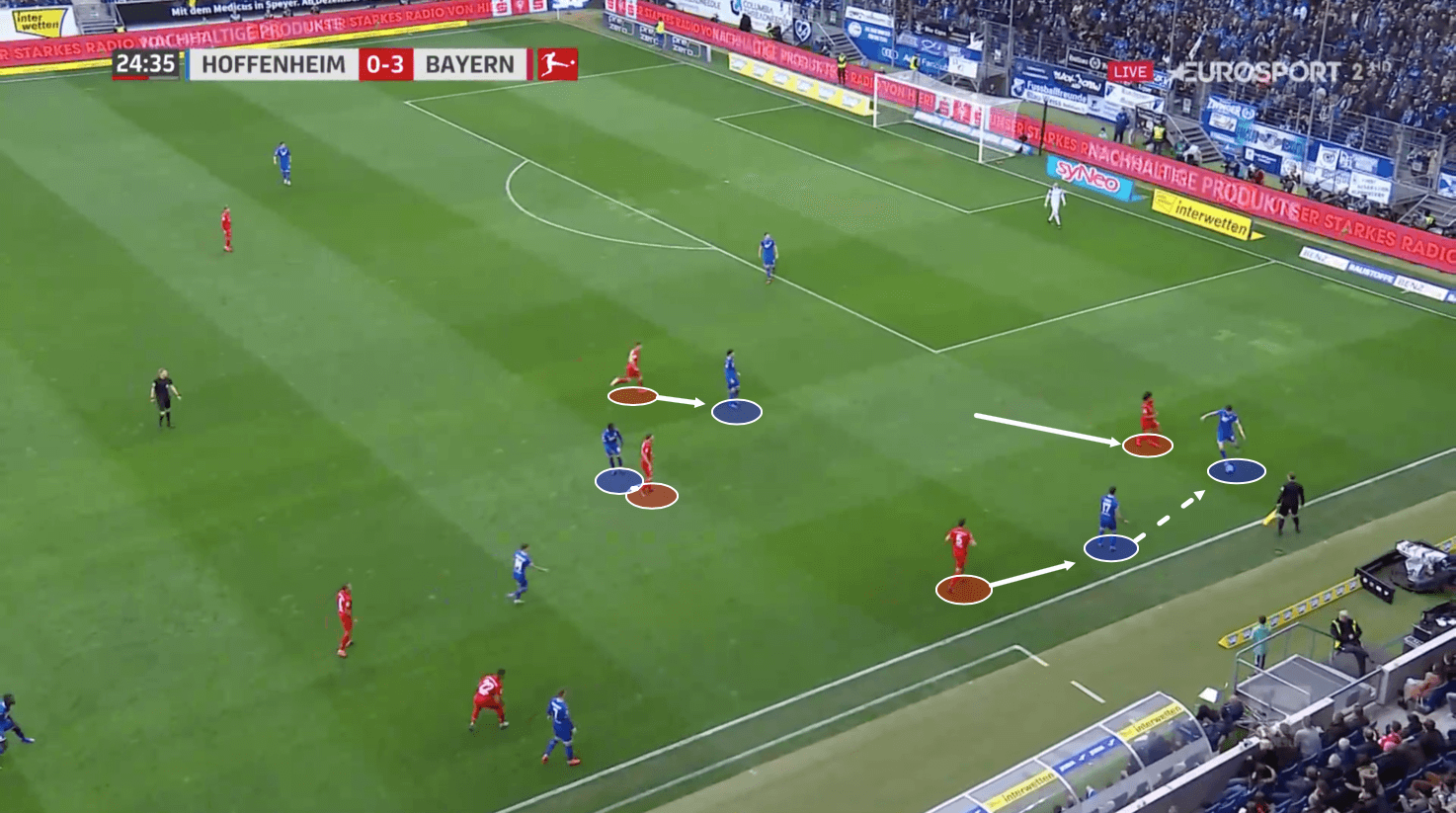 Here we see Zirkzee moving wide to press the ball directly. With the three immediate passing outlets covered, the opposition panics and hits a desperation long ball, which is easily intercepted. 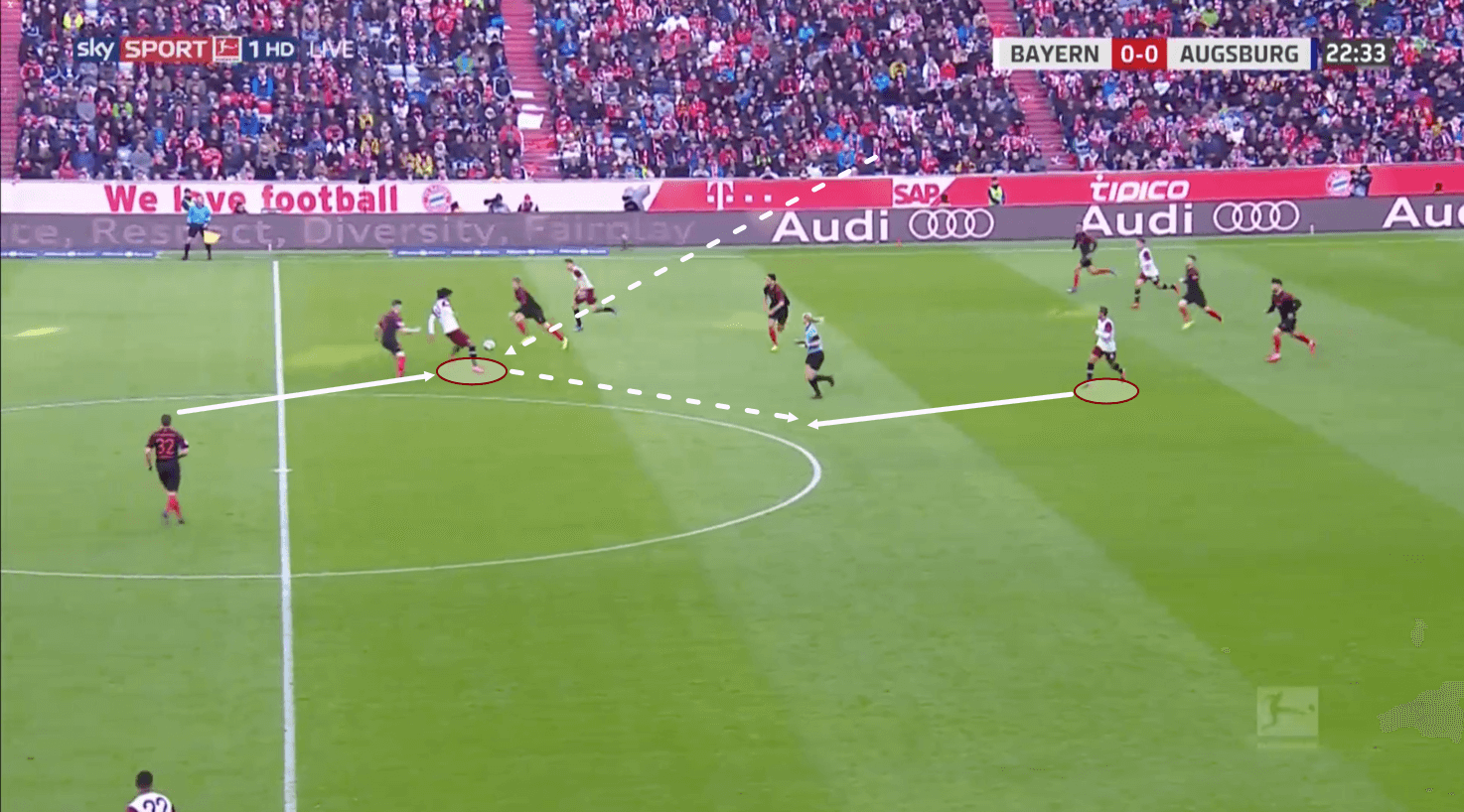 This is an example of a scenario in which Zirkzee would drop deeper centrally to help the progression of the ball. He manages to bring down the long ball, hold off the opponent, and lay it off to Thiago, which allows Bayern to continue the quickness of the attack via a switch of play.

The primary skill Zirkzee can improve upon according to Flick is his play without the ball. While there are numerous aspects of the game in which spatial movement is a key application, the tactics I noticed Zirkzee struggling with the most was his indirect pressing. 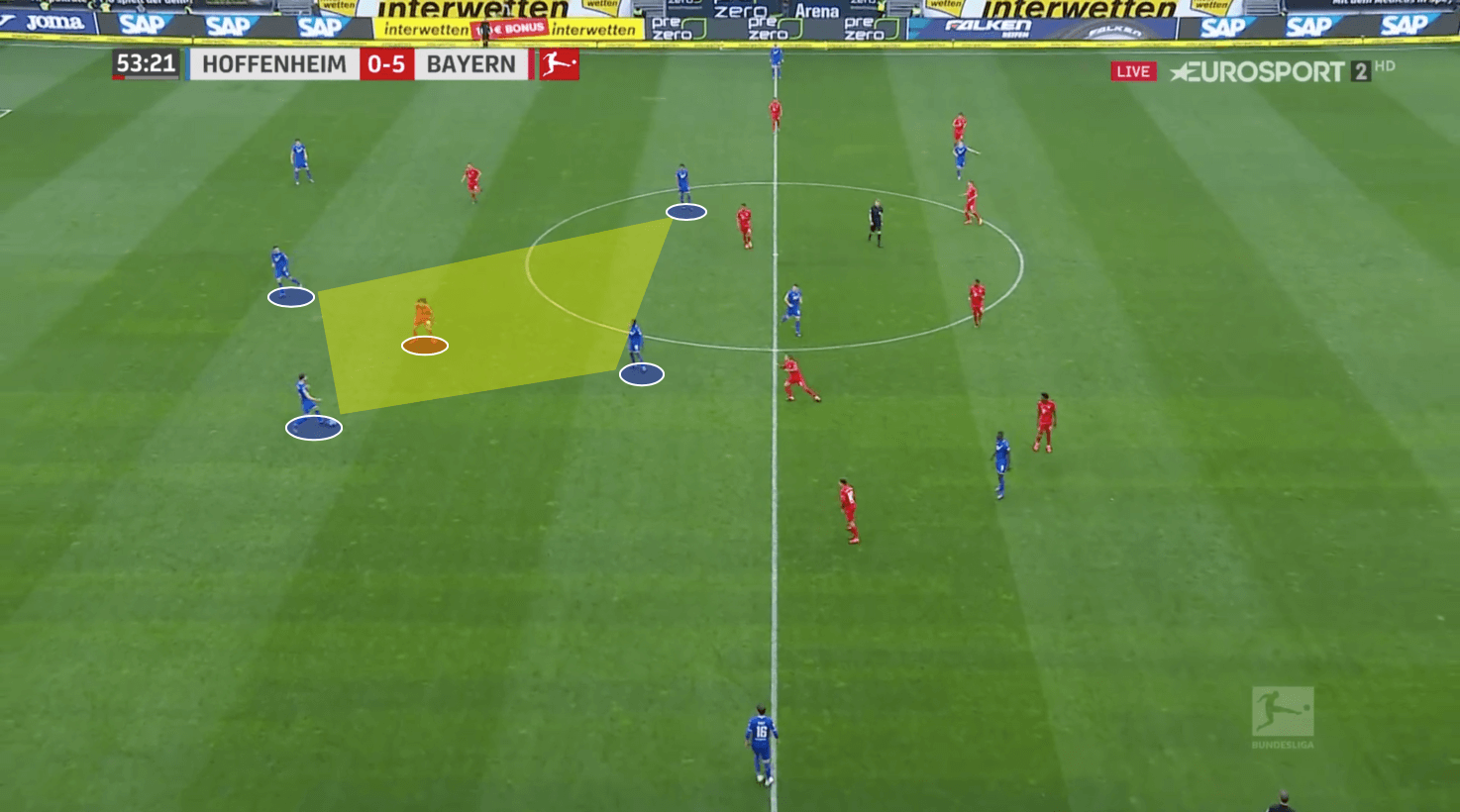 Zirkzee struggled at times to effectively block off passing lanes in the front line press. This scenario above is an excellent example. The striker gets caught in no man’s land between four Hoffenheim players, and as a result, fails to cut off any of the three passing lanes available to the centre-back.

Zirkzee proved he is still a raw product when it comes to indirect pressing, but his direct press, especially on the Gegenpress, has proven effective early in his career. 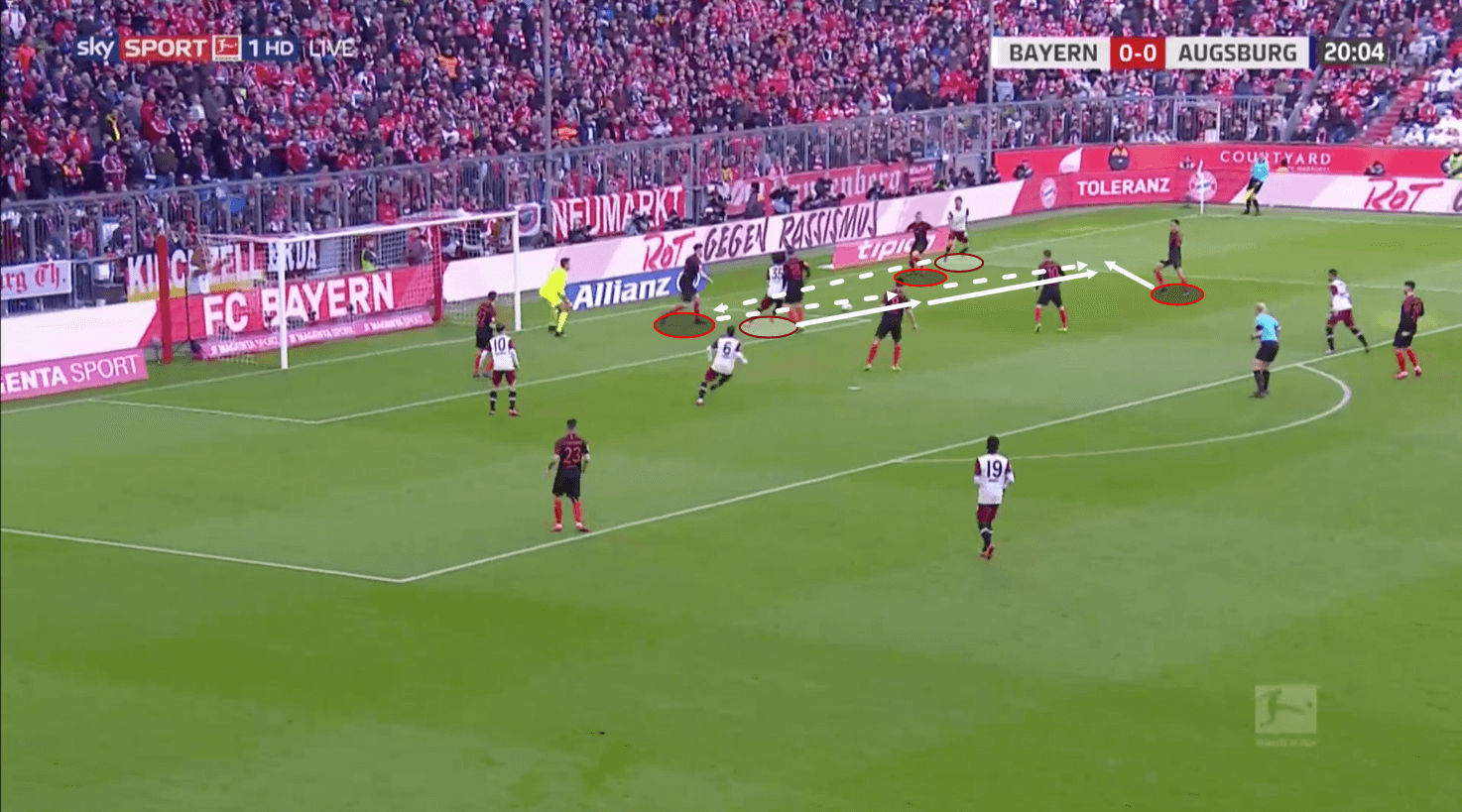 Here Bayern have just lost the ball after Müller’s ground cross was parried by the centre-back. Zirkzee aggressively counter presses the ball from the six-yard box into the wide areas, effectively pressing two Augsburg players on his way to securing a corner kick for the hosts. 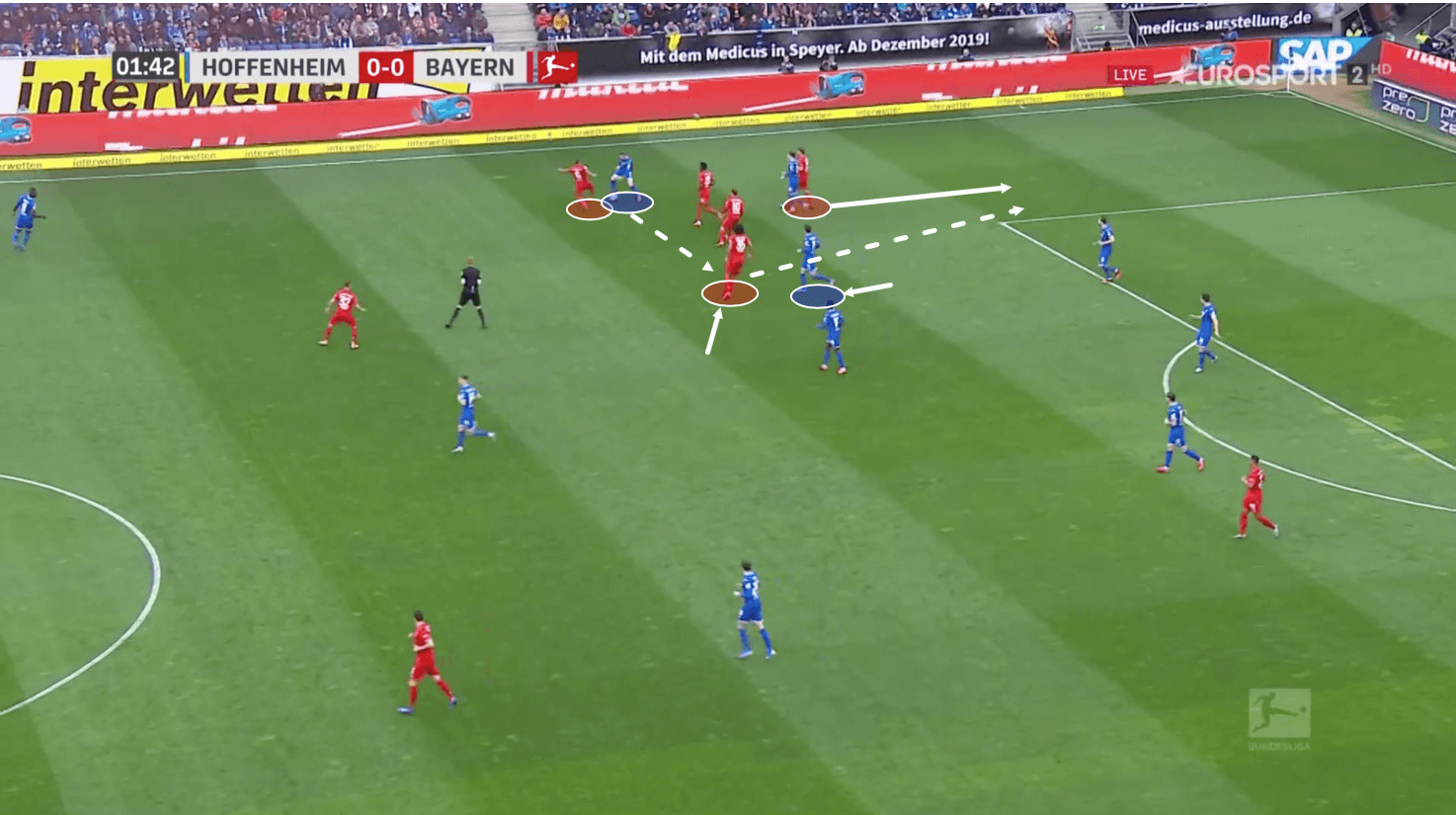 Again in this image, Bayern have just lost the ball seconds ago. With the Bavarians on a 5v3 man advantage on the ball side after the attempted clearance, they attempt a counter-press. Zirkzee notices where the ball is going and is able to intercept the pass while quickly transitioning Bayern back into a dangerous attack on a through ball down the left channel between the opposing right-back and centre-back. This pass by Zirkzee to Müller led to the German assisting Bayern’s opening goal in their 0-6 victory against Hoffenheim.

Zirkzee also seems most comfortable in the utmost advanced areas while Bayern are in possession. 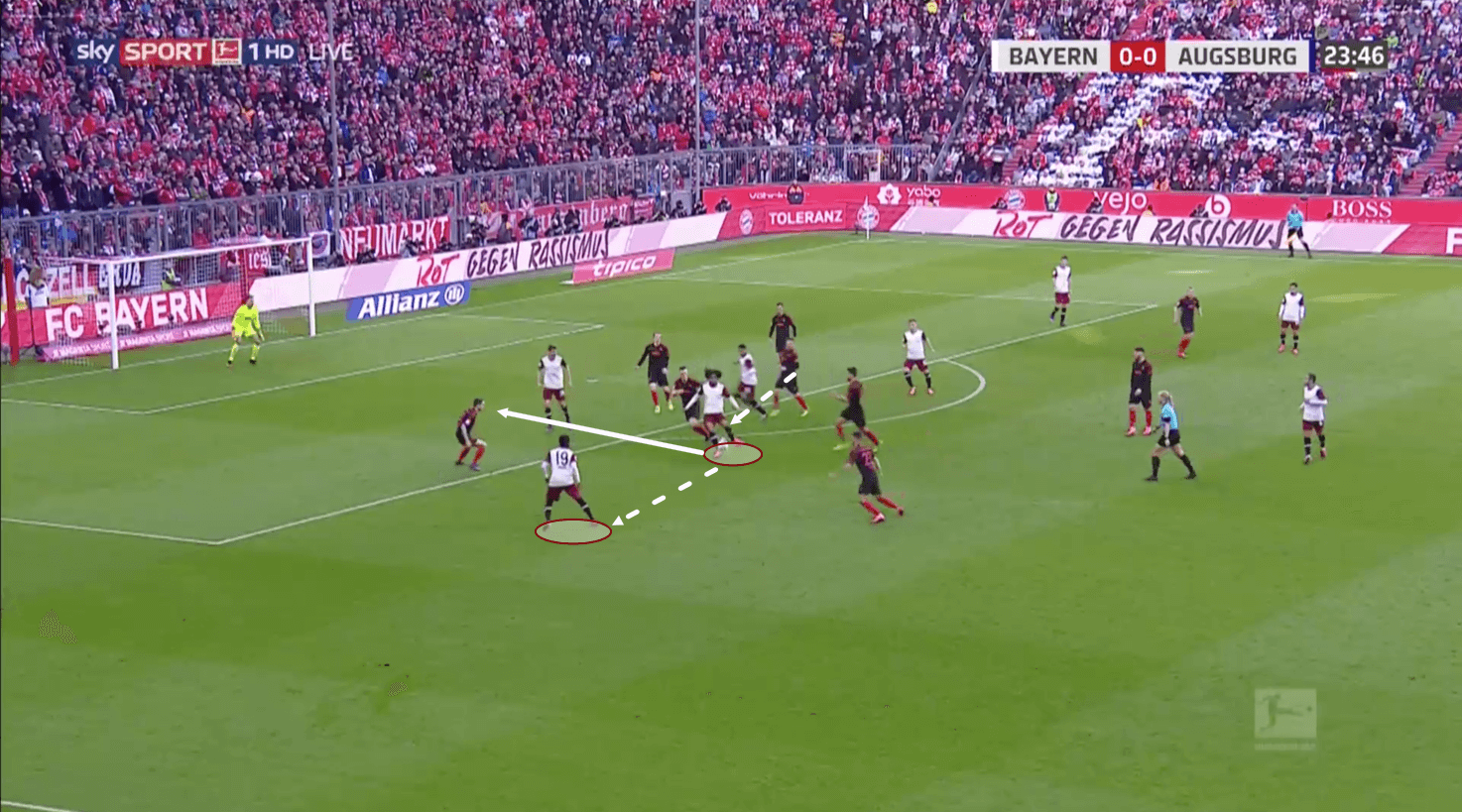 Here, Zirkzee receives an aerial pass with his back to goal. He manages to bring down the pass while turning to maintain his body positioning, which is shielding his marker from the ball. He then relieves pressure by finding the wide passing outlet and proceeds to make a run into the box. 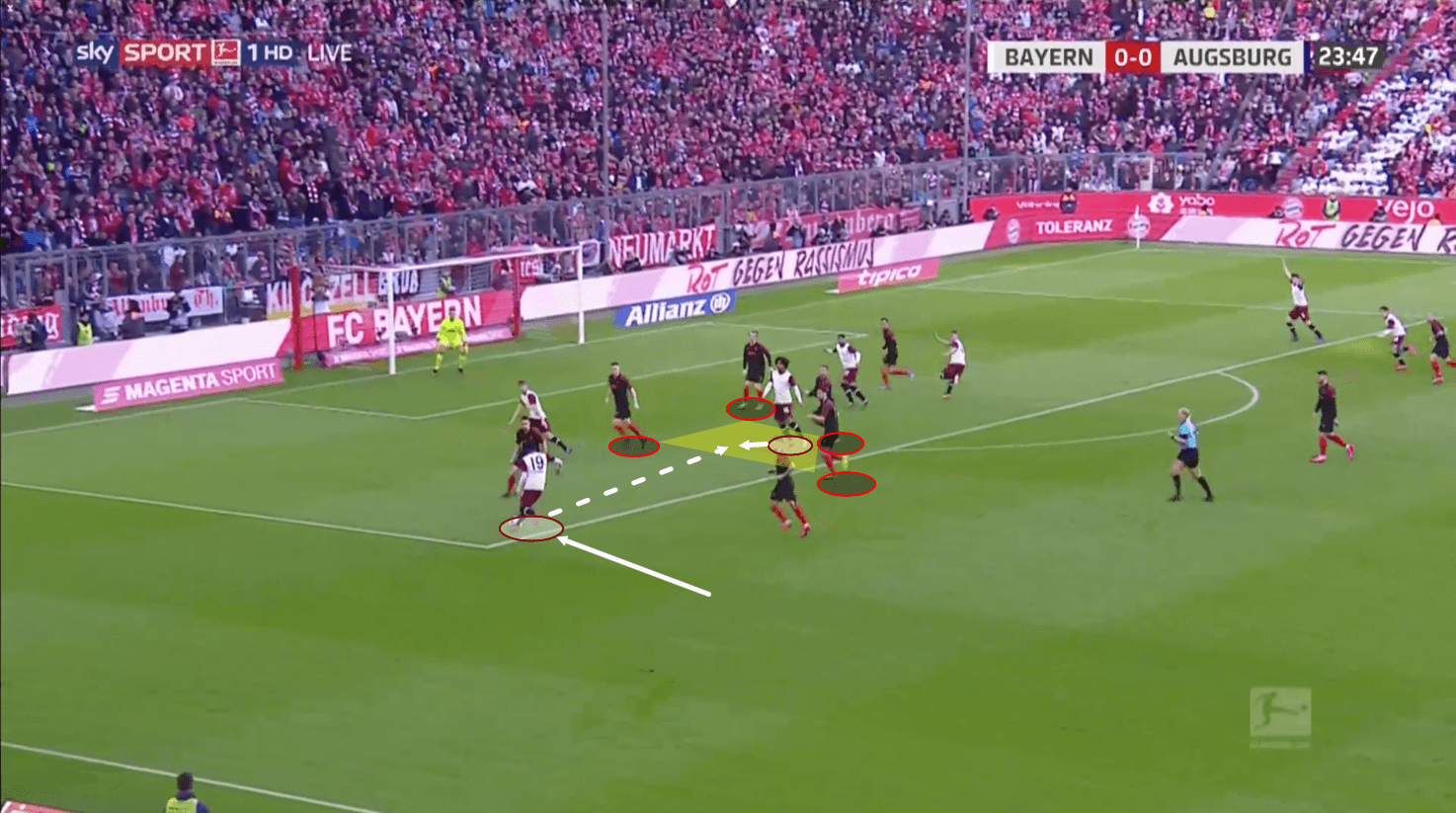 Davies sees Zirkzee occupying the space between the two centre-backs and two ball-side central midfielders and completes the pass. The young striker nearly gets a solid goalscoring opportunity, but his first touch just barely lets him down.

In the box, Zirkzee’s movement into space not only creates chances for himself, but also for his teammates. 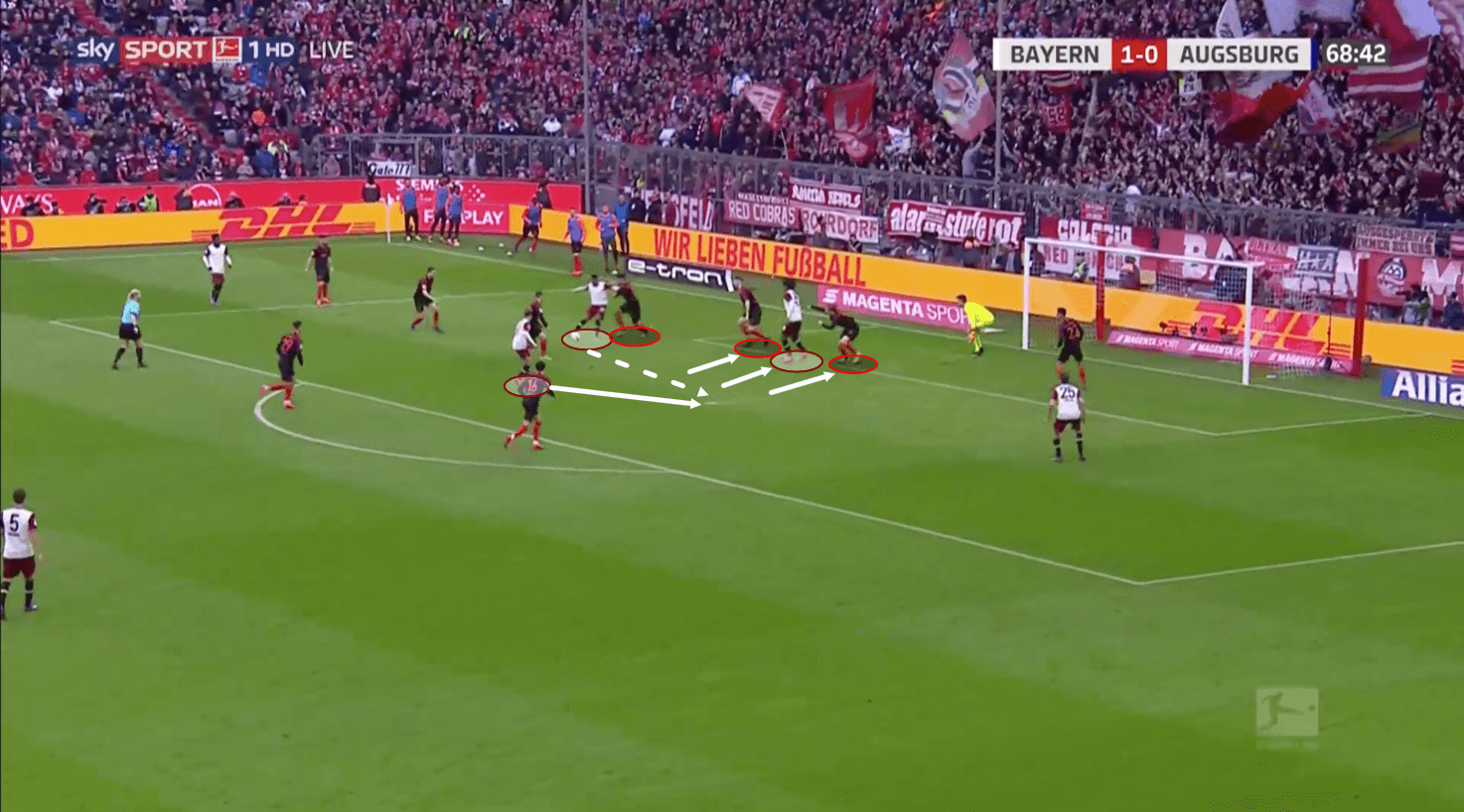 In this scenario, Zirkzee was occupying space in the 18-yard box. His aggressive movement into the six-yard box carried the two centre-backs with him. These opposition movements then opened up space in front of the back line in the low defensive block. Serge Gnabry completes the pass inside to Coutinho, who’s shot in a dangerous area is expertly saved by the keeper.

Through analysis, Zirkzee performed this specific luring action two other moments during Bayern’s 2-0 win against Augsburg. He may lack consistency off the ball, But Zirkzee has shown he is a natural forward in the final third.

In the 169 total minutes in which Zirkzee played as the striker with Lewandowski out, the Dutchman scored one goal and totalled an xG of 2.13. As mentioned, the forward enjoyed prolific goalscoring campaigns throughout his youth, and has, so far, carried that finishing into his professional career. 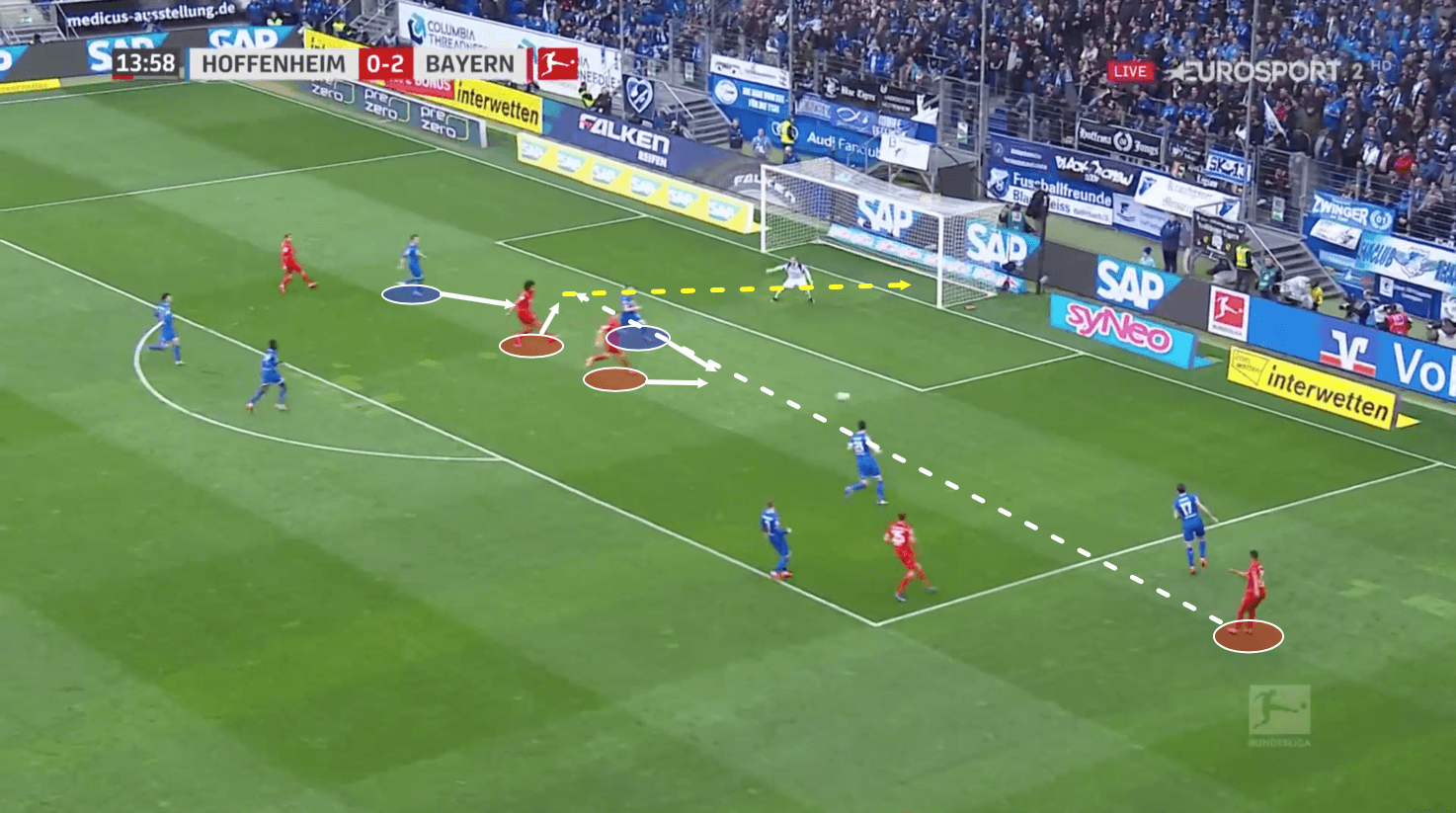 Zirkzee scored Bayern’s third goal of the match using smart positioning in the box and excellent ball control. Kimmich makes a dummy run in front of Zirkzee to lure the centre-back away from the young striker. Gnabry’s cross squeezes through and reaches Zirkzee, who controls the ball and skillfully shields it from the right-back long enough to score. 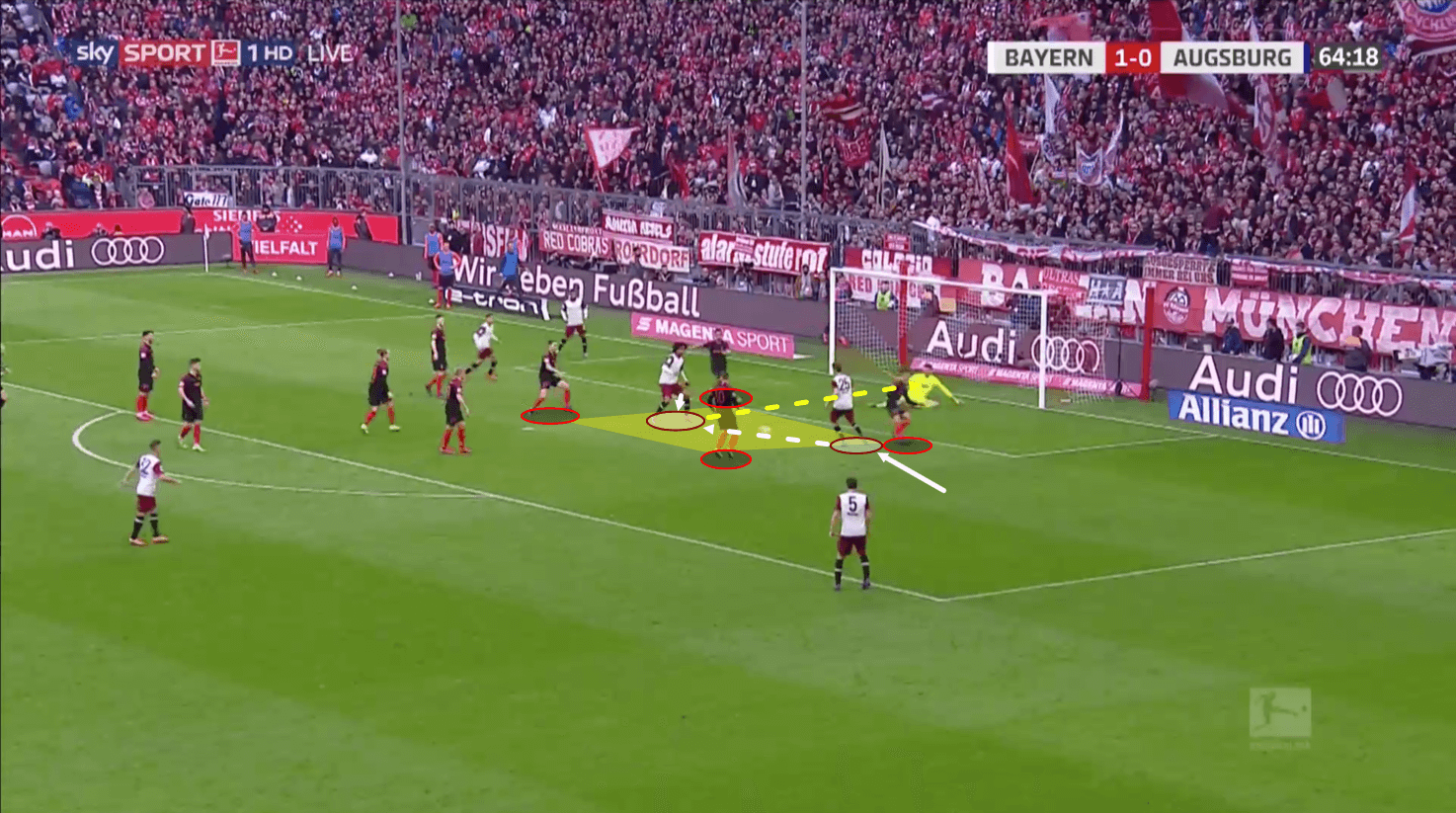 Yet again Zirkzee shows the ability to find space between four defenders in the opposing box. Müller successfully presses the ball off the opponent, and his touch falls to Zirkzee in this space. Despite a high expected goal rating of 0.49xG, Zirkzee’s shot was saved by the outstretched keeper. 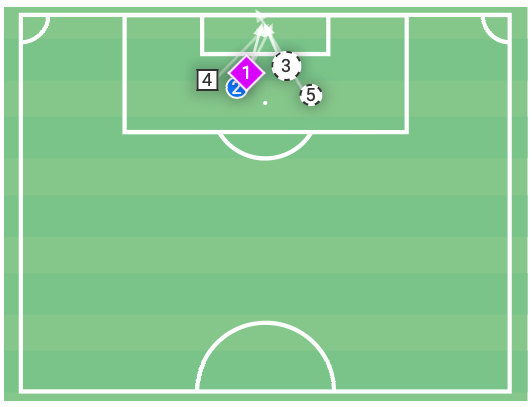 In Zirkzee’s shot chart against Hoffenheim, we can see that virtually all of his shots were from high-quality areas of attack. This not only contributed to his high xG count that match but also displays Zirkzee’s insistence on advanced positioning as a striker.

In a statistic to be taken with a grain of salt again due to small sample size (but an intriguing statistic nevertheless), Zirkzee scored three goals in his first 26 minutes in the Bundesliga. This is only three more minutes than Borussia Dortmund phenom Erling Håland needed to score the same amount of goals.

With the world in various levels of confinement, it is difficult to estimate when or if the 2019/20 Bundesliga season will be completed. Bayern Munich are currently atop the table, but the title race is far from over. Joshua Zirkzee has proven overall with his advanced positioning and ball control that when Bayern need a goalscorer to contribute outside of Lewandowski, they can look within their own system. This scout report concludes Zirkzee is a raw, yet budding striker with the potential to star in the upper echelons of European football.