The 21st round of this Bundesliga season took us to the Olympiastadion for the clash between Hertha Berlin and FSV Mainz 05. An interesting encounter between two teams who are trying to escape the relegation spots. Just as in the earlier fixture this season, Mainz grabbed the win. As a result, the gap between the two teams is down to two points in favour of Hertha BSC.

In this tactical analysis, we take a look at how Hertha adjusted their tactics for this game against Mainz. Furthermore, we analyse how Mainz tried to press when Hertha were building-up from the back. We also take a look at Hertha’s attacking structure. Lastly, the analysis examines the tactical change from Hertha after the break and how Mainz adjusted to these tactics. 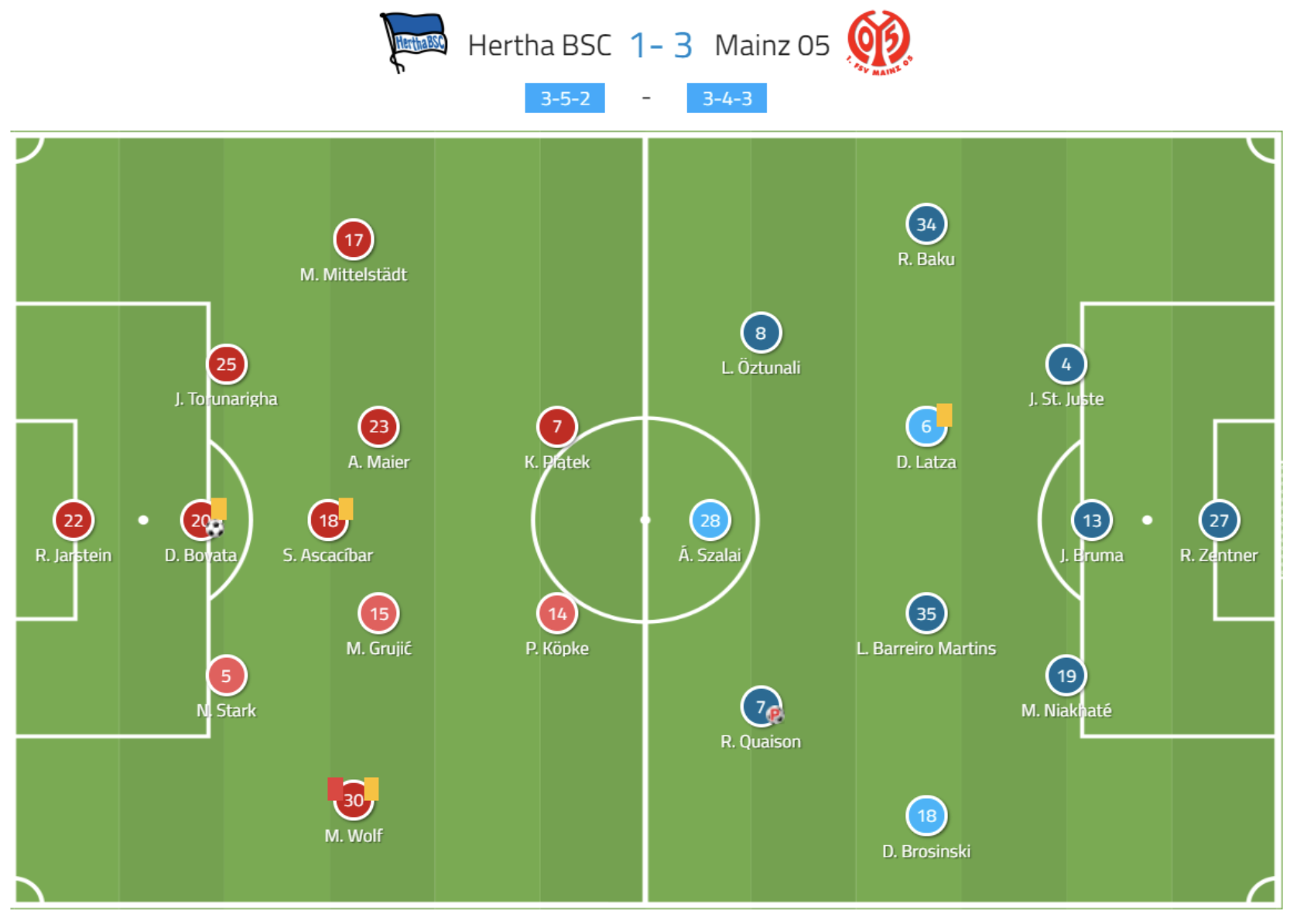 Jürgen Klinsmann adjusted Hertha’s tactics for the game against Mainz. Instead of using his preferred 4-1-4-1 formation, the German head coach decided to start in a 3-5-2 formation. As a result of this adjustment Lukas Klünter, Javairô Dilrosun and Dodi Lukébakio started on the bench. Niklas Stark, Krzysztof Piatek and Pascal Köpke started instead of them.

Achim Beierlorzer also changed his tactics in comparison to their last game against Bayern Munich. Instead of starting in a 4-2-3-1 formation, Mainz started this game in a 3-4-3 formation. Due to this tactical change Pierre Kunde, Jean-Paul Boëtius and Jean-Philippe Mateta were left on the bench. Jeffrey Bruma, Danny Latza and Ádám Szalia started in their places.

Defensively, Hertha played in a 5-3-2 formation. When Mainz was in possession, Klinsmann’s side dropped back and defended around the midway line. From there, Hertha started to press with their two strikers. The midfielders had to close the passing lanes towards the centre of the pitch, while the wingbacks were ready to press Mainz’s wide midfielders.

The picture above is an example of Hertha’s defensive structure. St. Juste had the ball. Piatek pressured Mainz their centre back, while Hertha’s midfielders closed the passing lanes towards the centre of the pitch. Hertha’s left-wingback Maximilian Mittelstädt already positioned himself in such a way that he was ready to pressure Mainz’s right midfielder.

A few seconds after that, St. Juste passed the ball towards his right midfielder. Mittelstädt immediately started to press his opponent, while the midfielders moved towards the ball. As a result, Ridle Baku had no passing options towards the centre of the pitch and had to play the ball back.

These Hertha tactics were successful in the first half. Mainz struggled to attack Hertha’s half and only produced three shots, of which two were off target. Despite that, Mainz scored the only goal of the first half. This was due to bad positioning from Hertha during their own throw-in.

The analysis beneath shows the positioning of Hertha during that throw-in. Mittelstädt threw the ball to Köpke, who tried to play the ball back to his wingback. The attack mishit the pass, which resulted in a quick counter-attack from Mainz. Due to Marius Wolf his wide positioning, Mainz had a three versus three situation. Beierlorzer’s side used this to their advantage and finished the attack to make it 0-1.

Mainz tried to press Hertha in their build-up phase

In their 3-4-3 formation, Mainz tried to press Hertha early on. They used their three strikers to do this. The two wingers positioned themselves in such a way that Hertha’s right and left centre back were free. Mainz started to press when Hertha played the ball to one of the three centre backs. At those moments, the whole squad moved up the pitch and pressed until they either got the ball back or when Hertha played a long ball towards their strikers.

The analysis above shows Mainz’s pressing tactics. Dedryck Boyata was in possession. After the ball was played to him, the central striker Szalai started to press. After Szalai started to press, his teammates moved up the pitch and made it hard for Boyata to find a passing option. The centre back tried to chip the ball to one of his midfielders. The pass failed, and Hertha lost possession.

When Hertha found a way through Mainz’s press, Beierlorzer’s side dropped back towards their own half and defended in a 5-2-3 formation. The picture beneath shows this defensive structure at Mainz’s own half. The wide midfielders dropped back to support the back three, while the two central midfielders positioned themselves just in front of these five defenders.

How Hertha used a midfielder to play through Mainz’s pressing

Hertha recognised that Mainz pressed Hertha’s back three with three strikers. Because of this one versus one situation, it became harder for Hertha to play through Mainz’s press. As a result, Hertha started to use a dropped back midfielder to create an overload in the build-up phase.

The picture beneath is an example of this. Attacking midfielder, Arne Maier dropped back to support his back three in their build-up. Due to Maier his support, Hertha’s left centre back Jordan Torunarigha moved a bit wider. As a result, Hertha created a four versus three situation, which enabled them to progress to the opposition’s half.

Hertha’s tactical change during the break

Despite having most of the possession during the first half, Hertha struggled to create big chances. As a result, Klinsmann decided to change the tactics. The head coach subbed Stark and Marko Grujić off, while Dilrosun and Lokébakio came in. Klinsmann made these changes to also change Hertha’s formation. They used a 4-4-2 formation instead of a 3-5-2 formation in the second half.

The second option was dropping back beside the two centre backs. The picture beneath is an example of this. In this picture, Torunarigha had the ball. The fullbacks positioned themselves high up the pitch to provide the width. Central midfielder Maier again dropped back to support his centre backs to build-up the attack. However, this time the midfielder dropped back besides Torunarigha.

Despite these tactical changes and a having a lot of the ball, Hertha still struggled to create big chances. This was mainly due to their struggle to get into the final third. When we take a look at the passing map below, we see that Hertha had a lot of unsuccessful passes in the final third, especially in the centre of the pitch. As a result, the team had a very low xG value at the end of the game (0,77).

Early after the break, Beierlorzer called one of his players and gave him instructions. Just after those instructions, Mainz changed the way they tried to press Hertha. In the first half, Mainz used three attackers to press Hertha’s back three and dropped back in a 5-2-3 formation when the press failed. Due to Hertha’s change of tactics, Mainz changed their formation to a 5-4-1 formation when they defended.

Beierlorzer made this change to stop Hertha’s interplay between the back and the wide midfielder. As the picture beneath shows, Hertha tried to create a two versus one situation on the flanks with Mainz’s wingback. They wanted Mainz to keep pressing with three players, so they decided to drop back one of their midfielders.

Due to the tactical change, Beierlorzer created a two versus two situation on the flanks. The wingback had to communicate with the winger who was responsible for which player. One of the options was that the winger had to cut the passing lane towards Hertha’s wide midfielder, which enabled Mainz’s wingback to focus on Hertha’s fullback. The other option was that the wingback focused on the wide midfielder while the winger focused on the fullback.

Despite having a lot of the ball, Hertha struggled to get into the dangerous areas of the pitch. Klinsmann tried to change that by changing the tactics. However, this had no success due to Mainz their adjustment. The attacking struggles, in combination with the little errors in defence, led to the defeat in this game.

Mainz will be very pleased with the result of the game. Especially the defensive structure was good during this game. Beierlorzer also adjusted the tactics successfully after the break, which stopped Hertha’s attacking thread. It will be interesting to see if both teams can get away from the relegation zone.