Another important game for Leeds United in the new calendar year. In this campaign, Marcelo Bielsa’s team started strongly in the early stages of the season, and, they had to try to avoid the story of last season to secure promotion to the Premier League. In this fixture, they travelled to the City Ground but failed to challenge Nottingham Forest.

Forest had five wins, and one draw in their last seven, Sabri Lamouchi’s team climbed to the fourth of the table in January. The Frenchman also became the latest manager to win the EFL Championship manager of the month.

In this tactical analysis, we will show you how Forest secured a two-goal victory against Leeds. It is an analysis that focuses on tactics.

Forest only had one change after their loss last week. Ryan Yates was on the bench; he was replaced by Samba Sow, who partnered with Ben Watson at the midfield. In this game, Tiago Silva played on the left, Joe Lolley played behind Lewis Grabban, and Sammy Ameobi played on the right. They started in a 4-2-3-1 formation.

Bielsa’s team played in a 4-1-4-1 formation. They started the exact same team as they did in the last game. Stuart Dallas moved the right-back position; Luke Ayling partnered with Liam Cooper at the centre of the defence; Ben White was pushed to the midfield, playing as a sole pivot.

In this match, Forest were aware of the attack of Leeds, hence, they were willing to give up possession and defend with a midblock. They only had 37% of possession.

For their block, an important part was to keep the sole pivot of Leeds under control, hence, it forced Leeds to move the ball wide early or play long. In general, they maintained their shape, 4-2-3-1 in their block, with Grabban leading the line.

The front players need not stay compact horizontally, as Pablo Hernández and Mateusz Klich seldom dropped to the midfield. The major task was to mark White.

As illustrated in this image, Forest’s attacking midfielder, Lolley kept White under control. On this occasion, they successfully forced Leeds to play long. 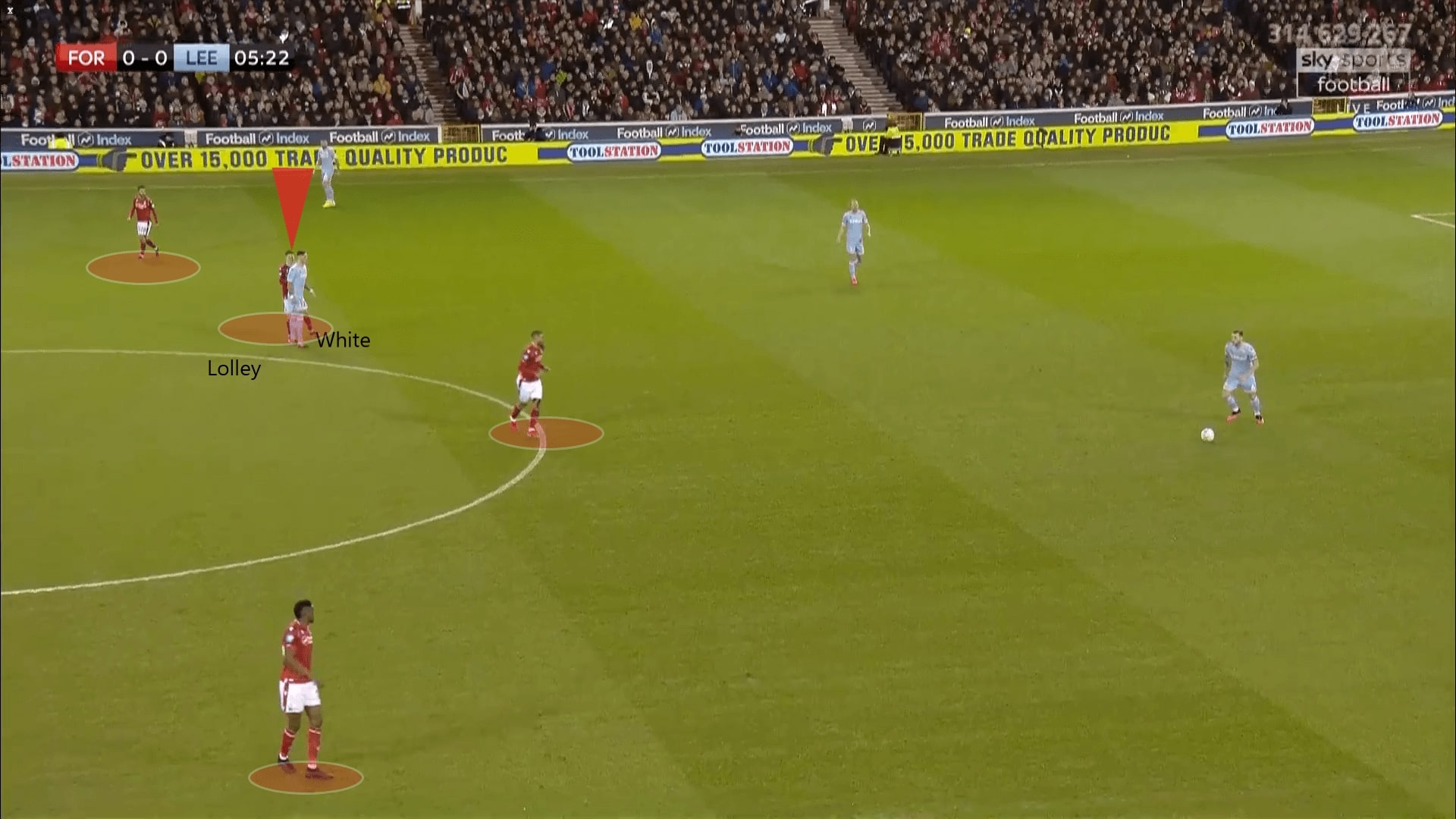 On other occasions, which Leeds play the ball wide to the full-backs, Forest would not hesitate to press on the flanks.

In this example, Forest lured Cooper to find the left-back, Ezgjan Alioski, by the tight marking of Lolley on White. Then, this side became the weak side of Leeds as they did not have supports for the left-back.

In the image, there were Ameobi and Sow on this half of the pitch, against one Alioski. And, under the pressure of Ameobi, the left-back played long and the ball was predictable and intercepted by Matty Cash. 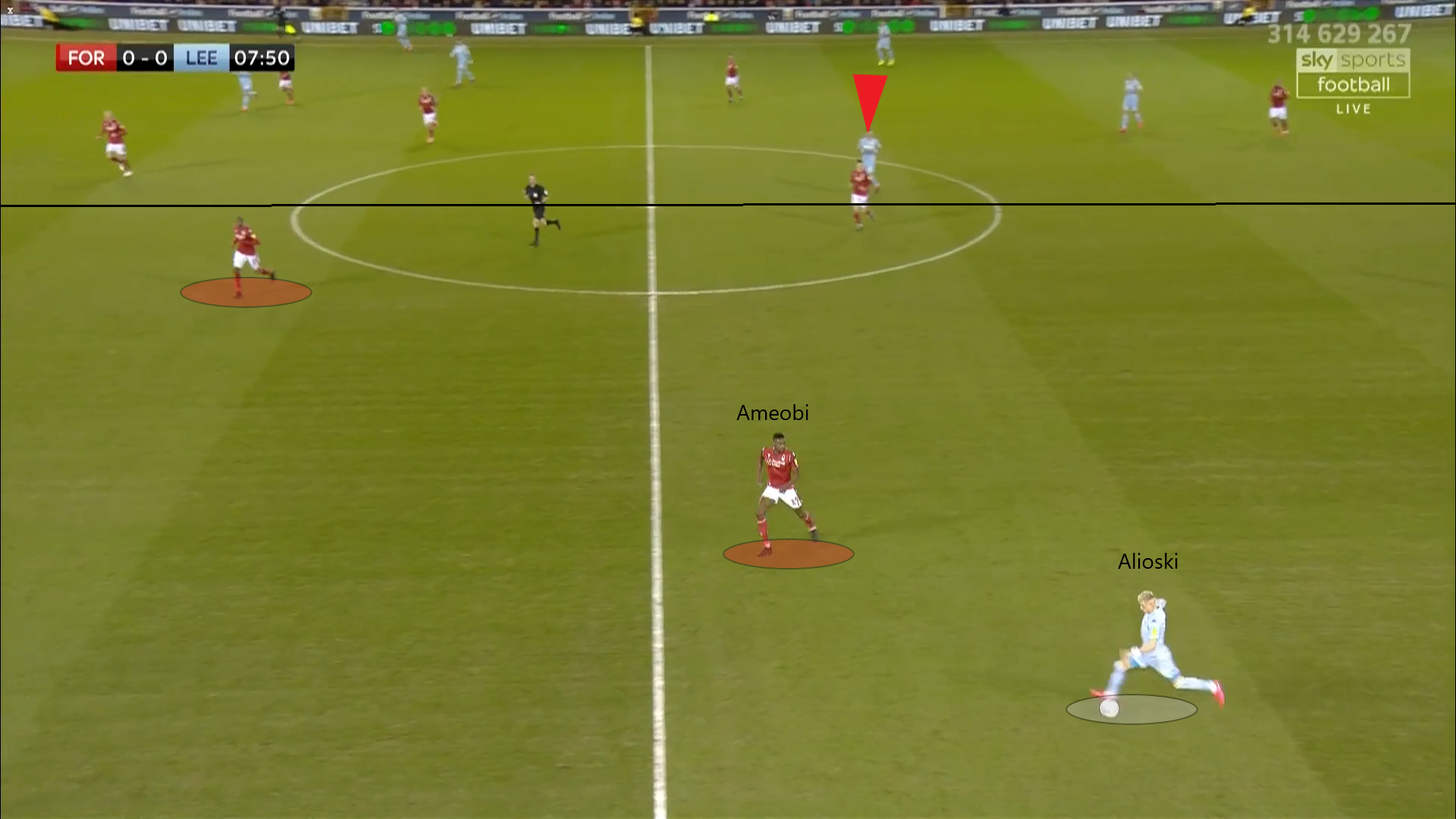 The build-up of Leeds

As for Leeds, they insisted to play out from the back for most occasions. They had 63% possession and 487 passes. They quickly opened their shape in the build-up, and, with White staying with the central defenders, it was a flexible back three in this phase of the attack.

In the following image, it reflected the structure of Leeds’ build-up. White could receive the ball as he dropped to the defensive line, staying far from Lolley. Leeds opened their shape, with both full-backs positioned wide to stretch the oppositions.

However, it also hinted an issue of Leeds’ build-up. They lacked vertical options as both advanced midfielders, Hernández and Klich were reluctant to provide support in this phase.

In this image, even though there were huge spaces behind the Forest two, but no Leeds players were exploiting those spaces. As a result, White could only play the ball wide, though he found Dallas, this was an ideal situation and the intentions of Forest’s defence. 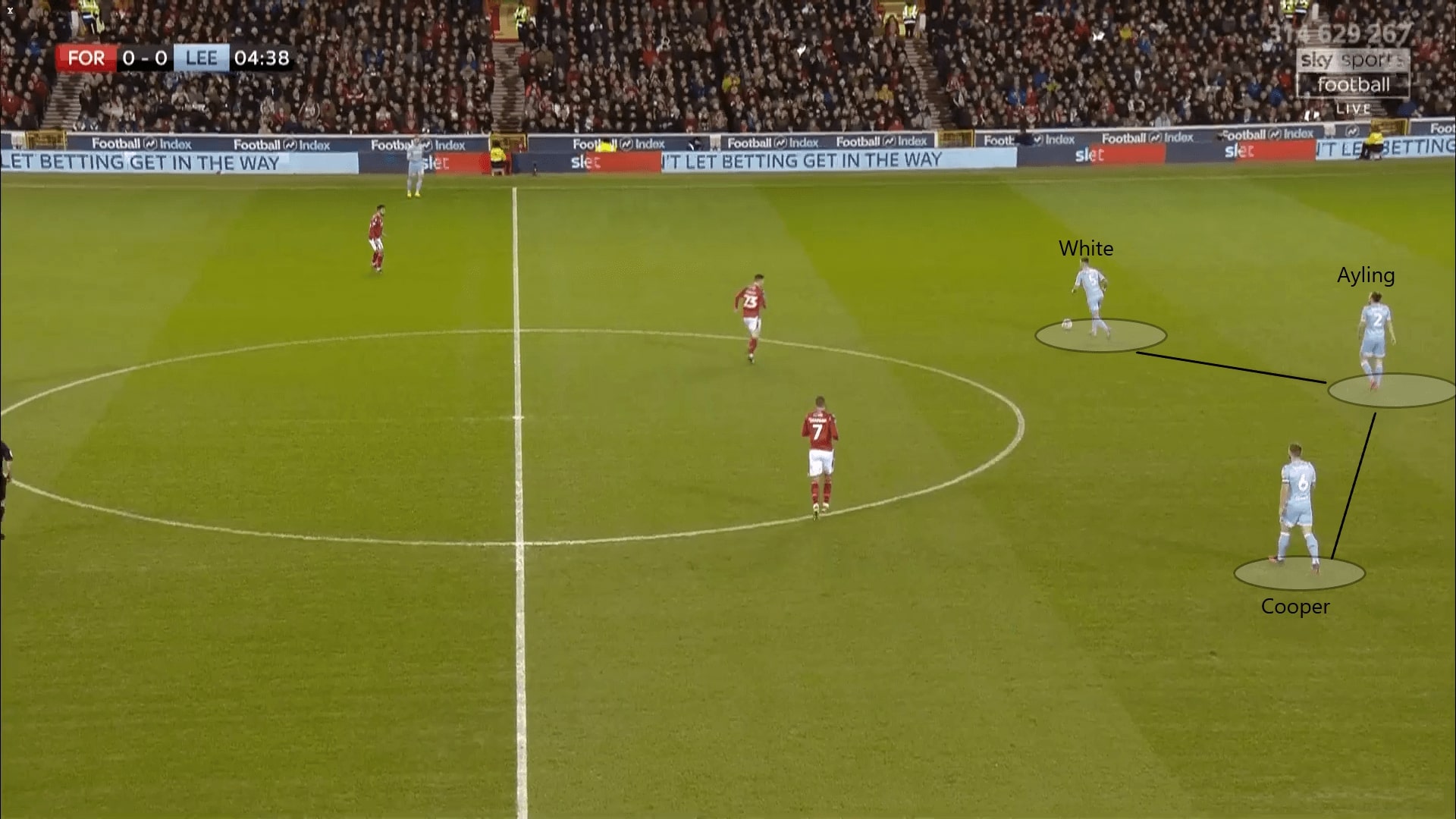 However, Bielsa’s team had a good understanding of the basics of football. They were strong to identify spaces and moving their opponents. Therefore, apart from moving the ball down the flanks, they also found a way out through the centre.

In this example, when Leeds moved the ball wide, drew the majority of Forest players on the right side, it left huge spaces at the centre. The space was further largened by the movements of players.

Dallas, the right-back, continued his run to bring away a red shirt; Hernández dropped deep to fill the spaces behind the right-back, also took Lolley with him. Meanwhile, White already recognized the spaces and sprinted to the highlighted area to receive the pass of Klich.

Then, the task of White was to take Sow on and progress the ball to the final third, which he did. 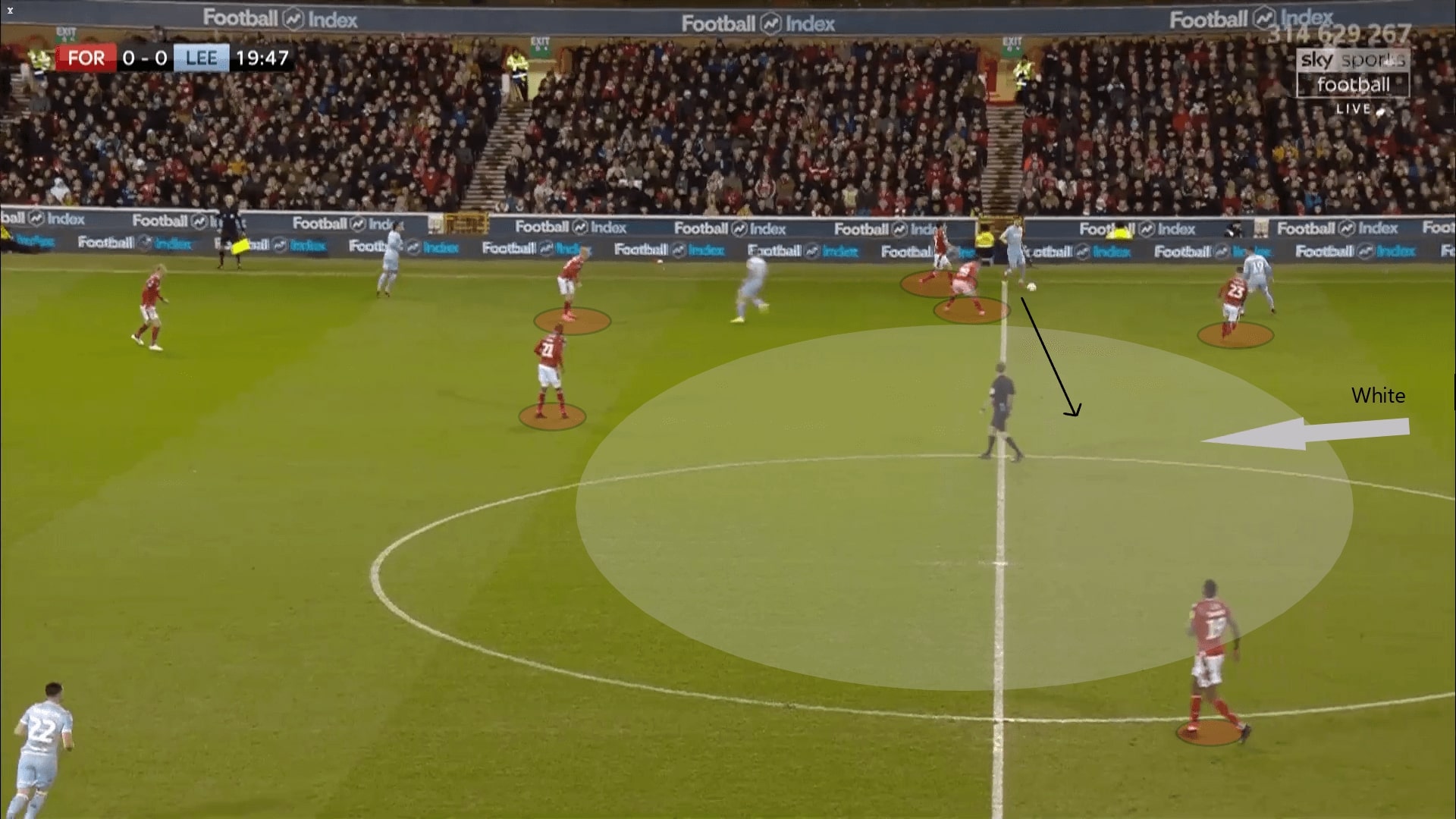 However, White was not fully adaptable the role of a holding midfielder. As a sole pivot, he only had 34 passes, and only completed 26 (76%) of them. The Brighton Loanee was encouraged to made diagonal passes to the left side of the pitch.

The execution was not the best, as his passes were not too comfortable to control, even they reach a teammate. His struggles to involve in the attack somehow made Leeds difficult to penetrate through the centre.

In this match, Leeds were consistent to attack flanks with their switch plays and the creative movements of wide players. Bielsa’s men tried to occupy as much space as possible on the pitch, hence, the full-backs and wingers had to cooperate well.

As mentioned, Leeds mastered moving the opponents. They drew the oppositions to the ball side, then quickly switched the attacking focus to another flank.

In this example, White received the ball from the right, exploited spaces at the centre. Initially, the Forest defensive line was compact to defend the ball side. Jack Harrison’s movement took Ameobi with him.

As a result, they created rooms for Alioski, the left-back, to cross on the left flank. 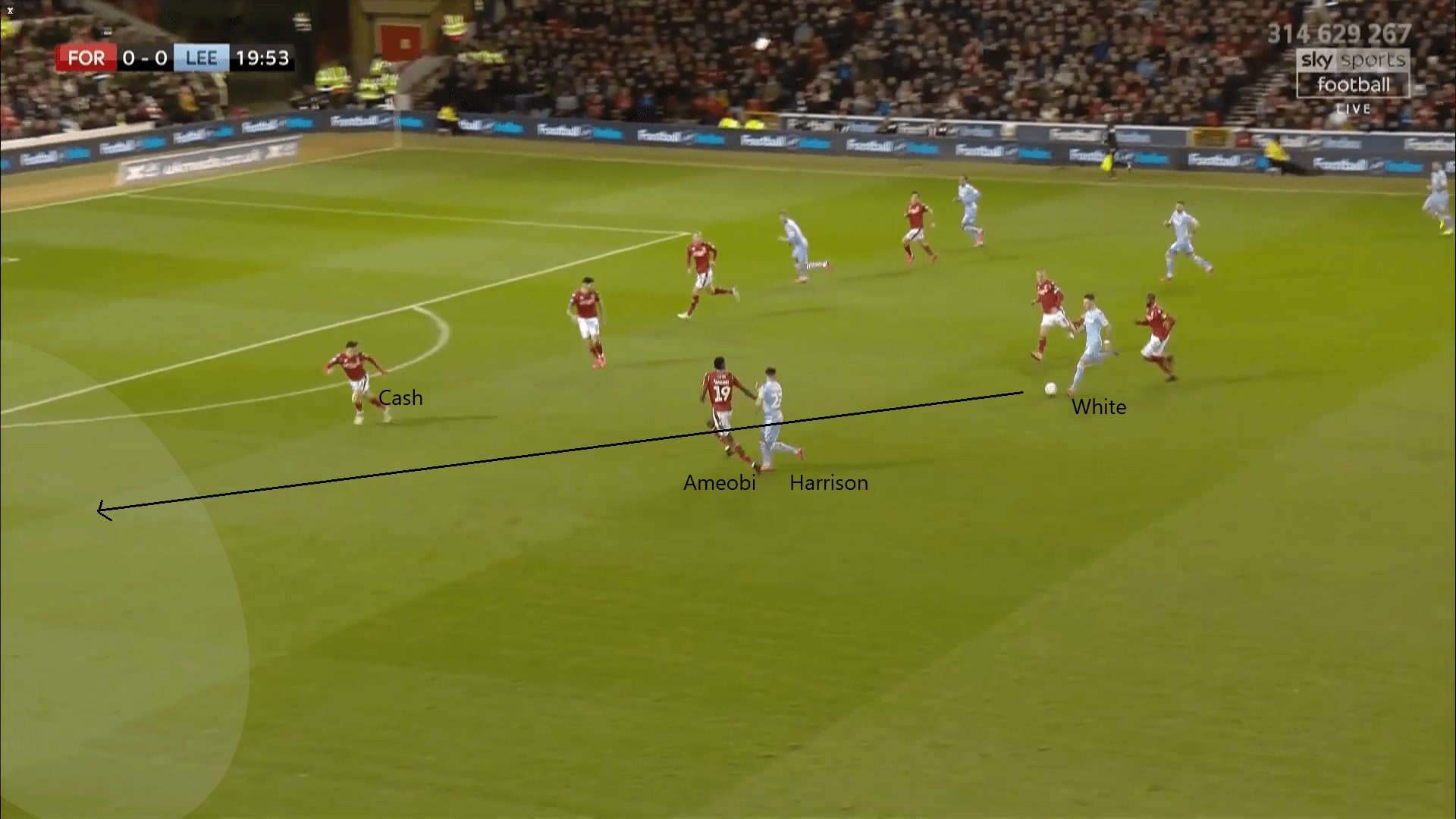 When the wingers carried the ball to the half-spaces, Leeds players tried to create two passing options. The first was the wide man, occupying zone 16 or 18. The second was the player who made his between the defenders, into the box.

Leeds players were also flexible to rotate their positions. The full-backs could make underlapping runs if they had to.

In this situation, Harrison was carrying the ball forward at the half-spaces. He had Hernández on his left; Alioski, the left-back, made an underlapping run to the box.

However, the Manchester City loanee decided to take Sow on, and he failed to capitalise on the numerical advantages created on the flank. 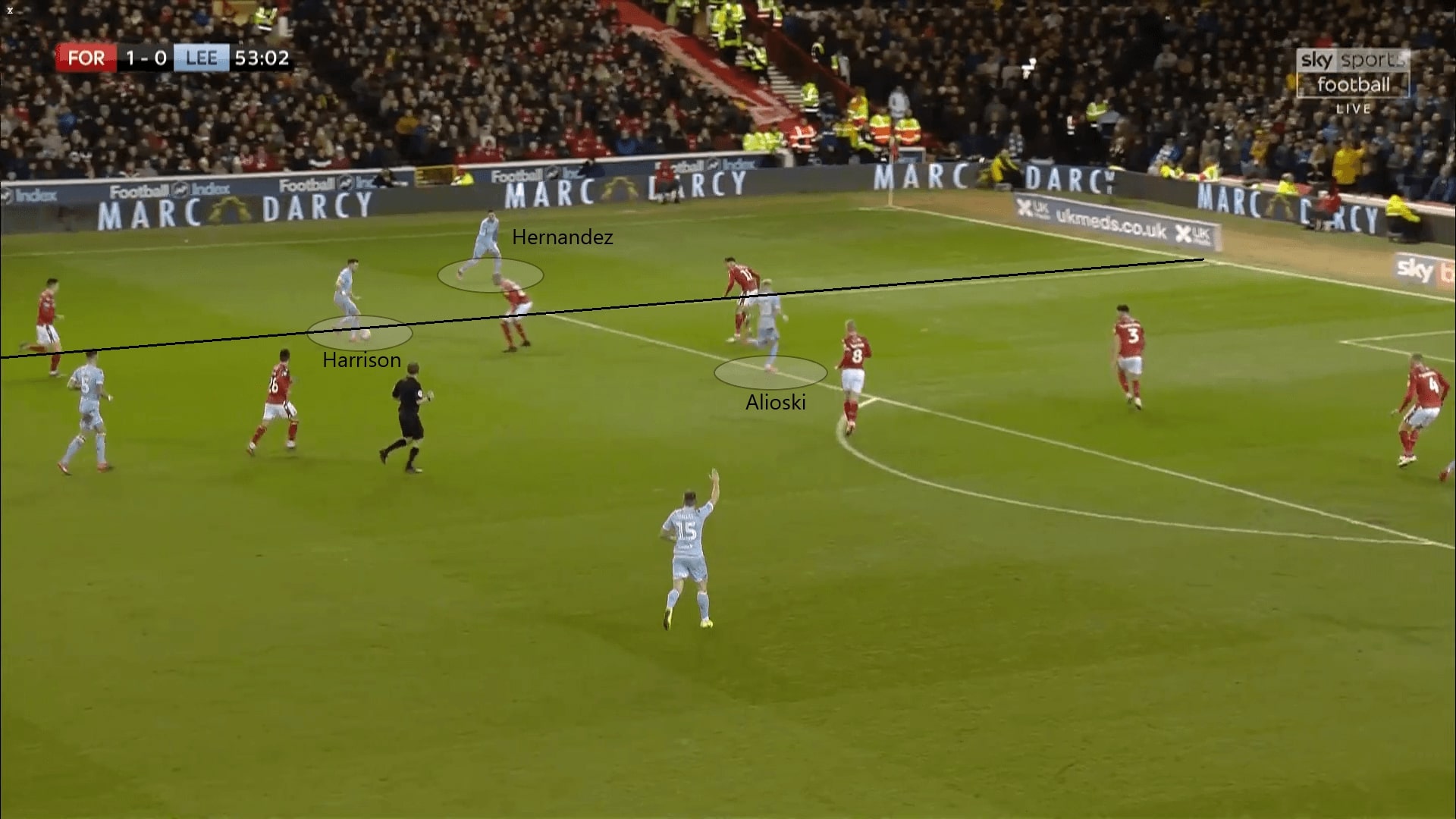 Below is another example to demonstrate Leeds’ attack on the flanks. They were better on the left with the decent performance of Harrison.

In this example, Harrison dribbled to the half-spaces. There were two options for him: Alioski made an overlapping run to exploit the wide areas. Meanwhile, Klich appeared around Sow, it was a three versus two situations.

Harrison was ambitious, as he attempted the central pass to Klich. Though the one-two failed, it showed the flexibility of Leeds’ attack on flanks. 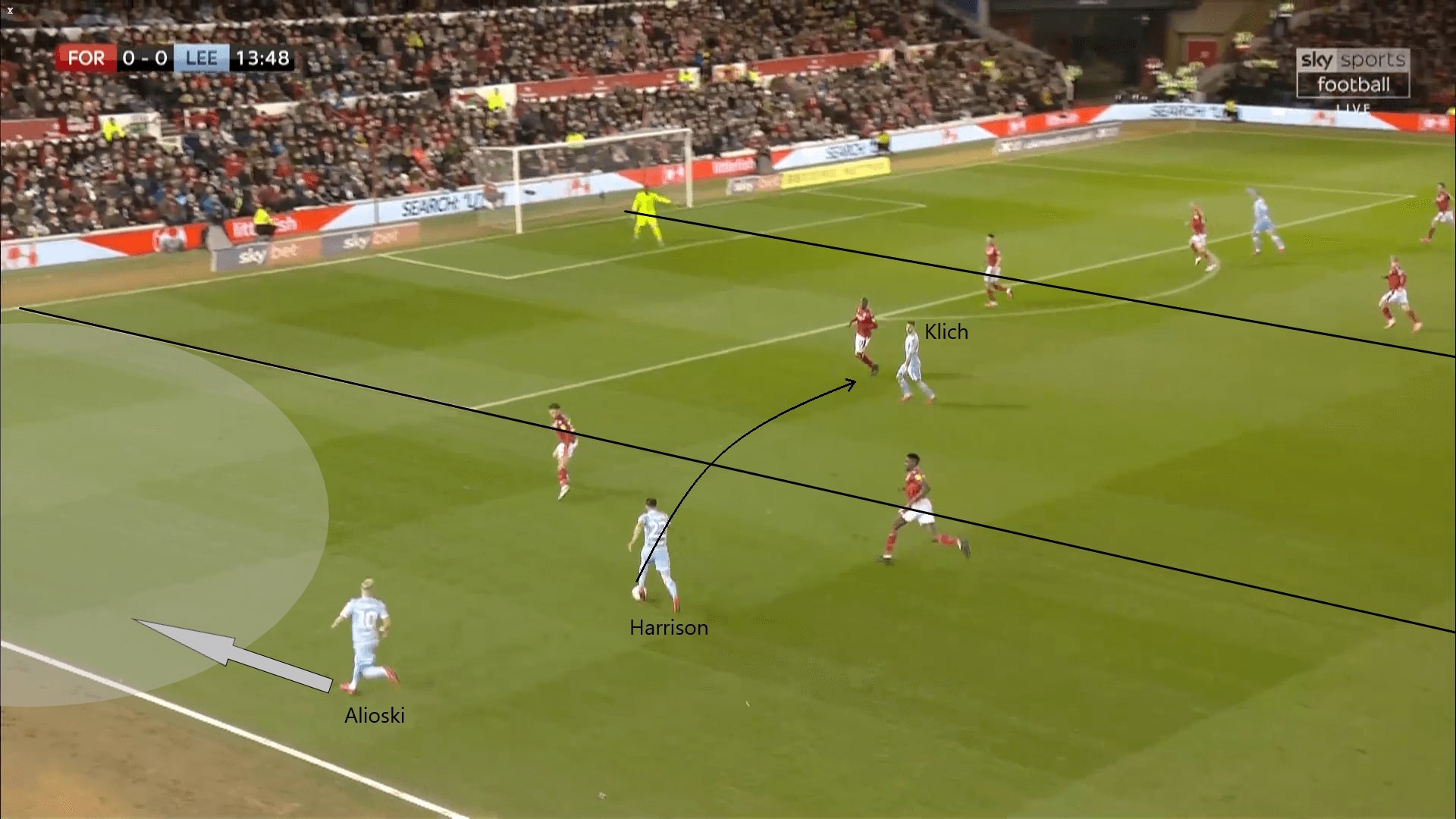 As mentioned, Harrison had a decent performance, even though he was sloppy and gave away the second goal that ended the game.

By statistics, Harrison had two shot assists; one key pass; six successful dribbles out of 10; he also involved in 21 offensive duels. He gradually became the main man in Leeds’ attack.

For his passes, although he was a right-footed on the left, he was ambitious to pass centrally. The former New York City man had 55 passes, and 40 of them reached his teammates. Below is the passing graph of Harrison in the game. We can observe that quite many of his passes were going to the centre of the pitch.

With the presence of Harrison, Leeds were strong on the left flank.

For every possession-based team, they opened their shape to play out from the back, But, they were vulnerable when they lose the ball, as it required more time for the players to return to a compact shape. Therefore, counter-press was important for Leeds.

In this match, Leeds maintained a high pressing intensity, with a PPDA of 3.3 throughout the game. For most cases, they counter-press immediately as soon as they lost the ball.

This was a reason that they kept a high percentage of possession in this game. Below was an example. Cooper’s long ball was not reaching his teammate, and, resulting in a possession turnover.

When the ball loss, Patrick Bamford immediately reacted. He turned his head to request the follow up of his teammates while moving to press the centre-back. Meanwhile, Harrison cooperated the counter-press by closing Cash.

It showed the players’ understanding of Bielsa’s tactics, as they both picked the right player to mark. Bamford anticipated the return pass from Cash to Tobias Figueiredo.

Under the instant pressure from Leeds, the right centre-back played the ball out uncomfortably, resulted to a throw-in, Leeds successfully delayed the attack and regrouped the defence. 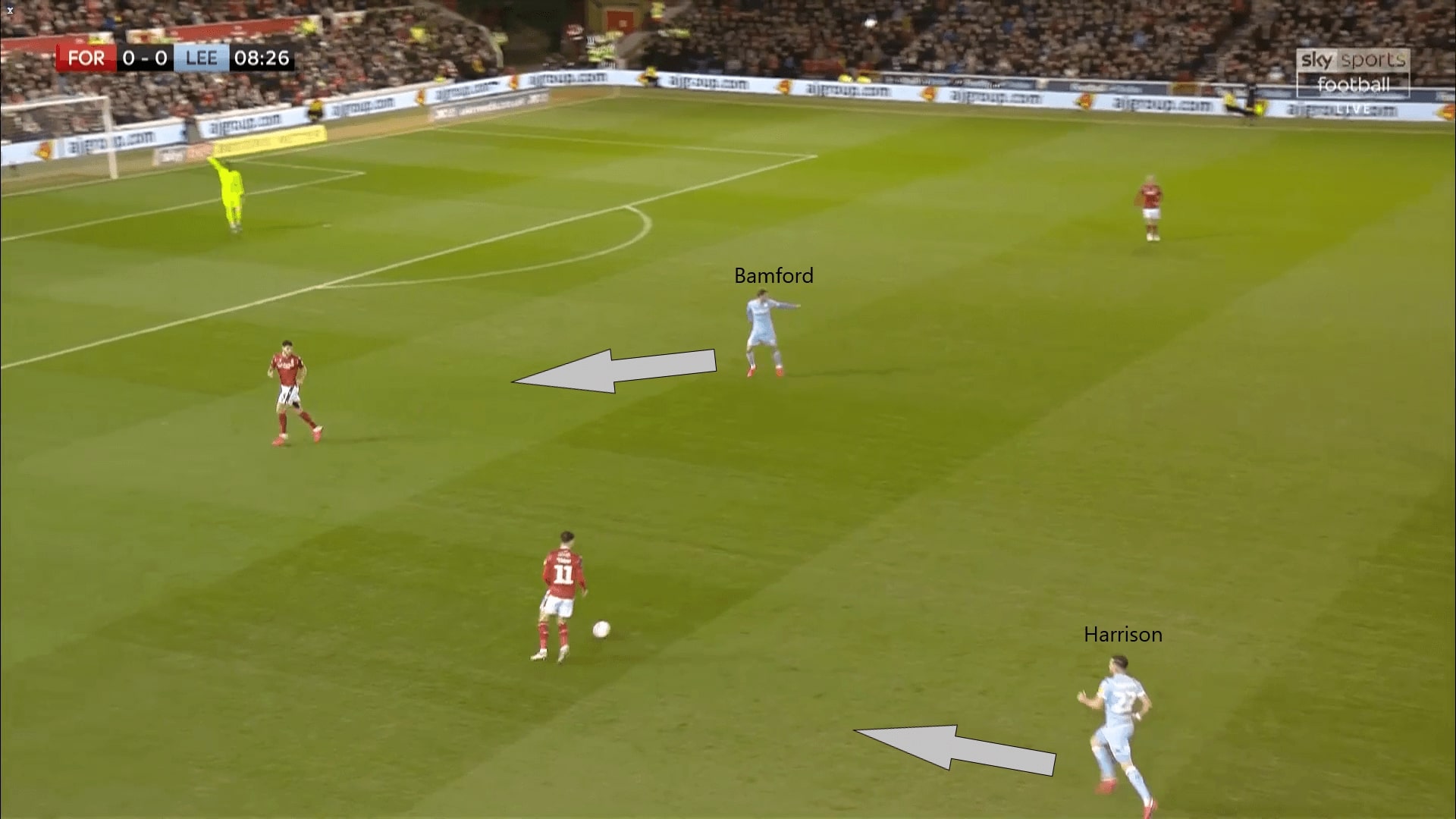 Forest in the transitions

For Forest, they were well prepared to hit Leeds in the transitions. At first, they set Ameobi as the wide target man, but the 194 cm former Newcastle player did not dominance in the physical mismatch against Alioski (171 cm).

As the game went on, Forest found their rhythm to attack in the transitions. They utilized the spaces behind full-backs, as Leeds pushed both of them high and wide to support the front players.

It seemed only playing White as a sole pivot was not enough to stop the transitions. For the centre-backs, both Ayling and Cooper somehow struggled in one v one situations. These allowed Forest to create chances in the counter-attacks.

In this example, Alioski joint the attack in the final third. And, Harrison’s dribble was intercepted, which quickly turned into a Forest counter-attack. Therefore, we saw the Leeds left-winger defending in the following image.

When facing Lolley alone, Cooper panic and failed to stop him. As a result, Ayling also moved towards the Forest No.23, and left Grabban behind him. It turned into a huge chance of Forest with an xG of 0.25. 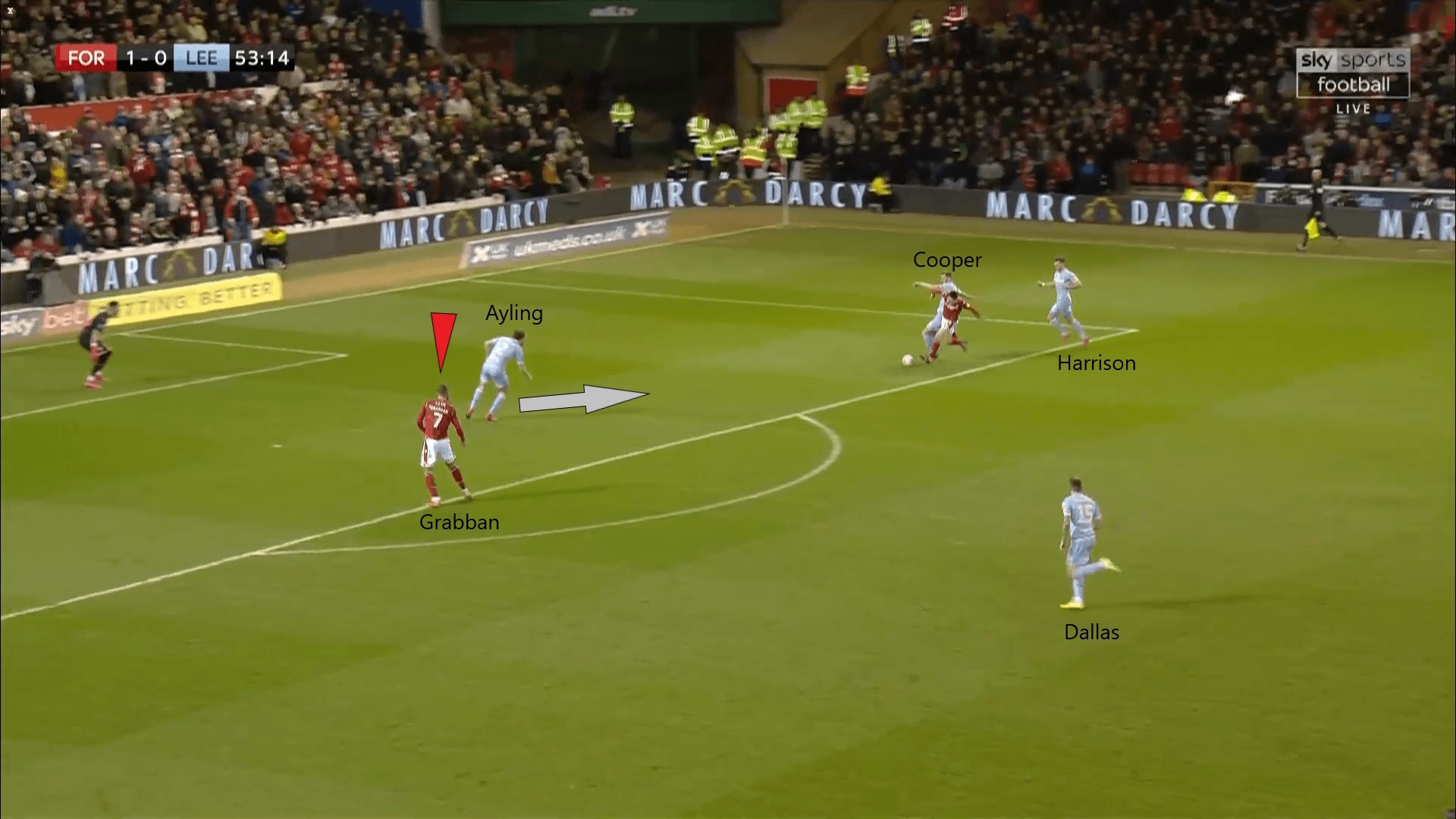 Another loss for Leeds in the new calendar year. It was not a good sign for Bielsa’s team, as they already dropped to the second of the table. Tactically, they were fine; they managed to reach the final third. However, they were reluctant to shoot, and the quality of individuals in key moments should be questioned. Before the goal, Bamford had a good chance to head a cross with an xG of 0.38, and he did not even direct the ball towards the goal. Then, in the second half, Cooper also had a 0.24 xG chance in the corner. Once again, the effort was saved by Brice Samba. They really need to win the coming matches as many as possible in the future.

Forest had a nice game, they defended well with a low block. Sow did tremendous work to defend, he had 10 interceptions; four clearances; 10 recoveries and won 11 of his 18 defensive duels. Their defenders threw their body to block the shots, as four of nine Leeds’ shots were blocked. Eventually, their hard work were rewarded by three points!