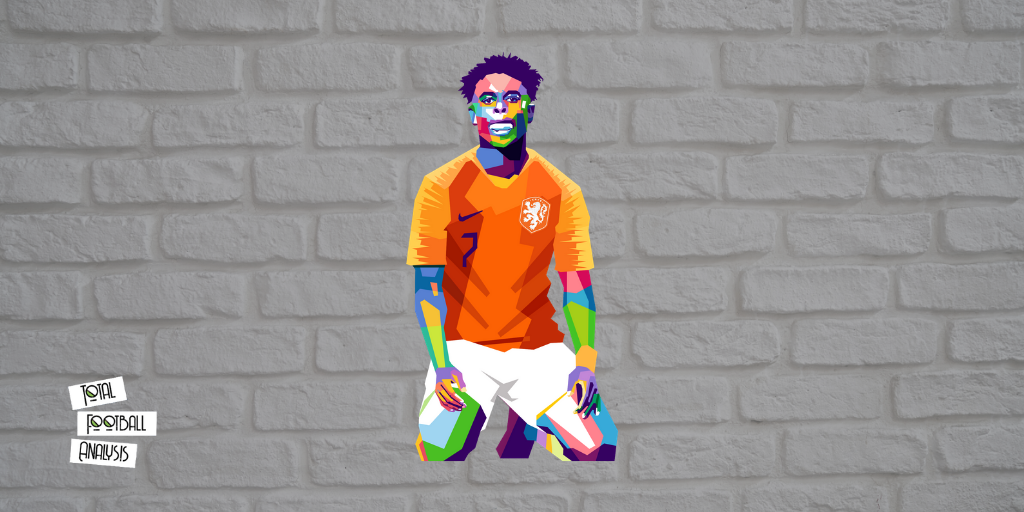 At just 17 years of age Sontje Hansen is one of the most exciting young talents in European football. Born in the Netherlands, the attacker plays his trade with Ajax’s U19s. He made a splash in the U17 World Cup, winning the competition’s Golden Boot with six goals. It is an award won by players such as Cesc Fabregas, Carlos Vela, Victor Osimhem and Rhian Brewster. This tactical analysis will review the aspects of Hansen’s game that make him such a danger to his opponents’ defenders.

Because of his age, Hansen hasn’t played a boatload of filmed football. He only has 1,750 minutes of competitive youth football under his belt at the time of writing. With that being said, however, he has already notched himself 11 goals and registered seven assists. Seven of those goals and three of those assists came this season. In the start to this 2019/2020 season, he has an xG of 0.39 goals per 90 minutes, which he exceeds by scoring 0.68 goals per 90 on average. He has a 78.6% passing accuracy, averaging 35.44 attempted passes every 90 minutes. But these statistics only paint a small picture of what Hansen has to offer. The rest of this analysis and scout report will look at the in-game moments that make him such a special talent.

The first aspect of Hansen’s game that we will look at is his incredible dribbling ability. On the ball, the winger is comfortable running at defenders with pace. His footwork is silky, allowing him to weave in and out of defenders with ease. In fact, this season Hansen averages 7.09 dribbles every 90 minutes. He only has a 47.9% success rate with these attempts, however, but still poses a real threat to his opposition.

His dribbling utilises a combination of quick accelerations and changes of direction into empty space. We can see his impressive dribbling ability against Paraguay when Hansen assists his teammate after beating a player on the dribble. As he progresses the ball up the field, Hansen is pressed by one of the defenders. 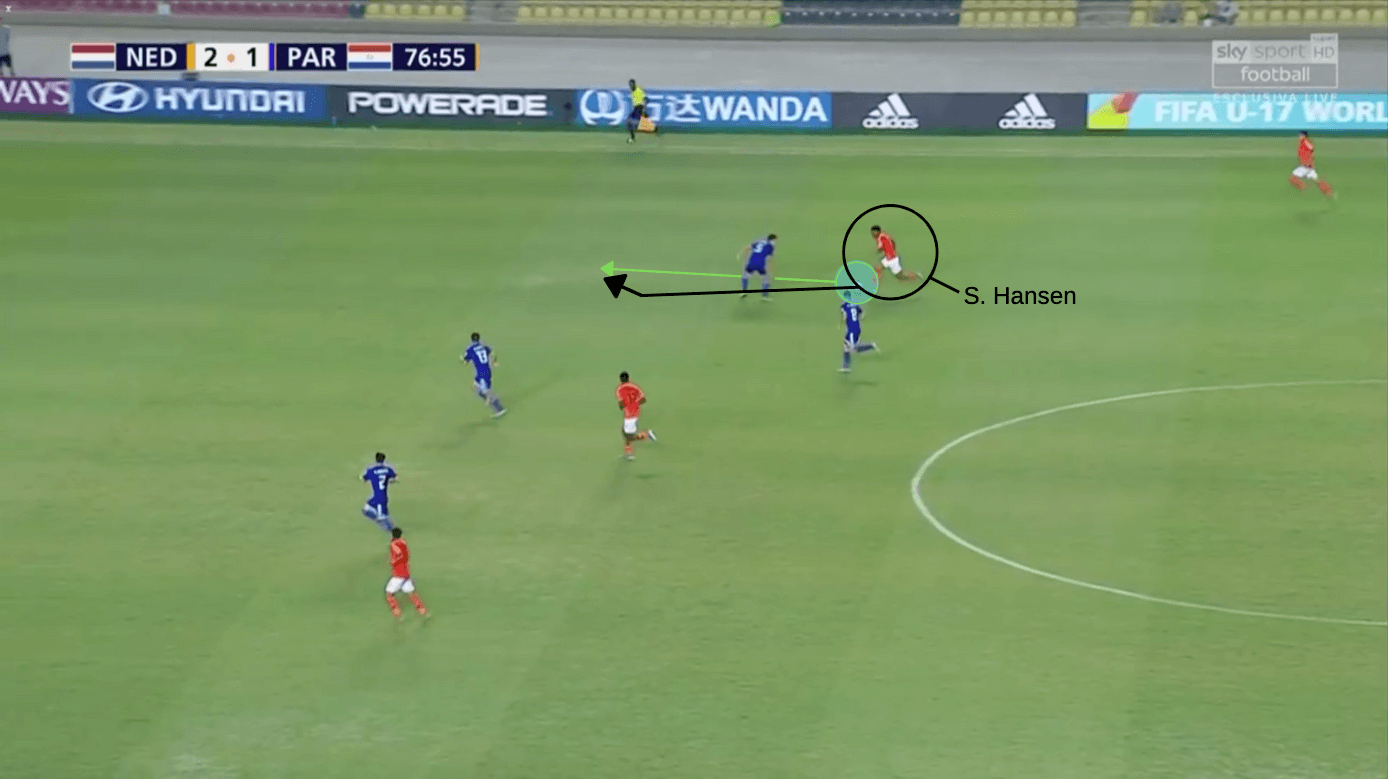 Hansen recognises the space behind the defender pressing him. In the image above, we can see him simply knock the ball past the defender, into the space, and accelerate past the player on the opposite side. The defender finds himself flat-footed and Hansen beats him to create a 3v2. Hansen then passes the ball across to his teammate who finds the back of the net, which we can see in the image below. He shows his ability to beat players with a quick burst of pace against the United States of America, as well. As he receives the ball at the top of the box, he is quickly closed down by his defender. As the defender makes his approach, Hansen flicks the ball past him and accelerates into the box, as we can see below. 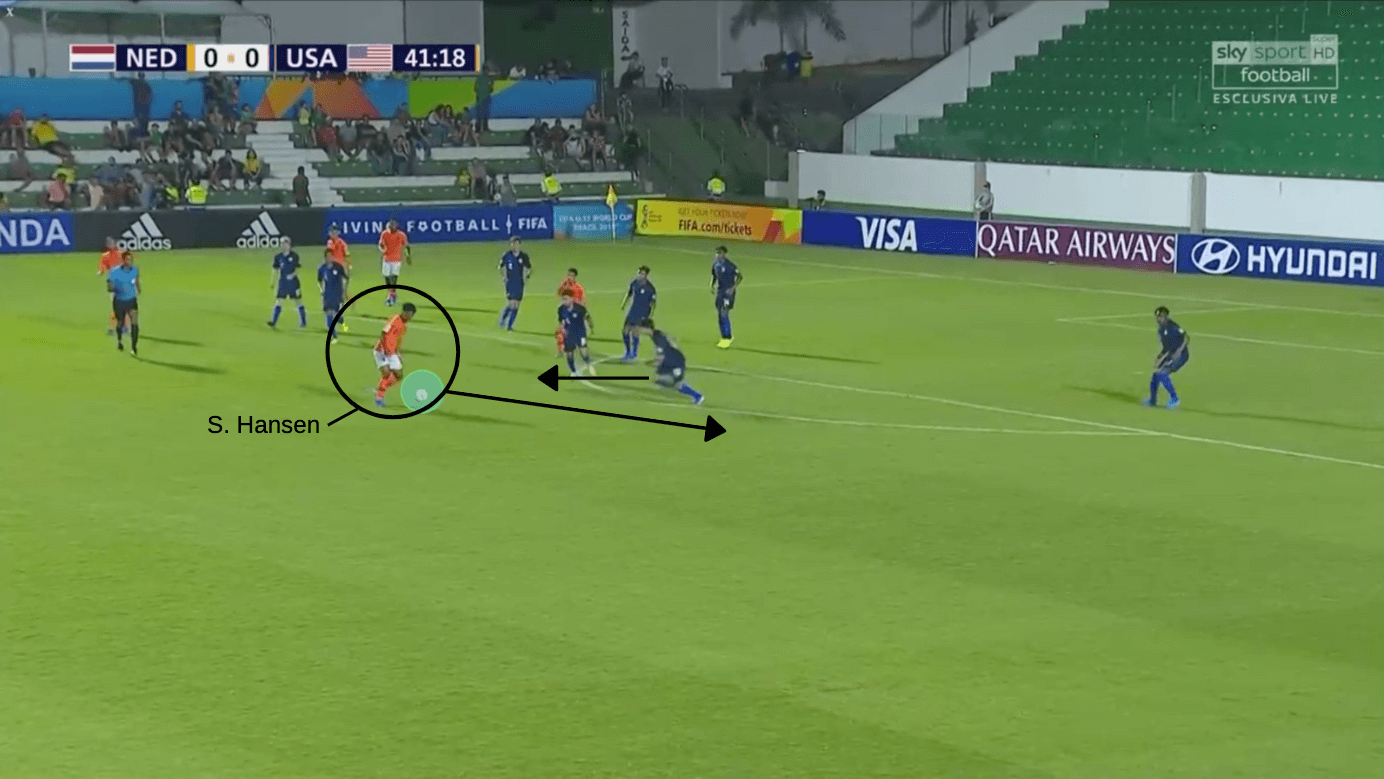 He now has the opportunity to play his teammate into space out wide, but instead cuts back inside where he beats another player with some slick footwork. We can see the two options he has in the first image below. 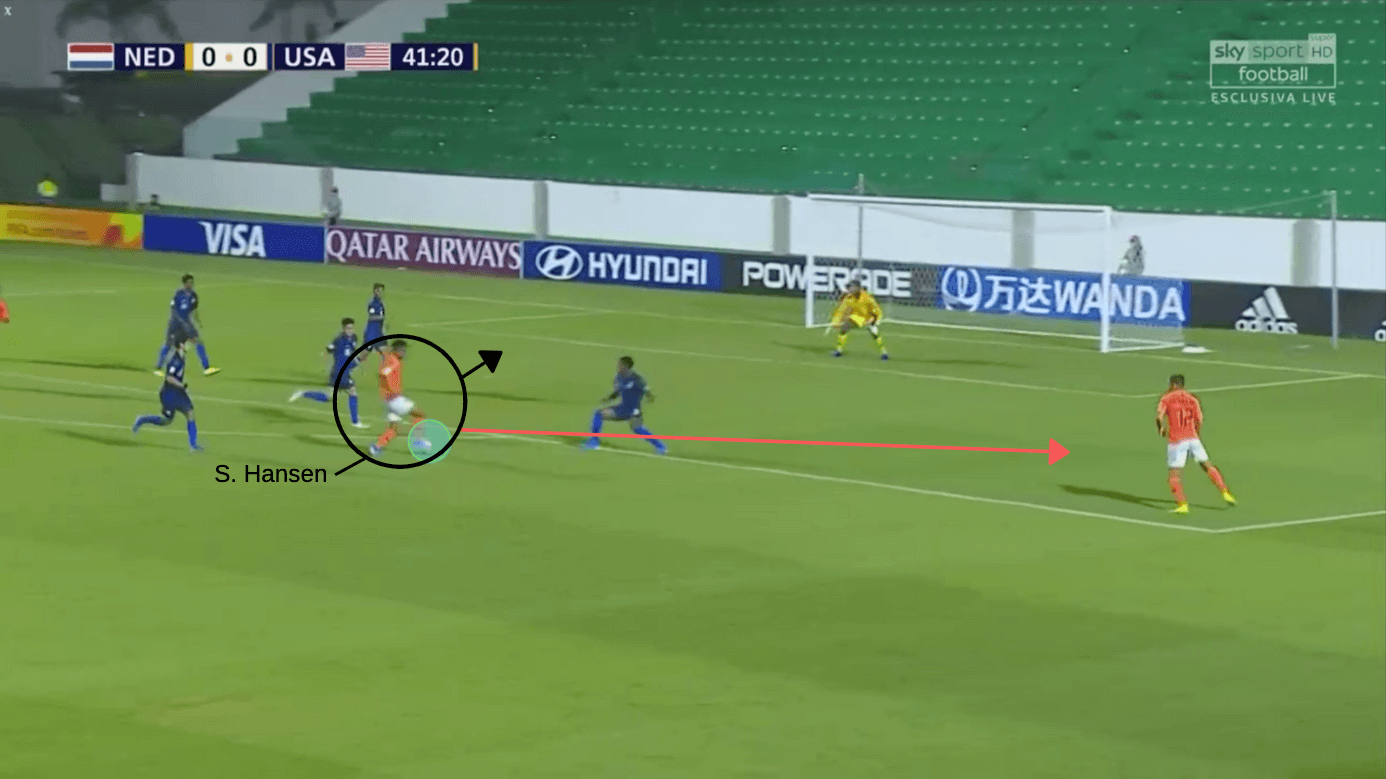 After beating the second player Hansen finishes the ball past the goalkeeper to open the scoring. 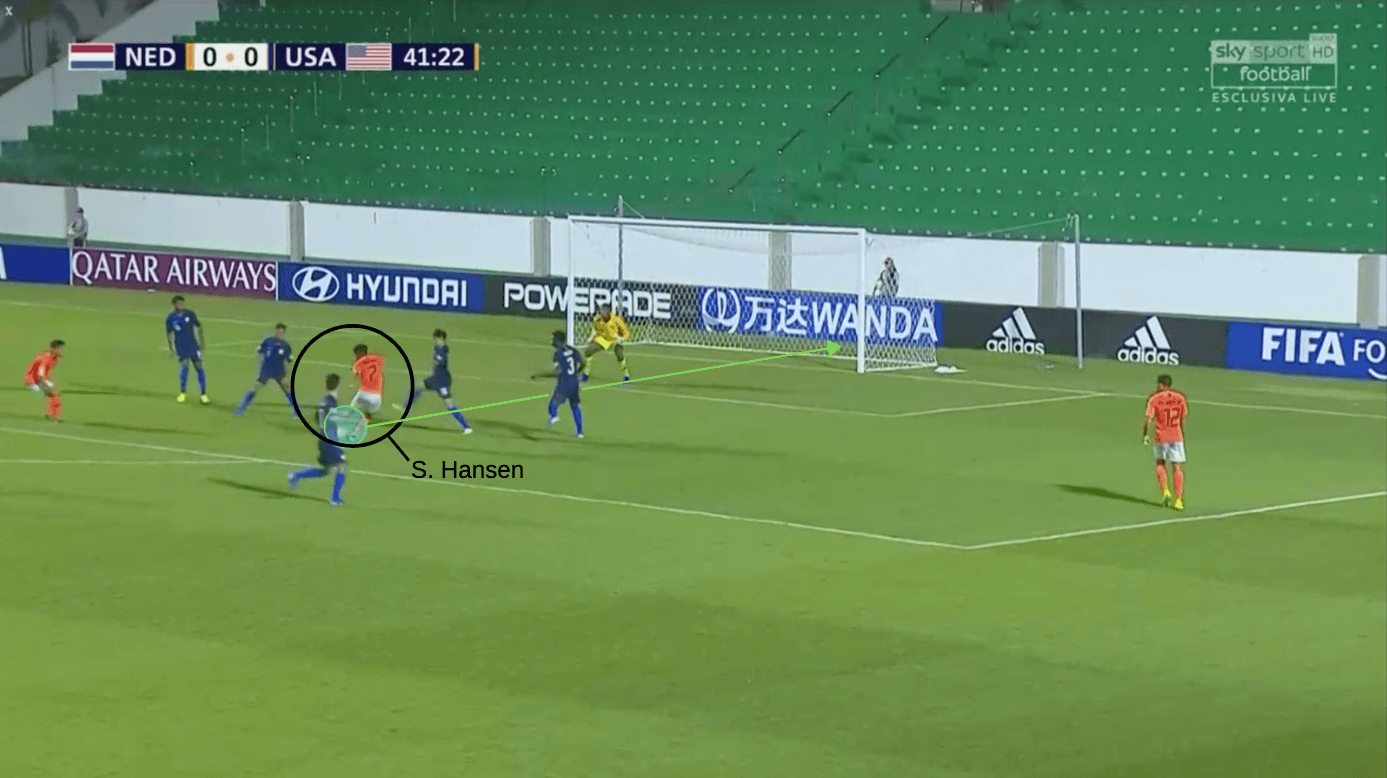 This passage of play shows Hansen’s ability to utilise various dribbling techniques; a quick burst into empty space with pace and an ability to weave past defenders with close control.

Sometimes his dribbling is effective without needing to beat a defender. In the following clip, from a game against Mexico, Hansen can be seen dribbling into empty space without a defender closing him down. He picks up the ball on the counter-attack and begins his dribble. But instead of dribbling into the empty space out wide, he dribbles centrally into pressure. This dribble encourages pressure from multiple opponents, as we can see below. 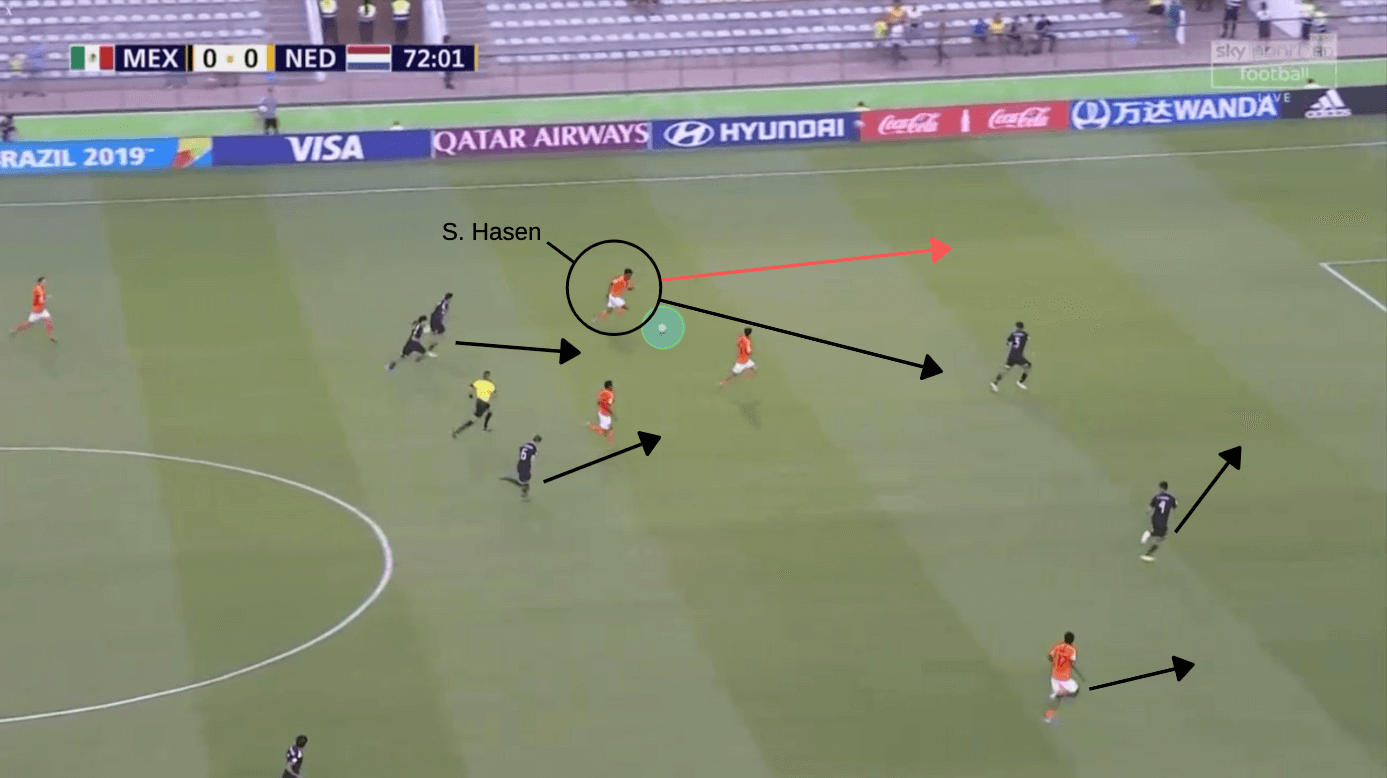 When these defenders gravitate towards him, it opens space up out wide for his teammate. He then has the option of passing the ball into the box for a great goal scoring opportunity. The player attempts a chip but the ball sails over the crossbar. 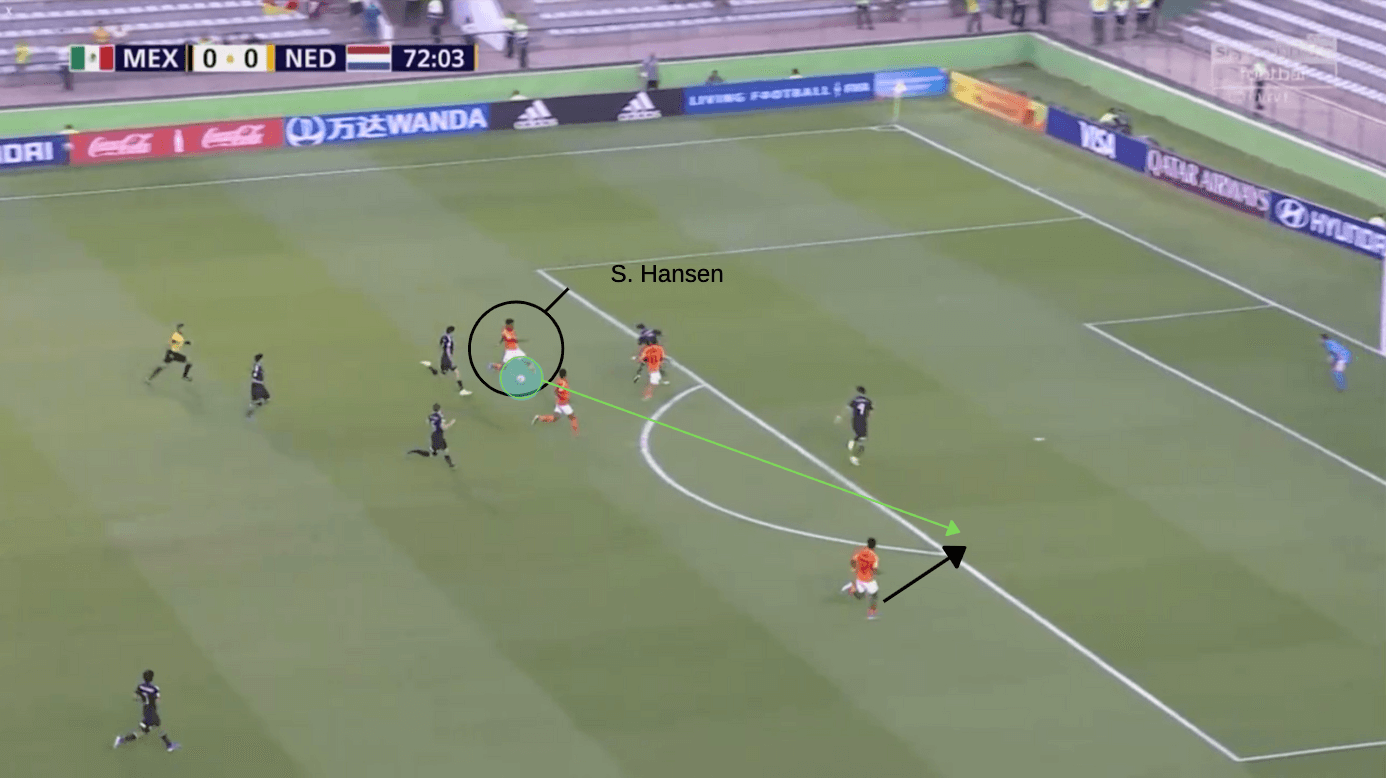 While he has the ability to progress the ball with forward passes, he is much more proficient with his dribbling. His style is very much suited to quick counter-attacking football, however, he has the ability to drive into crowded areas and beat multiple opponents who might be sitting in a low block. Most importantly, Hansen appears to have impressive spatial awareness that allows him to move into, and create, empty spaces with his runs.

The xG and goal-scoring statistics from above, while impressive, are just numbers. It is not until you view some of his goals that you recognise how deadly of a finisher Hansen is. Regardless of where the ball is being struck from, Hansen is not afraid of taking the shot. He is comfortable hitting the ball with both feet and in many instances and tucks the ball into a corner with a well placed first-time shot.

His ability to hit the ball with both feet makes it even more difficult to defend this terrific dribbler. In his goal against the United States of America, shown above, Hansen places the ball into the bottom corner with his left-foot after being shown onto his weaker side by the defender.

A few of his highlights suggest that Hansen can still improve on the consistency of his strikes. Despite being clinical in many of his goal-scoring scenarios, he has hit the ball too close to the goalkeeper on other a few occasions as well. But as mentioned above, he outscores his xG by 0.29 goals per 90 minutes.

Perhaps the aspect of Hansen’s game that makes him so exciting is his creativity and unpredictability. On multiple occasions, Hansen finds creative ways to progress the ball or beat the defender. It isn’t uncommon for professional footballers to utilise a stepover or two to wrong-foot their opponent, of course. But at 17 years of age, Hansen makes the use of these skill moves look effortless.

We can see him utilise impressive footwork in some of the instances above. As well as this, when he scored against Paraguay, Hansen scooped the ball over the goalkeeper instead of passing the ball into the net. He made the chip look easy. Footage from Hansen’s games in the Ajax youth system shows him wrong-footing multiple opponents at once to create goal-scoring opportunities.

This creativity showcases the player’s ability to creatively, and quickly, problem-solve when beating defenders. A goal against LOSC Lille stands out with the player using a backheeled chop to sent the defender and goalkeeper the wrong way before placing the ball in the top corner with his weak foot.

Hansen also uses his flair to make unexpected passes. In a game against Mexico, when dribbling into the box, Hansen loses the ball when attempting to get past a defender. The ball bobbles behind him and he quickly turns to recover possession. We can see him recovering to the ball in the image below. 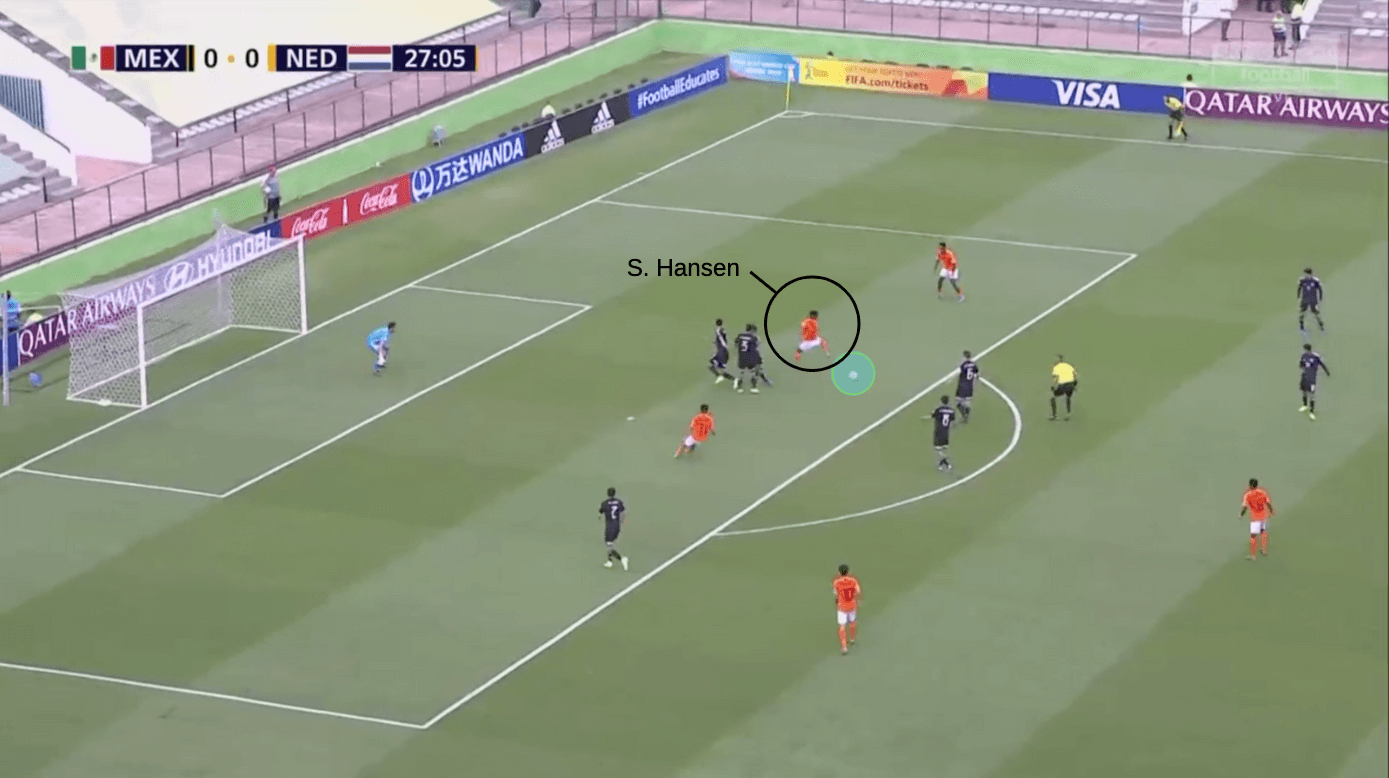 Instead of dribbling into the space he is facing, he backheels the ball into the path of a teammate. The ingenuity of the pass results in the ball finding its way into the back of the net, however, the goal is disallowed because of interference to the goalkeeper. 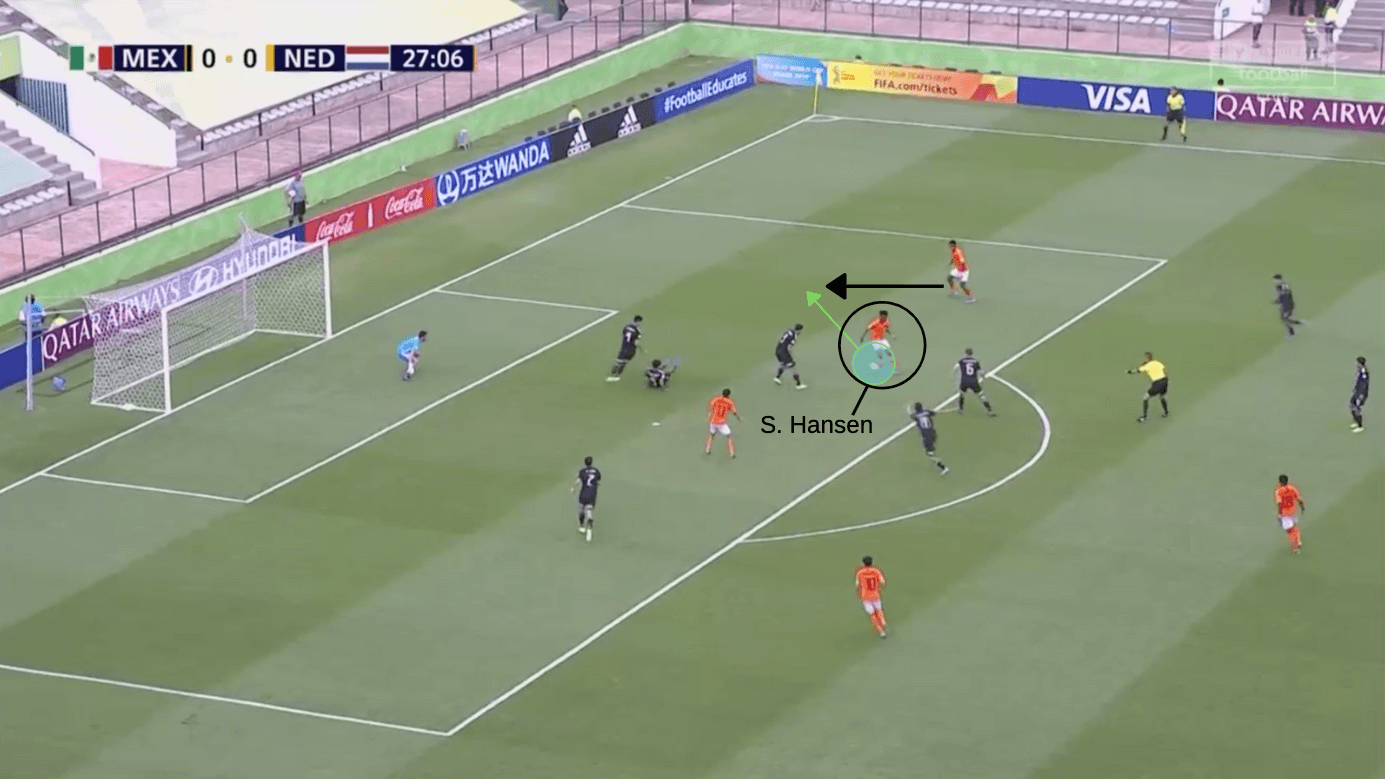 Hansen uses a similar technique against Nigeria. As the ball is headed towards him, Hansen uses his creativity to thread a through ball to his teammate with a mid-air backheel. As he plays the pass, he simultaneously spins into the centre of the field to take up an effective position centrally. The utilisation of the back heel allows the team to transition up the field quicker, making it more difficult to defend. Had Hansen taken a touch before laying the ball off, it would have given the defenders extra time to get back. Plus, who doesn’t like a bit of showboating every now and then? 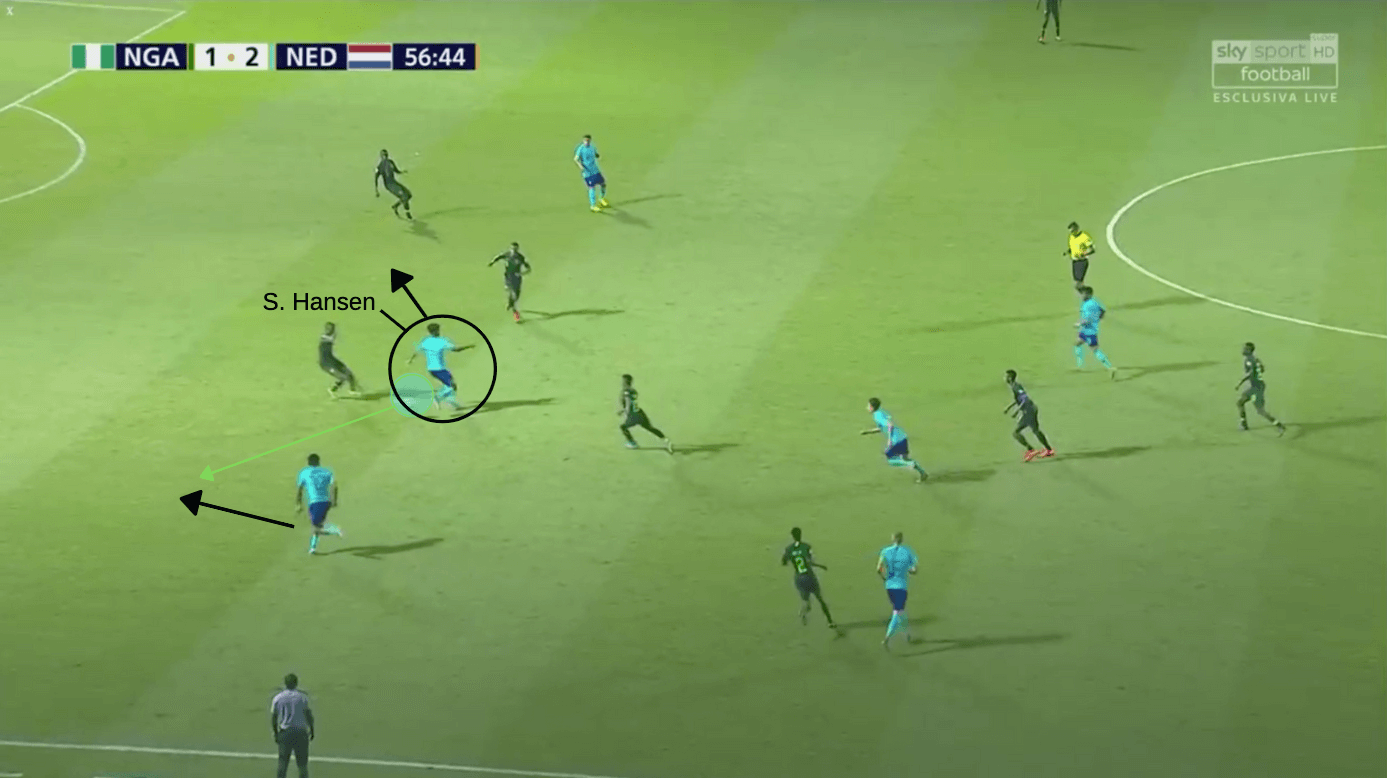 This aspect of his game is one of the most exciting aspects of Hansen’s game from a scouting perspective. While he shows his strengths in many basic aspects of the game, his creativity and flair showcase an aspect of football that is very difficult to coach. At just 17 years of age, the player already has a great ability to read the game and creatively problem solve.

It is unknown what Hansen’s future holds. But he is a brilliant footballer who is a product of one of Europe’s top academies. His age suggests that he still has a few years to go before breaking into the Ajax first-team, however, his performances to date suggest that he is already years ahead of his peers.

Be sure to watch Hansen’s progress in 2020. He is one of the best up-and-coming offensive players in the game right now and should definitely be monitored by clubs from across the world whose tactics revolve around playing quick counter-attacking football. His creativity and flair set him apart from other players in his position. His confidence to play so creatively and freely at such a young age suggests that, over time, he will expand the number of tricks he has in his locker. By the time he hits his early 20s, he could be ready to make a move to one of the top clubs in Europe.