In the last couple of years, Borussia Dortmund had to fight with several set-backs as other clubs became attentive of their talents. İlkay Gündoğan (29, Manchester City), Henrikh Mkhitaryan (31, AS Roma), Pierre-Emerick Aubameyang (31, Arsenal London), Ousmane Dembélé (23, FC Barcelona) and Robert Lewandowski (32, FC Bayern) are only a few world-class players, Dortmund had produced. Now, they are gone. Nevertheless, Dortmund is still a very good team in Bundesliga and in Europe. Why?

Furthermore, Dortmund is doing a quite good job in developing young players from their own youth academy into promising talents. Mario Götze (28) and Marco Reus (31) both played for Borussia Dortmund´s academy before making a world-class career in football. At Dortmund, they want to focus on players from their own academy again. It is the “Dortmund philosophy” to build on homegrown talents.

In this data analysis, we will take a closer look at the next generation, their players´ data, and statistics. Who has the potential to be the next star in Dortmund´s first team and who has the ability to become a world-class player? We will provide you with data and statistics to evaluate Dortmund´s current youth academy players. 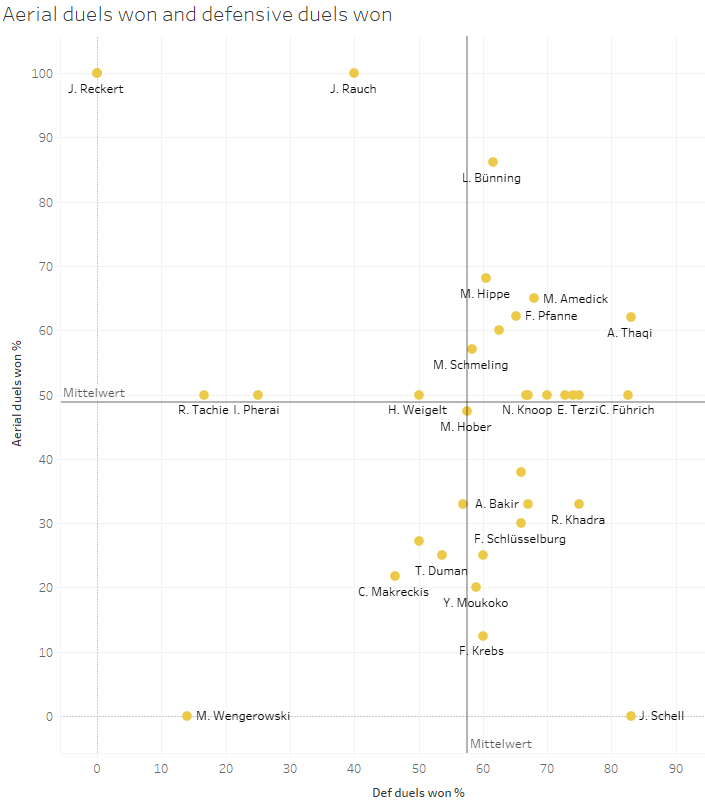 Looking at the graphic below, we can see that some players stand out and appear on the right upper quadrant. Lars Bünning made himself a name by winning 85% of his aerial duels as well as 62% of his defensive duels. Therefore, he will play for SV Meppen in 3. Liga next season. But, still, two players with outstanding stats in these categories will play for Dortmund next season. Maik Amedick (18) provides a successful rate of 65% regarding aerial duels and 68% regarding his defensive duels. These are quite good stats for a central midfielder. Centre-back Albin Thaqi (18) wins 82% of all his defensive duels.

In this section, we will take a look at the best passers in the team; the players who are able to circulate the ball and do it well.

Centre-back Henri Weigelt (22) provides an outstanding pass rate of 96% successful passes. Lloyd-Addo Kuffour (18), Tobias Raschl (20), Niclas Knoop (19) and Albin Thaqi (18) provide more than 90% successful passes by playing a lot more of them per 90 minutes. Ramzi Ferjani (19) provides the most passes per 90 minutes (almost 300) and still has a very good rate of 89%. 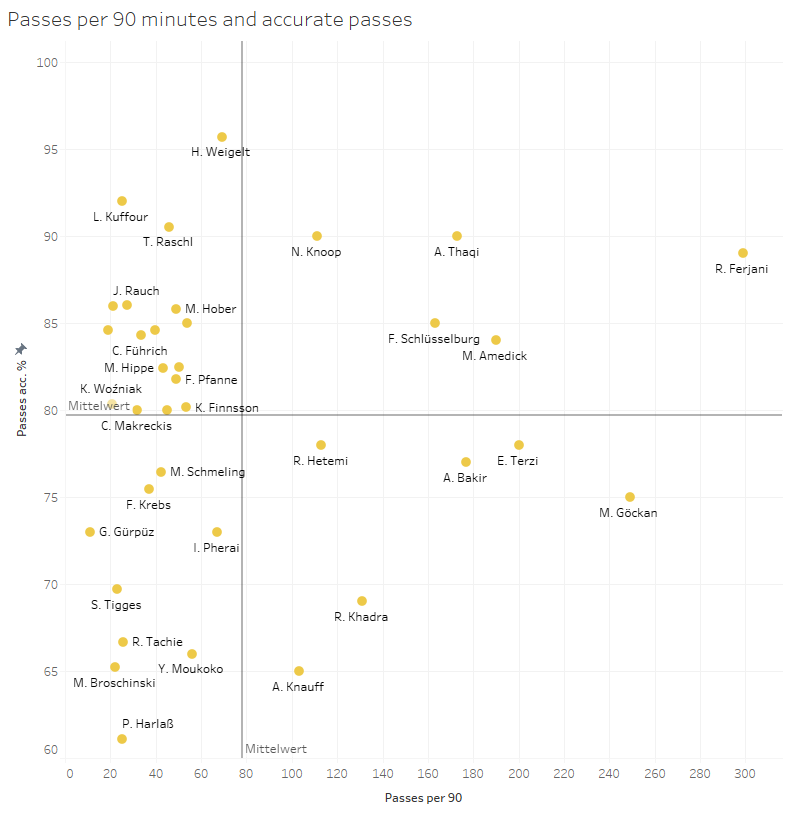 Moving to more offensive statistics, we will now take a look at the player’s dribbling abilities and creativity. For this next scatter plot we created the metrics “Dribbles per 90” and “Successful dribbles (in %)” An analysis of these metrics will give us a good view of the player’s technical development.

Two players, who already train with the first-team squad, Ansgar Knauff (18) and Yousouffa Moukoko (15), provide lots of dribbles per 90 (Knauff: 22, Moukoko: 38), but need to improve the quality to increase their output. 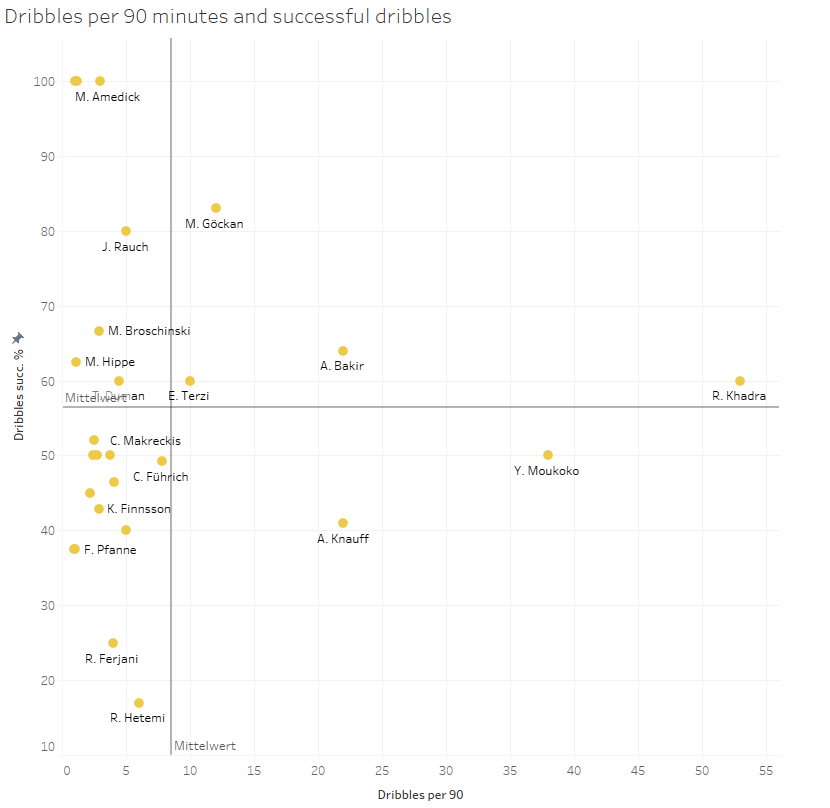 In this final section, it is time to take a look at the goal contribution each player has made for the team, in order to do so, we created the metrics “Goals” by adding all goals in this year, and “xG” to find out how many goals the players were expected to score this year.

The 15-year-old wonder kid Yousouffa Moukoko provided eight goals in 461 playing minutes this year. This is an outstanding rate. Furthermore, he overperformed his xG of 7.3. Alaa Bakir (19) is cold-blooded as he scores as many goals (two) as he is expected to. Ansgar Knauff (18) has an xG of 0.3 but even scored one goal. 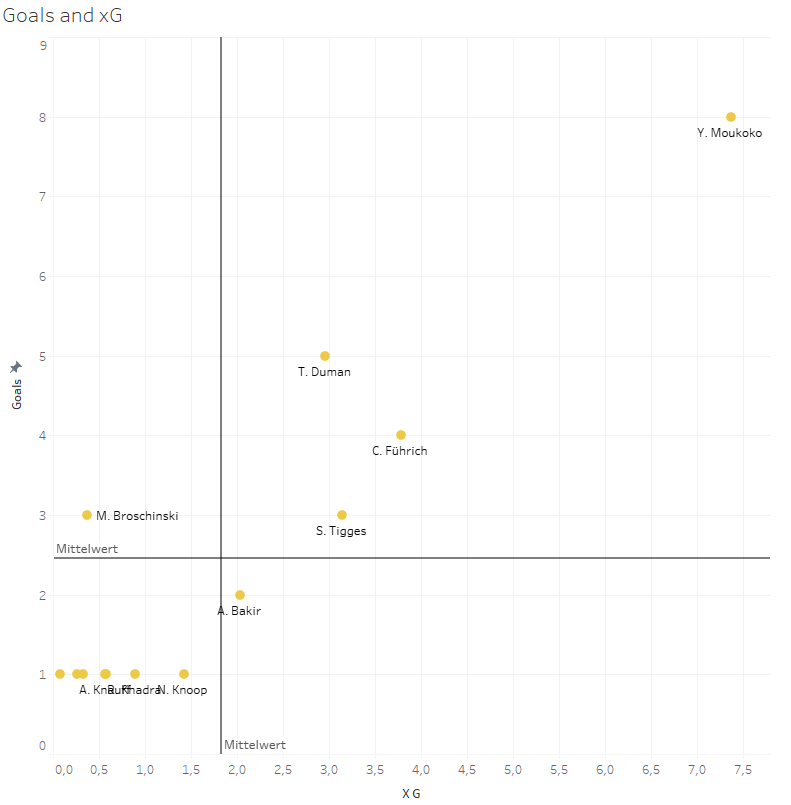 As already mentioned, we evaluated all statistics to make a final shortlist with the three most promising talents out of our data pool. All three have the ability to make it into the first-team squad in the near future.

Ansgar Knauff has played as right-wing for Borussia Dortmund since 2016. In the U19 he is one of the absolute top performers (26 matches, seven goals, seven assists) together with Yousouffa Moukoko and Alaa Bakir. He may still play Under 19-Bundesliga for another year.

Maik Amedick plays for Borussia Dortmund for several years and already was captain for his teams. Born in 2002, he will play for the U19 another year before he might get a chance in the first-team squad next year. In 17 Under 19-Bundesliga matches for Borussia Dortmund, he assisted four goals playing as a central defensive midfielder.

In this data analysis, we were able to identify the talents in Borussia Dortmund´s academy who have the best statistical profile and therefore the best in terms of raw output. The data shows, however, that these three players had a significant contribution to Dortmund´s youth teams and show signs of being ready to take the next step. Although data analysis doesn’t give us a complete view of the player’s quality and needs to be complemented with gameplay analysis, it can be a very good indicator to identify strengths and weaknesses of a player as well as some aspects of his style of play.

Dortmund really has something to be excited about when it comes to their academy players as there seem to be really talented players full of potential in their youth teams. If the club continues this philosophy of developing young players, and then actually give them the chance to play, then they will certainly continue to benefit a lot.