I remember a point when I was growing up when football in Eastern Europe had a genuine sense of mystique. The UEFA Cup (now the UEFA Europa League) and The European Cup (now the Champions League) would offer a rare glimpse into the players and clubs of which much was spoken but not known. This was before the internet was truly a World Wide Web and certainly before social media offered a depth of knowledge and the wisdom of the crowd from people who watched football in this part of the world.

While Steaua Bucharest, of Romania, winning the European Cup (and beating Barcelona in the process) in 1986 is too soon for my conscious memory, I do have some memory of Crvena zvezda (Red Star Belgrade) beating Marseille in 1991 to win the same tournament. While the creation of the Champions League, which is weighted in favour of clubs from the top-5 leagues of Europe, has diminished the impact of clubs from the east of the continent, there is still a plethora of talented players coming from the region and as such, it is a fascinating region from a talent identification perspective.

In this article, I have identified five interesting young players who are still playing in Eastern Europe. There is a central defender, a fullback, a central midfielder, a winger or wide forward and a forward player. These players are based in different markets with two based in Ukraine and one each based in Serbia, Russia and Croatia. I have deliberately tried to identify players who may be newer names to you, the reader, and whose profiles are not widely known as opposed to selecting some of the bigger names from the region.

The players will be presented using data profiles that I have built in Tableau with all of the data being extracted from Wyscout. These data profile dashboards offer a quick way to assess a player’s impact in terms of their metrics and are useful in the recruitment process. 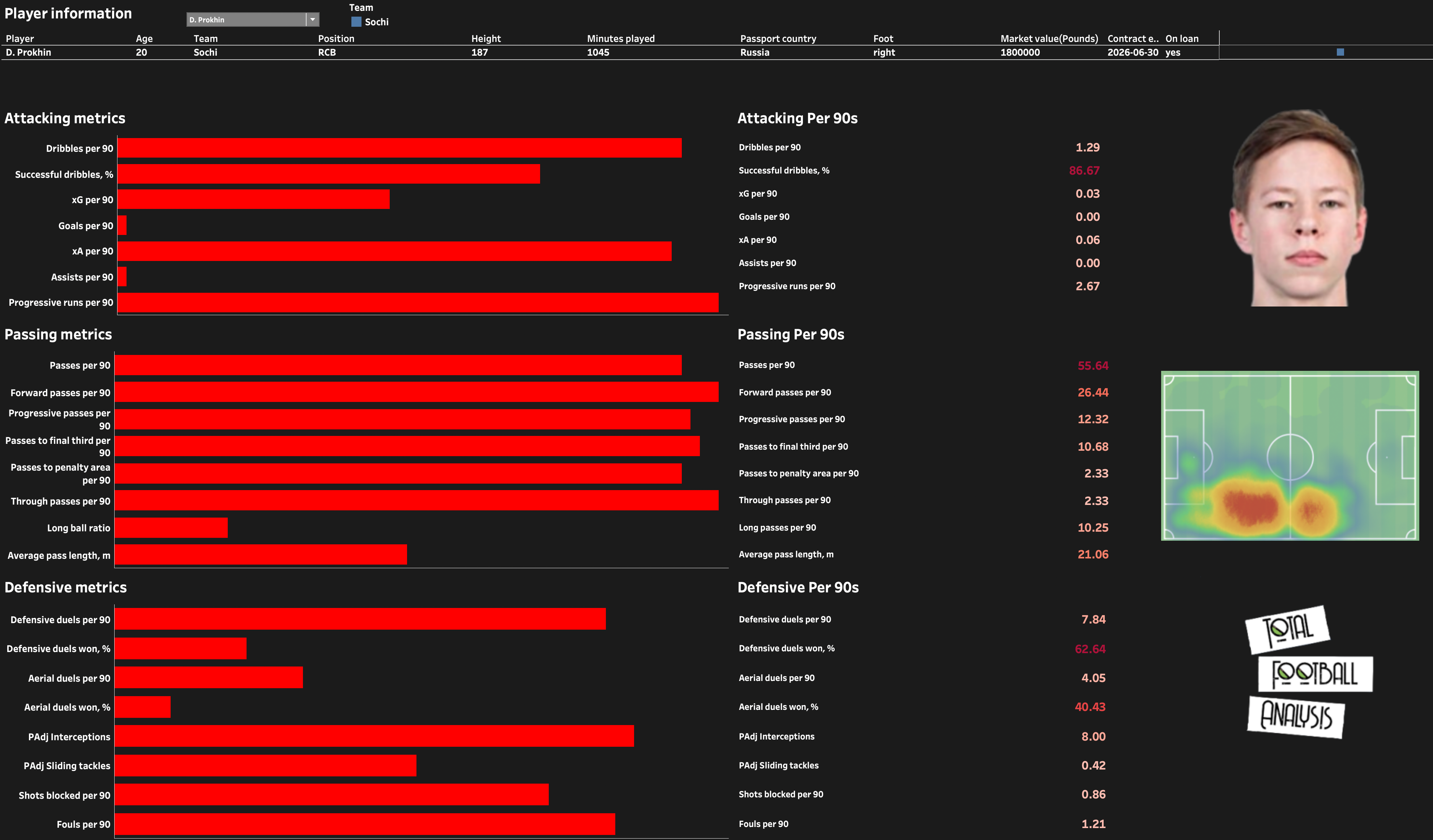 The first player on our list is the 20-year-old Russian central defender Danila Prokhin. He is a product of the youth system at Zenit Saint Petersburg, although he never made an impact at the first-team level at his boyhood club. Instead, he left to join Rostov on a free transfer in July of 2021 before immediately going out for a loan spell with Sochi. At this point, Prokhin has been capped up to U21 level by the Russian national team.

Prokhin is listed at 187cm | 6’2” and he is predominantly right-footed and therefore more comfortable and natural when playing as the right-sided central defender.

He profiles very much as a modern central defender in that he is extremely comfortable in possession of the ball with the ability to break lines or change the angle of the attack through diagonal passes but this has a trade-off in that he is perhaps not as aggressive and commanding as you would want against the ball.

This lack of aggression comes out somewhat in his metrics with an average of 7.84 defensive duels per 90 and a success rate of 62.64% but his aerial duels are perhaps more concerning with an average of just 4.05 per 90 and a success rate of 40.43%. He does also have 8 possession adjusted interceptions per 90 on his profile, which shows that he reads the game well and is strong positionally.

At this point in his career, I feel as though Prokhin needs to develop a little more of an edge to his game in the defensive phase if he is going to become the dominant central defender that he has the potential to be. His ability on the ball, however, will be a huge benefit to Rostov once he returns to his parent club at the end of this season. 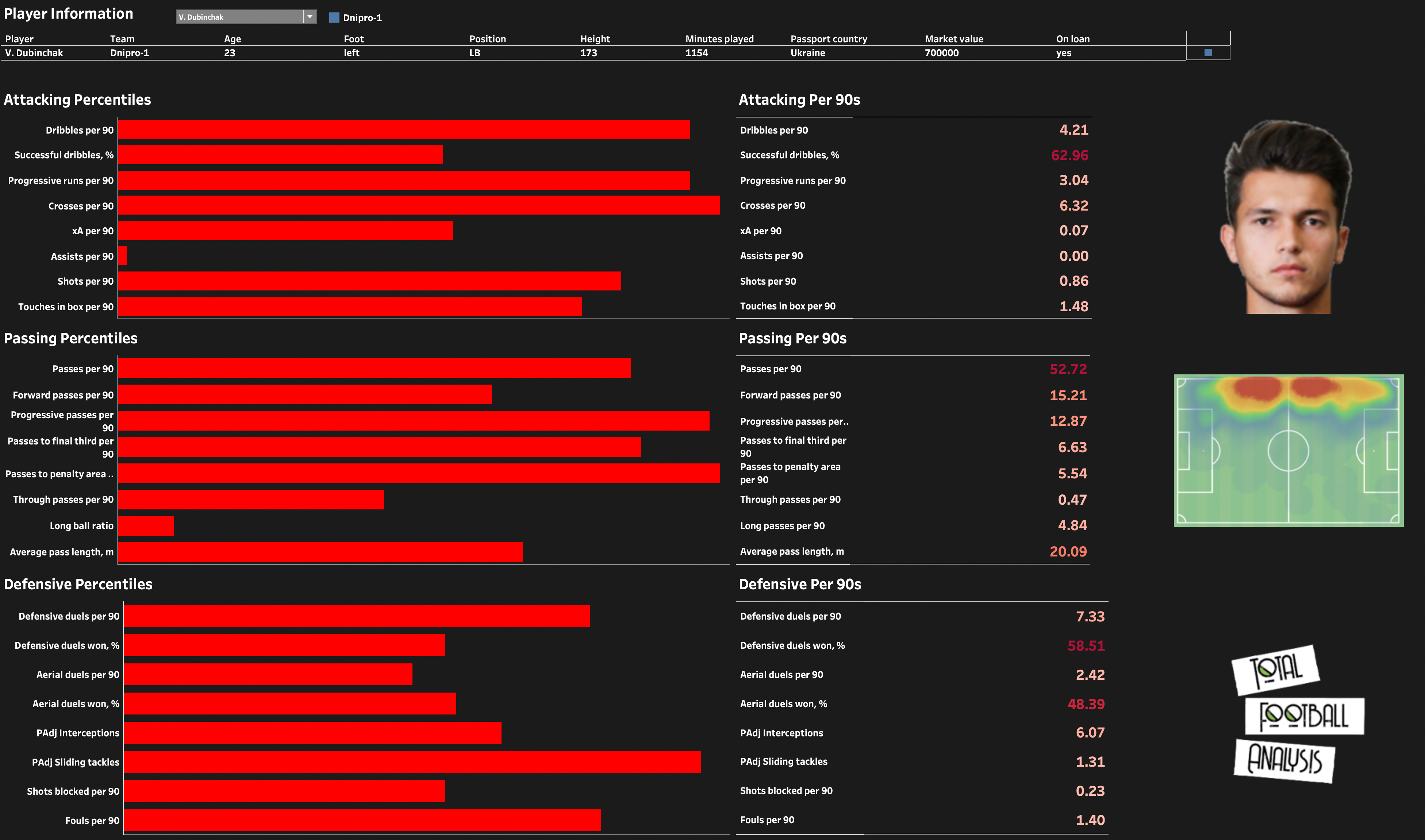 Our next player is the 23-year-old Ukrainian left-back Vladyslav Dubinchak. He is currently on loan in the top-flight of Ukrainian football with Dnipro from Dinamo Kyiv, but he is performing extremely well and it will not be a surprise to see Dubinchak integrated back into the first-team squad when he returns to his parent club.

This is the third loan spell that Dubinchak has spent away from his boyhood club but it is safe to say that he has not performed this well in any of those previous loans. He has also been capped by the Ukrainian national team up to U21 level so far.

He is a modern attacking fullback who is listed at 173cm | 5’8” and he is predominantly left-footed. He has shown flexibility in terms of his positioning with the ability to play as a traditional fullback or as a wingback on the left-hand side.

His data profile shows an extremely well-rounded player who is capable of performing well in all phases of the game. In the defensive set of metrics, he is averaging 7.33 defensive duels per 90 with a success rate of 58.51% which is positive for a fullback. This is combined with 6.07 possession adjusted interceptions as he shows the ability to fill space and close passing lanes before stepping in to intercept the ball.

This profile and the metrics being produced this season by Dubinchak suggest a player who is ready to take the next step in his career. If he is still not given first-team opportunities next season at Dinamo Kyiv, then it may be time for him to look for a permanent move elsewhere. At this point, I would not be surprised to see a lot of interest being generated in his signature. 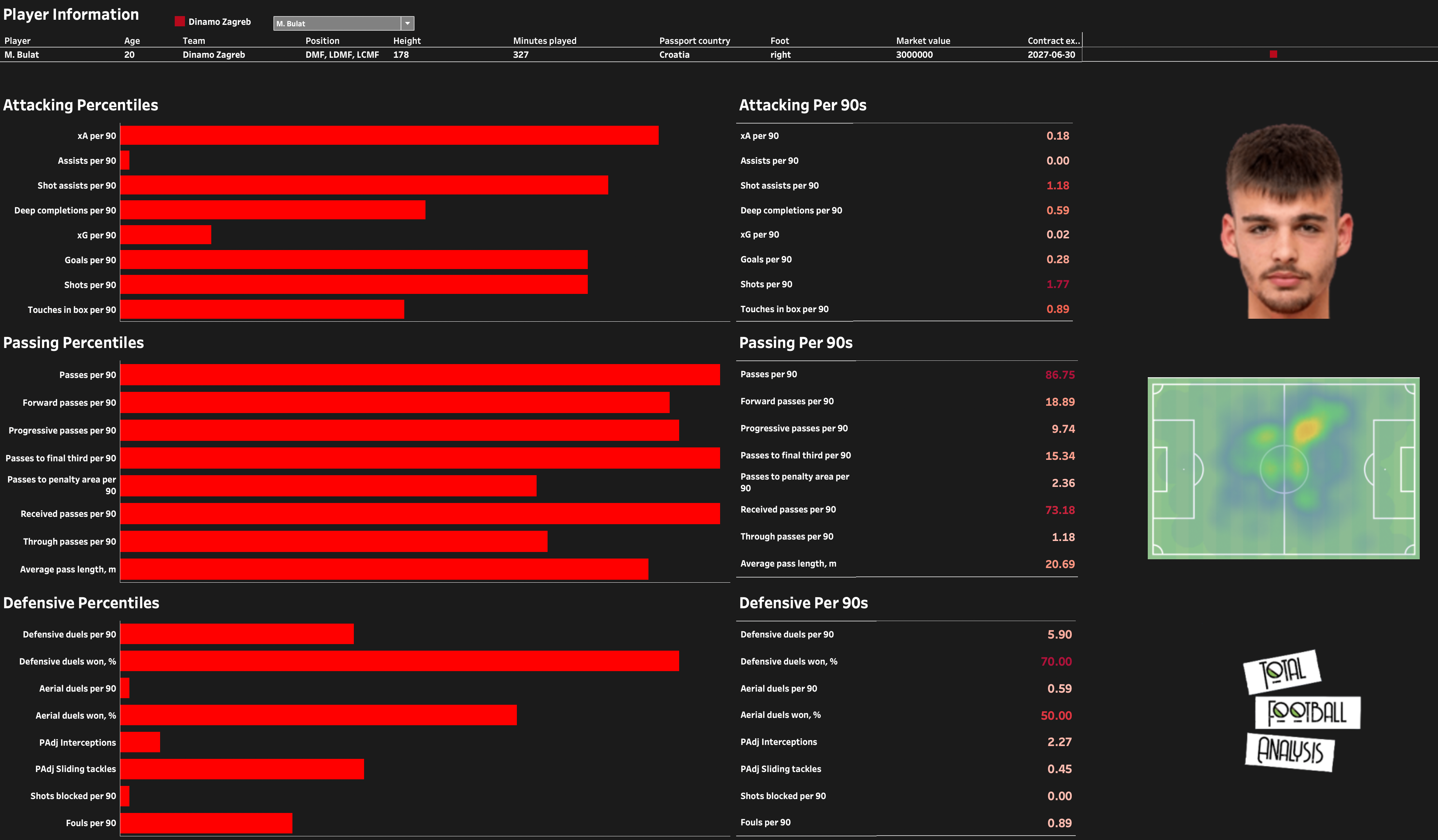 Our next player is the 20-year-old Croatian U21 international Marko Bulat of Dinamo Zagreb. He is not the product of the famous youth academy at Dinamo and instead he developed at his home town club HNK Sibenik. Dinamo are reported to have paid just under £2M to secure his signature in February of 2021 before agreeing to allow Bulat to spend the remainder of the 2020/21 season on loan at Sibenik. This season has seen the young midfielder firmly integrate himself into the first-team picture at his new club. He has also been awarded his first cap at U21 level by the Croatian national team.

Bulat is listed at 178cm | 5’10” and he is predominantly right-footed. He profiles as a midfielder who would be comfortable playing either as a 6 or as an 8.

I should make it clear at this point that this data profile has been created with the smallest sample size of all those that we will be looking at, as Bulat has only played 327 minutes so far this season in the Croatian top-flight. This is well over the 270-minute minimum that I set for these articles though.

His passing numbers are eye-catching with an average of 86.75 passes per 90 with 9.74 progressive passes per 90 and a staggering 15.34 passes to the final third per 90. Given that Dinamo tend to play against teams domestically who will look to sit back and absorb pressure, a creative passer in midfield who can break lines is essential for them. I would expect Bulat to start to gain significant minutes at Dinamo over the next 18 months and I would not be surprised to see the young midfielder linked with moves to a top-5 league sooner rather than later. 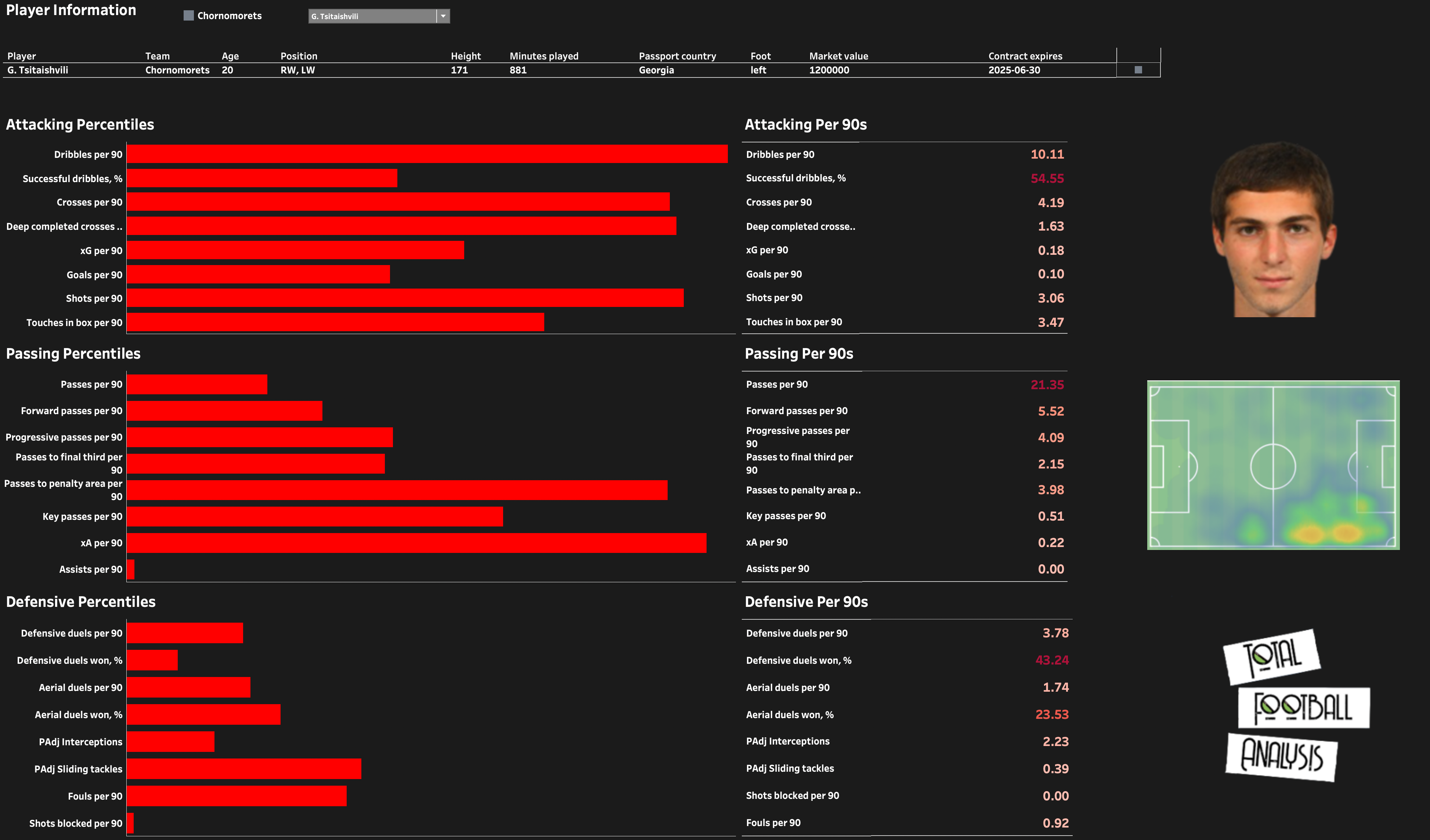 The fourth player on our list is another from the Ukrainian top-flight and another who is currently on loan from Dinamo Kyiv in the 20-year-old Georgian international winger, Georgiy Tsitaishvili. The young winger is a product of the youth system at Dinamo Kyiv and he is currently on his second loan spell. He has dual Ukrainian and Georgian nationality and he had represented Ukraine all of the way through to U21 level before choosing to switch allegiance to the Georgian national side this year. He has already been given 5 full international caps by the Georgian national side.

Tsitaishvili is listed at 171cm | 5’7” and he is predominantly left-footed although he prefers to play on the right of the attack where he can cut inside and threaten in towards the opposition goal.

Tsitaishvili feels like a player who is on the verge of breaking out. Do not be surprised if you start to see his name circulating around social media accounts in the near future. 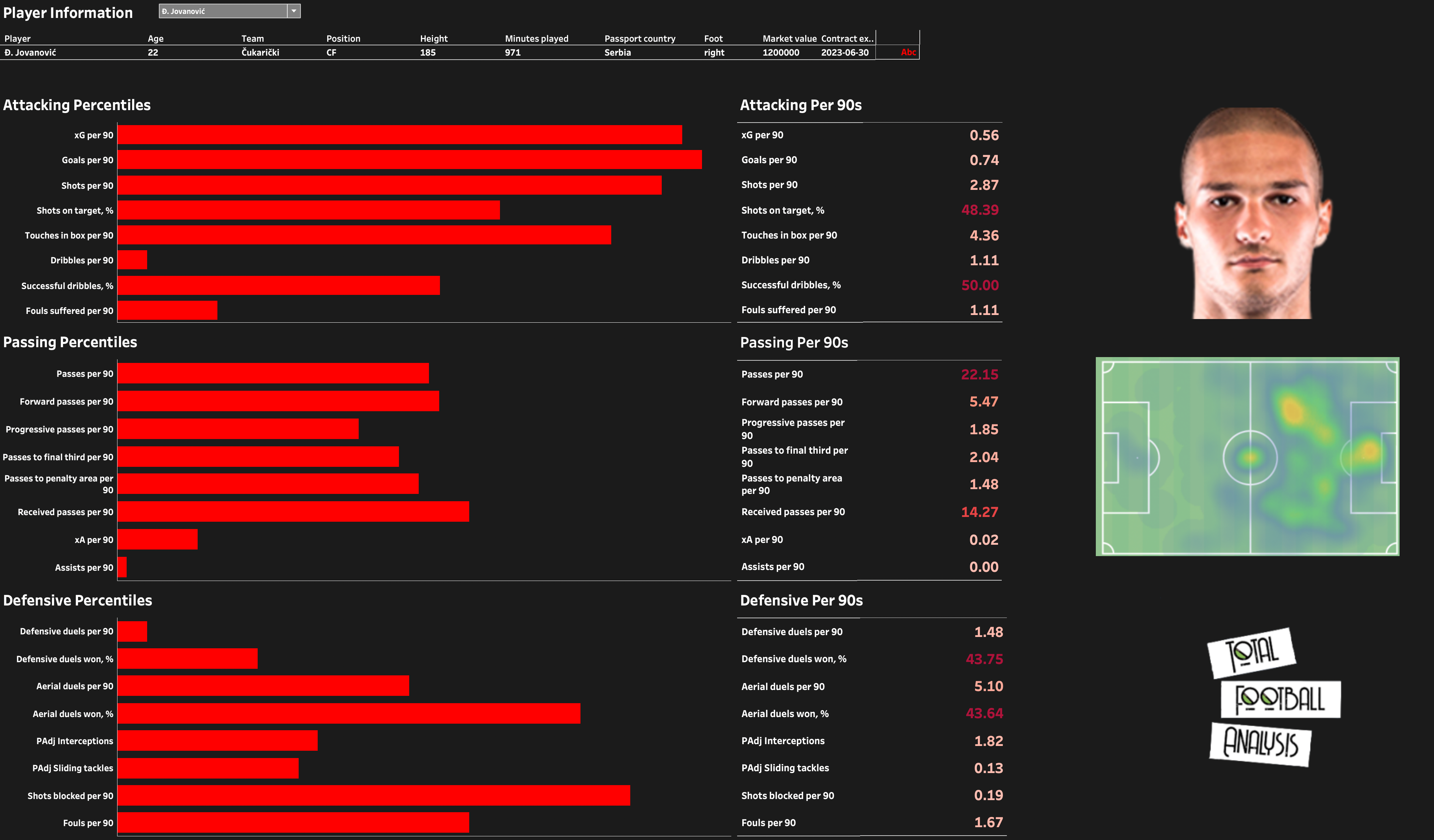 The final player on our list is the 22-year-old Serbian forward Djordje Jovanovic. He is currently contracted to FK Čukarički in the Serbian top-flight but Jovanovic has had something of a nomadic start to his young career. He was developed in the youth system of Partizan Belgrade but left Serbia in 2018 to move to Belgium with Lokeren. He then moved again, this time to Spain, to join Cádiz, before also spending time on loan at Cartagena, before eventually moving back to Serbia to join Čukarički in January 2021.

He is a dynamic forward player who is listed at 187cm | 6’2” and he is predominantly right-footed.

With his attacking output, I would not be surprised to see clubs from Western Europe again registering an official interest in the young Serbian forward.

There is so much depth of talent in Eastern Europe that it remains a goldmine in terms of talent identification and recruitment. The sheer breadth of technical quality, in particular, should be of interest to clubs across the continent and in the top-5 European leagues.