There is little doubt Premier League champions Liverpool have been the most dominant English side over the past two seasons. Winning the UEFA Champions League, the UEFA Super Cup, the Club World Cup, and most recently the Premier League, the Reds have enjoyed one of the most successful terms in club history under the guidance of Jürgen Klopp. One of Liverpool’s recent academy graduates has also been making strides, primarily in the past six months in the EFL Championship.

After a lack of playing time at the depth-filled forward positions for Liverpool, striker Rhian Brewster temporarily departed the club for a six-month loan to Swansea City in the January transfer window. Since joining up with his former youth national team manager Steve Cooper (England and Brewster won the 2017 U-17 World Cup under Cooper, with Brewster also winning the Golden Boot), the 20-year-old Englishman has aided the Welsh club to a sixth-place league finish as they came one match away from reaching the Championship Promotion Playoff Final. This scout report will examine how Brewster was utilised at Swansea, provide a data analysis of his performance in relation to other Championship strikers, and discuss what his successful loan spell could indicate for his future.

When considering Liverpool centre-forwards, Brewster plays in the areas similar to a true striker- he’s dissimilar to Roberto Firmino, who is more often between the two attacking lines rather than leading the front. In Brewster’s heat map at Swansea, His positioning in the attacking half of the pitch is evident. While mostly occupying the central areas, he did at times drop into the wider or deeper spaces on the pitch at the Welsh club to help progress the ball. 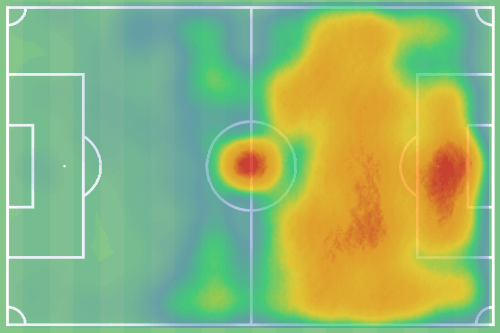 At Swansea, Brewster was usually seen as the primary target for the final pass in possession. Below we can see Brewster in his central striker position. Situated in front of the opposing back line, he has a number of routes available to him. Here he opts to make a run between the two centre-backs on a potential cross, and the far-side winger Aldo Kalulu likewise darts into the space between the centre-back and the left-back. 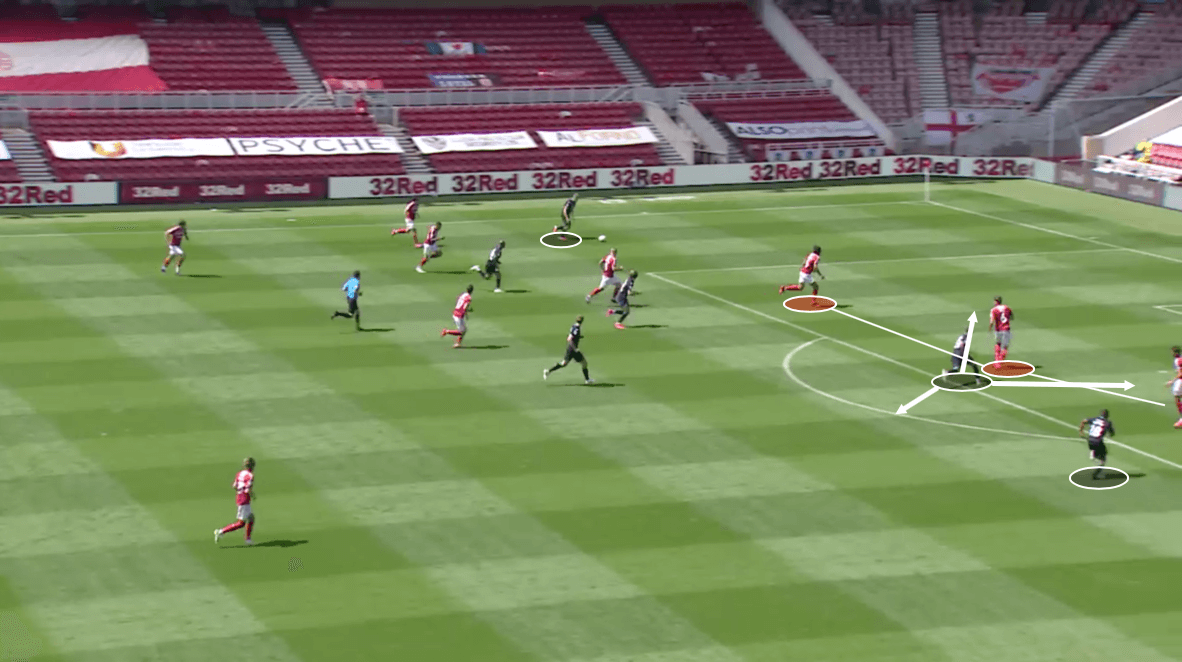 Here is an example of Brewster in an occasional two-man front. As the ball progresses up the far side of the pitch, Brewster moves from the left half-space centrally into space, again between the two opposing defensive lines. 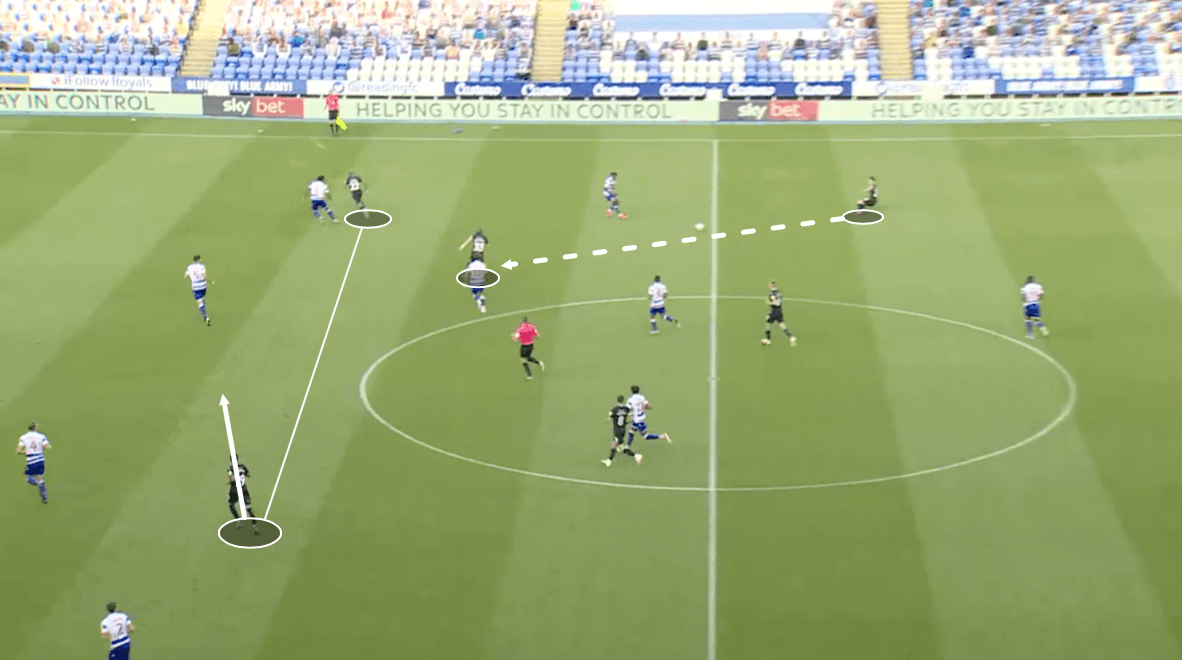 Brewster’s movements are calm and assertive off the ball. He consistently scans the pitch for space opening up and is composed when the initial action fails, immediately looking for the next action to take. Below, Brewster sees the centre-back shifting inside towards the ball, so he moves forward into an open passing lane as the midfielder receives the back pass. 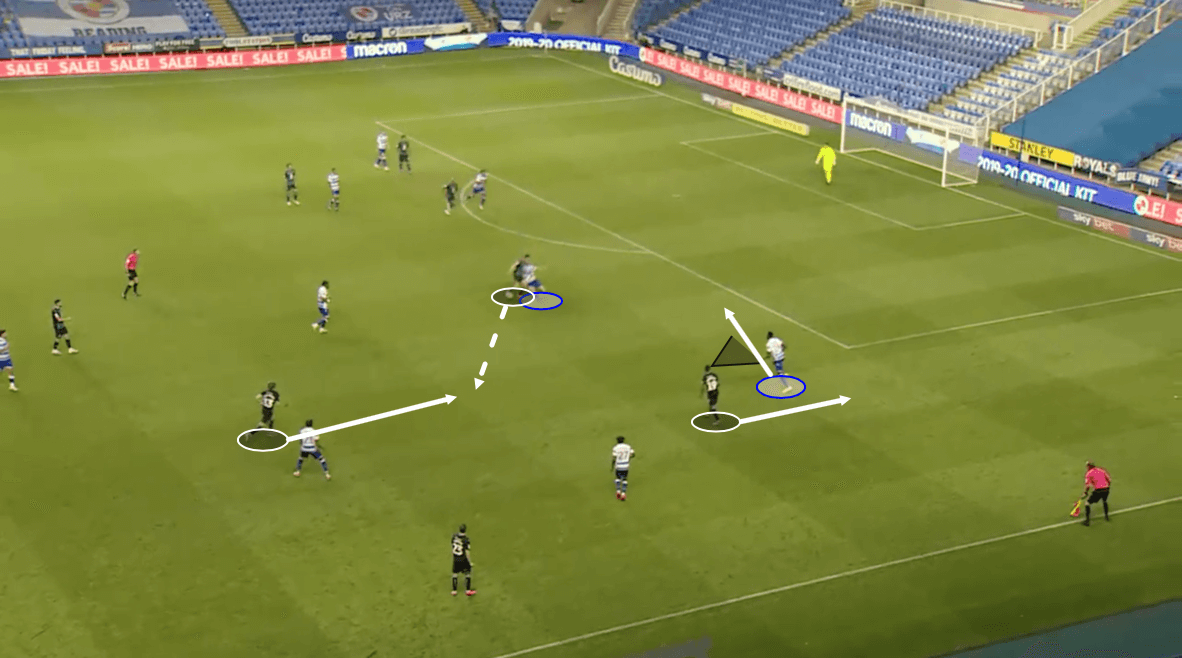 After the pass initially failed to reach him, Swansea counterpress effectively. Once again Brewster scans the defence around him, and seeing the defensive lines compacting, he shifts wide to provide a passing outlet. On this play, Brewster had ample time and space to complete an accurate pass into the box, which was then crossed in for a goal. 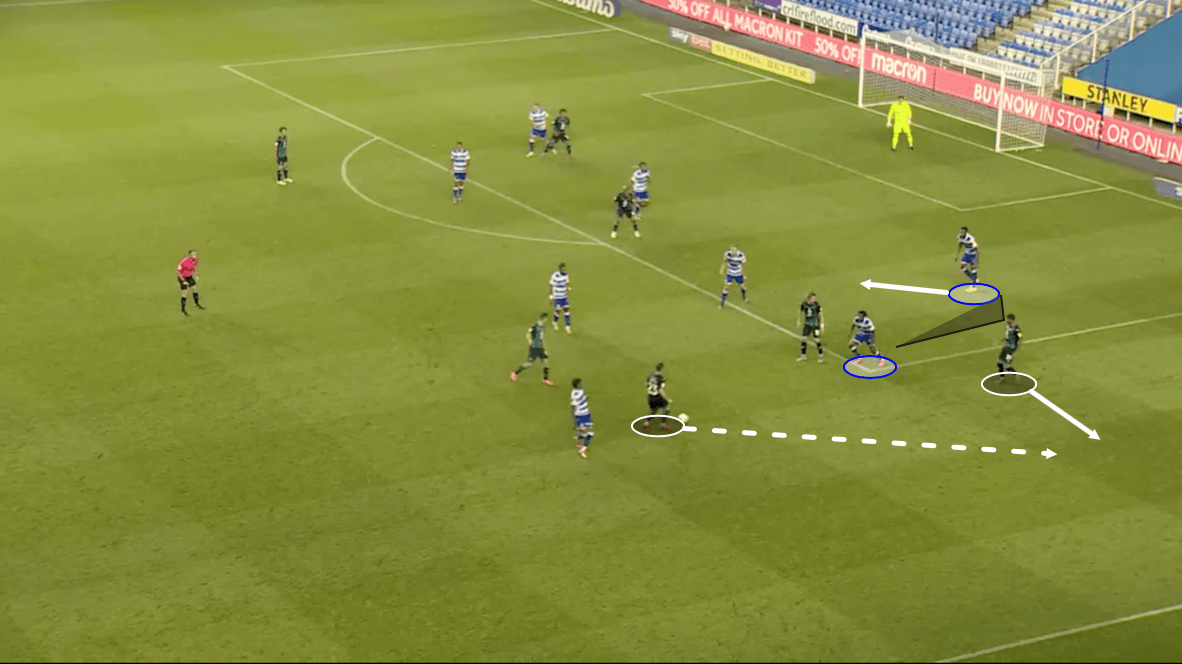 As stated, Brewster is more than able to participate in ball progression tactics from the forward position. This primarily involves dropping back to aid buildup play with his back to goal or drawing out defenders to open up space for his teammates. Below is a basic example. Brewster drops back in the left half-space to create a passing pivot for attacking teammate André Ayew. He then immediately turns and darts towards the box, eventually ending up with the opening goal. 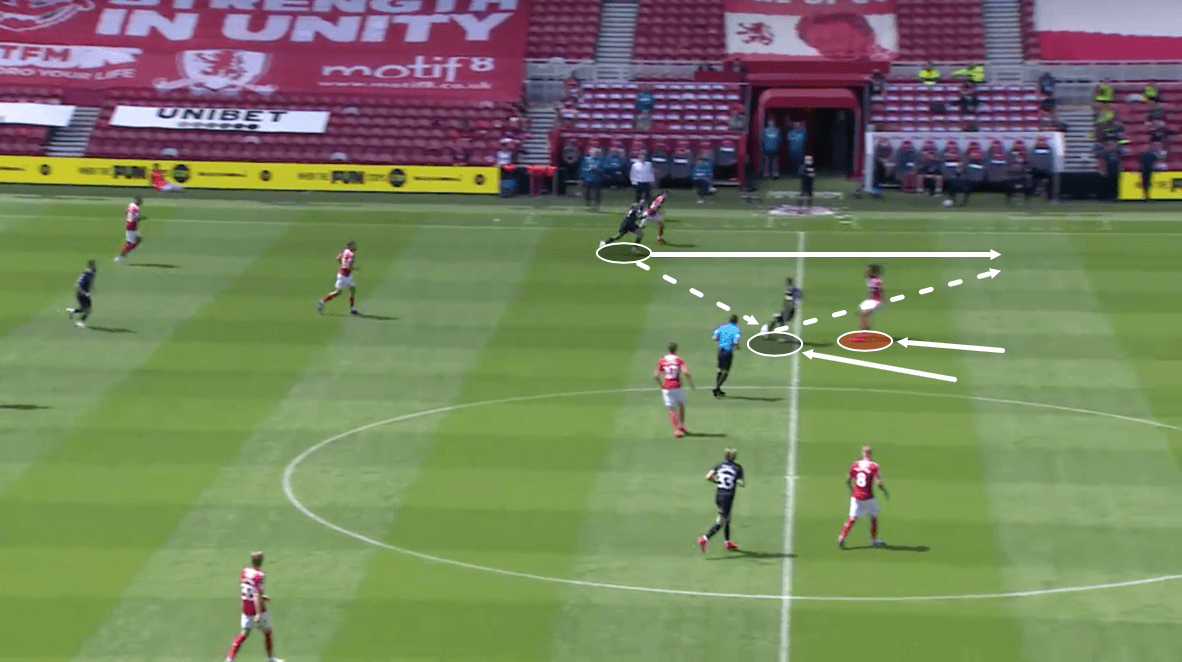 Below is another example of Brewster’s ability to manipulate and take advantage of space. After receiving the pass with his back to goal, Brewster knows the opposing defensive midfielder is about to press him, so he completes a header over said midfielder and into that opened up space for his teammate to connect to. 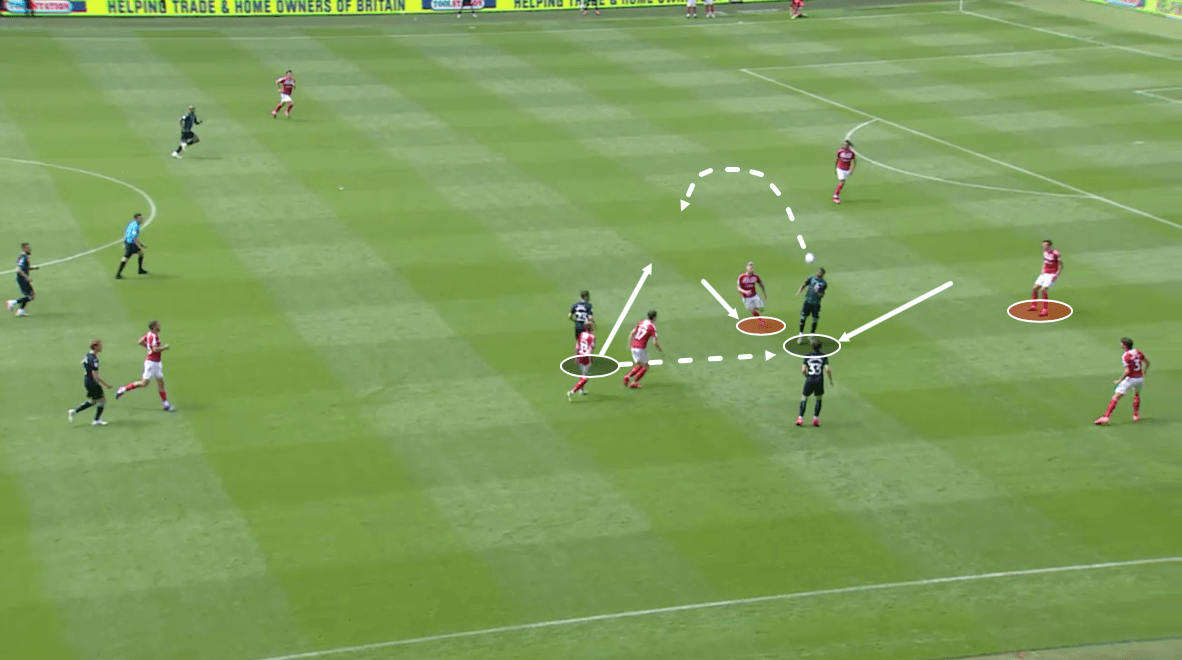 Again Brewster then turns and heads towards the penalty area. The previous pass lured the ball-side centre-back away from his defensive position, so Brewster makes a run into that space and receives the return pass. 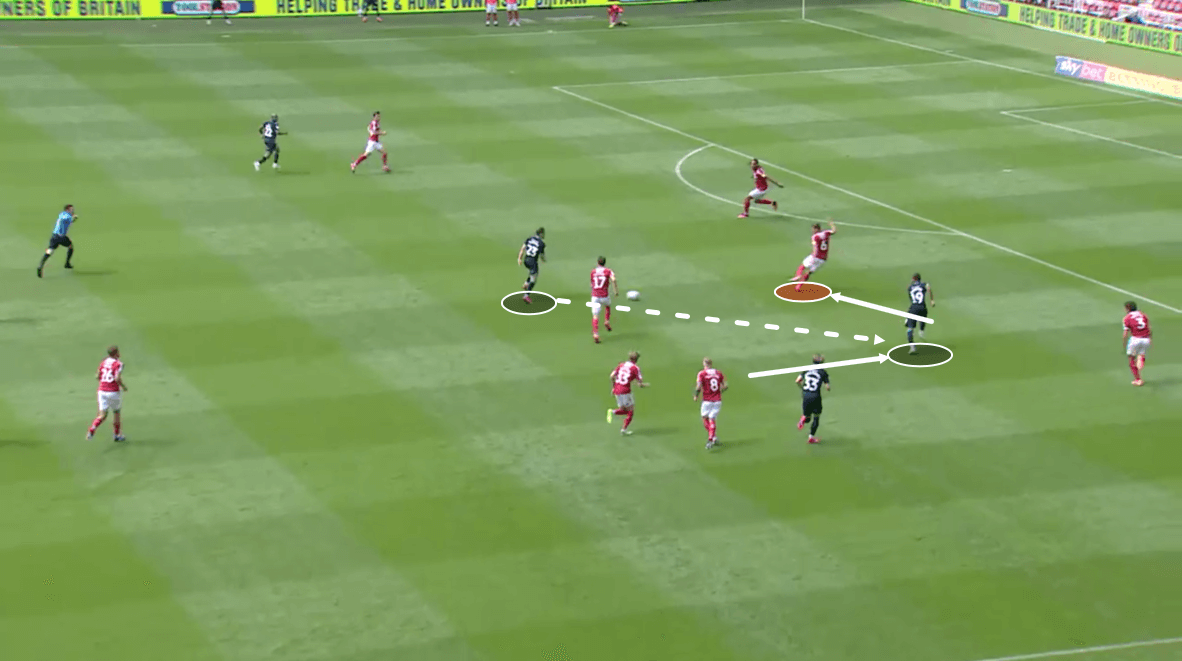 At Swansea, Brewster had to do drop back more often than preferred, as his teammates struggled to progress the ball effectively without him against superior opposition, for example in the second leg of the Promotion Playoff semifinal against Brentford. Below is Brewster’s heat map for that match; notice how far away from the penalty area a vast majority of his positioning was. 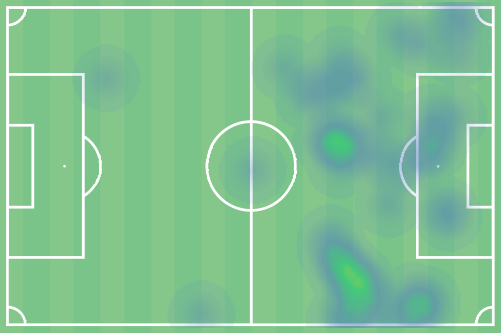 An in-match example of Brewster being required to drop farther back on the pitch than should be necessary is seen below. Brewster is forced to drop back almost to the halfway line to receive the ball. While his movement does create space for the midfielder to break into, this left the midfielder as the lone attacker on that side of the pitch in the final third. Attacking midfielder Conor Gallagher- who was also on the U-17 World Cup-winning England side- is able to get a shot off but it’s well saved by the keeper. As a striker, Brewster would have had a more effective shot if he were in that position. Long passes also can equate to predictability when it comes to where on the pitch the defenders should apply pressure. 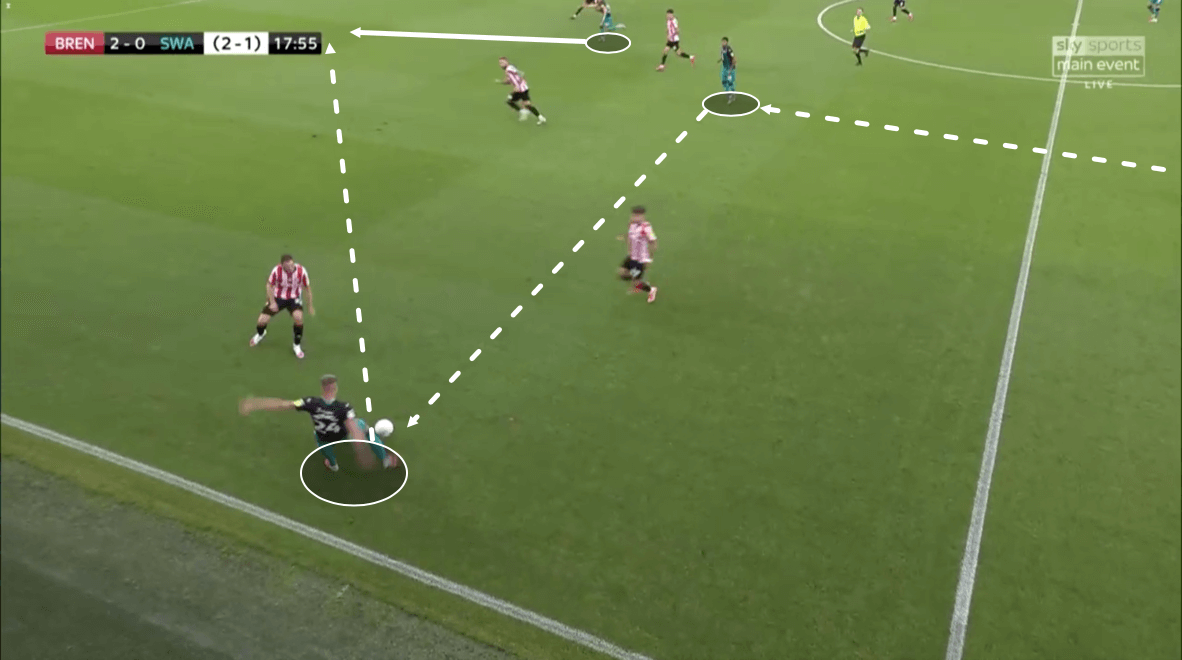 Not only is this not beneficial to Brewster’s role and therefore the attacking ability of the team as a whole, but as a younger player Brewster is not without poor decision making on the ball at times. Below is one such example. After receiving a pass with his back to goal, instead of completing the one-two passing action which would lead his teammate onto the ball into an open lane between the two centre-backs, Brewster attempts a backheel through the legs of the pressing centre-back. This pass was easily intercepted by the defender. 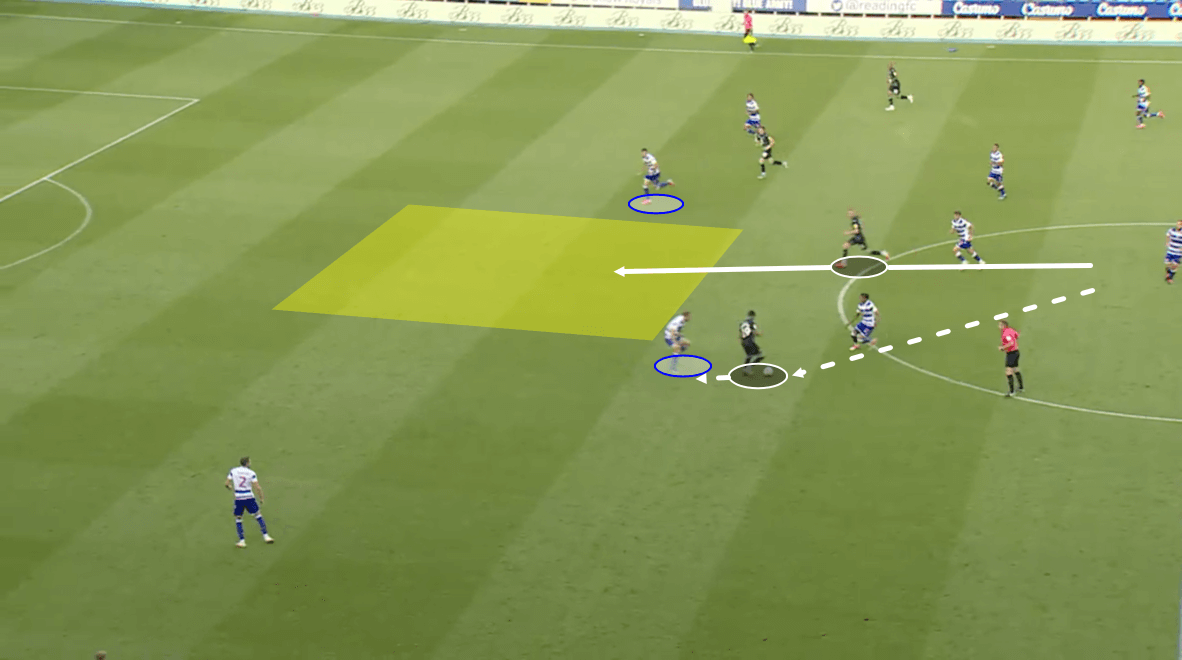 Fortunately, decision-making in various situations on the ball can be taught in training over time, and at Brewster’s age, he has plenty of time to learn. The more telling evidence of Brewster’s ability to help deeper back on the pitch during buildup is his vision of progression.

The following example is one such occurrence. Once again, Brewster drops back on the pitch. Not only does he notice the opposing defender marking him, but he also scans and sees the ball-side defensive midfielder following Gallagher into the space Brewster just opened up for him. Brewster continues his shift and plays a quick passing movement with Matt Grimes, keeping his marker in the wide area. 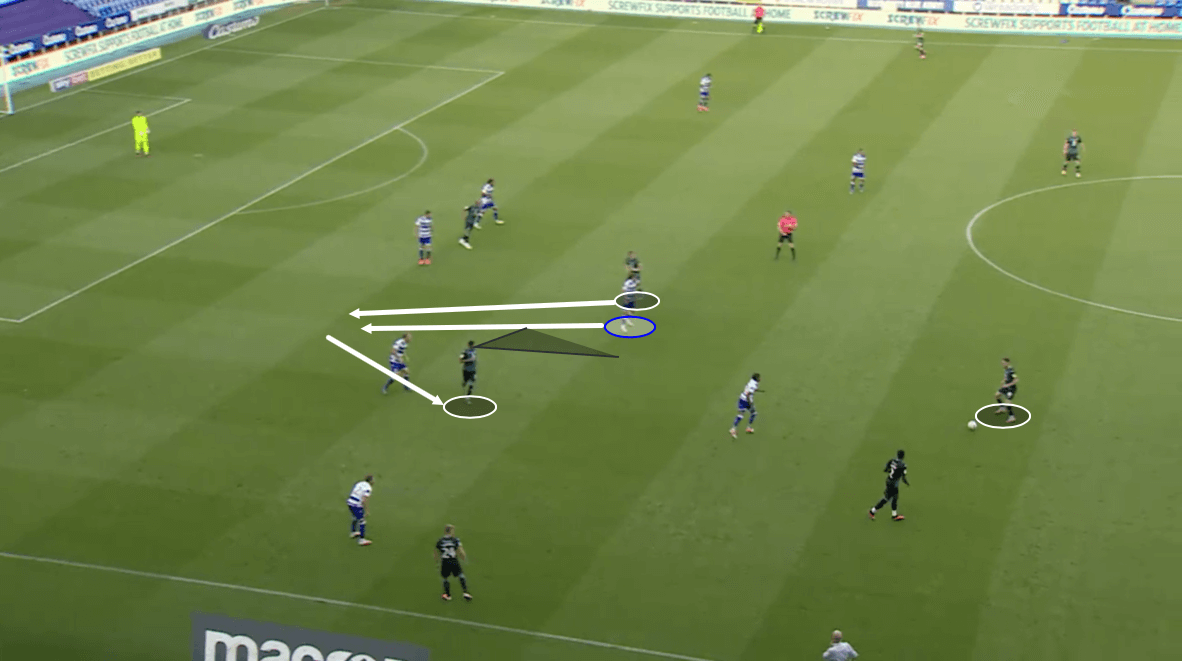 Brewster follows up the quick pass by taking advantage of the open space centrally, as can be seen below.

Brewster’s finest trait is his finishing. He has an exceptional ability to hit a shot accurately and with power. Continuing the sequence from the last frame, Brewster shifts inside with his marker now off of him thanks to the short passing and Grimes’ body feint. The young striker finds himself in a remarkably open space in the attacking half. He takes two touches forward and strikes a powerful shot into the top right corner of the net. 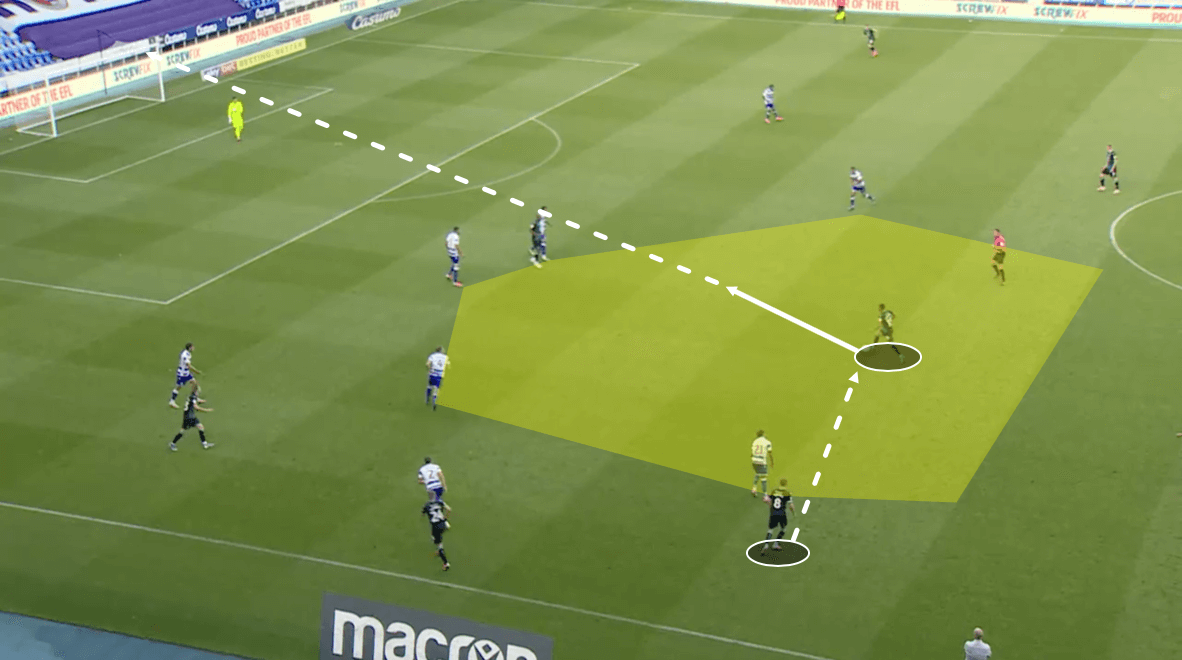 This ability to score from a variety of areas in the attacking half isn’t just a single sample. Here we can see Brewster’s last 75 shots. The versatility of Brewster’s finishing is easily visible, with goals and shots on target coming from as far back as the start of the final third to almost as wide as the 18-yard box. 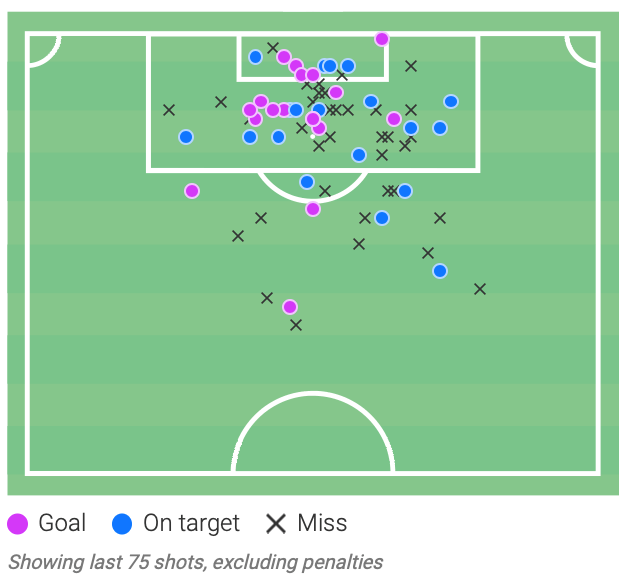 The following example shows Brewster’s control of his finishing. After pushing deep into the box in front of a low block back line, Brewster receives the ball on a bounce and hits it with one touch into the open left area of the goal. 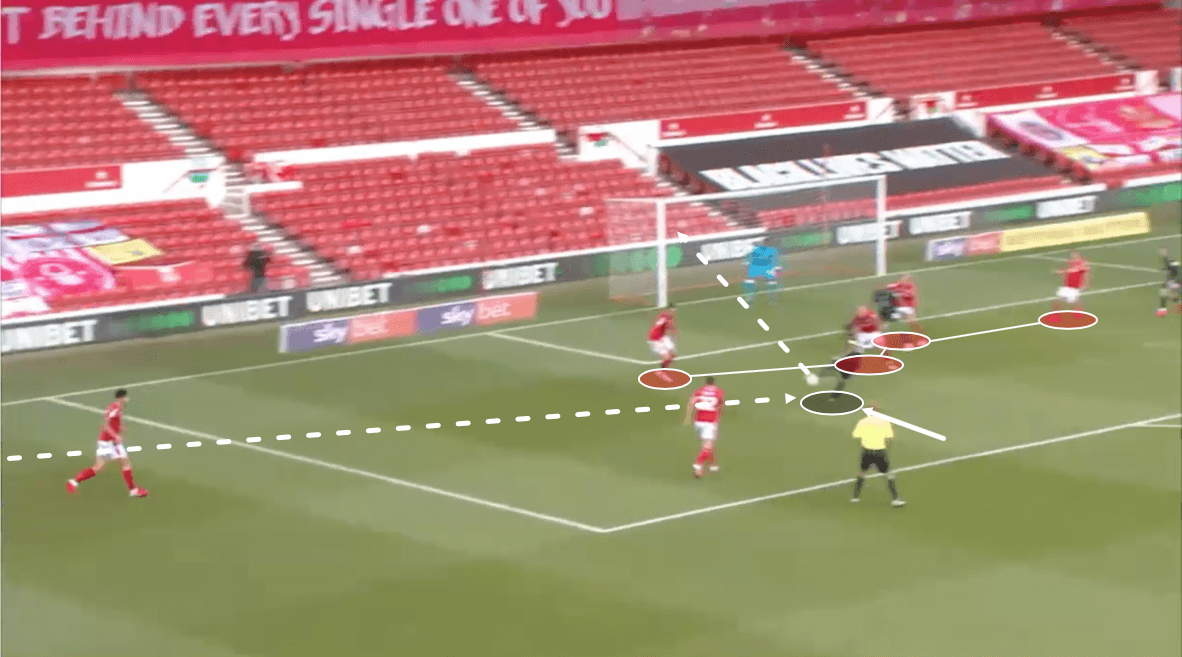 He has also shown he can take free kicks, for example below against Milwall. 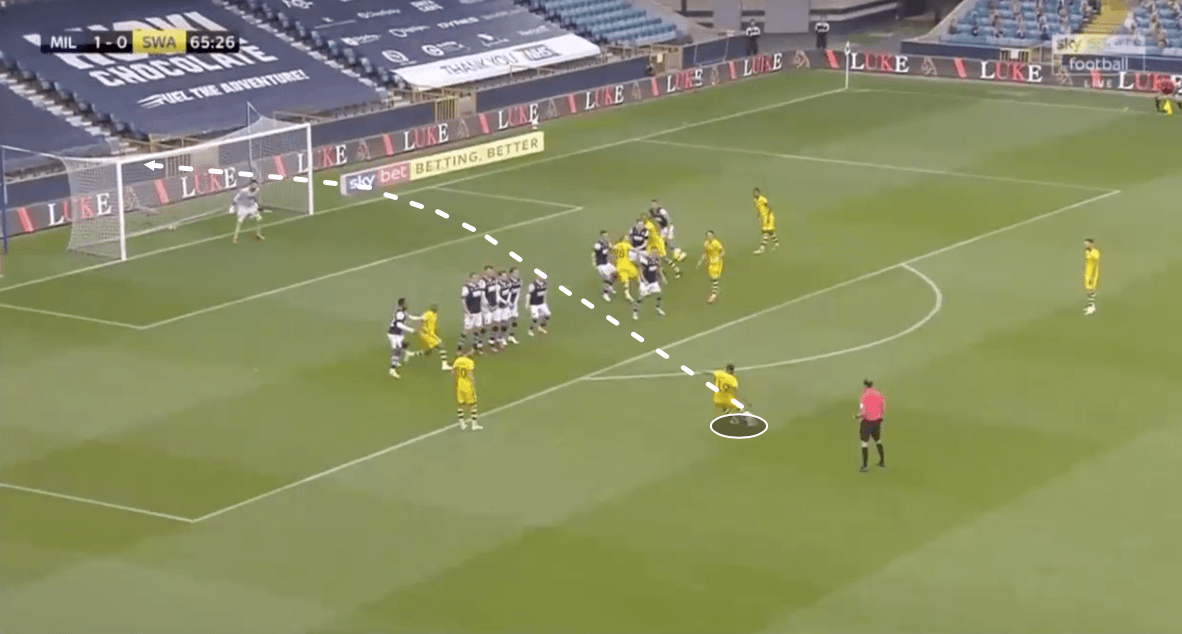 Brewster finished the Championship season with 11 goals in 22 total matches, yet tallied a 7.41 xG. Outperforming xG is often controversial, with some analysts arguing it equates to a high-quality finisher, and others stating it means the player will level off in the future.

As a striker, Brewster is a sound defender on the press. Though Swansea weren’t the most press-heavy side in the Championship, Brewster was occasionally a key factor when they did. In the figure below, immediately after they lose the ball, the three nearest Swansea players (Brewster included) counterpress the ball directly, forcing the turnover. 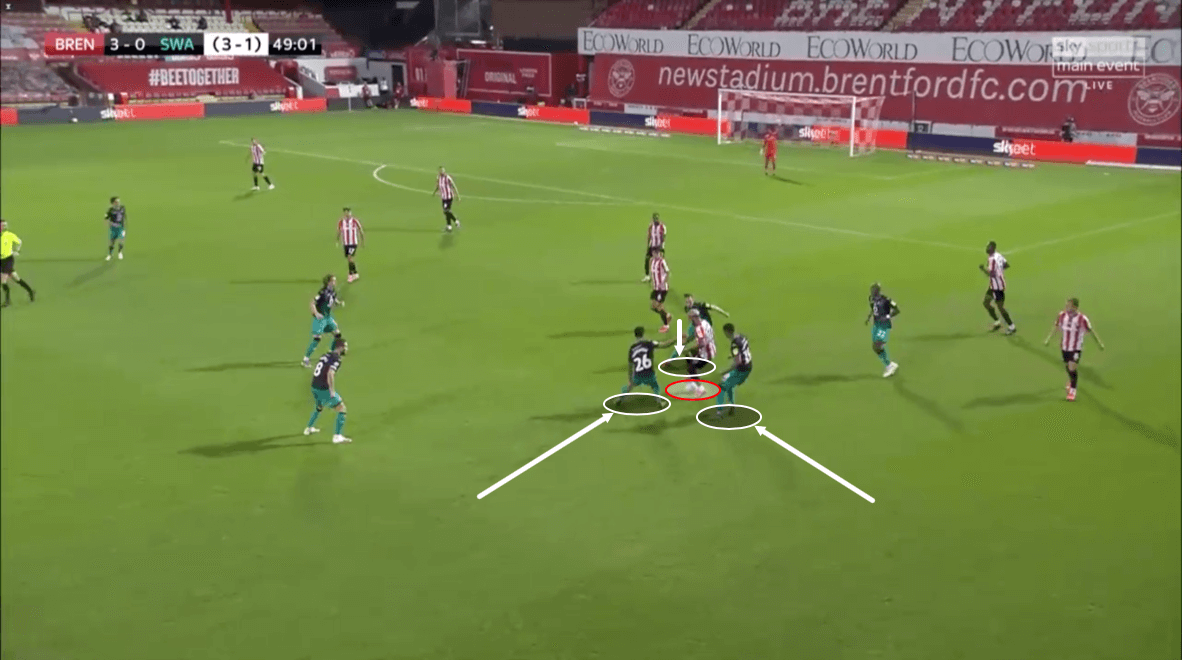 Individually, Brewster presses the ball directly and aggressively, relying on his teammates behind him to press or cover any potential passing outlets. Here, he continuously presses the ball as the two centre-backs connect on a pass. In this scenario Brewster’s work pays off, as the ensuing pass from the opposing right centre-back to the midfielder is poorly struck and is intercepted by Gallagher. 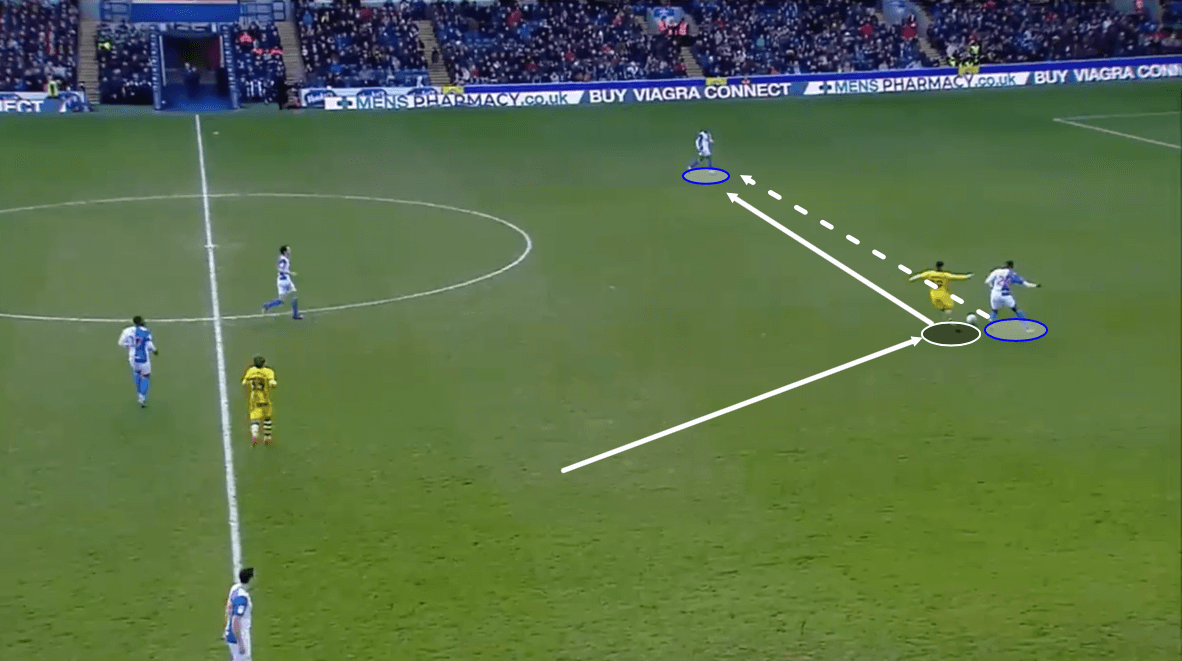 Brewster has shown in other non-press related situations that he has both patience and the intelligence to scan the area around him, so if a manager wanted Brewster to turn towards a more careful, cover shadow-focused pressing system, he likely wouldn’t have much trouble doing so.

Lastly, we will take into account the statistics of Brewster’s performance at Swansea. There are two scatterplots below involving all strikers in the Championship who have played over 900 minutes this season. This first scatterplot attempts to uncover how efficiently a striker converts his shots into goals by taking into account his shot frequency. Here, Brewster is right alongside the top goalscorers in the league, such as Brentford’s Ollie Watkins, Bristol City’s Nahki Wells, and Nottingham Forest’s Lewis Grabban. With a decent volume of shots (2.22 per 90), Brewster converts them at a higher level (22.45%) than most other strikers in the Championship. 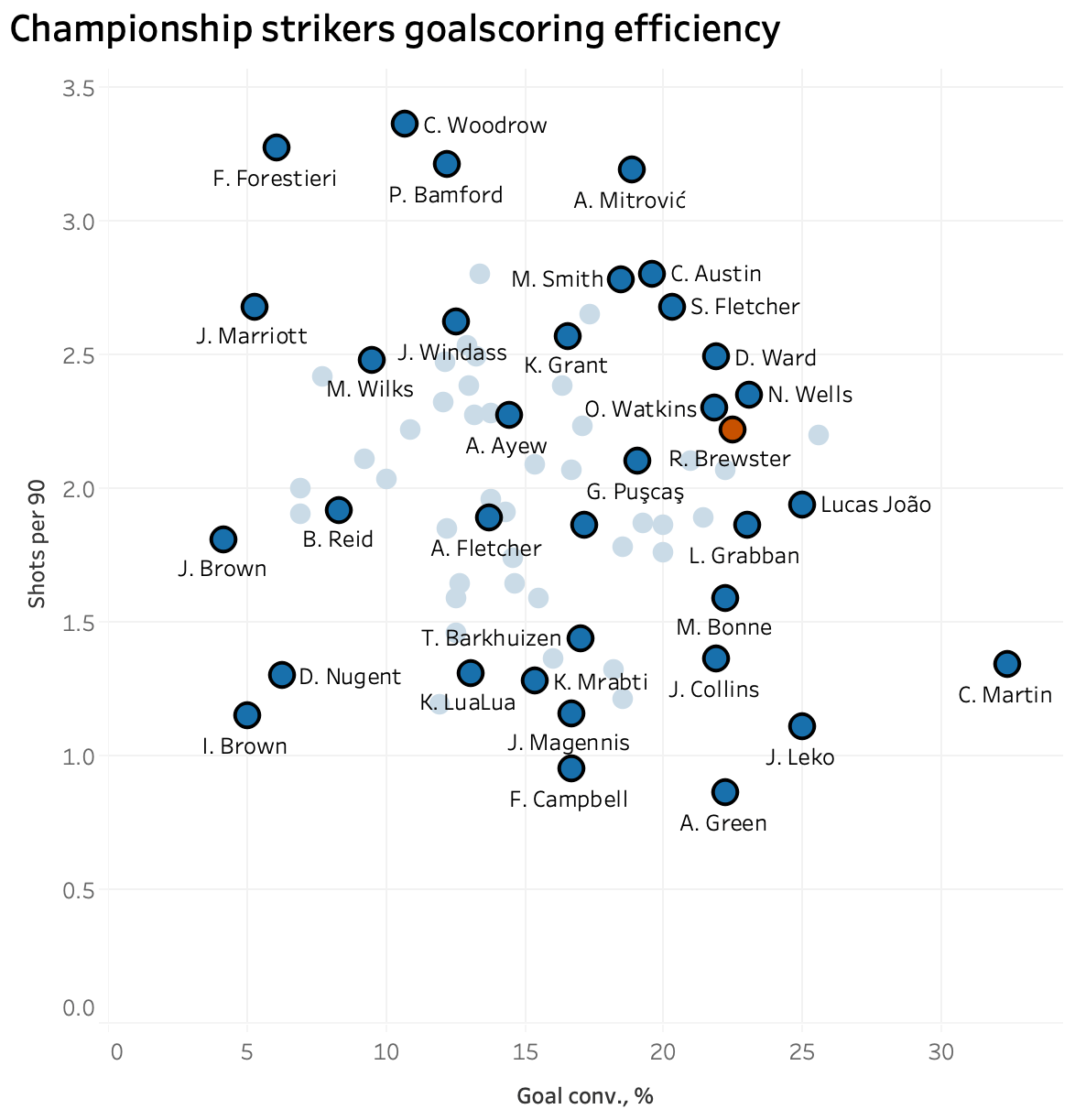 This second scatterplot takes into account how close the striker often is to goal when on the ball. Despite holding one of the lowest touch frequencies inside the opposing box (just 2.18 touches), Brewster still maintains a position in the middle of the pack regarding expected goals per 90 minutes (0.34). 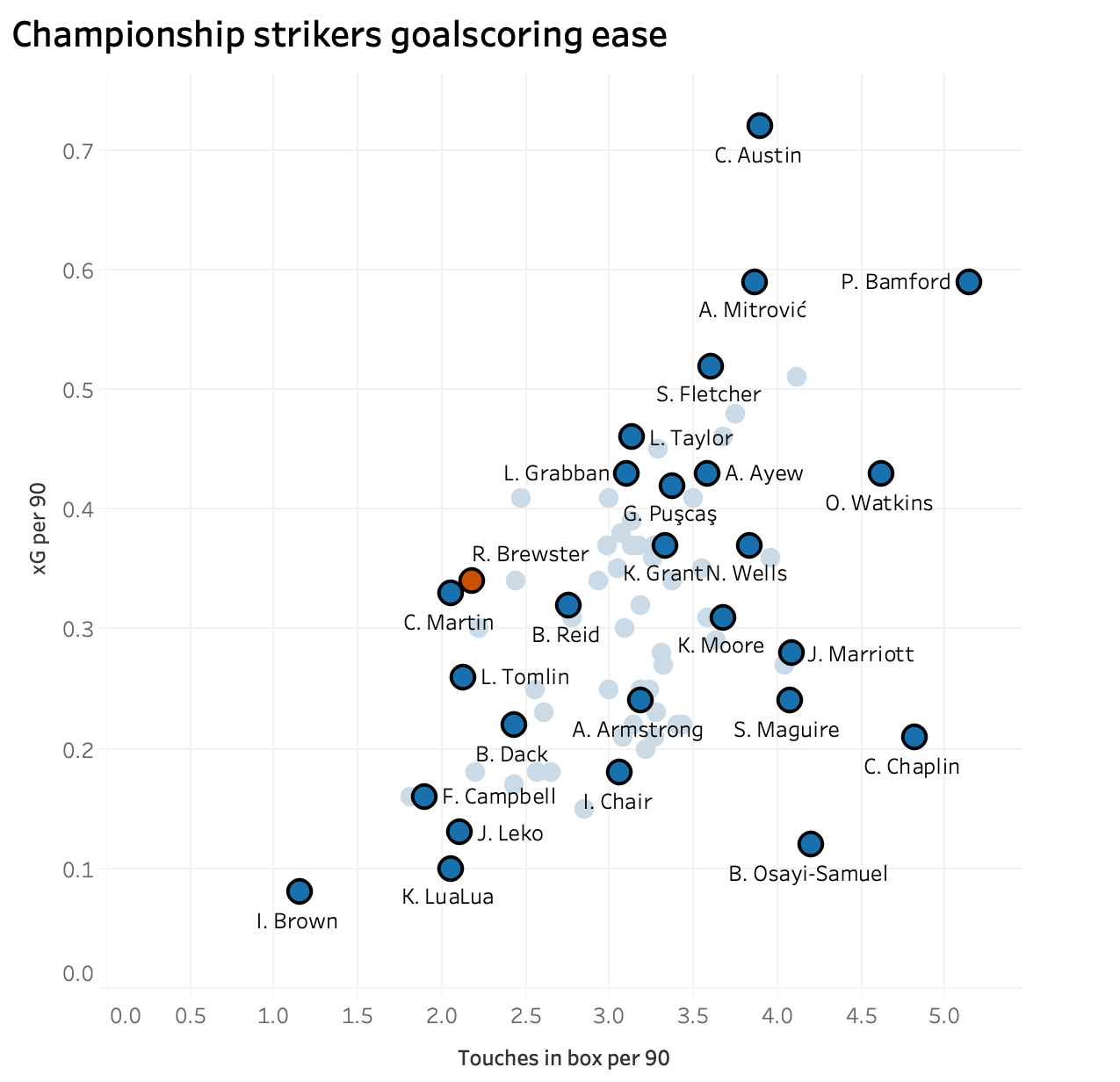 Considering these two scatterplots together in context, Brewster’s high goalscoring efficiency is all the more surprising considering his lack of touches inside the box. If a team was able to progress the ball into high attacking areas without the need for Brewster to drop back and assist in the buildup, it’s highly likely Brewster’s goalscoring rate and xG per 90 would both increase.

Rhian Brewster is an enthusing English prospect. His overall ability in defence and buildup, along with his outstanding finishing, would benefit a number of clubs at various levels. With the shortened summer break (albeit the postponements of the European Championship, Copa America, and Summer Olympics help relieve that setback), clubs will have a limited preseason, though an extended summer transfer window. This would be a considerable reason for Klopp to either hold onto him as a substitute for the upcoming season (and instead sell Divock Origi) or to loan him back to Swansea, where Brewster’s familiarity with a number of players and managers has already blossomed. Brewster could also request a larger role at another club entirely, potentially at another Premier League club. Should the young striker ultimately opt to return to the Championship, this tactical analysis shows he would have no problem continuing his goalscoring prowess in the league.