Hull and Swansea met in a mid-table clash in the Championship with Swansea having set their sights on the playoffs. With Hull expecting a number of injuries to return, there was optimism that Hull could turn around their poor run of form to overcome Swansea.

This tactical analysis will assess the tactics used from both sides who are struggling for form. It will focus on the defensive positioning and set pieces that were so key in this match. Having one of the poorest scoring records in the league, Swansea were focused on being more clinical in front of goal whilst Hull were seeking to claim their first win since New Year’s Day. Neither side registered a goal on target in their last outing and few would have predicted them sharing the spoils from an eight-goal thriller. 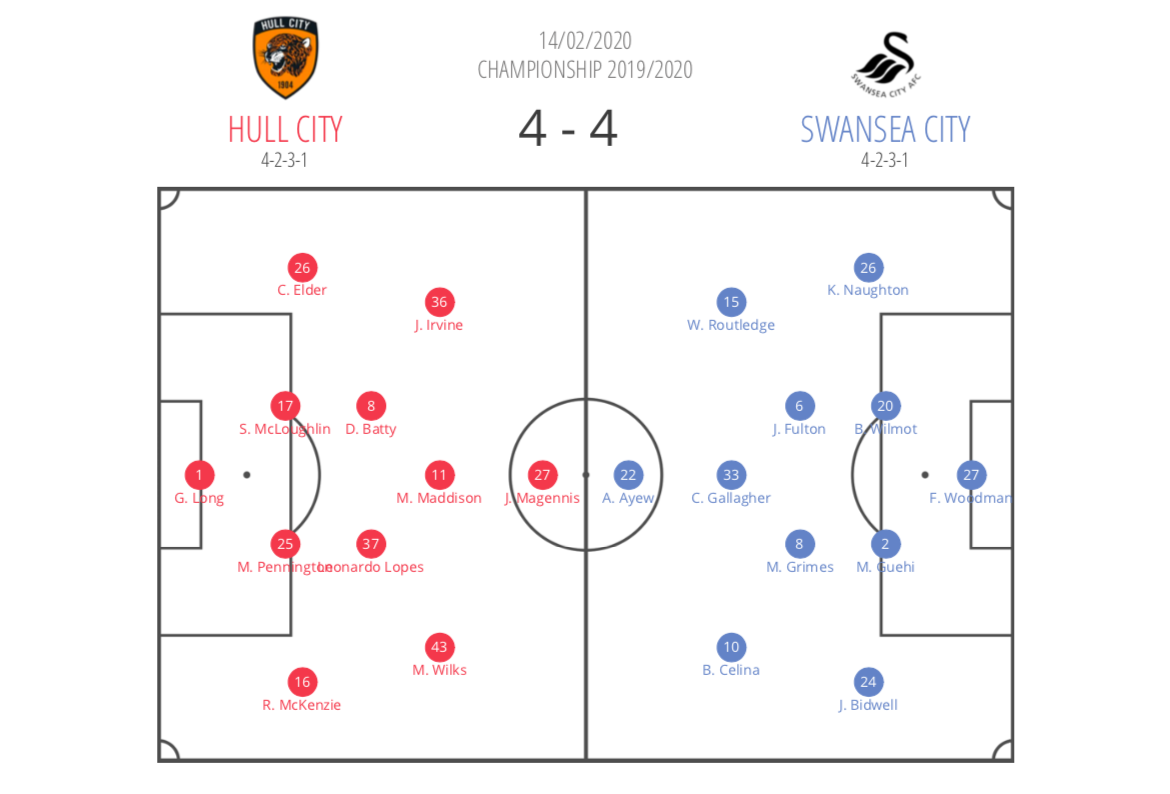 Swansea made four changes following their goalless draw against QPR in the midweek. Notably, Rhian Brewster made way for Andre Ayew to lead the forward line with Routledge stepping back into the familiar attacking midfield role. With 90 minutes under Brewster’s belt in the midweek, Steve Cooper elected to rest him from the starting eleven.

Hull are in the midst of an injury crisis with nine players still away from the first-team squad. There will be hope that they can reverse their poor run of form with players getting closer to full fitness. They made one change with Mckenzie stepping into the midfield after Honeyman was dropped to the bench.

Hull quick out of the blocks

It was clear from the off that Hull were going to play positive football. Hull exploited the width using both Wilks and Irvine with good supporting runs from the midfield. For a team that had failed to win in their last six matches, they made a confident start. 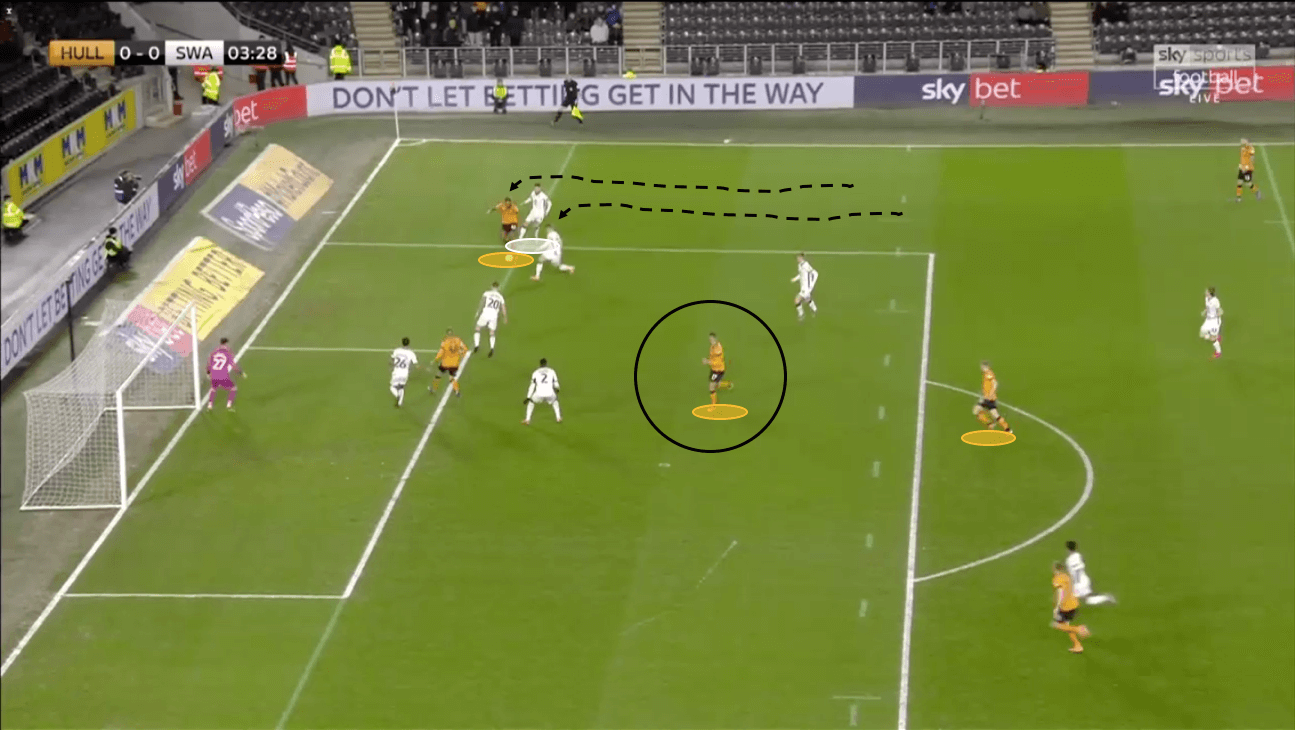 Wilks made a good run in the fourth minute where he beat Bidwell around the outside with a dangerous run into the box. The two runners from midfield were unmarked and in space. From this position, Wilks should have dragged the ball backwards for a shot on goal. In this instance, he elected to shoot into the side netting. More composure from this position would have yielded a goal within the opening exchanges.

Swansea allowed Hull to dominate possession in the early exchanges as they granted them time on the ball. Cooper changed the defensive tactics after Hull went ahead to ensure that they were pressed higher up the field. By applying more pressure on the ball, it was more difficult for Hull to build up meaningful possession. 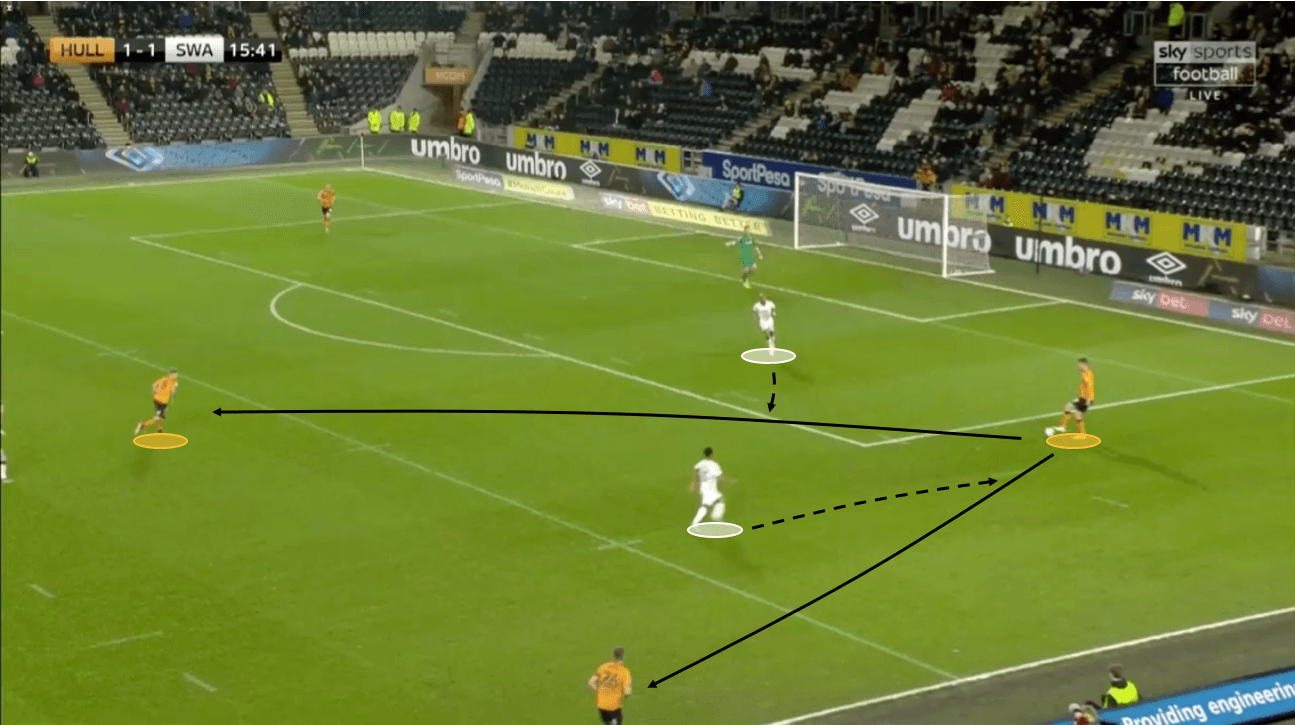 Ayew and Routledge cut the passing channels when the ball was played out from the back to win back possession. Routledge pressurised the man and cut out the passing channel whilst forcing Elder onto his left foot away from the support of the goalkeeper. The change in tactics was the catalyst for Swansea to get back into the game. From the analysis, Swansea were then able to dominate possession, achieving 61% overall. At times, the 4-2-3-1 more closely resembled a 4-3-3 with the wide players playing higher up the field to support Ayew. This was most noticeable during the defensive phases with a press high up the field.

Grant McCann was disappointed with Hull’s defensive performance after Swansea exploited errors in the defensive line. Having conceded four goals at home, confidence will be low at a time when the offensive line has looked strong. 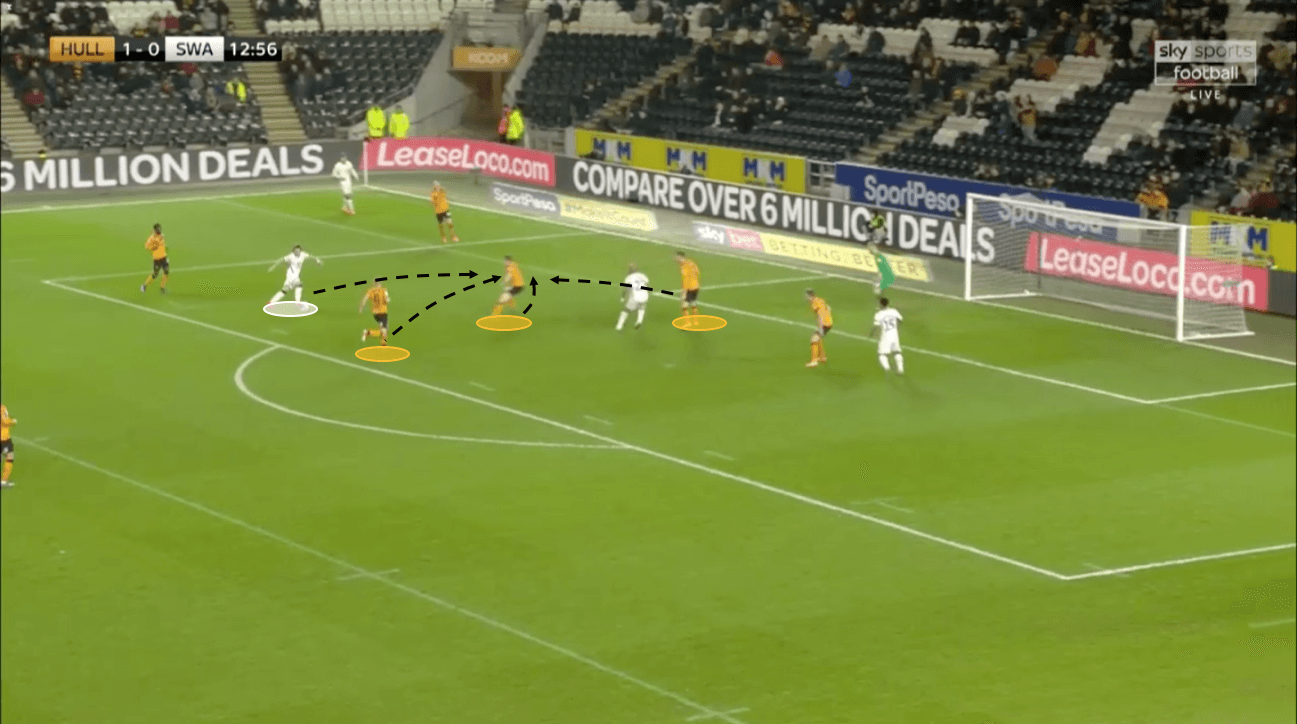 The first Swansea goal came from a good pass into Gallagher that bypassed the Hull midfield. With two players between the lines and two attackers on the defensive line, Swansea were able to commit defenders to force an overlap in the box. The ease at which they achieved this will be the source of frustration for McCann. As the runner enters the box, three defenders close the ball creating an overlap for Routledge to exploit. Ayew’s movement commits the last remaining defender leaving Routledge free for the drag back. 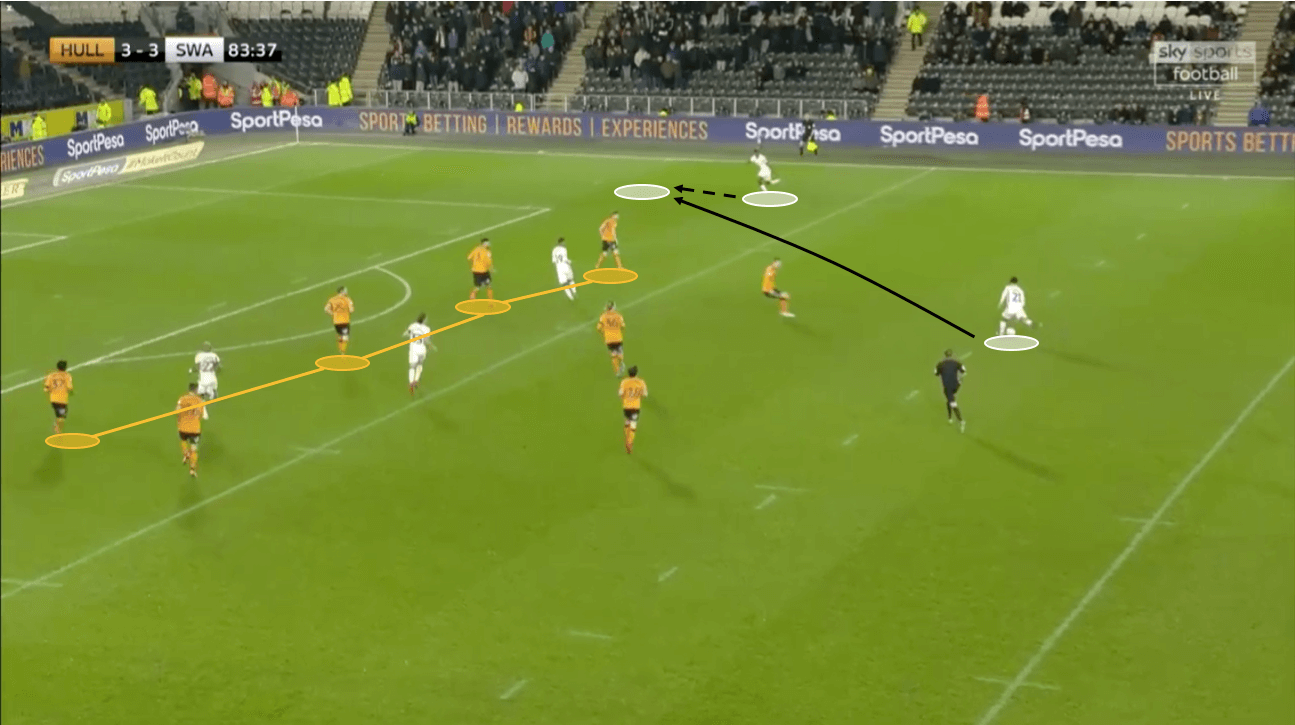 On the offence, Swansea committed three forwards to the defensive line which fixed the back four in a central area. Greater discipline to shift to the left flank would apply greater pressure to the winger from a wide area. As the ball is played from the half-space, the nearside wide-area ought to have been better covered to limit exposure from that area. In the above example, the ball is played in and unchallenged due to the proximity of the full-back. The ball is played into the box and is confidently finished by Rhian Brewster – Liverpool will be pleased to see Brewster performing with such confidence.

Swansea’s creativity from the corner

Swansea demonstrated creativity from the corner with a number of routines that were dangerous in front of goal. Compared with the tactics of floating dangerous balls into the box, they created more creative chances with a greater expectation of scoring. 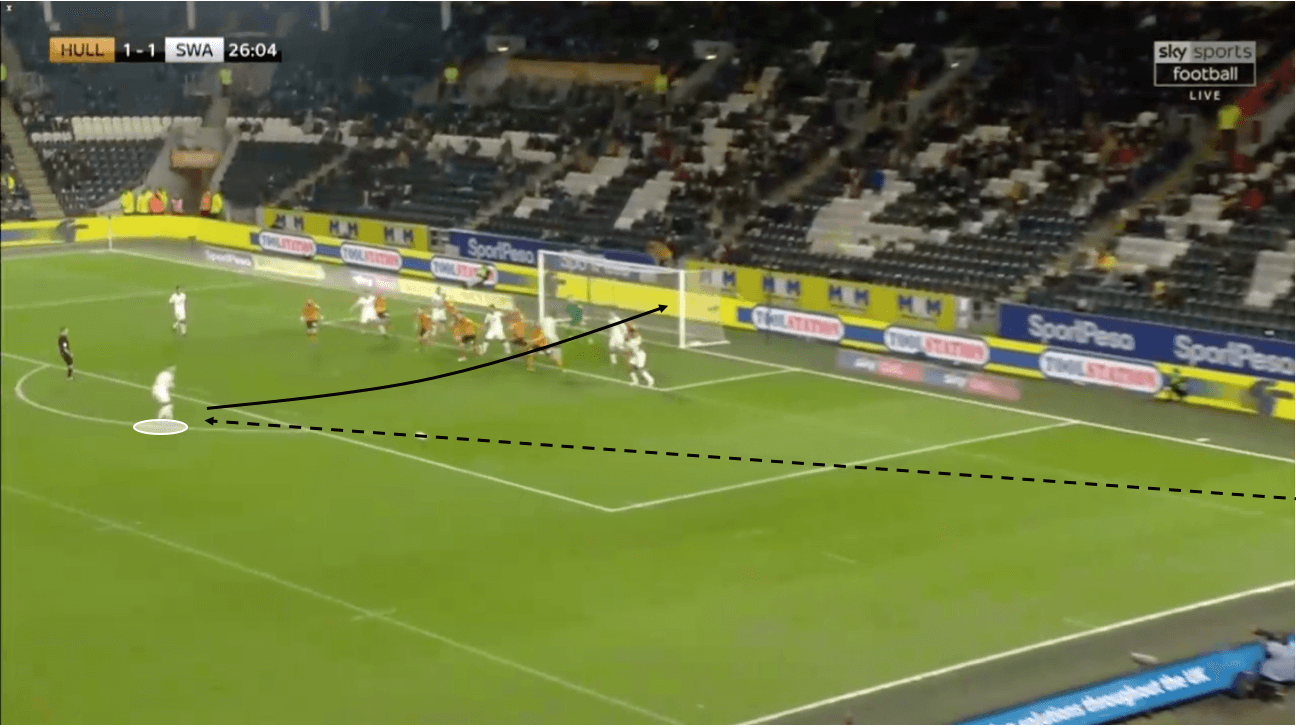 The runner from midfield is brought into the offence with a drag back to the edge of the box. It is an uncontested shot that had an xG rating of 0.3. Hull were not proactive in closing the spaces and focused on the zonal defence within the six-yard box. 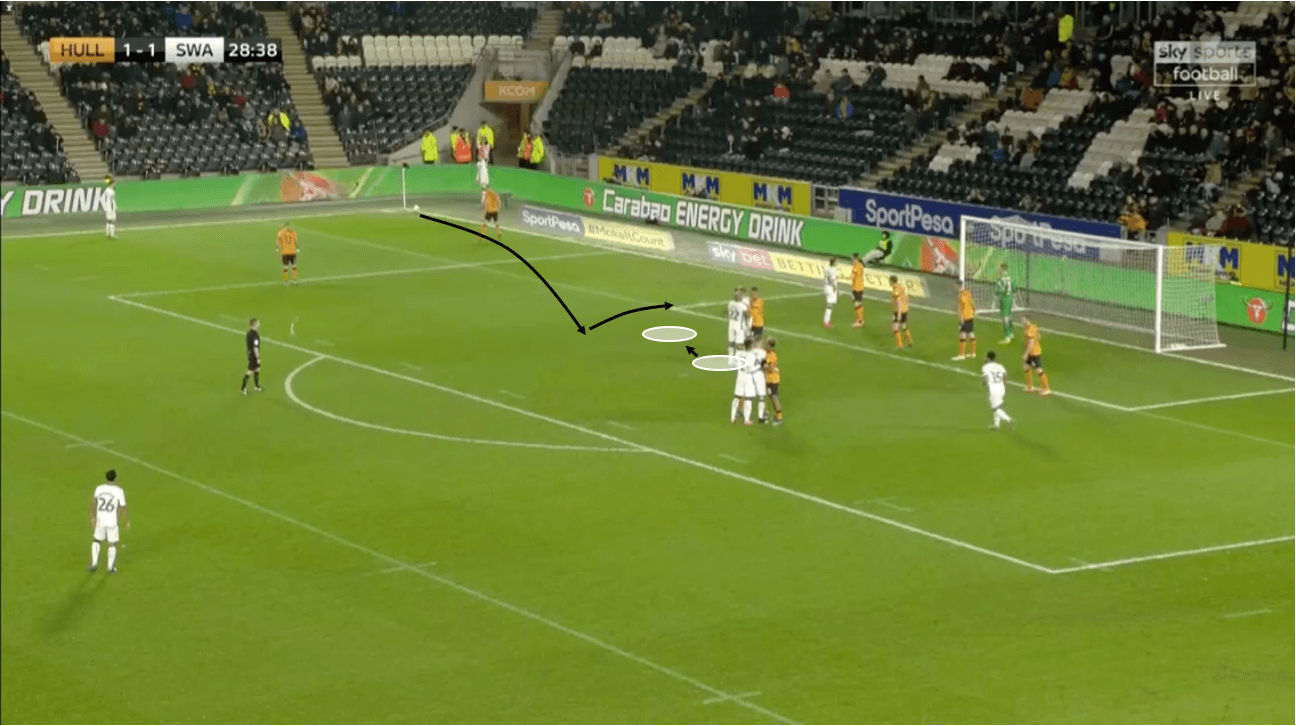 The corner is played into a dangerous area and bounces into an area where Ayew is first to it. He peels away from the defender and aims to hit the ball on the half volley. Although not as dangerous as the first example cited, it is a good opportunity that demonstrates the creativity of their tactics from set-pieces. 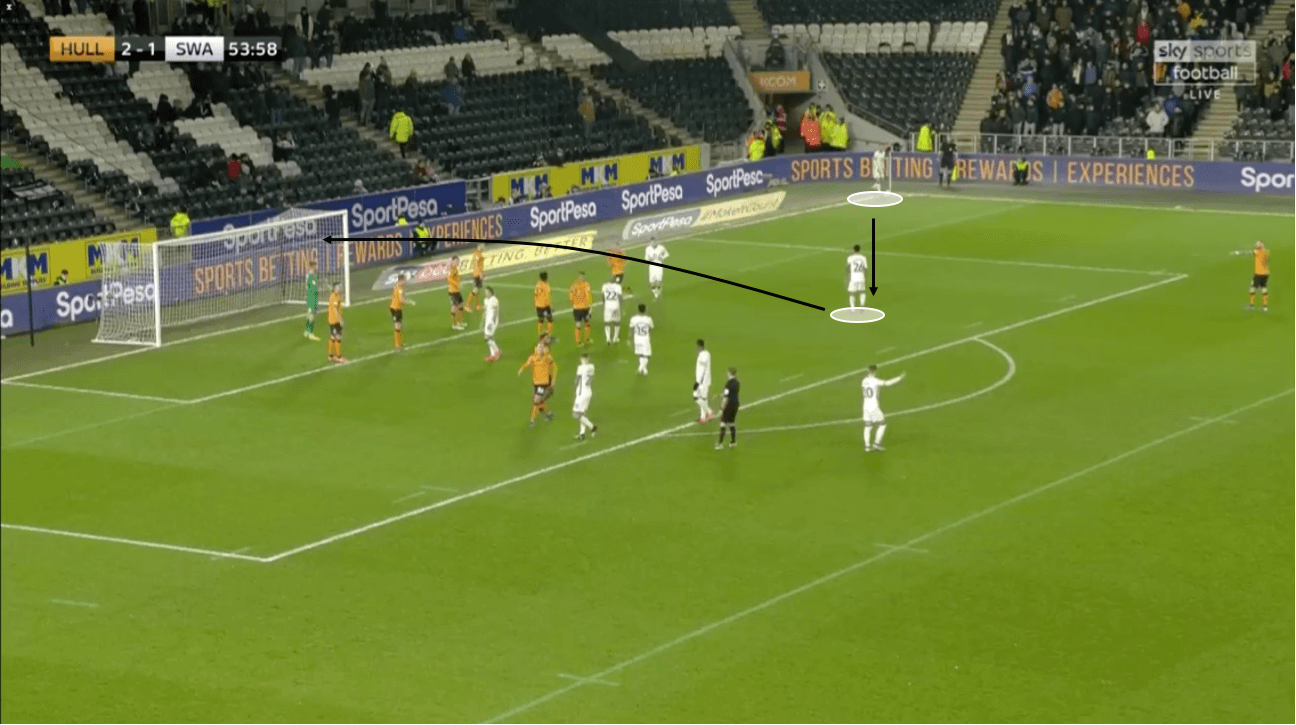 Swansea score from a corner which is played short to Routledge inside the box. Hull fail to pick up the player with a quick ball coming into the box whilst players have got their backs turned. This opportunistic strike is a result of Hull’s poor discipline from a defensive set-piece. Swansea’s tactics from set-pieces were exceptional and were an example of intelligent play that contributed to their success in front of goal.

This tactical analysis concludes that both Swansea and Hull were defensively poor in this eight-goal thriller with both teams outscoring the xG data. Their tactics were offensive from the outset but lacked overall quality in the defensive third.

Analysis of Swansea’s tactics in the final third showed them to be quite impressive. They outperformed Hull in this area but were unable to take all three points despite going ahead late on. From the analysis of their creativity at set-pieces, Swansea demonstrated that they could create quality chances. Their poor goal scoring form appears to have come to an end with Routledge and Brewster now contributing to the tally. A draw against Hull will be viewed as a missed opportunity for a team with their sights firmly set on promotion from the Championship.