Leeds United returned to Elland Road and welcomed Bristol City as their opponents. Marcelo Bielsa’s team had given away their top position of the table and dropped to the second. They finally obtained the second home league win in the new calendar year, a boost for the direct promotion to the Premier League.

Lee Johnson’s Bristol enjoyed a strong run in the EFL Championship recently, they had five wins in the last six. However, their performance in this match was below par, they were no way near to Leeds.

In this tactical analysis, we will show you how Leeds beat Bristol. It is an analysis that focuses on tactics.

Bielsa played the exact same team despite obtained a point at Griffin Park, playing in a 4-1-4-1 formation. Liam Cooper and Ben White formed the centre of the defence, they had Kalvin Phillips in front of them. Despite not scoring recently, Patrick Bamford still played as the only striker of Leeds’ side on the pitch.

Johnson’s team played in a 4-4-2 formation, they made a few changes compared to the last game. For the defence, Nathan Baker partnered with Ashley Williams instead of Leicester City loanee Filip Benković; Tomas Kalas played as a right-back, starting ahead of Jack Hunt. At the midfield, Korey Smith missed the game, Han-Noah Massengo started the game; the two strikers were Nahki Wells and Andreas Weimann, Famara Diédhiou was left on the bench.

Leeds played in their own style, using their build-up to create attacks and access the final third. Given the previous matches exposed the flaws of their build-ups, Bielsa amended his tactics to play out from the back a bit. Since he possessed a clever sole pivot, Phillips, his team had the flexibility to change the details of the attack.

The biggest element: linkage between the centre-backs (Cooper & White) and the sole pivot (Phillips) remained unchanged. These three players created a three v two numerical advantage against the front two of Bristol, as reflected through their passing triangle in the below image.

Phillips stayed slightly higher behind the two strikers of Bristol, reducing the times he dropped between the centre-backs. This gave Leeds to play out from the back through two layers; also, the centre-backs had more time to keep the ball, as one of the strikers was pinned by Phillips, the other was unable to cover both players at the same time. 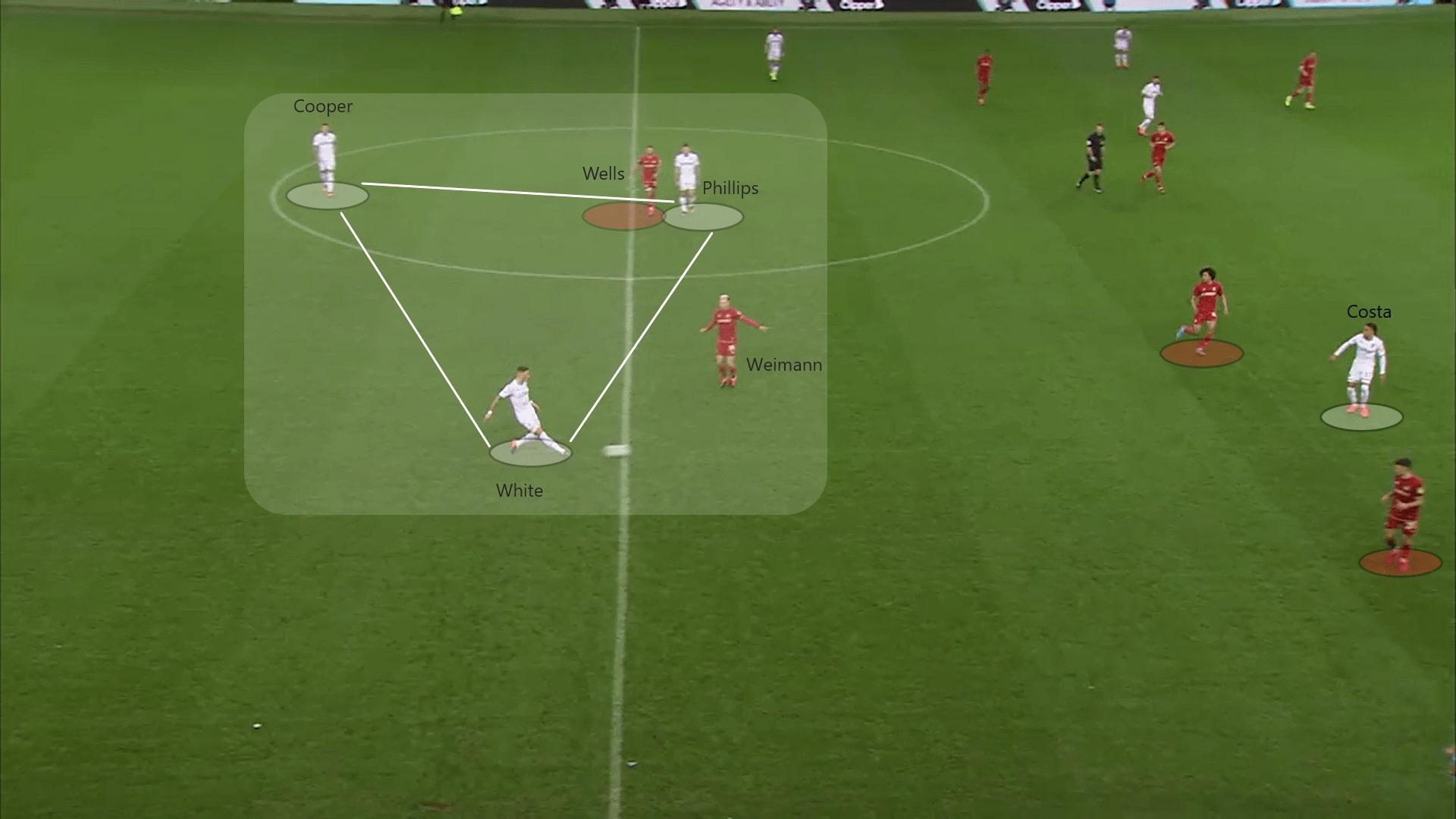 As mentioned in our previous analysis, the build-up plays of Leeds lacked vertical penetrations, hence they were forced wide when the build-up players being pressed. However, this was not an issue against Bristol, as Bielsa released both advanced midfielders to move freely on the pitch.

As a result, even Phillips left his original position, Leeds still had players to fill the central position. Also, when the ball was played to the full-backs, they had options back to the centre, need not play long.

Below was an example to show how the advanced midfielders did a great job to help Leeds progress the ball. Initially, Mateusz Klich dropped and returned the ball to Stuart Dallas; then, he quickly moved upfield, brought Markus Henriksen with him. This forward movement opened the passing lane for another advanced midfielder: Pablo Hernández.

Since Wells thought Dallas would play the ball back to Cooper, he took a step forward. Eventually,  Hernández enjoyed spaces and time to receive the ball comfortably; Leeds were able to penetrate and progress through the centre. 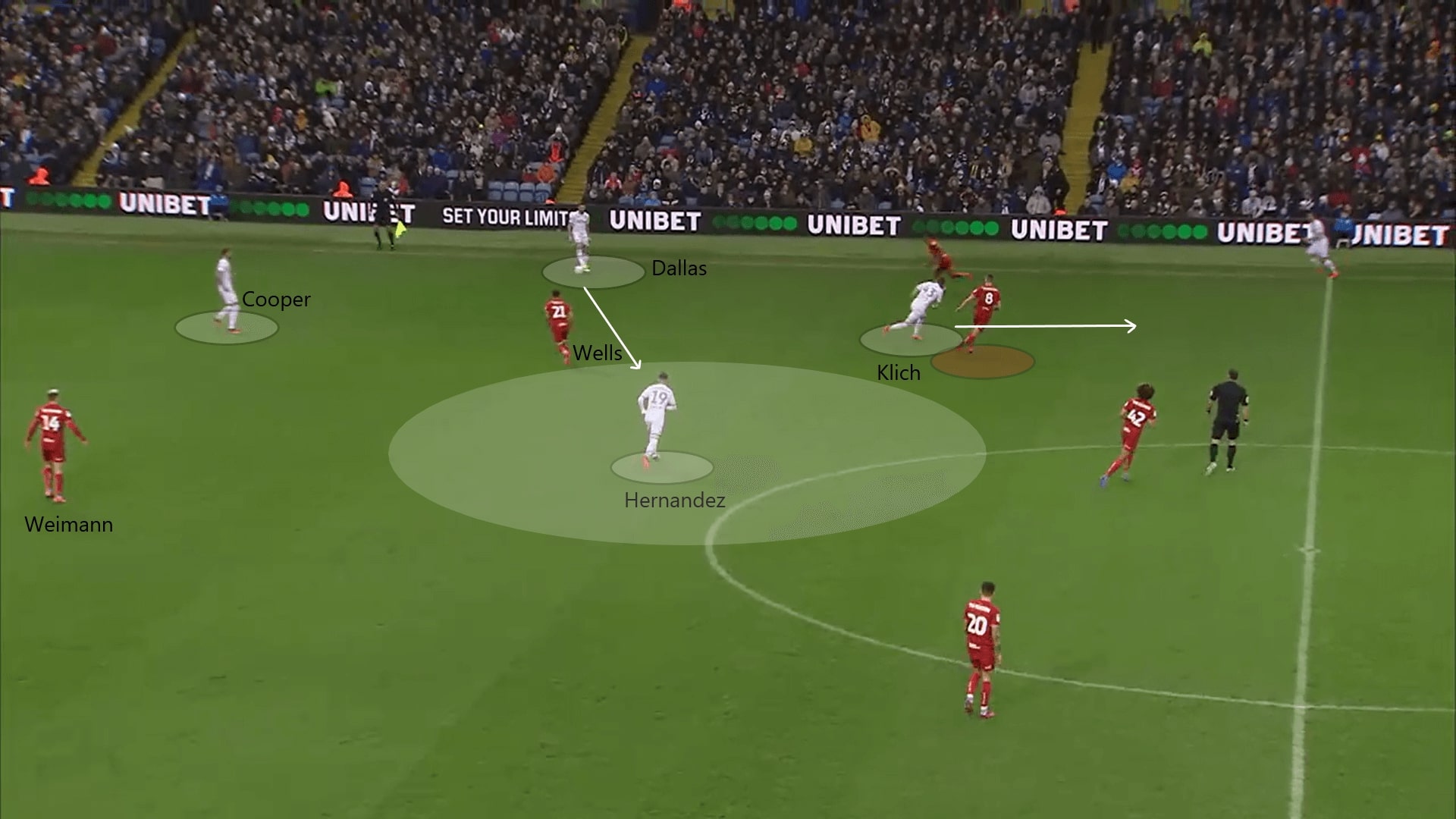 Hélder Costa’s presence was vital to Leeds’ attack in the final third. As mentioned, Bielsa released his advanced midfielders, hence, they roamed their positions with other players. A reoccurring pattern was the positional switch of Hernández and Costa. When the former Valencia man stayed wide to provide the width, Costa could move to the half-spaces.

The Portuguese became an outlet of the pass from the defenders. He utilized the spaces between the lines, received the ball at the half-spaces on numerous occasions. Since Luke Ayling also enjoyed the freedom to join the attack with an underlapping run or overlapping run, their right-back, right midfielder and right-winger formed a passing triangle on the right flank.

Given to the understandings among these players, they could try many combinations on the right. For example, a simple one-two to reach the byline; or, as demonstrated in this image, Costa made the run to zone 18 and took a defender with him, destructed the defensive shape of Bristol. Hernández tried to create something special, he abandoned a predictable pass to the Portuguese and crossed to find Bamford. 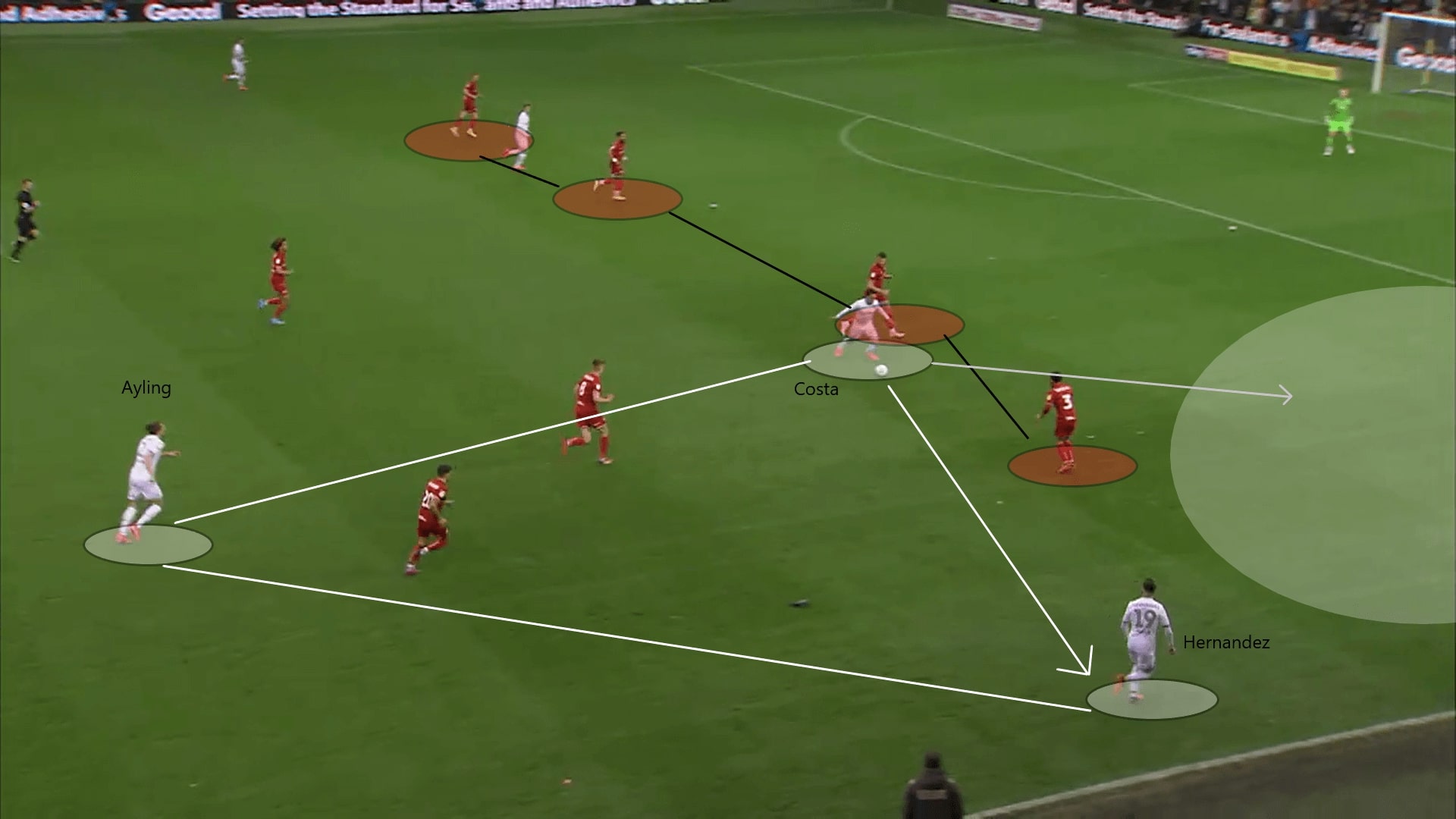 Apart from the attack on the right flank, the left-winger, Jack Harrison also had the support from the advanced midfielders. Furthermore, Leeds could manipulate the positions of the opponents’ midfielders (Henriksen & Massengo) by the positionings of Klich and Hernández.

As reflected in the following image, as both advanced midfielders of Leeds moved to the flank, they formed a passing triangle with Harrison. A greater benefit was they took the midfielders to the wide areas, leaving Costa and Bamford at the centre against two defenders. It was a favourable numerical equality condition when Leeds crossed early. 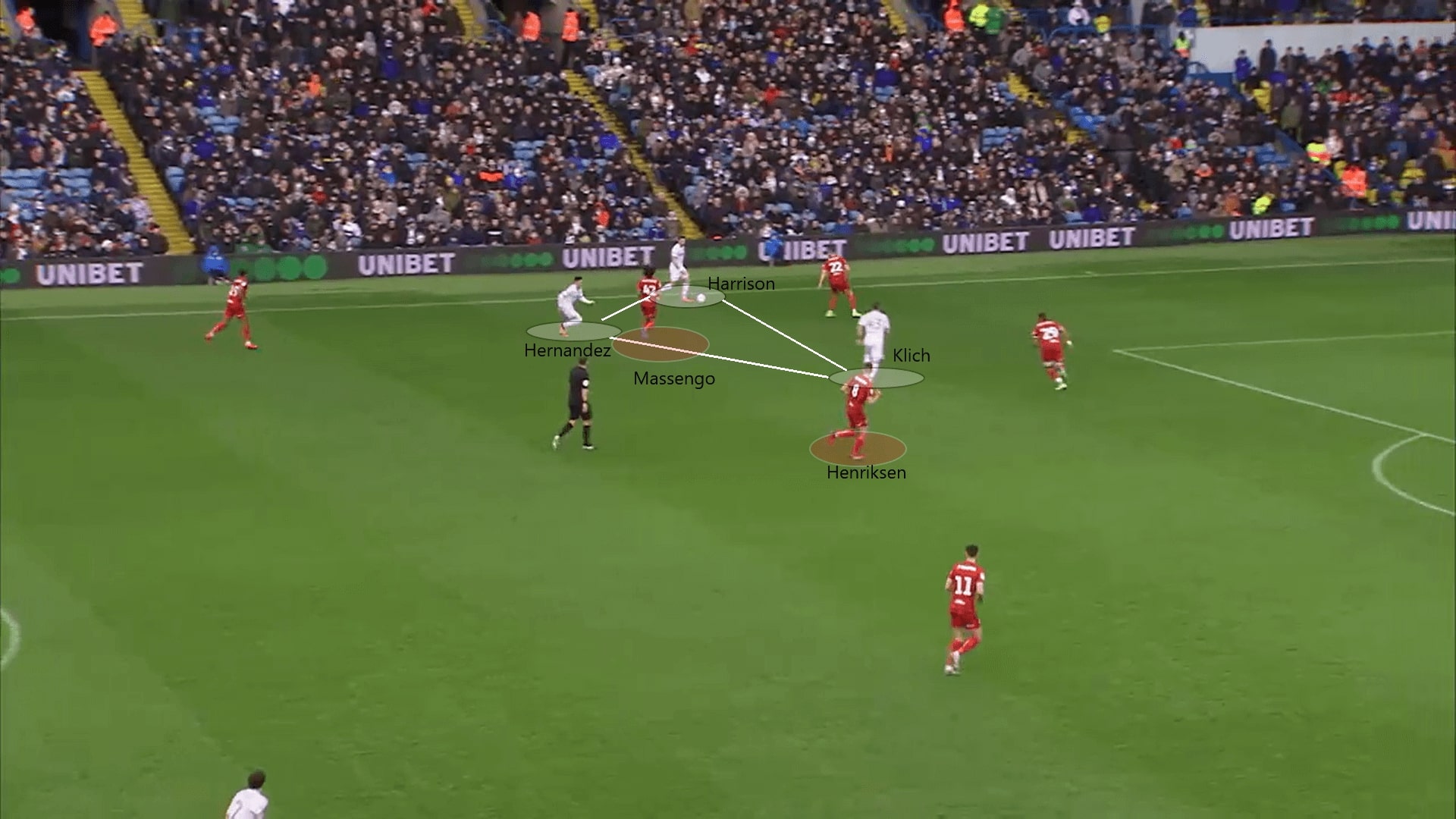 Leeds maintained a low PPDA, 4.84 in this game, it reflected the intensive press of Bielsa’s men. Apart from the counter-press, again, we would like to point out the significance of Phillips to Leeds’ defence. He did a remarkable job in terms of defending the transitions.

Below was the recovery graph of Phillips in this game. He had 15 recoveries in this game, with seven of them occurred in the oppositions’ half. For the positions he won the ball, mostly they were at the central third and the half-spaces, which were vital to stopping the transitions. Except for the recoveries, he also recorded other impressive defensive stats, including 10 interceptions (season average: 3.85); won six of his seven defensive duels, which was 86% of them (season average: 65.4%).

From a tactical point of view, Phillips’ presence in front of the centre-backs was vital, as he protected the exposed defensive line when defending the transitions. Since Bristol kept the strikers, Weimann and Wells at the front line in the counters, Leeds needed an extra man to defend except the centre-backs. In case the full-backs were pushed forward, they still had a three v two numerical superiority at the backline.

The below situation was an example. Since Phillips stayed in front of the centre-backs and challenged Wells in this defensive transitions, Cooper and White could defend another striker (Weimann) of Bristol together. This approach was beneficial to Leeds, as their centre-backs struggled in one v one situations in the previous matches. If it was a two v one, they could cover each other, having a greater chance to win the ball back. 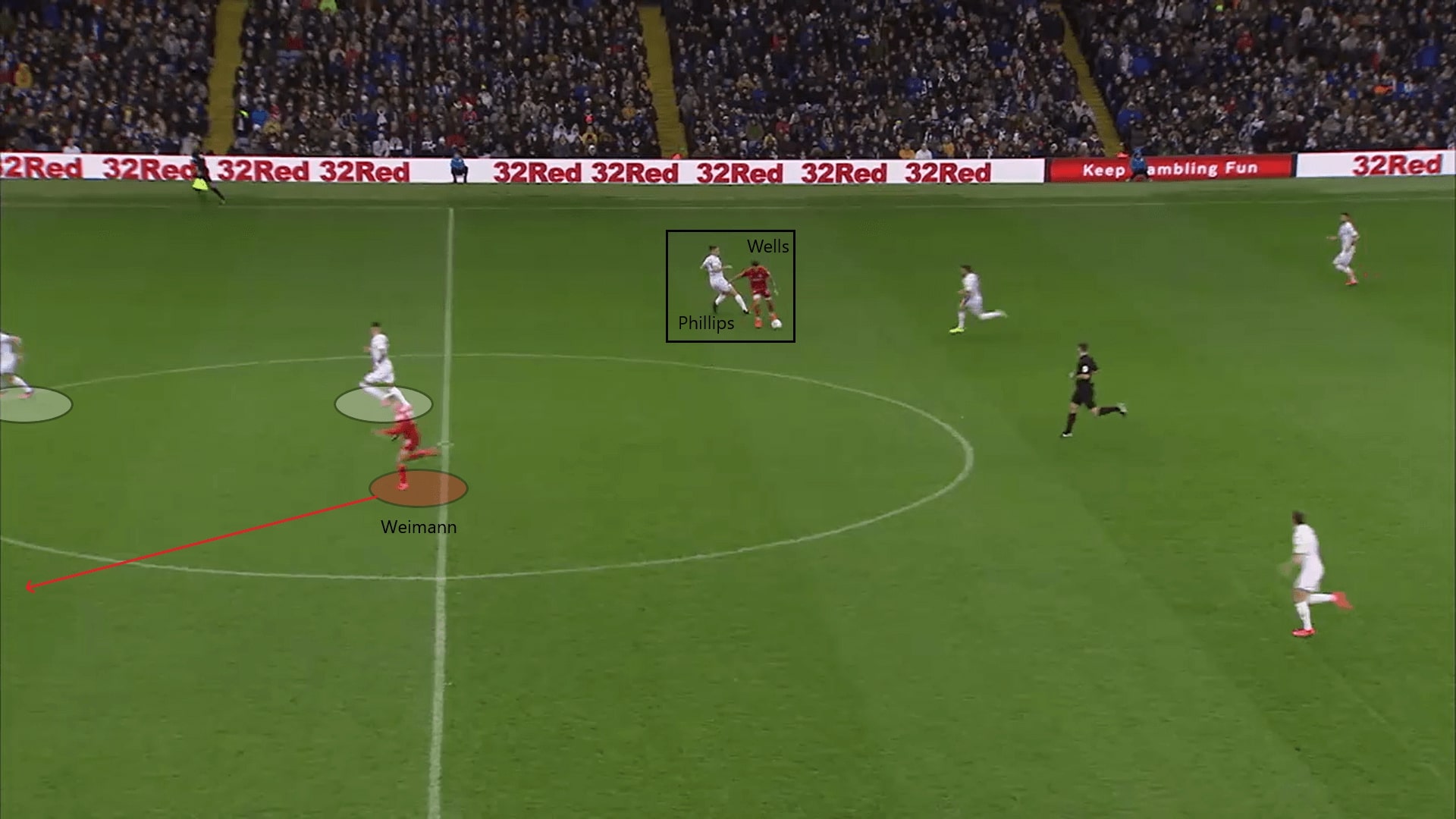 The following image showed Phillips’ good understanding of the game and he made a correct decision when defending the transitions.

When White stepped out and challenged an opposition, he left the defensive line and left spaces behind him. Phillips quickly recognized those spaces and occupied them, also kept Diédhiou under control.

Given the tight marking of White, the redshirt could not turn, also, Diédhiou was unavailable since Phillps’ marking. They delayed the transition of Bristol and won time for Leeds to regroup the defence. 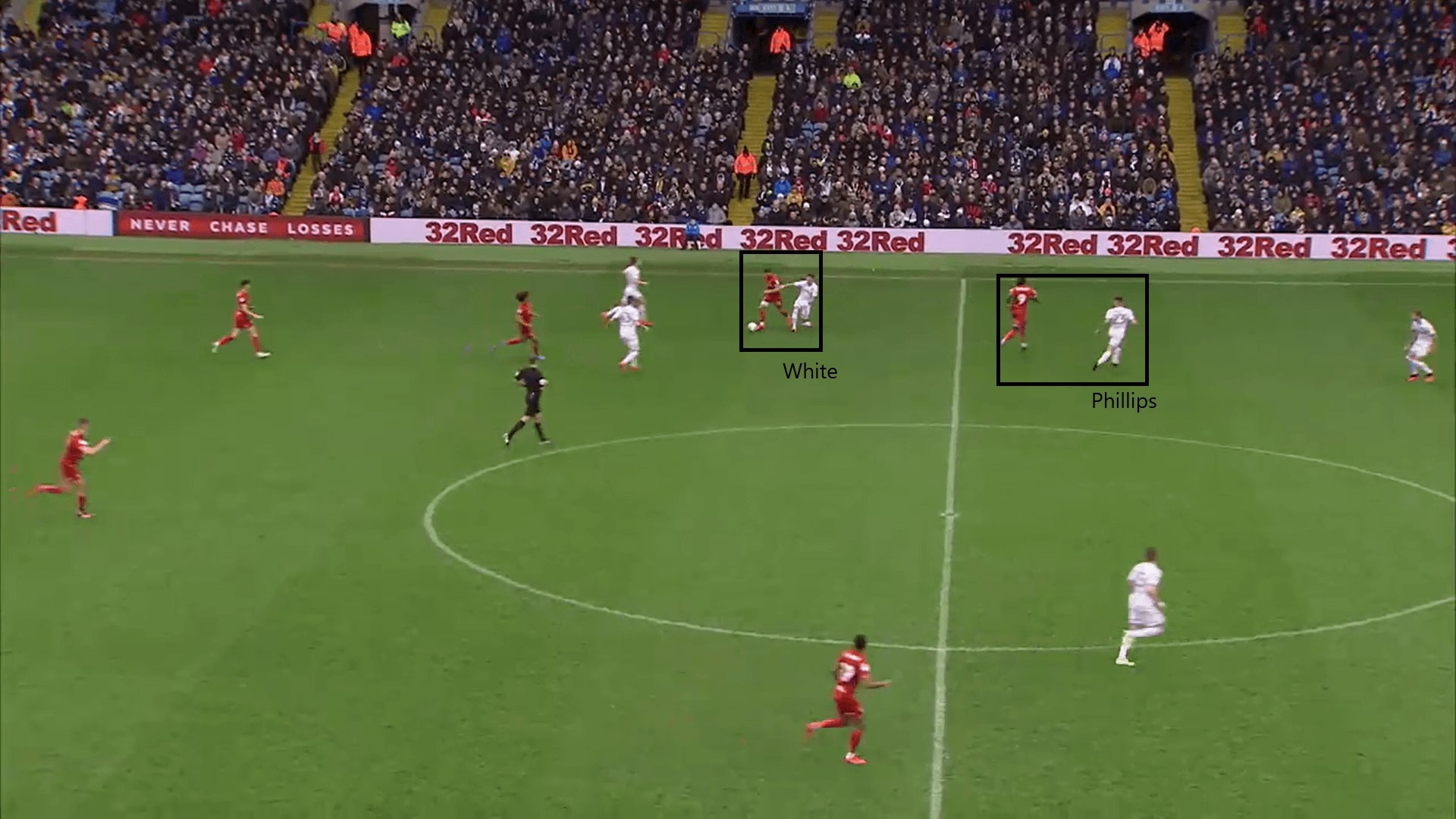 Bristol tightened up the defence

In the first half, Bristol were defending with a midblock, which was a slightly conservative approach as they did not press much. Their 4-4-2 defensive shape had some issues, which Leeds capitalized on them and played out from the back.

A reason for Costa’s strong influence in the first half was because of the lacked compactness of Bristol’s defence. Since Klich dropped to the midfield more often, this movement lured the midfielders of Bristol to follow him. As a result, it generated some spaces between the lines and the defenders did not push forward to maintain compactness. This was how Costa kept receiving the ball in the first half. 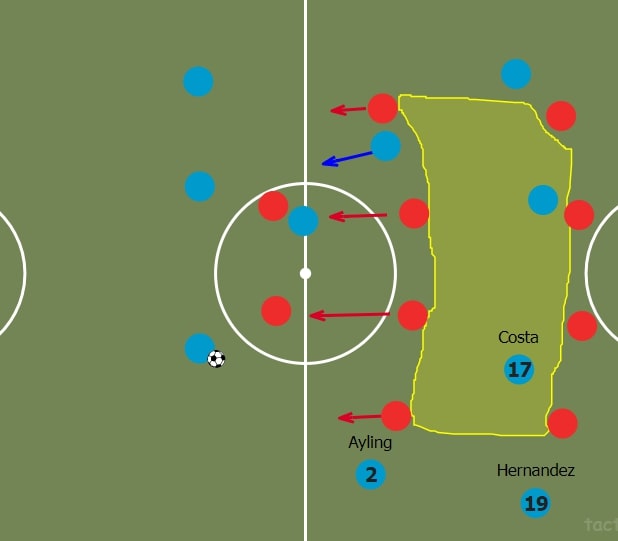 It seemed Johnson slightly adjusted their defensive approach and tried to avoid the issues in the first 45. They switched the defensive shape into a 4-2-2-2, which was demonstrated in the below image.

They stayed closer to the oppositions when defending, with the wingers stepping up early to prevent a pass to the full-backs. The main task of the strikers was to match the centre-backs while covering Phillips. For the two midfielders, they stayed deeper to reduce the gaps between the lines at the centre.

This slightly improved their defence, as, under pressure, Leeds played long, which allowed Bristol to win the ball back in the air. 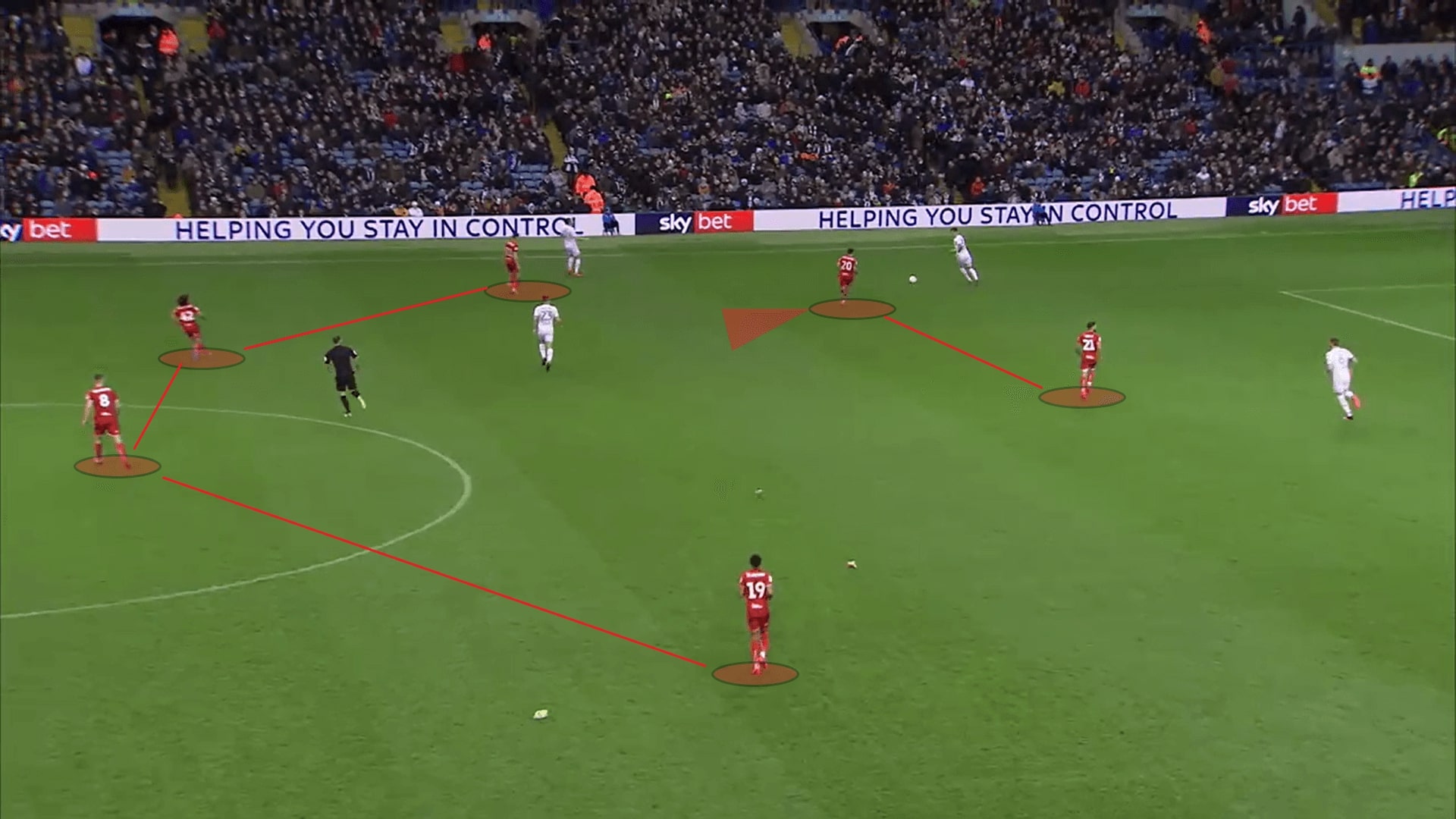 However, this approach could not fully prevent the progress of Leeds’ attack, as the centre-backs of Leeds had the ability to carry the ball forward. The better defender on the ball was White, when the midfielders of Bristol stayed deep, then, the spaces occurred within their block (as reflected in the above image).

Therefore, although Phillips was marked, Leeds could progress with the centre-backs, if the advanced midfielders did not drop deep. In this example, the advanced midfielder of Leeds (Klich) stayed high to pin an opposition. It created rooms for the 22-year-old to carry the ball forward. Costa already identified the spaces behind the left-back, he sprinted forward to exploit those spaces and received White’s pass. 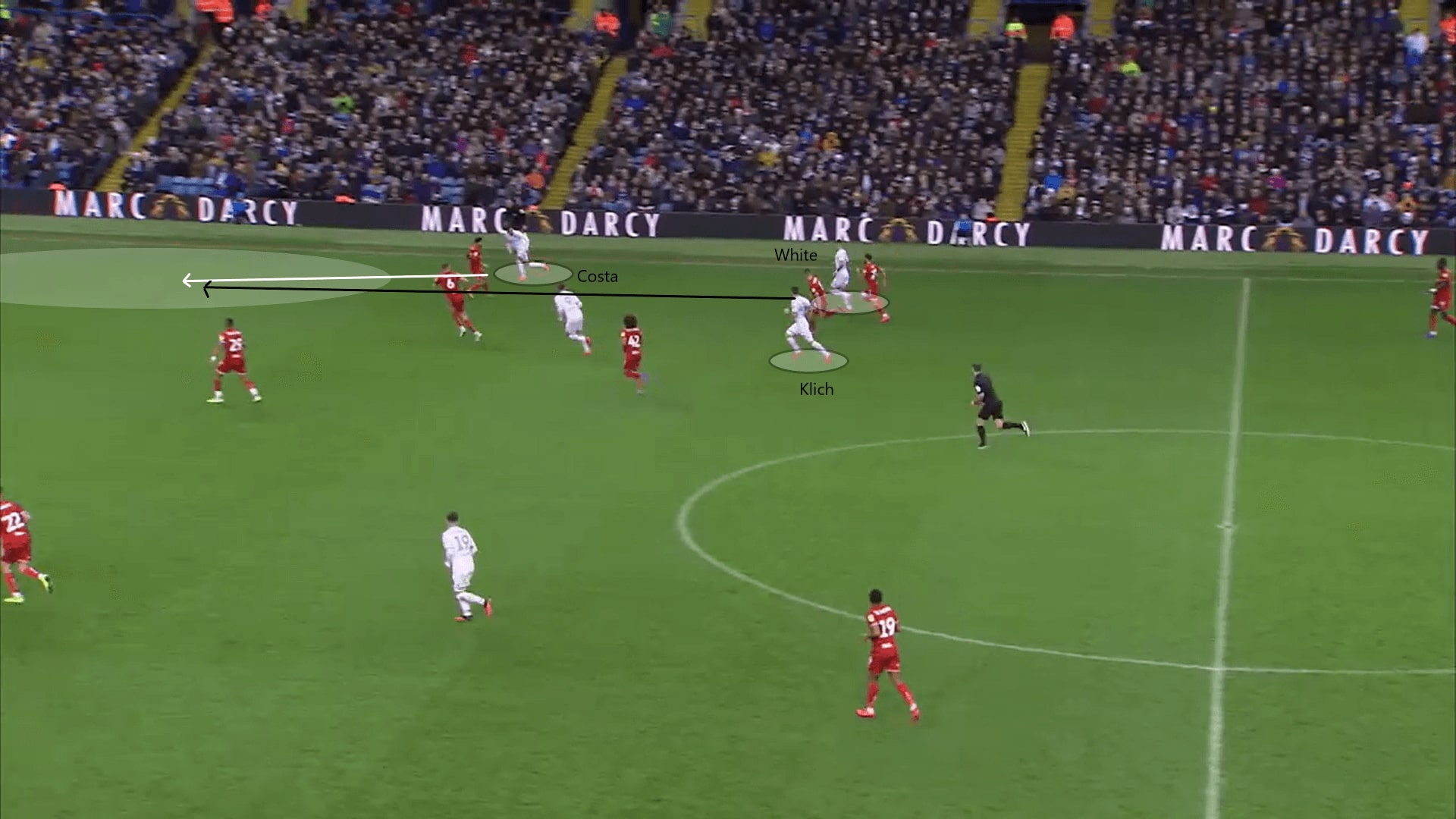 Bielsa was delighted to the win, he said it was a ‘next level’ of Leeds’ performance. Leeds performed well in both ends, individually and collectively, they just need more clinical finishing in front of the goal. The team showed control and dominance of the game, which were good signs for Leeds. They could continue pressuring West Bromwich Albion if they could keep the standard.

For Bristol, it was a disappointing game, as reflected in their xG, they only had 0.19 only. They did not show a clear form of attack which could trouble Leeds’ defence, let alone only recorded a total of three shots in the game. Defensively, they could not disrupt the build-up of Leeds, and, failed to keep Costa and Harrison silence, losing a goal was already a fortunate result for them.