The rate at which a young player develops is difficult to forecast. While some players are ready-made at 18 or 19, it takes others longer to make their mark on the game. At 21, Steve Seddon has stepped into the limelight following his loan move from Birmingham to Portsmouth in January 2020. This scout report will assess the impact he has had on Portsmouth as they aim for promotion and provide analysis on the positivity he brings to the offence as a wing-back.

Portsmouth’s recruitment tactics in January 2019 were much criticised with the club picking up a poor run of form as new loan signings failed to bed into the team. The reliance on loan signings was criticised and one couldn’t help be sceptical when more loan signings were announced just 12 months later. Steve Seddon was signed to provide cover for captain Lee Brown following a lengthy injury. Since signing, Seddon was involved in 8 of the 16 goals Portsmouth scored in January resulting in a nomination for the EFL League One player of the month. Not only has he proved the critics wrong but he’s fast becoming a fans favourite at Fratton Park.

With Kristian Pedersen’s form keeping Seddon out of the starting eleven at Birmingham, he enjoyed loan spells at Stevenage and AFC Wimbledon in 2018/19. With a buzz starting to generate around Seddon, AFC Wimbledon were frustrated not to have captured Seddon for a second spell in January 2020. There is little doubt that Seddon will be a valued senior player in the EFL Championship next season and I would anticipate a hefty price tag if Birmingham aren’t able to employ him in 2020/21.

Steve Seddon has developed to offer greater offensive support as a defensive winger rather than as a full back. His positioning sees him slightly ahead of the defence where he can offer more balanced support to the team. 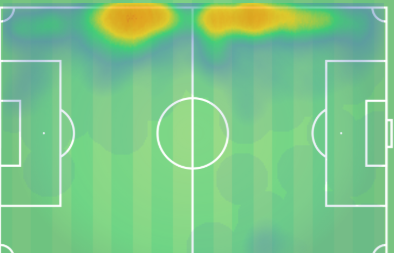 The heatmap shows his positioning in the 2019/20 season so far with a balanced contribution to defensive and offensive duties. Having played as both a winger and full back in his youth, Seddon is comfortable in either position and is best employed in a hybrid role. His change over time can be mirrored in his interception rate. As the number of interceptions have gone down, it is evident that his role has transitioned to incorporate a more offensive role. This is similar to the data collected on Andy Robertson who made a similar transition in the 2017/18 season. 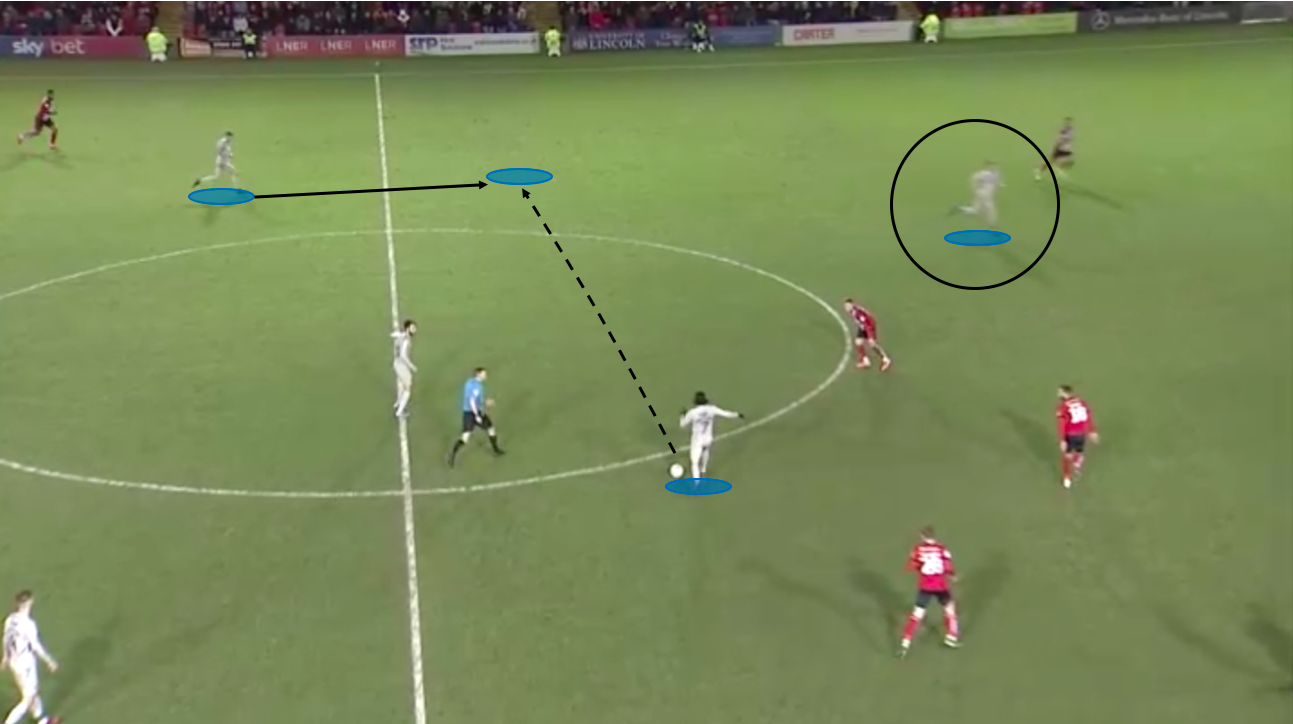 As Portsmouth have gained possession, Seddon is quick to transition to the midfield where he picks the ball up on the left flank. His early movement and quick pace have enabled the space in the wide area. With space in front of him and the ball occupying a wide area, the left winger (circled) can provide another option in the box. In this example, the space opens up into the box with Seddon drawing a penalty to secure the three points against Lincoln

The key to successful loan moves is for clubs to select managers and coaching staff that will draw the best out of their players. Birmingham will be buoyed to see that Portsmouth use Seddon in a similar asymmetric system where play is loaded down one flank over another. Both Ronan Curtis and Steve Seddon are key players for Portsmouth and both feature on the left flank. This makes it the dominant area with more attacks coming down the left than from the right. The result is that Jackett relies on Seddon to have more of a hybrid role than James Bolton who has a more defensive role as a full back on the right flank.

During his spell at AFC Wimbledon, Steve Seddon picked up some set-piece responsibilities and demonstrated the strength of his left boot. Since his arrival at Portsmouth, he has provided another option for Jackett at set-pieces. From analysis, the quality of Seddon’s corners and free-kicks have contributed to the positive run of form with Portsmouth winning their last nine matches in all competitions to set a new club record. Jackett had highlighted that tactics at set-pieces were not quite right with centre-halves failing to contribute to the goal tally in the first half of the season. Since Seddon’s arrival, six goals have been scored by defenders from set-pieces. 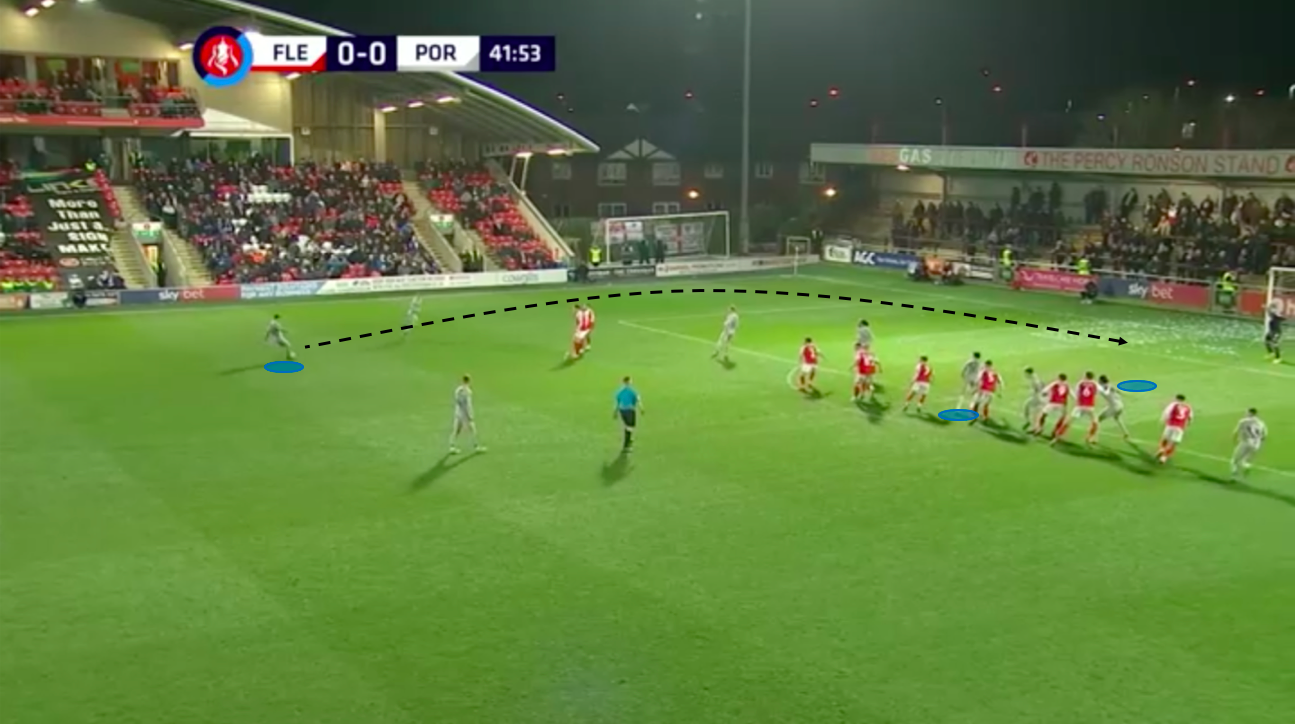 Seddon takes command of an out-swinging free-kick with five options in the box. The ball is whipped low and is struck with pace which limits how Fleetwood can defend against it. There is no option for the defence to get goal side of the ball so any contact is taking the ball closer to the goal. This is typical of Seddon’s free-kicks which are difficult for a defence to deal with. Although he’s only contributed to two assists, his quality deliveries have resulted in goals from the second ball. It is a unique talent to deliver such low deliveries with as much whip as he achieves; the result is chaos in the six-yard box. By using conventional metrics, the analysis doesn’t support his strengths to the offence. Analysis of goals scored from the second ball, shows that Seddon has contributed to eight goals in eight appearances for Portsmouth. 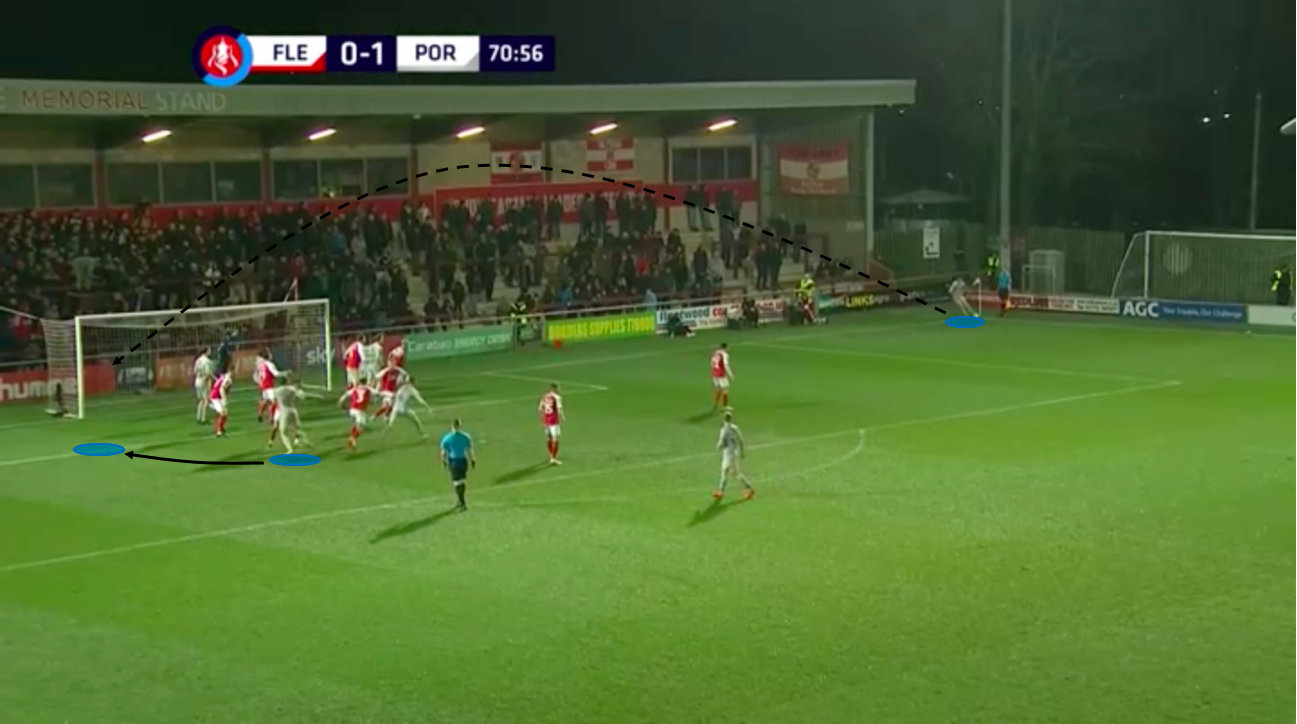 The corner delivery above is an inswinging delivery to the back post that has the right shape and height to avoid the goalkeeper. Burgess wins the header and at the back post and doubles the lead to kill off the game. The quality of the delivery is what makes Steve Seddon exceptional from this area – his performances are reminiscent of Enda Stevens’ time on the south coast. It is Seddon’s support from this area that means he is achieving a career-high 1.4 key passes per game.

Seddon’s creativity on the left flank allows Curtis more freedom to play closer to the centre forward and act more as an inside forward. When playing with Seddon, the analysis shows that Curtis has provided a greater return in front of goal with a 143% increase in goal contributions (goals and assists per game). He has contributed to seven goals in the last six fixtures when playing alongside Seddon. This is partly due to the development that Curtis himself has made but it is also due to the strong support play of the wing-back behind him. 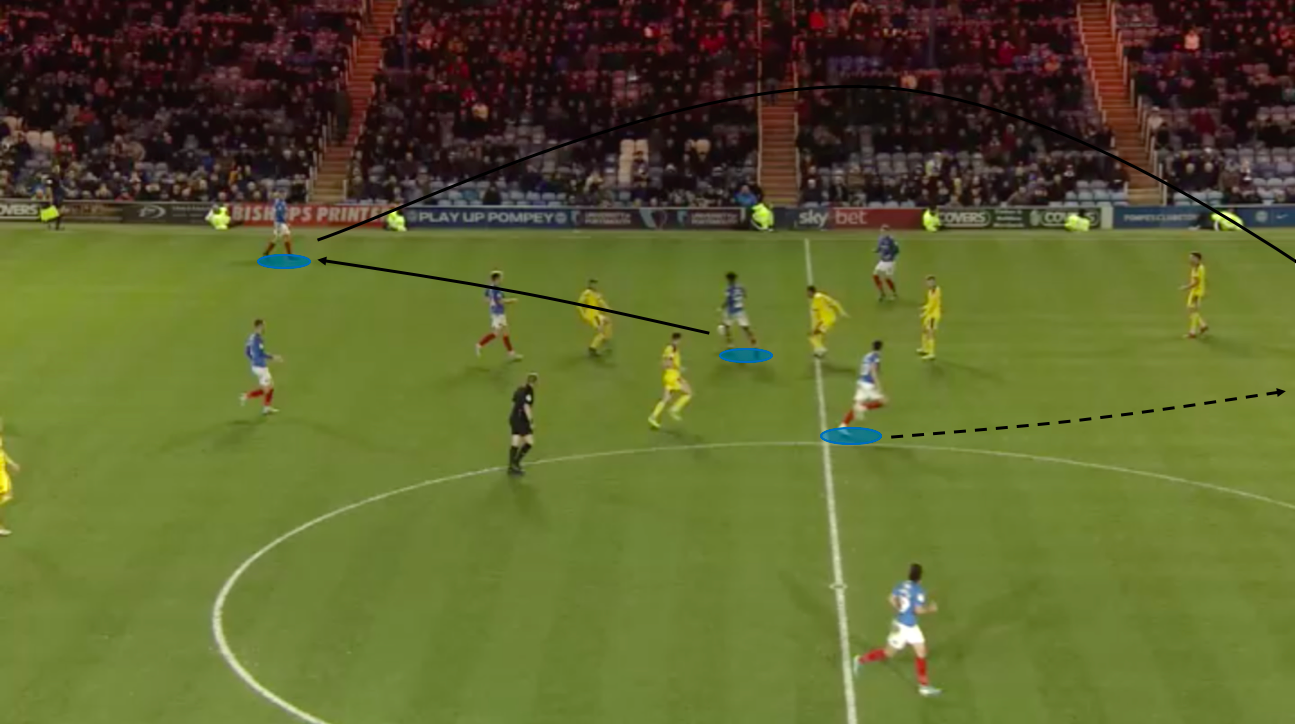 As shown above, Seddon picks the ball up in space on the left flank and is presented with a number of options. Spotting the run from Marquis, Seddon opts to put the ball into space behind the defensive line with pinpoint precision. The intelligence he’s got to read the play and understand his new team’s style of play is exceptional and highlights him as a rare talent. At just 21, he has the head of a player with much more experience. The lone striker and wingers are able to operate as a front three and i this situation should have done better to convert the chance. 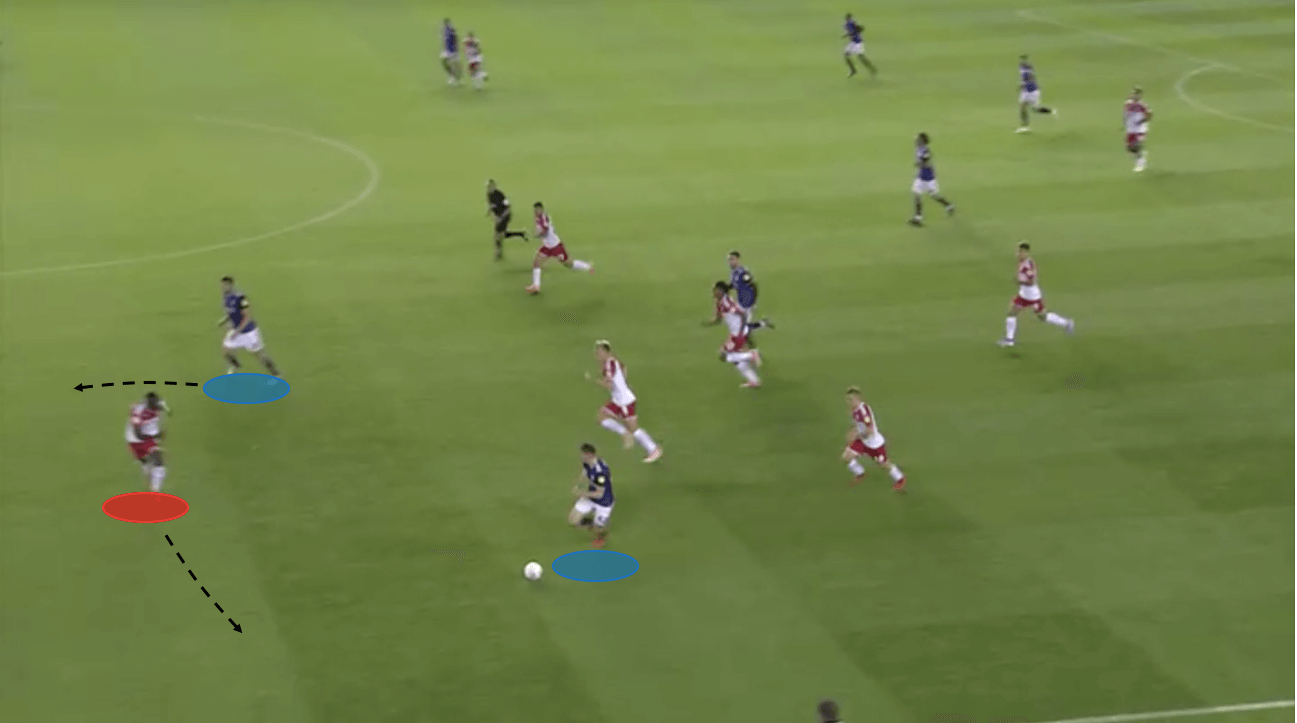 The same trend could be seen within Birmingham’s tactics at the start of the season. On the break, his spatial awareness as a wing-back allows greater freedom to the left winger who has space inside the opposition fullback. Although he hasn’t selected this pass, his physical attributes and intelligence make him a well-rounded hybrid player in this position.

Steve Seddon has been the catalyst for a record-breaking run of form for Portsmouth that is making them a bookie’s favourite for automatic promotion. This tactical analysis concludes that Seddon has developed in the last twelve months and is an exceptional wing-back in EFL League One. Having signed a two-year deal in July 2019, he will be a hot prospect on the transfer market if he can’t find his footing with Birmingham next season.

Seddon’s greatest attributes are his intelligence and his ball-striking that see him deliver consistent support into the box. Although not topping out with assists on a weekly basis, his overall impact to the goal tally through goals scored from the second ball make him a devastating player to play against.