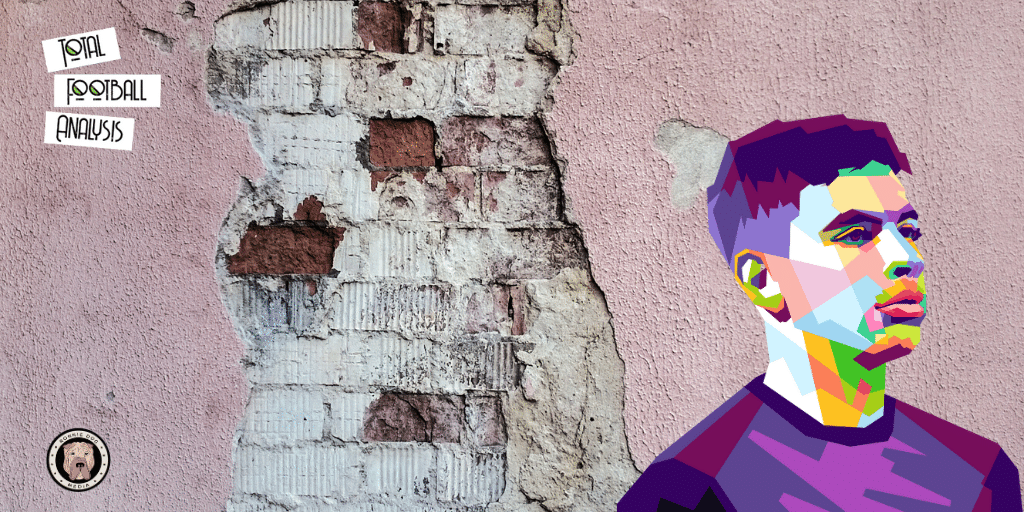 French football has been churning out an incredibly high number of precocious talents in the last few years, and Angers’ Rayan Aït-Nouri is the most recent. The 18-year-old left-back has well and truly taken Ligue 1 by storm this year, and his performances have seen him linked with a whole host of clubs, including French champions Paris Saint-Germain. Unfortunately at the beginning of January he fractured his jaw in a challenge with OGC Nice midfielder Hachim Boudaoui, and is expected to be on the sidelines until the end of March. Nevertheless, his season thus far has turned enough heads where there is likely to be a queue for his signature come the summer transfer window, and had he not suffered his injury we may well have seen him picked up by another club in the January window. This scout report and tactical analysis looks at Aït-Nouri’s tendencies as a left-back, what tactics allow him to play to his full potential, and evaluates his overall strengths and areas for improvement. 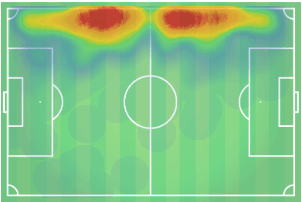 What the statistics say

A glimpse at Aït-Nouri’s statistics for this season show that he is strong in a plethora of areas.

Despite a reputation as an attacking full-back he is good defensively too. He’s been involved with 7.42 defensive duels per game, and wins 64% of these, which is very strong. Even though he is only being 1.79m tall, and of slim build, he is good aerially too, winning 70.4% of his 1.8 aerial duels per game.

He also makes 5.41 interceptions and 2.07 clearances per game.

It is interesting to compare him to other teenagers already plying their trade in Europe’s “top five leagues”. When we do this we can see that Aït-Nouri is unquestionably one of the most talented teenagers in European football right now.

As a defender, he ranks in the top five for total interceptions and the top 10 for defensive duel win percentage.

This report will also go onto speak about his passing ability. He’s averaged a 79.2% pass completion this season, and a 53% completion on his long passes. He is positive with passing choices, with 72% of his 17.2 forward passes per game, hitting their target and 9.69 progressive passes per game.

Finally, it wouldn’t be an overstatement to suggest that Aït-Nouri is already well on his way to becoming one of Europe’s elite crossers.

Across Europe’s top five leagues, and across all ages, Aït-Nouri ranks in the top 30 for cross completion percentage. If we again just look at teenagers, he ranks in the top five for crosses per 90, as well as first overall for total crosses, and cross percentage as the analysis below shows.

An argument against this data is that he has been a regular starter, up until his recent injury, so doesn’t he just play more than others? And that is absolutely true, he does, but ranks 9th for matches played, not in the top five, and of course any statistics over 90 mins show his talent regardless of whether he starts more than other teenagers. Also, there is of course a reason he has been a regular starter despite being just 18.

Aït-Nouri is excellent going forward and at times this season, Angers have let him operate by himself down the left-flank, with the expectation that he will play as an attacking wing-back. The fact that Angers are confident leaving him to be the sole operator on his side of the pitch shows how confident they are in the teenager’s ability.

Angers normally use a 4-1-4-1 formation, having used this in 84% of their games this season. Despite only making three appearances last season and all as a substitute, he has been a regular starter in the Angers team this season making 17 appearances, with all but one coming as a starter. It’s a testament to how consistently he’s performed that Angers have tried so many different players at left-wing, but Aït-Nouri has continued to start. In front of him this season he’s had Casimir Ninga, Pierrick Capelle, Mathias Pereira Lage Antonin Bobichon, and Sada Thioub all occupy the left-wing position.

We can see how high and wide he is with Angers keeper Ludovic Butelle in possession. He stays in this position even when the ball is on the opposite flank, acting as an outlet and stretching the pitch. He is quick enough to tuck back and support his central-defenders in transition too. 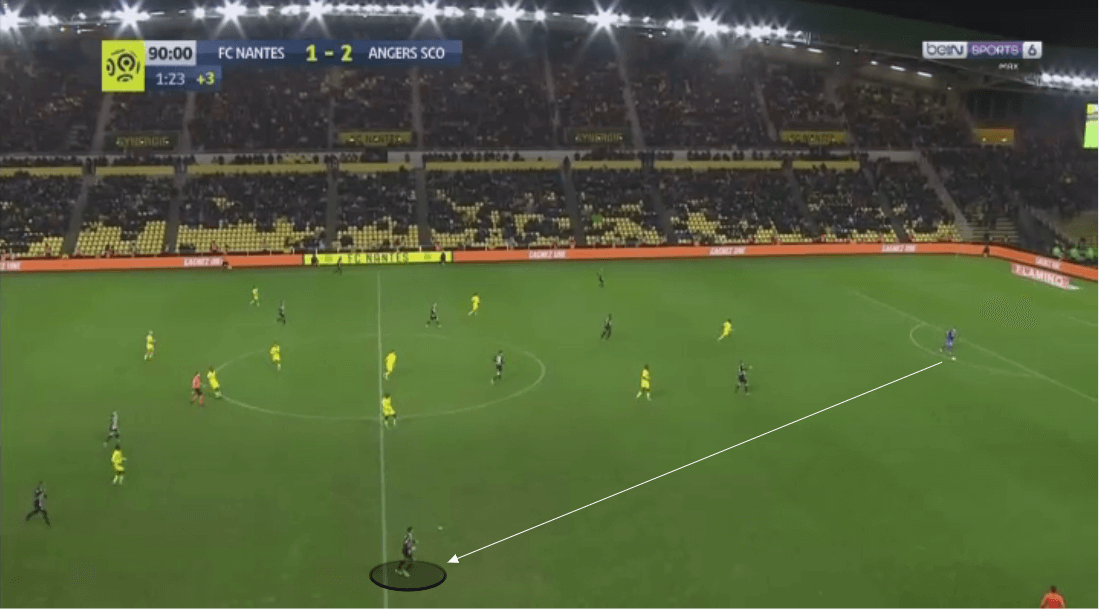 In attack, Aït-Nouri will push forward and get himself into advanced wide areas.

If the left-winger in front of him tucks inside to play in the half-spaces he will push even higher, basically playing as a left-winger as we can see in the image below. 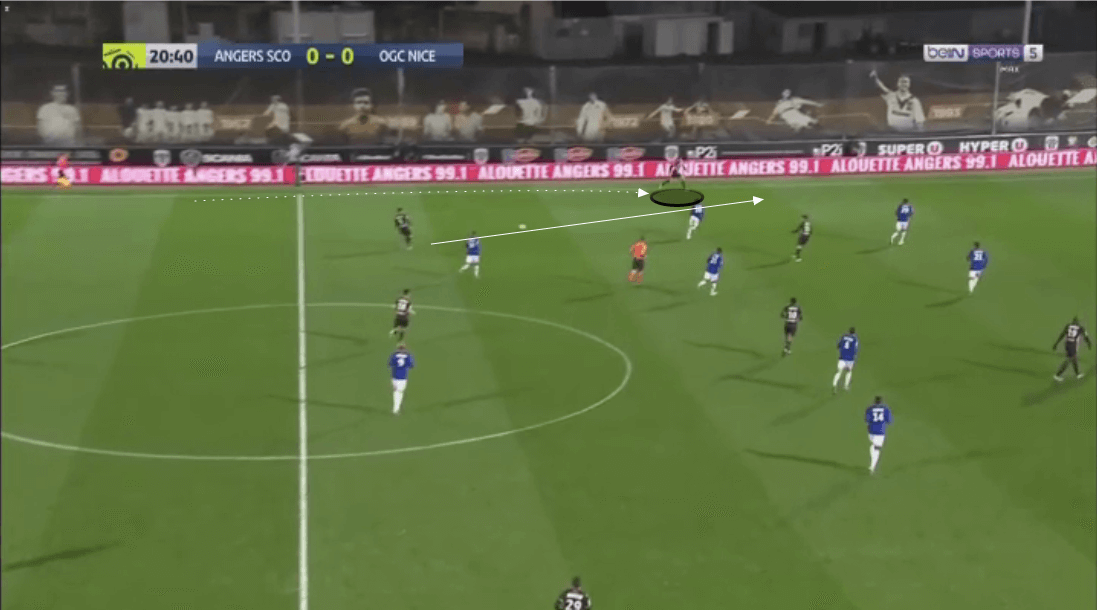 Aït-Nouri has bags of pace and is excellent at getting forward and wide very quickly in transition for Angers. As they look to turn defence into attack, Aït-Nouri will sprint forward and occupy the left-wing. If he receives it, he is confident in possession and will drive the ball forward quickly. The image below shows much space is left on Aït-Nouri’s side, as Anger looks to break forward quickly, Aït-Norui is able to break into the vacant space on the left-flank and receive the pass. 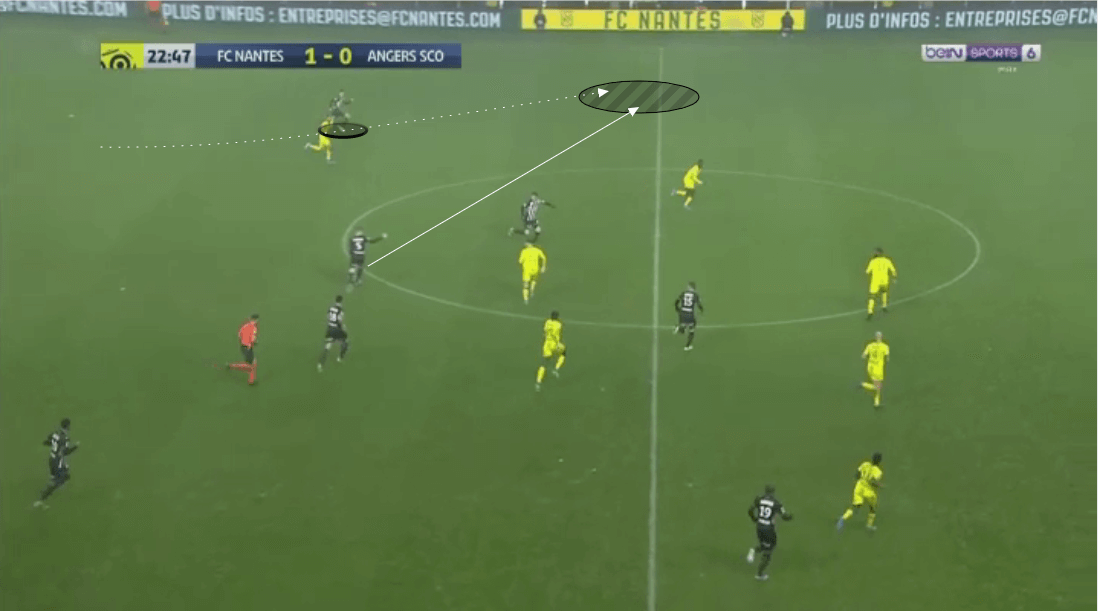 However, should he have an attacking teammate on the same flank he will still push forward regardless. His teammates have a good understanding of his attacking intentions and expect him to contribute in the attacking phase, looking for him to either overlap or underlap. By doing so he can create space for his attacking teammates, or get himself into a position to receive and cross. 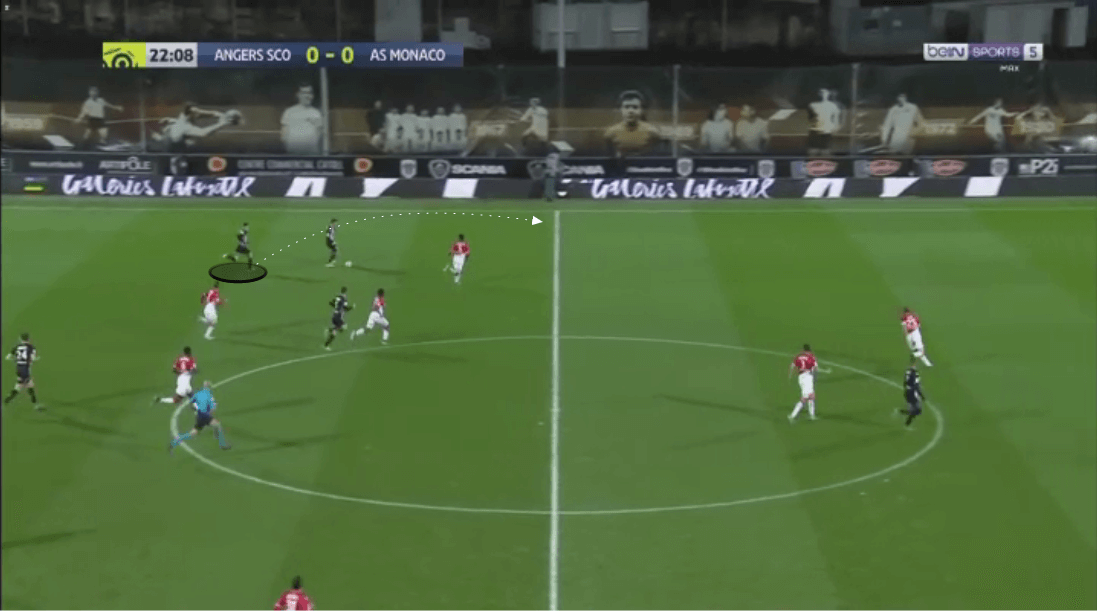 Aït-Nouri doesn’t just look to take up this space in transition either. In possession he is able to draw his opponent towards him and subsequently push forward, again using his pace. His teammates are aware of his qualities and know to look for the ball behind the opposition right-back as an outlet. 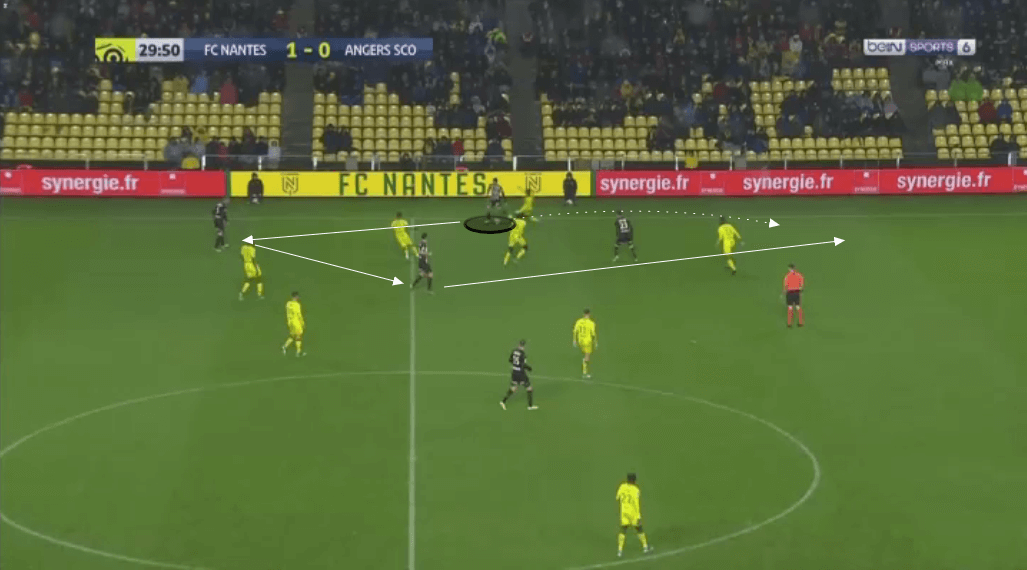 Aït-Nouri is an outstanding crosser and ranks 24th in Ligue 1 for crosses made this season per 90 minutes, with 3.47. However, what is most impressive is that he ranks third in the league for accuracy with 42.31%, behind only Fabian Centonze of Metz, and Andy Delort of Montpellier. Delort takes a very similar amount of crosses per game, however, Centonze takes over one cross less per game than Aït-Nouri.

For such a young and inexperienced player, Aït-Nouri is incredibly calm on the ball and his decision-making in possession is of a high standard. He is left-footed, however, is confident with both, and isn’t afraid to play short passes under pressure. He isn’t one-dimensional, rarely looking to just hit the ball over the top, instead he searches for options to play out, and play forward if possible into the midfield.

In the image below, despite being pressed intensely within his own defensive third, he chooses to cut back on himself and play inside with his right foot into central-midfield where his teammate is open. 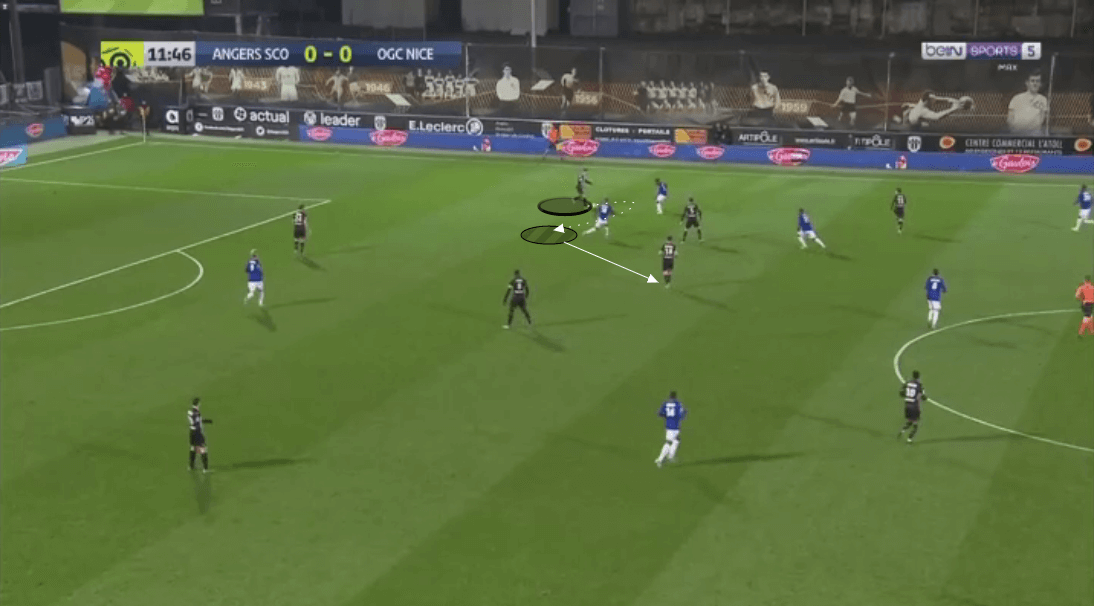 He is at ease on the ball wherever he’s in possession on the pitch. As mentioned he is excellent in attack and frequently finds himself with the ball in the attacking third. Aït-Nouri is a strong passer and has good vision. We can see an example of this as he carries the ball forward into the opposition half, spotting the curved run of his forward across the defensive line. He is able to perfectly whip the ball at enough of an angle to meet the forward whilst also squeeze through the gaps in the opposition defence. 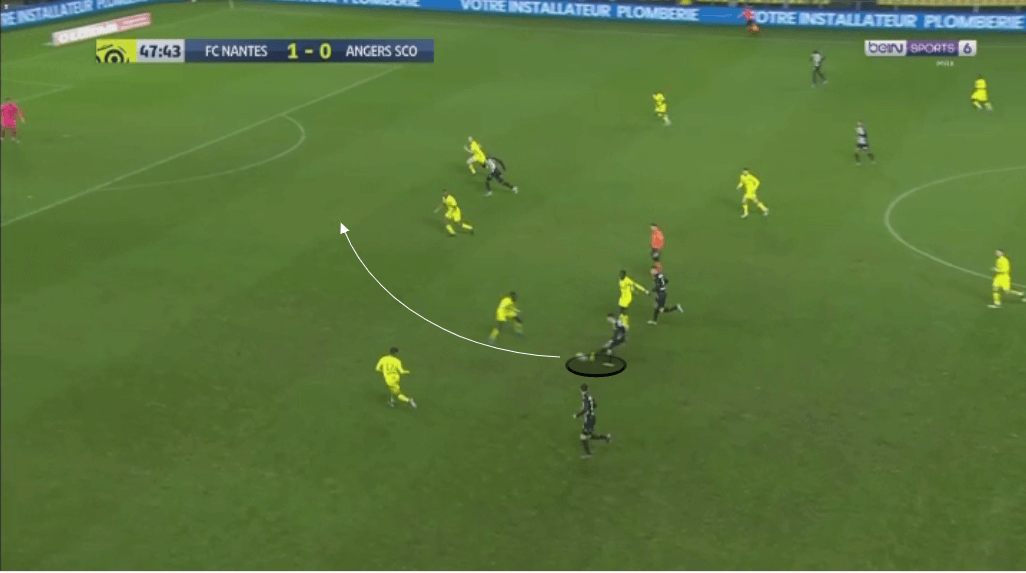 Aït-Nouri is a confident dribbler too, and will take players on in 1v1 situations regardless of where is on the pitch. This season he has averaged 4.41 dribbles per game, and has been successful with 45.5% of them. Below, despite having two options on the left-flank, Aït-Nouri chooses to take on his opponent, shaping as if to play to the left but instead cuts inside, breaking the line of pressure. 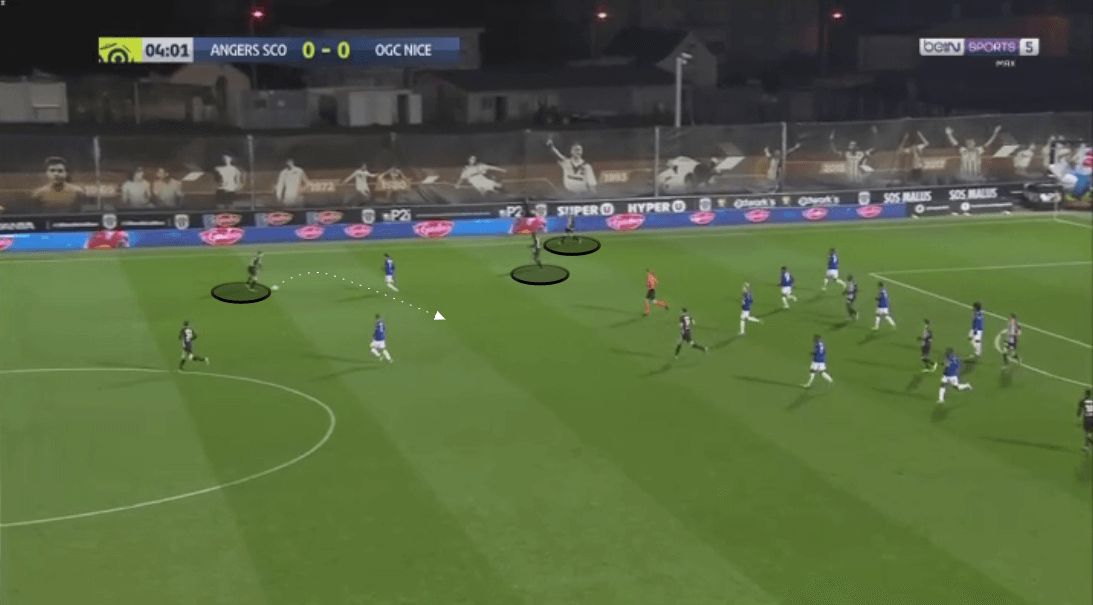 However, this isn’t to suggest he is someone who takes risks, perhaps putting his own defence in undue pressure. As mentioned earlier his decision making is very good, in fact it is one of his best qualities, and he knows when is the right time to play forward, or dribble when under pressure, or when to just retain possession. In the image below, he receives possession from his centre-back Romain Thomas. Seeing he is under immediate pressure, and that the Marseille right-back Horiko Sakai is anticipating him looking to dribble down the line, he doesn’t take the gamble and keeps possession by playing back to Thomas. 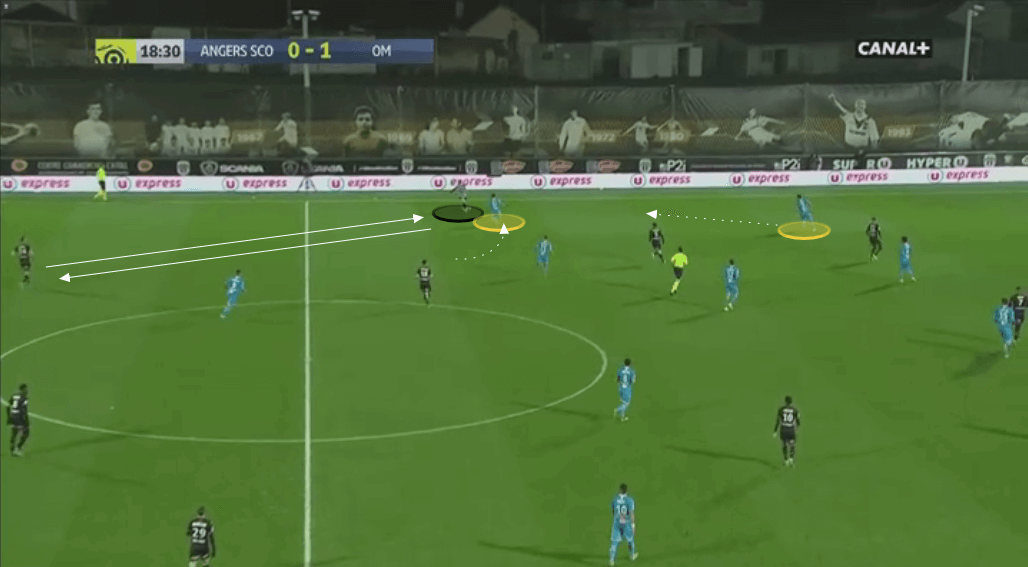 Aït-Nouri already has a lot of obvious strengths as an attacking full-back, however, he does need to improve his defensive awareness and positional sense.

At times he has a tendency to get a little lax positionally and can drift too far from his left-sided centre-back leaving space inside for opposition players to drop into. Below he is out of position with Monaco in possession on the opposite flank. His body positioning means he is unaware of the far-sided Monaco player looking to push forward in his blindside, whilst there is a good amount of space between him and his centre-back for another Monaco player to drift into. A ball down the line to the overlapping left-back and a deep cross and Aït-Nouri would find himself exposed, and possibly doubled up on by two attackers. 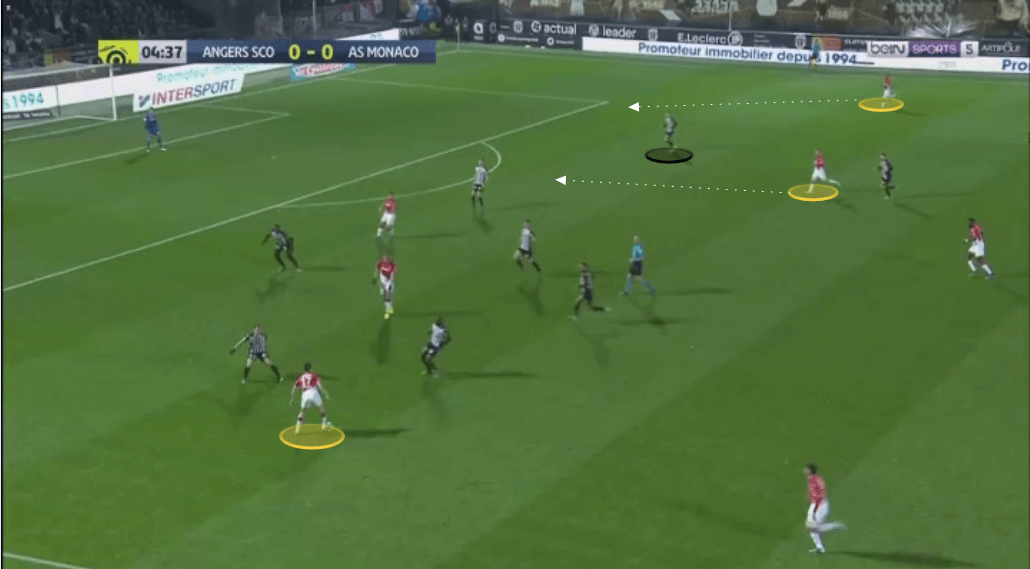 Again, linked to his positional understanding he has shown a lapse in concentration at times and looked to dive into tackles, which puts a huge amount of pressure on the outcome of the tackle, with him leaving space behind him for the opposition to attack as the image below shows. 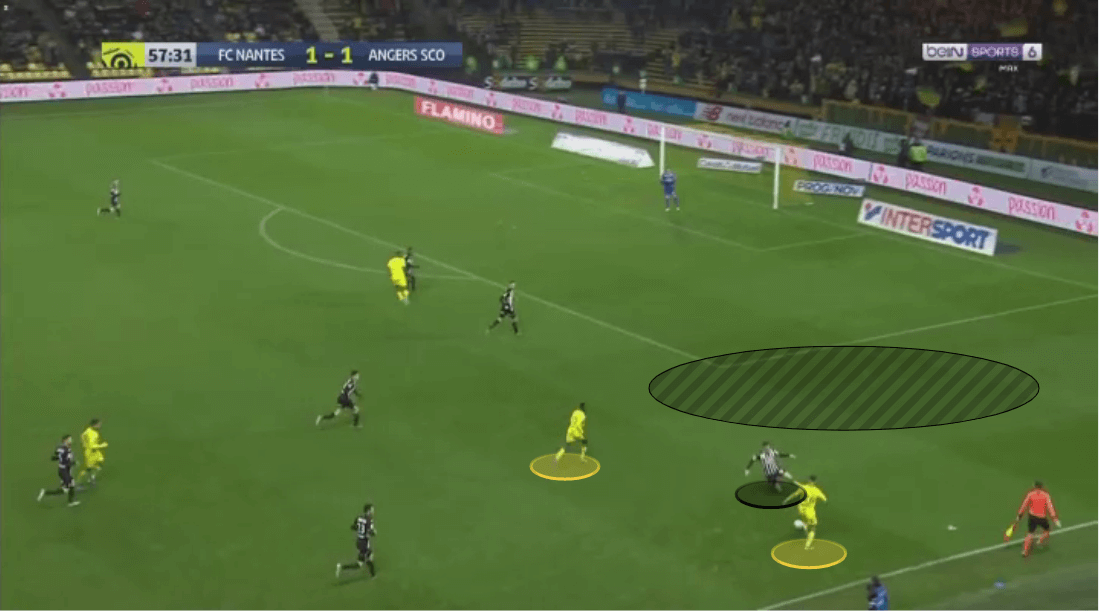 He is eager to win back possession, which is obviously a quality coaches want in any player, however, his youthful enthusiasm could see him exposed in such situations either with the ball played behind him and subsequently his defence will be stretched, or he could be targeted by the opposition as an easy way to get a player put in the referee’s book early.

In attack, with the amount of crosses he takes, as well as his completion percentage it would be great to see him add more assists to his game. He has had two so far this season and it could be argued that both of these were fortunate, coming from over-hit crosses missing their intended target. Although perhaps his low amount of assists is an indictment of his options in attack, or perhaps even of crossing as a form of attack.

Aït-Nouri is a particularly exciting prospect and is arguably the most exciting young left-back in Europe, let alone of the most exciting young defenders. He has pace, is combative and is strong in the tackle. The chart below shows how he ranks highly for duels per 90, aerial duels win percentage, and it also shows his talent as a crosser, with his 42.31% crossing accuracy. 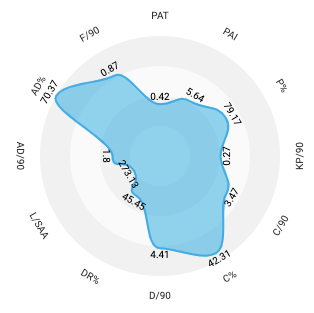 On the ball he is a strong passer – confident with both feet – and looks to play out from the back, engage in quick interchanges, and carry the ball forward himself. On the other hand, he will look to receive the ball in space, whether that’s in a switch of play, or behind the opposition right-back, where his number one priority is to hit crosses into dangerous positions in 18-yard box.

It will be interesting to see how his summer unfolds, as it would be very surprising to still see him in an Angers shirt come the start of next season. What’s for certain is that he won’t have a shortage of potential suitors, however, one hopes he opts for a team that will continue to provide him with regular minutes as Angers have done, and continue developing him into a potential elite left-back on the world stage.