The 2021/22 Premier League season is less than a month away. Clubs have started their preparations for the new season with some teams signing new players well ahead of the others. Some promising youngsters from the 2020/21 season will look to establish themselves as first-team regulars this coming season. One such player is Fábio Silva of Wolves. The 18-year-old signed from FC Porto for a club-record fee before the start of the 20/21 season and is yet to become a regular in the team, in spite of several of Wolves attacking players being injured last season.

The following is a visualisation of Fabio Silva’s numbers from last season. Centre-forwards aged only 23 or under at the start of 2021/22 season were considered for this analysis. 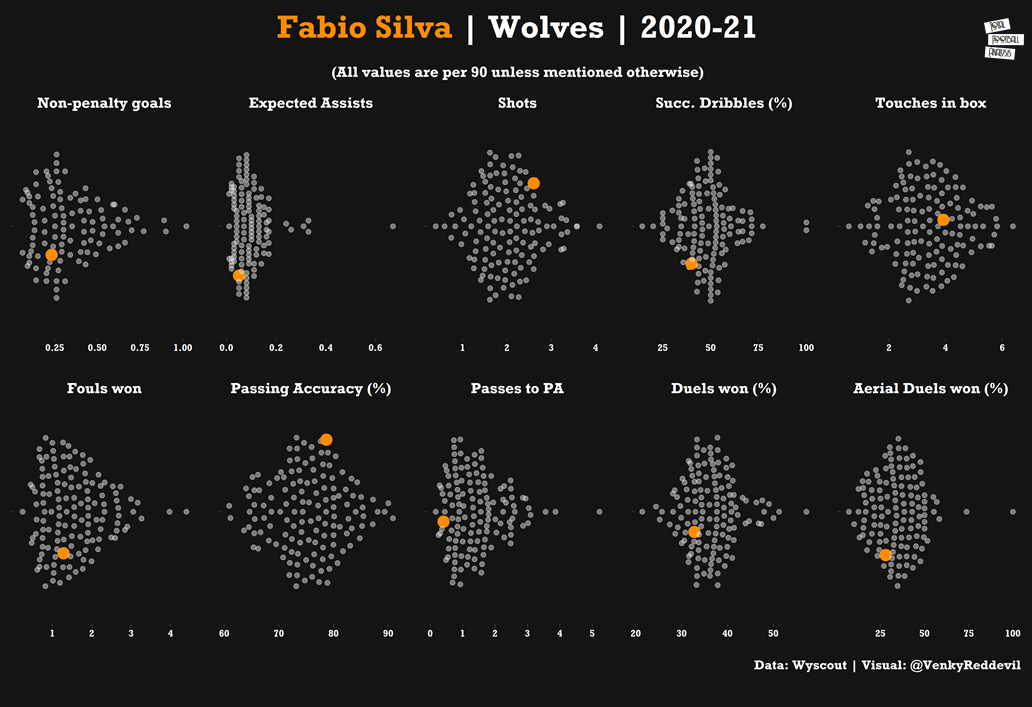 Fábio Silva played 1986 minutes last season, not bad for an 18-year-old record signing. However, he will look to play more regularly in the upcoming season. The return of Raúl Jiménez from injury means that Silva will once again have to fight for his place. During the time he was on the pitch last season, the teenager showed some promising signs that will make the money paid for him worthy.

He scored six goals last season and had an xG per 90 value of 0.5 goals, which is top 20 among U23 center-forwards. Silva, will look to better that number in the coming season. Only two other teenagers (Mason Greenwood & Bukayo Saka – both of whom have been playing from even before last season) had scored more goals than Silva last year.

The centre-forward was in and around the average mark for most of the metrics. It is fair given it was his first season in a new country and a more challenging league. However, if there is one attribute that Silva really needs to improve upon it’s his aerial ability which is very important for a centre-forward. Silva has an aerial duels success rate of just 28%.

To summarise, Silva has shown he has the qualities to make the step up to the Premier League. Everyone will have an eye on him in the coming year. It has to be said that he is still only 18 and has a long way to go but he is already in one of the best leagues and there is no better place for him to prove himself to everyone.