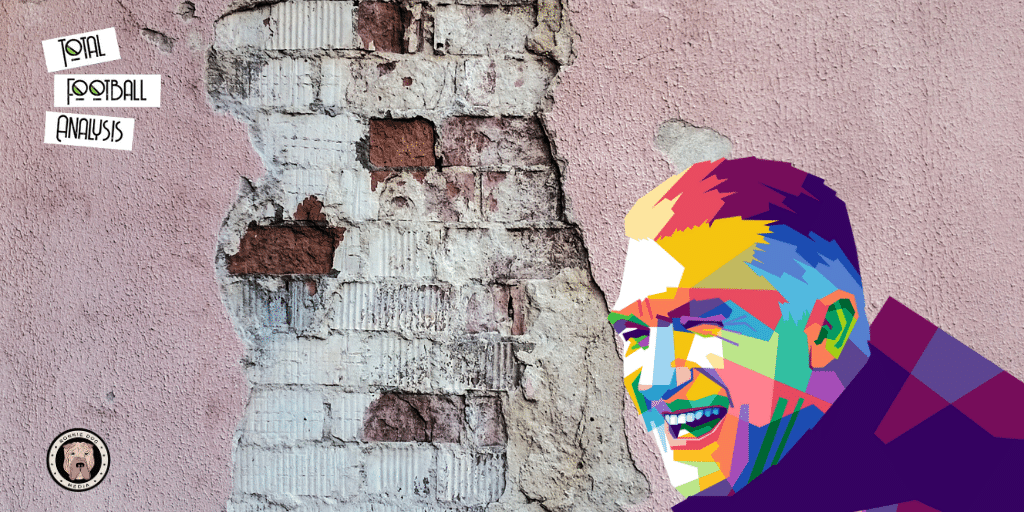 Towards the middle of December, was almost a foregone conclusion that Watford would be relegated at the end of this season. The club had fired Javi Gracia after a poor start to the season, replacing him with former manager Quique Sánchez Flores, only for the Spaniard to also flounder. Watford had a grand total of eight points from 15 games and were seven points from safety when Flores was sacked as well, and it seemed as if there was no way back for the Hornets. However, the appointment of former Leicester City manager Nigel Pearson has proven to be a masterstroke. Watford picked up a point from the next game, against Crystal Palace, under the caretaker management of Hayden Mullins, with Pearson’s first game being a daunting trip to Anfield to face Liverpool. In the eight games since the Hornets have picked up 14 points to move off the bottom of the table and are only in the relegation zone on goal difference. This has been a stunning turnaround and saw Pearson given the Premier League’s Manager of the Month award for December. This piece will be a tactical analysis of Pearson’s tactics and how he has managed to engineer such a comeback in such a short span of time.

Just looking at the numbers themselves shows the vast improvement that Pearson has coaxed out of this Watford team. Prior to his appointment, the Hornets were performing abysmally at both ends of the pitch. They had conceded 30 goals in 16 games while having scored only nine goals themselves. Seen on a per game basis, this works out to scoring just 0.56 goals per game and letting in 1.88. What is worse is that they were underperforming their xG metrics as well – their xGA for this period was 24.7, while their xG was 18.4. Thus, as one can see, they were scoring far less than they should have and conceding far more.

However, under Pearson, this trend has been reversed. Watford have scored 12 goals in his eight games in charge while conceding just six goals. This means that per game, Watford have scored 1.5 goals while letting in only 0.75, a complete reversal of the scenario prior to Pearson’s appointment. They have also improved massively on the expected goals metrics, with an xG of 12.6 and an xGA of 9.83 over this period, demonstrating the improvement that Pearson has brought about. This has been achieved despite Watford playing five of the current top-eight in Pearson’s eight matches in charge so far (Liverpool, Manchester United, Sheffield United, Wolves and Tottenham).

While these numbers show how well Watford have performed at either end of the pitch since Pearson’s arrival, there are some more statistics to show the nuances behind this revival. Under Gracia and Flores, Watford were offering Ben Foster almost no protection; opposition teams were getting 41% of their shots on target. Since Pearson’s appointment, this has come down to 32%. They are also pressing slightly more than earlier – PPDA under Pearson has been 11.9, while it was 12.4 under Gracia and Flores. In terms of attacking, Watford are actually taking the same number of shots per match as they were earlier, which means that their goalscoring improvement has come about through better finishing. They’ve also gone more direct – long pass % has increased from 13.3% to 15.8%, as Pearson has looked to utilise the pace and directness in his squad.

The next part of this analysis will look at specific changes made by Pearson in both defensive and attacking scenarios.

One of the first changes made by Pearson was to move away from the system used by Flores. Under the Spaniard, Watford used to line up in a 5-3-2, which severely limited their attacking output. Pearson switched to a back four, and Watford have used a 4-2-3-1 almost exclusively since then. This has allowed him to bring Ismaïla Sarr into the team on the right flank, where he has been superb, and also allowed Abdoulaye Doucouré to play as a number 10 with a lot more freedom. The Frenchman has scored twice and has provided two assists as well in Pearson’s eight games in charge so far, having scored just once with no assists in the previous 16 matches. Having a two-man pivot behind him has allowed Doucouré to get up the pitch to support attacks, and he has often been in space in dangerous positions as a result – 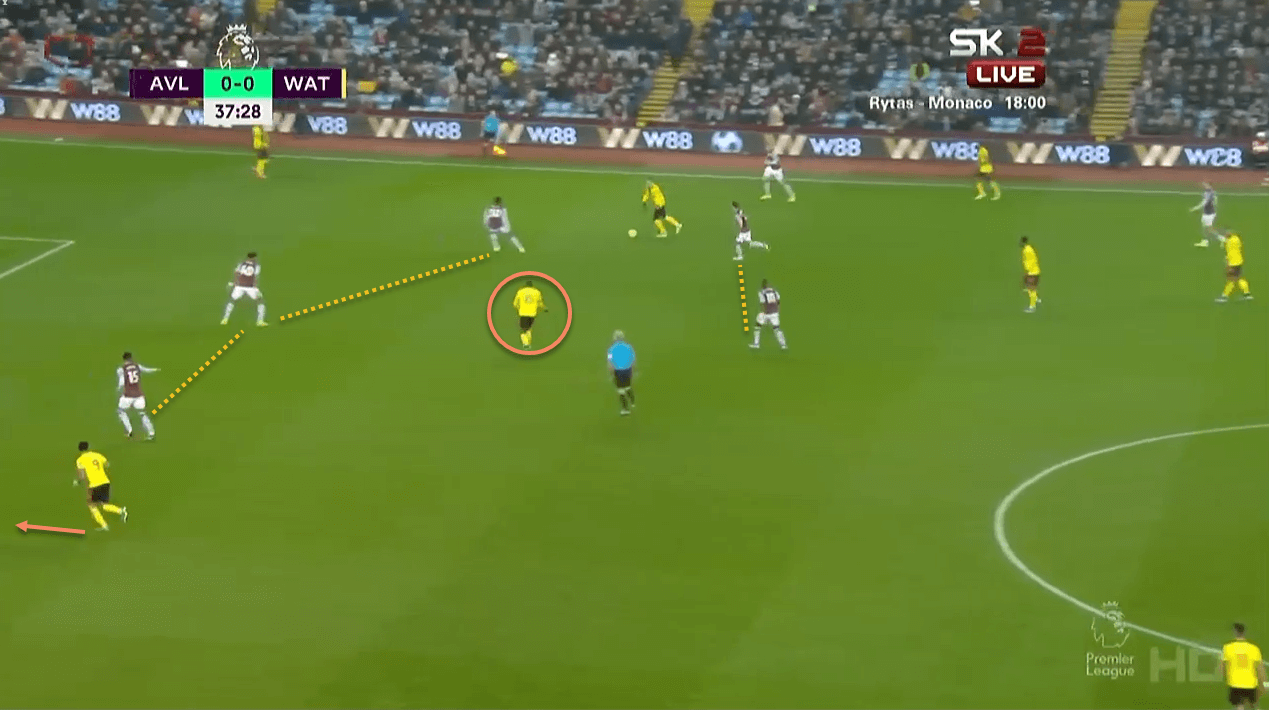 Troy Deeney is pushing the Aston Villa defence back, along with Gerard Deulofeu’s run, thus allowing Doucouré to find space between the lines 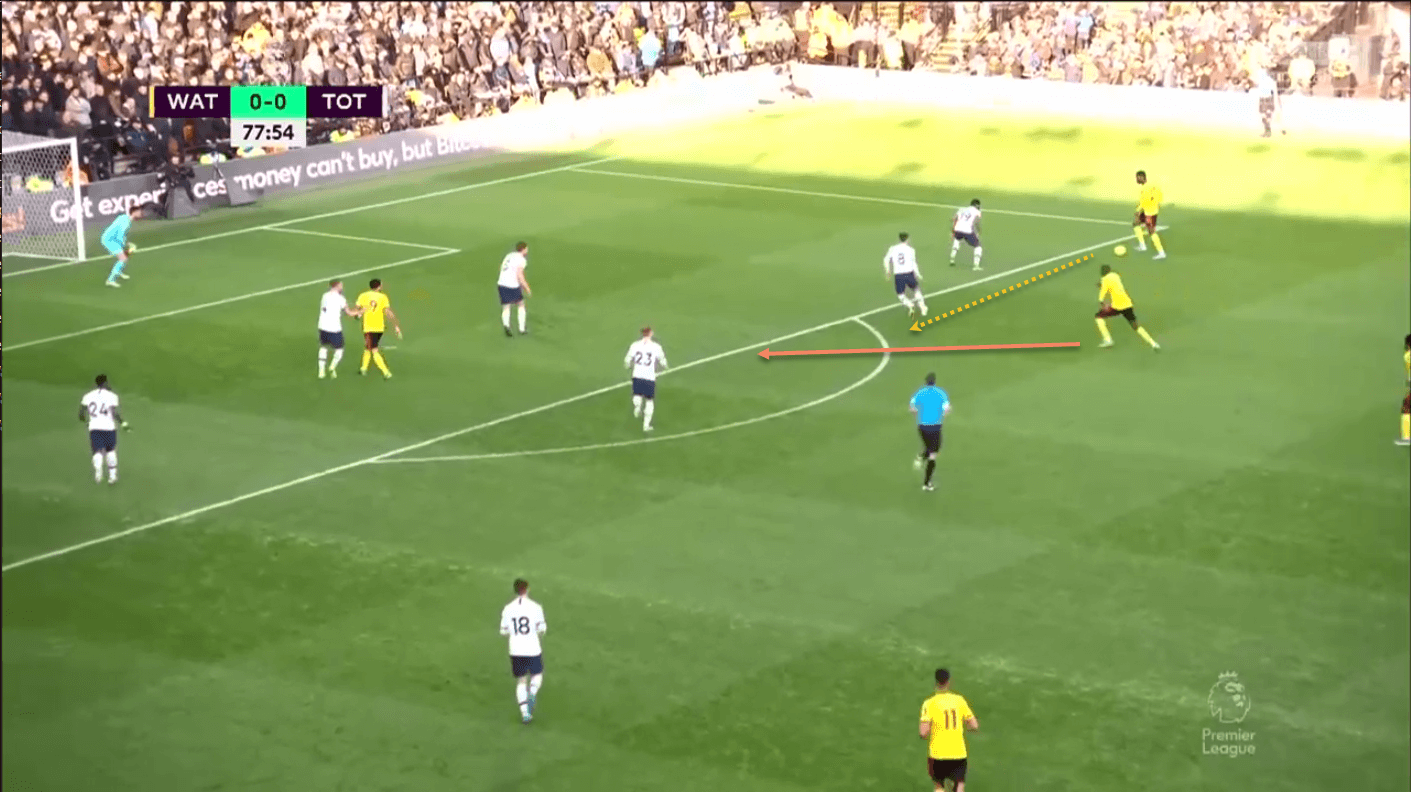 Here, the Frenchman is once again unmarked and can make a run into the box if Sarr finds him with the pass 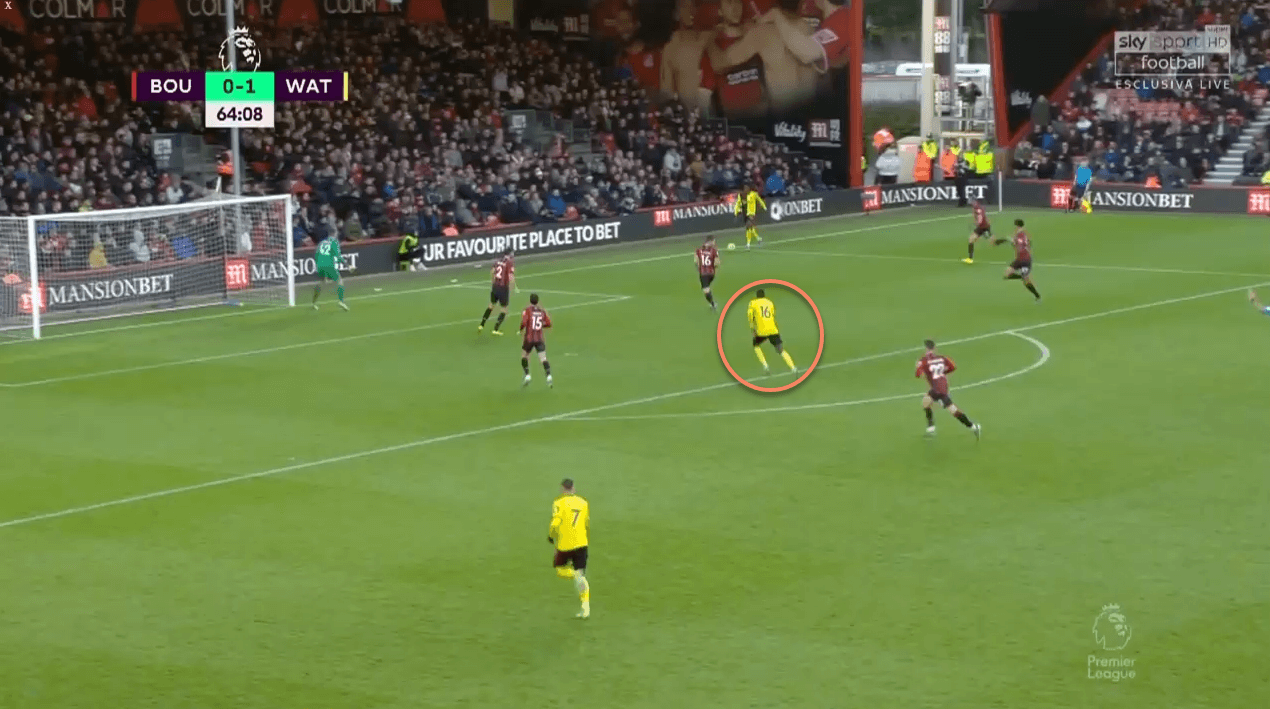 As the images show, the change in system has benefited Doucouré immensely. He is able to find space between the lines and make late runs into the box, safe in the knowledge that he has two midfielders covering for him. Doucouré was widely linked with a move to the likes of Manchester United and Tottenham a couple of seasons ago on the back of his all-round exploits in midfield, and it looks like he is getting back to that kind of form once again.

As mentioned previously, Pearson moved Watford from a 5-3-2 to a 4-2-3-1 shape, with an immediate improvement in both the defensive and attacking side of the game. This formation meant that he could play two pacey, direct wingers in Deulofeu and Sarr, with Deeney’s return from injury also proving pivotal as he slotted in as the lone striker. Pearson has used Étienne Capoue as the more defensive of the two holding midfielders, and Will Hughes or Nathaniel Chalobah have alternated alongside him. While we’ve already seen the improvement this has brought to Doucouré, Deeney has also been superb since Pearson took charge, scoring five goals, while Sarr has also scored twice and picked up three assists, having only scored once earlier. This formation suits the personnel at Pearson’s disposal perfectly, and it has allowed them to improve in many facets of their game, as shown below – 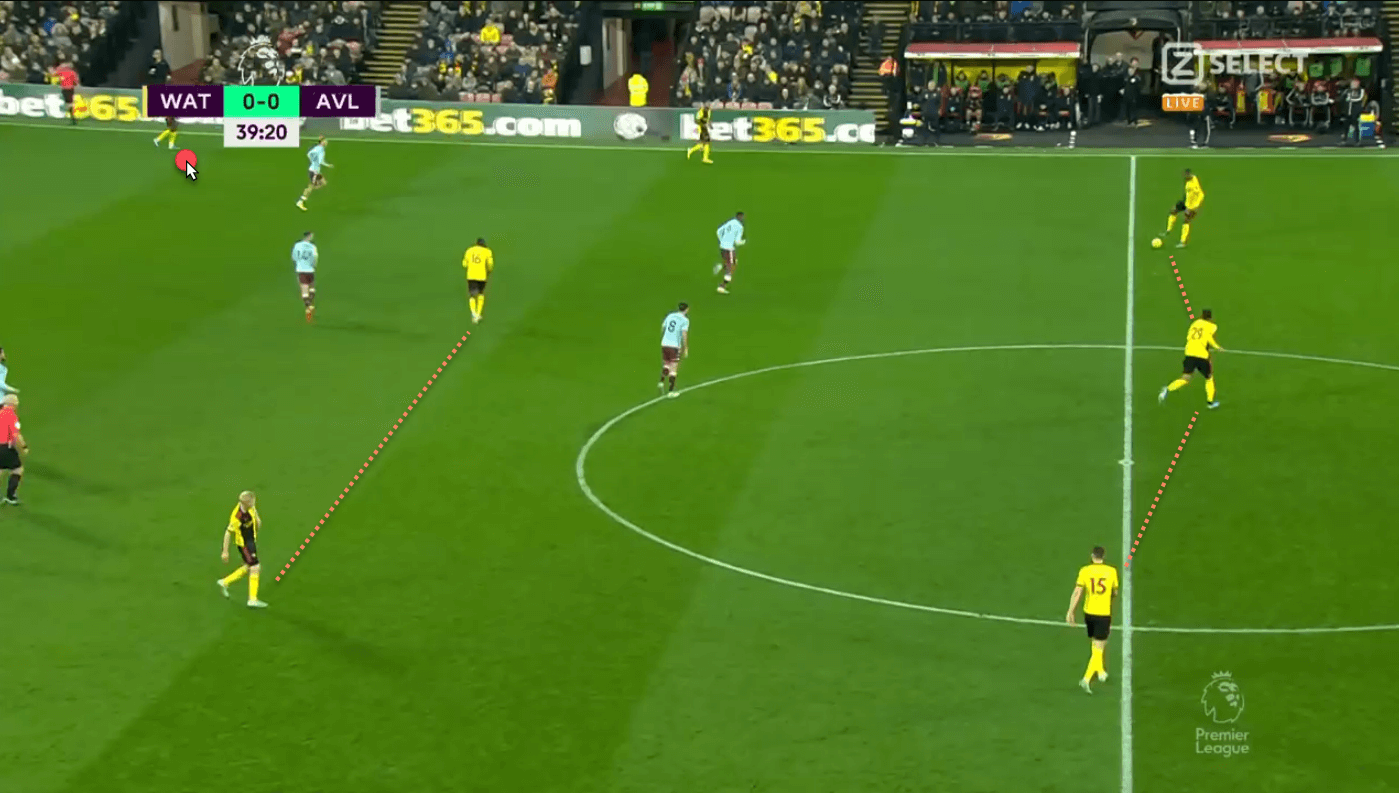 When Watford have possession, Capoue drops in to form a back three, with Hughes and Doucouré staying central as a midfield pair. The right-back is thus able to push up the pitch, allowing Sarr (red highlight) to stretch the play and get in behind the opposition’s defensive line 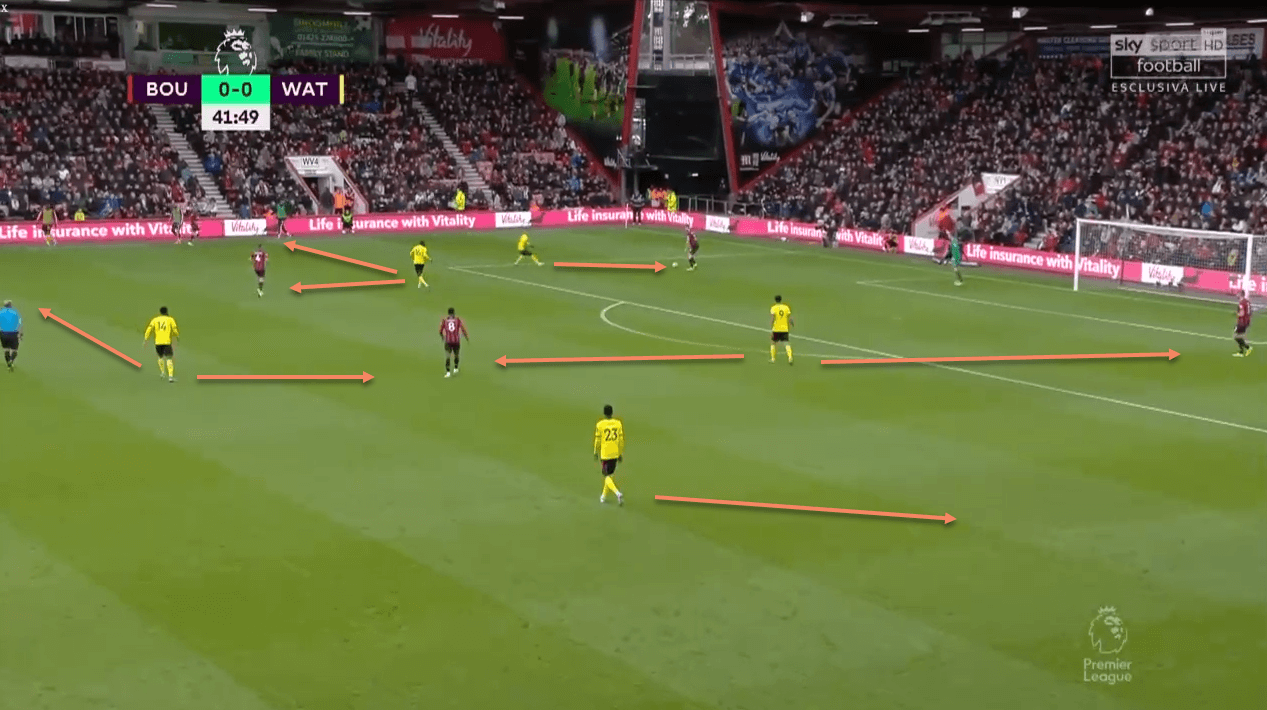 The shape has also helped Watford press better. Here, Deulofeu closes down Simon Francis, who has the ball, while Doucouré is cutting off the pass to Dan Gosling. Deeney is central, ready to close down either Jefferson Lerma or Steve Cook, with Chalobah in support. Sarr, on the right, will shift over to close down Nathan Aké if the ball moves out to his flank… 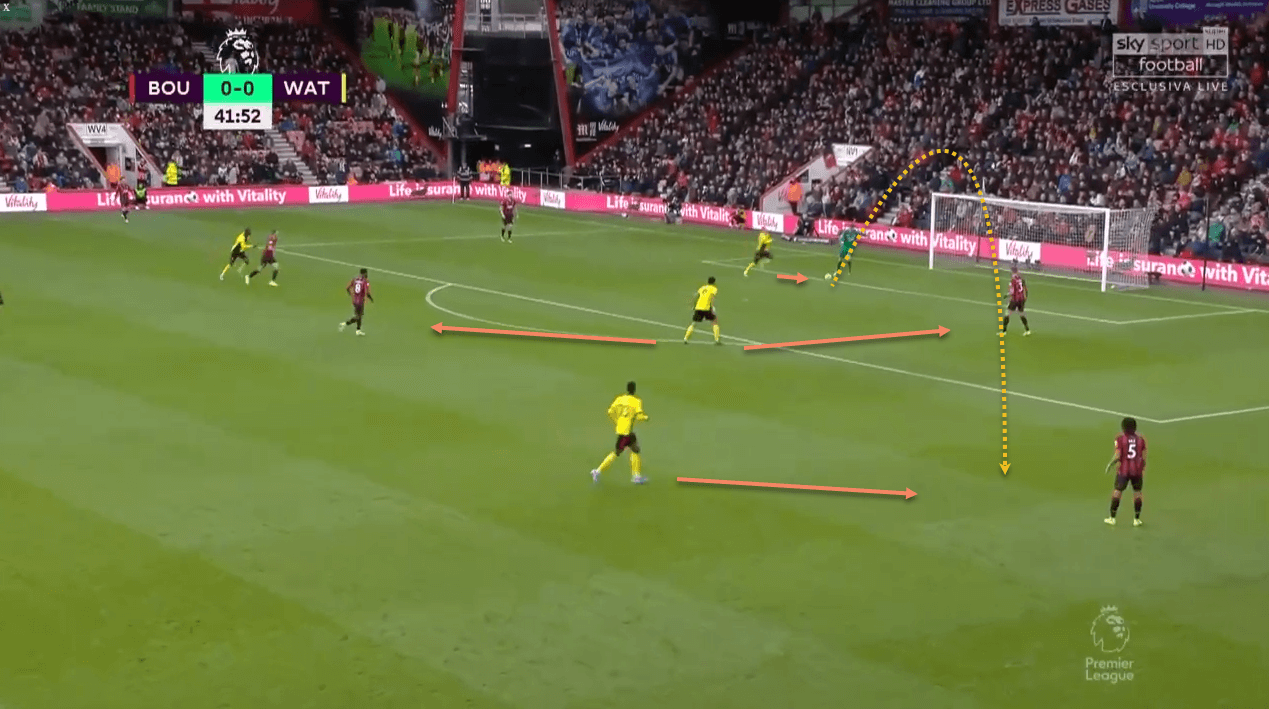 …the ball is played back to the goalkeeper, who is rushed into making a clearance by Deulofeu. Deeney’s presence means that he cannot pass to Lerma or Cook, and he mis-kicks the ball towards Aké, where Sarr pounces and then crosses for Doucouré to score

As we saw, this formation has allowed Watford to improve the structure of their build-up play, as well as be a better pressing unit. Watford have actually scored three goals where they have induced an opposition mistake from their pressing since Pearson took over. The numbers showed that they are pressing a little more intensely, but the change in shape has allowed them to do so more effectively as well.

Another interesting change has been in the striker’s role. Pearson has been lucky enough to have had Troy Deeney return to full fitness just before his arrival at the club, and consequently, the club captain has been available for all of his matches in charge. The current style of play suits Deeney perfectly, as he can hold up the ball when needed to bring the wingers into play, but also sprint in behind using his intelligent movement and pace. The use of pacey wingers has also meant that Deeney often drops deep, dragging a centre-back out with him to create space for Deulofeu and Sarr to charge into. 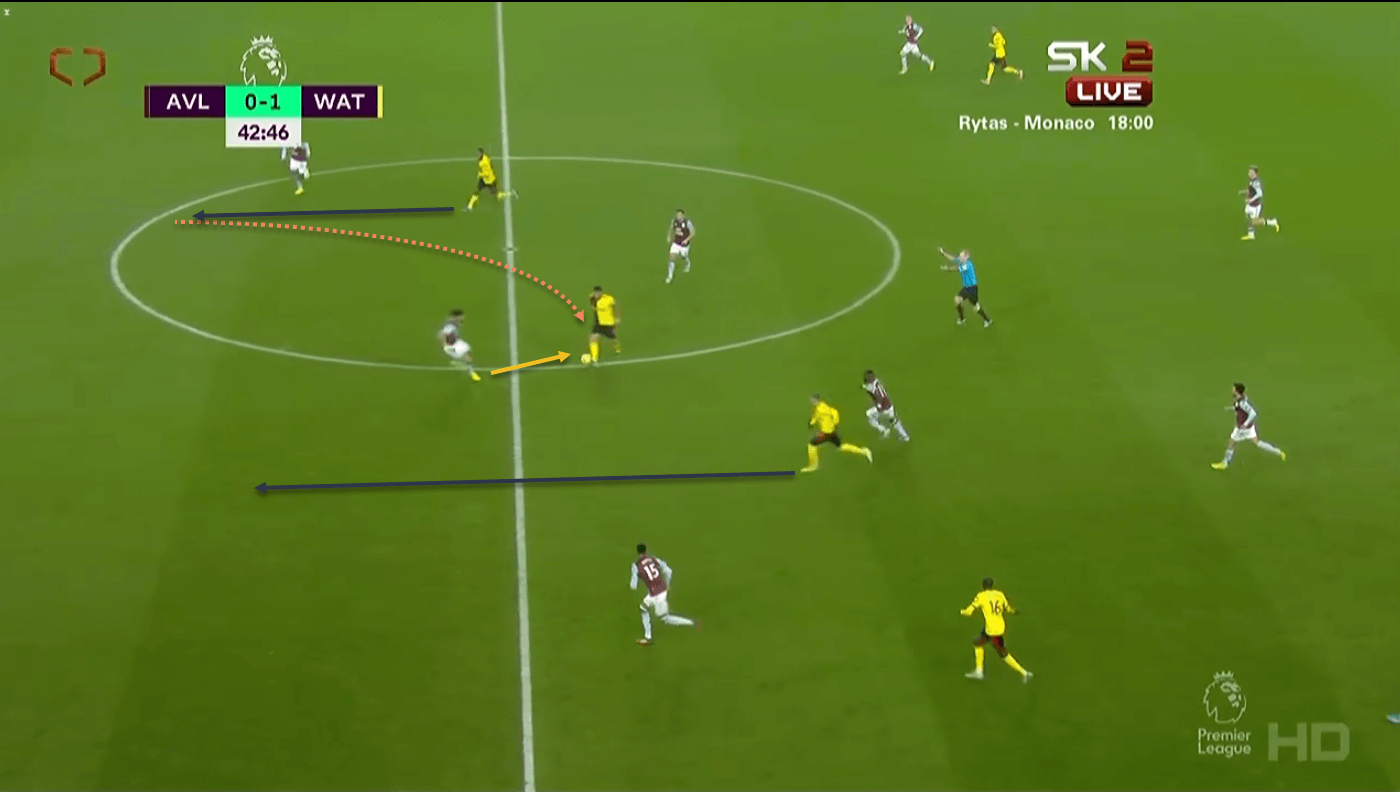 This shape has also helped them from a defensive point-of-view. We’ve already seen how it has allowed them to press more effectively when needed, but Watford are not a very high-pressing side, as seen from their PPDA numbers. They usually look to retreat into a mid or even a low-block once the initial press has been bypassed, and this formation allows them to do so quickly. When out of possession, Watford drop into a 4-4-2, with Doucouré and Deeney forming a front two to shut passing lanes centrally and force the ball wide. 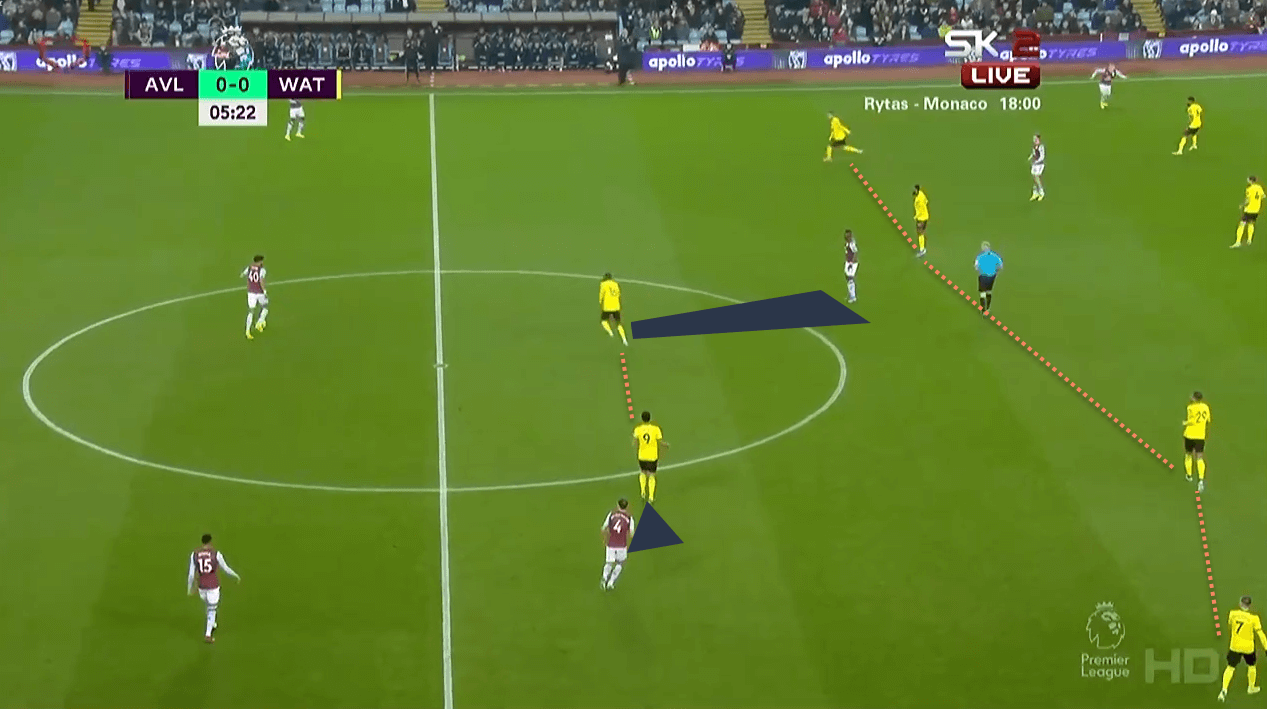 If teams manage to get the ball into Watford’s third of the pitch, they take up extremely narrow, compact positions, defending the width of the box and not allowing the opposition any space between the lines. Deeney often becomes a lone forward at times like this, with Doucouré dropping back too. 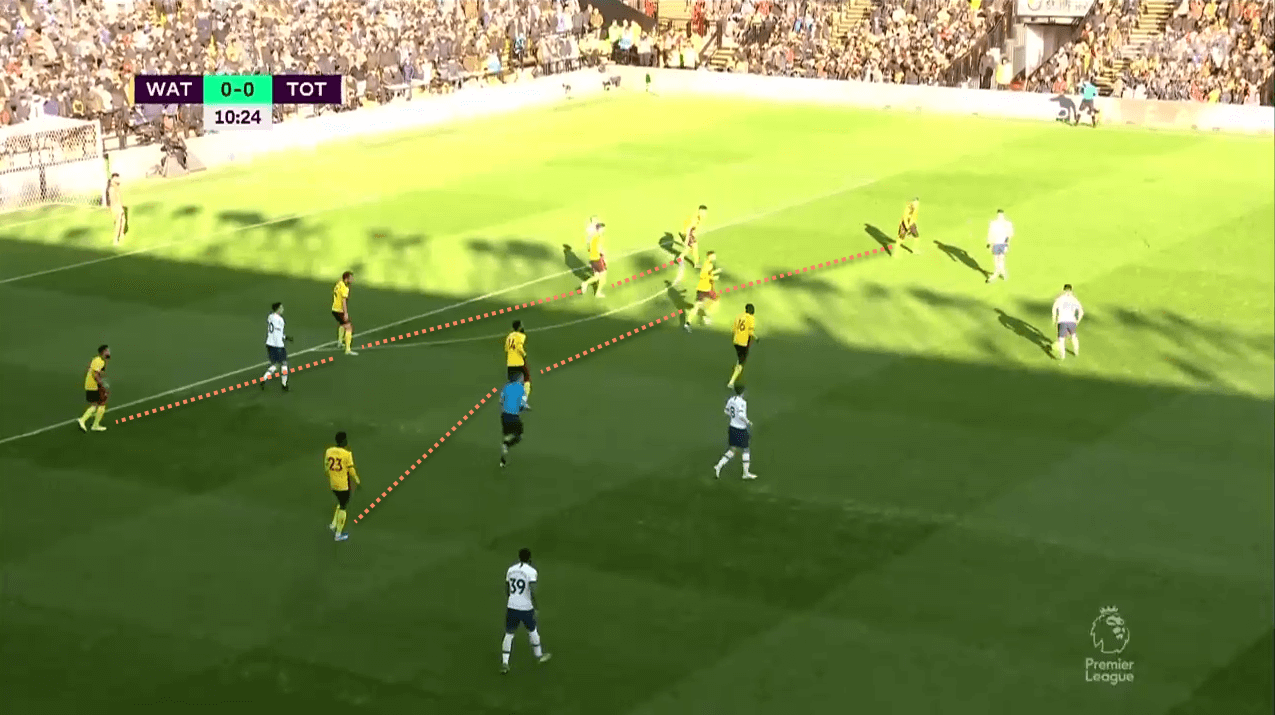 Against Spurs, one can see how narrow and deep Watford are

Only one of the two full-backs usually joins the attack, with the other staying back along with the more defensive of the central midfielders. This gives Watford at least four players to guard against opposition counter-attacks and helps them manage transitions well. 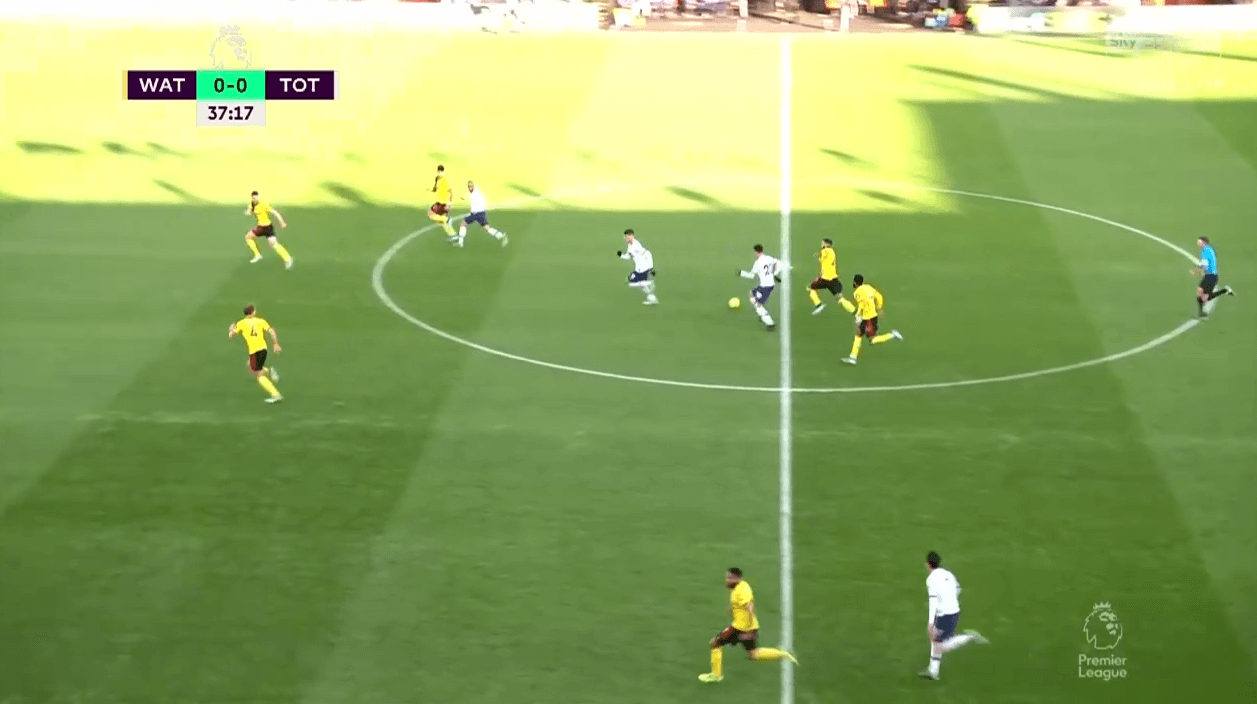 An example of a Spurs counter-attack, where Adam Masina (the left-back) stayed back and the two central midfielders are also chasing back, meaning that Watford have six players defending the counter-attack

Watford’s change in fortunes under Pearson has been remarkable. Most reports have put this down to the work he has done in improving Watford’s mentality and psychology behind-the-scenes, which can be seen on the pitch as well. However, there have also been tactical and personnel changes on the pitch, which as this analysis has shown, have also played a big part in giving Watford a chance to escape relegation, one which looked almost impossible in December.