Mattéo Guendouzi signed for Arsenal as a 19-year-old in 2018 from then Ligue 2 side Lorient. He has not had a great time at Arsenal since then, gradually falling out of favour under manager Mikel Arteta. He moved to Bundesliga last season and impressed a whole lot of people and for this season he is back to his home country signing for Olympique de Marseille on loan for the 2021/22 season.

The below visualisation shows Guendouzi’s numbers from last season when he was on loan at Hertha BSC. Midfielders aged only 23 or under at the start of 2021/22 season were considered for this analysis. 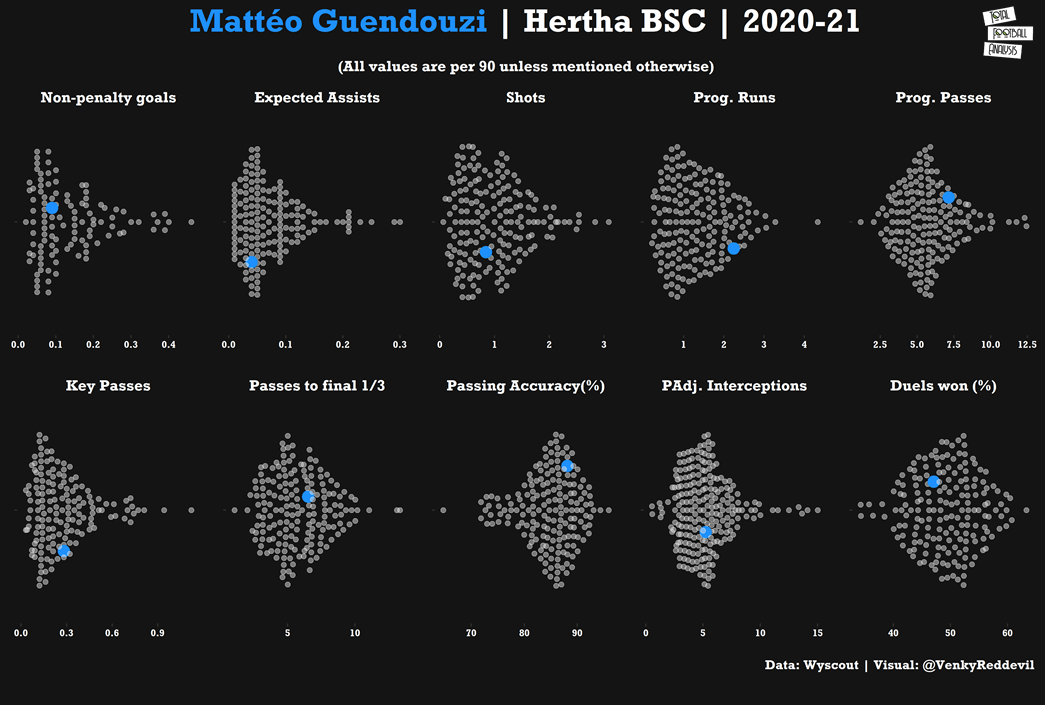 Guendouzi was involved in 20 90s for the Bundesliga club. During his time at Hertha BSC, the 22-year-old French midfielder turned out to be one of the best young midfielders in the league. Guendouzi is not a creative midfielder but rather players in a deeper position. This is quite evident in his numbers for expected assists.

He possesses excellent passing skills ranking above average for passing accuracy with a 79% accuracy. The midfielder also ranked in the top 10 among U23 midfielders in the Bundesliga for progressive passes per 90. He also likes to make a late run to the box as evident in the above visualisation. Defensively he is average to above average with quick reactions and anticipations. He averaged roughly only one foul per 90 minutes in the Bundesliga last year and that goes onto show he is also quite clean in his defending.

Guendouzi is only 22-years-old and he is currently in a team where he is wanted. He impressed quite a lot of people during his time at Hertha BSC. He is one of the players to watch out for in Ligue 1 for the upcoming season.