Over the past decade or so one of the most interesting narratives in football has been the improvement in terms of youth development in English football. Changes in coaching methodology have led to the creation of a generation of footballers with not only the physical tools to succeed, something long associated with English players, but the technical ability and tactical intelligence to make it to the very top of the game.

Last summer saw one of these players, perhaps the best of all, secure a move from his boyhood club to one of the absolute giants of European football. This move, of course, saw the mercurial Jude Bellingham move from Birmingham City to Borussia Dortmund in Germany.

Bellingham is a rare case in that he is a player who made his professional breakthrough as a 16-year-old. This is of course something that can happen in football but it is not the norm for that 16-year-old to go on to immediately establish themselves as a first-team regular. Not only a first-team regular but a key figure in the centre of the midfield in one of the most combative leagues in Europe.

Bellingham is special, that is why he figures on our list as one of the 21 for ‘21.

The first thing that stands out when you watch Bellingham play is his physical stature. He is listed at 180cm | 6’ but he plays with such an upright stance that he seems taller. As a 17-year-old with already broad shoulders he looks to have the frame and capacity to continue to add muscle as he gets older. This does, of course, come with its own inherent risks as too much bulk can affect a players range of movement and agility.

Bellingham perhaps plays best as a midfielder in the box to box role. He has the athletic capacity to cover ground and always seems to be positioned near the ball, either to press and engage in the defensive phase or to add support in the attacking phase of the game. You can also easily make the argument that Bellingham can be used in a playmaking role in the centre of the midfield or even as a ‘10’ where his ability to receive the ball with his back to goal and hold off pressure is notable.

Bellingham is technically intelligent and he has quick feet that he uses to receive in tight areas before manipulating the ball past opponents and progressing the ball for his team.

Out of possession Bellingham is an extremely active player. He uses his understanding of space well in order to take up strong positions against the ball and he is often the player who moves aggressively to engage the ball carrier as the opposition are progressing the ball into dangerous areas.

Bellingham is strong and aggressive and is active in engaging the opposition in duels. He is a forward thinking defender who reads the game well and will look to step in front of a pass in order to reach the ball before the attacker that the pass was intended for. When defending in space he is agile and opens his hips well in order to quickly turn and deal with the threat of attacking players potentially running behind him.

At the time of writing Bellingham is averaging an impressive 8.15 defensive duels per 90 and 6.67 possession-adjusted interceptions.

Crucially Bellingham covers ground incredibly well and he has the ability to close down players from range, as we will see. 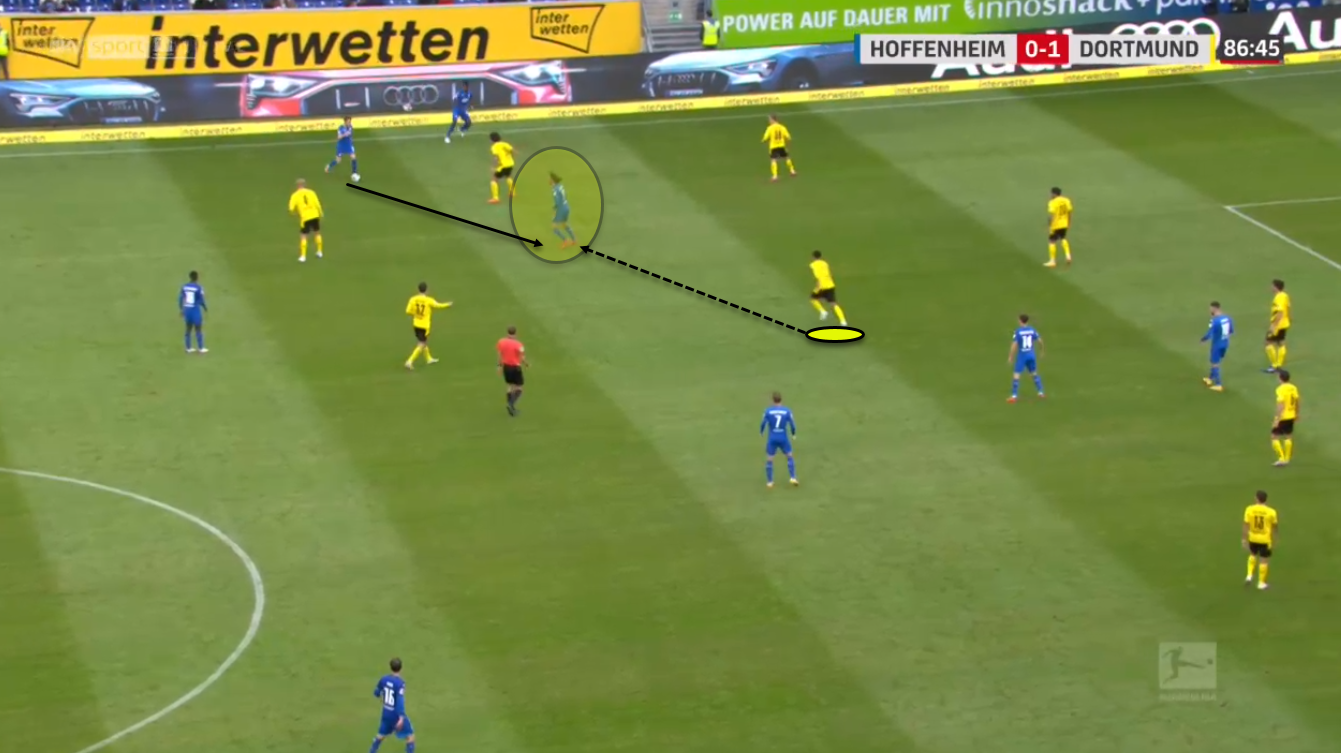 In this example Bellingham is positioned centrally in the defensive structure for Dortmund. The Hoffenheim midfielder has drifted into space behind the Dortmund pressure and it looks as though Hoffenheim have a comfortable passing option with which to play through the first line of Dortmund defenders.

As the pass is connected, however, we see that Bellingham has not only read the threat but moved to close the space and he is positioned to engage the ball and win possession back for his team. 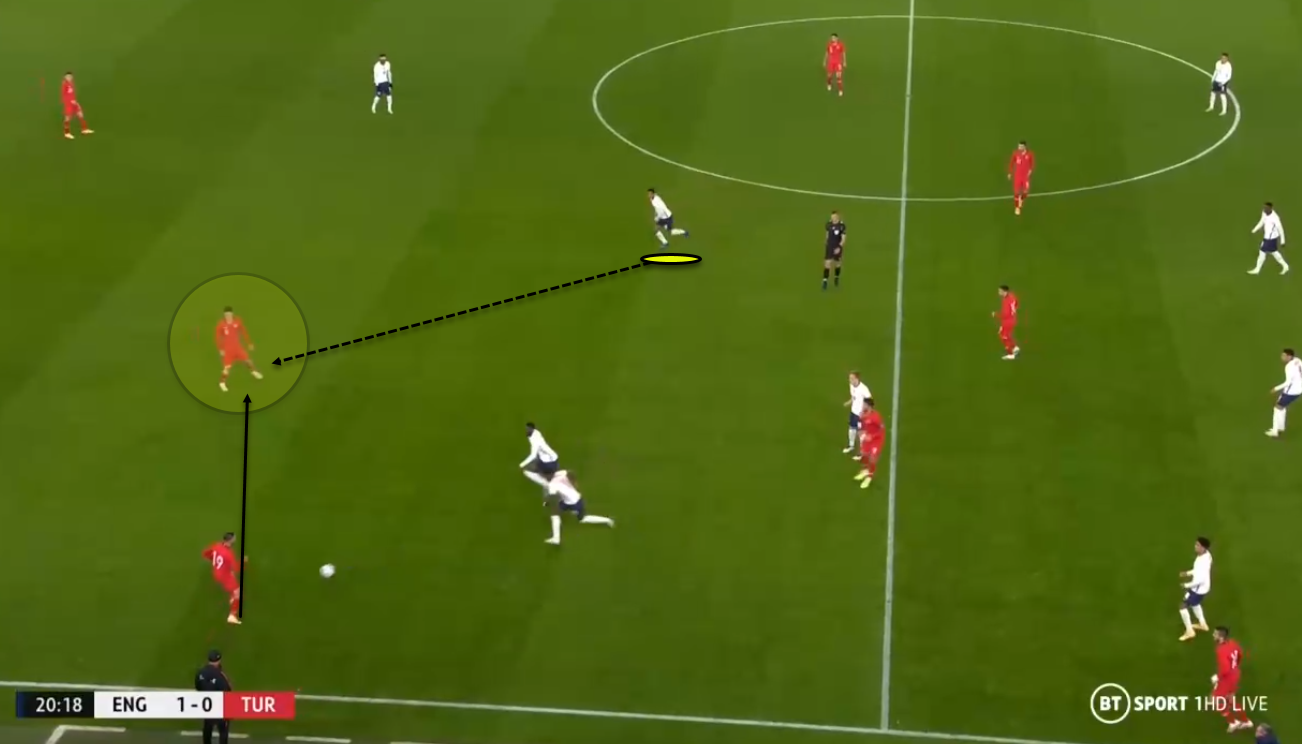 This time we see Bellingham in action for the England U21 side against Turkey U21 and the opposition are looking to recycle possession to maintain their pressure. As two English players are moving to press on the wide lane the player taking possession looks to escape with a relatively simply lateral pass into the central area. Once again, however, we see that Bellingham has read the game and seen that there is a free player. He covers the ground incredibly quickly and is in position to engage and win the ball.

Bellingham is an excellent passer of the ball and he has the range to access all areas of the pitch from the central zone. We often see the young English midfielder in possession in the central areas, once again with that extremely upright physical posture, and he seems to always have time. He is press resistant and willing to accept possession before waiting for the right opportunity to present itself. This tends to be when teammates in advanced or wide positions move to attack space within the opposition defensive structure.

Bellingham has the ability and intelligence

e to either slow the game down with that ability to pause and wait or speed the game up with quick and incisive passes, he tends to make the right choice depending on the game state at the time.

At the time of writing Bellingham is averaging 7.82 passes to the final third per 90 and 8.15 progressive passes per 90. 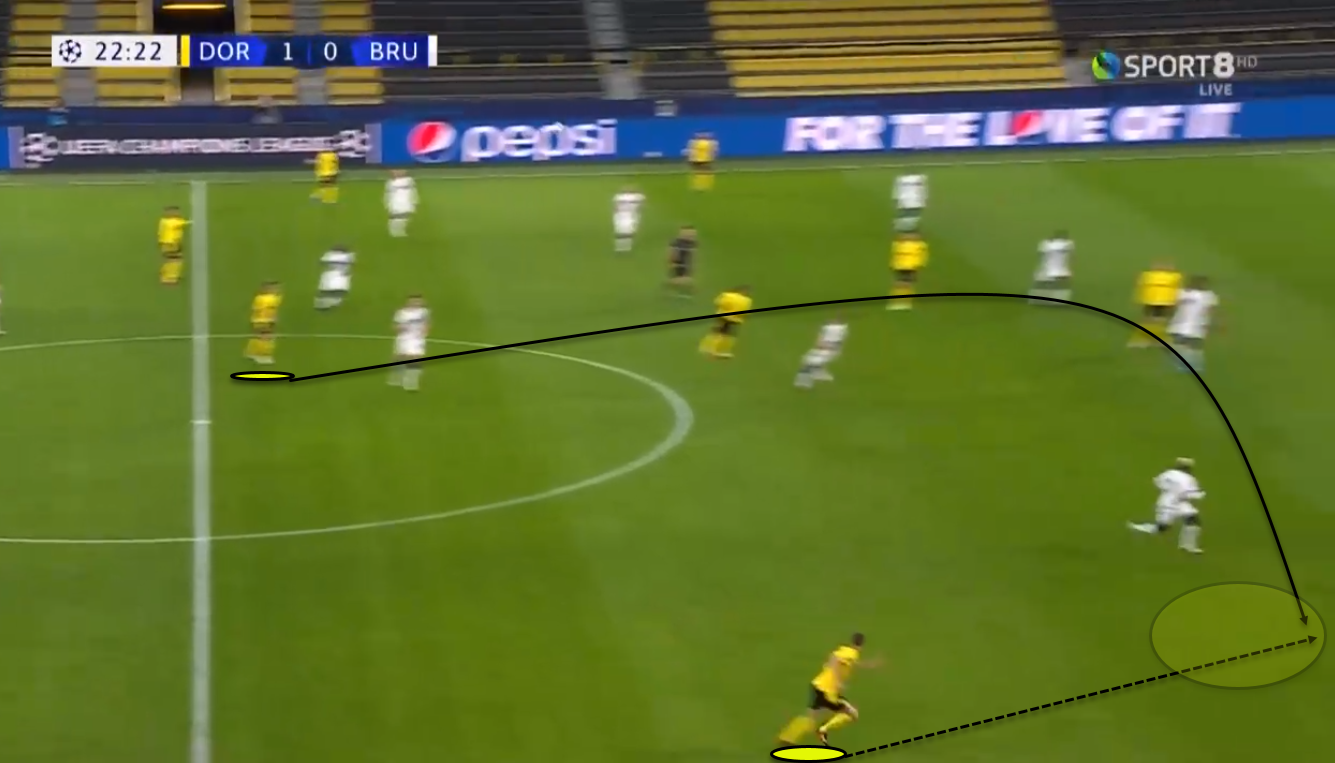 Here we see Bellingham taking possession in the central areas for Dortmund in their Champions League match against Club Brugge. The young midfielder has a tendency to demand possession of the ball in key areas and is always available for a pass in order to help his team to progress the ball into dangerous areas.

Here, he receives the ball and pauses slightly. This allows the Dortmund right-back to advance into a pocket of space and when the time is right we see Bellingham make the pass out to the wide areas to access this space comfortably. 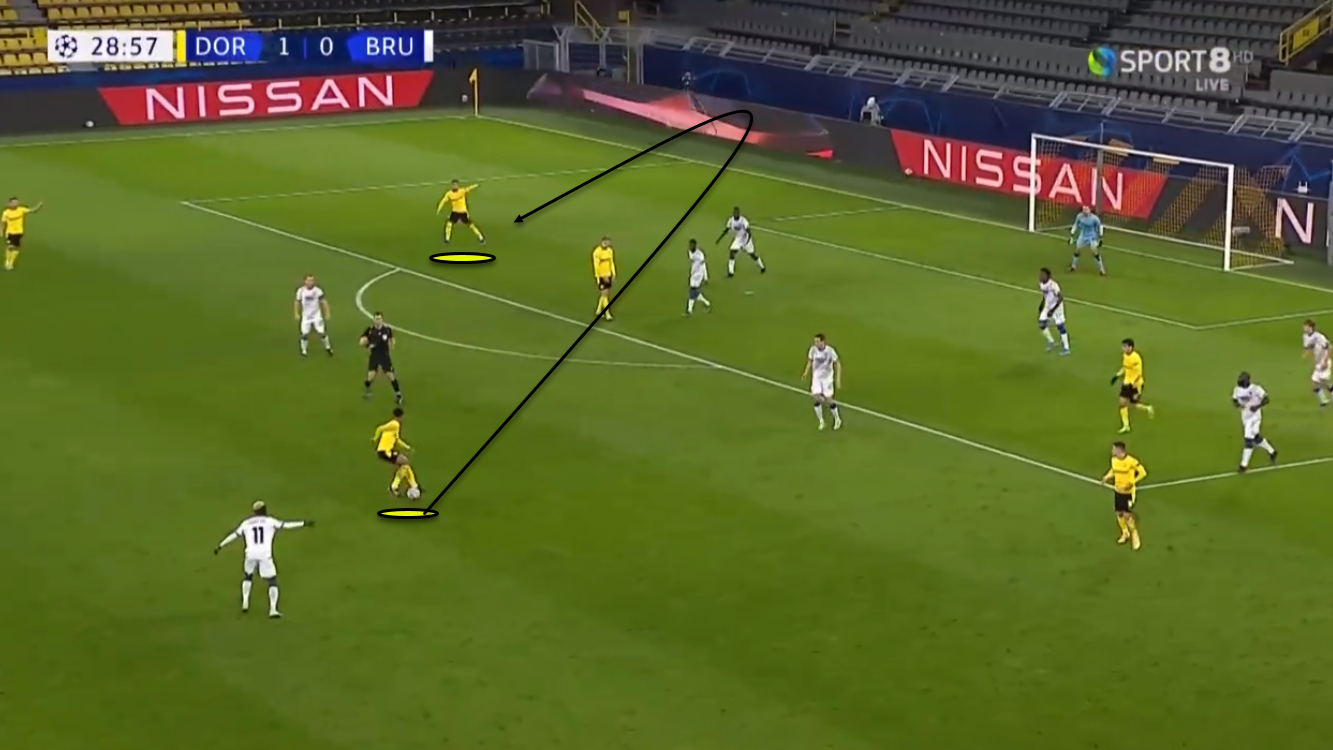 This range of passing extends to spaces around the penalty area and once again in this example it is his ability to act in the game state that is key for Bellingham. This time, in the match between Dortmund and Club Brugge again, we see Bellingham collect possession in a pocket of space outside of the penalty area. Immediately on taking possession in this position he is able to identify that there is a free man over on the far side. Once again Bellingham has the quality to make the correct pass at the correct weight to access this space and create an opportunity for his team.

He receives the ball extremely well with soft feet and he uses his frame well to stay between opposition defenders and the ball. This, combined with his intelligence and passing ability, make him very difficult to dispossess in tight areas.

When receiving the ball in these positions Bellingham is versatile. He can either play in quick combinations with teammates or drive directly at the opposition defensive block. Bellingham carries the ball well and is quick when attacking into space and smart when taking smaller touches in tight areas to manipulate the ball away from defenders. 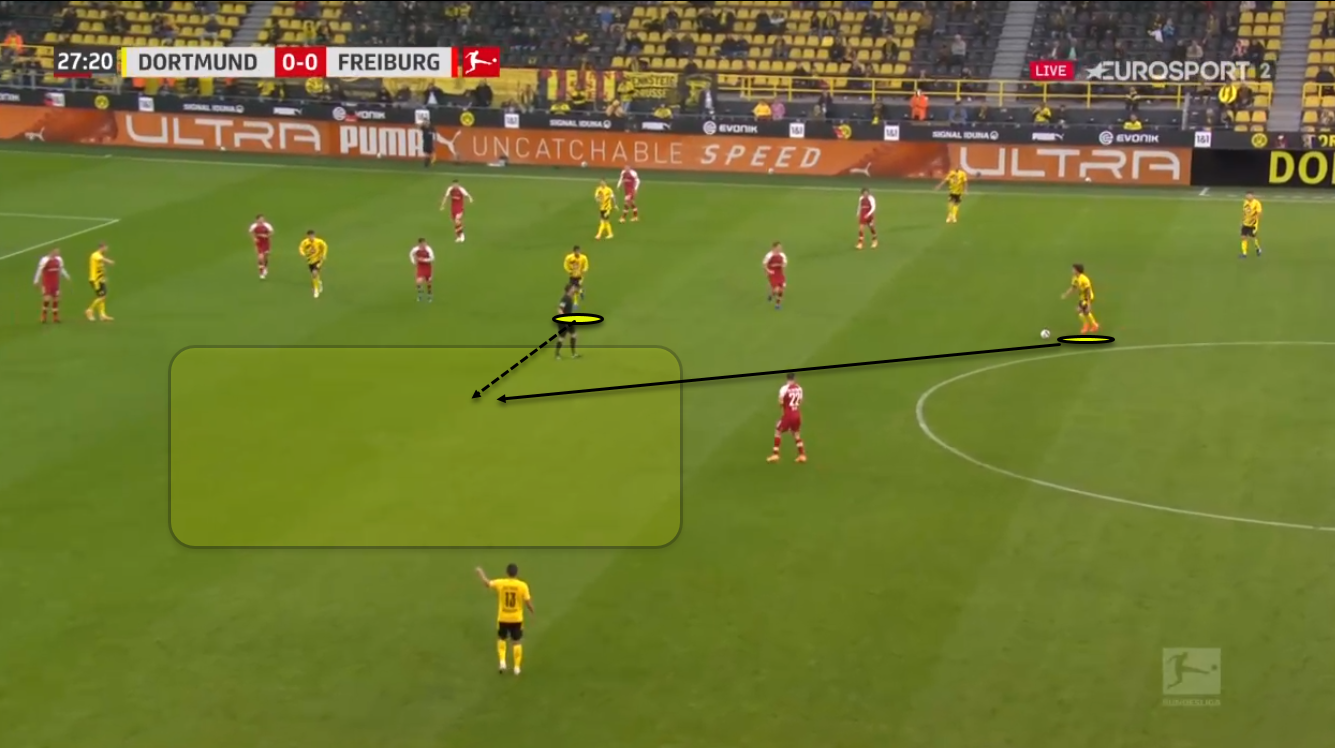 In this example we see Bellingham in an advanced position as he makes an intelligent movement to access space in the opposition half. Dortmund had been building on their right and the Freiburg defensive block had been attracted over to that side of the field. Dortmund have reset the ball with Axel Witsel now positioned in possession centrally.

Now, we see Bellingham move across intelligently to access space. Witsel plays the simple vertical pass into this area and the young midfielder takes possession. In this much space Bellingham will drive at the opposition in order to try to break through. 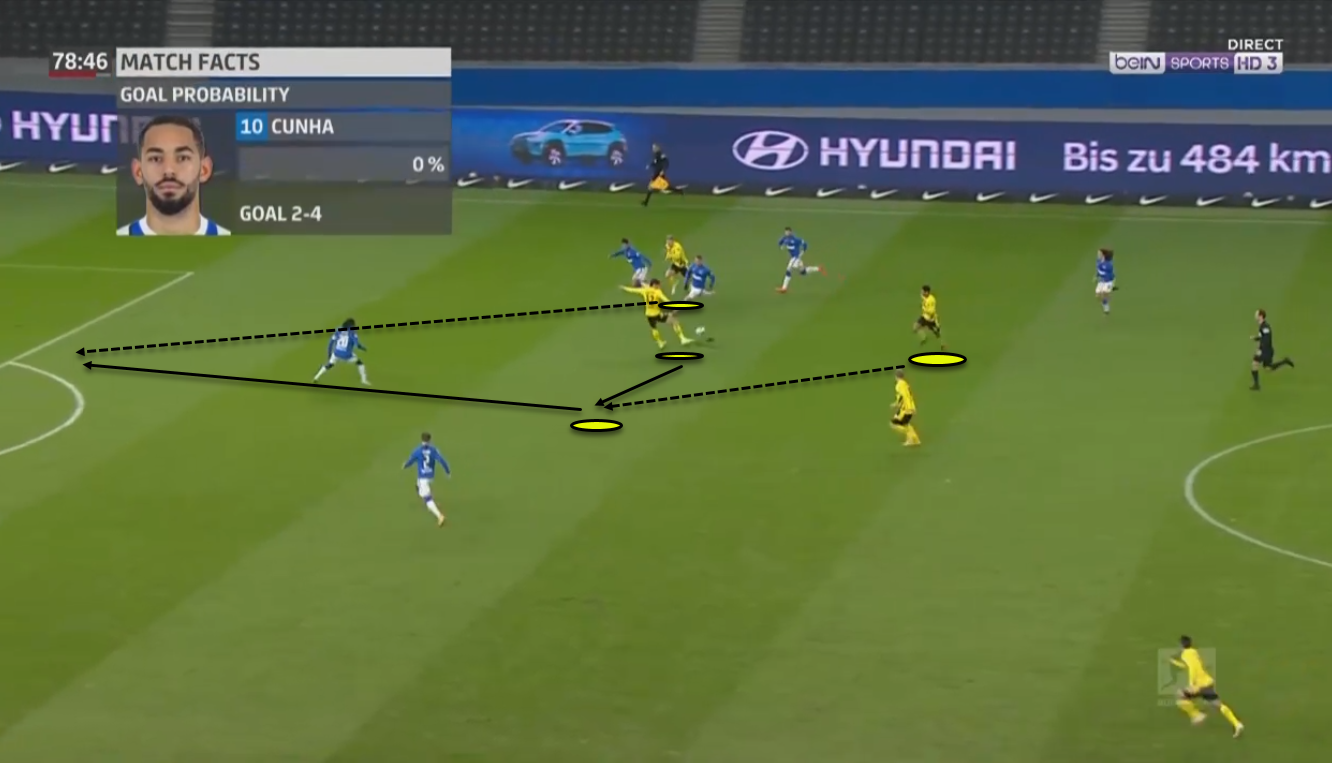 Here we see Bellingham attacking in quick transition as he moves to support the ball and threaten the defensive line of the opposition. Here, the man in possession for Dortmund is off balance and just knocks the ball inside into space.

Bellingham is moving to support behind and reads this before quickly stepping on to the ball, now he is in possession in a dangerous area. Here, Bellingham is a threat to drive at the opposition defensive line but he is also intelligent enough to realise that Erling Haaland is moving quickly on the outside to support the attack. Bellingham plays the through ball to access this run.

Use of the ball in the opposition half

When positioned in and around the final third we see how intelligent a player Bellingham is. We have already seen that he is aggressive when out of possession and that he can control the game from deeper areas when in the attacking phase but he is also creative. He is comfortable taking responsibility as the player who will receive the ball in advanced areas before finding ways to access the penalty area.

At the time of writing Bellingham is averaging 0.67 key passes per 90 minutes and 3.3 passes to the penalty area per 90. 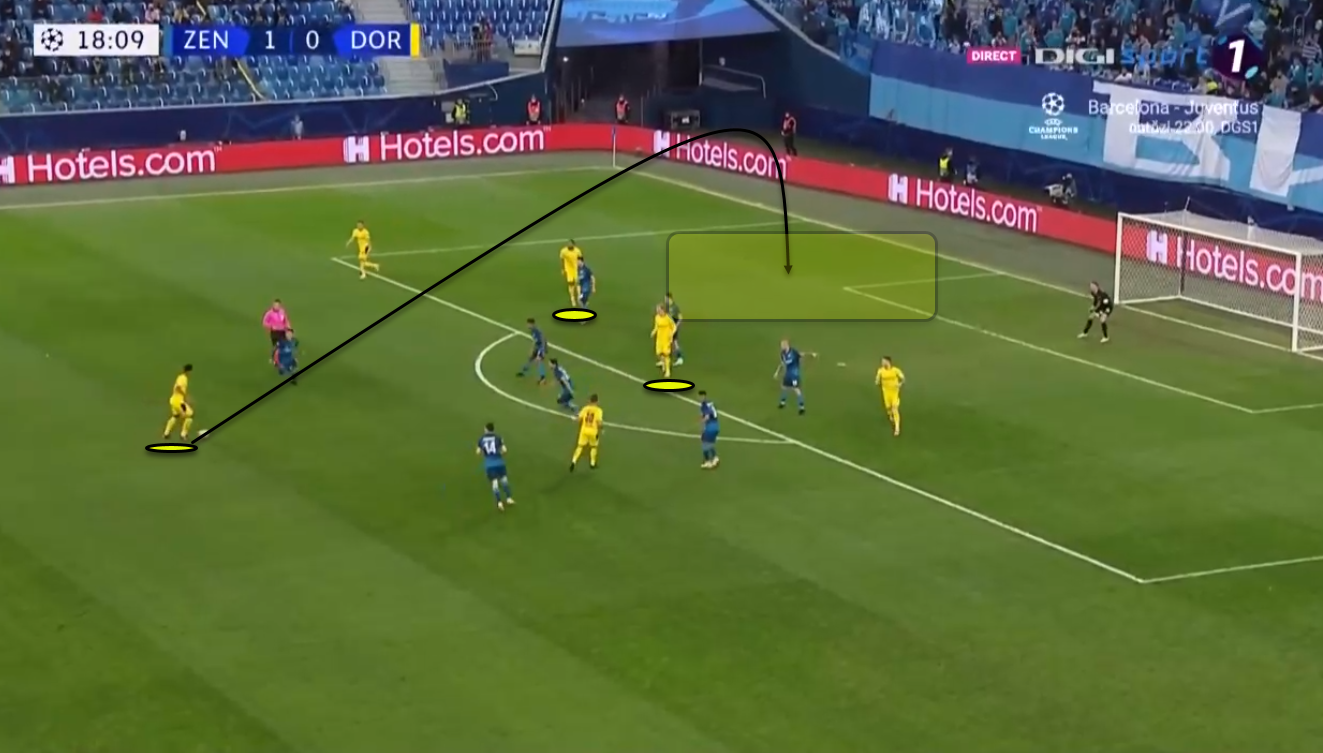 In this example we see Bellingham in possession in a pocket of space just inside the final third. This was the match between Dortmund and Zenit St Petersburg in the Champions League. As Bellingham takes possession of the ball the Russian side are positioned in a compact block around the edge of their penalty area.

Once again we see Bellingham having the composure to make the correct decision in a difficult situation. The young midfielder pauses in possession and then finds the pass to lift a difficult pass over the top of the defensive line into space between the defenders and the goalkeeper. 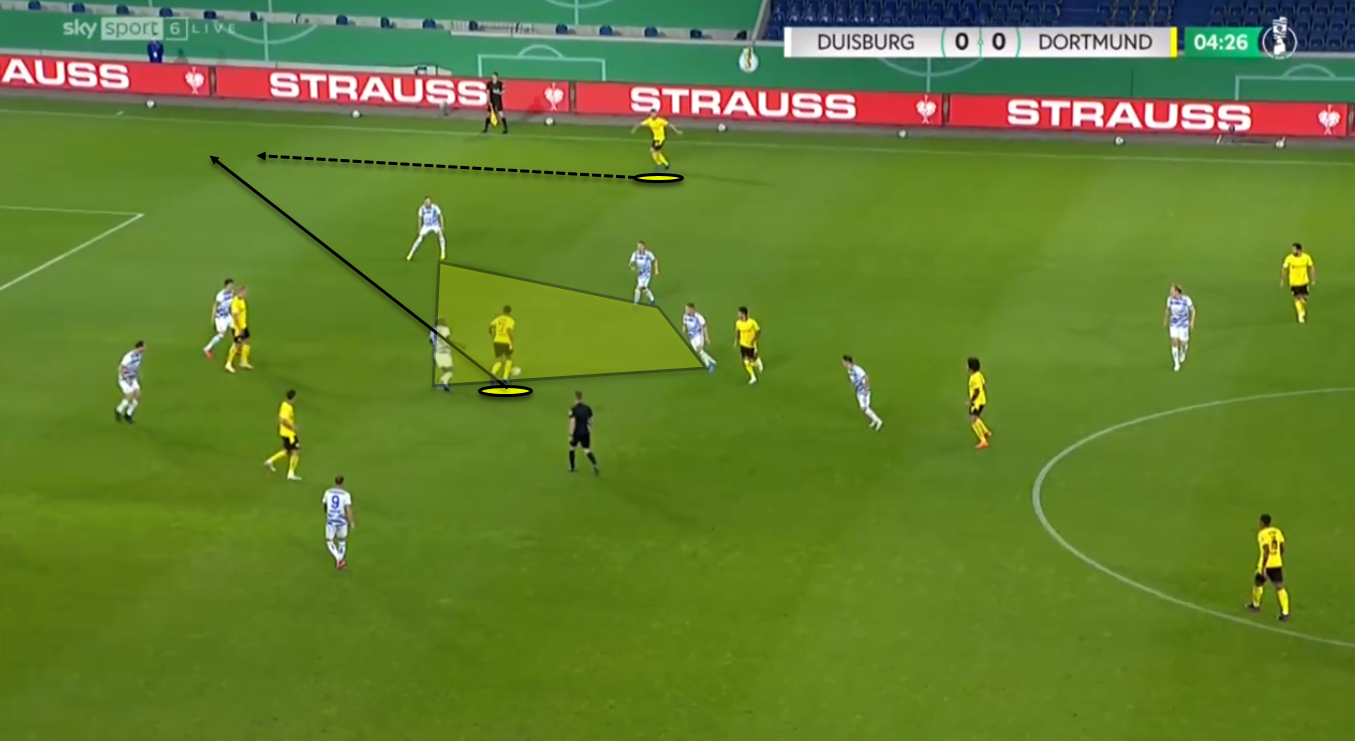 Jude Bellingham is a midfielder player who can do it all. He is strong defensively, a threat when progressing the ball and a creative threat in the final third. What is especially impressive, however, is that he has shown a willingness to put himself out of his comfort zone by moving to a new country where he will be exposed to a new culture and language.

Early signs are that Bellingham has adapted superbly well and he has already been accepted by his teammates as an equal in the first-team.

2021 is likely to be a year of development for Bellingham but there is no doubt that he will continue to impress and improve. 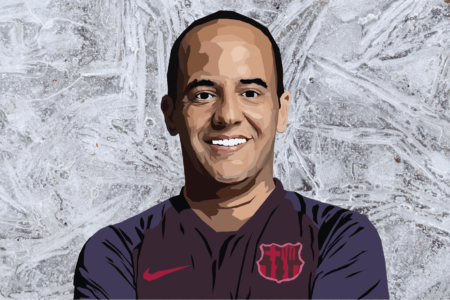 Lluis Cortes is the 34-year-old Head Coach of FC Barcelona Femini, and has been in this position since 2019, although […]