It’s not even two months since the Indian Super League began, but already many new signings have marked their footprints in Indian soil and have adapted well to conditions. Igor Angulo is one such player who is not only admired by the fans of FC Goa but also by the entire nation.

In this tactical analysis, which would be in form of a scout report we will be analysing his contribution so far with the help of data and will also be looking at why I claim Angulo to be the cleverest striker this season by analysing his tactics.

Igor Angulo, the 36-year-old Spaniard has a variety of experience as he has played in various leagues throughout his career. He has played for Athletic Bilbao in LaLiga and has also been part of European competitions such as the UEFA Cup and the Europa League qualifying stages. He has played for nine different clubs in his entire career including FC Goa, among which he has made the most number of appearances (154) for Górnik Zabrze in Poland. 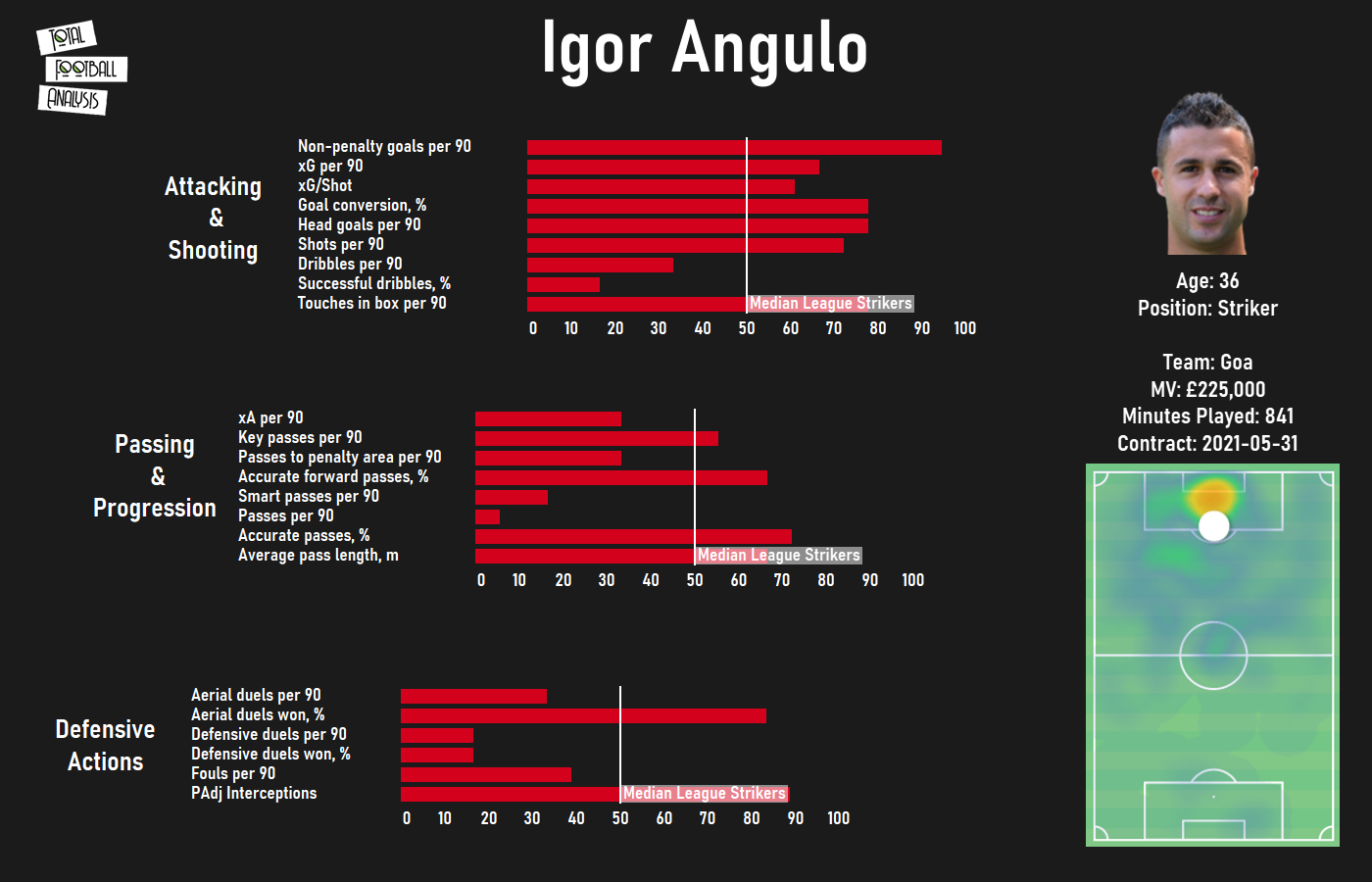 Looking at the player profile one can easily see that Angulo is a serious threat to any opponent when attacking. His passing and progression are quite average when compared to the other strikers in the league, but all that could only mean that Angulo loves to be at the receiving end to score rather than creating chances which is well supported by the fact that he’s the leading goal scorer in the ISL so far.

With such an extraordinary performance upfront, one shouldn’t worry about his defensive numbers, but Angulo performs equally well when without the ball by influencing the play with his off the ball movement which we will see later on.

Into the final phase of his career, Angulo has had a wonderful footballing career so far with no record of major injuries and won many awards such as the top scorer of the league and also was the striker of the year when in Poland, in the 2018/19 season.

In the upcoming analysis, we will only be looking at strikers who have played a minimum of 300 minutes. To be able to identify Angulo quickly in the upcoming visualisations, he is marked green while the remaining players are marked in shades of red. 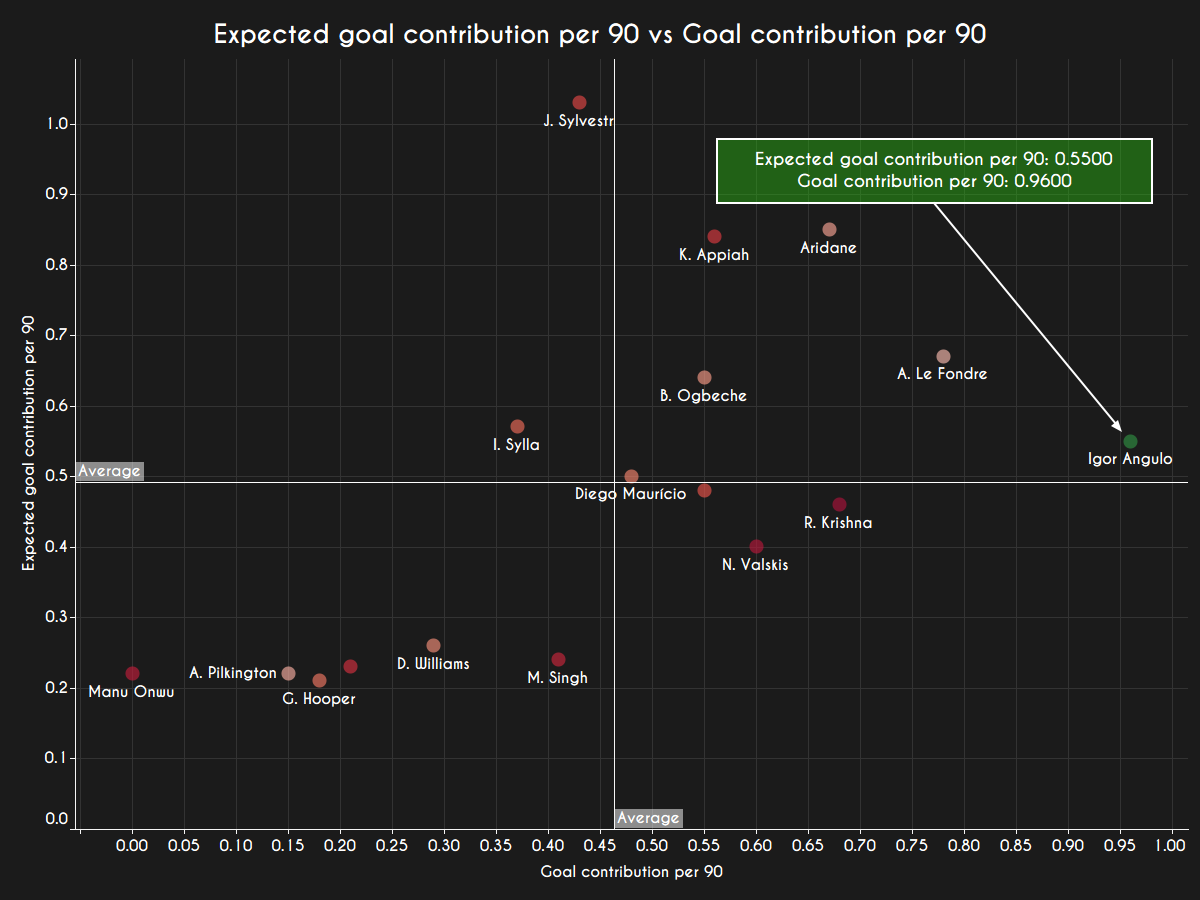 Next on the list would be how dangerous he is inside the box and his shot frequency. We would look at metrics such as touches in the box per 90 and shots per 90 which would be on the axes while the radius of the circle indicates the shot on target percentage. 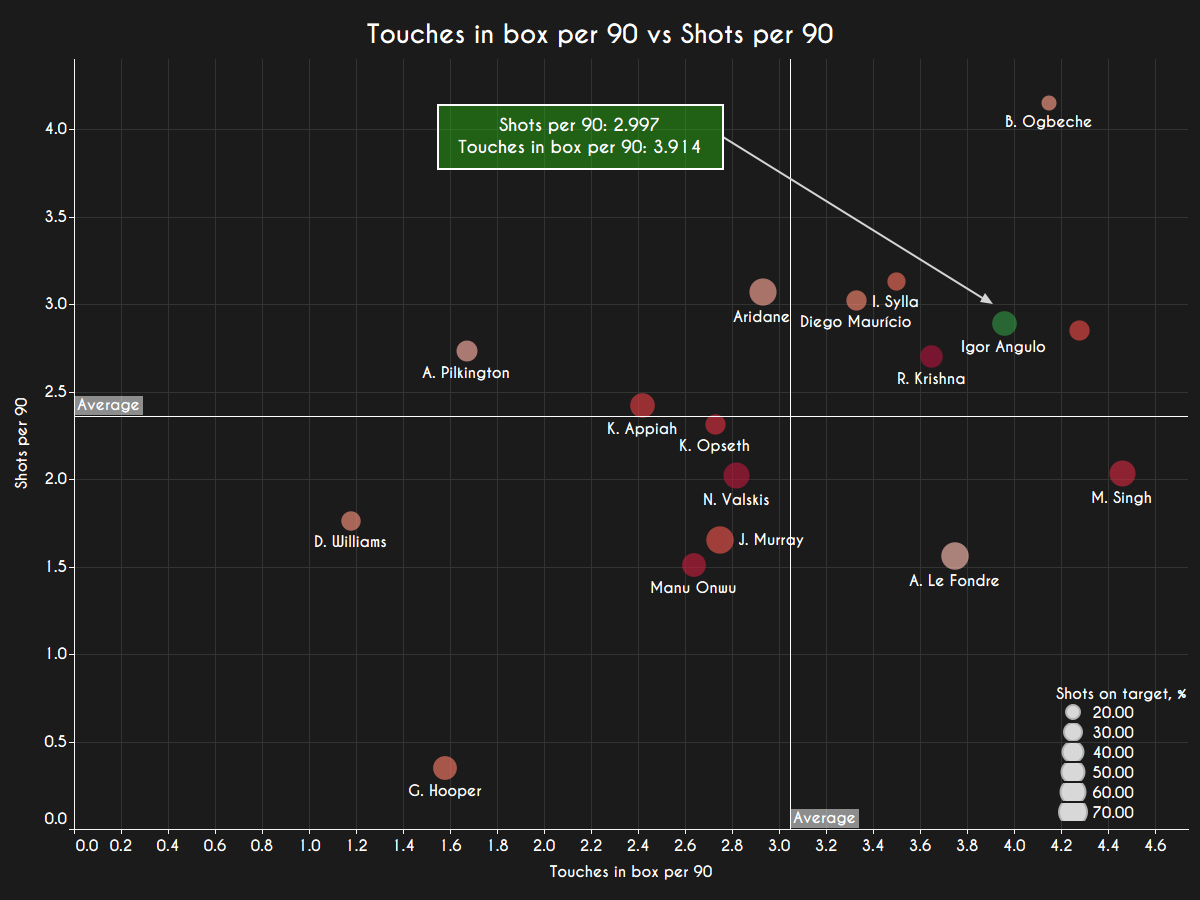 Angulo on average takes 3.91 touches in the box per 90 and takes 2.99 shots per 90. He is above average by a fair margin for both the metrics which only six players have managed to achieve. 55% of his shots are on the target making him very dangerous once inside the box. From the heatmap in his player profile, we can also notice that his movement is usually in and around the box explaining his positional play.

In the two previous scatter plots, we have analysed his performance so far based on data, but one question that would arise is, what influences these stats? Now we will be answering such questions on how he’s so successful and ahead of so many other fellow strikers and what makes him different. We will also analyse his unique attacking traits which makes him the cleverest player this season.

What makes him the cleverest striker?

#1 Positioning at the time of attacking

For a player like Angulo experience is everything. Over the years, by playing in different leagues with different players, he has mastered the attribute of being positioned intelligently at the time of attacking. The reason why I deem this to be his vital attribute is that he isn’t very fast in general. His quick sprints are good but he isn’t the type of player who can take on many players and sprint past them.

Often strikers are found to stick to the last defender’s shoulder and make runs to meet through balls which is not the case with Angulo. He positions himself diagonally to the ball possessor and away and in-line with the opponent’s centre-back. But why? With the complete concentration of the defenders being on the ball, they fail to notice someone far away from them. Defenders often get the sense of relief that there’s no one around but Angulo is always there to make those runs.

This not only helps him to go unnoticed but also gives him enough space and time to control the ball and take decisions. 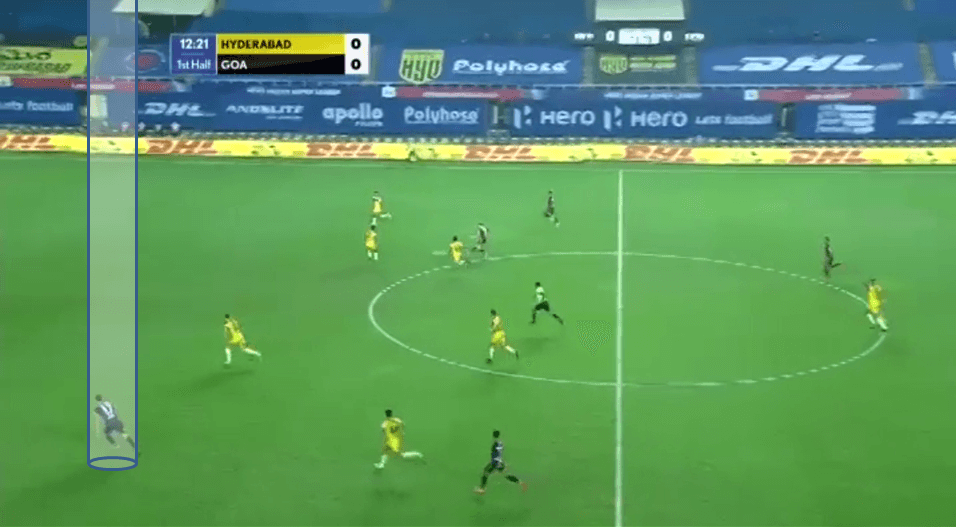 In this picture, we can see a run by Angulo behind Hyderabad’s defender while the ball possessor is trying to pass it through the gap in the middle. Such situations put extreme pressure on the defence of any team. If Hyderabad’s defender moves inside trying to close the gap to avoid the through balls, then the ball could be passed to Angulo through the air. Being unmarked would give him an ample amount of time to control the ball and progress.

But if the defender decides to stay close to Angulo just like the above picture it would still create a gap in the middle and the through ball if timed perfectly could reach Angulo quite comfortably. His clever positioning is the reason for such a match situation. If a defender decides to stick to him based on his positioning then it would lead to holes in the organisation given how wide Angulo operates and if the defender opts to maintain balance, then Angulo would go unnoticed basically indicating a win for him in either situation.

His greatest asset I believe is the fact that he puts pressure on defenders and weakens their decision making and takes advantage of such situations. Runs from the defender’s blindspot is another asset which isn’t widely spoken about. 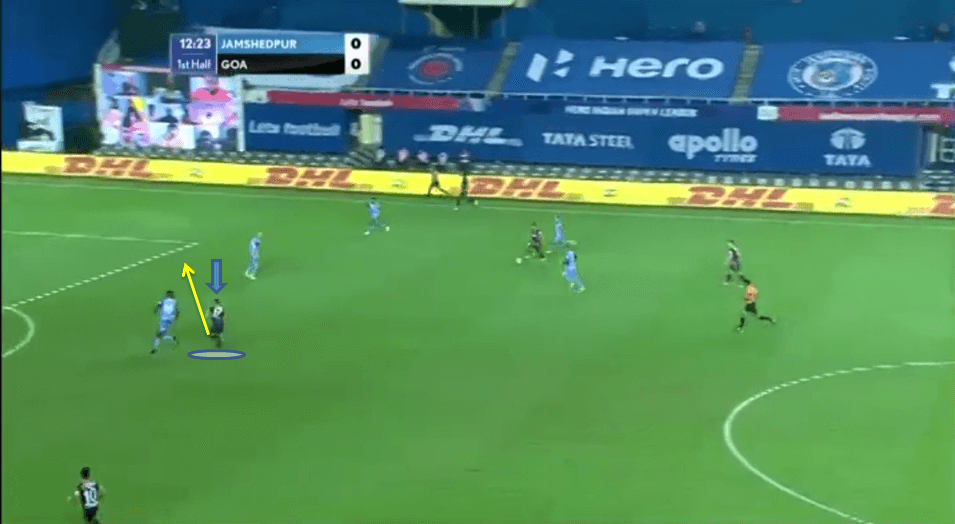 We all must have heard about blindspots of attackers which is a term often referred to when defenders try to win or recover the ball from the ball possessor. Similar to that, a defender too has a blind spot which can be exploited if there’s a lack of communication between the defenders. From the picture, we can see Angulo making a diagonal run from behind the defender to in front of him. The reason why he cuts inside is to avoid the off-side call but runs like these also take the defender by surprise.

These runs come in the least expected moments for the defender as he thinks there is no one around him. In such situations, the defender’s decision making is put to the test. This results in defensive errors which would later be capitalised on by the attacking team.

When I say decision making, I mean his ability to decide quickly and react in intense moments of the game. His decision making is so strong that four out of his nine goals so far have been scored during stoppage time which is when players are tired and tend to make bad decisions and mistakes. 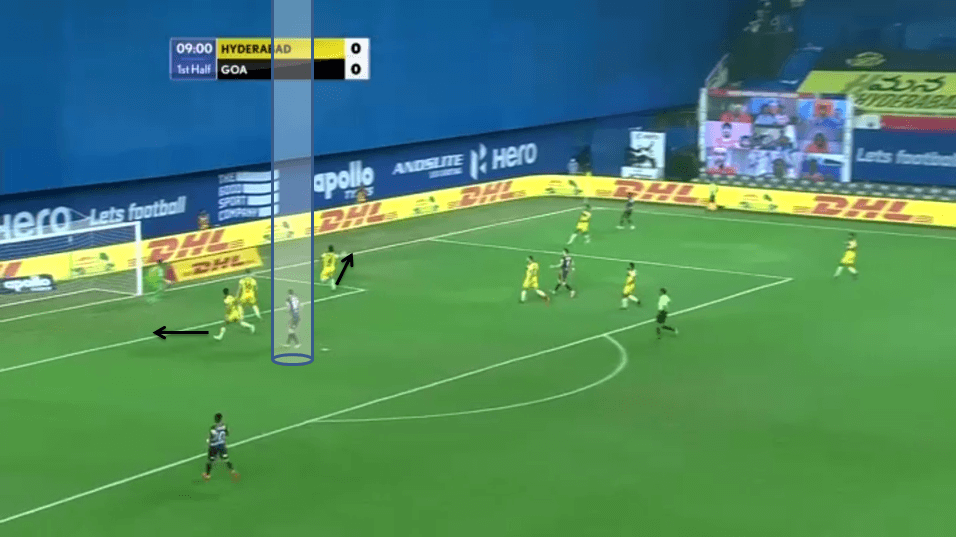 His decision making helps him to be unpredictable. At the time of the cross, he sprints towards the goal attracting several defenders with him, but in the last second, he decides to withdraw which helps him to not only escape the defenders but also creates space for him right in front of the goal. The defenders have their eyes on the ball and fail to notice that Angulo has halted his run; they continue sprinting, giving him space in a very dangerous position.

When he is man-marked, or if he’s forced to run into a defender, Angulo manages to escape their attention by being unpredictable in his movement. 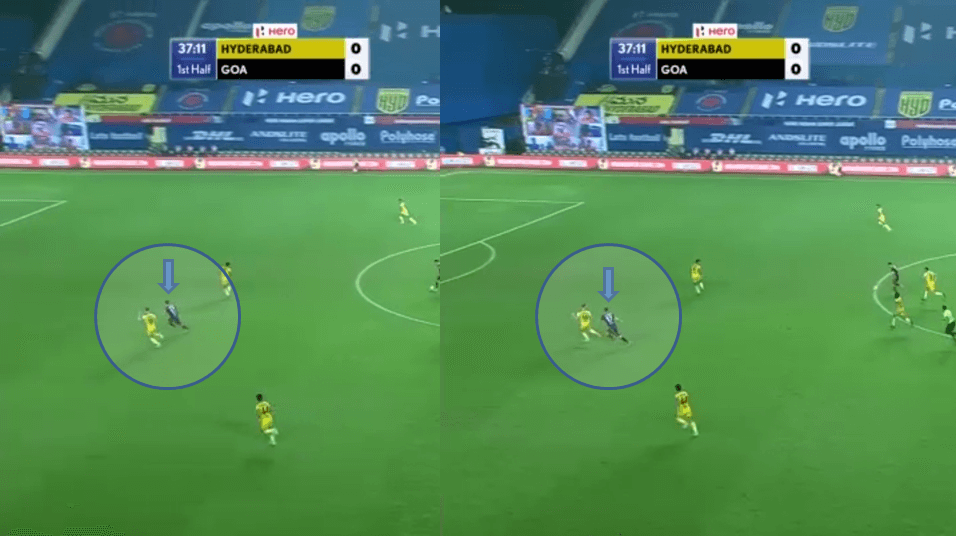 From this picture, we can see a defender running along with Angulo and at the same time trying to maintain the balance and shape of the defence. It’s only when Angulo decides to change direction and puts pressure on the defender nearby and accelerates when the ball is passed to him.

Angulo’s defensive numbers are not the best, but in reality, it is his off the ball movement which plays a very big role in the team’s initial defending. As soon as the team loses possession in the attacking third, Angulo’s main role is to block the nearest passing lane while the midfielders act as a hindrance to progress the ball and force the opposition to find an option in their defending third itself. It’s these options that Angulo blocks, intensifying the pressure on the ball possessor. 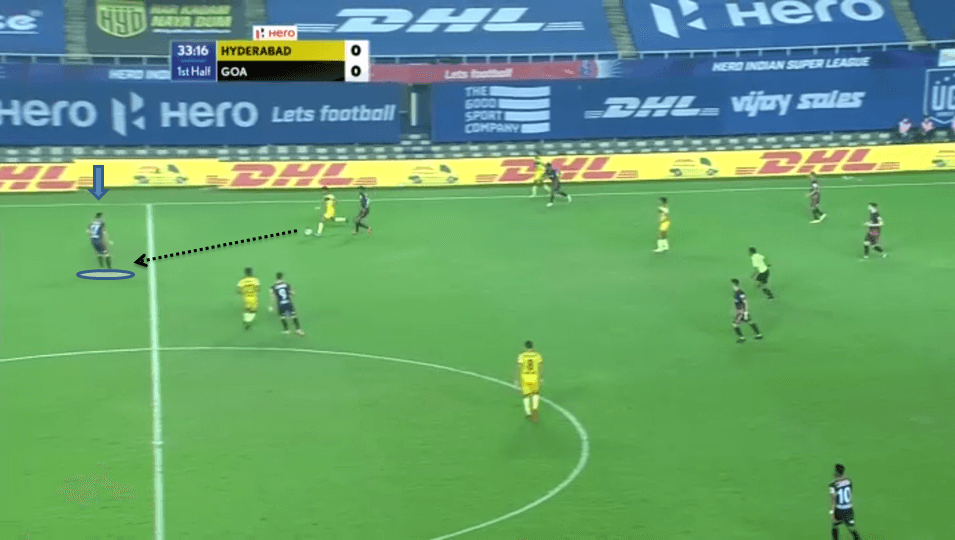 This match is an example of Angulo’s vital role in ball recovery in the defensive phase of the game. His experience helps him read the game and he positions himself accordingly. Although his defensive stats are below average, we can see that he has performed well for possession adjusted interceptions (4.19 per 90).

He also plays an active role while defending corners and is quite strong in aerial duels. He involves himself in fewer aerial duels but sees success in a majority of his involvements.

The above-discussed examples are a few of his traits which I personally admire and think makes him the cleverest striker this season. There are still a lot more of his traits which are beautiful to watch and notice. Angulo who is in the final phase of his career has a wealth of experience, having played all over the world, and it is this knowledge that the local Indian players can use to their advantage in their own careers, by watching and learning.

Will he go on to win the golden boot is a question that I can’t answer, but something I’m confident about is him going on to score more and more match-winning goals for Goa.