As a player, Roberto De Zerbi was a journeyman. He started off in the AC Milan youth academy, before leaving to play for 11 other Italian clubs, including his most successful spell, which came at Napoli. Two short stints in Romania followed with CFR Cluj, before a return to Italy with Trento before his retirement in 2013. Almost immediately, he started his coaching career in Serie D with Darfo Boario. After spells at Foggia and Palermo, he led Benevento to Serie A. Despite relegation in his first top-flight season, De Zerbi gained attention for his footballing philosophy, and it was not long until a bigger club made an offer,

In this tactical analysis, I’ll take a look at De Zerbi‘s fascinating tactics at Sassuolo this season.

When analysing a team, data can give you a good idea on their style of play before watching them. In the case of Sassuolo, there are some interesting metrics which can give us an indication of how De Zerbi’s coaching has affected their play. All of the following statistics were taken at the time of writing, after Sassuolo’s 3-3 draw with Hellas Verona.

The first metric I’ll take a look at is xG and xGA, as well as how their xPTS value is affected by these. Sassuolo’s xG this season is 39.12, they have scored 48, which is an overperformance of 8.88. Their xGA is 49.24, while De Zerbi’s side have conceded 49, so they have not overperformed nor underperformed defensively xG wise. Sassuolo are also very close to their xPTS value, which is 33.5, while their actual points are 34.

Sassuolo’s PPDA this season is 9.43, which is slightly more aggressive than the average in Serie A: 9.45. Sassuolo average 53% possession this season, which is on the higher side, especially when compared to other clubs in similar league positions. Sassuolo’s PPDA and possession statistics tell us that Sassuolo defend in a similar fashion statistically to other sides in mid-table, but attack in a more possession dominant manner. This is reaffirmed when looking at offensive construction statistics.

The most obvious stat to look to first is the average number of passes played per 90. Sassuolo are fourth in this, playing 477 passes per 90, while the average is 401. Sassuolo are much less direct than sides near to them in the table. They average 33.14 long passes per 90, the lowest in the league. For comparison, the average for Serie A this season is 40.67. We can also see that Sassuolo pass the ball at a much higher rate than average. Their average passes per minute of possession this season is 15.5, only behind Napoli and Juventus. One of the more interesting offensive statistics is that Sassuolo only attempt 10.7 crosses per 90, the lowest in the league. The average is 15.65. 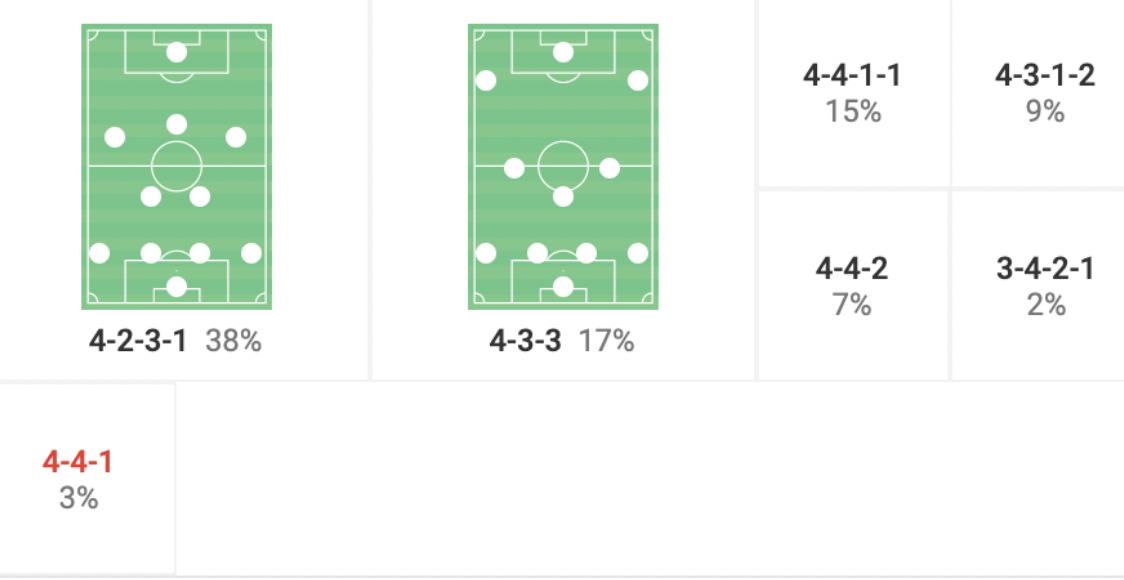 Within their preferred 4-2-3-1, Sassuolo tend to use consistent starting lineups, with their most common lineup so far this season pictured in the image shown below. 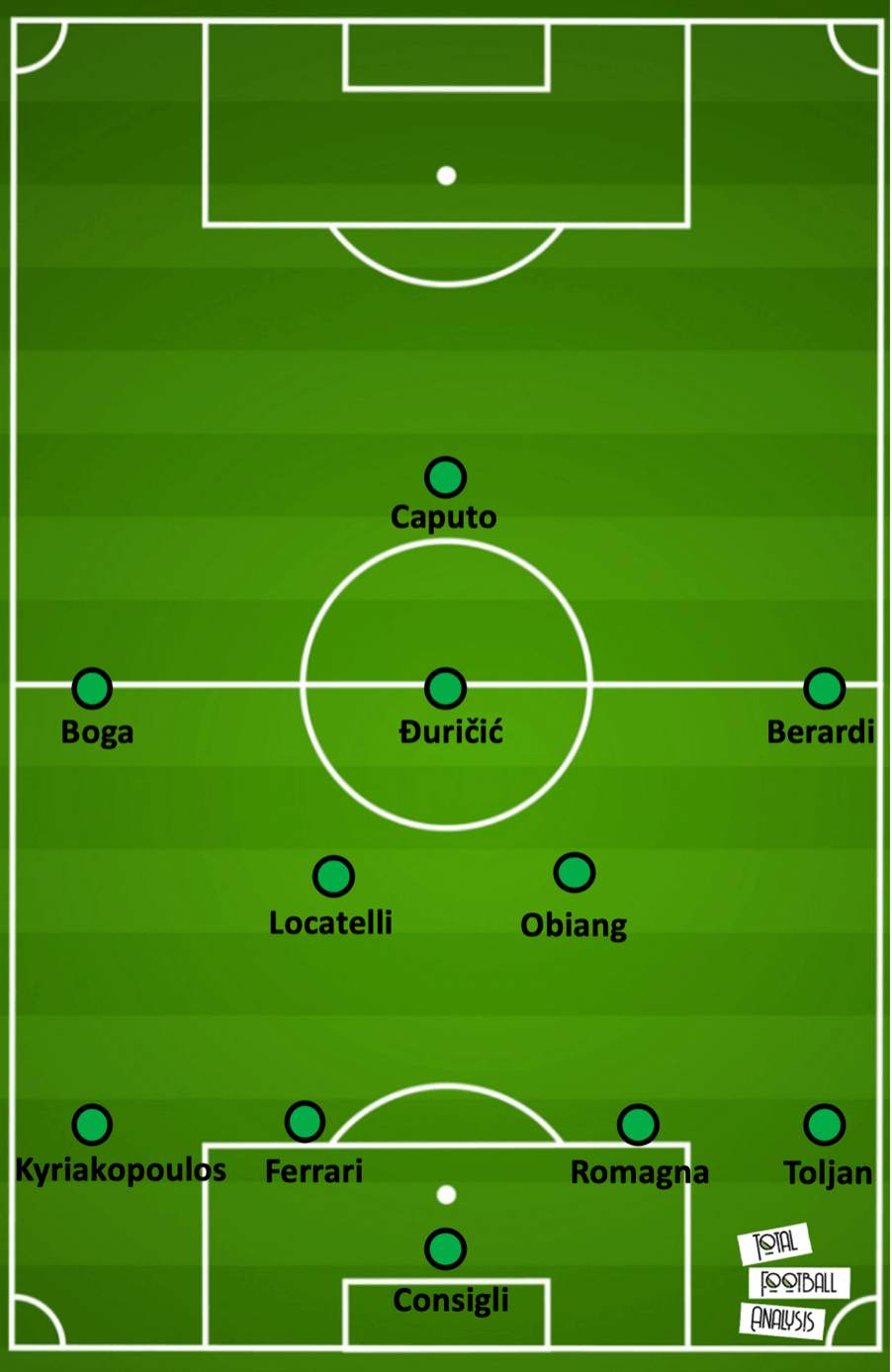 The transition from the starting 4-2-3-1 to the 4-4-2 out of possession is the most common transition between the two shapes. The two wingers drop off, in line with the double pivot, while the attacking midfielder steps up alongside the centre forward.

In the image shown below, we can see Sassuolo set up in a 4-4-2, which is used mainly against teams that look to dominate possession.

The 4-1-4-1 defensive shape is effective when the opponent is utilising a double pivot, as the two central players in the second line of four can cut out the passing lane to the opponent’s pivot. The transition from the 4-2-3-1 involves one of the pivots staying behind while the other pushes up. The attacking midfielder and both wingers drop in line with said pivot player, as seen in the image shown below. 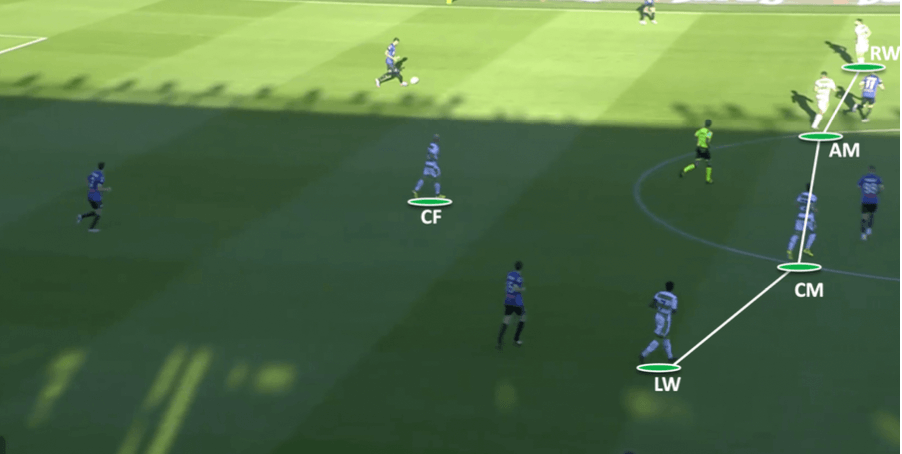 The 4-2-3-1 defensive shape is more used when Sassuolo look to press their opponents more aggressively. The double pivot making of the third line stays compact vertically with the second line, making it more difficult for their opponents to play penetrative passes.The more advanced positioning of the wingers allows Sassuolo to press in wide areas (their preferred area to press their opponent) more effectively. In the image below, we can see Sassuolo’s 4-2-3-1 defensive shape, with the double pivot maintaining compactness.

Sassuolo’s primary pressing trigger is when the opponent play into their fullback, wingback or wide centre back. When this happens, the winger on the nearside will jump out to press. If needed, the Sassuolo fullback will push up to cut out the passing angle to the opposing player in a wide and high position. In the image below, we can see an example of this pressing trigger. The ball is played out wide, and the left winger presses, forcing the opponent player to immediately return the pass, after which the winger returns to his starting position in the defensive shape, a 4-4-2 in this case vs Roma.

Sassulo do not try to dominate possession against top sides like they do to other mid table sides or below. Rather, they will sit in their mid block shape (usually the 4-4-2 mentioned previously) and look to score from counter attacks. When the ball is won in an advanced position, the front four (both wingers, the centre forward and the attacking midfielder) will all look to make runs in behind.  In the image shown below, we can see an example of an excellent offensive transition. The ball has been won in an advanced position, and runs are made in behind which lead to a goal scored.

Sassuolo’s defensive transitions are arguably their weakest phase of play. Due to their offensive organisation, (particularly in advanced areas of the pitch, where the fullbacks have pushed up) gaps are often created in their defensive line, where their opponent can punish them. We can see an example of this in the example pictured below. Sassuolo’s fullbacks are out of position, leaving gaps in those positions which leave just the two centre backs to defend the counter attack.

Role of the pivot players in possession

Sassuolo average 56% possession per game, the fourth-highest in Serie A. They boast the third-highest passing accuracy in the league, with 87%. Sassuolo are a statistical and tactical anomaly when it comes to their offensive play, unlike most mid-table teams, they are a possession-based side. Out of Europe’s top five leagues, they play long passes the second least – ahead of only Paris Saint-Germain. We can see their top passing links by position in the image below. 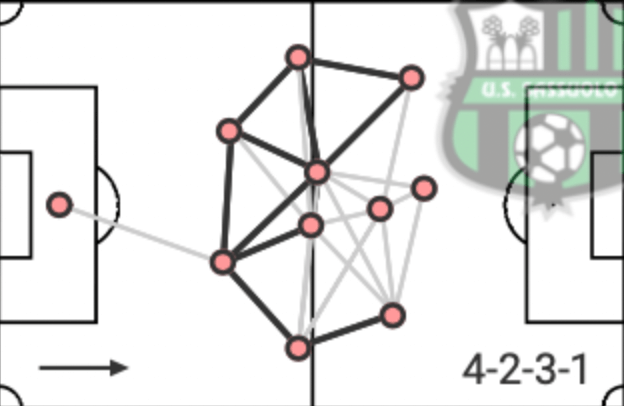 The standout player is the left sided central midfielder – usually Manuel Locatelli. He has the attributes needed for a midfielder in a possession-based team, and is particularly important in their build-up play.

Sassuolo tend to play out from the back, when they do, their 4-2-3-1 shape remains mostly intact. The fullbacks stay deep while the wingers stay high and wide. The “back six” of the 4-2-3-1 (the back four and the double pivot) are the important players in the first phase of Sassuolo’s possession. The central midfielders stay relatively deep and create a box shape just ahead of the centre backs. 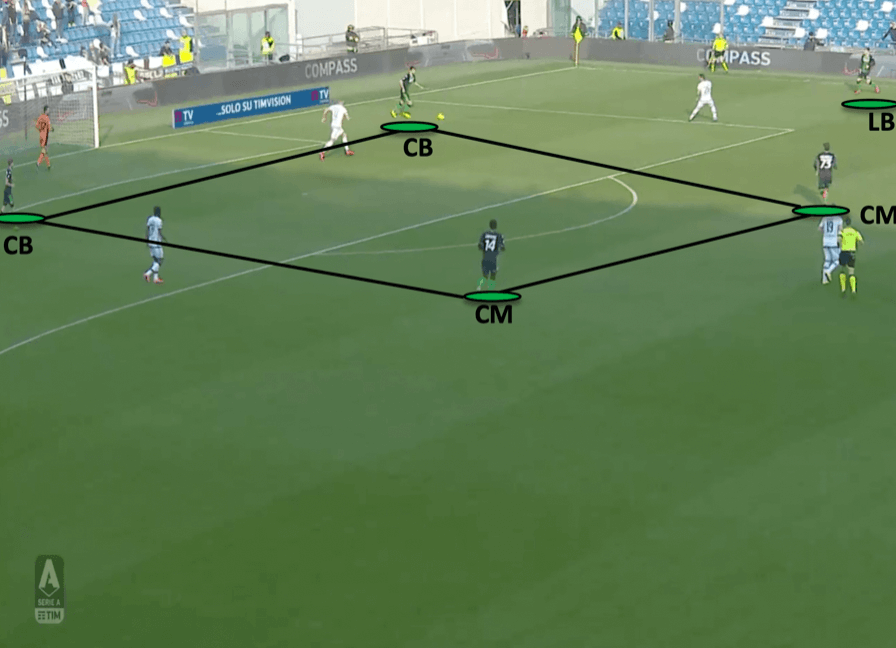 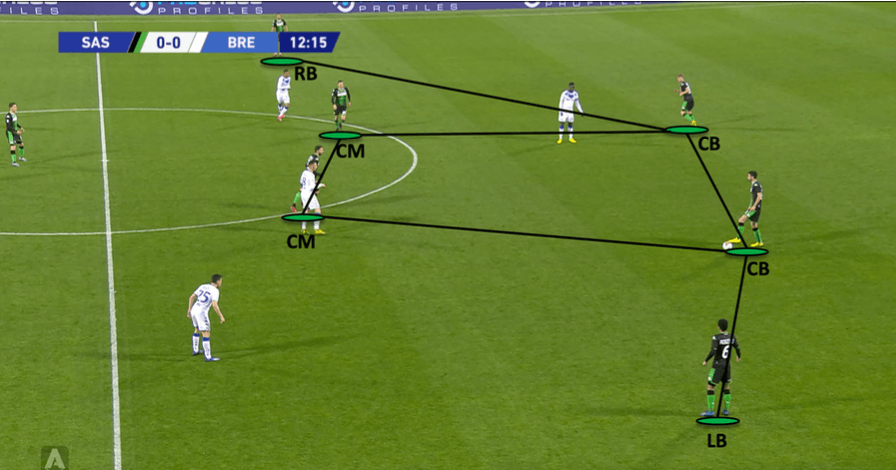 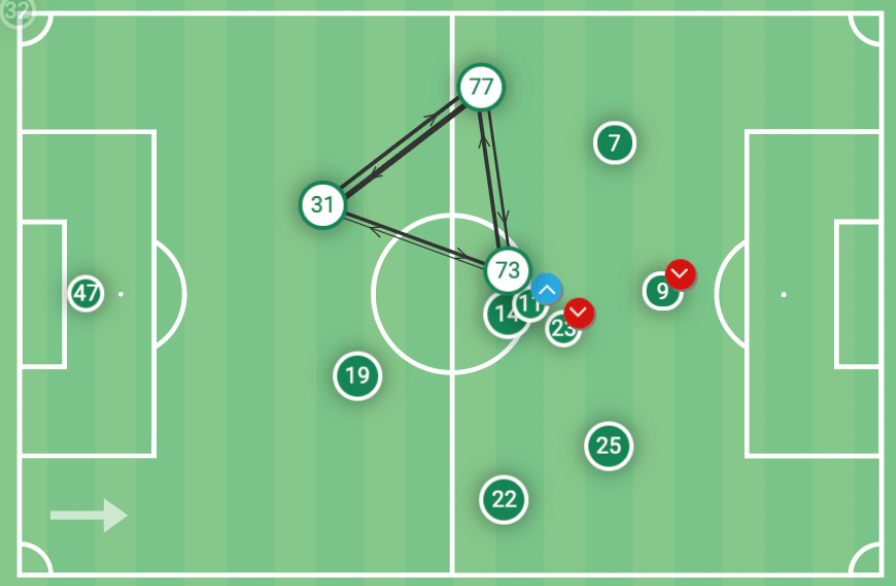 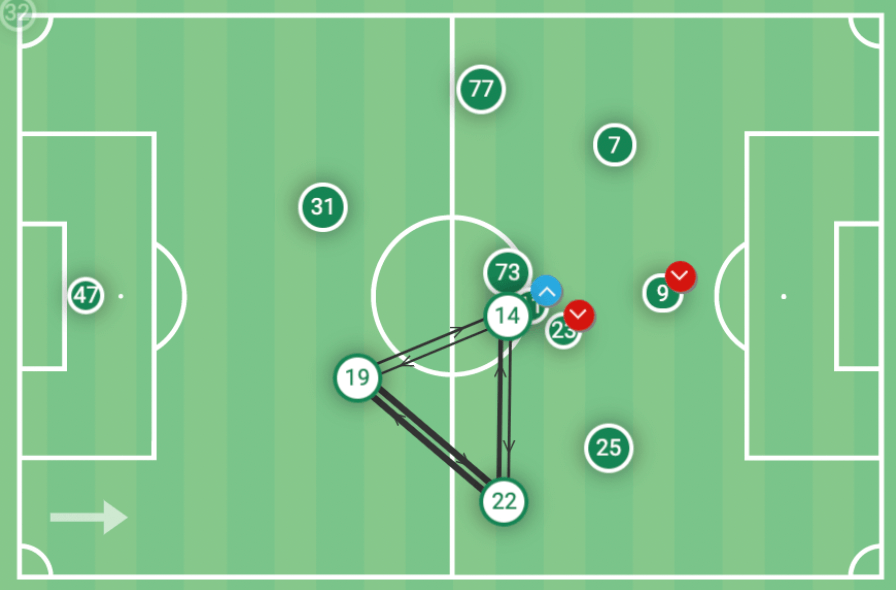 When one of the pivot players receives the ball, they tend to circulate possession slowly, usually with the surrounding players as seen in the pass maps shown above. When possible, the central midfielders will occupy space in between the opponent’s lines, as shown in the example below. 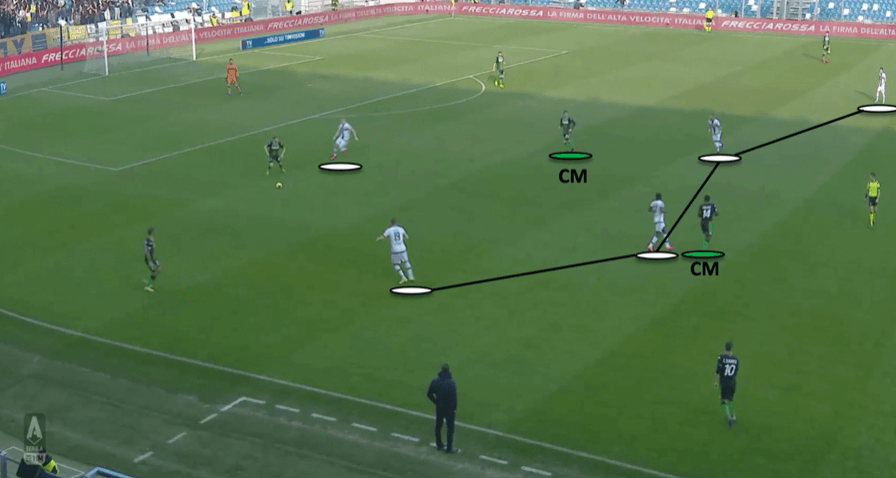 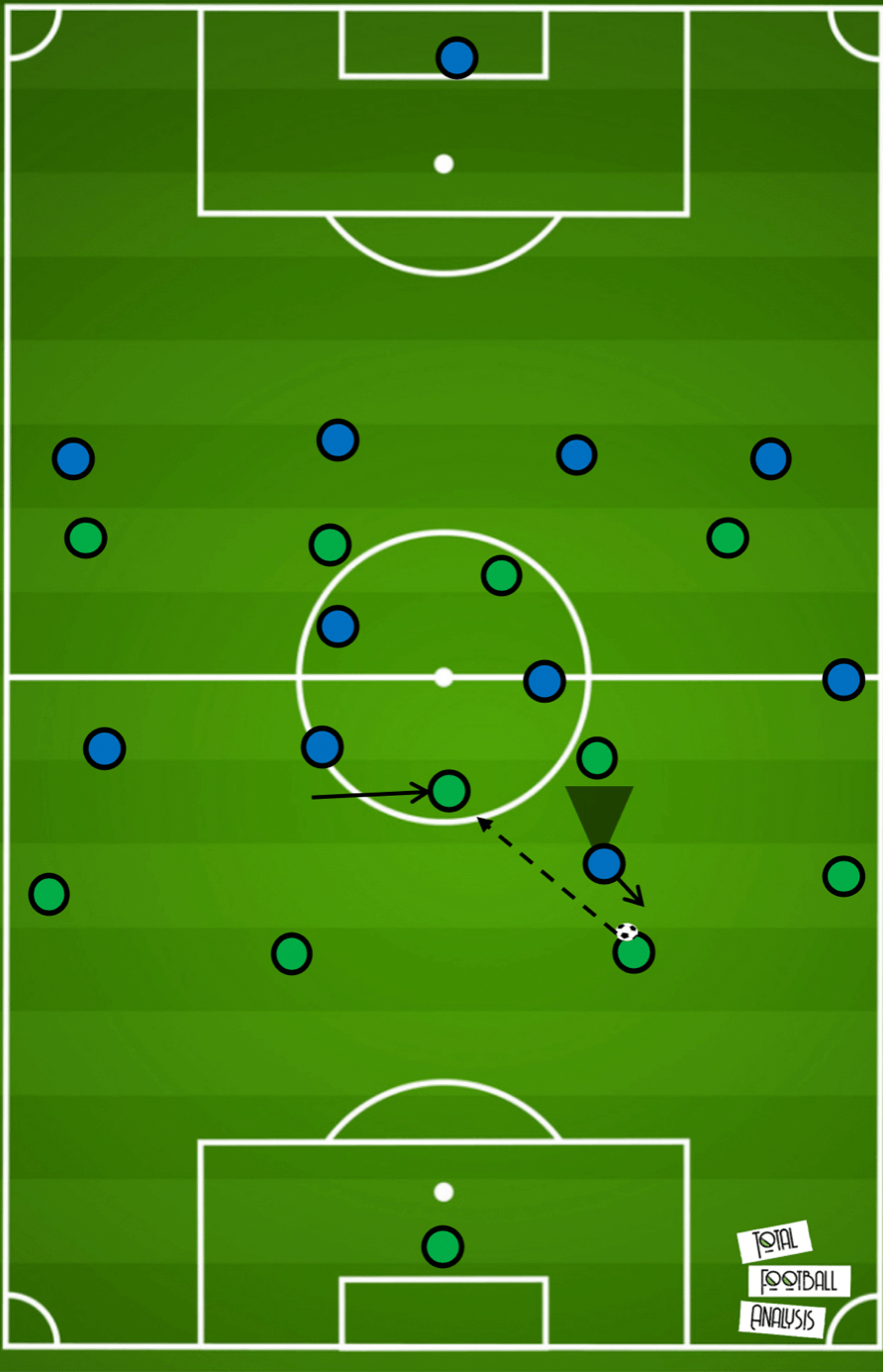 We can see this in the image shown below. The Torino player is pressing the ball-carrying centre back, so the central midfielder on the far side shifts across to provide a passing option. 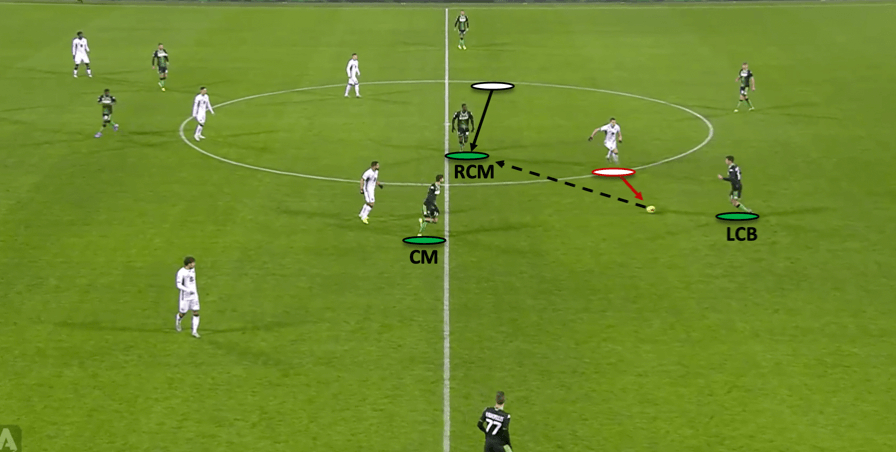 After looking at Sassuolo’s offensive shape and how it favours the halfspaces and wings, it comes as no surprise that they tend to attack mainly down the wide areas, with 71% of their play coming down either flank.

The role of the fullbacks in possession is to circulate the ball laterally and to progress the ball to the wingers. When the ball is played to the fullback, the winger on the near side will drop deeper to provide a passing option, while the attacking midfielder will either overlap or shift. 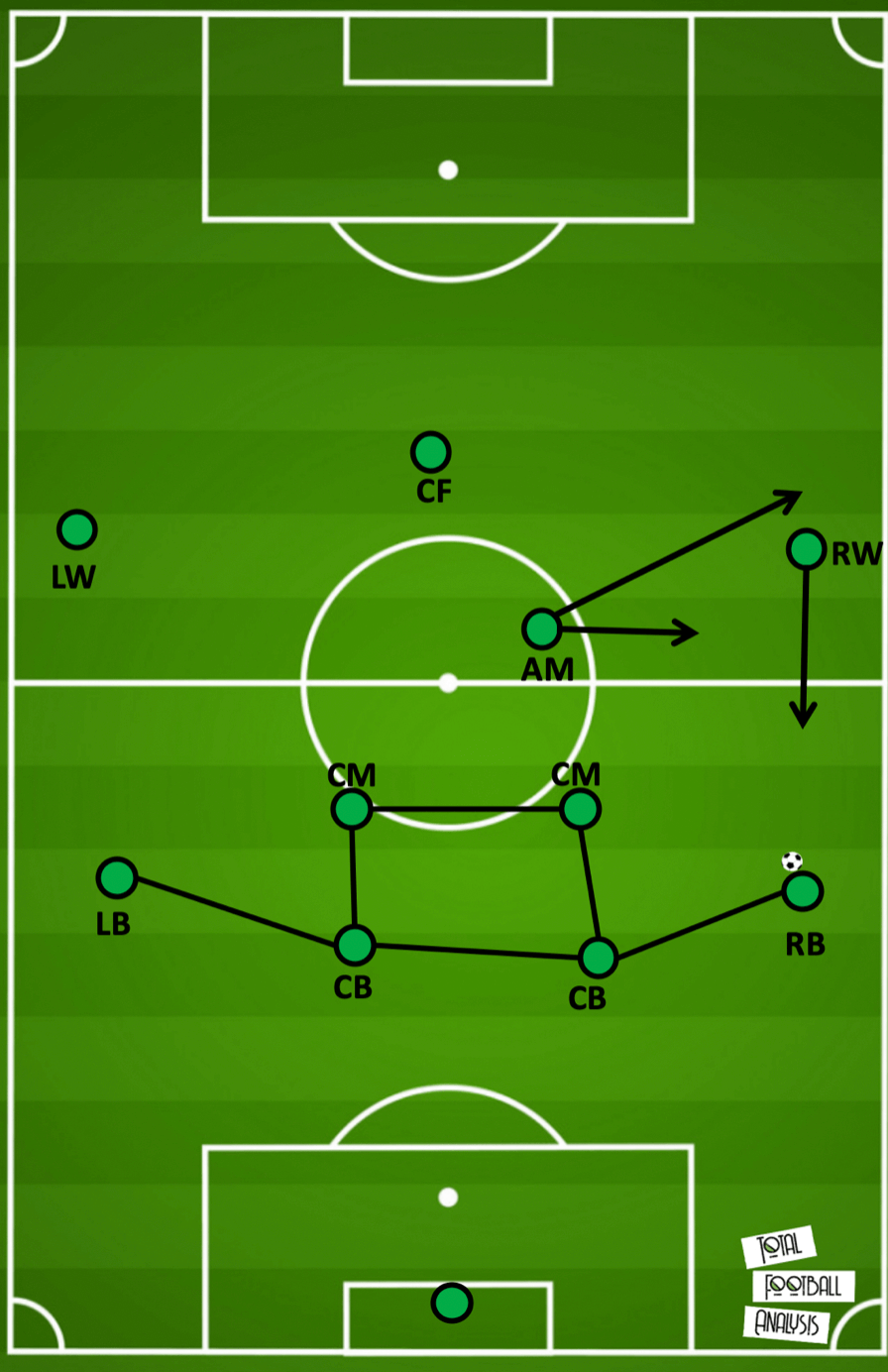 Despite a large portion of their offensive play originally coming down the wings, Sassuolo cross the least out of any Serie A side. Instead, they change their fullback-winger dynamic when in the middle and final third. Instead of the wingers staying wide while the fullbacks stay deep, the fullback will overlap into the wide area while the winger will tuck into the halfspace in a typical modern fashion. We can see this happen in the example pictured below. As Sassuolo advance into the final third, the winger tucks into the halfspace while the fullback overlaps and provides width. 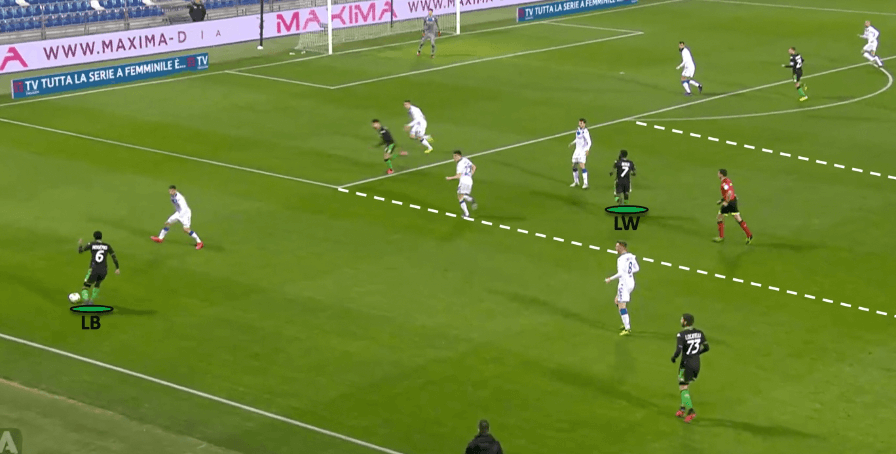 When looking at the Serie A table over the past few seasons, one could easily assume that Sassuolo are just a typical mid table team, but this could not be further from the truth. I Neroverdi have a concrete philosophy under De Zerbi, and are one of Serie A’s most tactically interesting teams. With De Zerbi at the helm, Sassuolo have become one of the most exciting teams, particularly in their offensive phases. Their excellent offensive dynamics are up there with the competition’s best, and their shaky defence at times is the main weakness stopping Sassuolo from challenging higher up the table.