The increased pace of the game has forced goalkeepers to become more creative with their shot-stopping tactics. David de Gea, who was at one point seen as the best goalkeeper in the world, is renowned for pulling off miraculous saves with his feet. While many of the Spaniard’s incredible saves can look like last ditch efforts to throw his body in the way of shots, there is much more technique involved than what first meets the eye. Techniques, such as the lateral split save, have origins from football’s sister sport, futsal.

Another one of these techniques is the block save, also known as the ‘K’ save. This tactical analysis will briefly explain the block save and provide the readers with the resources needed to successfully coach this technique.

What is the block save?

The block save is a technique used by goalkeepers during 1v1 scenarios when there is little opportunity for the goalkeeper to win possession of the ball. What I mean by this is that the goalkeeper is unlikely to win the ball outright and retain possession for his team, by successfully catching the ball when making the save. The objective of the block save is to simply position their body between the shooter and the net as effectively as possible.

As he was mentioned before, De Gea is a perfect example to look at. During last season’s incredible performance against Tottenham Hotspur, Manchester United’s shot-stopper utilised a plethora of different futsal techniques to deny Mauricio Pochettino’s men. In the 65th minute, De Gea found himself 1v1 with an oncoming Dele Alli. 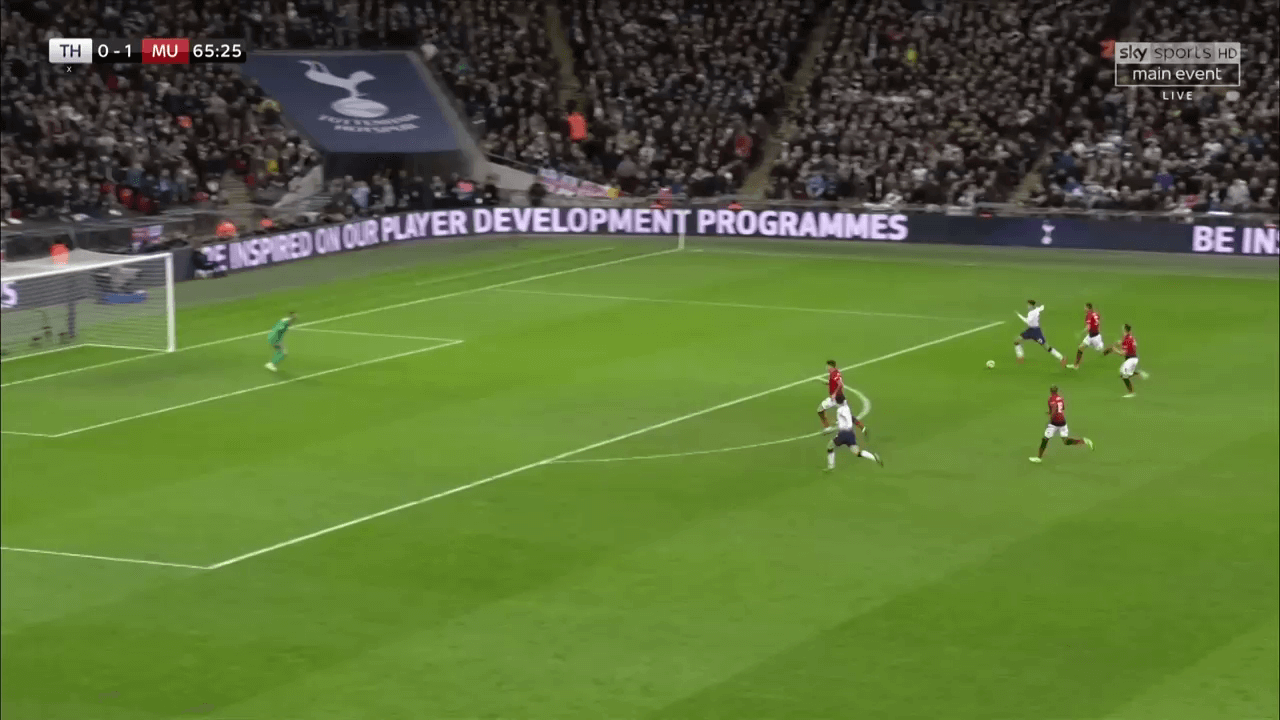 As Alli’s approach brings him closer to the goal, De Gea would have been looking for one of two things. The first thing would be a heavy touch from Alli. Had the Tottenham midfielder taken a heavy touch out of his feet, there may have been an opportunity for the goalkeeper to come off his line and win the ball with his hands.

The second thing De Gea would have been looking for was an indication that Alli was getting ready to shoot. As the Englishman put his head down to shoot, De Dea reacted by getting into the block save stance. 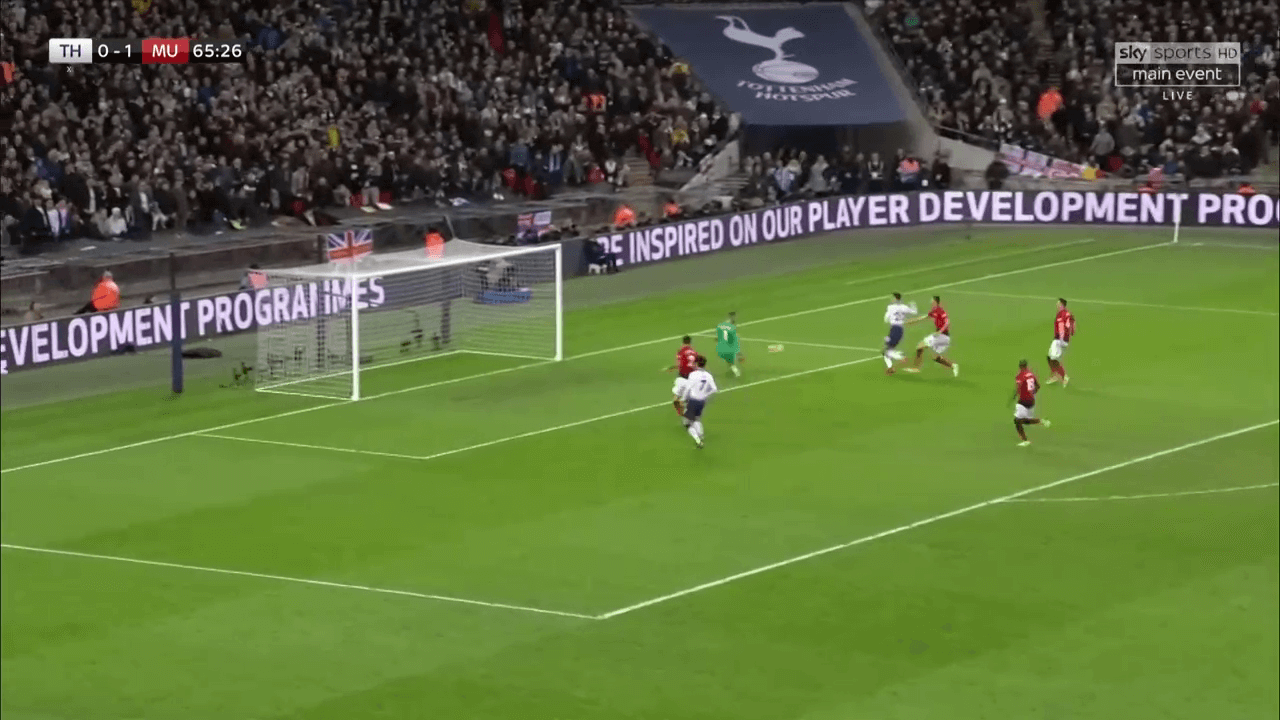 Let’s take a look at De Gea’s shape from a different angle. From behind we can see all the elements of a good block save. The knee closest to the near post is up, the trailing leg is closing the gap between his legs and he is keeping a relatively flat chest which is perpendicular to the shooter. 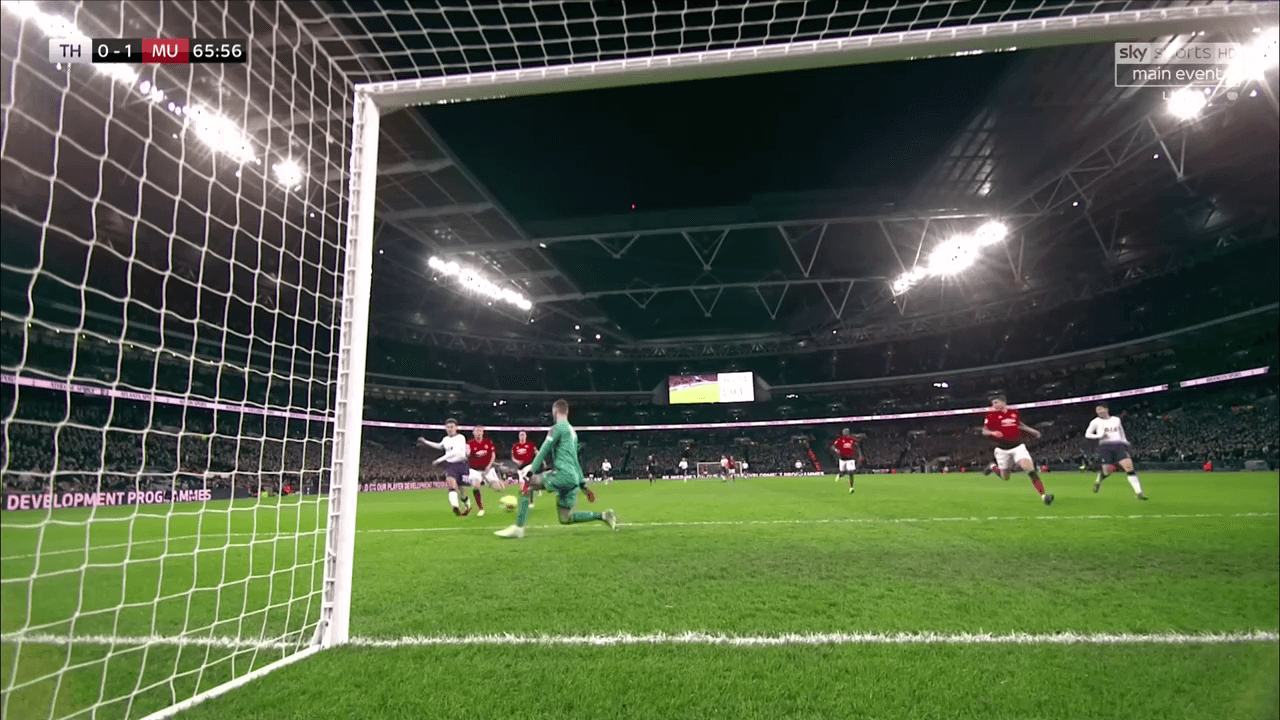 We can see De Gea utilising the same technique against Manchester City. Instead of dropping his right knee, as he did against Tottenham, he drops his left knee. This is for two reasons. Firstly, he is travelling to his right, and dropping his left knee is much more naturally. Secondly, De Gea wants to take away the near post shot. 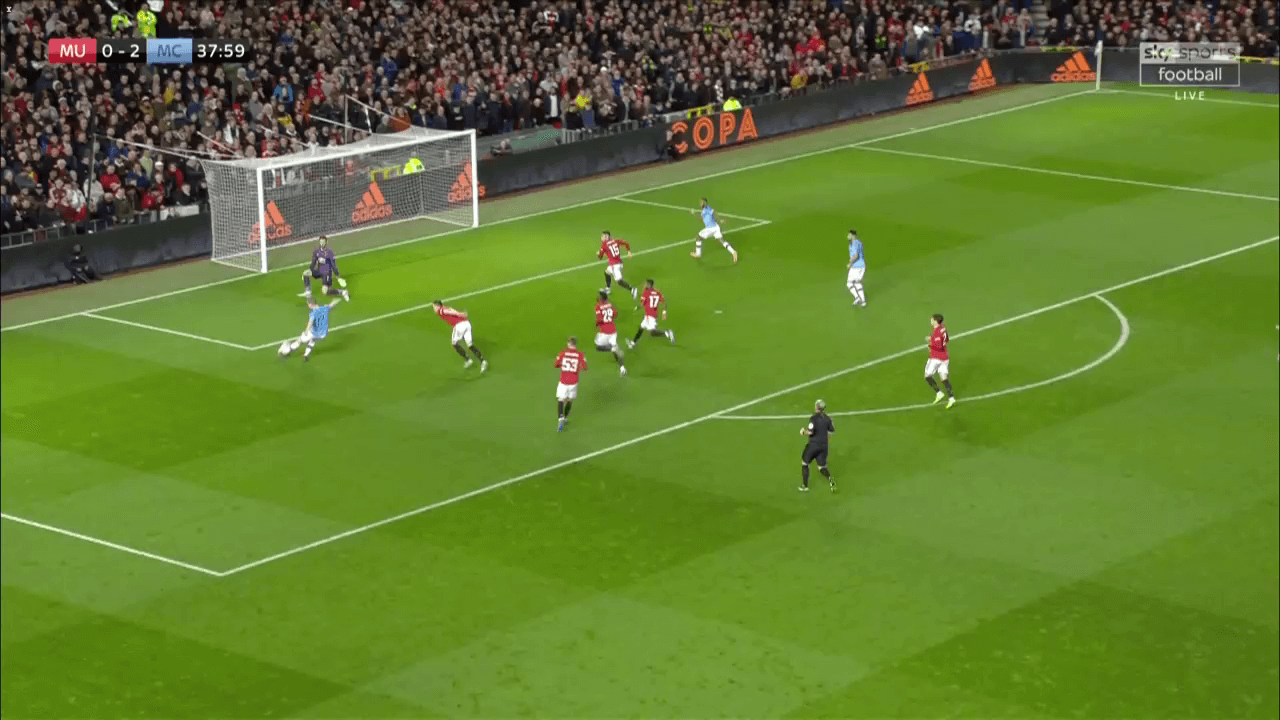 Kevin De Bruyne opts to shoot across the face of goal, however, De Gea makes the save with his trailing leg. It may appear as if there is a copious amount of the net for De Bruyne to shoot at. But if we look at the frame right before the Belgian shoots we can see how much bigger De Gea makes himself by utilising the blocking technique. 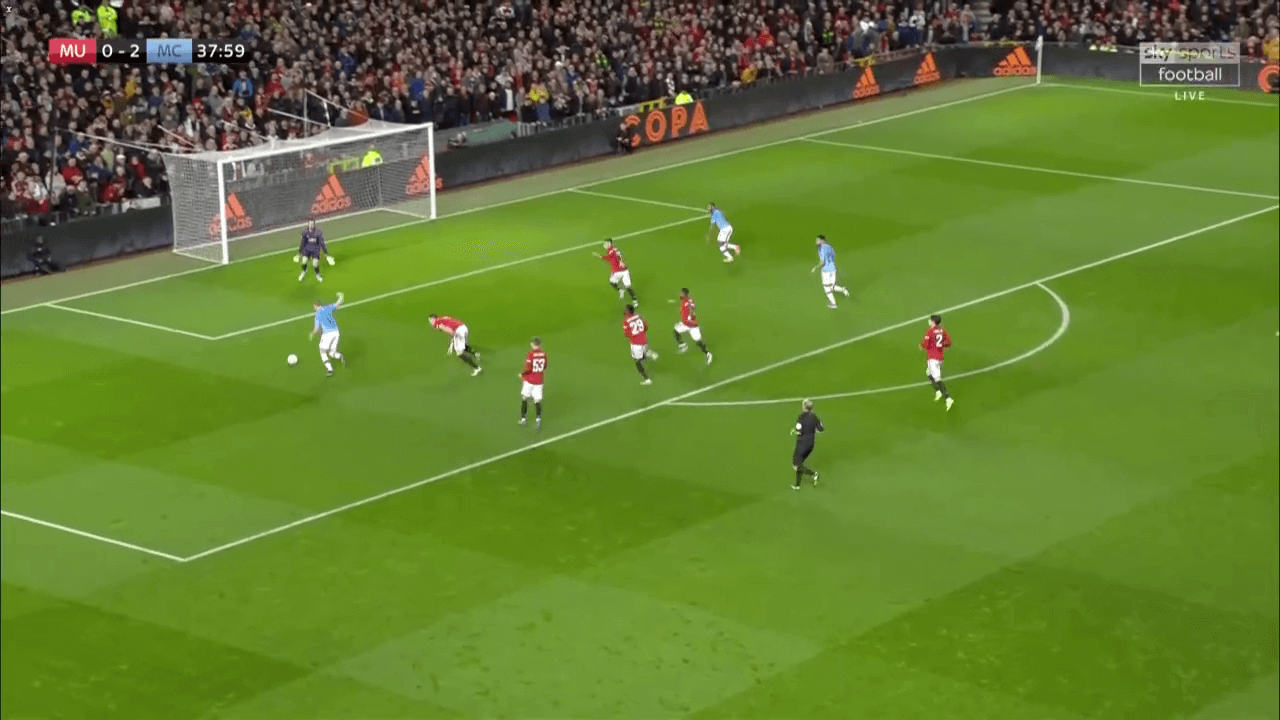 The goalkeeper’s approach isn’t as simple as just setting themselves in the middle of the net. The approach to their set position is equally as important. While it may not be utilised by every goalkeeper in every situation, a curved approach can improve a goalkeeper’s chances of success.

When attempting to make a save, there is always a level of unpredictability as to where the shooter is aiming. A talented goalkeeper might be able to predict the target of a shooter by looking at the striker’s body position, however, there are other ways for a goalkeeper to control the predictability of the shooter.

When approaching the ball, a slightly curved run can take away a back post shot, giving the shooter a false belief that they must shoot at the near post. The goalkeeper can then, in theory, step into the path of the shooter and take away a near post shot at the last second. This kind of approach is especially useful when an attacker is making a run towards the net from an angle.

A curved approach is not always necessary, or useful. It depends on the distance and angle of the striker’s approach. A goalkeeper should only force the near sided shot if they are able to quickly and effectively step into the path of the shooter. I recommend encouraging this approach on close distance shots from the angle.

While the angle of approach is important, so is the speed of the approach. A goalkeeper must quickly close down the angle before getting into the appropriate set position. This is true whether the player is attempting to make the block save or attempt a traditional 1v1. A quick approach will also assist the goalkeeper if the shooter takes a heavy touch out of their feet.

How the goalkeeper is positioned during this encounter is very important. This section will outline the different aspects of the block save and why they are so important.

As mentioned above, the goalkeeper must ensure that they are positioned with one knee up, with the trailing leg tucked dropped to take away the space between their legs. Their trailing leg’s knee must not be planted on the ground, however. They must keep their arms spread out wide, pointed down, and must keep their chest perpendicular to the shooter. Let’s take a look at an effective block save stance below. 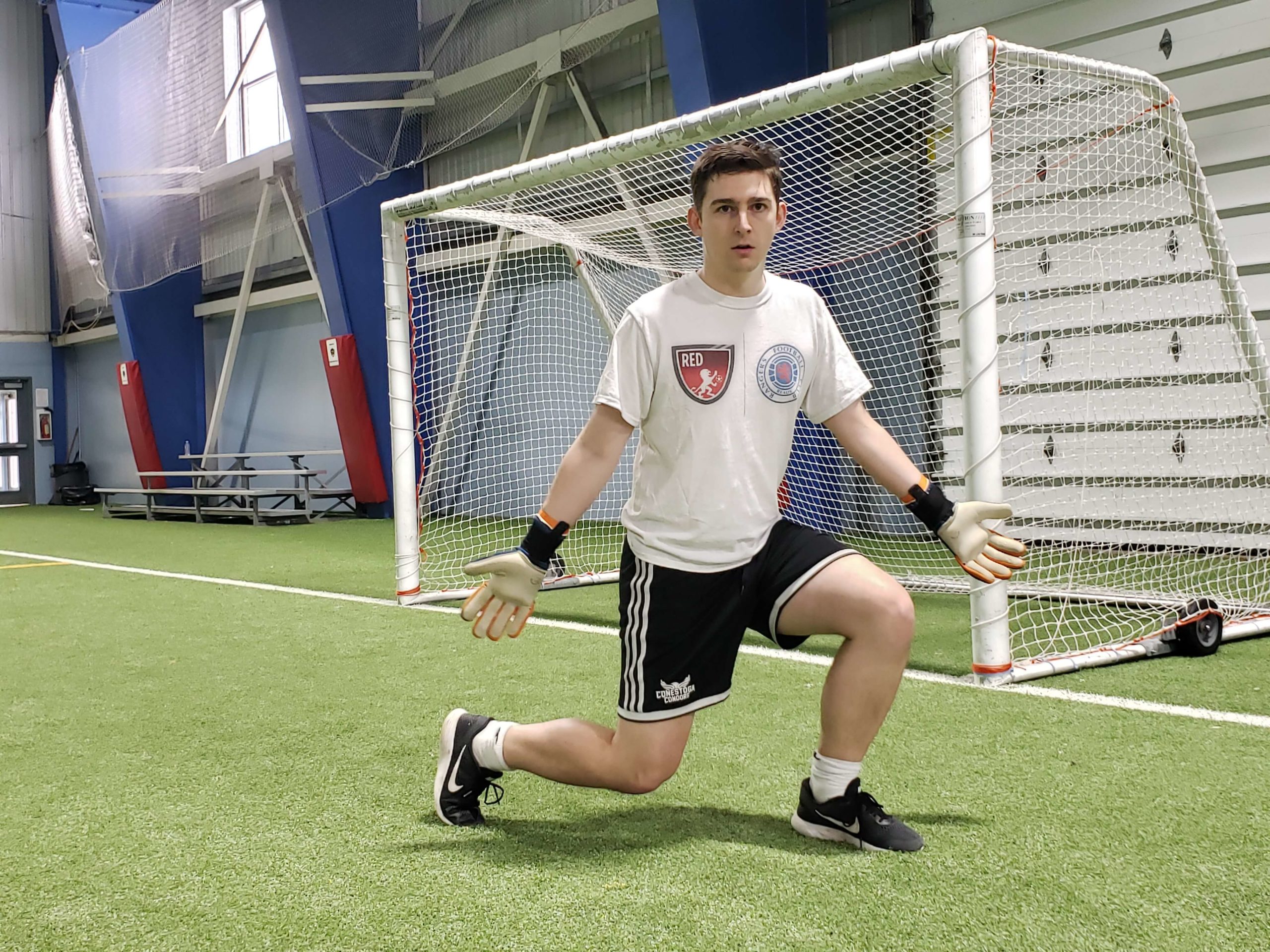 This position helps take away as much of the net as possible. It is important that your goalkeeper understands which knee must stay up and which one must stay down. The near side post must be covered by the upper knee.

Keeping their chest perpendicular to the shooter will increase the surface area the shooter must avoid when attempting to hit the net. Depending on the angle of the shooter and the distance between the goalkeeper and the shooter, an effective block save can make scoring with a direct shot nearly impossible.

This is why keeping the dropped knee off the ground is important. Should the shooter attempt to take a touch and change the angle, or pass the ball to a teammate, the goalkeeper must be mobile enough to change their set position. Dropping the bottom knee all the way to the ground limits the goalkeeper’s mobility while keeping it up increases their ability to recover quickly. We will discuss this more in the next section of this analysis.

Coaches must help their goalkeepers understand how to quickly get into the block save position by coaching each element individually. Attempting to overload your keepers with too much information all at once will likely lead to them forgetting certain elements. Be patient with your keepers and encourage them if they don’t get the technique right away. These techniques are rarely perfected right away. It may take your goalkeepers multiple practices before they are proficient and confident enough to utilise this technique during games.

When coaching the goalkeeper, don’t stop the session after they have made the save. Encourage the goalkeeper to recover to their set position after making the save, or dive on the loose ball if possible.

I shared a similar session to this back in the second-ever edition of this magazine (December 2018), but with a slight variation. That session was designed to help incorporate your goalkeeper into your team’s full session. This session, on the other hand, is designed specifically for the development of your goalkeeper. After your goalkeeper has been warmed up, we can get right into the session.

Start by having your goalkeeper in the net. Set up two lines of attackers to the right and left of the posts on the 18 yard box. The objective is simple. You, or an assistant, will feed balls into the box for the attacker to run onto. Change up the weight and angle of each path to create unique scenarios for your goalkeeper(s) to deal with. We can see this setup below. 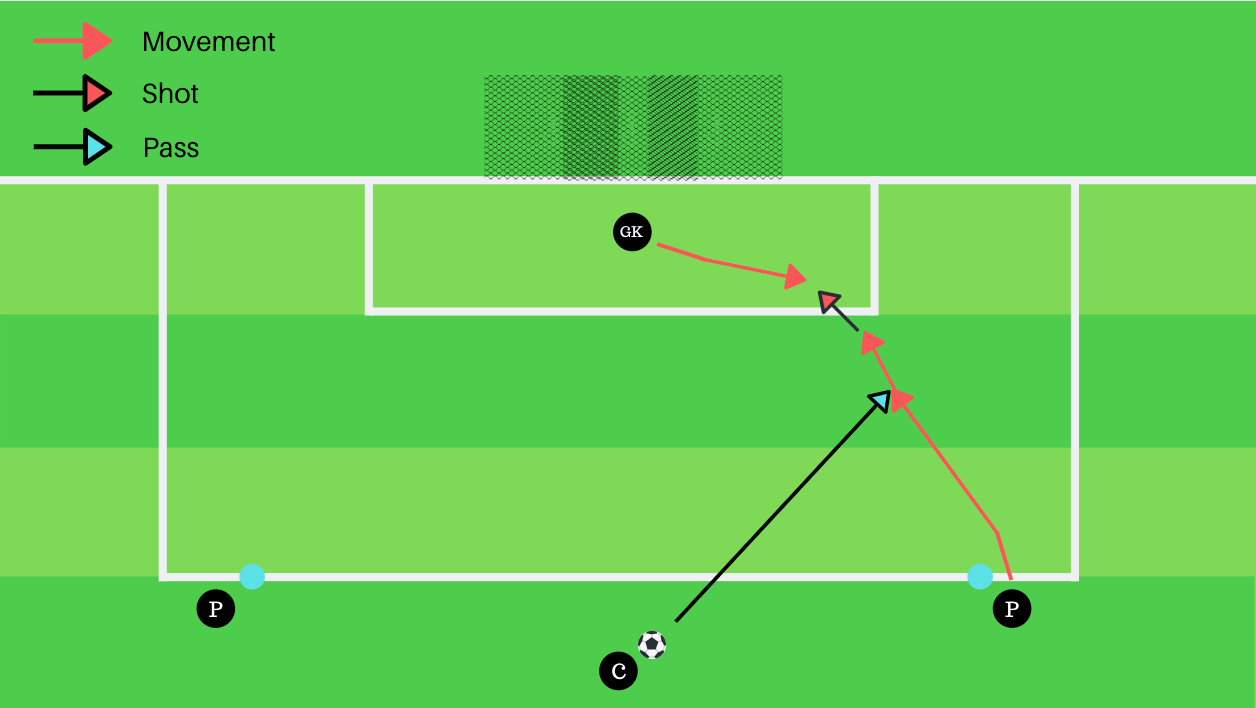 When the ball is played in, encourage the attackers to shoot from various distances and take multiple touches to provide the session with a game realism. If you want to focus on more specific scenarios you can restrict the area the striker can shoot from or limit their touches.

If you are looking for a way to speed up the pace of the session you can introduce a recovering defender to the session. As the ball is played into the space, allow a defender to press the attacker from behind, forcing him to drive at the net and get a shot off quicker. This also ensures the session is match realistic. An example of what this might look like can be found below. 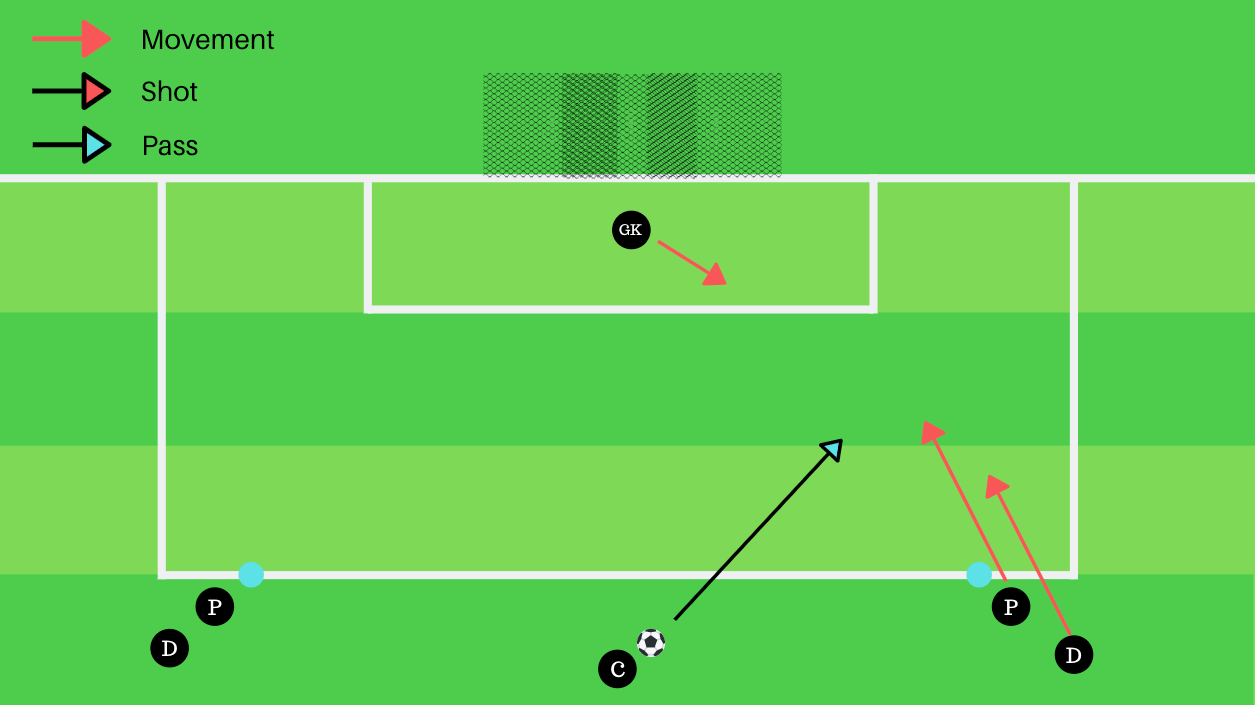 At the end of the day, this session is just one of many that could be used to coach the block save technique. You may want to initially coach the technique in a more technical session before jumping into something game realistic, as shown above.

When introducing this technique to your goalkeeper, make sure they understand that it is not the correct technique to use in every 1v1 situation. The distance of the shooter to the goalkeeper and the angle and speed of their approach are all important factors. Encourage them to experiment with this technique in sessions to become comfortable with the stance and success rate of this technique is certain scenarios.

The repetition of this technique’s use will be the best way for them to learn. The goalkeeper will begin to learn when and where they should be using it. However, they must be guided by the coach to ensure that they are a) approaching the save the correct way, b) in the correct position and shape when completing the save, and c) recovering quickly after making the save.

Hopefully this article has helped introduce some readers to a new technique that they can share with their goalkeepers. For analysts, hopefully it has given them an insight into a technique that is becoming utilised much more frequently in the modern game. Next time you are watching goalkeepers like David de Gea, Kasper Schmeichel or Kiko Casilla, see if you can identify them utilising this goalkeeping technique during 1v1 scenarios.