As we approach the summer, there is still plenty to be decided in Europe’s domestic leagues. Most are still extremely close, and specifically in Italy, Germany, and Spain, we are seeing some fantastic title races. On the horizon, though, is Euro 2020. Europe’s best players are going through the business end of the season knowing there is that little extra motivation on the end, to cement their place in their national sides this summer.

One of Europe’s surprise packages has been Ukraine. Andrei Shevchenko’s side blitzed their qualification group, surprising the likes of Portugal along the way. One of the key players to this Ukraine side has been Manchester City left-back Oleksandr Zinchenko. The 23-year-old has reinvented himself for the English juggernaut in this role, but for Ukraine, he is used in a different way. Shevchenko deploys the player in a more natural position for Zinchenko in midfield. Here, we have seen the brilliance of the man City brought in in 2016.

In this tactical analysis scout report, we will look at how Zinchenko is used in Ukraine’s Euro push. The midfielder is not only able to use his defensive abilities we see on a regular basis for his club, but he is able to showcase his attacking senses that are more often contained due to his defensive responsibilities. This analysis will look at the tactics used by Ukraine, and how we are seeing the best out of Zinchenko as a result of them.

Most people will know Zinchenko well from his time with Manchester City. The Ukraine international was brought in during the summer of 2016 for £2 million. In his first year, he was loaned out to PSV and had mixed success at the Dutch club. When he returned, he stayed in and around the squad. It turned out that City’s troubles at left-back gave the natural midfielder a chance to make his mark on the side.

In this position, Zinchenko has become an important piece in City’s dominant side over recent years. This is due to his abilities that have worked extremely well with the need for City. Pep Guardiola has often used tactics involving inverted full-backs in his time in Manchester. We have seen this with an array of different players since his arrival at the club, but Zinchenko, in particular, has excelled in this role. This has majorly been down to the Ukraine international’s midfield ability, as City spend most of the time in possession. 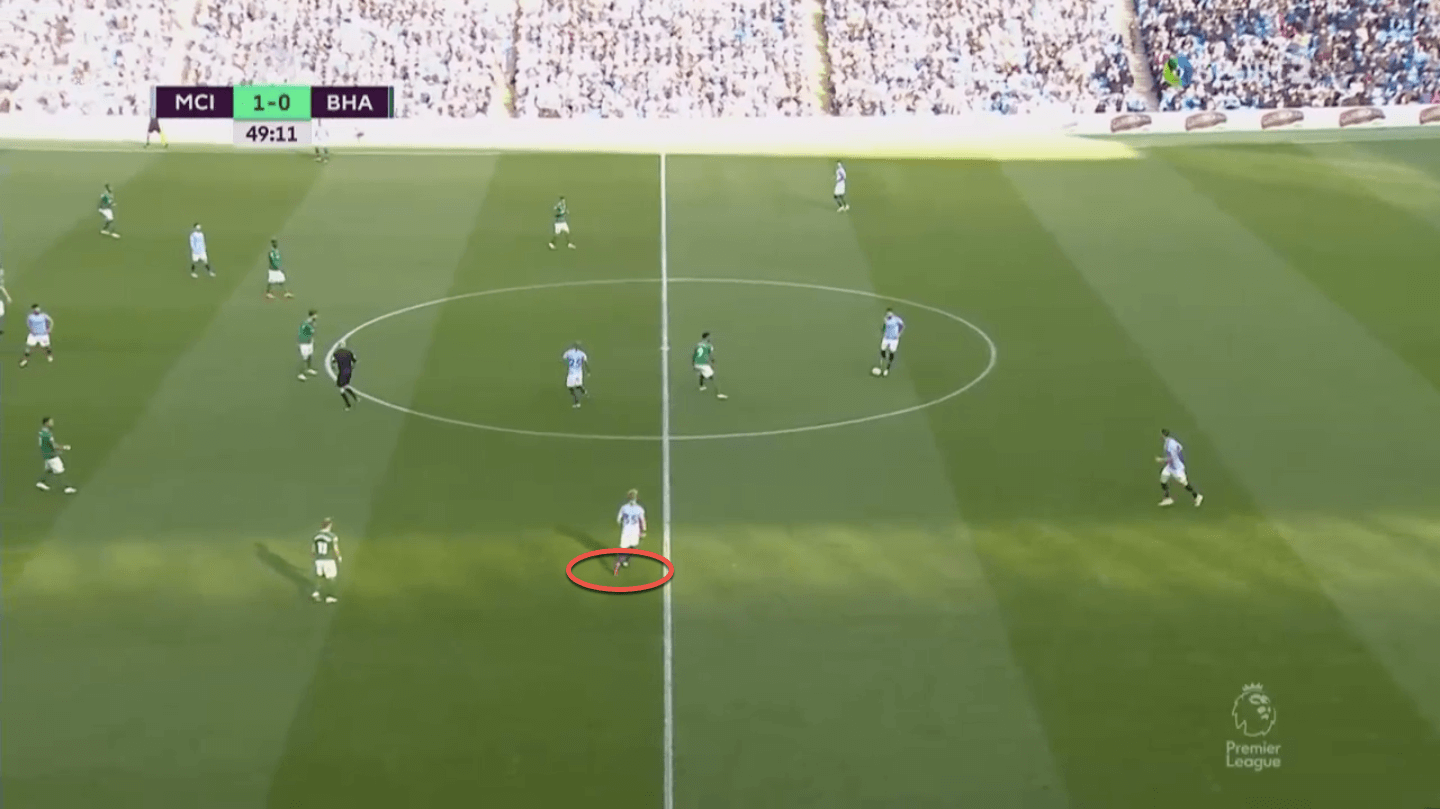 There are times where Zinchenko’s one-v-one defending ability has come under scrutiny, but for the most part he is able to make a major impact on the side using his attacking abilities from this area. Above you can see a pass map from one of City’s matches. In this, the inverted nature of his role in the side is evident, and his presence here is essential in City’s build-up and attacking phase.

For his national side, however, Zinchenko is used in a different role. Before looking specifically at Zinchenko’s role for Ukraine, we will look at their midfield structure under Shevchenko.

Typically, Shevchenko sets his Ukraine side up in a 4-3-3 formation. His midfield three shape will depend on the opposition and style of play they will be looking to implement in this match. Against sides who look to be more dominant, Ukraine will set their midfield up with a double pivot. This adds an extra defensive solidity, which we saw in their 2-1 victory over Portugal. One midfielder will then sit slightly ahead of the two and look to lead the side on the break when possession is regained.

When Ukraine utilise the double pivot, Zinchenko is normally deployed in the left defensive midfield position. Here, he is able to use both the attacking and defensive qualities of his game extremely well. When his side are defending, the 23-year-old is equally adept at holding space in front of the defensive line and slotting into the defensive line on either side of the left-back. 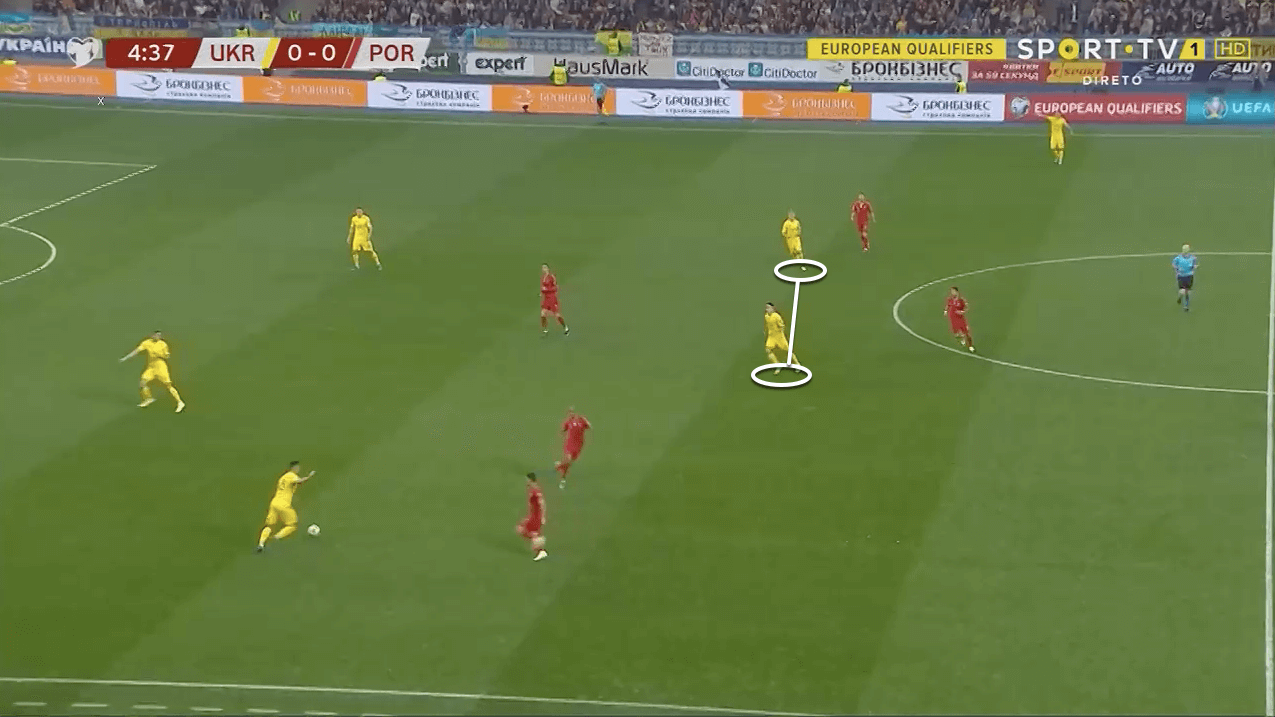 Otherwise, Zinchenko occupies one of the eight roles. Typically on the left, however, he is equally able to play on the right side, he is a near-perfect box-to-box midfielder in Shevchenko’s system.  In matches where Ukraine can implement their style more, this shape is different. Shevchenko opts for a single pivot at the base of the midfield, and two number eights who are given license to move forward and combine with the three attackers. 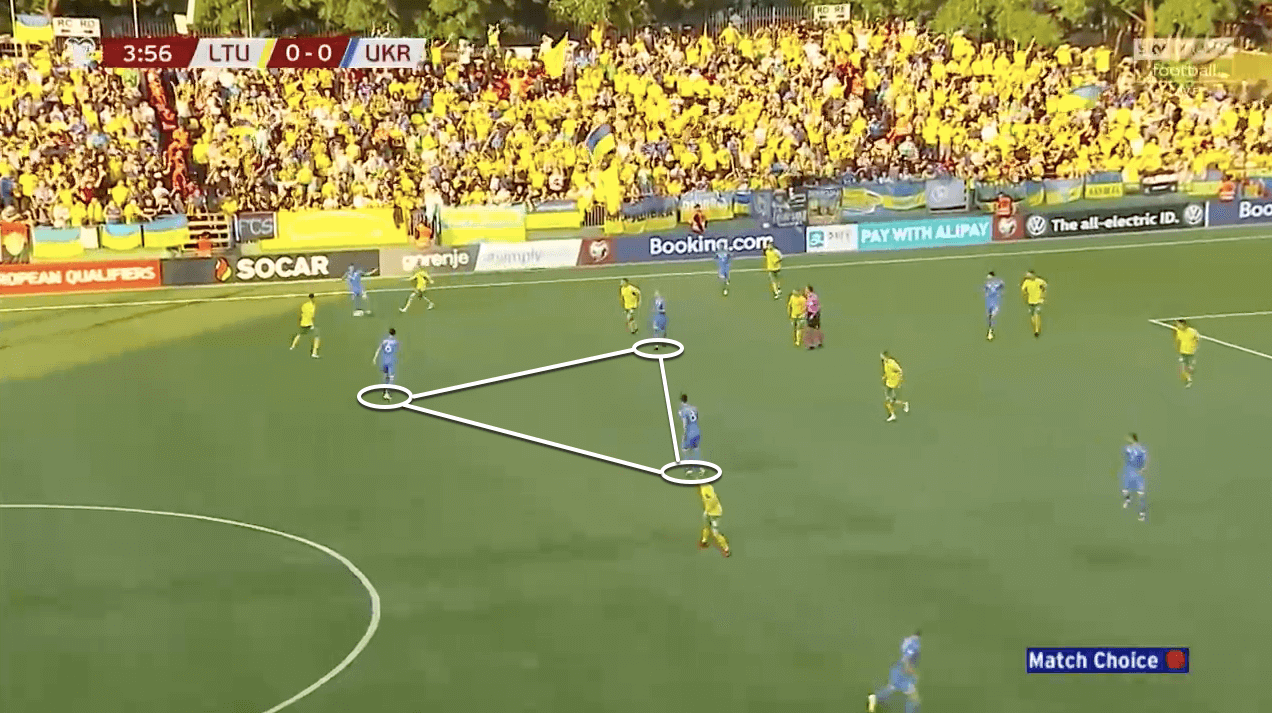 Out of possession, Ukraine’s midfield drops right in front of their defensive line to block off central space for the opposition to operate in. Zinchenko specifically will usually occupy the half-space in between the left-back and left centre-back. Here he uses his defensive awareness to cut out any passes into this area, while also slotting into the defensive line when necessary. During Ukraine’s Euro qualifiers, Zinchenko has averaged 5.64 interceptions and 7.25 defensive duels per 90, while having a 55.6% completion rate in the latter.

This position suits Zinchenko as he is able to use his defensive awareness to look to cut out attacks, but has less specific defensive responsibility as he does when he plays left-back for Manchester City. His average interception count shows his intelligence in reading play in front of him, and this is a massive part of Ukraine’s defensive structure.

For the majority of matches, Zinchenko will hold this position ahead of the defence. At times, however, we will drop into the defensive line to aid his teammates. This happens in two different instances. The first we saw in Ukraine’s match against Portugal. With their side leading 2-0 midway through the first half, Ukraine took a slightly more defensive approach, while looking to catch Portugal out on the counter from there on out. In doing this, Zinchenko actually dropped into the defensive line along with one other midfielder, and they formed a line of six. Here, Zinchenko switched between occupying the outside most position and coming inside with the left-back. Below you can see an example of this set-up. 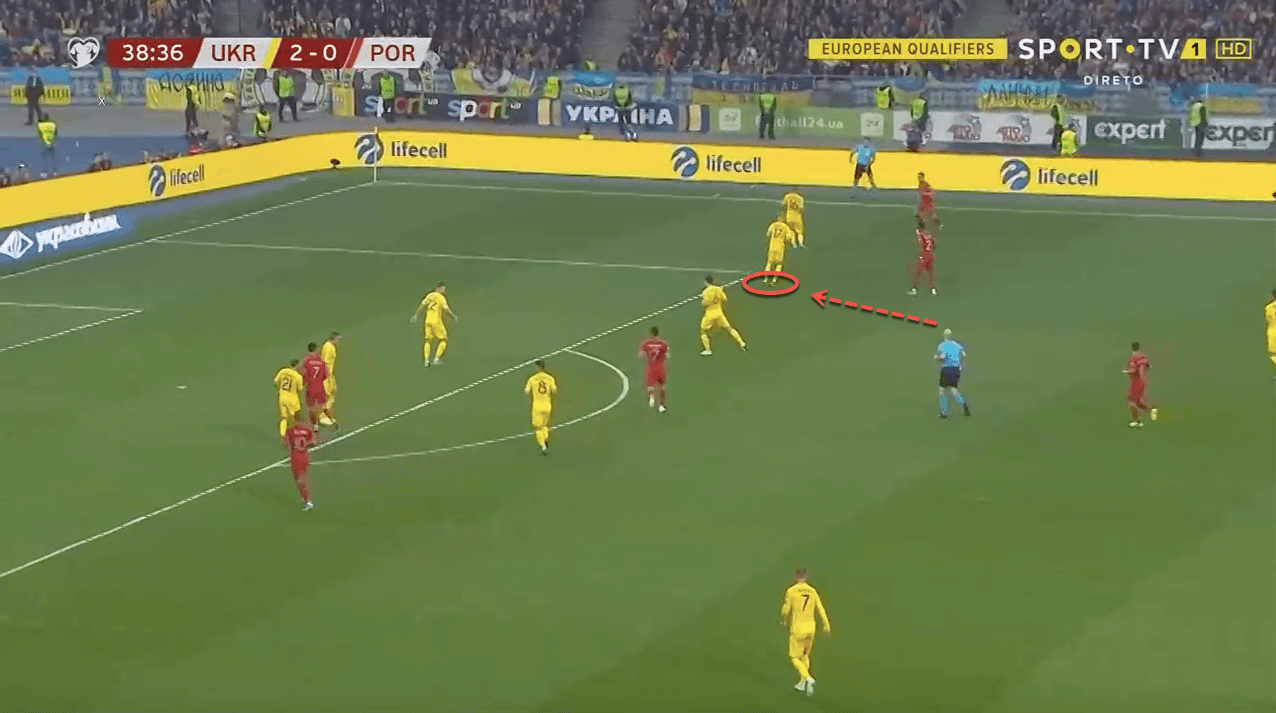 This tactic is plausible due to Zinchenko’s flexible ability. His defensive awareness has been heavily improved upon in his time at Manchester City, and Shevchenko is reaping the benefits with the national team.

Zinchenko also provides the left-back specifically more freedom. Having a player such as the City star that is able to fill in at left-back allows him to be more adventurous going forward, and also able to track an opponent deeper into their own half, knowing Zinchenko is capable of slotting into this position extremely well. 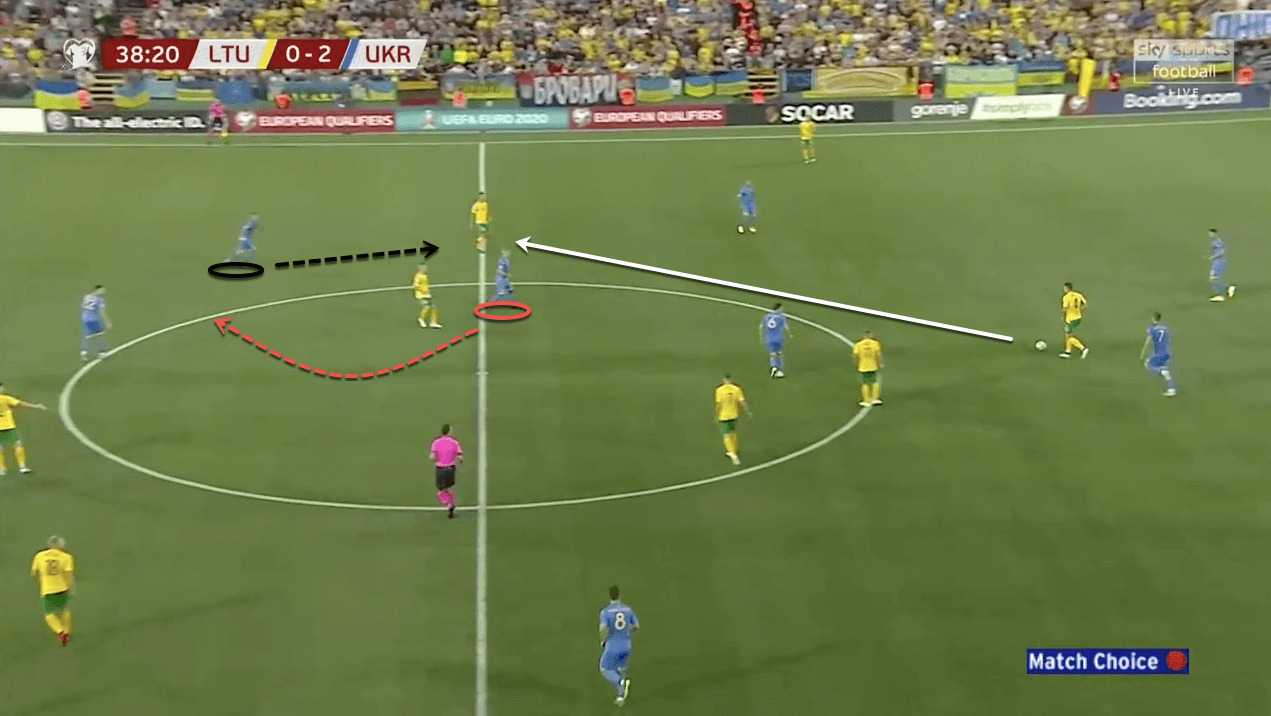 In this example above, you can see Lithuania with possession coming towards Ukraine’s left side. When the winger receives possession, the Ukraine left-back steps forward to press the opposition. This forces them backwards. The left-back continues to follow and apply pressure long after the opponent has turned to move back. 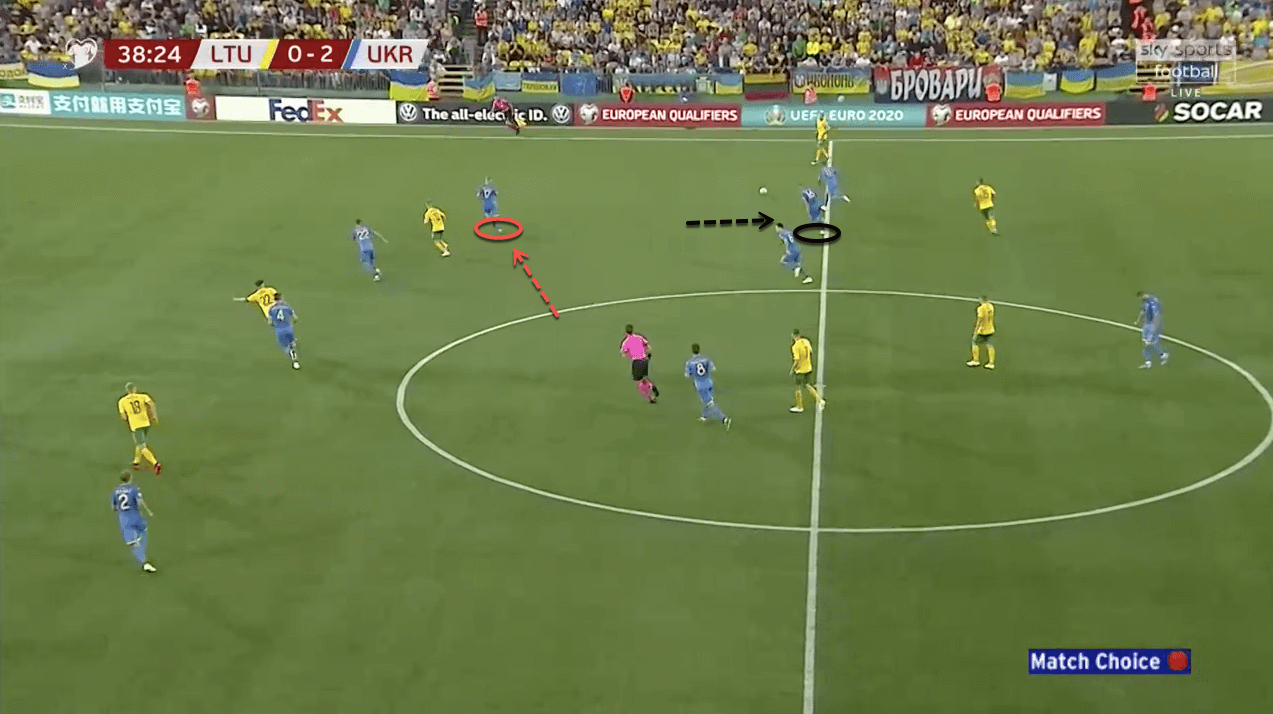 In an attacking sense, this is where we are able to see the greatest difference with Zinchenko compared to his role at Manchester City. The 23-year-old grew up primarily operating as an attacking midfielder, so he has the ability to have an impact in multiple areas of the pitch. Below you can see Zinchenko’s heat map during Ukraine’s Euro qualification campaign so far. You are able to see that for the majority of the time, the midfielder is deployed in higher positions up the pitch in one of the number eight roles.

In these positions, Zinchenko is able to use all of his abilities to truly shine. It is normal to see him consistently acting as the metronome for this Ukraine side. The image below is the side’s pass map in their victory over Serbia. You can see the influence Zinchenko has on the side, positioned directly in the centre of midfield with strong passing links to all of his teammates around him. Zinchenko averages 70.93 passes per 90, completing 90.2% of them. Of these passes, 10.61 are into the final third with an even better 91.1% completion rate. It is normally in these areas where Zinchenko is pulling the strings from deeper positions that he is at his best. As well, when he is in these areas he is well-positioned to defend when possession is lost.

Zinchenko’s best asset in midfield is his ability to see the entire pitch at any time. Below you can see an image of Zinchenko occupying a higher space as his side is in possession. As his teammate comes to this right side of the pitch, the midfielder acknowledges the lack of attacking routes in this area. Zinchenko quickly identifies a pocket of space to burst into to provide a passing outlet. 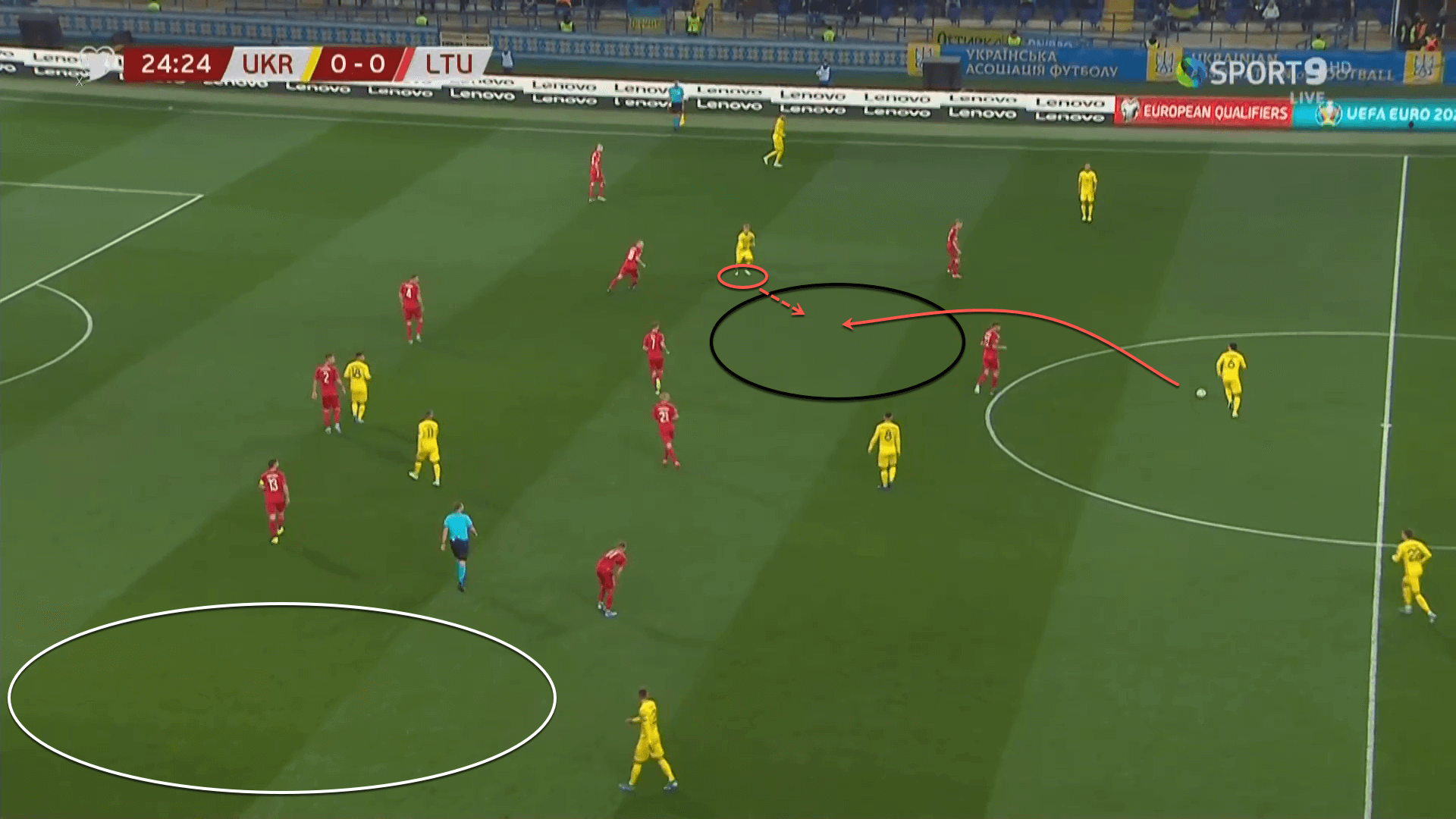 As he provides support, he is looking for the next place to play possession into. Quickly, he recognises the space his left-back is in on the far side of the pitch. Once Zinchenko receives the pass, he takes a quick touch to set himself and plays a pass through the lines and into the channel for his teammate to run in behind. 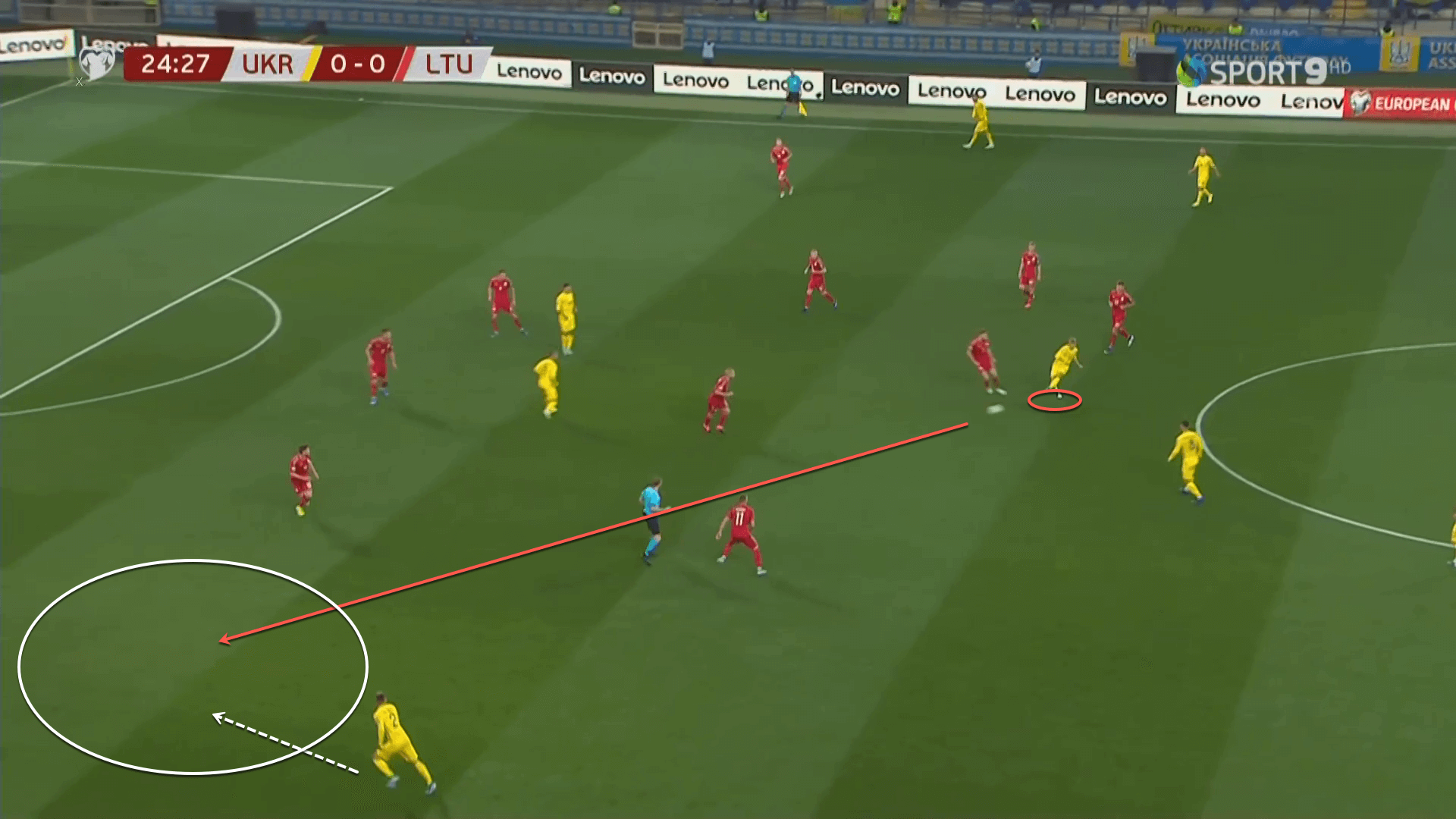 Alternatively, Zinchenko also looks to get forward at the opponent’s backline himself at times. Once again, the Ukrainian uses his great intelligence to find little pockets of space in these areas to make himself available to receive possession from teammates. He directly contributes 1.34 shots per 90, alongside assisting another 1.61. These often come when he makes forward runs into the last third. 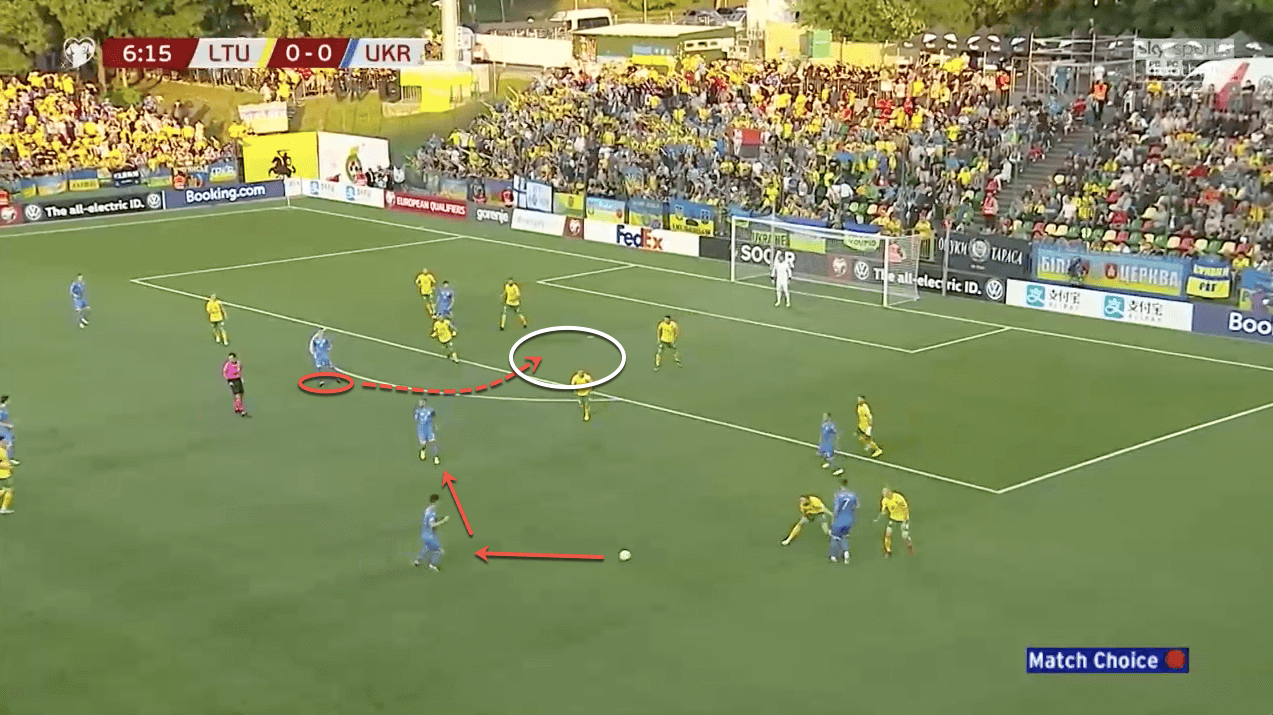 In the image you can see above, Zinchenko has identified an opportunity to move forward into the final third. As his side builds possession on the right side, he drifts into a typical centre-forward area and waits for an opportunity to present itself. 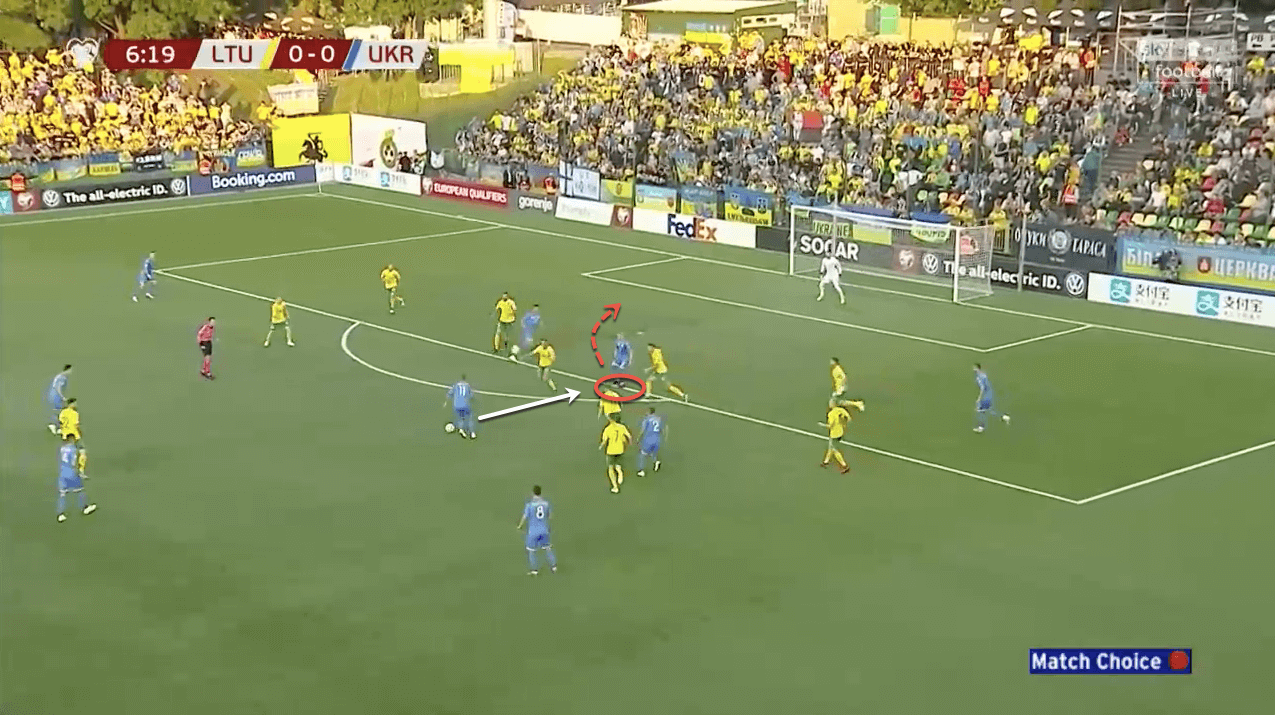 When possession is moved centrally, the Lithuania defence tries to step forward. Zinchenko uses this movement and moves forward onto the shoulder of the last defender. His teammate recognises the movement into this position and finds him with a ball in between the centre-halves. Zinchenko has found a pocket of space that leaves him all alone to easily slot in Ukraine’s opening goal in this match.

With the Euros right around the corner, players will have little time after their club campaigns are over before heading out on international duty. One team that should be considered a serious dark horse to make a run in the competition is Ukraine. Shevchenko’s side is in top form after blitzing their qualifying group and will be full of confidence as they head into the tournament. This will be the first main stage that will get to witness Zinchenko’s midfield ability. The Ukraine international has made a name for himself with Manchester City at left-back, but here he will have the opportunity to prove why he should be considered as a midfield option going forward for the English side, or even why another top side should look at him as a midfield option this summer. This analysis has given you a look at what you can expect from this Ukraine side in the midfield, and specifically what we can see from Zinchenko as he looks to lead his national side to an impressive Euro run.