After the cup tie, Manchester City are in the English League Cup final again. In the semi-final, they faced Manchester United, and, in the first leg, won 3-1 away from home. All they needed was to secure the lead at the Etihad Stadium.

This was the third Manchester Derby played in the 2019/20 campaign, before the game, each team won once. Therefore, in this match, both managers did not follow their usual setups. They introduced some new elements and tactics to the team. Despite losing the game, Manchester City were still the better team, they did not allow Manchester United to play their game and attack comfortably.

In this tactical analysis, we will show you the analysis of Pep Guardiola and Ole Gunnar Solskjær in this cup tie.

Guardiola’s team played in an intriguing 3-4-2-1, as the only proper centre-back was Nicolás Otamendi, who partnered with João Cancelo and Kyle Walker; Raheem Sterling and Riyad Mahrez, who were supposed to play as the wingers, played as the wingbacks. Rodrigo Hernández did not drop to the centre of the defence, he partnered Ilkay Gündoğan as the midfielders.

For Manchester United, they played in a 5-3-2 formation. Luke Shaw played as a left centre-back, alongside with Harry Maguire and Victor Lindelöf. Jesse Lingard, Fred, and Nemanja Matić played at the midfield, while Mason Greenwood joined Anthony Martial up front.

Given the lessons learned in the previous game, when United suffered from a numerical disadvantage at the midfield when defending, Solskjær adjusted his tactics. In the game, United set a midblock instead of pressing high, which consisted of five players. With this game plan, even City’s attacking midfielders dropped in the build-up phases, United still enjoyed a numerical superiority.

Another function of the block was to prevent the central penetration from City. The five players tried to stay compact and defend together, which blocked or covered City’s midfielders. As, in the below image, Rodri could not pick Bernardo Silva or Gündoğan, he had to pass to the wide player, Cancelo. 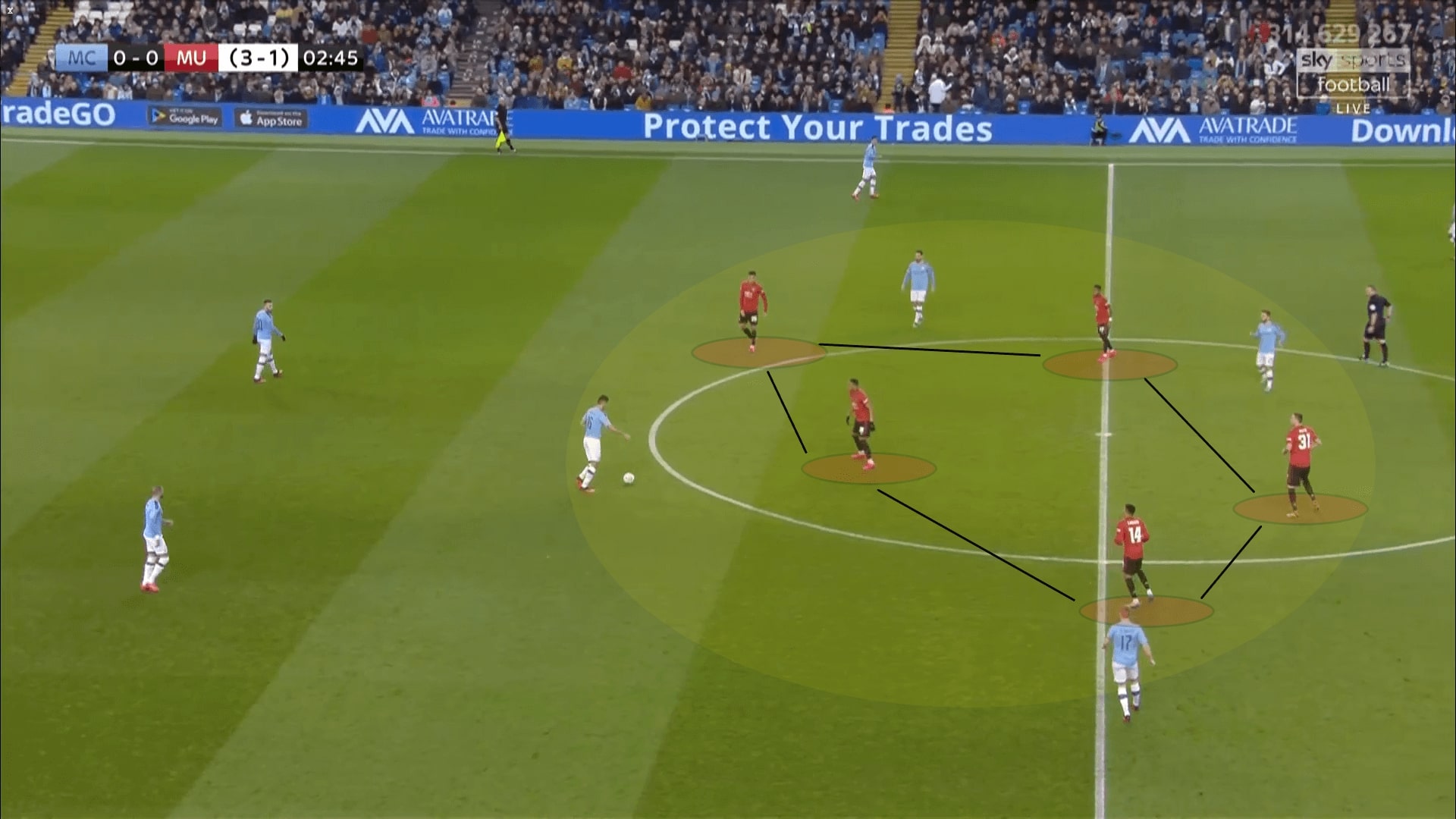 The build-up of City

However, the pattern and shape of City’s build-up were also different from the previous game. They were mastered in the basics of football, creating spaces, moving oppositions to play out from the back. They managed to deal with the midblock of United in multiple ways.

One of the methods was to stretch the block. The first phase of City’s attack was a 3-2-2-3 shape, with De Bruyne and B. Silva positioned themselves at the half-spaces. Meanwhile, Gündoğan and Rodri stayed at the centre, closed to each other; On the left, Cancelo enjoyed some freedom to provide the width.

The objective of these positionings was to stretch United’s midblock. If Lingard or Fred stepped aside to mark B. Silva or De Bruyne, then, Rodri and Gündoğan enjoyed more spaces at the centre. If United decided to stay compact, then, De Bruyne and B. Silva would receive the pass at the half-spaces.

This was demonstrated in the below image. It showed the 3-2-2-3 attacking shape of City and United’s midblock. In this situation, Lingard and Fred were lured by the attacking midfielders, hence, Walker could find Rodri at the centre. 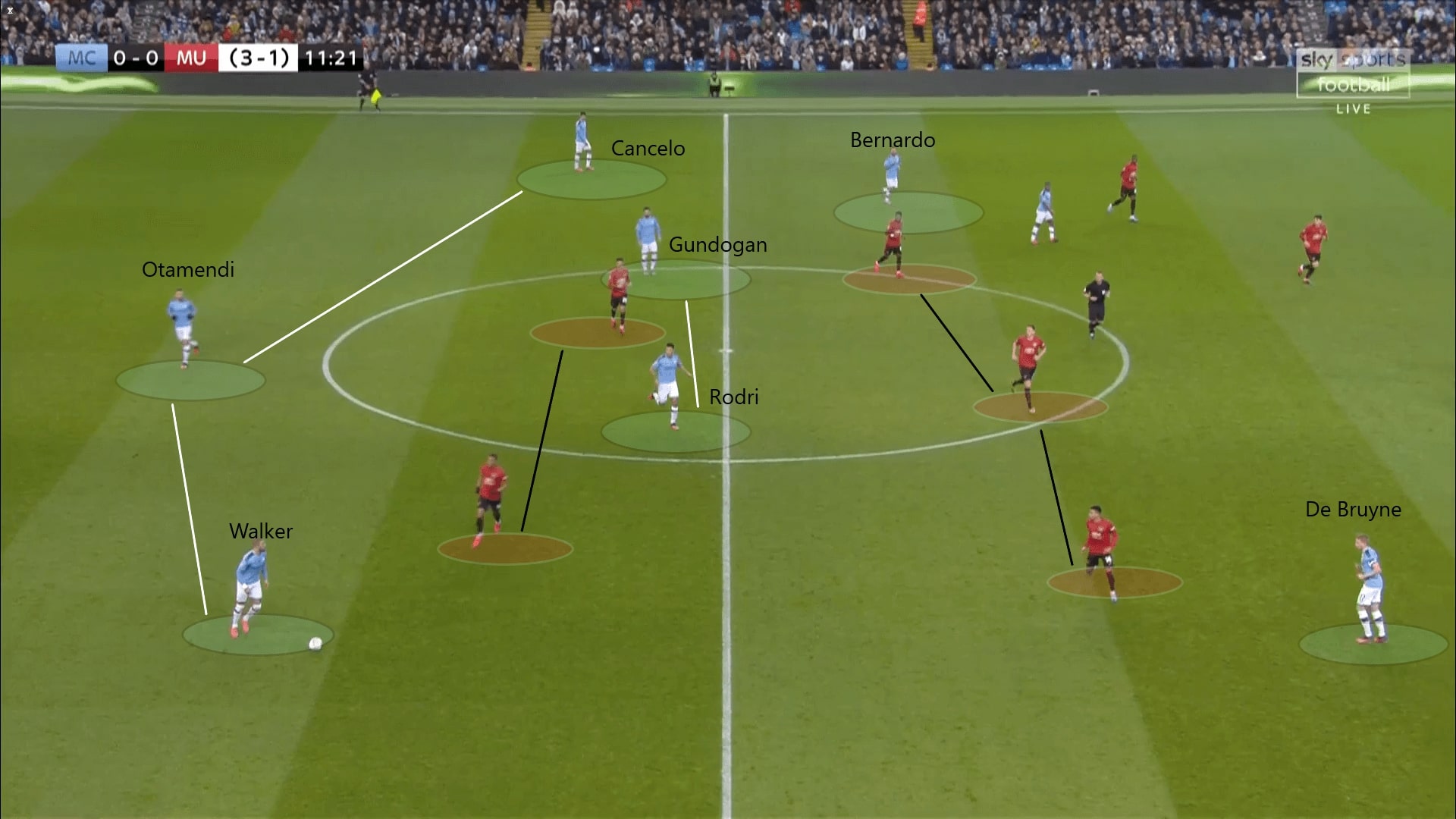 Another strong tool of City was their ability to move the positions of opponents. They would draw the block to a side, then quickly switch the ball to the weak side. It put the United players in a dilemma, as they only used five players for the midblock, hence, unavailable to cover the weak side.

The following image is an example. Cancelo and Sterling exchanged some passes on the left, dragged the United block to the left. Then, when the ball was returned to Rodri, De Bruyne immediately appeared as a passing option. Then, the Belgian provided his trademark wicked cross, which tried to create a chance for City.

In some other situations, City could also find Mahrez, who was isolated on the right and strong in one v one situations. These were some favourable conditions which Guardiola tried to create for his team in the final third.

Throughout the game, City was the dominant side, enjoying 60.67% of the possession. 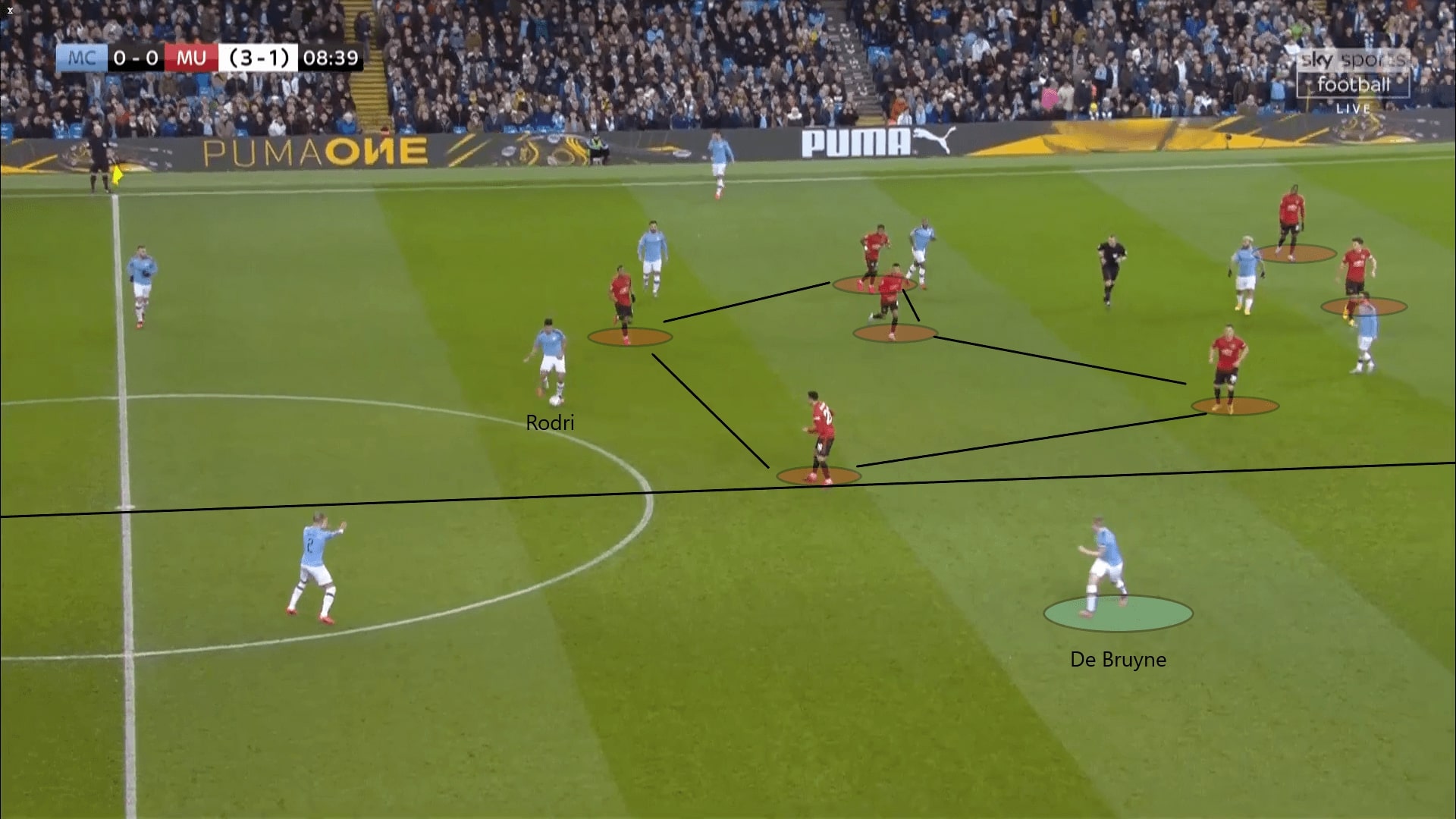 As they did in the previous game, City pressed high to disrupt the build-up of United. The press was different, as they did not only target David De Gea and the centre-backs. Instead, they pushed their players high, pressing with a 3-4-3 shape, with two layers in the high press.

In this game, City also wanted to force United to play long. First and foremost, they had to cover the central midfielders of United. Therefore, in the first line of the press, Sergio Agüero, De Bruyne and B. Silva did not only go for the centre-backs, but they should also cover the midfielders.

As shown in the below situation, City pressed in a 3-4-3 shape. Both United pivots, Fred and Matić were covered; Aaron Wan-Bissaka was marked by Sterling. Therefore, Lindelöf attempted to find the dropping Greenwood. However, under pressure, United loss the ball and resulted in a City throw-in. 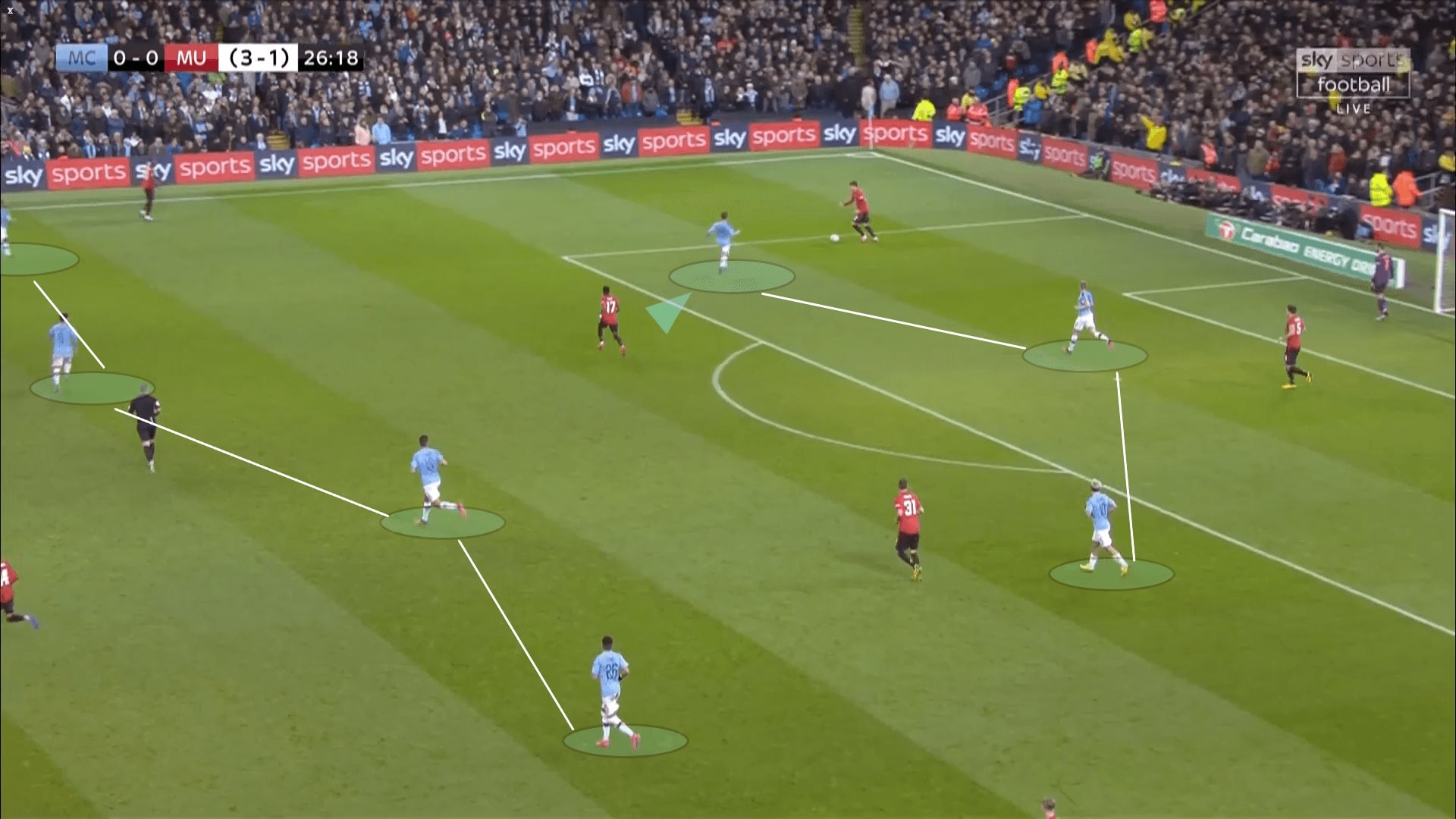 City front players were good at closing a side after they forced United to play the ball wide. Again, the job was to prevent the midfielders from receiving the ball. When United tried to play out from the back, the process involved six to seven players, as Solskjær wanted to maintain a numerical superiority in this phase. However, this also made United front players easily being identified and marked.

Under this circumstance, City forced the ball to Shaw. Rodri and Mahrez did their job, as they both marked Lingard and Brandon Williams. Meanwhile, B. Silva showed his ability in pressing skills, when he pressed the ball, he also covered a player behind him, who was Matić in this case.

Williams signalled Shaw to play long, but the target, Marital, was easily identified by Otamendi, and City won the ball back. 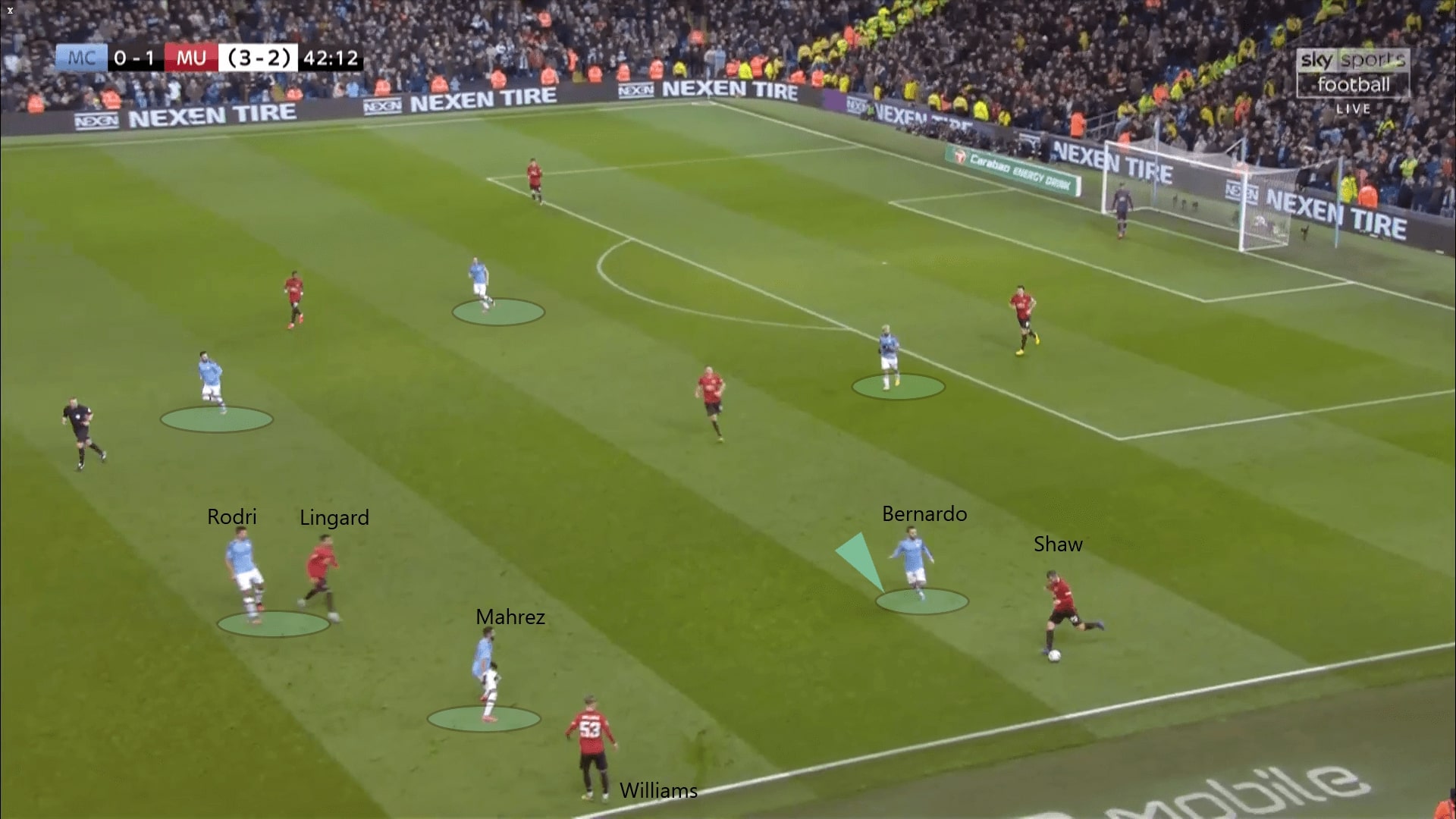 When the high press of City failed to win the ball back, they sit deep to form another block. Interestingly, both Mahrez and Sterling also positioned themselves deep to defend, playing the role of the wingbacks.

In this phase, the defence of City was like  5-2-2-1, but it was flexible when they pressed on the flanks. City midfielders continued to occupy the central area, forcing United’s attack to go wide. 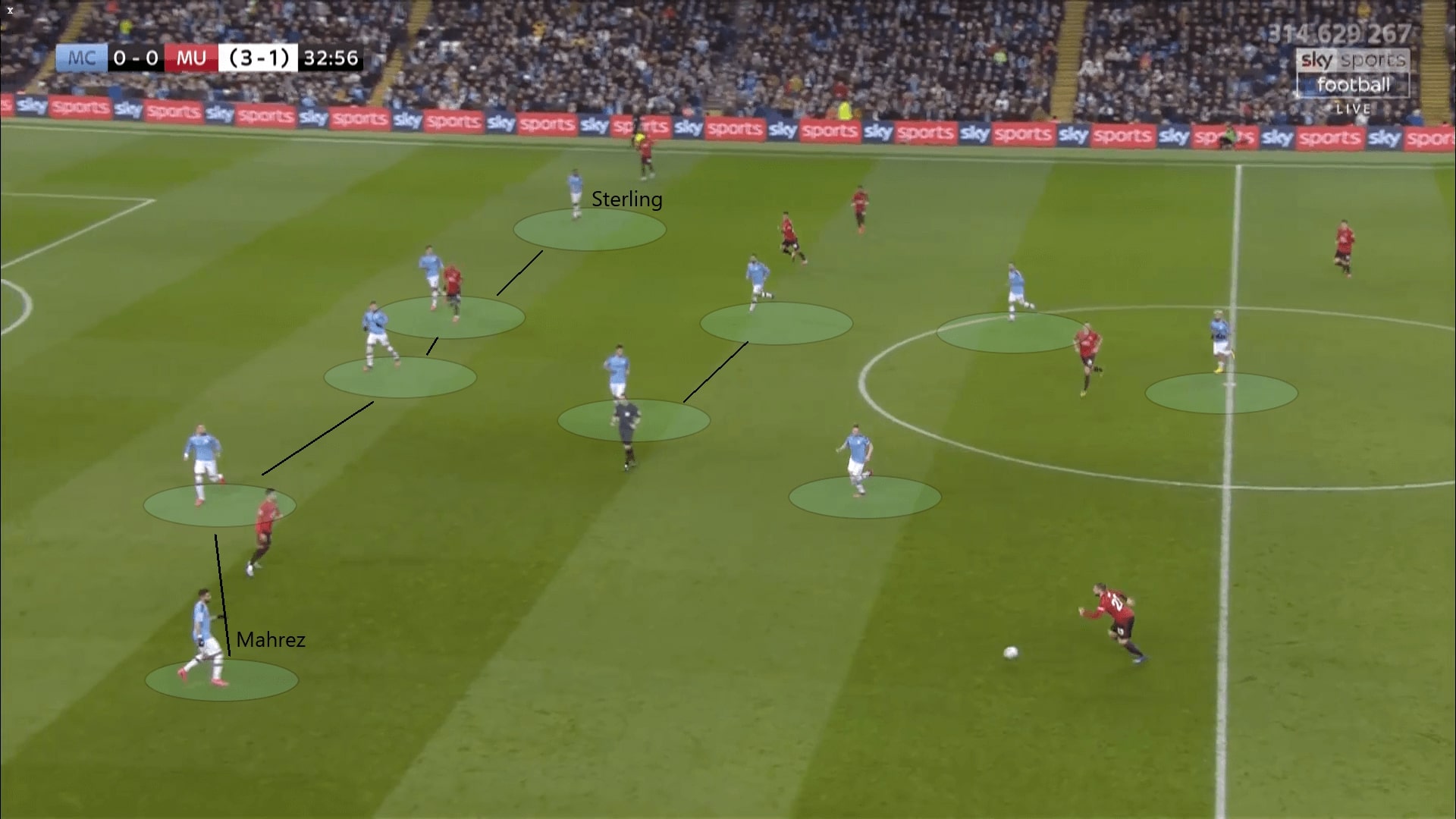 Again, some old issues of United still existed. They lacked creative movements and combinations in the final third. Therefore, when they were facing a deep block, they struggled to break it. Apart from the set-pieces, United only had two shots in the game, with a total xG of 0.08 only.

Even United put a pacey winger, Daniel James on the pitch, they failed to maximize the speed of the Welsh on the flank, as there was no clear form of United’s attack. As a wingback, Wan-Bissaka was slightly conservative, therefore, United lacked the width.

In this example, City’s backline was exposed. They only had the back-three at the centre of the defence, while Sterling was staying too high. There were huge spaces generated on the right side, although James was going to exploit those spaces, Cancelo had time to read and react. James’ run was in vain. 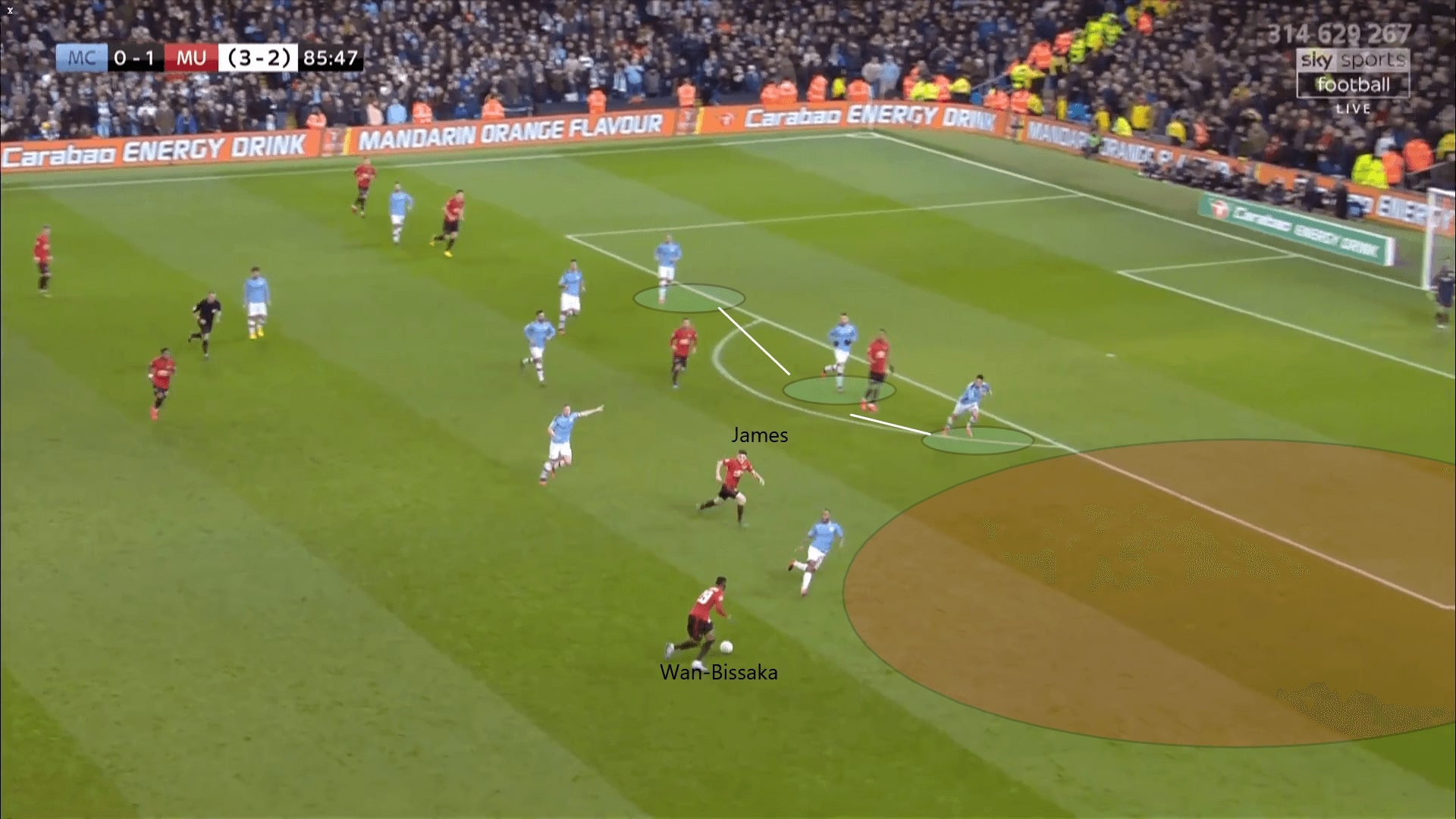 A talking point of this match would be the way of both teams to deal with transitions. For City, Rodri did well to fight for the ball, anticipated and won the ball back during transitions. Below was the ball recovery map of the Spaniard, he made a total of 13 recoveries, seven of them occurred in United’s half. 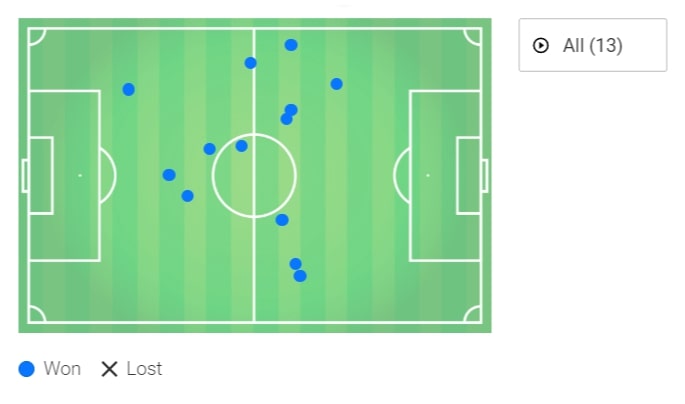 As mentioned, United had a low xG in this game. Rodri’s presence to stop the counter-attacks was a vital factor. On some occasions, he even did more than that, turning a defensive transition to a City quick break.

In this example, United intercepted the ball, Fred tried to release James, but the pass was anticipated and intercepted by Rodri. And, the Spaniard managed to keep the ball in play, quickly found Agüero for another City attack. 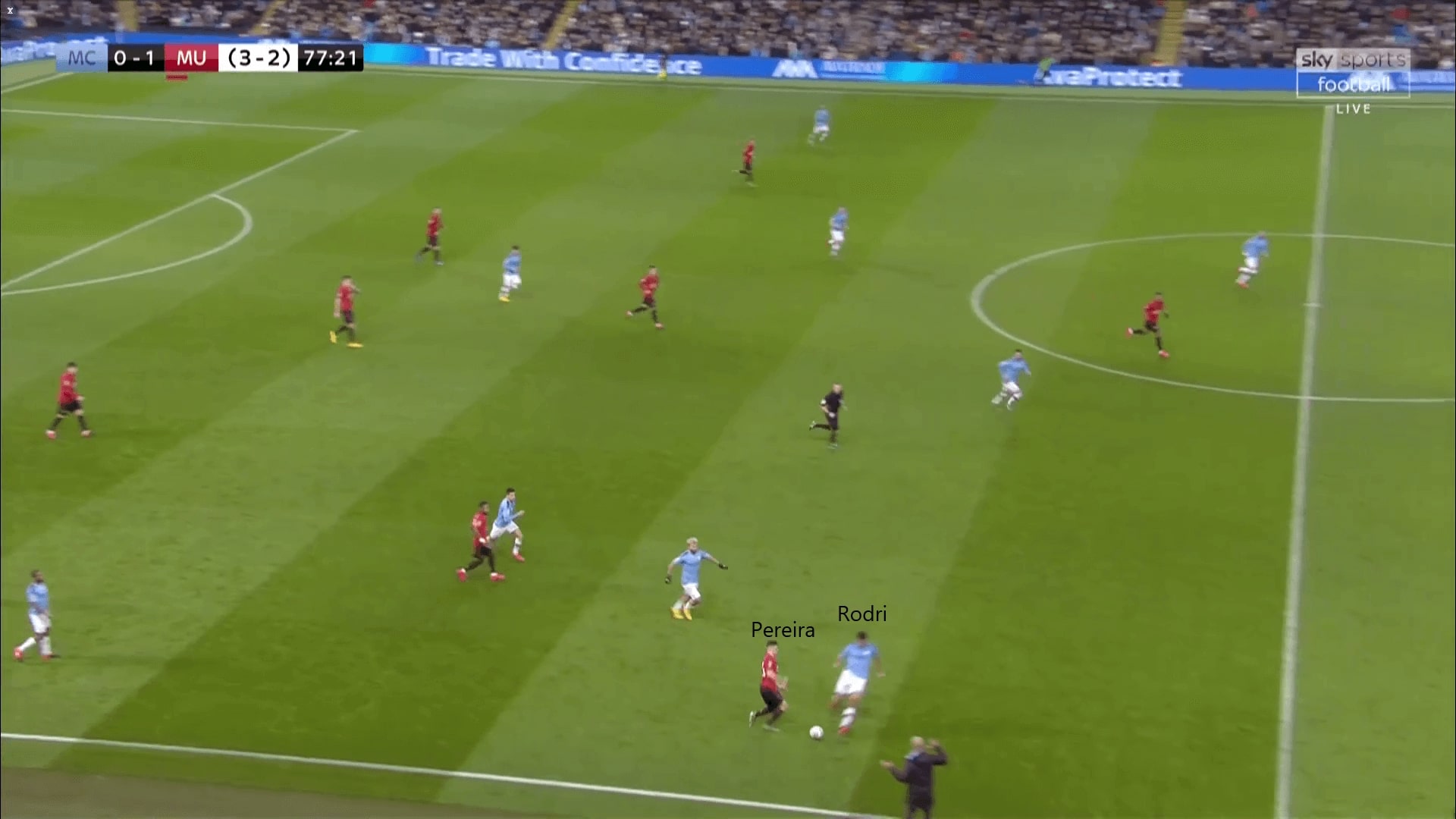 Another element when defending was the use of a back three. In the Manchester Derby that played in December, City’s backline was exposed when United played quick counters. However, with a back-three in this match, and two pacey players, Walker and Cancelo, City managed to deal with the quick transitions.

In this example, it was one of the shots by United in this game. They were on a counter, which Fred picked Martial, who stayed wide. When the Frenchman receive the ball, Walker did not panic, and he closed his angle to cut inside, forced Martial to shoot with his weaker foot. Throughout the game, United’s counter-attack seldom damaged City. 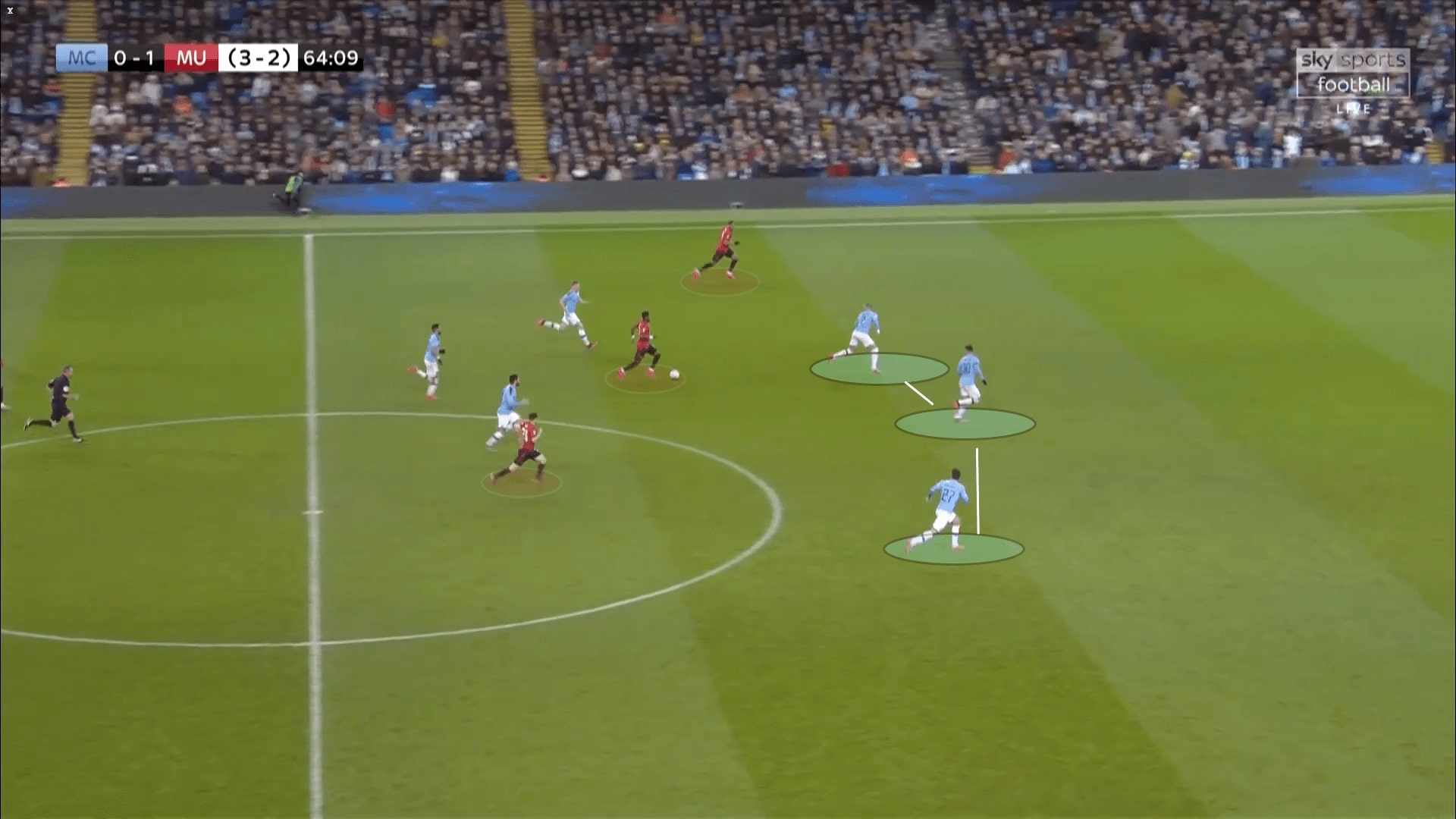 On the other hand, United also had a key player to stop the transitions. He was Matić, As the deepest midfielders of the team, he tracked back, using tactical fouls to stop plays. Since United loss the ball quite often in this match, the Serbian had to make many defensive actions, and eventually and inevitably, got his second yellow.

Below was an example, which demonstrated the defensive action Matić kept United in the game. United were sloppy at times in this game, this was one of the situations that they lost the ball in their own half.

The quality of the pass from B. Silva to Mahrez was slightly below par, it was bouncing, and it required the Algerian to take an extra touch. However, when Mahrez tried to control the ball, Matić came back and recovered possession. 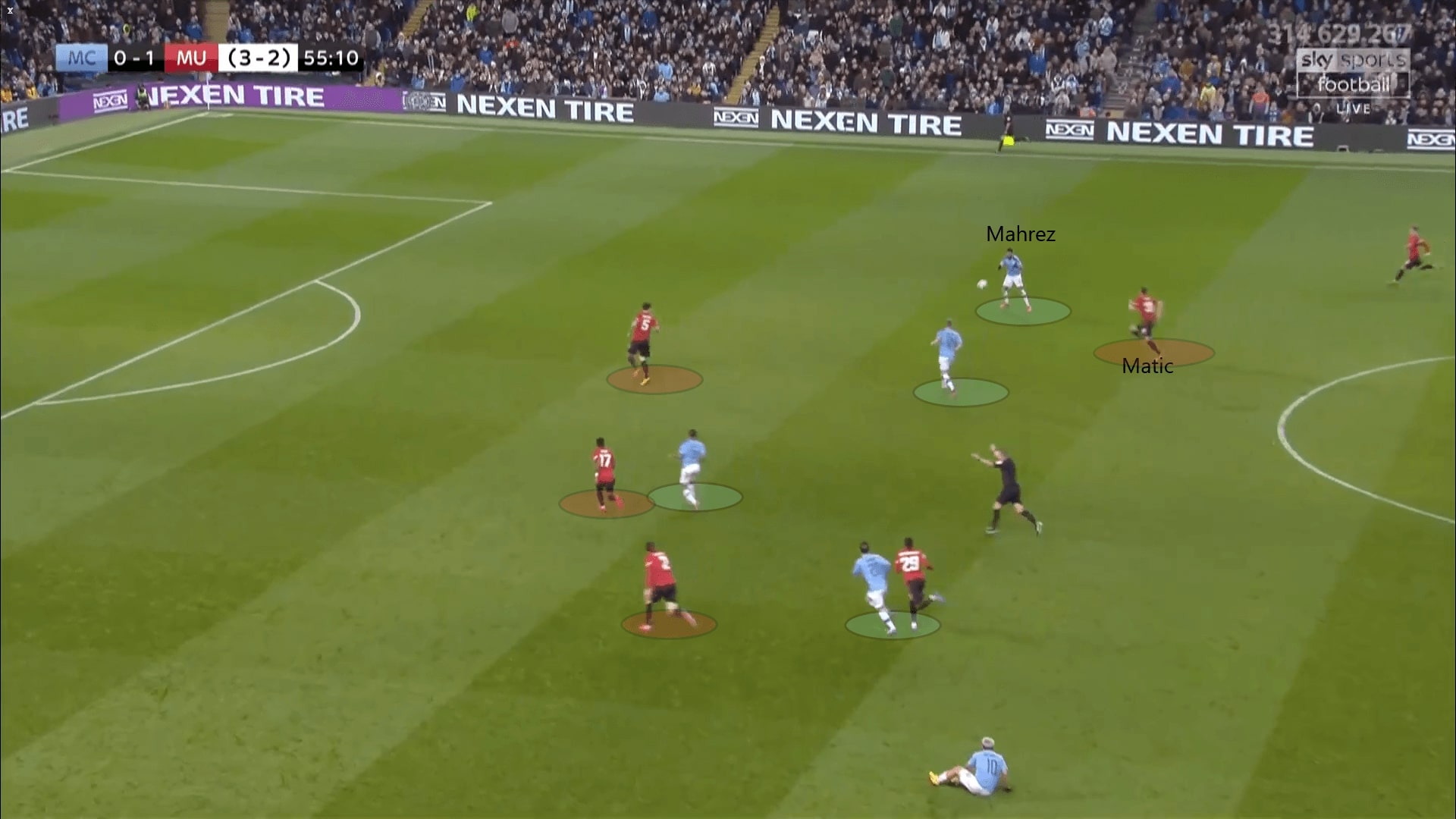 The short corners of City

At last, we mentioned a notable sequence used by City in their short corners. When they had corners on the left, they would use this tactic. First, De Bruyne passed short to B. Silva, lured United players out, then B. Silva found Mahrez, who was ready for a cross.

Then, we should investigate the movements of City players in the box. They could be roughly split into two groups: players at the front post and the isolated Otamendi. When Mahrez crossed, Rodri, Sterling and Agüero went to the front post, taking the majority of red shirts together with them. As a result, Williams was isolated with Otamendi.

This was the most favourable condition that City could create with the short corners. They tried a couple of times, but the execution let them down. 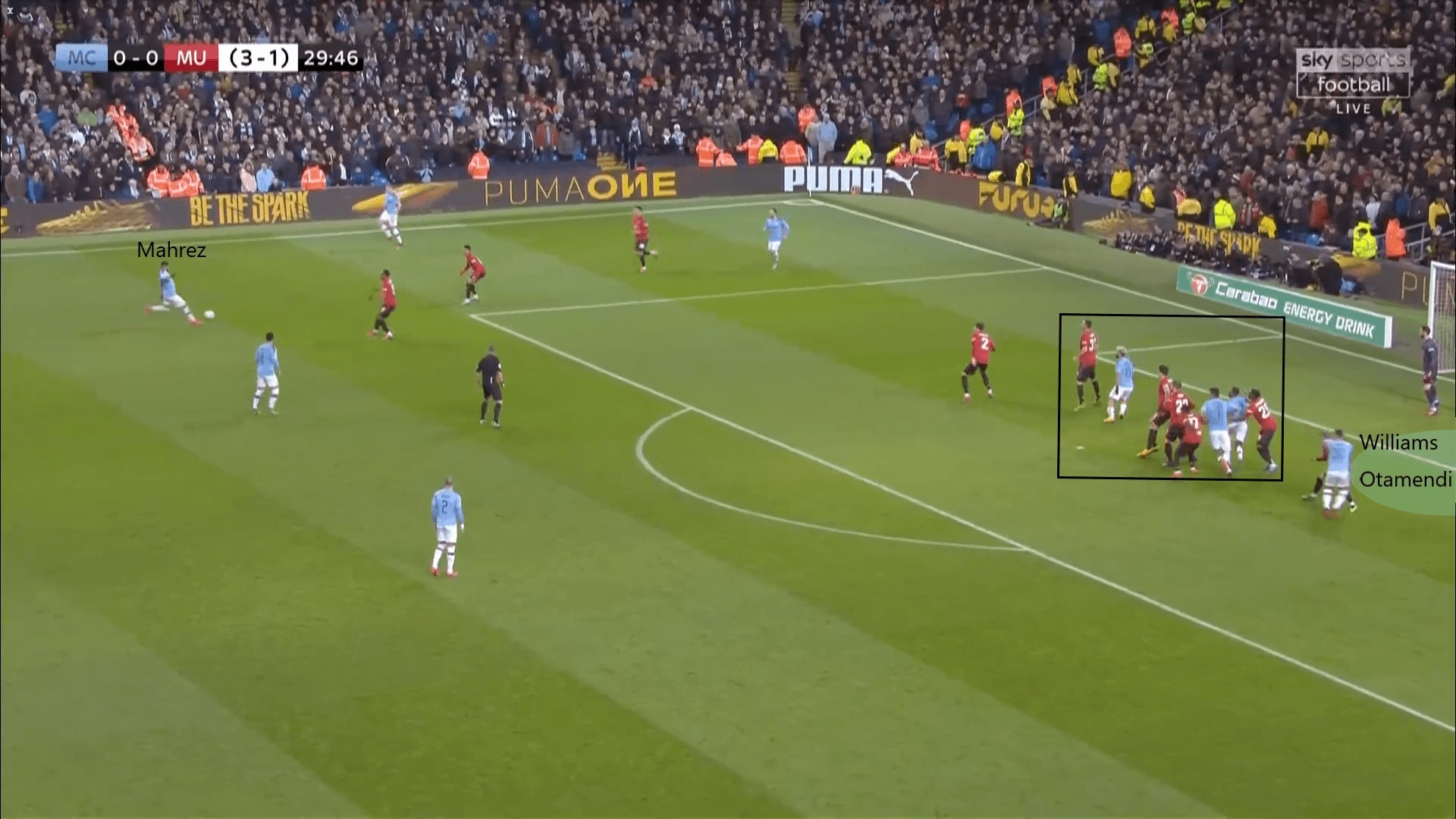 The xG of City was merely 0.77, while United’s xG was 0.52, it seemed like a tight game. However, the statistics did not reflect the whole story, as there were some cases where City was just slightly offside and could not find the net. Also, a pass from David Silva in the six-yard box that failed to convert to a shooting chance, City should have scored in this game.

For United, 0.3 of their xG was from Fred’s freekick in the final stage of the game, that means, excluding that poorly executed freekick, United merely had an xG of 0.22. The finish from Matić was good, as it was a chance with an xG of 0.02 only. Despite winning the game, United was not enough to recover the loss in the first leg.

We will see, whether City or Aston Villa are going to be the champions of the English League Cup in the 2019/20 season.