In the middle of a dense stage in the Premier League schedule, West Ham hosted Liverpool in a midweek match. The East London side recently re-hired David Moyes as manager, and pre-match had only tallied four points from their four league matches under the Scotsman. Liverpool, on the other hand, are on an unprecedented run and are looking to extend that at London Stadium. This tactical analysis will discuss the strategies of both teams and dissect how Liverpool’s heavy possession eventually overcame West Ham’s defensive setup. 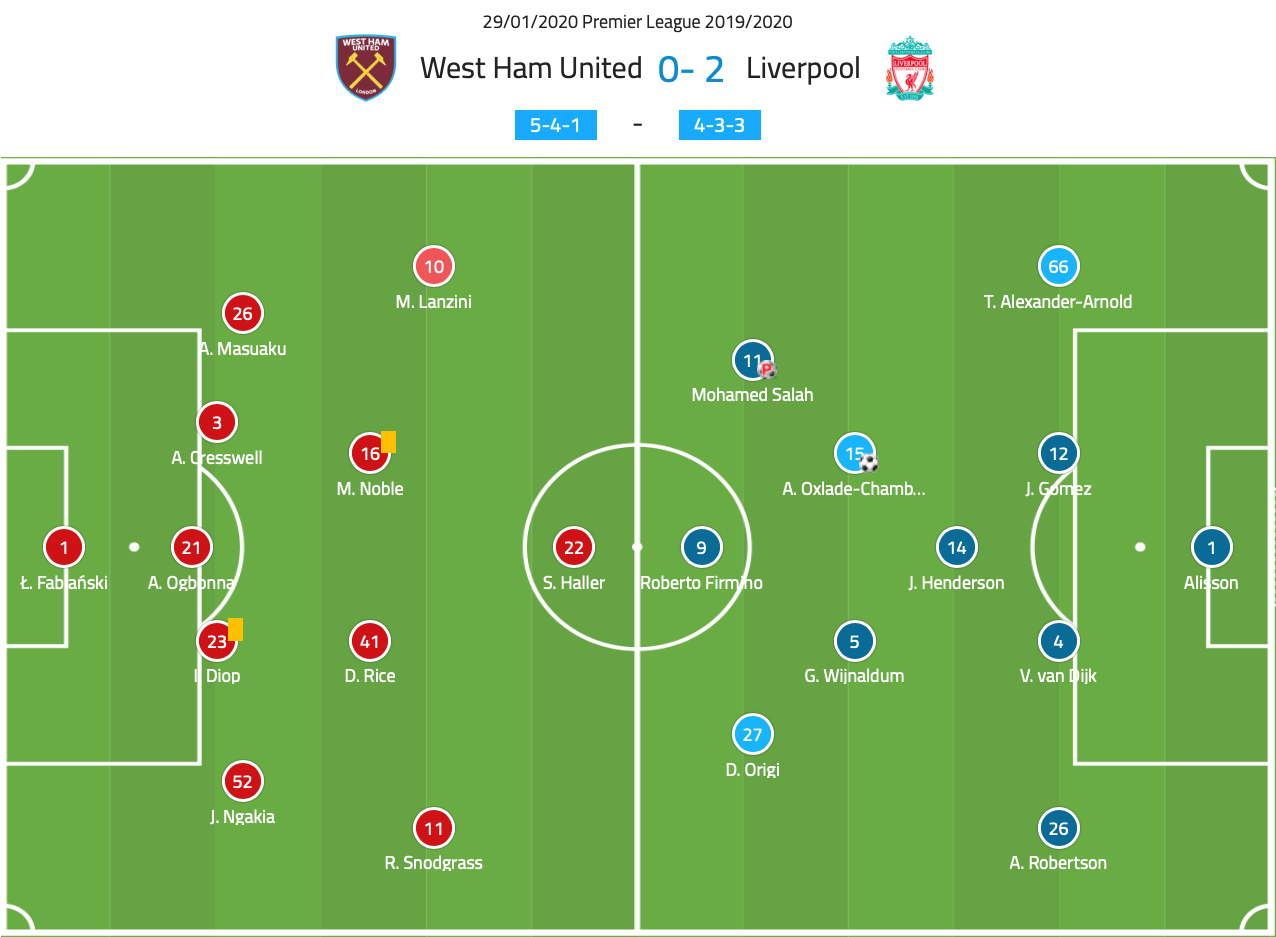 As stated, Moyes fielded his team in a defensive setup, opting for a general 5-4-1 formation. Keeper Łukasz Fabiański has quietly been one of the best at his position this season despite not playing every match, averaging a league second-best 0.42 clean sheets per 90 along with an impressive 1.99 from shots inside the box per 0. 19-year-old Jeremy Ngakia started his first-ever Premier League match at right wing-back, with Arthur Masuaku wide left. Issa Diop, Angelo Ogbonna, and Aaron Cresswell completed the back line as the three centre-backs. Robert Snodgrass, Declan Rice, Mark Noble, and Manuel Lanzini formed the second level of West Ham’s defensive block. Sébastien Haller, who has struggled this season with a mere six goals in 21 starts, started as the lone striker.

Liverpool manager Jürgen Klopp sent out his usual lineup with one exception, as Divock Origi started in place of the injured Sadio Mané. The back four consisted of Trent Alexander-Arnold, Joe Gomez, Virgil van Dijk, and Andy Robertson. Alex Oxlade-Chamberlain started his fourth consecutive league match, alongside Jordan Henderson and Georginio Wijnaldum in the three-man midfield. Mohamed Salah and Roberto Firmino rounded out the starting eleven.

Both teams’ arrangements strongly indicated their respective styles of play. West Ham played in a low to mid defensive block with a fluid wide edge. The front line of the block patrolled the front of the Hammers’ defensive half of the pitch, with the wing-backs moving forward on two types of occasions. 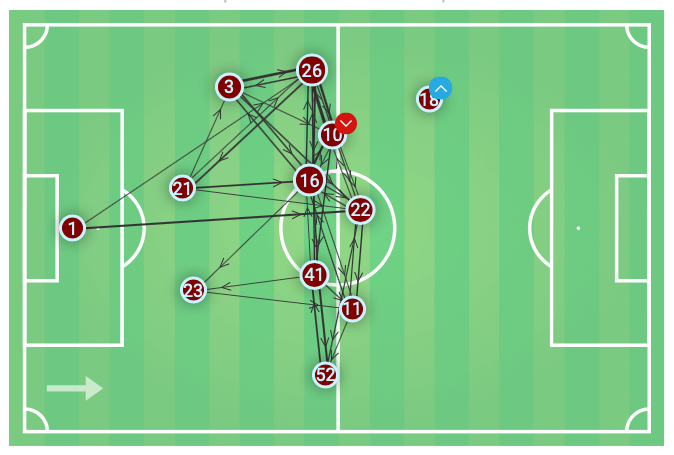 In West Ham’s pass map, we can also see parts of their defensive tactics. The front five remained in their own half of the pitch. The wing-backs additionally joined this line in the wide areas when West Ham held possession in order to attempt fast counter-attacks. 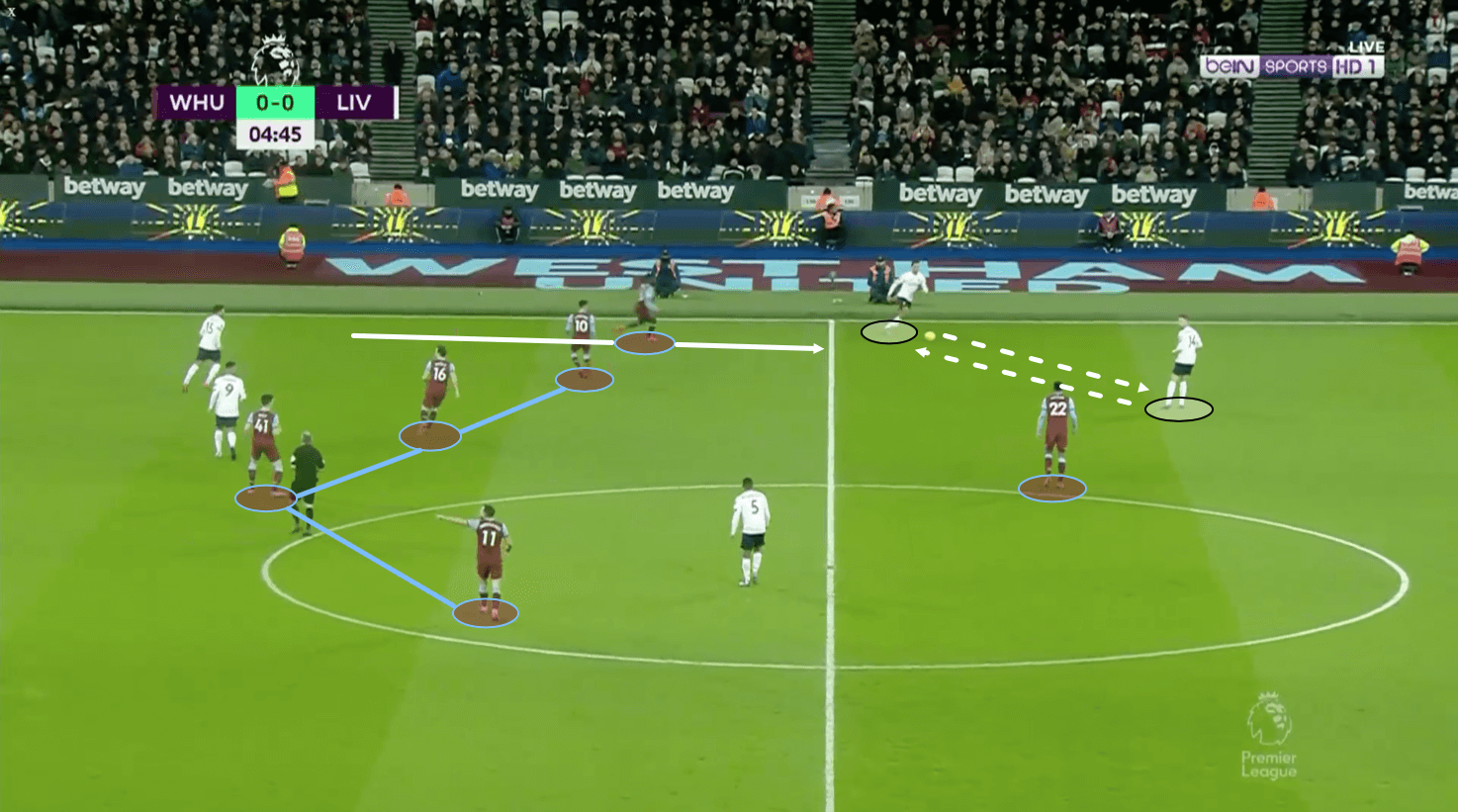 Here we see the other occasion involving the home side’s forward wing-back play. When Liverpool advanced possession wide towards the full-backs, the West Ham wing-backs would press the ball, forcing an immediate back pass. In this example, Alexander-Arnold receives a pass from Henderson, and Masuaku instantly moves forward to press the right-back.

While this isn’t a poor idea by Moyes as Liverpool consistently build attacks through the full-backs, the lack of continuous pressure on Liverpool’s possession meant that the wide pressing didn’t have too detrimental an effect for the visitors. As a result of West Ham’s lack of forward press, Liverpool were allowed to patiently build-up from the back. 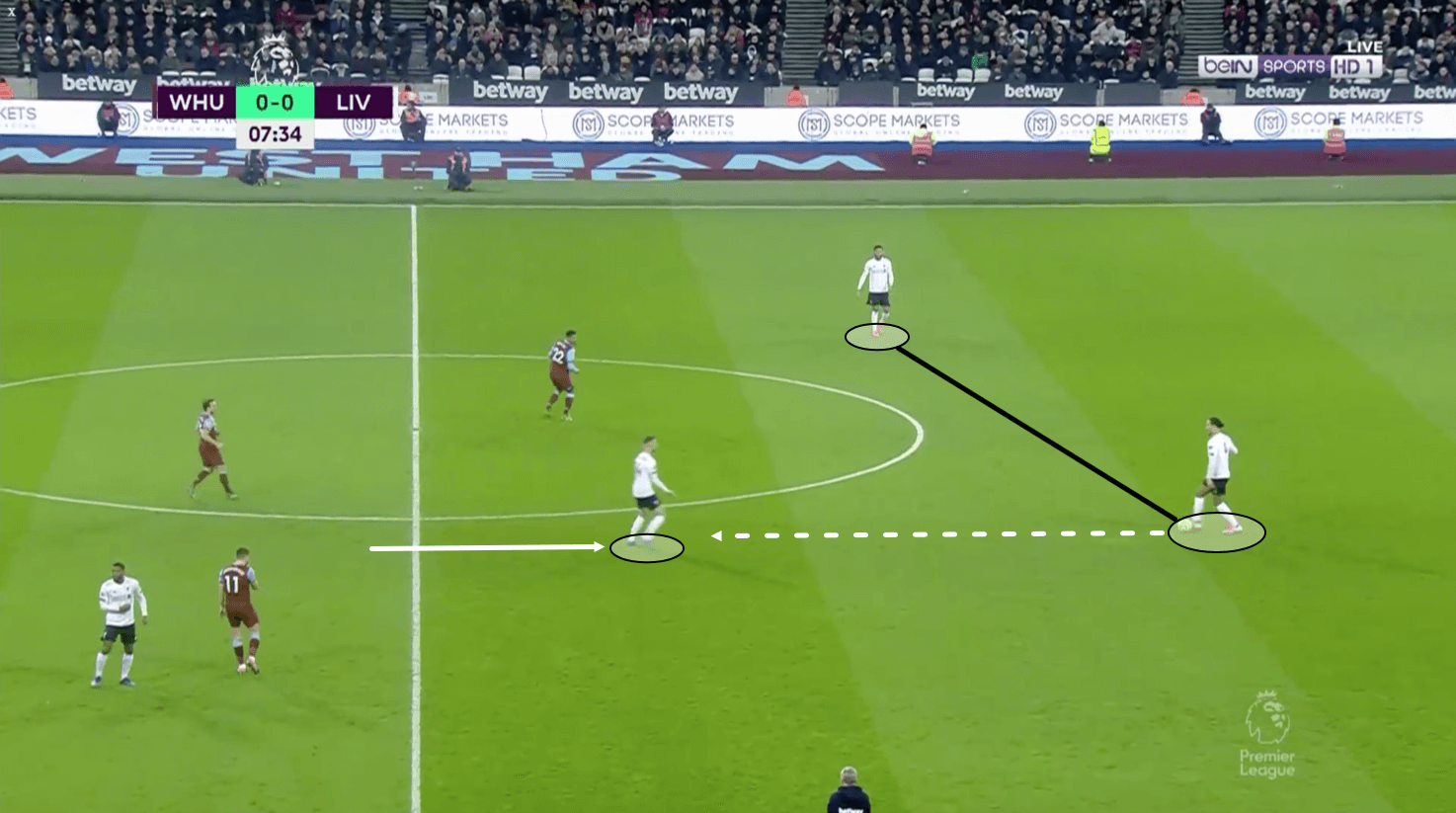 Calm in buildup from the back, one of the Liverpool deeper-positioned central midfielders- Henderson and Wijnaldum would drop back centrally to receive the ball from van Dijk. 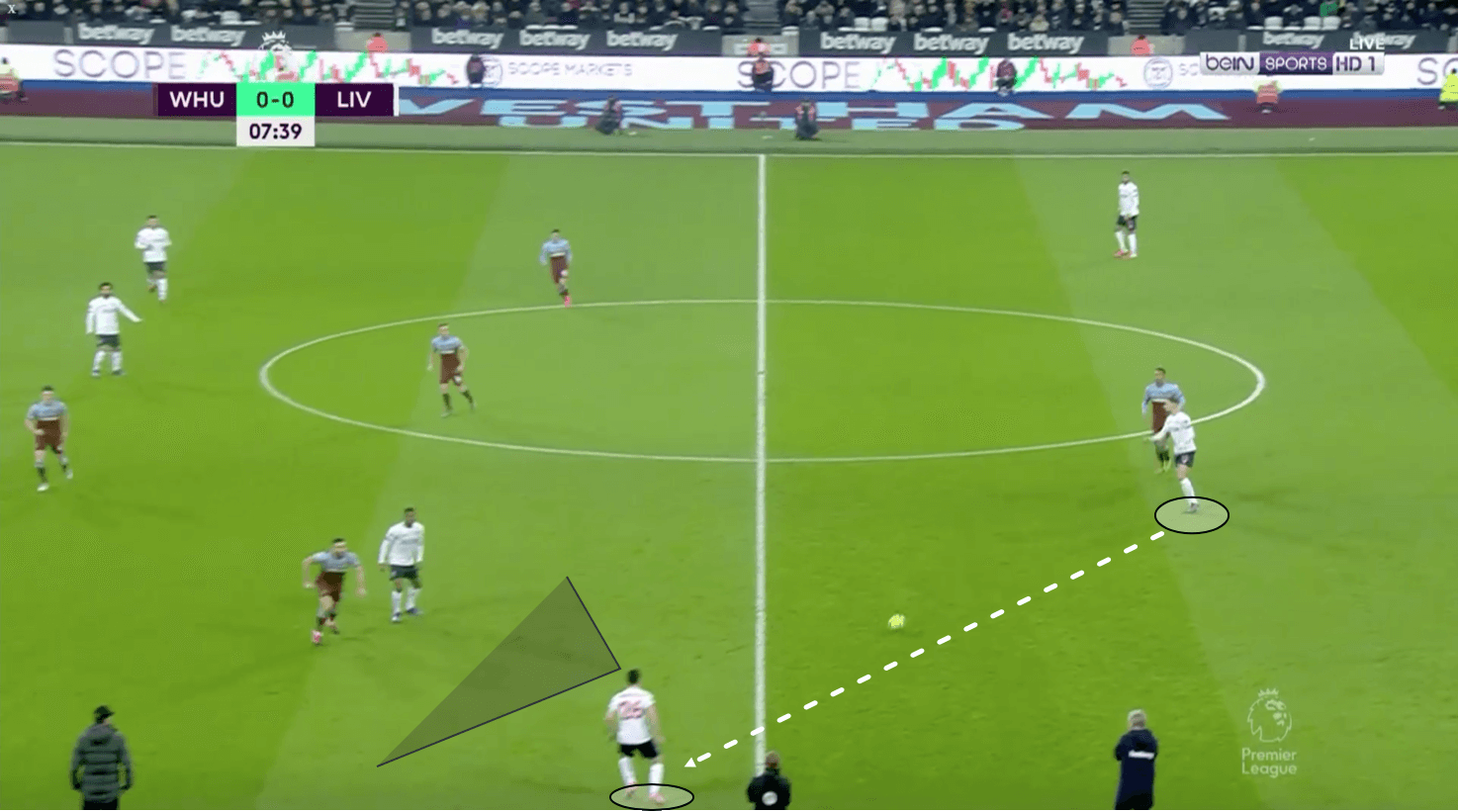 Here, Henderson completes a pass to Robertson on left. While Robertson’s time on the ball is limited due to the wide pressure, the time Liverpool have when possessing centrally is enough to form creative methods of progressing the ball past West Ham’s defensive block.

In past seasons, analysis had proven Liverpool had a tactical reputation for struggling to break down low defensive structures. Now, thanks to some of Klopp’s tactical mechanisms and a group of players with exceptional talent, Liverpool are able to go through and around these structures using a variety of methods. 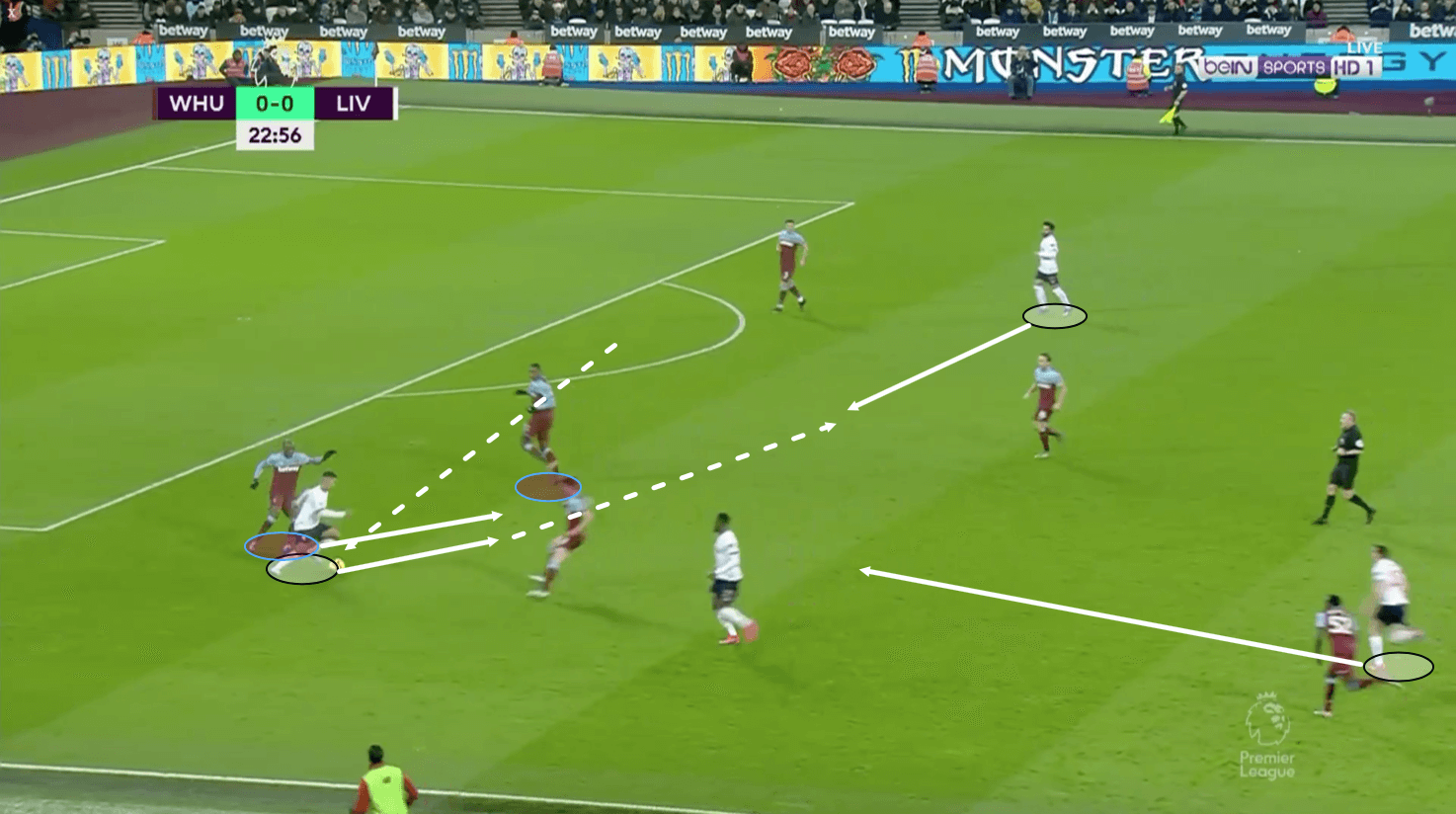 One route in which Liverpool advanced the ball was through long balls over the midfield line. In this tactically outstanding scenario above, Firmino brings down a long ball from Robertson. Ngakia, who was pressing high and wide as the wing-backs were instructed, tracked back alongside Robertson after the pass. Firmino then dribbled back diagonally into the half-space and completed a pass to Salah. 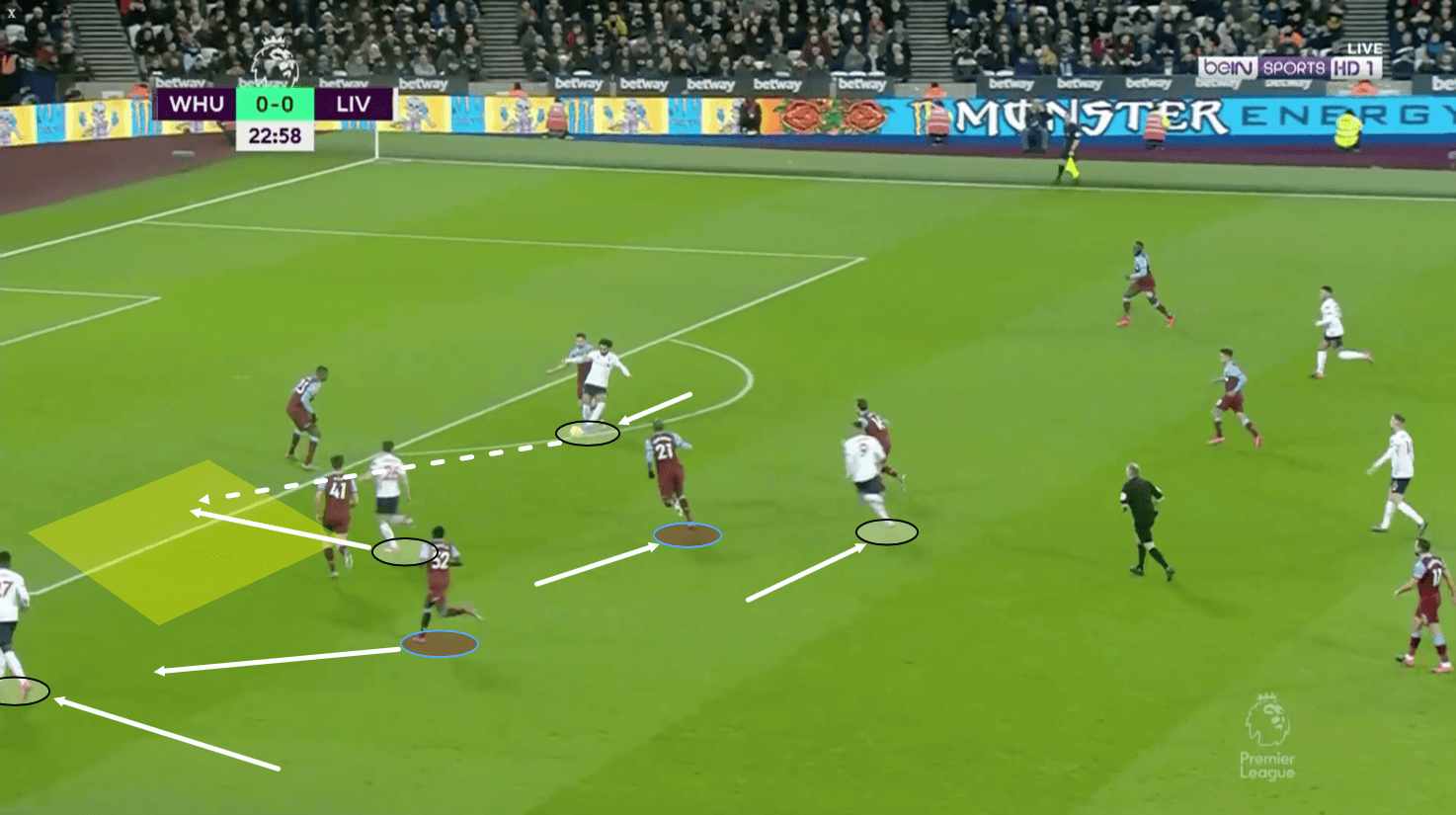 Firmino’s central shift, along with Origi’s wide run, both successfully pull any defenders out of the area the right centre-back would typically occupy. Robertson completes his run into this space, Salah completes a pass to the left-back, and the long ball attack nearly results in a goal.

Another aspect of Liverpool’s successful maneuvres around West Ham’s defence was the concept of short, quick passing combinations. 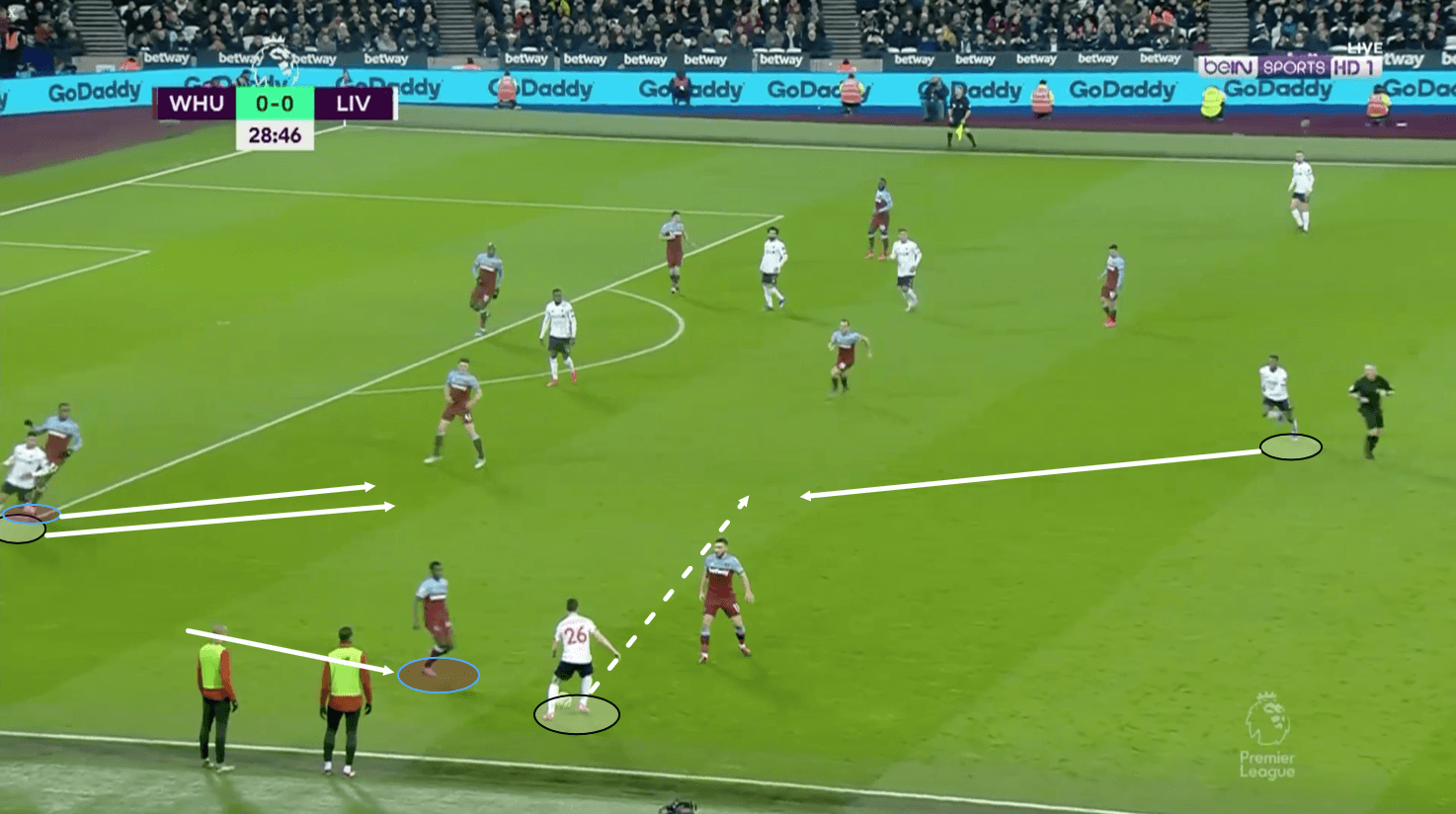 Not too dissimilar to the previous scenario, these combinations can be used to exploit space. Here we once again see Robertson on the ball, Ngakia pressing the full-back, and Oxlade-Chamberlain (in place of Firmino) retreating into the half-space. Robertson completes a pass inside to Wijnaldum in space. 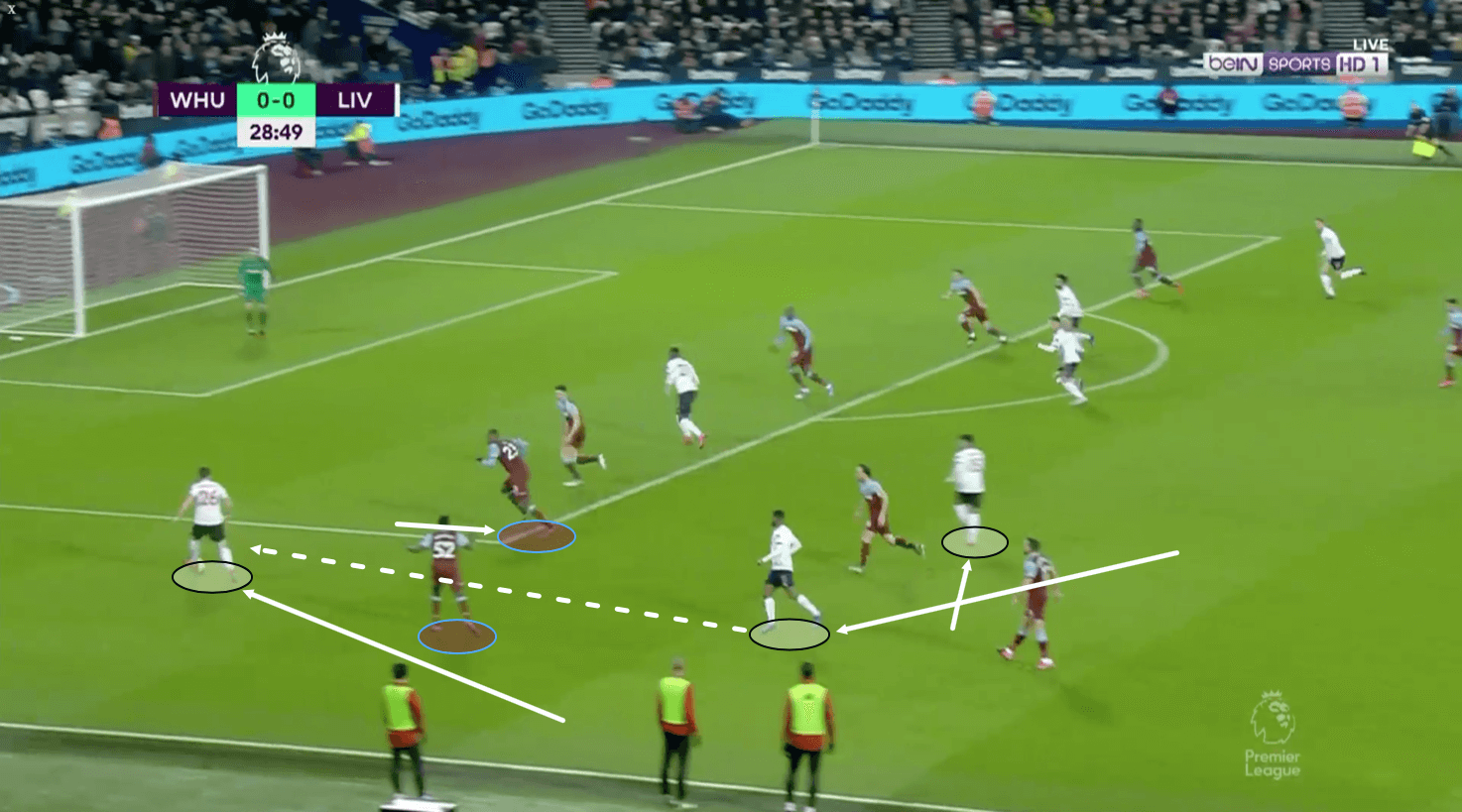 Oxlade-Chamberlain’s run pulls Diop out just enough for Wijnaldum to reconnect with Robertson on a through ball. Robertson then has space and time to complete a quality cross into the box.

Liverpool eventually scored the first goal utilising the long ball method. Firmino brought down a long ball from Alexander-Arnold and completed a pass centrally to Origi. West Ham’s lack of organisation against such a quick progression of the ball resulted in poor tackling technique and thus a penalty, which Salah sharply converted.

After the opening goal, West Ham began to control more possession. With this, West Ham attempted progression via long balls to Haller, who would bring the ball back down for Lanzini or other midfielders to execute switches of play into open space. 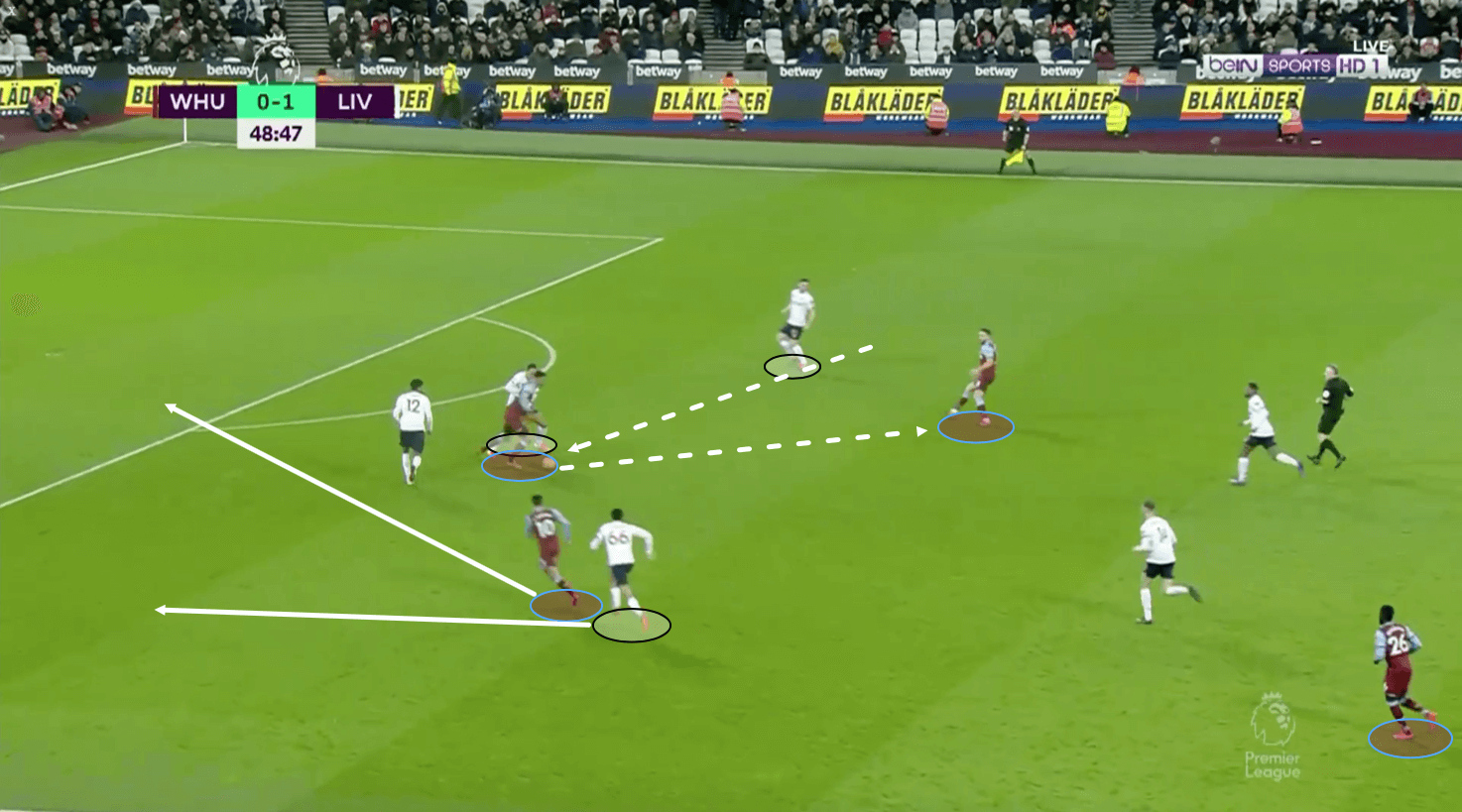 Haller is one of the few strikers in the Premier League who can actually hold off Van Dijk using his strength. In this picture, the Frenchman controls a long ball from the left-back Masuaku while fending off the centre-back, and relieves the pressure with a back pass to Snodgrass. Lanzini makes a run into Liverpool’s box behind the centre-backs. 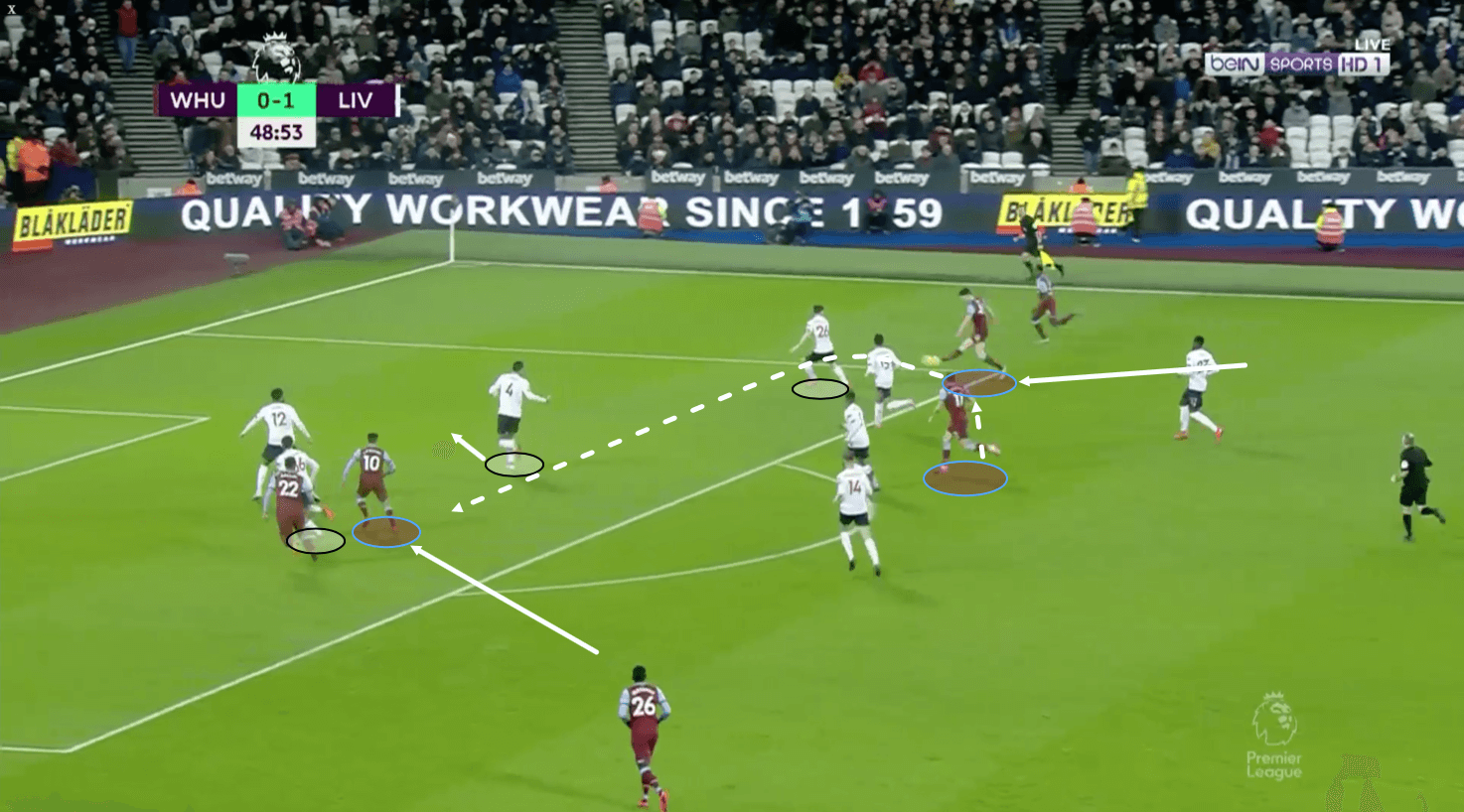 Snodgrass then passes wide to Rice, effectively finishing the switch of play from Masuaku on the left to the right. This device spread out Liverpool’s defence, and due to this Rice was able to cross the ball centrally to Lanzini who received the pass in a dangerous area.

While West Ham’s increase in possession may have only slightly increased their scoring opportunities, it also increased Liverpool’s. With a surge in the number of players pushing forward, more exploitable space opened up behind them. 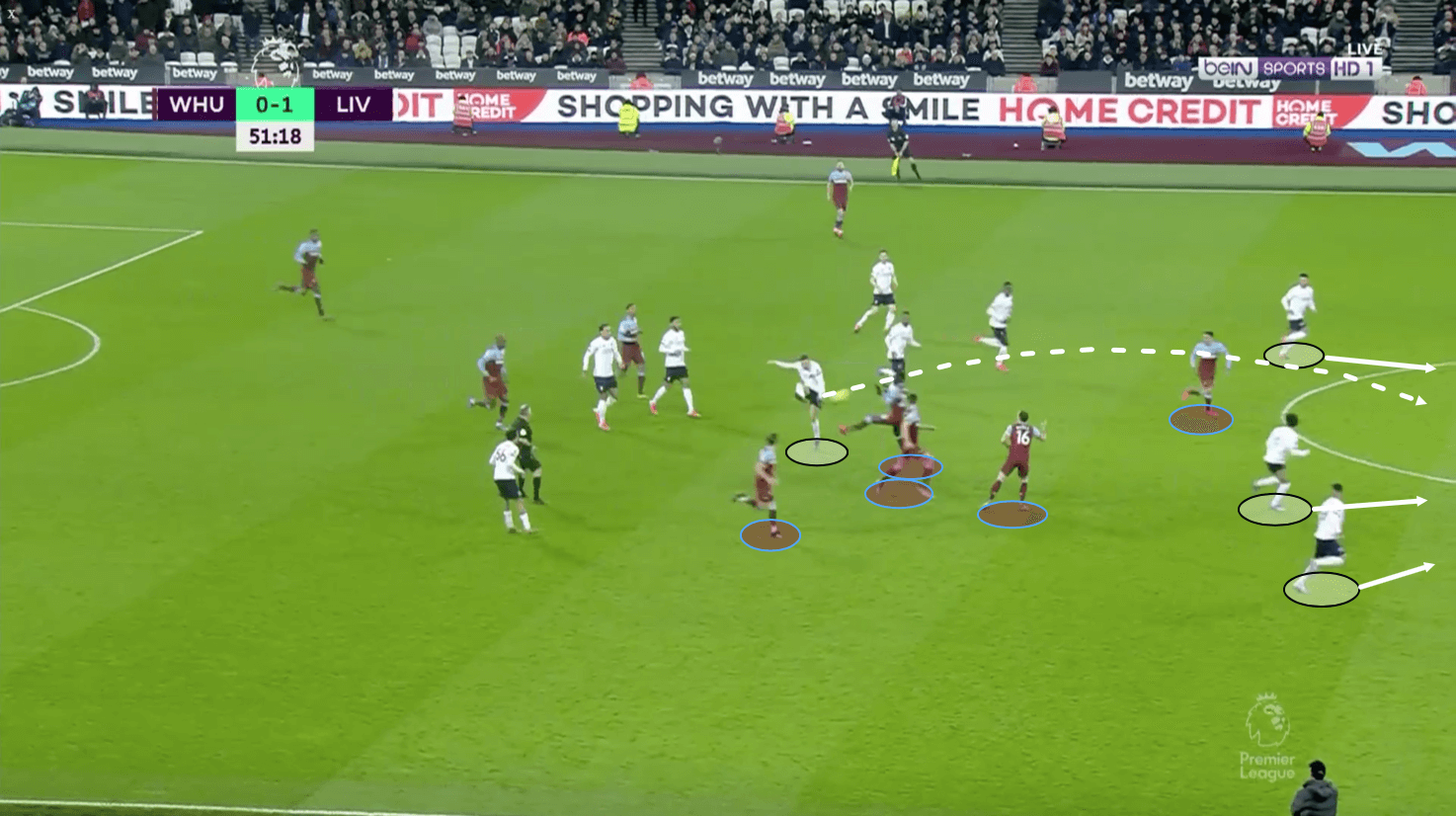 In this sequence, after Van Dijk cleared a West Ham corner kick, a high number of claret and blue shirts were caught high up the pitch. Henderson hits a pass over rest of the opposition, and Liverpool find themselves with a numerical advantage on a counter-attack. This results in Liverpool’s second goal. 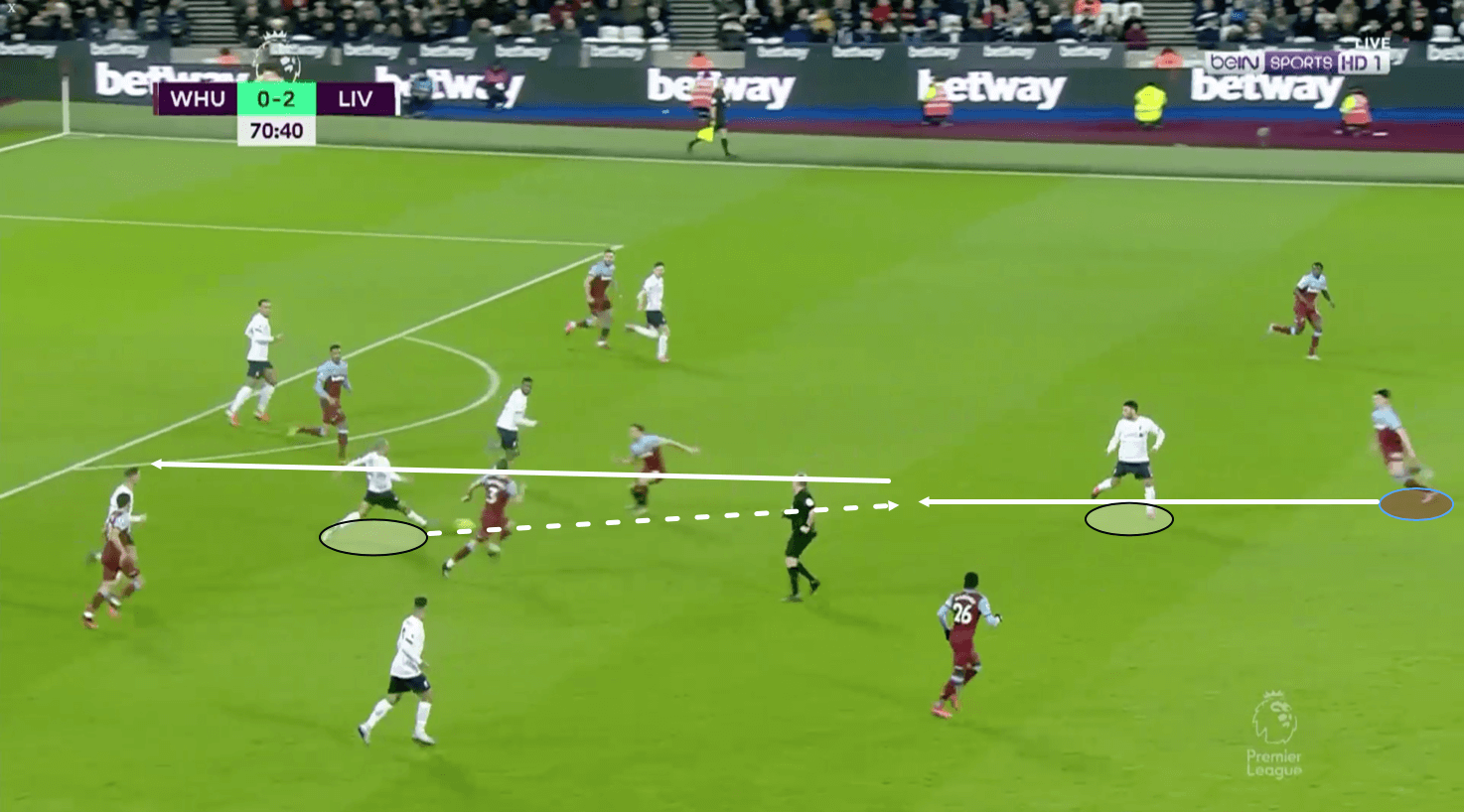 Here, Fabinho commits a poor touch on a pass to Oxlade-Chamberlain. Rice presses the ball and intercepts before dribbling through two defensive lines to achieve a high-quality shot on target.

Despite the 0-2 scoreline, the xG on the match was 1.19 to 2.04, and this chance was likely a major part of that number for West Ham. Nevertheless, Liverpool held on as they fended off any remaining attacks.

Liverpool weren’t on their best night, but the gap in quality between the two sides was big enough for them to control the match throughout. The attacking tactics set out by Klopp brilliantly bypassed West Ham’s defensive block, and the individual skill of the defensive players in his side were able to halt West Ham from scoring on the few opportunities they had. This win marked the first time ever that Liverpool have beaten every team in the top flight in a single season, and the club is now on a 41-match unbeaten Premier League run, only eight behind the all-time league record of 49, set by the Arsenal Invincibles.

This Reds squad relentlessly continues to prove what can happen when a manager is given time and resources at a club, and when the players involved not only fit the tactics of said manager but also buy into the system and organisation as a whole. Liverpool will play Southampton and Norwich next, followed by the Champions League round of 16 first leg against Atlético Madrid. West Ham meanwhile will continue their fight to stay out of the relegation spots on the table with a meeting against Brighton before a difficult stretch on the schedule includes playing five of the Premier League “big six” in just seven matches.