Using data to identify a new left-back for Liverpool

In the modern game, the fullback positions are becoming more and more important. Gone are the days when this was a position in which to place players that maybe did not have the quality on the ball to play elsewhere. In today’s game with the prevalence of counter-pressing, there tends to be space in the wide areas and this is where the fullbacks can be key components to the attacking game model of a team. Nowhere is this more the case than at Liverpool where Trent Alexander-Arnold and Andy Robertson are two of the key players for Jurgen Klopp’s side when it comes to progressing the ball. With the German coach preferring a less creative and more functional midfield three, we often see the onus falling on the fullbacks to connect the team together and find ways to move the ball into the feet of the front three. While TAA and Robertson are perhaps the best fullback pairing in football today we have to acknowledge that football is a squad game and there is not a lot of depth at the left-back position. At right-back, the academy graduate Nico Williams has shown flashes of promise that suggest that he would be comfortable if asked to fill in if TAA was injured or in need of a rest. On the opposite side, however, there is no ready-made cover in place. James Milner can still fill in at left-back but his time as a first-team player is finite.

The purpose of this piece then is to use data to identify a left-back who can act as cover for Robertson with a view to perhaps replacing him in the next few seasons we will then provide a tactical analysis of the players that we identify. As such we have filtered our data to only include players under the age of 24 that are playing in leagues that either have a high standard of competition or that have a track record of producing talented footballers. Given the importance of the fullbacks to the way that Liverpool play, we will concentrate on how these prospective fullbacks play in possession of the ball. 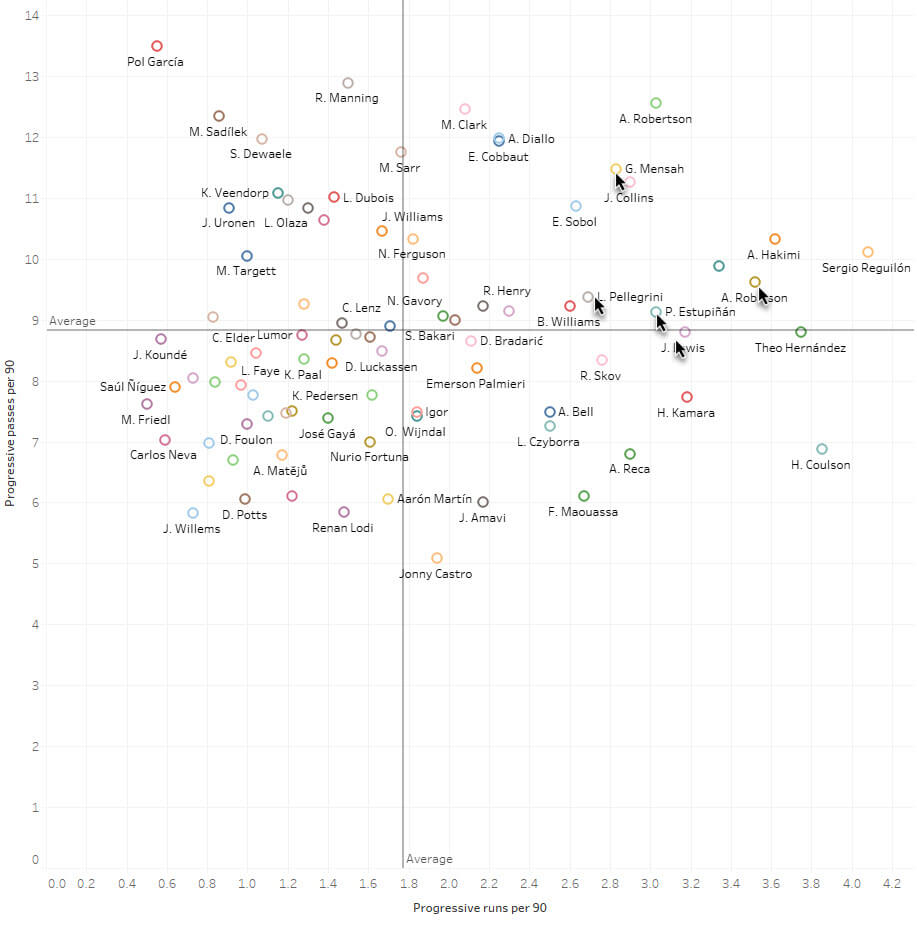 The first check that we made was on each player’s progressive passes and progressive runs per 90 minutes. These are obviously key metrics given the fact that the Liverpool fullbacks almost act as playmakers for their side. When running data in this manner it is always interesting to note whether it passes the eye test in that there are players within the matrix that make sense. We can see that Andy Robertson figures prominently at the top right of the scatter graph. We have then identified five players who based on some prior knowledge would represent interesting options for the recruitment team at Anfield. The first of those would mean Liverpool going back to a familiar source for players with the 21-year-old Ghanian left-back Gideon Mensah being on loan at Zulte Waregem from Red Bull Salzburg. Next, we move the English Championship with the Wigan Athletic fullback Antonee Robinson performing well in terms of progressive runs especially. Next comes an Ecuadorian left-back who has been in the Watford system for some time now. Pervis Estupinan is now 22-years-old and a full Ecuador international. He is currently on loan at Osasuna in La Liga and has been impressing this term in Spain. Liverpool have in recent seasons displayed a tendency to recruit from teams who get relegated to the Championship and unless we see a huge improvement from Norwich City then Jamal Lewis could be the next in line to make that move to Anfield instead of to the Championship. Finally, we go to Italy and Serie A and to Cagliari where Luca Pellegrini is impressing on loan from Juventus.

Next, we will take a closer look at how effective these fullbacks are when in possession of the ball. 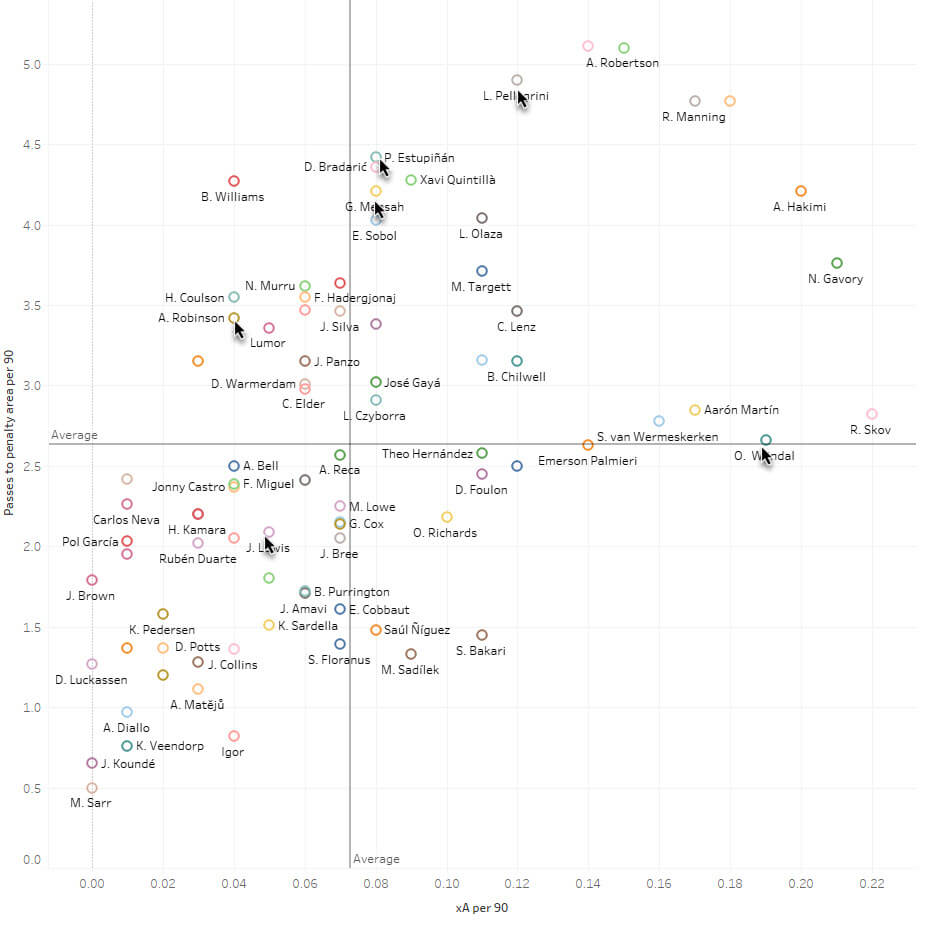 Now we are comparing the number of passes played into the penalty area per 90 minutes compared to expected assists per 90. We should also qualify this but saying that team playing style is very much a consideration when assessing these metrics in a scatter graph. Look at Jamal Lewis for example. Firmly in the less impressive bottom left quadrant but considering the problems that Norwich have in the attacking phase it is no great surprise that this is the case. In circumstances like this, we have to check through video and live scouting to confirm the picture that the data is painting. Once again we see that Andy Robertson is a stand out followed by Luca Pellegrini, Pervis Estupinan and Gideon Mensah. Antonee Robinson is another who is performing worse than we would perhaps expect. His numbers are promising in terms of passes into the penalty area but his xA is the lowest on our shortlist. Based on the above data I have added another player to consider with the AZ Alkmaar fullback Owen Wijndal performing well in terms of xA.

So, now that we had identified six players we can use data to further define their output and gain an insight into their game style. To begin with, however, it is helpful to get an idea of what Liverpool already have in this position.

Looking at Robertson’s key metrics we see what makes him a stand out player. His ability to progress the ball with 12.56 progressive passes per 90 and 3.03 progressive runs per 90 are excellent. He also performs well in terms of defensive duels although Liverpool tends to dominate the game in possession with that said Robertson still has a success rate of 60.63% from 5.35 duels per 90 minutes.

Luca Pellegrini has been performing well for a Cagliari side that has been outperforming expectations so far this season, with that said however they are starting to fall down the table now. Still, though Pellegrini has been impressing with his output and participation in the attacking phase. 9.38 progressive passes per 90 and 2.69 progressive runs per 90 are impressive and Pellegrini also has 4.90 passes into the penalty area with 0.12xA per 90. As you would expect from an Italian player Pellegrini is also strong out of possession with 7.24 defensive duels per 90 and a success rate of 55.24%.

Out of all of the players on our shortlist, Gideon Mensah is perhaps the most intriguing. He appears to fit the profile of what we are looking for as a backup to Robertson with 11.48 progressive passes and 2.83 progressive runs per 90 minutes. Mensah stands out as performing a key role in his sides attacking game model. Mensah is averaging 4.21 passes to the defensive third per 90 minutes but his xA per 90 is only 0.08. This is likely directly attributable to the fact that Zulte Waregem are struggling for goals this season and sitting in 8th place. In the defensive phase, Mensah has 9.59 defensive duels per 90 with a success rate of 59.09%

The data for Lewis has to be viewed through the lens of Norwich’s season to date and the struggles that they have had. With that said, however, Lewis still pops out in terms of his output, far more than some other highly rated young players in the Norwich squad. 8.80 progressive passes and 3.17 progressive passes per 90 are impressive for a young player who is with a team in relegation trouble. Only 2.09 passes into the penalty area and an xA of 0.05 are a concern but again must be taken in context. Defensively Lewis does impress in relation to the others on our list with 8.44 defensive duels and a success rate of 65.81%

Osasuna are sitting comfortably in mid-table in La Liga and Esupinan has been one of their most impressive players. 9.13 progressive passes and 3.03 progressive runs per 90 minutes are impressive numbers. Once again his number of passes into the penalty area 4.42 per 90 and xA per 90 of 0.08 are less than ideal but once again they have to be viewed in the context of the attacking output in general at Osasuna. Esupinan is another who is good defensively with 8.43 defensive duels per 90 and a success rate of 66.47%

The Wigan Athletic youngster has recently been linked to a move to Milan which suggests that the Italian giants are getting more comfortable with the use of data in their recruitment. 9.61 progressive passes per 90 minutes and 3.52 progressive runs are standout numbers in a side that is facing relegation in the Championship. As with some of the others, however, his creativity is less with 3.42 passes to the penalty area per 90 and an xA of 0.04 per 90. Defensively Robinson manages 8.14 defensive duels per 90 with a success rate of 64.61%

The Dutch defender did not pop when looking at the initial data set with his ability to progress the ball not appearing immediately. There is a change that this is down to the playing style of AZ Alkmaar who look to attack through their creative wide players. He is averaging 7.42 progressive passes and 1.84 progressive runs per 90 minutes. With 2.16 passes into the penalty area per 90 he is still registering an impressive 0.19xA per 90 which shows the quality of chances he is creating. Defensively he is averaging 5.63 defensive duels per 90 with a success rate of an impressive 70%.

So, we have a shortlist of six players but if we were to cut that down still further in order give us a list of two players to produce scout reports on then we have to make some tough choices. The first player that stands out as someone who fits the Liverpool style of play is Gideon Mensah. The Ghanian youngster already has experience of playing in a similar style given his history at Red Bull Salzburg. He is young enough to suggest that he would be happy with a squad role at Anfield in the first instance but there is enough about his output to suggest that he will be able to develop further in a positive coaching environment.

My first choice as the second player to take forward was the Italian Luca Pellegrini but it may be difficult to get him out of Juventus, at least at this point, another season on loan may change that picture. Instead, with an eye on the homegrown quota at the club, I would be tempted to target Jamal Lewis at Norwich. His numbers may not pop as much as some others but I would be curious to see how they look up against those generated by Andy Robertson in the season that he got relegated with Hull City.

The next step in this process then will be to produce scout reports on these two players.