The highlight of this week’s Premier League fixture will for sure be Liverpool vs Manchester United. As their encounter back in October at Old Trafford ended in a 1-1 draw, Manchester United remain the only team so far to take home a point from Liverpool in this Premier League season. With already 61 points after 21 matches, Jürgen Klopp and his team seem unstoppable on their way of winning the title. Manchester United, on the other hand, are still hoping to catch Chelsea and finish fourth, which would ensure the qualification for the UEFA Champions League. Being four points short of Chelsea, the Red Devils are in a position where every win counts right now. Our tactical preview will show how Manchester United will probably try to accomplish the impossible task of beating Liverpool. We will provide a tactical analysis explaining the key factors to watch out for in this highly awaited matchup. Doing that, we will examine the tactics of both teams. 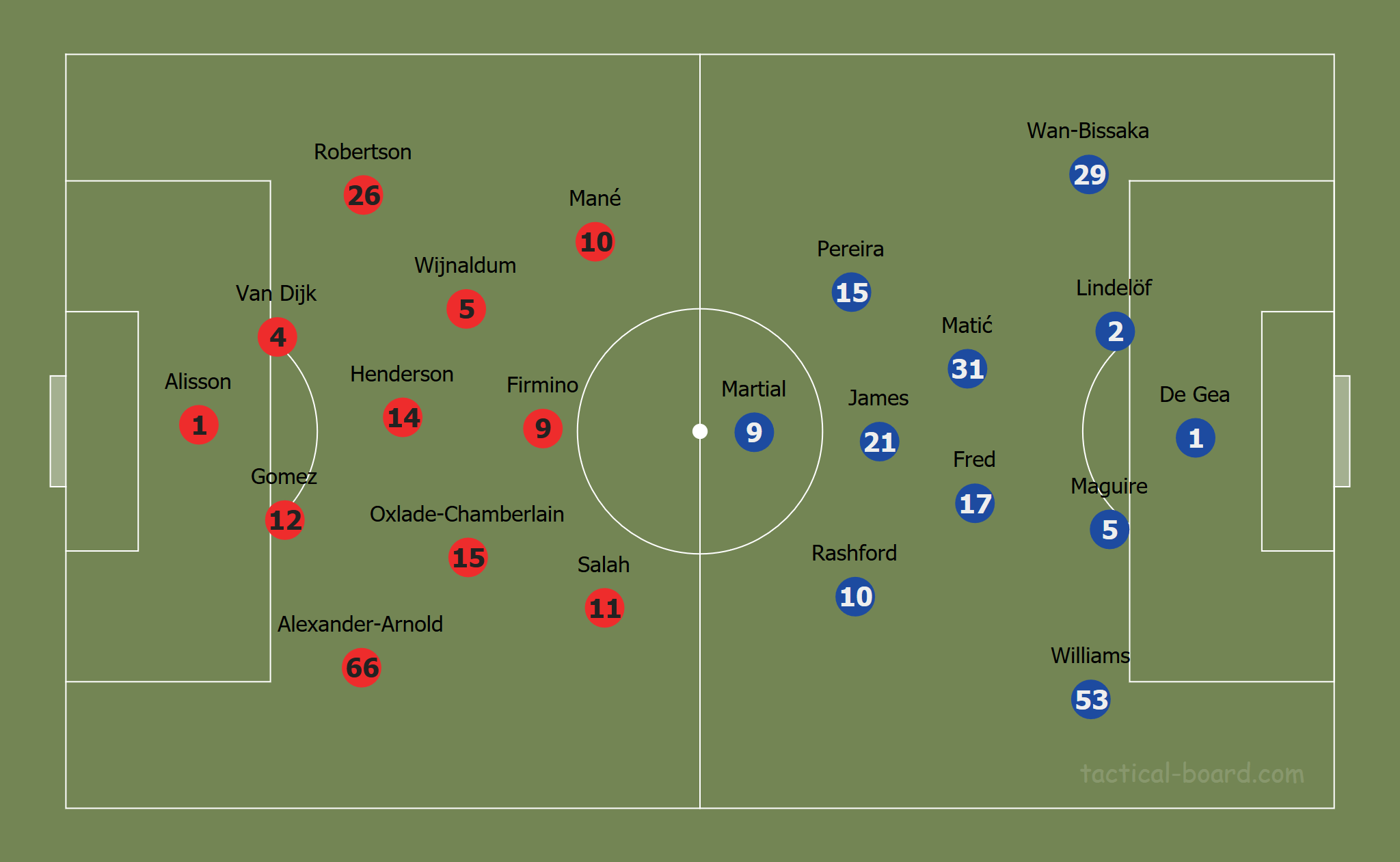 Probably, both teams will decide on starting with the best team available to them.

Liverpool’s starting XI seems pretty straightforward. Even though injured players like Dejan Lovren, Fabinho or Joel Matip are recovering well and are even back in training, it is not very likely that Klopp will start with them right away from the start of the game, especially in such a tough game. James Milner and Nathaniel Clyne definitely remain out.

Looking at Manchester United, the biggest question mark will be on whether or not Ole Gunnar Solskjær will take a risk and start Marcus Rashford, who has been substituted off in the FA Cup after only 18 minutes. Since Rashford is United’s most important player right now, it is a tough question to answer. A bigger injury would hurt them a lot in the current situation. In case Rashford does not play, Juan Mata will most likely take his place. With Paul Pogba, Scott McTominay, Luke Shaw, Axel Tuanzebe, Marcus Rojo, Eric Bailly and Timothy Fosu-Mensah out for the game, Solskjær and United are in a difficult position. Nonetheless, the starting XI can be quite deadly still.

Liverpool under Klopp are famous for their great pressing game. Winning the ball high up the pitch and immediately using the short distance to the opponent’s goal for a quick shot is a dominant factor of Klopp’s philosophy. For opponent teams, preventing mistakes during build-up thus becomes inevitable if you want to beat Liverpool.

In October, Solskjær had used a back five to tackle this issue, as can be seen in the image below. 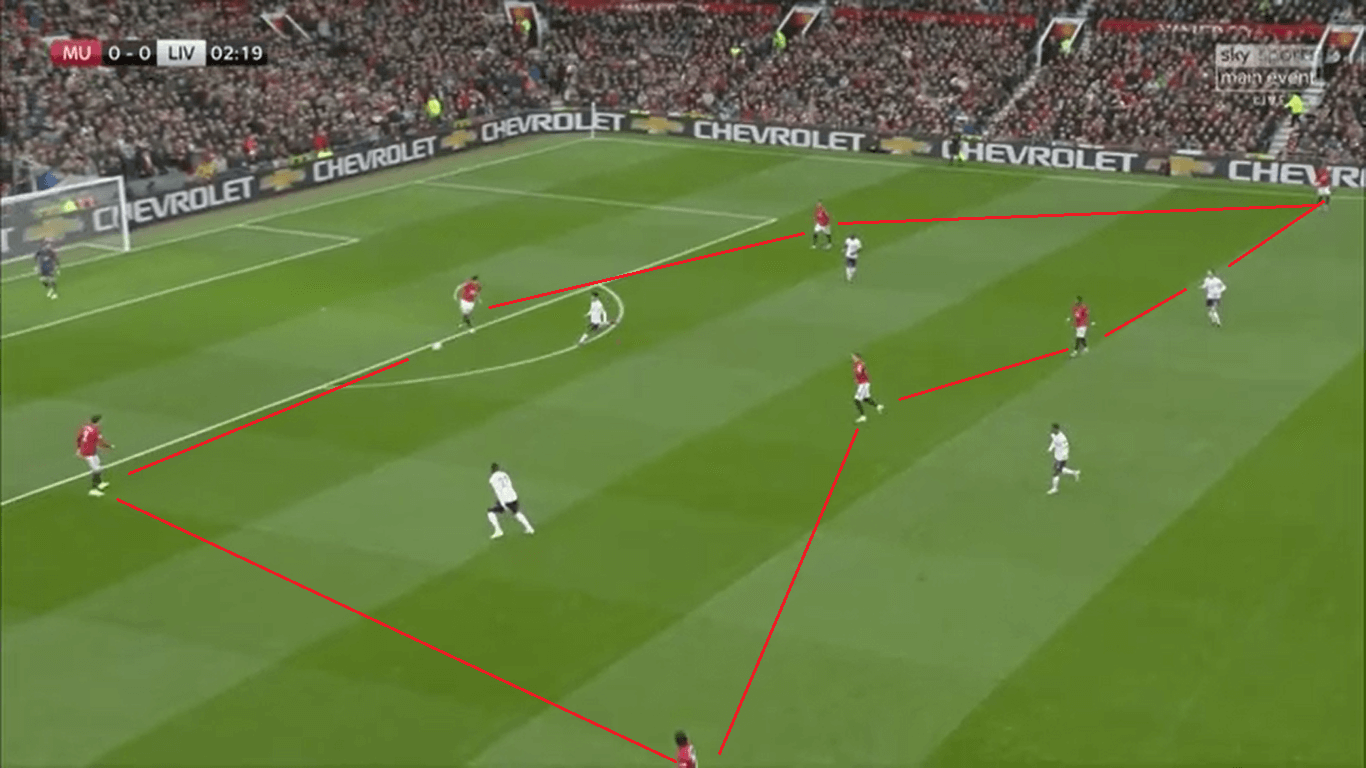 The full-backs pushed a bit higher so that a 3-4-structure occurred in the build-up phase. Counting goalkeeper De Gea, United has an eight to five advantage in this situation. Liverpool’s approach to such a situation is aggressive in the centre. They attack the centre-backs man-to-man, same as the central midfielders. The goalkeeper and the full-backs are undefended. For United, as mentioned before, the aim is to keep the ball in their rows.

Liverpool’s build-up, on the other hand, has a somewhat different purpose. Looking at the image below, we see that they try to use as fewer players as possible during build-up. 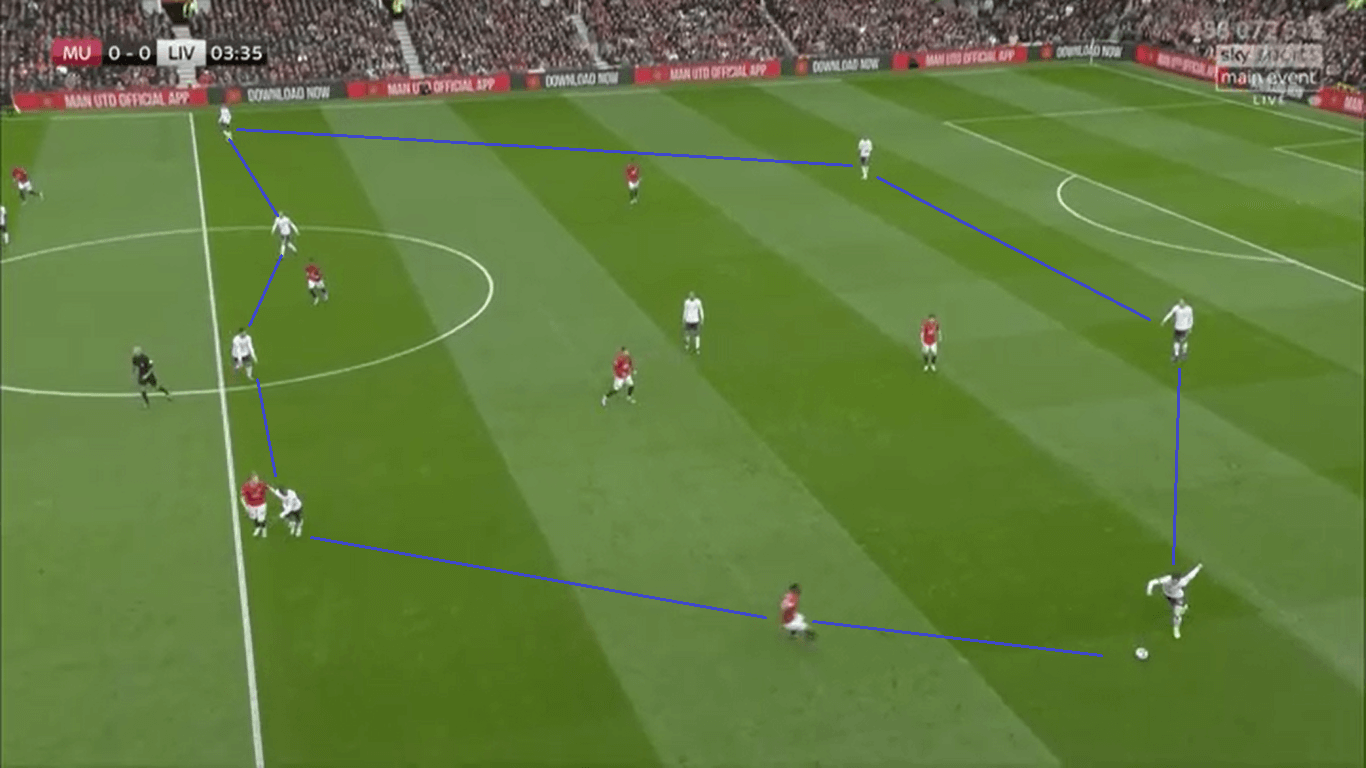 The structure can be described as a 3-1-4 in this image with Alexander-Arnold pushing extremely high. While numerically, there are even more players now in this image than in the one with United’s build-up, we have to keep in mind that this image contains a lot more space, precisely Liverpool’s own half as a whole.

However, Manchester United do not have to play a high press and attack Liverpool’s build-up. In that case, Liverpool’s much-improved possession game comes into play, if United try to defend deep. Back in October, Solskjær tried to close the centre. 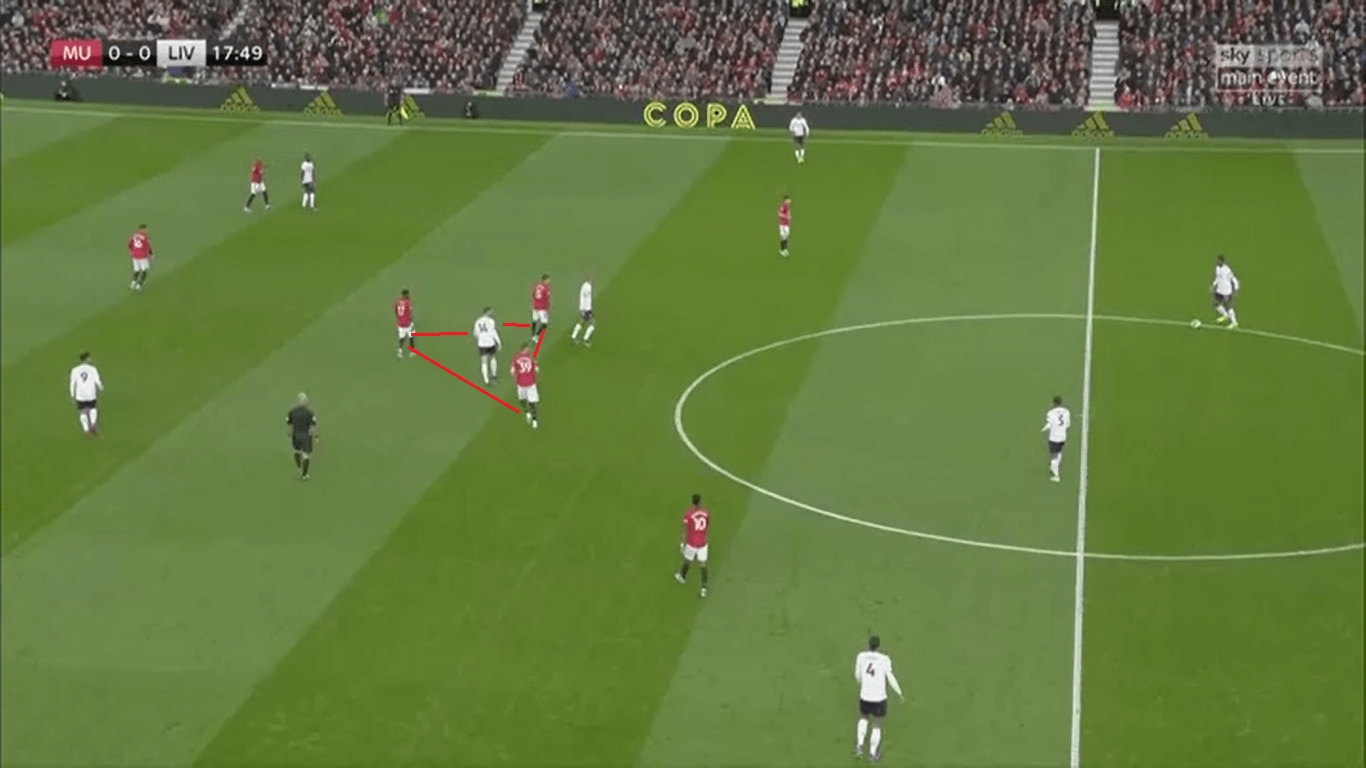 Three United defenders tightly marked Henderson and Fabinho, so that playing through the centre was no option. Rashford and James kept an eye on the wings in case of a pass out to the wing-backs. Liverpool tried to solve this issue with Wijnaldum falling back into the open space. As soon as he receives the ball, Pereira moves aggressively forward, as we see in the image below. 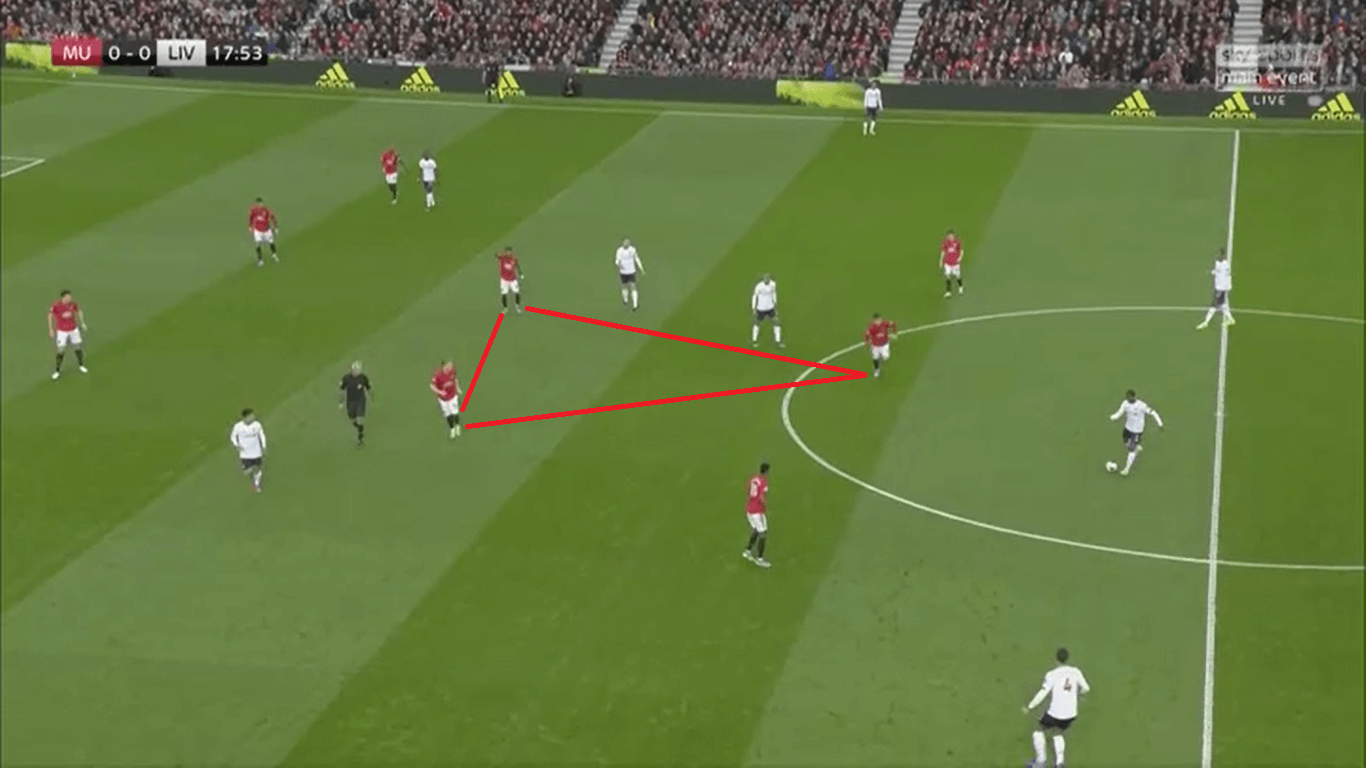 Here, Manchester United seem to have defended properly. Nonetheless, Liverpool’s great off-ball movement still creates threats for United. Here, it is Firmino between the lines moving into the open space. He does not receive the ball, but it is still difficult to keep track and defend properly. 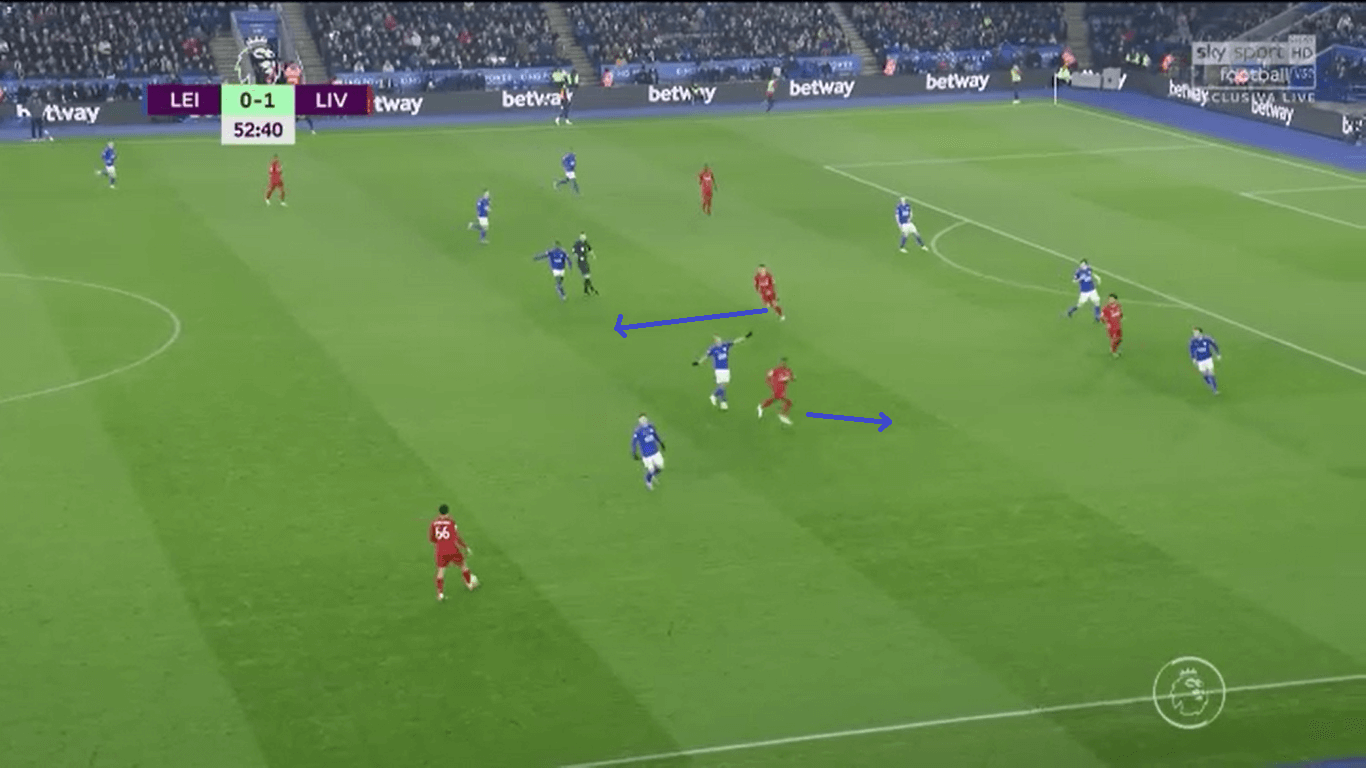 Exemplary, we can have a look at the image above. Alexander-Arnold has the ball on the right-wing. Wijnaldum makes the move from the centre into the right half-space, opening space for Firmino, who falls back. This, on the other hand, opens space up-front for Mané and Salah. These constant movements are difficult to foresee and even more difficult for the opponent to defend. 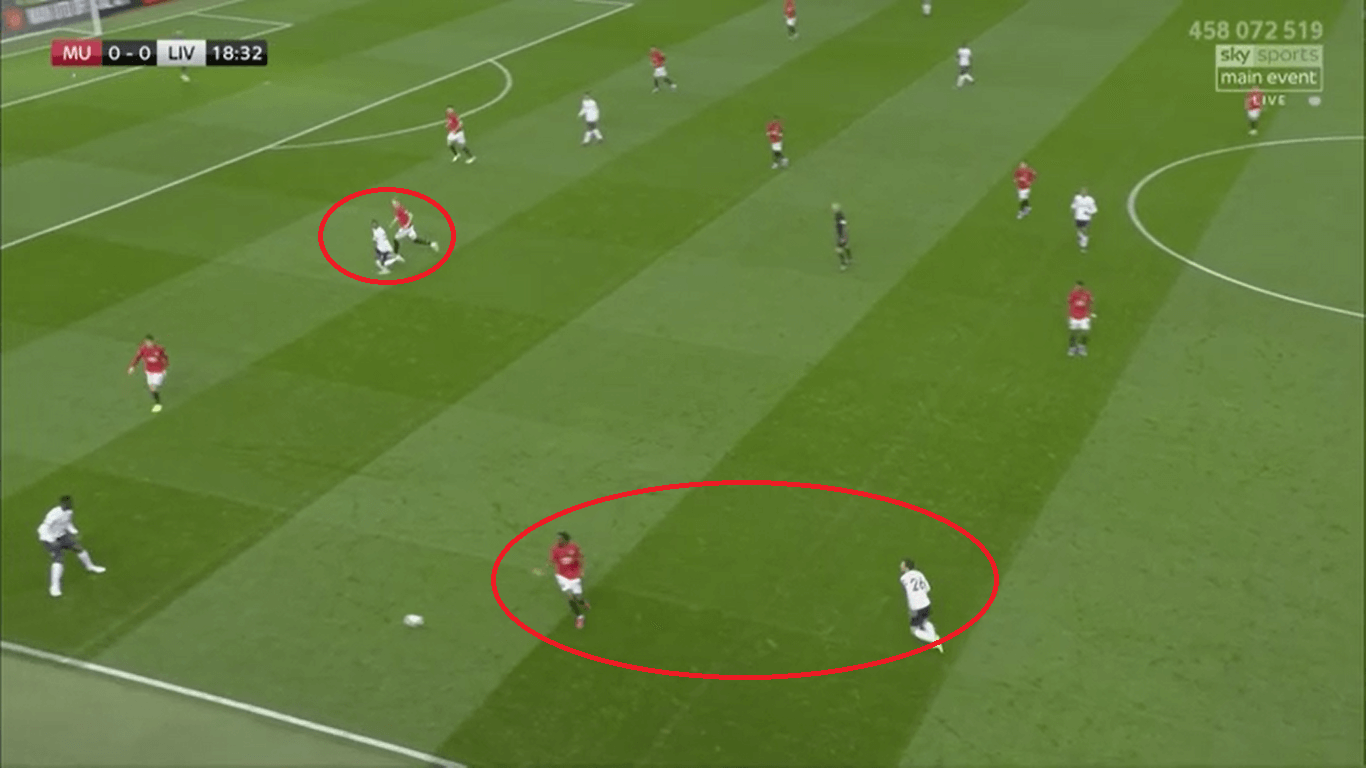 Here, we have a similar example. Robertson has the ball on the left-wing. Wan-Bissaka tries to oppose him and moves out. Robertson plays the pass longline to Origi. Again, Wijnaldum makes a deep run, forcing McTominay to follow him. This opens space in the left half-space where Robertson can make an underlapping run.

United tried to defend these movements with strict and aggressive man-to-man defence, like in the image below with Maguire following Firmino. 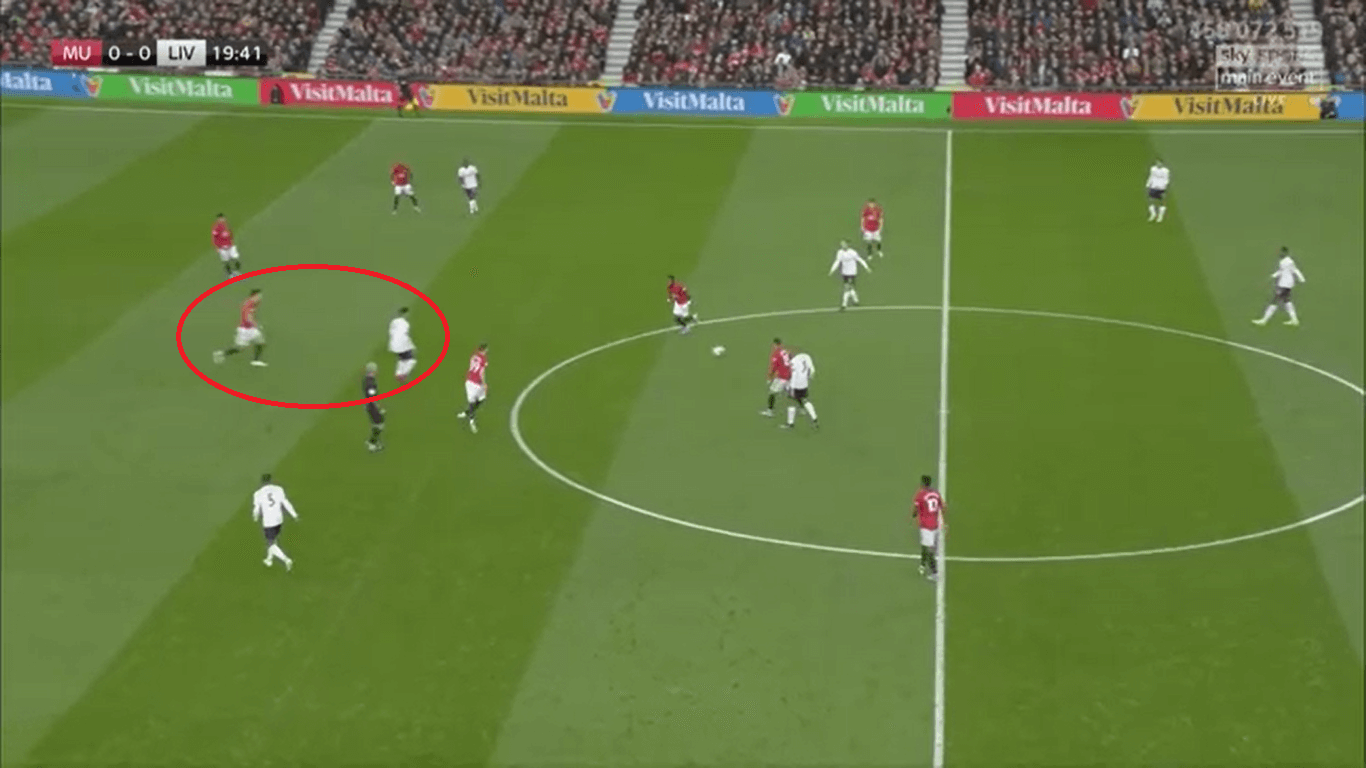 As a whole unit, this can look like in the following image. 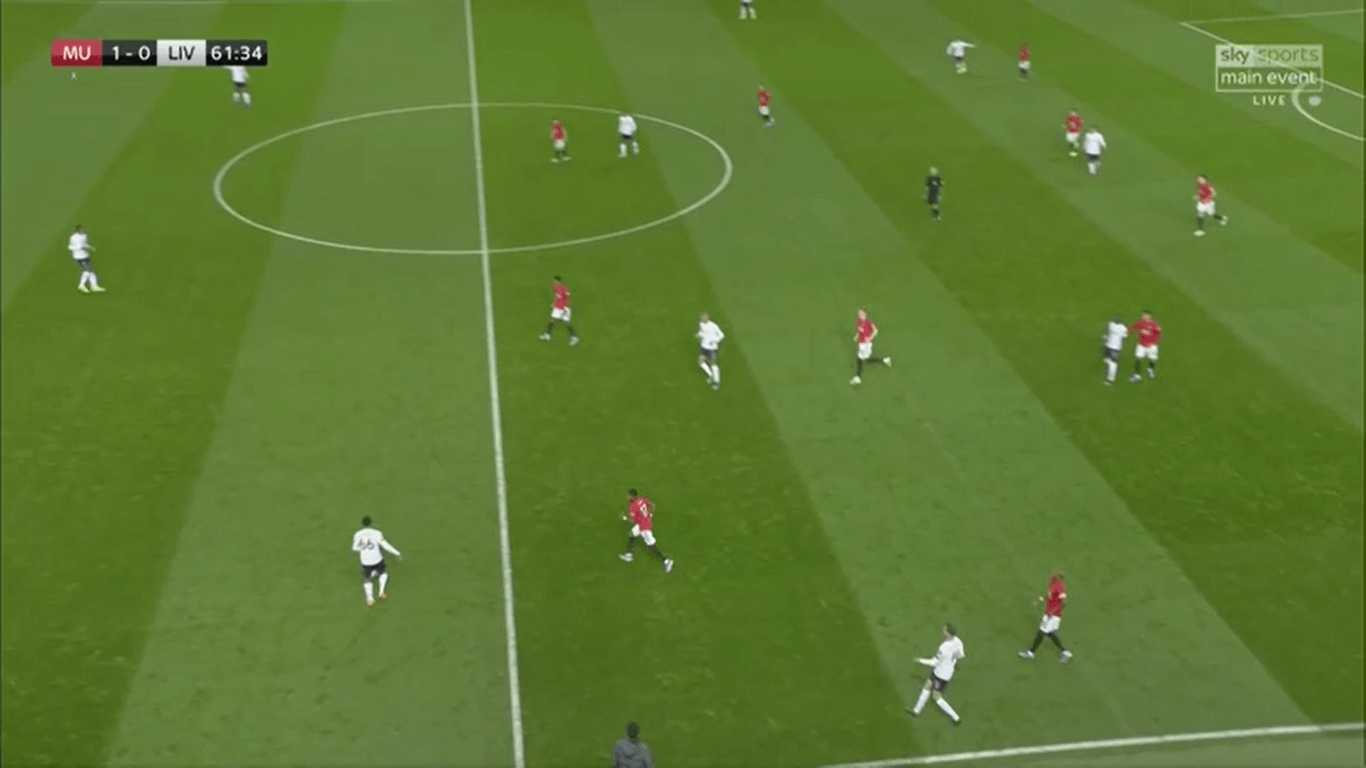 Here, every opponent in United’s half is marked tightly (except Robertson on the left attacking wing). This kind of energy and defensive discipline is surely needed if Manchester United want to win.

Last, but not least, a tactical masterpiece from José Mourinho last week should also be considered. While closing the centre may work against most teams, Liverpool are extremely dangerous through their full-backs as well. Mourinho’s idea to start with two right-backs and let them man-mark Robertson and Mané to completely shut down Liverpool’s left-wing worked fine. 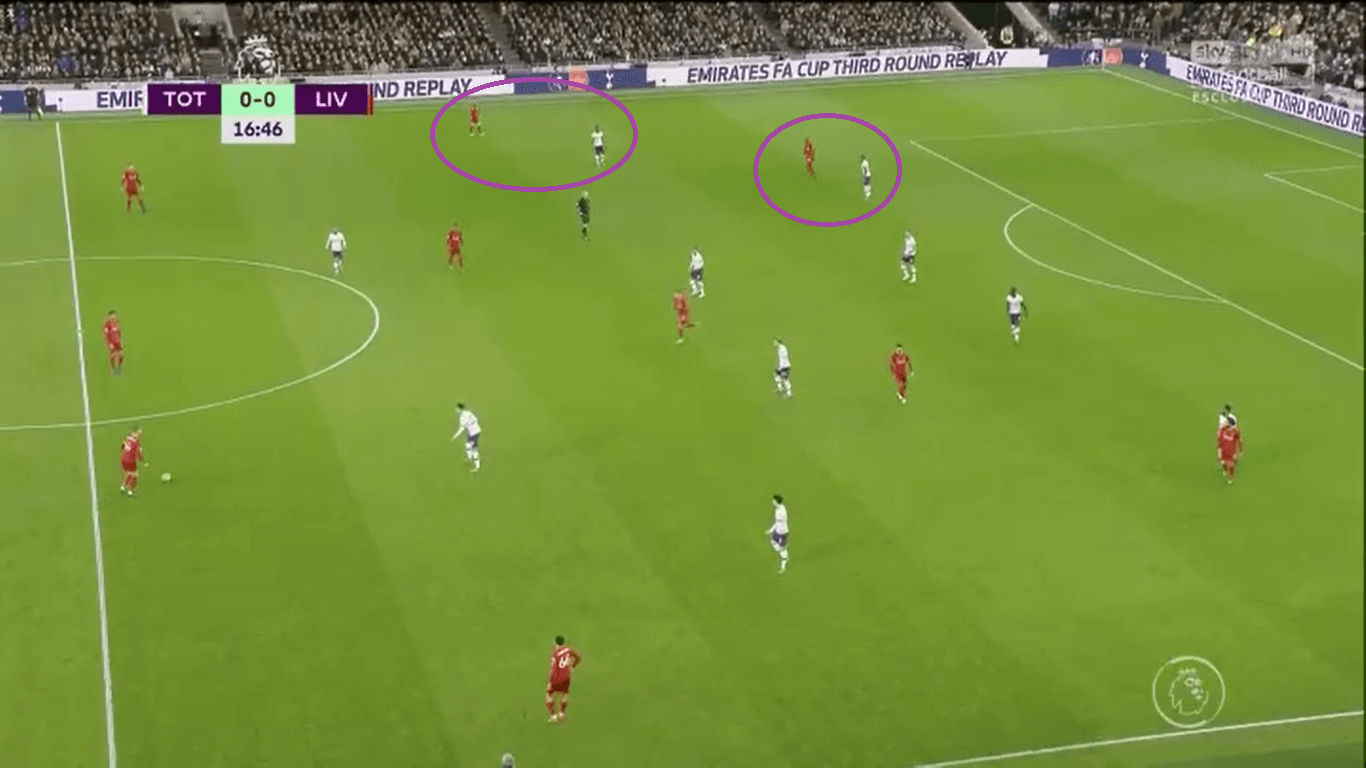 This could also be something to consider for Solskjær.

Assuming Rashford makes it to the game, both him and Martial will be incredibly dangerous threats for Liverpool. Even though Gomez and Van Dijk are quick, it will not be easy to defend against United’s two athletes.

Having a look back to October again, there were some situation like the following one. 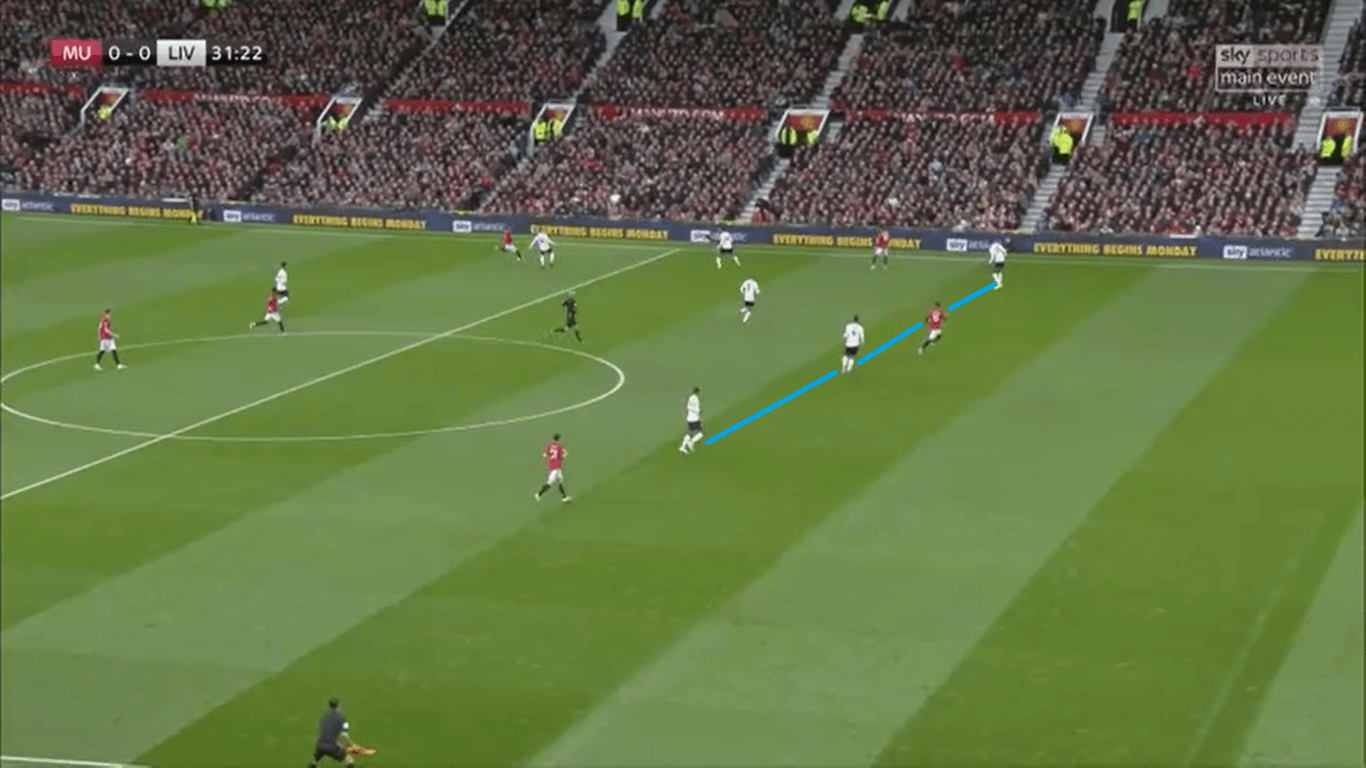 Whenever possible, United tried to play a long ball in behind the backline. Martial and Rashford could be caught offside from time to time, but what if they do not?

Also, Rashford showed in the last couple of weeks that he is able to play through passes as well, like in the image below where he plays a great ball to James. This additional threat makes it even more difficult for Liverpool, but it also shows how important it will be that Rashford is able to play. 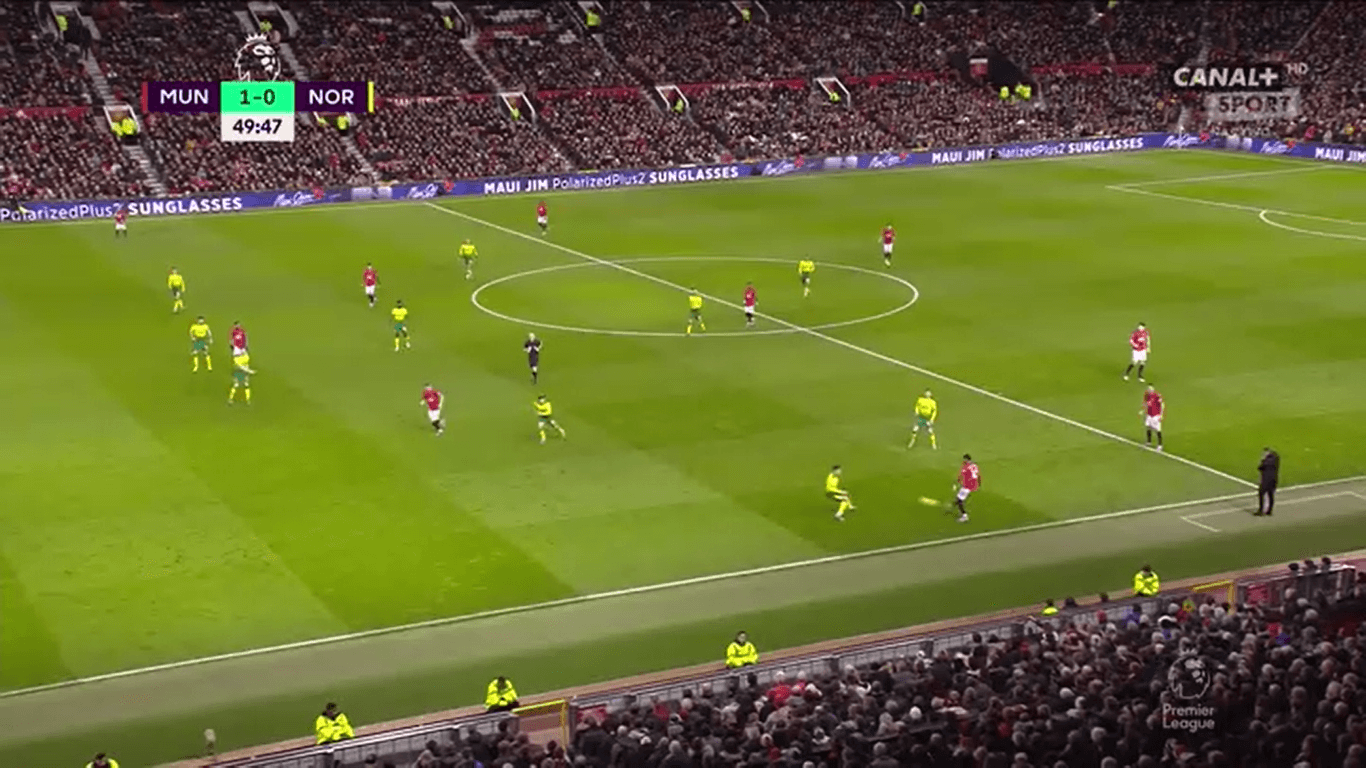 Liverpool are the favourites in this matchup. Our tactical analysis shows what makes them so dangerous for their opponents. However, we have also seen that United are able to find ways to defend properly. As a plus, De Gea has also the potential to win a game entirely on his own. Most likely, we will see United defending deep and trying to score through counter-attacks. Offensively, a lot depends on whether Marcus Rashford recovers or not. If he is able to start the game and feels fine, everything is possible.