The defensive midfielder is that one role in football that is often underappreciated. The emergence of players like N’Golo Kanté of Chelsea and Casemiro of Real Madrid has brought some recognition to the position. However, being the last man to guard the defensive line and being responsible to not only make recoveries but also to control the game when in possession requires a lot of experience and a strong mentality. In this scout report, we will be looking at Eduardo Camavinga, the 18-year-old French starlet who has been doing exceptional work for the Ligue 1 side.

In this tactical analysis, we’ll be looking at his style of play, his tactics and what makes him stand out at such a young age. Throughout the analysis, we will be marking Camavinga in red and others in grey in all the data visualisations used. 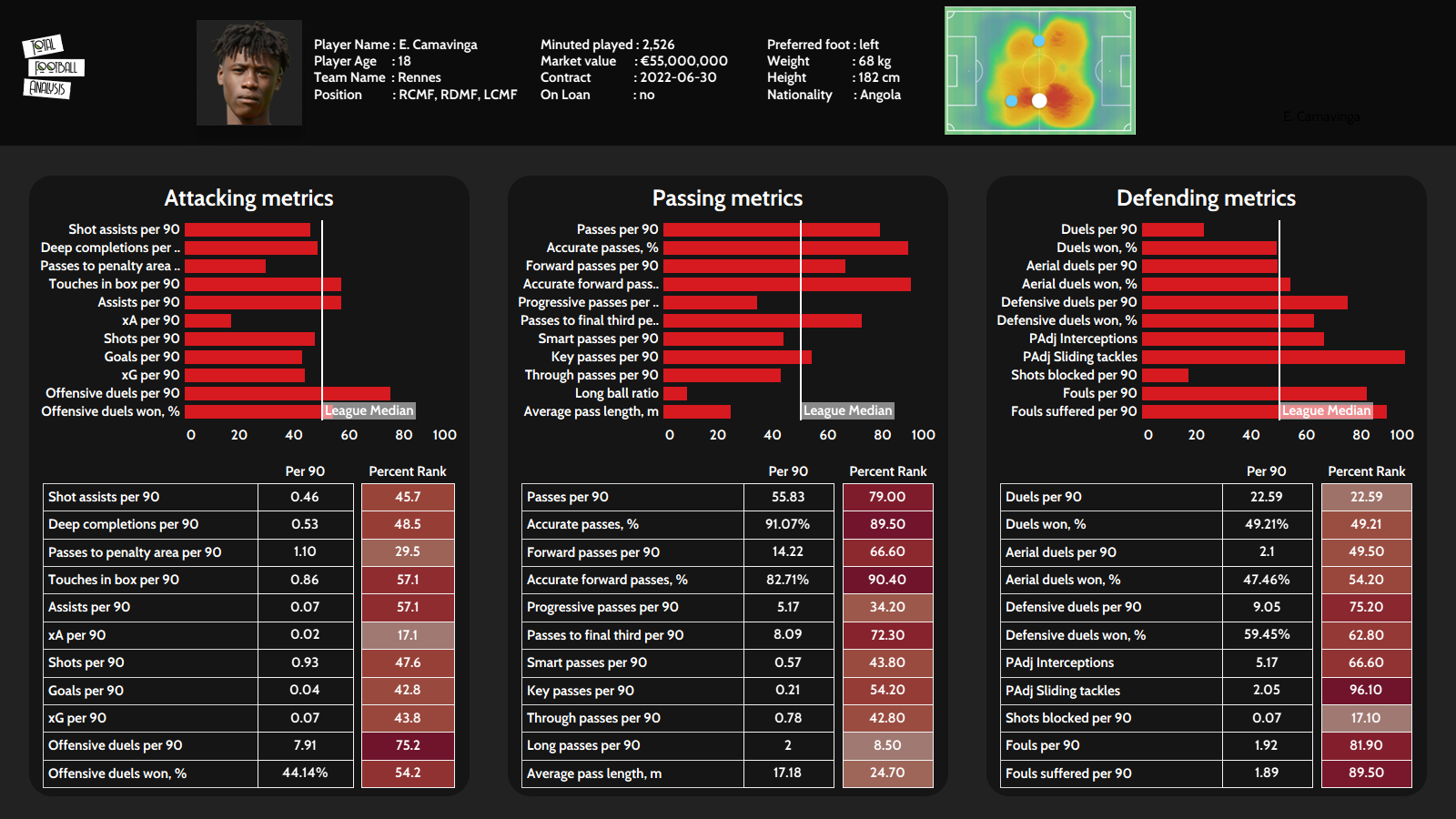 Camavinga, who came through the youth ranks of Rennes, made his first-team appearance in the year 2019 and also went on to make his first international appearance for France in the year 2020. He’s adapted to a role of ‘6’ but is also capable of playing as an ‘8’. Versatility is the accurate word to define his play style. Looking at his heatmap from the player profile, we can see his preferred areas of operation which pretty much explains that the player plays a box-to-box midfielder role.

He’s the kind of player who looks to hold on to possession and distributes passes wisely while being picky with his options. Upon looking at the percentiles for his passing metrics one can see his numbers are low in attacking metrics. Although the player looks thin, Camavinga is a physically imposing player who loves to make recoveries. He also manages to time his tackles very well.

One should not forget his off-the-ball movements as these runs create space for his teammates to exploit and take advantage of such situations.

As mentioned above, Camavinga looks to choose his options wisely and prefers to hold on to the ball and as a result, he accomplishes a pass accuracy of 91.07%. 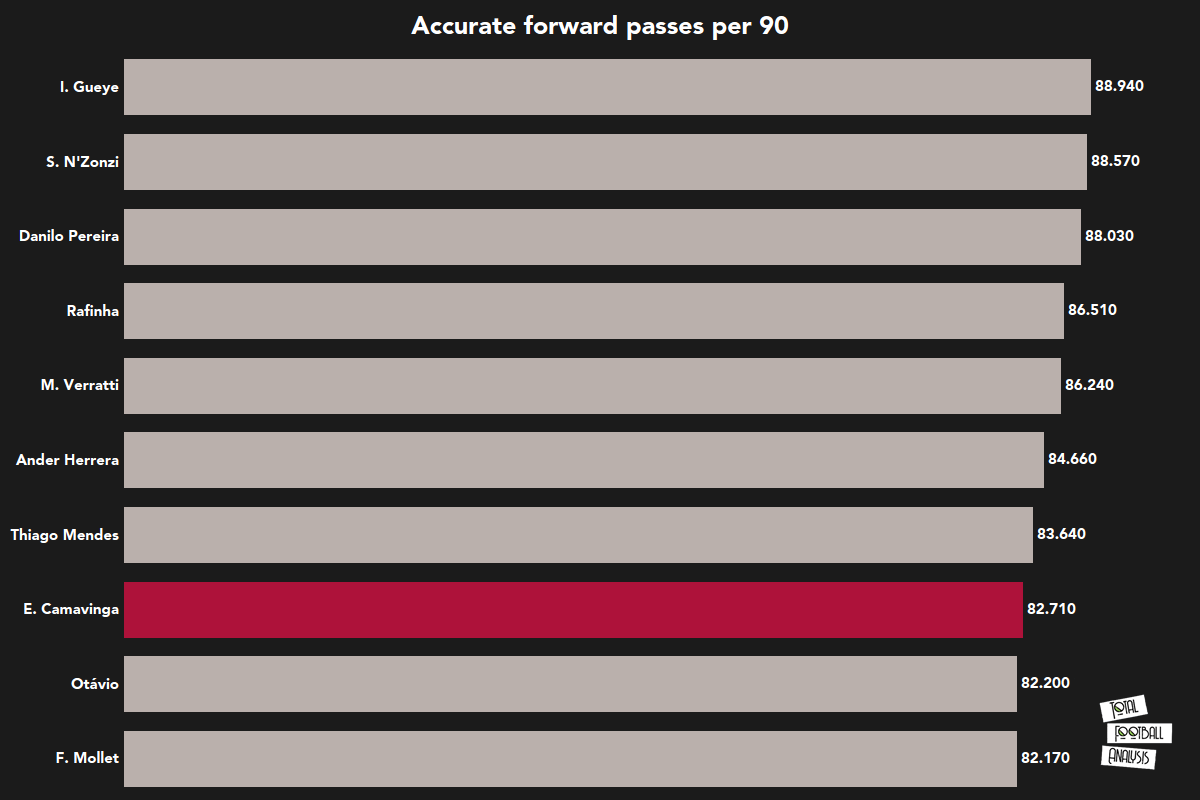 Jumping further into analysing his passes, we can see he ranks eighth (82.71%) when it comes to the percentage of accurate forward passes. This further explains his distribution. Now when all these numbers seem like something that any player can do, which is to play safe, in what exactly does Camavinga stand out?

He stands out in his decision-making, which is very strong. When we earlier mentioned that he’s picky with his passes, this is exactly what we meant. If Camavinga doesn’t believe that the pass he will attempt will reach the receiver he won’t attempt it at all. 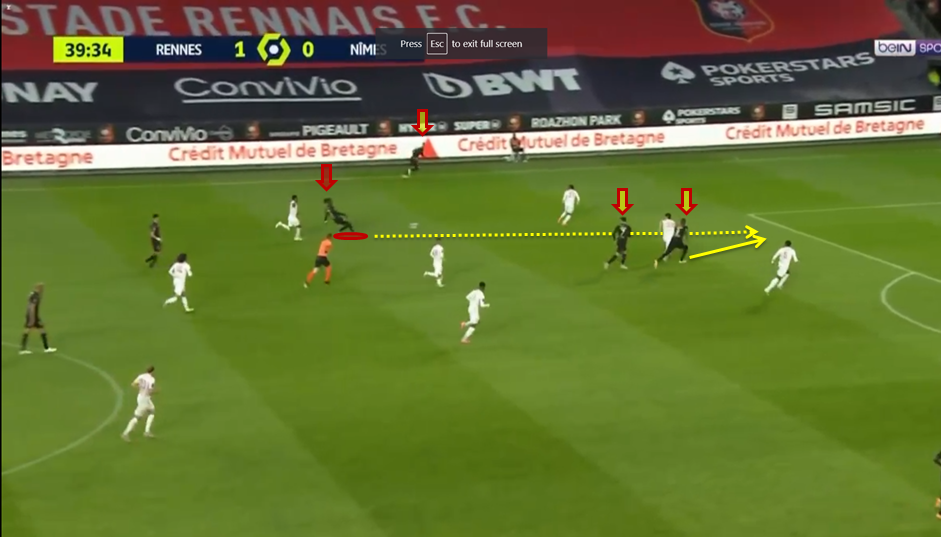 The image above is an example that will prove our point. Camavinga pretty much has three options in front of him – one on the left and two others in front with the one in front making a run into the open space. Camavinga could have opted to pass it to the flanks which would have been a safer option but instead he chose to pass it through the gap between the defenders only because the player was convinced that it was a possible opportunity and that he could make his pass reach the player without an interception.

This is one of the main traits of a playmaker. Since Camavinga is responsible to set the tempo and for distribution, he’s matured enough to dictate the game and bring the most out of the possession they have.

Apart from his decision-making, one should also give him credit for finding the receiver in tight spaces. His weight of the passes is so good that it exactly falls right at the foot of the receiver. His technical ability on the ball has been outstanding and so is his decision making. Plus, he’s quick to decide and release the ball when he sees a target. 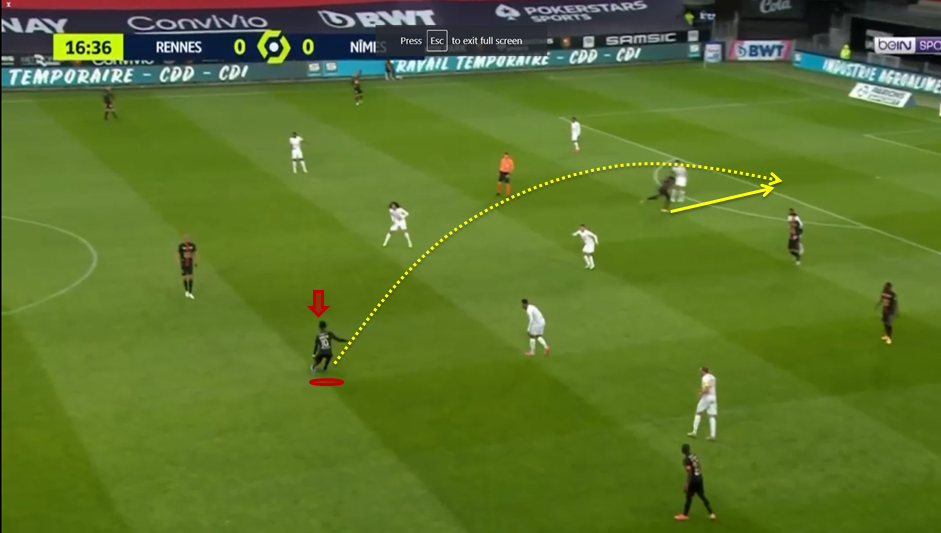 Upon noticing the run by the striker, Camavinga is spontaneous enough to decide whether a long pass is feasible and is quick to release the ball. The fact that the pass acknowledges the runner and perfectly meets the timing and falls right at his feet after the release shows the quality of the 18-year-old player.

Camavinga has pretty much mastered his decision-making ability which complements his technical ability on the ball and being able to find who he wants to find at the time of passing. This surely is one of the greatest assets that the youngster possesses.

When building up from the back, Camavinga plays a crucial role by helping the team to bypass the high press. By constantly moving he creates space for himself and for his teammates to pass into. 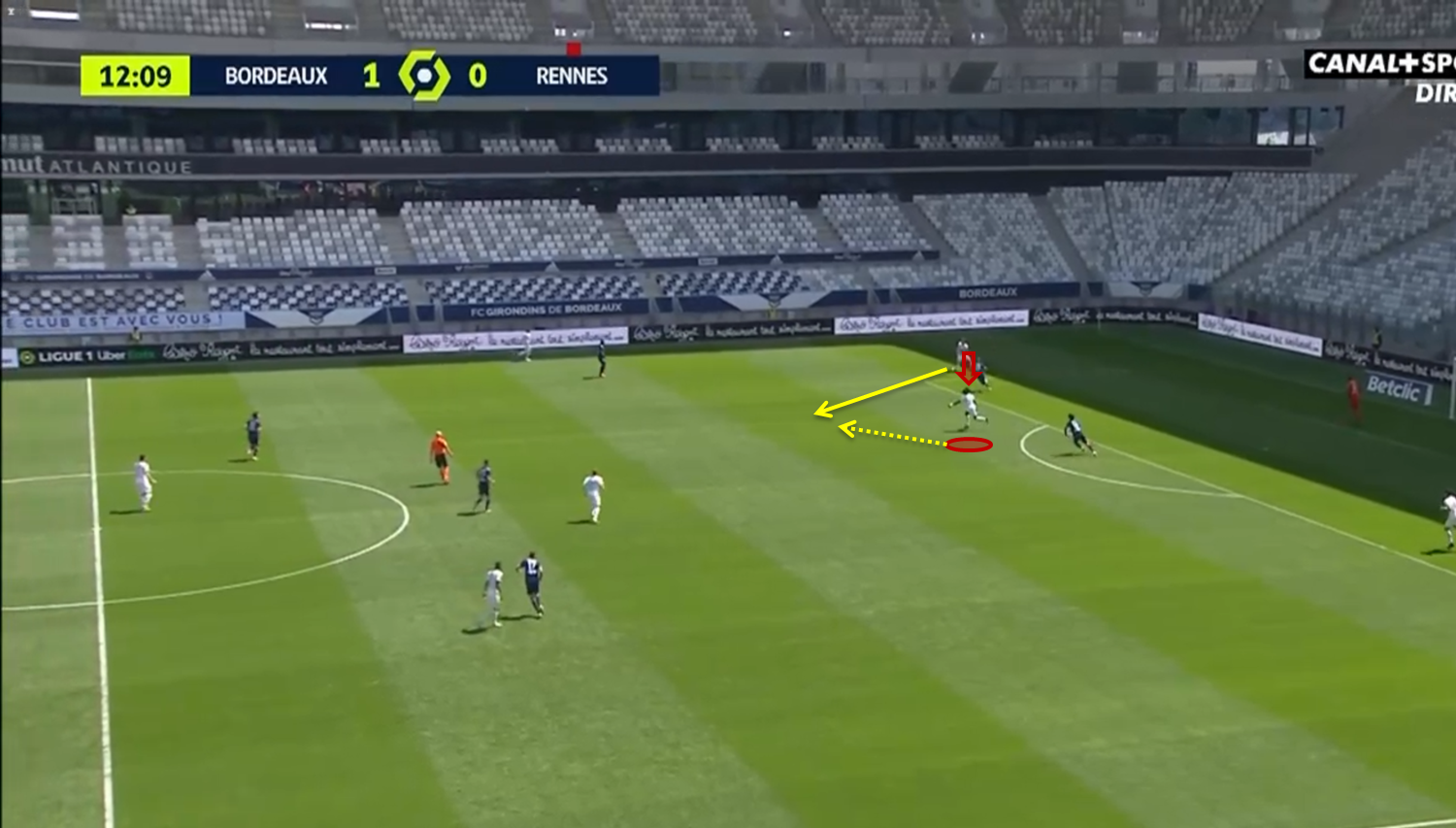 In the picture, we can see that Camavinga is moving into space to receive the ball from his defender and he’s also being tagged by an opponent. It’s important to know that this space was created by him for himself. His way of avoiding an opponent and creating space is to convince the opponent that he’s going to do something and do the exact opposite. In the last picture, Camavinga chose to turn to his left which was unexpected for the opponent and ended up creating a gap between the two players.

He is also intelligent to act as a decoy with his off-the-ball movements. 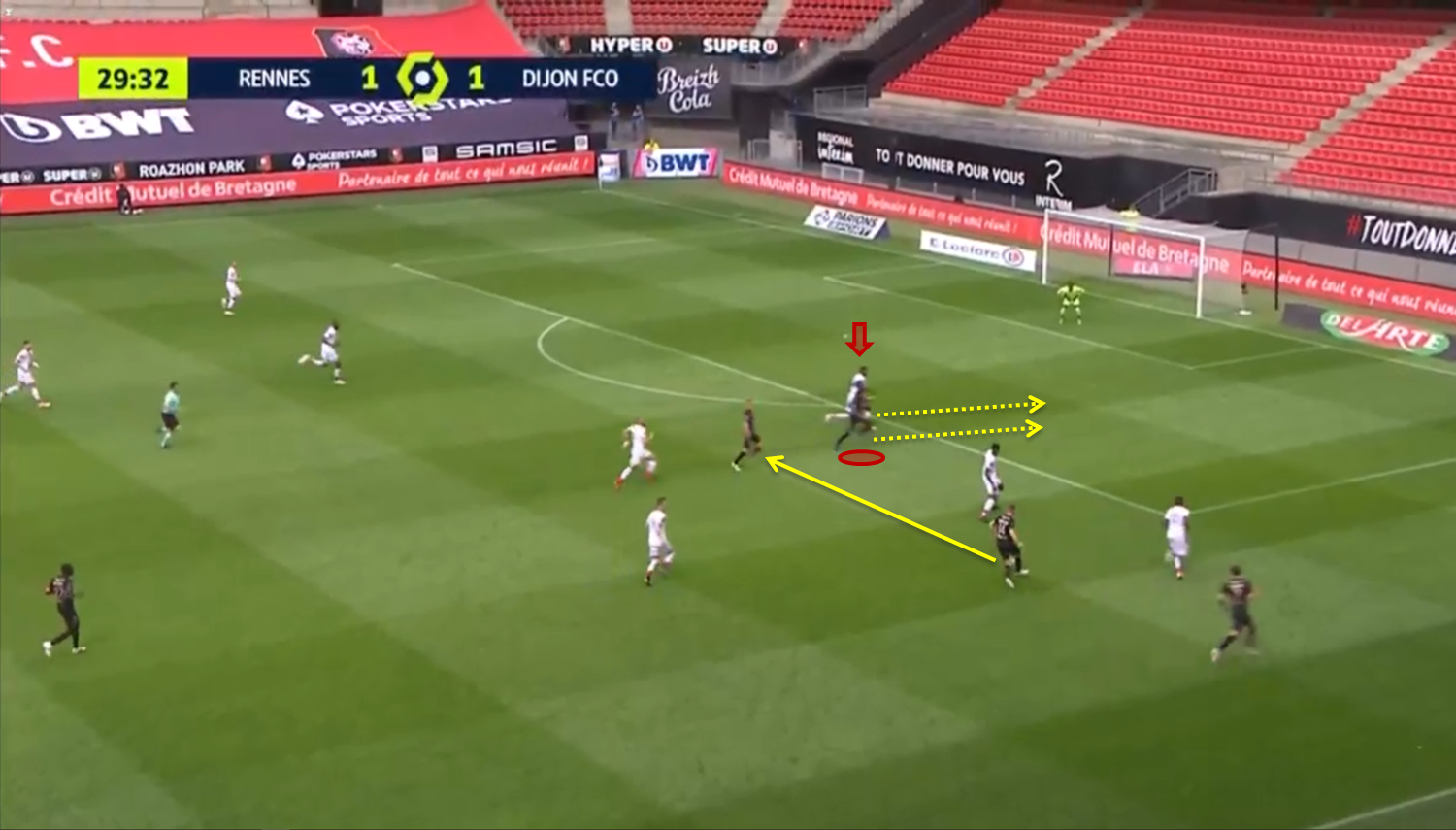 Upon looking at the match image, we can see Camavinga sprinting into the penalty area attracting a defender with him. As a result, this creates enormous space for his teammate to exploit. This way of attracting players and creating space is something that Camavinga does effortlessly and is something that can also be noticed in the build-up. When there’s no space to progress, he moves around dragging opponents with him to create space for others to occupy.

Since the player is very good with his footwork and a very good dribbler of the ball, these runs in the attacking third also act as an opportunity for him to score. This is exactly what makes him even more dangerous as the opponents shouldn’t ignore his runs since they could create space for his teammates or could lead to a goal-scoring opportunity. 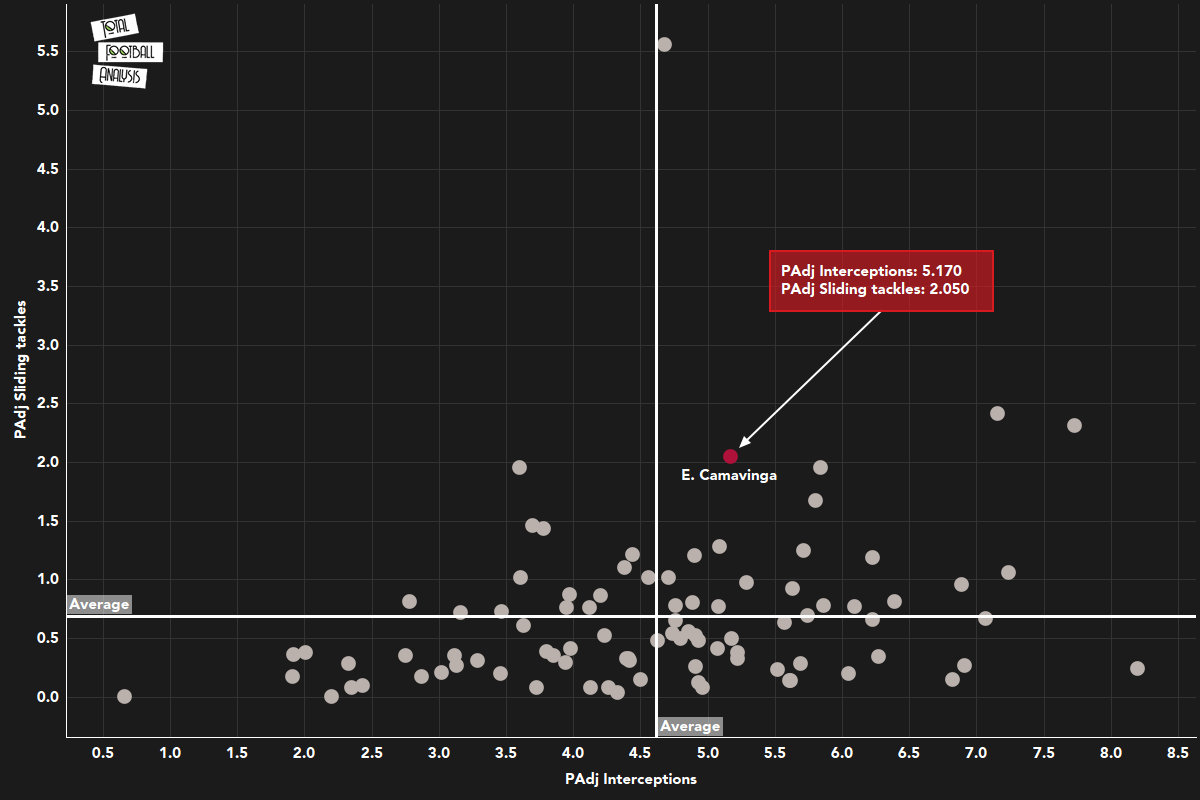 Camavinga is also known for his ball recoveries. From the scatter plot one can see that he’s pretty much positioned above average in both PAdj Interception and PAdj sliding tackles. In fact, his 2.05 sliding tackles per 90 is among the top four, indicating how much he likes to make recoveries.

The key to his recoveries is that he is fast and is good in anticipating passes and gives no time for the opponent to react. As much as 53.5% percentage of his recoveries come in opposition’s half, explaining his importance in the team. 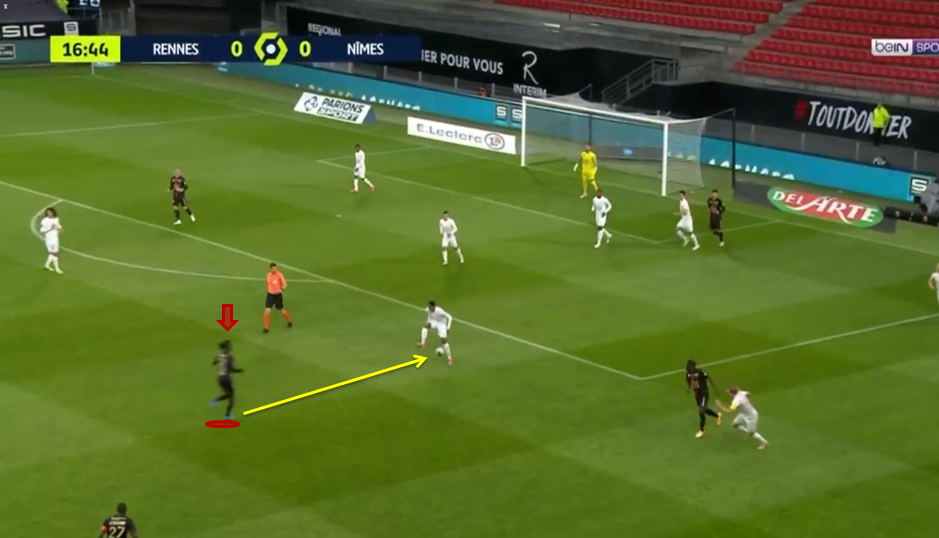 In the last image, we can see a player is about to receive the ball and Camavinga is already sprinting towards him to close him down. Now this puts the player under immense pressure as he has to focus on receiving the ball and also needs to find the next option quickly. If he takes his eye off the ball and searches for an option then there’s a chance that he could mess up his reception. If he focuses on receiving and then decides to look for options then it probably could be too late as Camavinga would have closed him down by them.

This ability to put pressure on the opponents has helped him make some decisive and key tackles to save his team. The fact that he never gets tired and constantly keeps running to help the team in all four phases of the game is what helps him stand out and makes him a team player.

It really wouldn’t be surprising to see him join a European giant in the near future. It’ll be interesting to see how the player is able to adapt to the requirements of the new team. As mentioned earlier, Camavinga is someone who can handle pressure easily so it shouldn’t be a problem for him to adapt.

But what I’m looking forward to seeing is how he improves as a whole. If he joins a team that enjoys more possession than Rennes, it could be expected from him to attempt a lot more attacking passes than before. Given the quality the player possesses in terms of his distribution, he could play a vital role to constantly split the opponent’s defence. There’s no doubt that Camavinga has one of the brightest futures among the young players. How he develops from here is something that only time can answer!