With the start of the 2020/21 UEFA Nations League fast approaching, and with England’s recent squad announcement, now is the ideal chance to evaluate their best options in the goalkeeping area. Much scrutiny has been put on their current number one, Jordan Pickford, so it will be interesting to see whether Gareth Southgate will stick with him. Goalkeepers appear to be picked more on reputation rather than form.

This data analysis will look at relevant data in the most relevant areas to decide who England’s top three goalkeepers should be. We’ll pick the top three as this is the amount usually taken to a major tournament. We will use shot-stopping, sweeping, and passing statistics to firstly compare the best English goalkeepers, and secondly to compare them with other goalkeepers within the top five leagues. For the sample of English goalkeepers, we have included those playing in top-flight leagues and who have played at least 1,500 minutes of football during the 2019/20 season. This will give us a sample of realistic candidates who have played enough to analyse.

How have England goalkeepers performed recently? 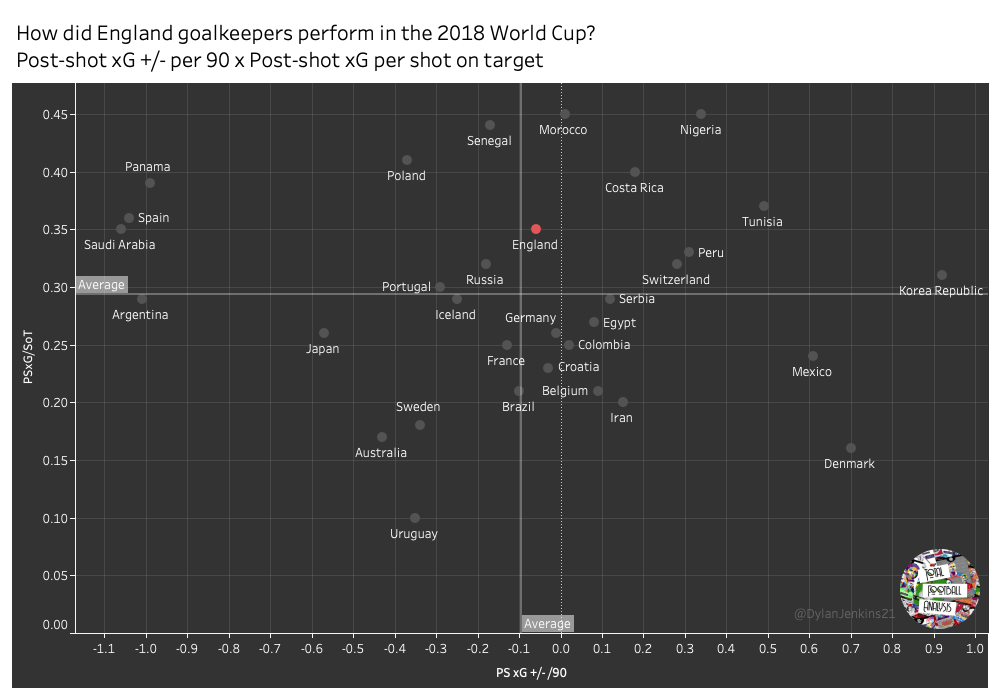 The above graph shows how well each country’s goalkeepers performed during the most recent international tournament. PS xG /SoT measures the average difficulty of shots faced whilst PS xG +/- per 90 measures how often that team’s goalkeeper saves said shots. So, teams in the top right quadrant faced more complicated shots and saved more than they were expected to. Although England had a PS xG +/- per 90 value of -0.06, this was still above the competition average. England’s goalkeeping performance during the most recent international tournament was just above average.

Jordan Pickford played all games for England during the 2018 FIFA World Cup. We can now analyse who is best suited to be their number one in the upcoming games and tournaments. 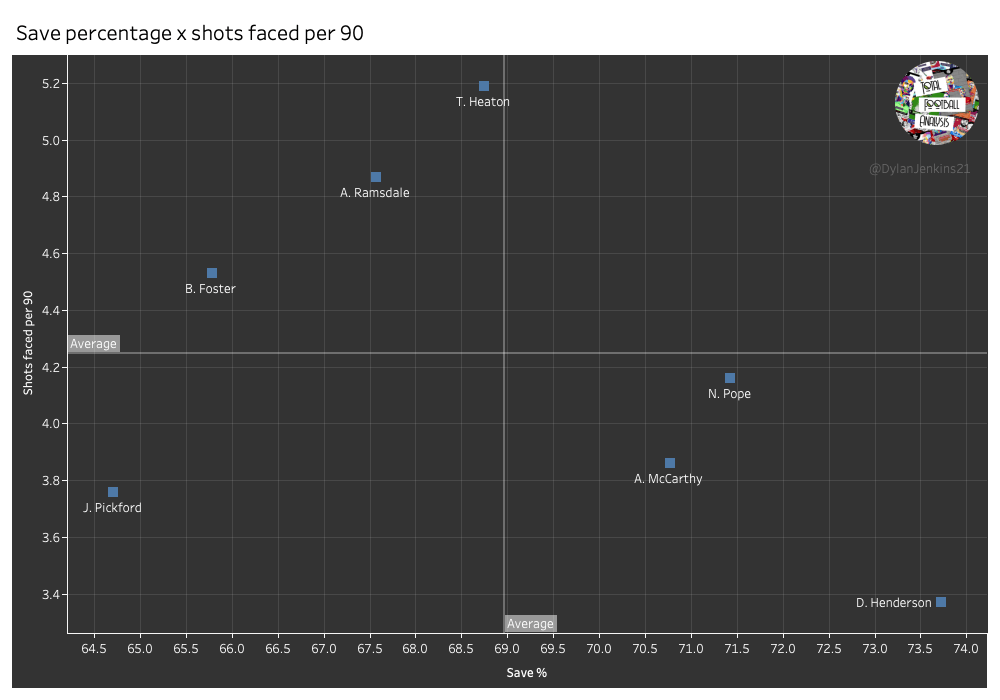 Manchester United’s Dean Henderson has by far the greatest save percentage with 73.72% but he’s also faced the fewest amount of shots, 3.37. The 23-year-old enjoyed two very successful consecutive seasons with Sheffield United. First gaining promotion to the Premier League, and secondly helping his team to a ninth-place finish.

On the other side of the graph, England’s current number one, Jordan Pickford, is the worst performer. The 26-year-old had a very disappointing campaign with Everton in the 2019/20 season. Pickford only faces 3.76 shots per 90 but has the lowest save percentage within this sample, 64.71%. Not a great showing for the former Sunderland man.

Burnley’s Nick Pope and Southampton’s Alex McCarthy are the other two that impress here. Pope faces more shots per 90 (4.16) and has a higher save percentage of 71.43%. Whilst McCarthy has had a great season with Southampton, facing 3.86 shots per 90 and saving 70.77% of these.

The other three goalkeepers all face above-average shots per 90 and have a below-average save percentage. The next graph will analyse these seven keepers with more in-depth statistics. 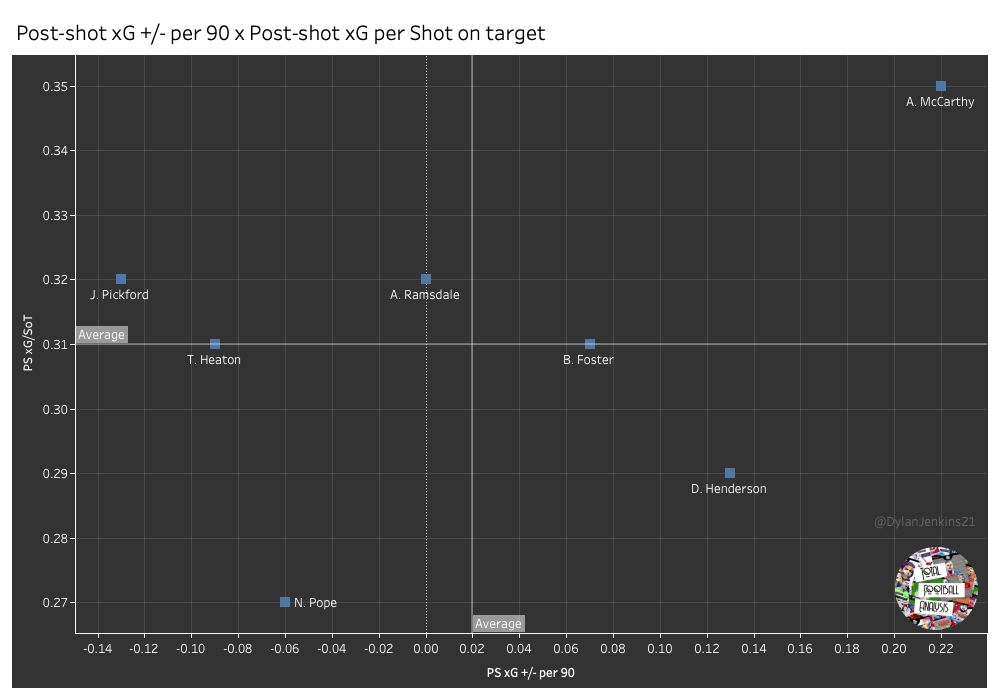 The above graph uses the same metrics as the international team graph, it measures the difficulty of the average shot faced and how many goals they have saved above/under what they were expected to.

McCarthy is by far the best performer here. He faces the most challenging shots with a PS xG/SoT value of 0.35 and has managed to save 0.22 more goals per 90 than expected. Proving that the 30-year-old was one of the best performing goalkeepers in the Premier League this season.

Watford’s Ben Foster, at the grand age of 37, also appears in the top right quadrant of the graph. Foster faces the average difficulty of shots (0.31), and he saves more shots than he is expected to. He manages to save 0.07 more goals than he should per 90. In the end, Foster had a disappointing season with Watford, being relegated to the championship. But the Premier League veteran was one of their standout players.

Surprisingly, Pope doesn’t show up too well here. He faces the least difficult shots, on average, but still has a PS xG +/- per 90 value of -0.06. However, this may be because he plays for a defensively solid team, as Burnley are. The mistakes that he makes have a bigger impact on his statistics.

All other keepers appear in the top left quadrant again.

With better teams, much like England, often playing higher defensive lines and playing offside traps, it is important for a goalkeeper to be able to sweep up behind their defence. A good starting position, as well as a willingness to sweep up, will prevent attackers from getting in behind the high line.

The first graph will measure how active each English goalkeeper is off their goal-line. 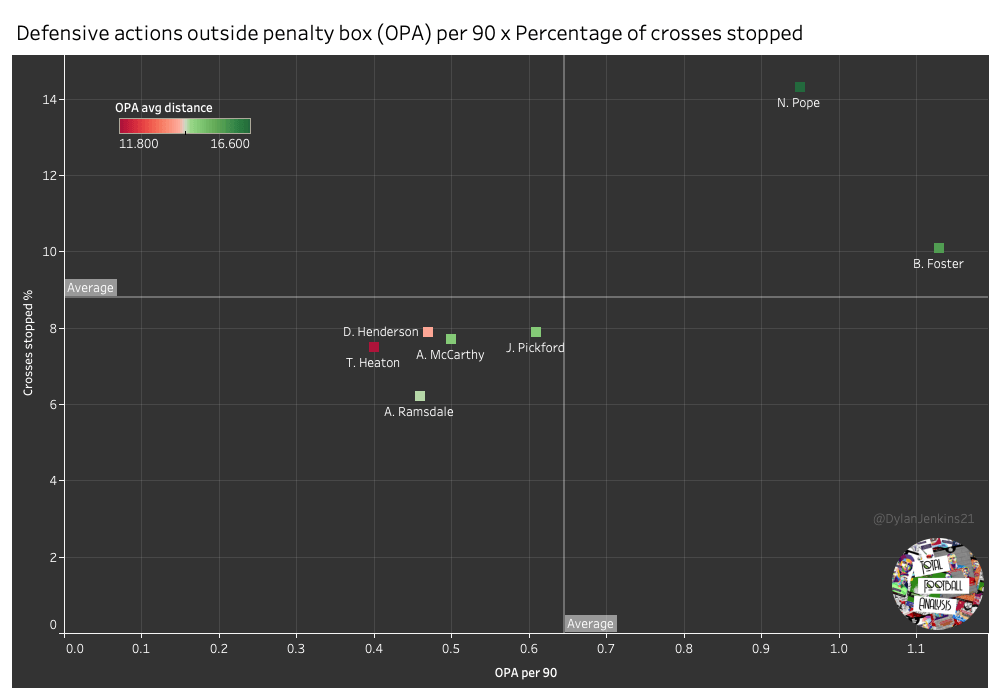 The above graph uses defensive actions outside the penalty box per 90 (OPAs) against the percentage of crosses they have stopped to compare their sweeping abilities. The colour of each marker indicates the average distance of their OPA.

Two keepers stand out here. Foster is one of these. With Watford’s weak defence, the 37-year-old was often left with no choice other than to leave him penalty box to recover the ball, hence the fact he has the most OPAs per 90 with 1.13. He also stops more crosses than average with 10.1%. The second player that stands out is Pope. Whilst the 28-year-old had mixed stats with his shot-stopping, he is certainly one of the better sweeper-keepers. He has above-average stats in both areas, which includes the highest percentage of crosses stopped. He stops 14.3% of crosses that are delivered into his box whilst completing 0.95 OPAs per 90 with an average distance of 16.6m.

The remaining five keepers all have pretty similar stats with Pickford being the only one that has better stats. The Everton man has 0.61 OPAs per 90 with an average distance of 14.7m, and he’s also stopped 7.9% of crosses he’s faced.

The following graph will measure actions closer to the goal, and aerial duels prevent attackers from heading the ball whilst exits are used to close down attackers before they have a shot on goal. 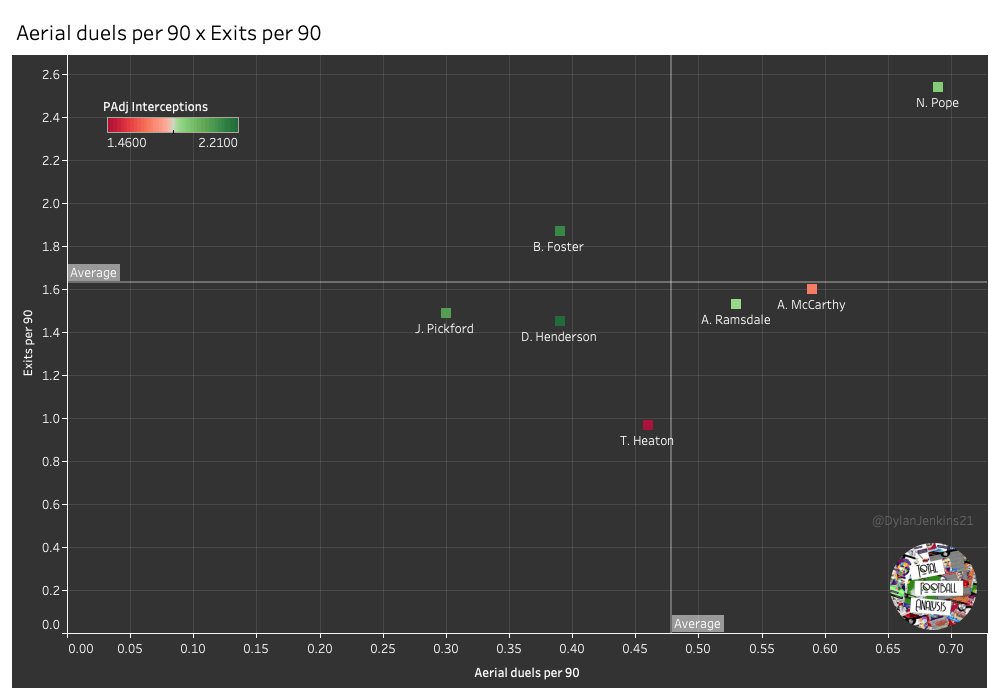 Once again, Pope stands out in the top right quadrant, meaning he has above-average stats in both categories. He makes 0.69 aerial duels per 90, winning 89.66% of these, he also performs 2.54 exits per 90 whilst making 1.91 possession adjusted interceptions.

Foster makes 1.87 exits per 90, which is higher than the average. He’s involved in 0.39 aerial duels per 90, winning 75%. Meanwhile, Henderson makes the most possession adjusted interceptions per 90 with 2.21.

Having a varied passing game is very important in the international game. A player’s national team may have a completely different style of play to their club. We will use each goalkeeper’s pass launch percentage to judge which of them is the best passer. 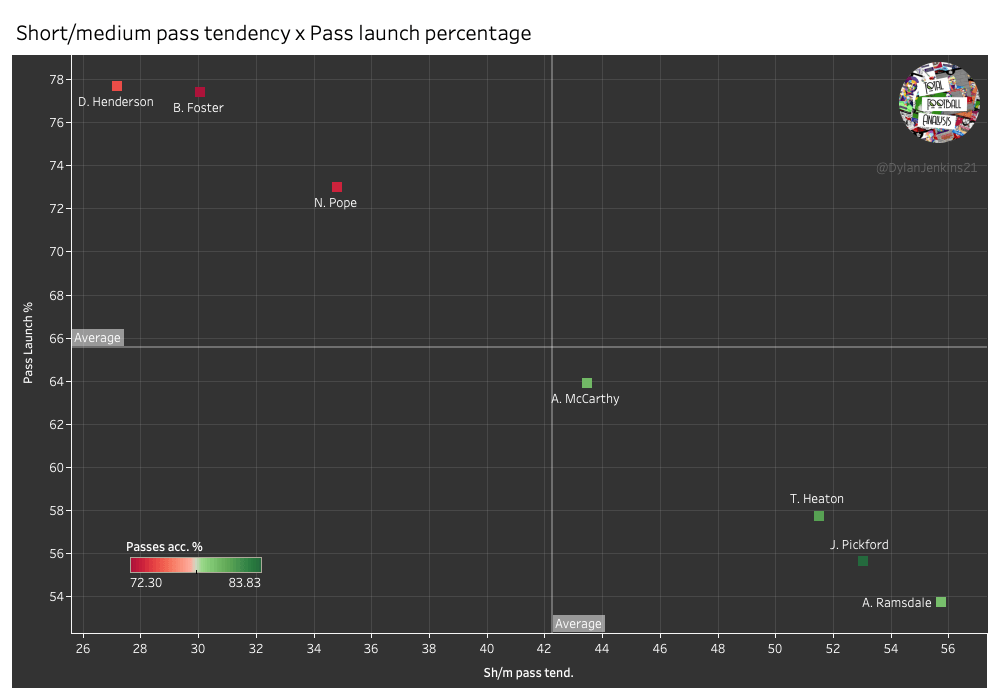 The above graph measures each goalkeepers likeliness to launch an in-play pass (a pass over 40 metres), and their tendency to play short or medium passes. The colour of each marker indicates the pass completion percentage.

Pickford has the highest pass accuracy with 83.83%, but he also has more of a tendency to pass short rather than long. The 26-year-old launches 55.60% of his in-play passes and 53.03% of his passes are either short or medium. The only player that has more of a tendency to play short in Ramsdale. The Sheffield United man only launches 53.70% of his passes and has a short/medium pass tendency of 55.74%. His pass accuracy is a fair bit lower than Pickford (79.80%).

Aston Villa’s Tom Heaton is closest to these two in terms of passing. The 34-year-old has been in and out of the team this season because of injury, but his passing tendencies have shone through. Heaton completes 81.23% of his passes, launching 57.70% of his passes.

McCarthy has the most varied passing style, appearing in the middle of the graph. He has a very respectable passing accuracy of 80.07% even though he launches 63.90% of his passes and passes short/medium 43.47% of the time. The Southampton man is clearly the most versatile player in terms of passing.

Pope, Henderson and Foster all prefer to go long, all with fairly poor pass accuracy.

Who are the best all-round performers?

So, looking at all areas analysed, we can decide on England’s top three goalkeepers. We can then compare them to the rest of Europe’s top five leagues to decide on the number one.

After analysing the standouts in all areas, McCarthy stands out most, performing well in four of the five graphs. This is followed by Pope who appears well in three. So these two are certain. Henderson and Foster appear above-average in two. Given both ages, 37 and 23, Henderson would be the most sensible choice.

According to the data, these are England’s best options for upcoming tournaments and games. Now let’s see how good they are in comparison to other keepers in the top five leagues.

How good are England’s goalkeepers? 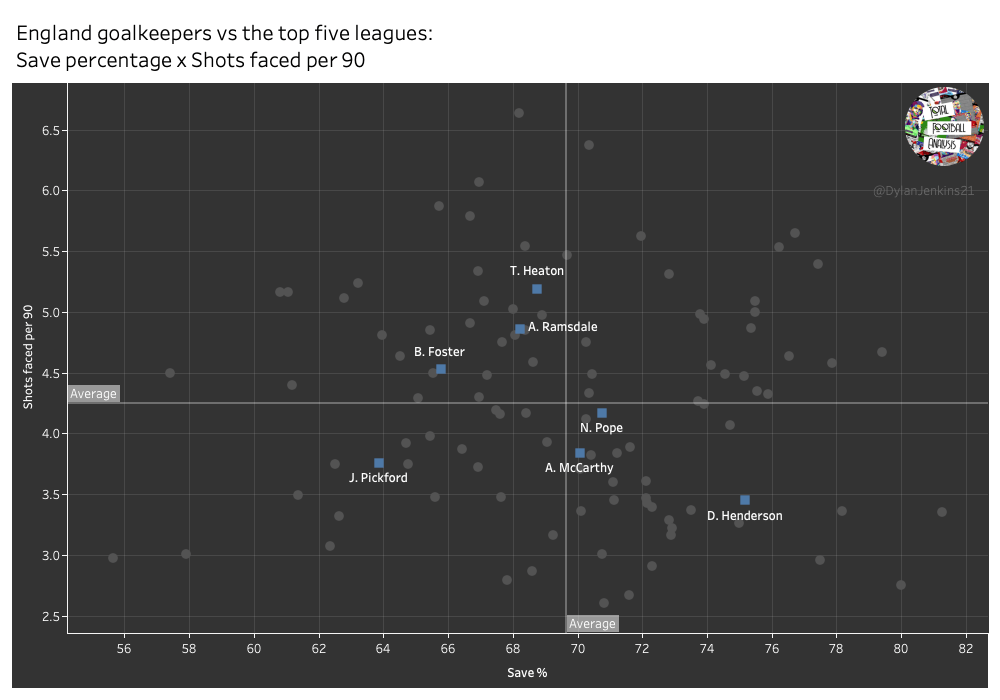 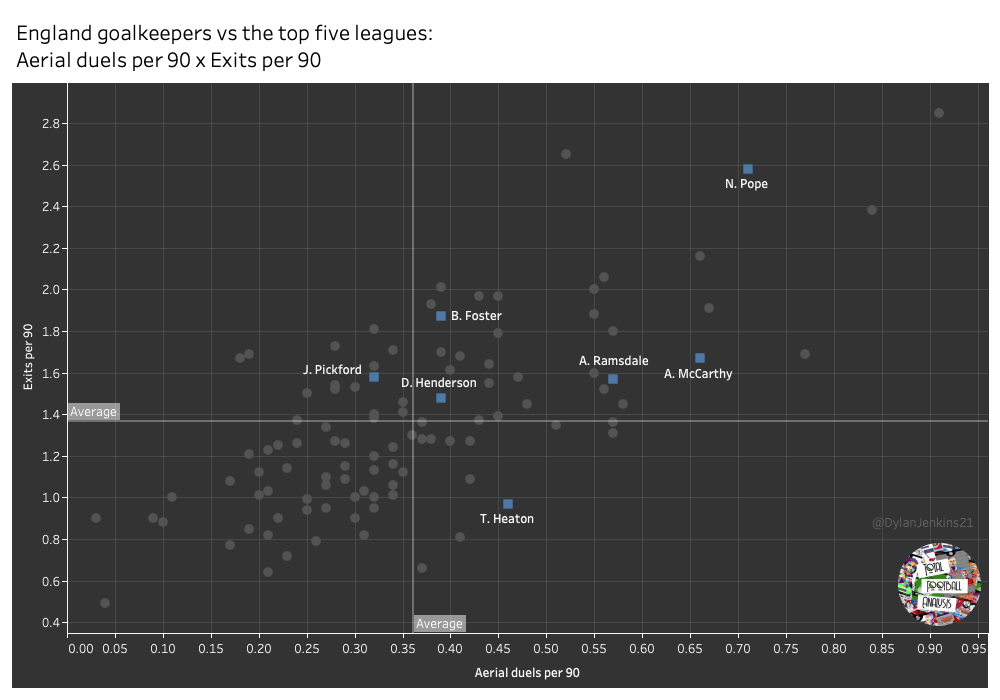 The above graph measures each goalkeeper’s sweeping abilities. When compared to the rest of Europe, Pope stands out as one of the best. The Burnley man is clearly very active off his line and likes to take the pressure off his defenders. McCarthy shows up well here too, and Henderson is just above-average in both areas. 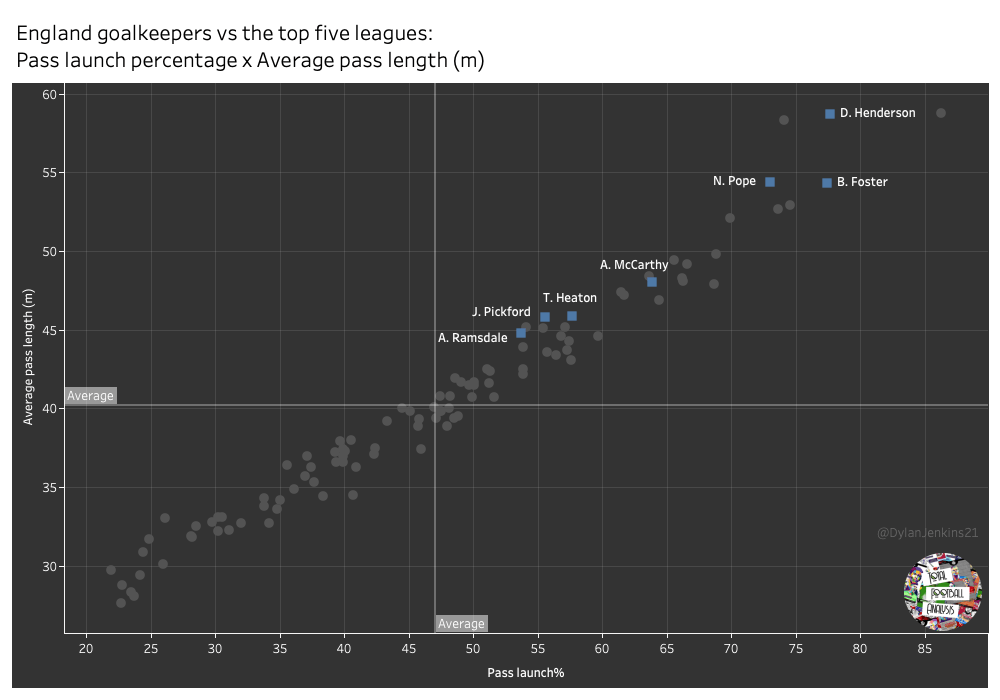 These stats often represent the team’s play-style. For example, Manchester City‘s Ederson and Barcelona‘s Marc-André ter Stegen rank at the bottom left of the graph.

As the three graphs above have shown, England’s goalkeepers do perform well when being compared to their peers in the top five leagues. 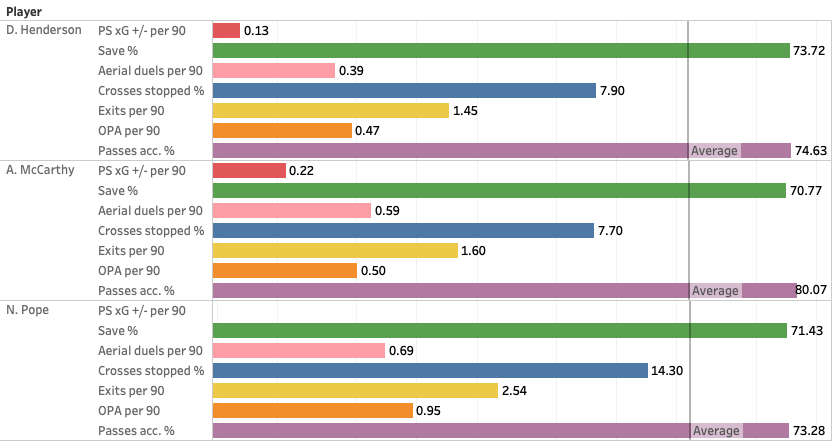 Third choice – Alex McCarthy. The Southampton man has been one of the most surprising performers in the 2019/20 season. In terms of PS xG +/- he ranks amongst the best in Europe. The 29-year-old, currently in his goalkeeping peak, has been a steady performer over the last three seasons with Southampton. But during the last campaign, he was a key part of his team’s incredible improvement. His lack of experience and age means that he may be overlooked by Southgate; however, shot-stopping wise, McCarthy has been the best English goalkeeper.

Second choice – Dean Henderson. Henderson was on loan at Sheffield United last season and what a season he had. For a newly promoted team, his goalkeeping stats are very impressive. The 23-year-old is currently in a tricky situation, however. Having returned to Manchester United, and signing a new long-term contract, his future seems uncertain. Will he look to battle David de Gea for the number one spot? Or will he look to be loaned out once again? His shot-stopping abilities are very good; however, he does struggle with his passing.

First choice – Nick Pope. The 28-year-old is a clear favourite for the number one spot. His form over the last two has been phenomenal. Although his form dipped last season, he has still been one of the top performers between the sticks. In the 2018/19 season, the Burnley man had a PS xG +/- value of 10.7, meaning he saved over 10 goals that he wasn’t expected to save. Pope is a very good shot-stopper and sweeper-keeper. He ranks among Europe’s best in terms of coming off his line. The only concern with Pope is his passing. With Burnley’s direct approach, he rarely needs to pass short or laterally.

This data analysis has proven that England is very lucky to have such a good, diverse range of goalkeepers. And to have seven playing in the English top division is a huge bonus. With the recent squad selection, Southgate appears as though Pickford is still his number one. After a disappointing few seasons and very average statistics, it may be a better option to find a replacement. Henderson, at just 23, has a very bright future ahead of him, but Pope’s consistency and experience would make for a better international goalkeeper.